Forced Labor Worker to the US 26-ID (Boleslaw Piatkowski)(PL)

Hürtgenwald – Victory Has Many Fathers, Defeat is an Orphan (Jandrew) 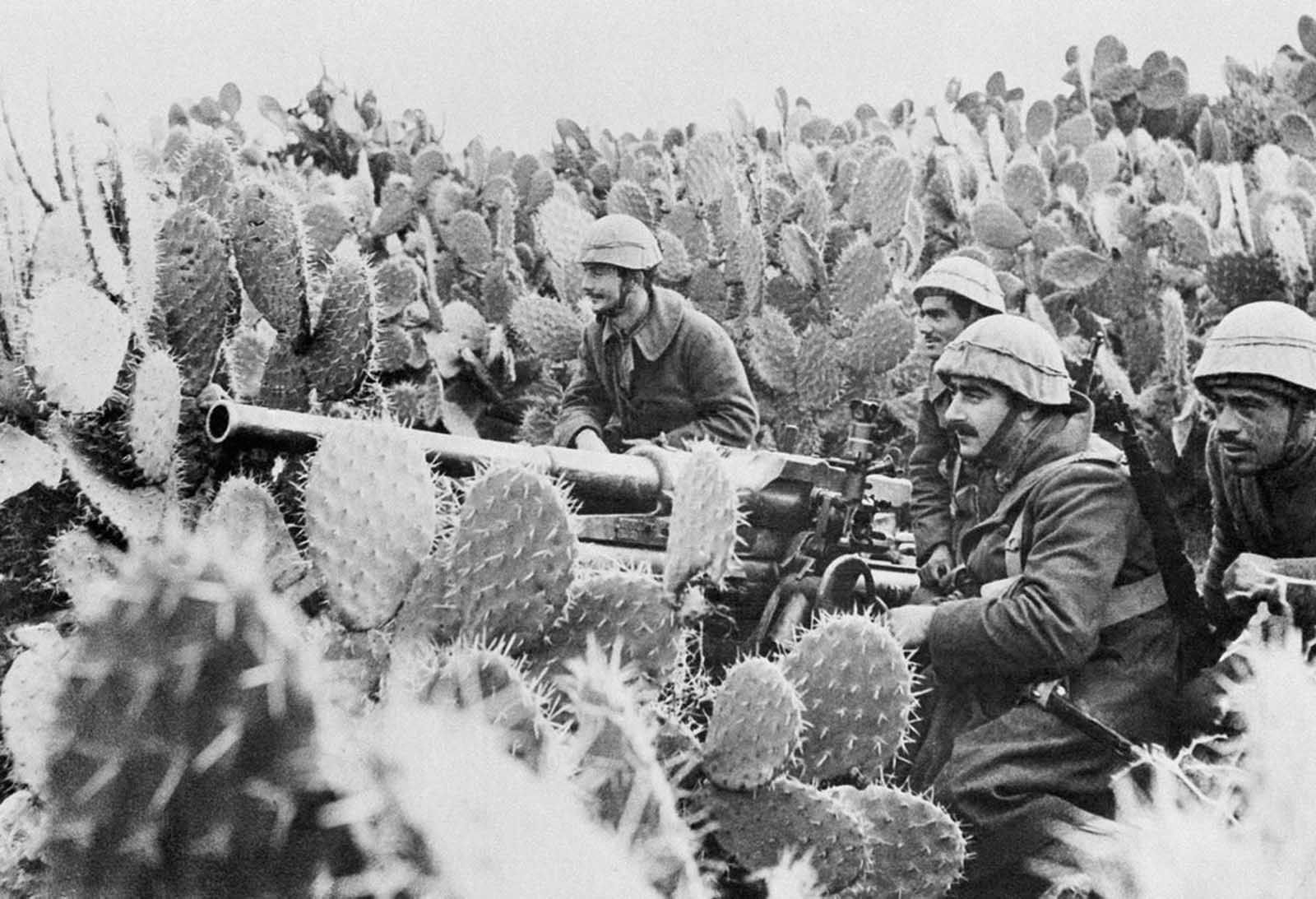 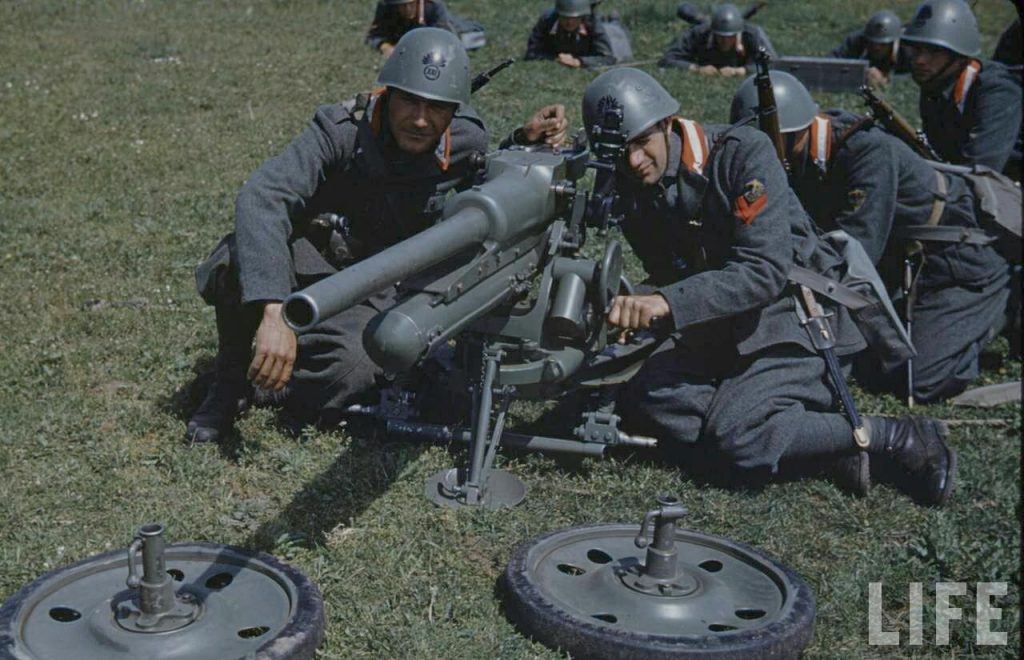 A. The Italian armed forces were faced with a conflict between theories of employment. They had historically been structured for deployment in the mountainous terrain found in Italy and her immediate neighbors. These forces were forced to adapt themselves to a colonial role, and, even more conflicting, to the ‘War of Rapid Decision’.
These theories mixed about as well as oil and water, and Italy lacked the industrial power and the raw materials to field forces able to meet all these needs. She even lacked the means to be a major power in a modern industrial war.

B. All Italy’s plans and preparations had been made for war against Germany/Austria, France, and Yugoslavia. Industry and trade had traditional ties with Britain, France, and the USA.

This was so prevalent that the geography section of the officer’s qualifying exam (tests before consideration for promotion) included the border areas with France, Switzerland, Austria, and Yugoslavia.
The characteristics of the armies of these nations were also covered. Africa was ignored. 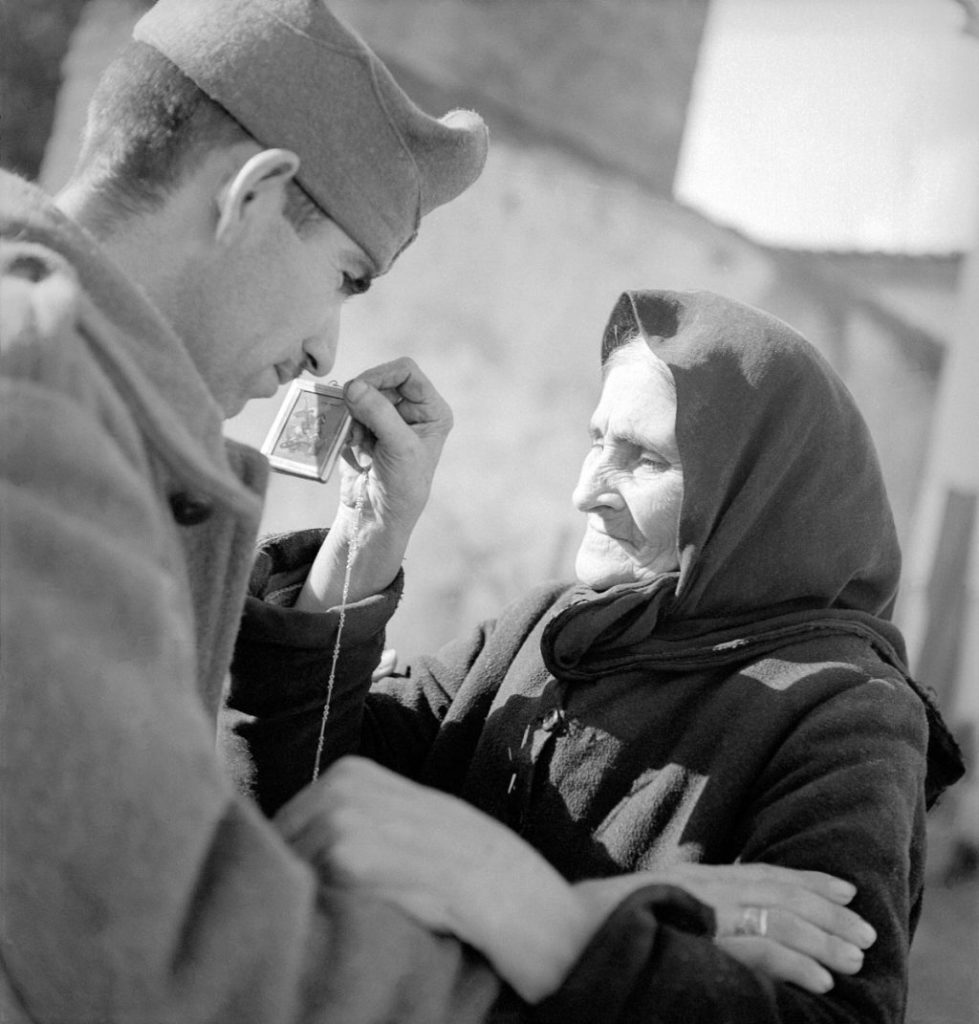 C. One faction of the army wanted an alpine-oriented army. In a 1937 conference on the future of armor, a ranking general said, The tank is a powerful tool, but let us not idolize it; let us reserve our reverence for the infantryman and the mule. This group saw Men, our indisputable resource, not machines. They came close to the philosophy of French Col. de Grandmaison and believed in mind over matter. This meant that the solution for any tactical problem was a mass of infantry.

A. General — A war of rapid decision was intended. Its chief features were supposed to be (1) Celere divisions, designed for exploitation and reconnaissance; (2) Tank brigades, designed for penetration, encirclement, and exploitation; (3) Motorized divisions, designed for rapid maneuver over a wide range and for the reinforcement of mechanized or fast-moving units. This new doctrine emphasized that surprise, speed, intensity, sustained action, and flexibility of plan allowing for unforeseen contingencies were the basic factors for a successful action.

B. Main Policies — To obtain the requirements for victory, the Italian combat effort was to become predicated upon the following policies (1) Enormously increased firepower; (2) Opposition to the hostile fire by combined fire and movement; (3) Direction of fire mass against the sector of 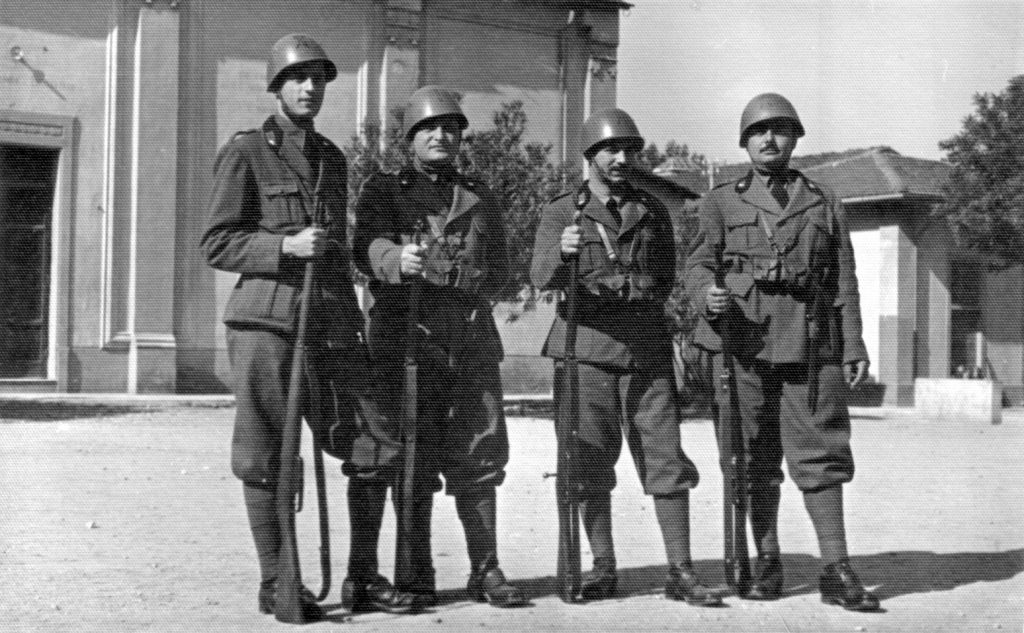 C. Comparison of doctrines — Italian doctrine denied maneuver at the division level and instead expected maneuver to be controlled by corps and armies.

This was even more unusual because great stress was placed on maneuvers and initiative by lower units. Earlier doctrine placed its trust in numbers. Doctrine proclaimed the absolute primacy of the infantry but did stress the necessity of infantry-artillery integration. Armor was envisioned as an infantry support weapon. Light tanks were to operate with horse cavalry squadrons.

The new idea of the decisive war, a war of maneuver using flanking attacks rather than a frontal assault, pointed toward major changes in the future.
The concept was one of rapid advance by truck or bicycle-borne infantry hordes, backed by road-bound artillery and 3.5-ton tankettes. 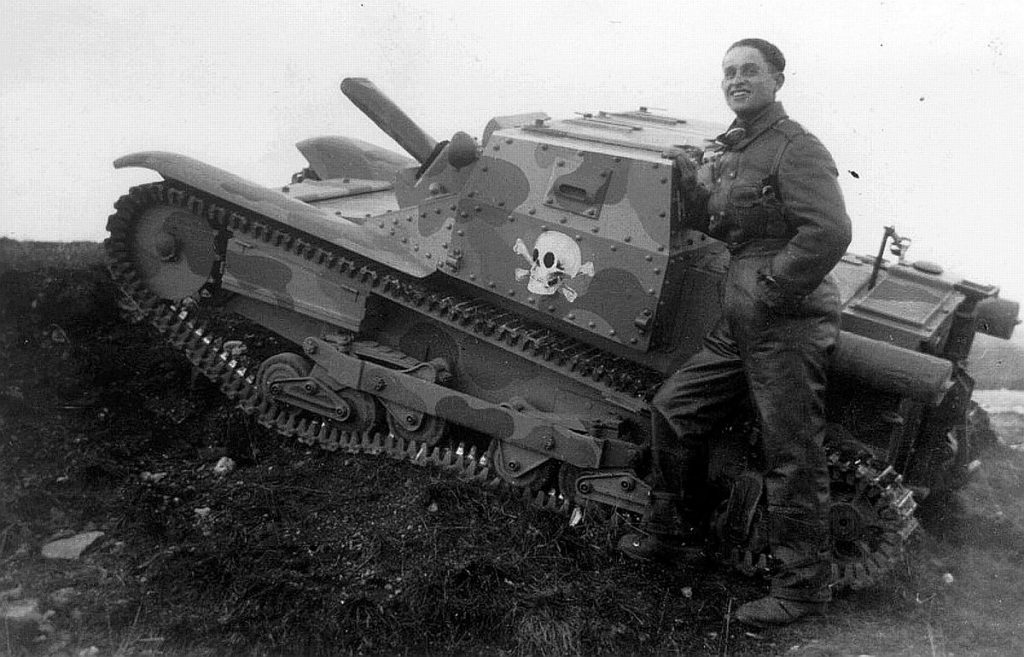 D. Doctrine – A 1938 circular signaled the adoption of this doctrine of high-speed mobile warfare as the official strategic and tactical concept of the Italian army. La Guerra di Rapido Corso (the war of rapid course) would be a war of maneuver, using what Liddell Hart had called the strategy of the indirect approach. The army would maneuver against the flank of the enemy. Mechanized and airborne weapons would be important aspects of war. Exploitation by motorized forces would follow the use of the maximum mass available to break the enemy line. Weaknesses in equipment and fuel would prevent this doctrine from being fully effective.

A primary element of the Italian doctrine was the combined employment of various arms, particularly infantry and artillery. Italian infantry was designed to be used in small, flexible, highly maneuverable units of great firepower. Each forward echelon, upon achieving a breakthrough was followed by reinforcements for purposes of exploitation. Mobility and maneuverability comprised the fundamental characteristics of Italian artillery. Closely allied to the artillery’s mission to support the infantry were the secondary missions of engaging in counter-battery firing and providing antitank protection. Cavalry maneuver was mounted, but combat could have been mounted or dismounted. 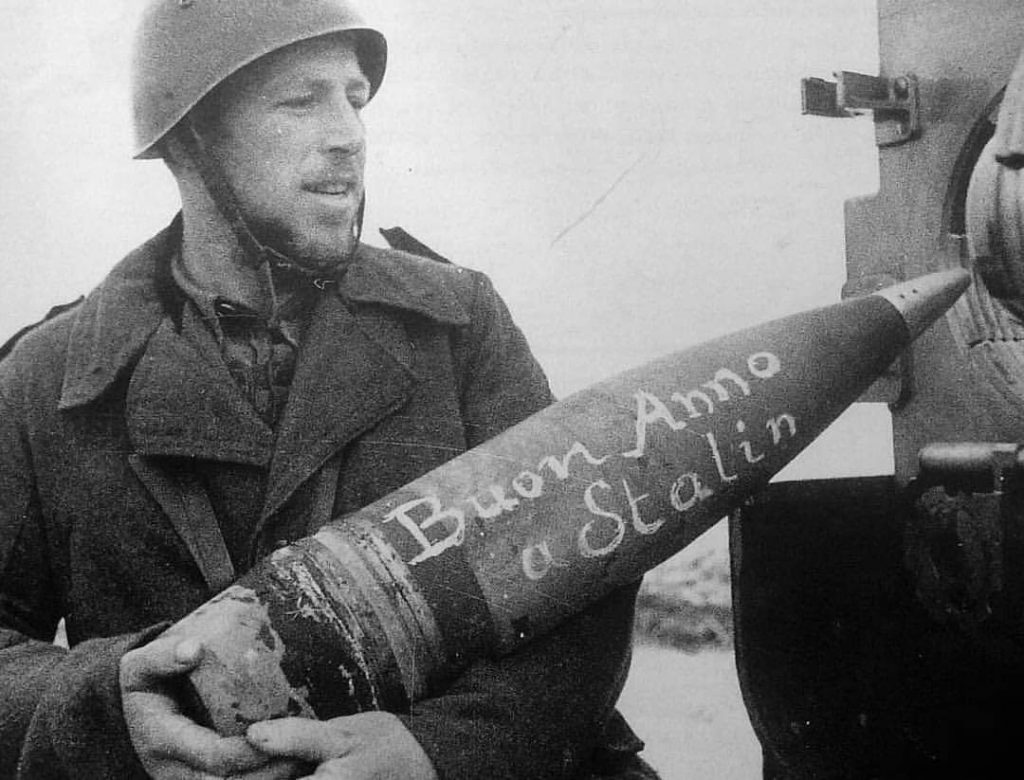 Mechanization of the cavalry resulted in increased mobility and firepower. This added, for the first time, the element of fire mass to the common cavalry missions of reconnaissance and exploitation. Italian engineers, although armed, were more concerned with normal engineer functions and less concerned with combat than in other modern armies.

Staff studies and war plans laid very little stress on the defensive, the assumption being that an offensive against its soldiers was a remote possibility. It was discovered that applying theories was somewhat more difficult than developing them. Organization was, however, based upon this Rapid Decision doctrine.

Intelligence was a relatively neglected aspect of operational planning, and commanders in the field tended to make insufficient use of intelligence resources. 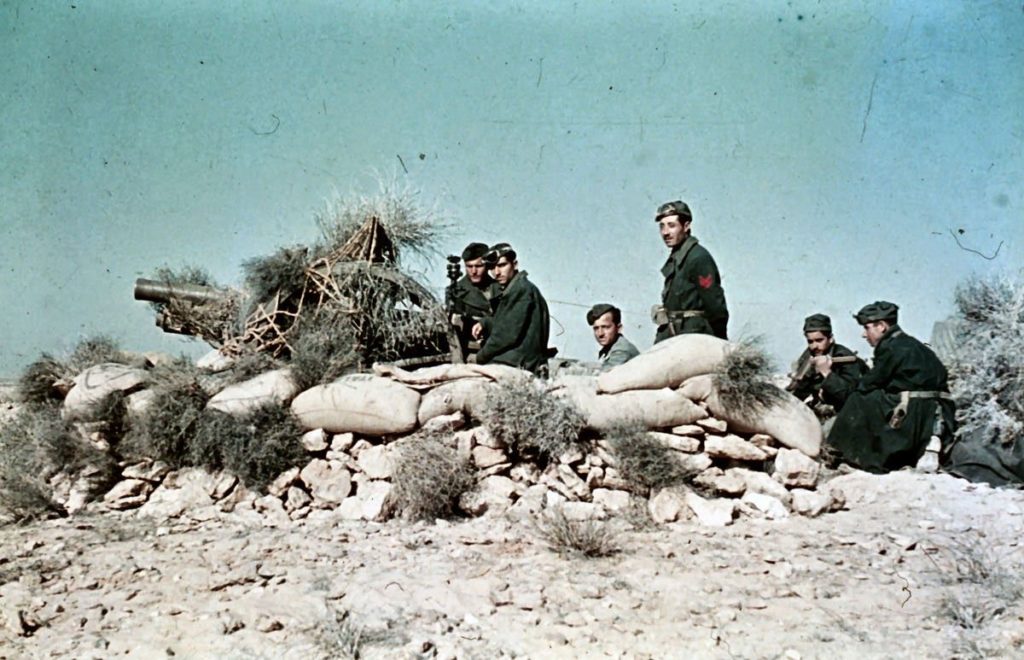 Until 1941, the army failed to recognize the need for specialized reconnaissance units to ensure surprise, to avoid it from the enemy, and to find opportunities to exploit. Italian units lacked armored cars with radios to keep commanders appraised on the locations and activities of enemy units. Air Force reconnaissance support was poorly coordinated.

The Italians aimed at security through offense and penetration. Intelligence, camouflage, and similar means of attaining security were regarded as preliminaries to offensive penetration. Security measures were not merely supposed to guard against surprise by the enemy but were also supposed to be so planned as to enable the Italian commander to inflict upon the enemy a surprise of his own.

Italian leaders were urged not to let security measures betray them into undue caution, which might slow up the forward drive of action.

On the contrary, daring was thought to be quite as important as security. Nevertheless, the Italians kept a somewhat greater distance between the advance guard and main body than the German did. 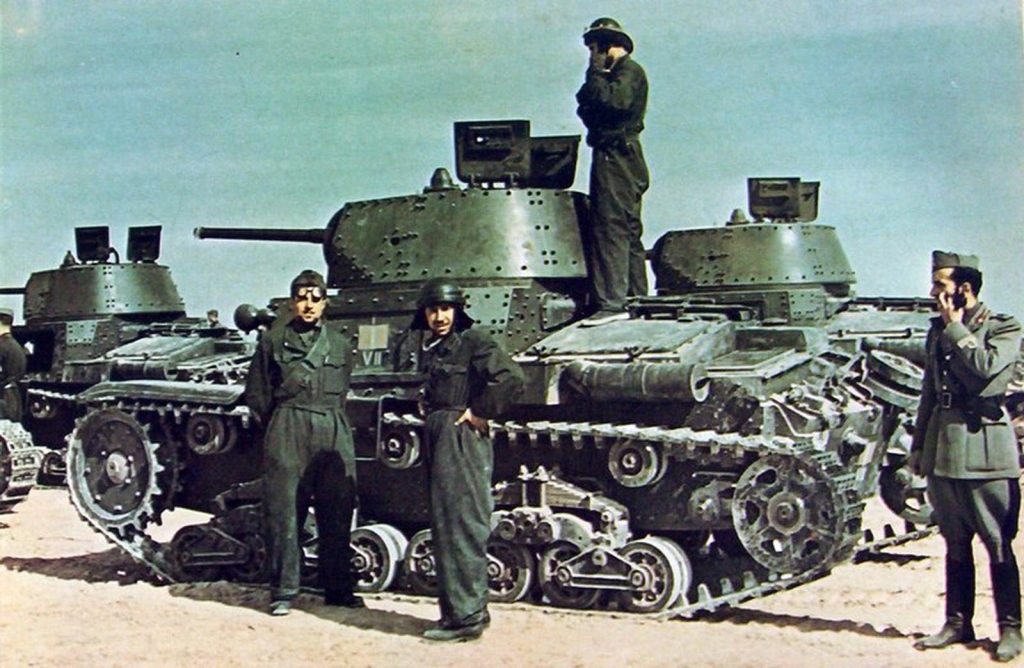 A. General — Meeting engagements, as distinct from mere preliminary engagements or patrol activities to test the enemy’s strength a and determine his weak points, were regarded by the Italians as a matter of rapid aggressive action.
It was believed such engagements would occur only in the case of relatively small forces, for Italian military theory denied the possibility of surprise in modern warfare, at least on any considerable scale. The Italians did not admit that a sudden and unplanned clash could occur between sizable forces. In other words, they expected proper reconnaissance to always reveal the presence of large enemy units.

B. Doctrine — The Italians believed that their system successfully combined the best features of both French and German tactics. It was supposed to provide for both conceptions—planned collision and swift and precise intervention with decidedly aggressive behavior.

The commander was urged to take the initiative in operations and attack with decision, seeking victory in the swiftness of movements in direction, in immediacy and power of impact. 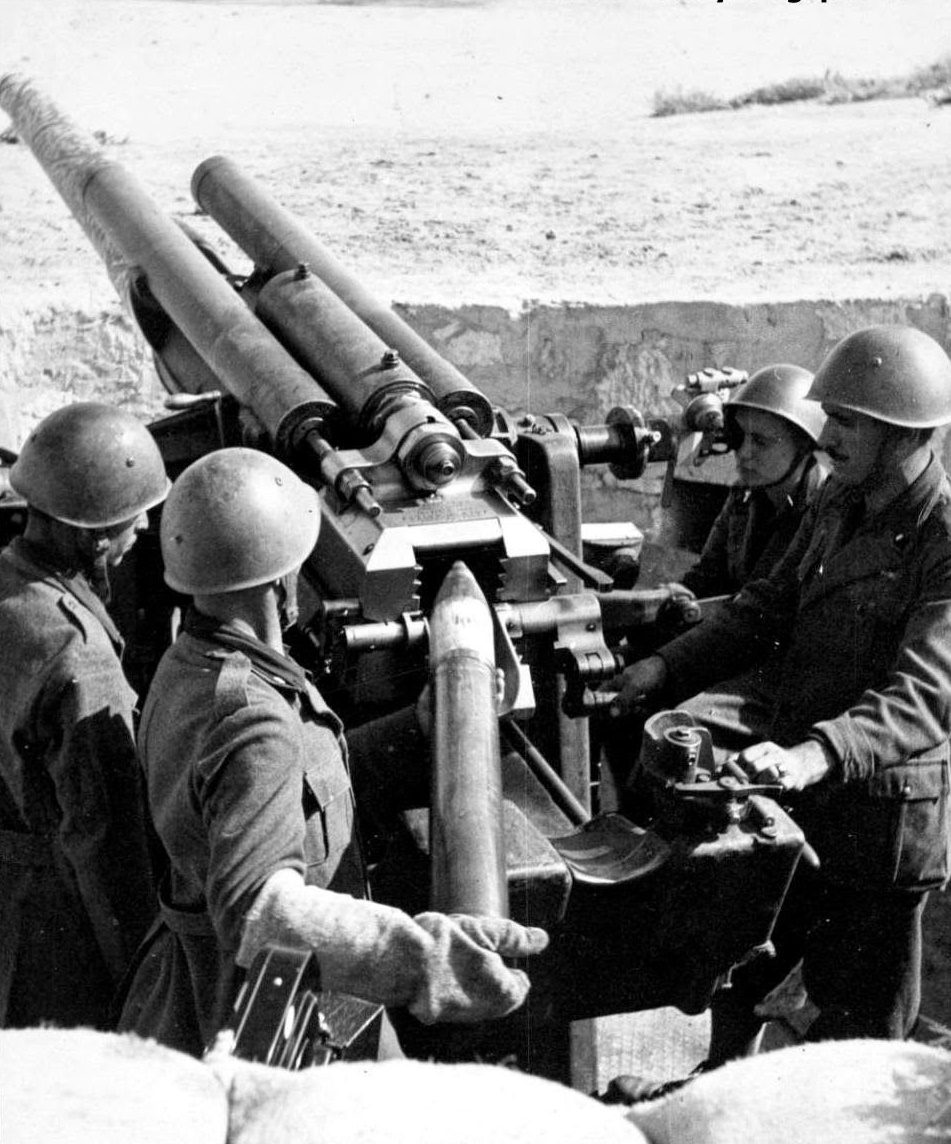 Italian ideas of attack and pursuit were much like those of any other modern army, though the emphasis placed on the offensive almost recalls the pre-1914 doctrines of the French Colonel de Grandmaison.

The 1940 Italian doctrine provided that the attack was to be recklessly pressed, was never to halt, and was to overcome the resistance with continuity of effort. Initiative, violence, and audacity were urged. As for the continuity of effort, one Greek tactical authority with much experience in the Albanian campaign against Italy declared that an obvious characteristic of all Italian attacks was their extreme brevity and the failure of officers rather than men to follow through.

It became almost a proverb in the Greek army that an Italian attack was certain to flag after the first 20 minutes. A Greek unit, which had successfully sustained an attack for that length of time usually, felt that it had for all practical purposes already won. This was not, of course, what the Italian tacticians had taught.

The Italian military doctrine of the present, wrote Maj Umberto Mescia in 1939, reaffirms the reasoning which was Caesar’s and Machiavelli’s; the offensive, because only the offensive can bring victory.

There is a return to the Roman concept, to the Latin and Italian spirit, because those qualities which bring success – a sense of responsibility and the willingness to meet danger – are particularly Italian, manly in courage and daring in spirit, ready to overcome difficulties.

To take the offensive means to attack, to go forward, to force one’s will on the enemy, and in this direction, the mental, moral, and material preparation of all is turned toward an ever greater formation of the offensive consciousness.

The actual performance of the Italian Army often fell somewhat short of this high standard. 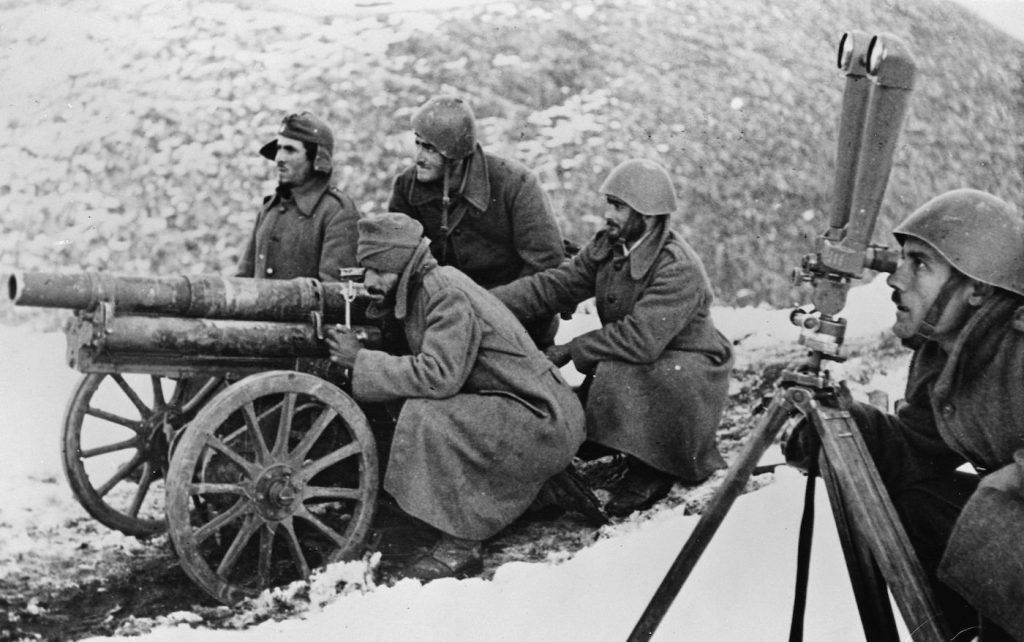 The Italian teaching was that a commander should concentrate his firepower on such a position whenever it is encountered. It was the Italian view that such action imposed on the commander merely a temporary pause in a position of arrest — a mere lull in his sustained offensive movement. Otherwise, Italian tactics discouraged any assumption of a static position.

When the Italians were compelled to assume the defensive in a position of resistance, they hoped to resume the offensive at the earliest possible moment — a doctrine common to most armies. Defense does not mean giving up the resumption of movement as soon as possible.

The main line of resistance was removed as far as possible from the enemy’s artillery fire, and the Italians endeavored to establish a zone of security with a depth ranging from 2000 to 3500 yards. In this area, utilizing all footholds that the terrain may offer, they organized holding positions.

These delivered long-range fire, especially along the easiest routes of penetration, to wear the enemy down before coming to grips with him.