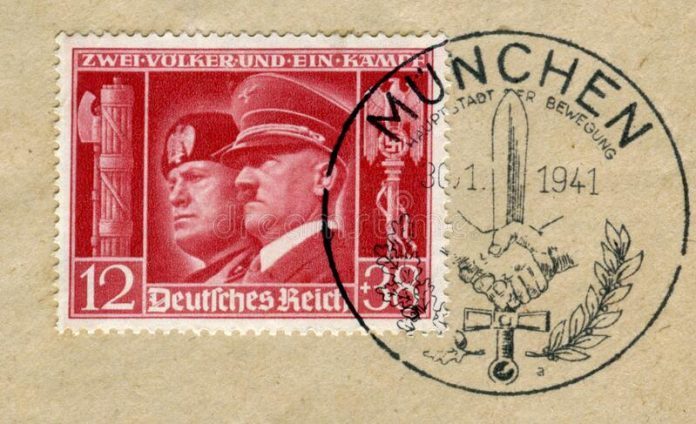 Forced Labor Worker to the US 26-ID (Boleslaw Piatkowski)(PL) 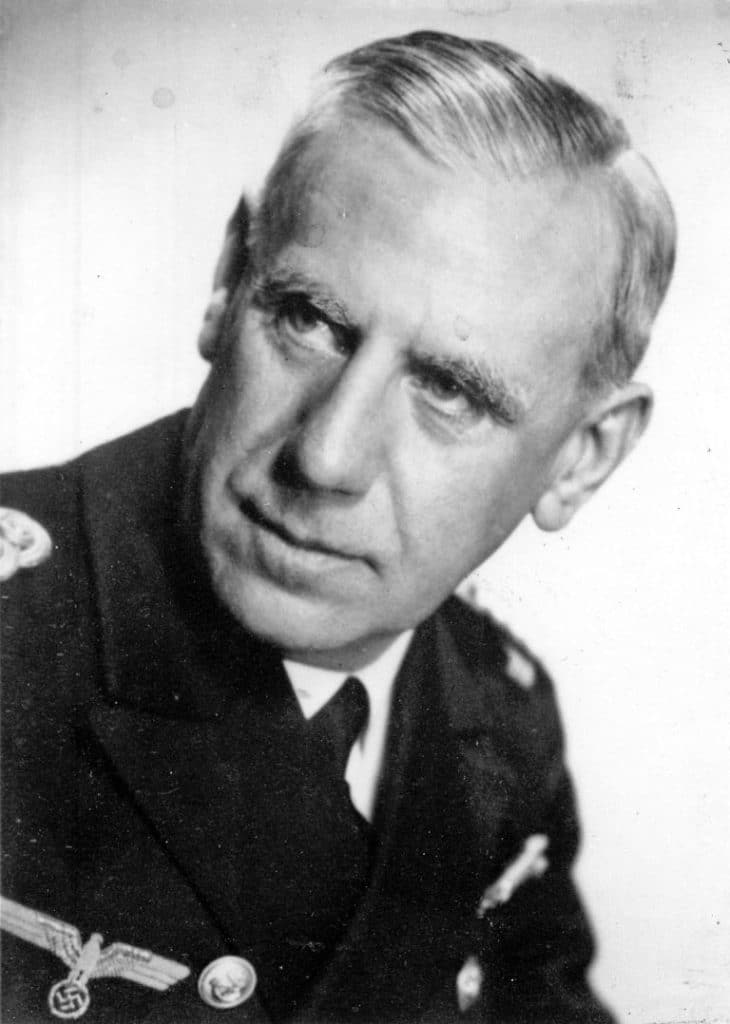 Admiral Wilhelm Franz Canaris (Jan 1, 1887 – Apr 9, 1945) was a German admiral and the chief of the Abwehr (the German military intelligence service) from 1935 to 1944. Canaris was initially a supporter of Adolf Hitler, and the Nazi regime. However, following the German invasion of Poland in 1939, Canaris turned against Hitler and committed acts of both passive and active resistance during the war. As the head of Nazi Germany’s military intelligence agency, he was in a key position to participate in Nazi resistance. As the war turned against Germany, Canaris and other military officers expanded their clandestine opposition to the leadership of Nazi Germany. By 1945 his acts of resistance and sabotage against the Nazi regime came to light and Canaris was hastily executed in Flossenbürg concentration camp for high treason as the Allied forces advanced through Southern Germany.

In WW2, the Germans created Abwehr Kommando units (AKs) to accompany the invading German armies and collect tactical and strategic intelligence in the form of documents, and material and captured enemy agents from occupied territories. AKs were used in Poland, Denmark, Yugoslavia, Greece, France, Holland, Belgium, Luxembourg, and the Soviet Union in order to complete special intelligence collection tasks performed alongside or even ahead of their front-line troops.

The first units were deployed in September-October 1939 in the Polish campaign. Abwher officer Paul Leverkuehn described in his book ‘German Military Intelligence’ how this occurred: ‘From the very start of the Polish campaign Abwehr Section III organized Abwehr Commandos and platoons, to advance together with the front-line units in order to protect German troops from the activities of the enemy Intelligence service, to be on the spot to acquire any material which might be of Intel­ligence value and to seek out and capture enemy agents’. Section III was the Counter-Intelligence and Security branch of the Abwehr. These ‘Abwehr-Truppen’ consisted of 12-15 men, under command of Section III officers. Their creation was the result of the experiences of Oberst Heinz Schmalschlaeger, an experienced Counter-Intelligence officer. He had participated in the occupation of Czechoslovakia in March 1939 and had failed to capture members of the Czech and British spy services working from Prague because the Germans had failed to capture the airport in time. (1)

Abwehr-Truppen under command of Hauptmann Ehrhardt Bulang managed to secure files from the Polish secret service, which proved useful in uncovering and arresting spies and traitors within the German establishment. Most of the Polish Intelligence (Section II of the General Staff) command managed to escape to Romania and then to Britain and France. When the Germans occupied the offices of the Polish Intelligence Service (Section II) in Pilsudskego Square on October 1, 1939, they found over a hundred locked safes – which all proved practically empty when opened. However, the Central Military Archive was located shortly afterward, by accident, in Fort Legionov: a German officer going one day for a stroll past one of the old forts, (Fort Legionov), a relic of the Czarist epoch, now devoid of any importance as a military installation, observed that the door was ajar and went in. He found himself in a species of a strong-room, filled with filing cabinets and a great number of bulky packages. On examina­tion they were found to contain not only the complete files of the reports from the Polish Military Attaches in Tokyo, Rome, and Paris but also a mass of incriminating and gravely compromising material. (2)

According to Abwehr Officer Oberstleutnant Oskar Reile, the officer concerned was none other than Hauptmann Bulang! The Germans required six trucks to remove the records, the examination of which resulted in the arrest of more than a hundred Polish agents. (3)

The Abwehr-Kommando (AK) units next operated during the occupation of Denmark. According to Leverkuehn, an IO of the Abwehr’s Hamburg station was ordered in February 1940 to prepare a precise military reconnaissance of Denmark for ‘Kommando zbV 31’. He did this by activating a number of sleeper agents in Denmark, as well as dispatching agents into Denmark to cover various military districts. Finally, during the month of April 1940, and the invasion of Denmark, he assigned IOs from the Hamburg station to assist this ‘Special Duty’ formation, which had troops with each of the two invading columns. This was therefore using Abwehr Section I (Intelligence) assets in the front line. The Abwehr officer in command reported: this was the first occasion on which a service of this nature was rendered by the Intelligence Service to the fighting forces. The formation, a little later on, of front-line Intelligence Commandos in all army groups is the best proof of the importance of the services rendered. (4)

The Abwehr III Kommandos from the Polish campaign were redeployed to form part of the invading force which entered Holland on May 10, operating with a Naval AK from Koln led by a Commander Kilwen. Their orders were to accompany the invasion units assigned to capture ports and coastal towns, and there to seize all intelligence material, examine it, sort it, and forward as quickly as possible any intelligence of immediate tactical value to the military HQ directing operations. The rest of the material was to be flown back to Abwehr HQ in Berlin. The AK was reinforced by a motorized platoon of GFP (Secret Field Police – security units equivalent to British Field Security Sections, or FSS) and a wireless operator equipped with an agent’s wireless set. During the advance, they received orders to set up in each important port a detachment to act as a Secret Intelligence Report group. The AK entered Rotterdam on May 13, where they captured examples of degaussing apparatus for neutralizing German magnetic mines. A set of construction plans was acquired as well as working examples. Abwehrtruppen were then sent to occupy Den Helder and Antwerp: In both these places, secret intelligence report groups were set up, as ordered. The Commando was then attached to the Fourth Army, to the headquarters of which it proceeded via Brussels and Maubeuge, whence it accompanied von Kleist’s army in its advance on the Channel ports. For some astonishing reason, the French defenders destroyed neither their archives nor even the various papers in the military vehicles stranded in the shallow water near the beaches, and in Boulogne and other ports a mass of most valuable material was captured. In a British RAF station the cipher in use between the British and French armies, complete with the key for May and June 1940, fell into German hands. The further advance led first to Calais and Dunkirk, then south-westwards to Le Tréport, Dieppe, St Valery, Le Havre and Rouen, and finally to Brest and as far south as Rochefort. In the meanwhile, the archives of the French Ministry of Marine in Paris had fallen into German hands. (5)

Adm Canaris decided to increase the number of such Kommandos for the French campaign, to operate immediately behind the front line. These were organized by Abwehr Section I, Intelligence, and Abwehr III F, Counter-Espionage. They were given several tasks to prevent espionage and sabotage and protect rail links and equipment (first priority); obtain from occupied territory information on enemy forces, especially those opposing the German armies; and gain information on hostile intelligence services. This last was to be done initially through the capture and analysis of secret material. (6) According to Oskar Reile, an Abwehr I officer involved in the Abwehr’s French campaign, the Abwehr units were controlled through the Oberkommando der Wehrmacht (OKW) (the German Military High Command), so they were designated as Abwehrkommando OKW I, II, etc. The largest of these AKs was OKW IV, with a staff of 33 including interpreters, Abwehr specialists, and GFP officials. With other troops, the AK totaled 165 officers and men. There were only 3 professional Abwehr officers in the unit. Oskar Reile, commander of this AK, prepared an ‘operations manual’ for the unit, detailing known and suspected representatives and agents of the western intelligence services in Luxembourg and France; locations of buildings known or suspected to hold classified information; and names and personal details of Abwehr agents held by the French and Luxembourg authorities. Reile was able to provide some basic training to the personnel and brief the officers and GFP personnel on their specific tasks ahead of actual operations.

The Duchy of Luxembourg was occupied on May 10, 1940. The most valuable information collected by the unit was found by an Abwehrtrupp commanded by a Hauptmann Hermann Brunner on the 10 or the 11 May. The documents recovered proved the cooperation between the French and Luxembourg authorities and detailed their plans for the destruction of the Luxembourg-Trier rail link in numerous locations. Brunner even obtained the key to access the bunkers containing the explosives which were built under the railway. The German 16th Army was, therefore able to neutralize this potential sabotage. The French Service Spéciaux (Special Services) (under Col Louis Rivet) had worked with the Luxembourg authorities to infiltrate agents into Germany, and returning agents were debriefed in Luxembourg. Reile found that the French intelligence service officers based in Luxembourg had fled before the German arrival but his unit located seven Abwehr agents captured in Luxembourg in September 1938. Two of them had been controlled directly by Reile in Trier.

Leaving behind part of the unit to form a Captured Material Section to pass back important documents to the Abwehr in Wiesbaden, OKW IV advanced to Sedan. They were able to determine from studying uniforms and questioning POWs the units opposing the advancing German forces, and that these corresponded with the information gathered by Abwehr I (Intelligence) agents prior to the campaign, useful tactical information for the advancing German army.

On May 20, Oberst Rohleder, head of counter-espionage (CE) in Abwehr III, ordered Reile’s unit to recover by any means a number of German agents who had been moved by the Belgians from Brussels to Abbeville. Arriving on May 21, Reile found no sign of the agents but did locate cabinets so full of documents his unit was compelled to select only the most important documents to take back to the unit’s base at Hirson. Information of importance for the 16.Army was issued immediately in reports, the rest was sent back to Luxembourg for dispatch to Wiesbaden. Meanwhile, the unit was busy locating much classified French information from the occupied area.

After a short rest, the unit was reassembled and re-tasked on June 4, 1940, to move towards Dunkirk, Calais, Boulogne, and Lille and collect abandoned British documents. They found so much information, relating to military, secret service, and political matters, that they were unable to transport it back until they received additional help from Germany.

After the occupation of Paris, Reile’s first job was to collect and study all captured documents in Paris. He was given the help of several AKs for this operation, and a staff of 20 officers, 12 female clerks, and 25-30 soldiers. The study of the material was assisted by the dispatch from Berlin of several teams. Captured material included the files of the French GHQ, those of the Deuxième Bureau, and the complete files of the Sureté Nationale. (7) This material was later captured in Germany by the invading Soviet forces and was not returned to the French until a few years ago. 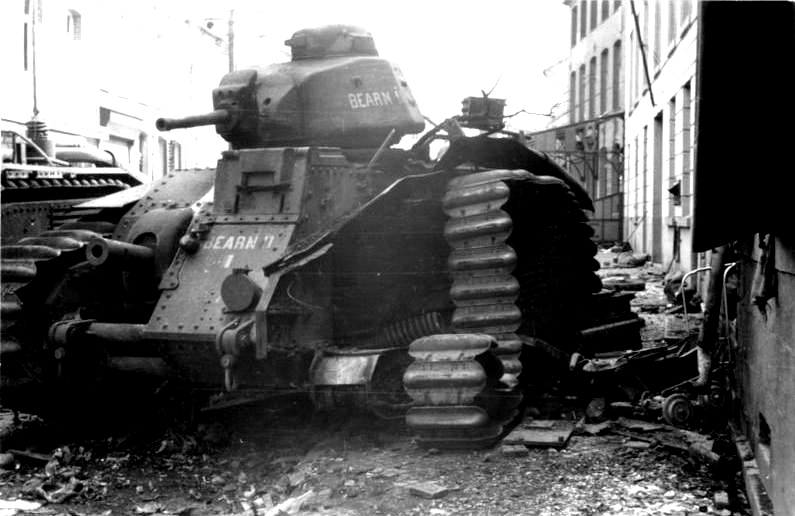 B.B. King & The Crusaders - Royal Jam - Better Not Look Down

Joe Biden's fiercely proud that 'no one's ever done as much as president as this administration is doing' https://twitchy.com/sarahd-313035/2022/11/30/joe-bidens-fiercely-proud-that-no-ones-ever-done-as-much-as-president-as-this-administration-is-doing/

It's ALL a PsyOp. This is about normalizing the lie that "vaccines" are something you shoot-up with every few months, then weeks. Why else would Slick Willy tell everyone he has a flu?

They count milking dumb cattle forever in exchange for nothing but SLOP!

The professors need to do to the universities what @elonmusk just did to Twitter.