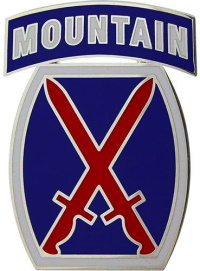 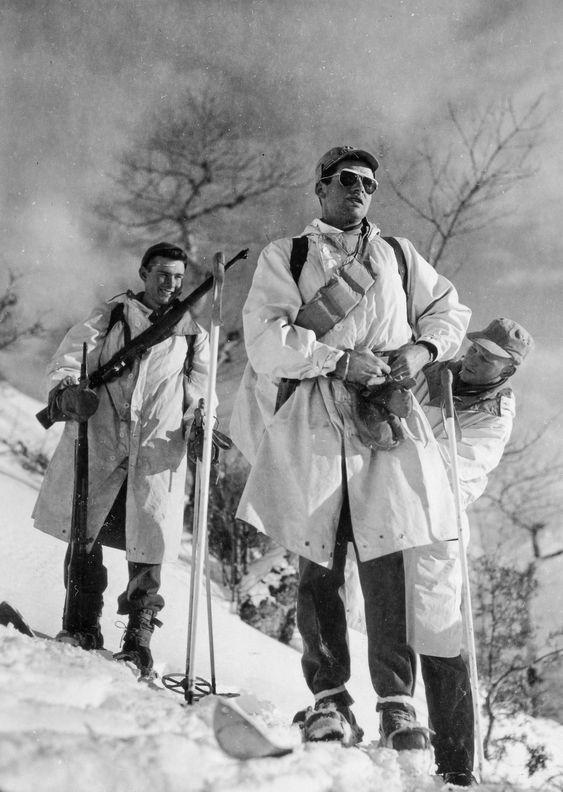 The 10th Light Division (Pack Alpine) was constituted on Jul 10, 1943, and activated five days later at Camp Hale, Colorado, under the command of Brig Gen Lloyd E. Jones. At the time, the division had a strength of 8.500 men out of the 16.000 planned, so the military transferred troops from the 30-ID, 31-ID, and 33-ID along with volunteers from the National Guards of the Maine, New Hampshire, Vermont, New York, Michigan, Wisconsin, Minnesota, Iowa, North and South Dakota, Colorado, Wyoming, Montana, Idaho, Utah and Washington State (Specifically men who are from the Rocky Mountains region and those who are from the Northern States close to the 49th Parallel of the US-Canadian Border), to fill out the remainder of the division.

This lowered morale and the division faced many difficulties in the new training, which had no established army doctrine. The 10th Light Division had centered on regimental commands; the 85th Infantry Regiment, 86th Infantry Regiment, and 87th Infantry Regiment. Also assigned to the division were the 604th, 605th, and 616th Field Artillery Battalion, the 110th Signal Company, the 710th Ordnance Company, the 10th Quartermaster Company, the 10th Recon Troop, the 126th Engineer Battalion, the 10th Medical Battalion, and the 10th Counter-Intelligence Detachment. It was equipped with vehicles specialized in snow and mountainous operation, M-29 Weasel, as well as winter weather gear like white camouflage suit, skis specifically designed, and climbing equipment. Preparing for the invasion of the mountainous areas in Italy, the men were sent to the Seneca Rocks in West Virginia for the climbing part of their training.

On Jun 22, 1944, the division was shipped to Camp Swift, Texas to prepare for maneuvers in Louisiana, which were later canceled. A period of acclimation to a low altitude and hot climate was thought necessary to prepare for this training. On Nov 6, 1944, the 10th Light Division was renamed 10th Mountain Division and one blue/white ‘Mountain’ tab was authorized for the division’s new shoulder sleeve insignia. The 10-MD staged then at Camp Patrick Henry, Virginia, on Dec 27, until departed Hampton Roads POE on Jan 6, 1945, and completely arrived in Italy on Jan 18. When hostilities ceased, the 10th Mountain Division was sent back to the USA on Aug 11, moved to Camp Carson, Colorado, on Aug 16, and was inactivated there on Nov 30, 1945. 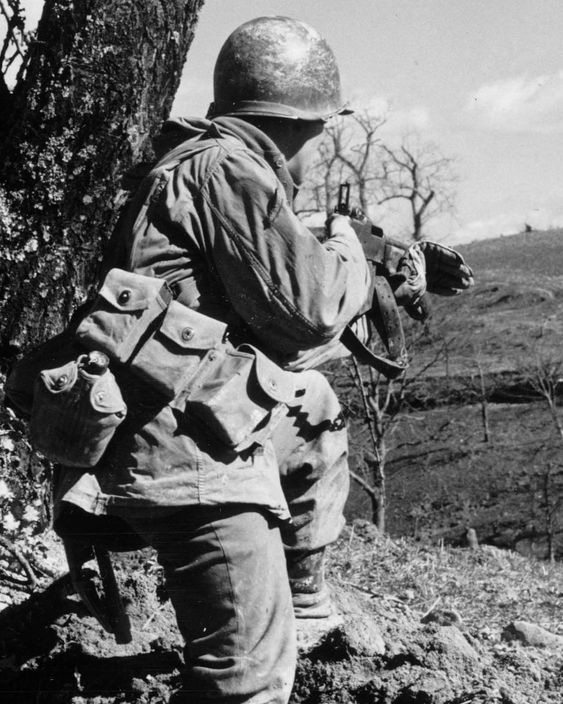 The 10th Mountain Division had been activated as the 10th Light Division (Pack, Alpine) at Camp Hale, Colorado, on Jul 15, 1943, using several specially designated mountain units assembled at the Mountain Training Center which had trained at Lake Placid, Old Forge, and Mount Rainier. It had received intensive training in fighting across snow and mountainous terrain, and its mountaineer and ski personnel represented elite resources which led to the division being re-designated the 10th Mountain Division on Nov 6, 1944. The division was now ready to enter the war in Italy. 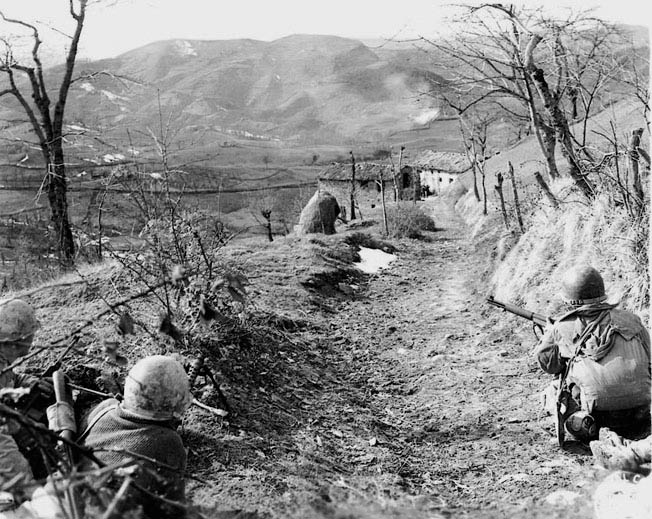 After a brief training period, the division entered combat on Jan 8, 1945, near Cutigliano and Orsigna. After preliminary defensive actions, the division scaled the steep Sarasiccia – Campania cliff and took the German defenders by surprise during the night of Feb 18/19 1945. It made its main effort on the Belvedere – Gorgolesco Hillmass with the 85th and 87th Mountain Regiments, omitting artillery preparation to gain surprise. Counter-attacks against the Sarasiccia-Campania Ridge were defeated and the division gained the crests of both Mount Belvedere and Mount Gorgolesco on Feb 20. It advanced against the crest of Mount Torraccia in the face of strong German opposition and reached its summit after heavy fighting on Feb 24.

Next, the division made a limited offensive to secure the heights west of Highway 64, which was opened by the 86th and 87th Mountain Regiments on Mar 3. The 87th seized Mount Terminale and Mount Della Vedetta and blocked the Pietra Colora Road, and then advanced and took Mount Acidola and adjacent mountaintops. 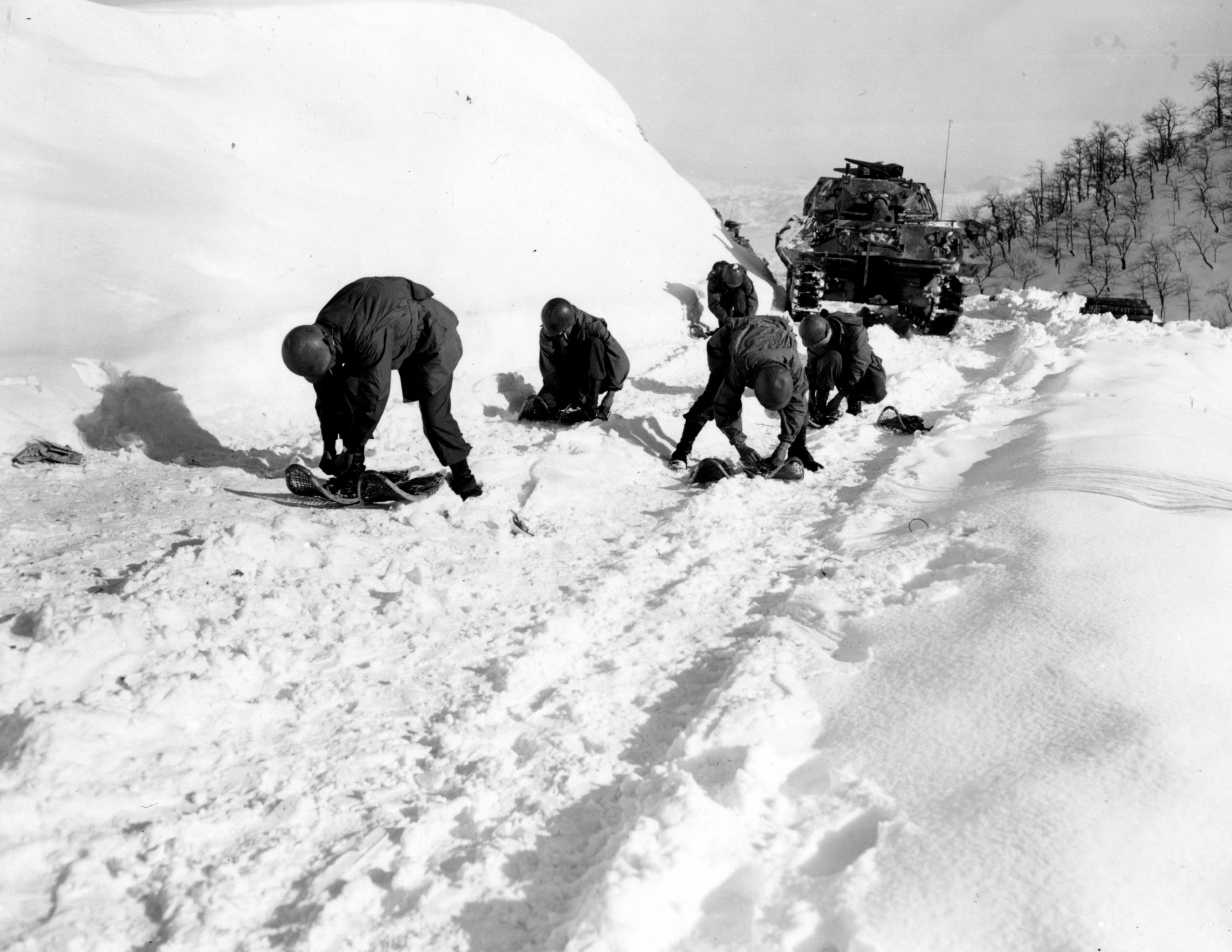 The 86th meanwhile cleared Mount Grande d’Aiano. The 85th was committed to the attack on Mar 5 and pushed forward to Mount Della Spe where it repulsed several German counter-attacks. On Mar 9, the division was able to improve its positions north of Castelnuovo with the unopposed seizures of both Mount Valbura and Mount Belvedere. The final offensive was initiated on Apr 14 as the division cleared the Pra del Bianco basin, securing Torre Iussi and Rocca di Roffeno. As the division spearheaded the drive, it took Mount Pigna and Mount Mantino on Apr 15 and went on to capture Mount Ferra, San Prospero, and Mount Moscoso on Apr 17.

Emerging from the Apennines into the Po Valley, the division crossed Route 9 in the vicinity of Ponte Samoggia on Apr 20. The Panaro River bridge at Bomporto was taken intact on Apr 21 and the division crossed the Po River in assault boats on Apr 23, striking north toward the Villafranca Airport, southwest of Verona. After the 85th made an amphibious crossing of Lake Garda which took Gargnano, the division secured Portio di Tremosine on Apr 30. German resistance in Italy formally ended on May 2, 1945.