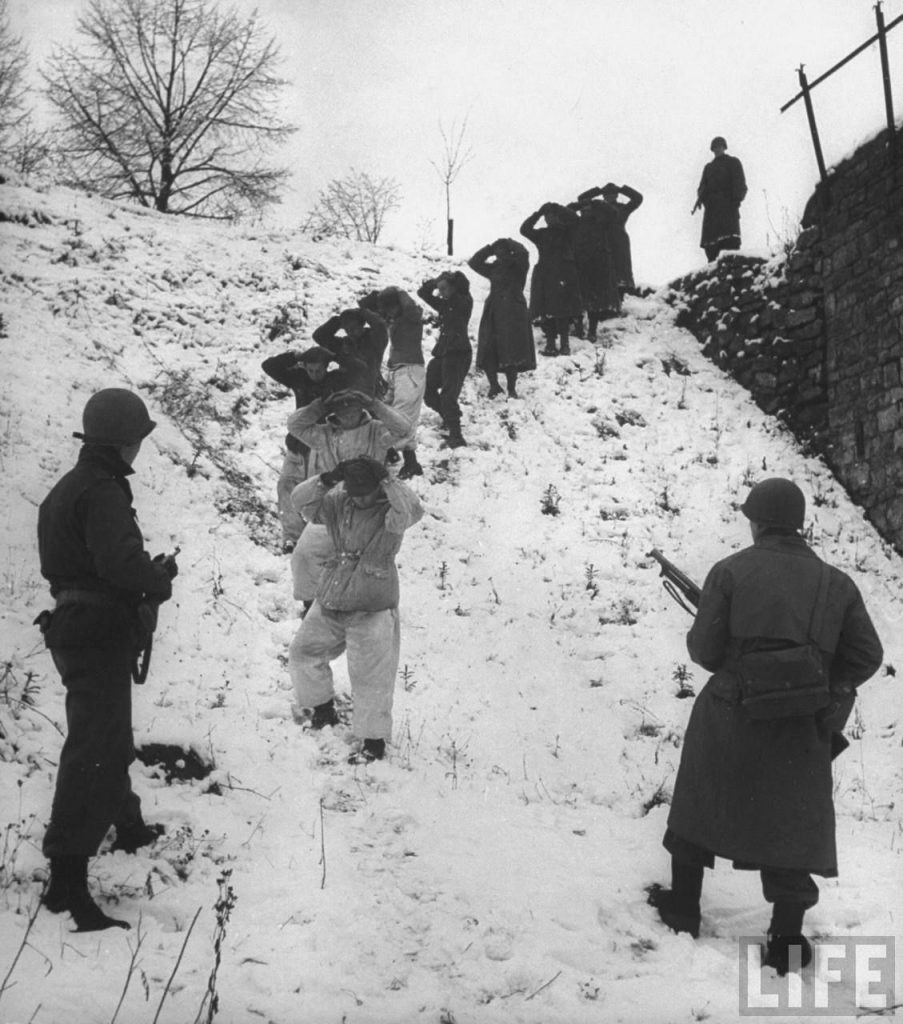 This archive covers the operation of the 3/291-IR (US 75-ID), in the combat approach to Aldringen, Belgium, on January 22, 1945, during the Ardennes-Alsace Campaign. In order for the reader to have a better understanding of this operation, let us view some of the dominating events directly preceding this campaign. Since Jun 6, 1944, when the Allies invaded the Normandy Beaches of France, they had been able to push steadily forward, and in the space of approximately six months, stood poised on the western frontier of Germany. Morale was high, fighting reduced, supply lines long, weather severe, and that particular phase of the war known as the Ardennes-Alsace Campaign began.

On the morning of Jan 3, 1945, we find the allied air forces pounding the German lines of communication, troops, and supply concentrations. At the same time, the US 3-A continued its fighting around Bastogne, Belgium, and the US 1-A began its offensive from the north, the US VII Corps leading the attack, the US XVIII Corps (Airborne) on the east and the UK XXX Corps on the west. For the next eleven days, Gen Hodges’ US 1-A attacking from the north and Gen Patton’s US 3-A attacking from the south ground their way steadily forward against a still unbeaten enemy and weather conditions at least as formidable as the enemy. The snow in many cases was two feet deep and practically every move was accompanied by the loss of troops because of frozen hands, feet, or faces. The weather conditions of the 1944-1945 winter in the Belgian Ardennes Forest were the most severe in over sixty years. On Jan 16, the US 1-A and the US 3-A joined at Houffalize, Belgium, and then executed turns to the left and right respectively and attacked due east. From this time forward in the campaign, most units were confronted with the task of fighting a retreating enemy from one roadblock or ambush to another.

Before Jan 15, the US 75-ID had never fought as an entire division. Now, with all its organic units together for the first time, under the US XVII Airborne Corps, the division was ready for offensive operations, and during the next seven days, it received its baptism of fire as a division. On Jan 22, the US 75-ID headquarters was located in Vielsalm, Belgium, and the division was about to start a new operation. The enemy had hastily but skillfully organized defenses along the line, Rogery, Commanster, Hinderhausen, and the division was given the mission of taking the towns of Braunlauf, Maldingen, and Aldringen.

The 291-IR occupied a position about 1.5 miles south of Bèche, Belgium, and faced generally southeast. The 1/291, with 1 platoon of tanks from Charlie Co 750-TB attached, was in line siding with the 3/291 with an equal platoon of tanks attached. The regiment planned to move out (when directed) with these 2 battalions on line and the 2/291 in reserve. The regimental mission was to secure the ground this side of Aldringen and Maldingen and ultimately capture the towns. The 1/291 was to move out at 0200 on Jan 22 and seize the small town of Commanster and the high ground to the east, then on to the dominating terrain north of Maldingen. The 3/291 was to leave its initial position at 0800 and move southeast to secure the railroad in the vicinity of Aldringen in preparation for attacking the town. BATTALION SITUATION

The 3/291 after having fought in this area for almost a month had lost heavily in personnel. Most of the evacuations of troops resulted from parts of the body being frozen, trench foot, or dysentery. A relatively small percentage was due to actual gun-inflicted wounds, although fighting had been continuous. It was impossible to secure replacements and the men were extremely tired physically. The battalion was relieved from Petit-Thier on Jan 21 and moved to the rear through Vielsalm and on to the area, 1.5 miles southeast of Bèche to relieve elements of the 289-IR. It left Love Co in Blanche-Fontaine as a holding force as the 1/291 reorganized.

When the 3/291 was 1 company short, the 2/291 furnished Fox Co to take its place. Love Co saw no action with the battalion during the period covered by this archive. The battalion closed in the area by 1300, the afternoon of Jan 21, and the battalion command post was set up in a large farmhouse which was the only shelter in the battalion front line area. Fox Co was on the left and King Co on the right with Item in reserve. The two front-line companies occupied the military crests of their respective positions. The battalion aid station, the ammunition, and the pioneer platoon were located in the woods about 1200 yards northwest of the battalion CP. The battalion kitchens were with the regimental train. It was planned to feed a hot meal the evening of the 21 just prior to darkness and a hot breakfast the next morning.

The area to the battalion front was thickly wooded with scattered fire breaks which seemed to run, in most cases, parallel to the front. Except when looking down a fire break, the visibility in the timber was limited to approximately 30 yards. There were a few small clearings throughout the area where timber had been cut, and in these areas, the snow was over 2 feet deep. The snow in the densely timbered areas was only a little over a foot deep as much of the snow was held on the branches of the heavy pine timber. No dominating road of any kind existed in the battalion area of advance, and the fire break trails with snow over 2 feet deep were impassable to the vehicles of the battalion.

From the battalion position, neither side could observe the other to any great advantage. The weather had taken a turn for the worse and the temperature had dropped to a few degrees above zero. Everything was frozen solid and the snow which seemed to blanket the entire world made any movement by vehicle or troops very difficult. During the afternoon, recon patrols were sent out from both Fox and King Cos. All patrols returned with negative reports except that King Co’s patrol reported tank movement further south in the direction they thought to be the town of Beho, Belgium. Any previous tracks of German vehicles or troops had been obliterated by the heavy snow. No additional patrols were sent out before the battalion moved out.

Telephone contact with the Regimental S-2 and personal contact with officers of the 289-IR gave very little new information regarding the enemy. The Germans were withdrawing from the area with all possible haste using delaying rear guard action, and their morale was reported as extremely low. Their poorest troops were being used to delay the Americans and the only reason they manned their weapons at all was because of the 1 or 2 SS troopers left behind with each detachment to enforce resistance. The Regimental S-2 did state that Intelligence Agents had reported from Corps that all Germans had withdrawn to the area of St Vith. At approximately 2100, on the evening of Jan 21, Maj Bruce B. Bissell, the battalion CO, received orders to report to the regiment for the battalion order. Maj Bissell took Capt Commador Fergeson (S3) and left for the regiment immediately. Maj Bernard S. Handy, the Executive Officer, was instructed to notify all company commanders to stand by. At about 2300, the battalion order was issued – March Objective.

Item Co was to follow to the left rear of King Co at about 150 yards and maintain contact with the US 84-ID on the battalion’s right. Lt James Caskey with his platoon was to keep this contact. Item Co was also to be prepared to relieve or pass through Fox or King Co should a situation so dictate. Contact on the left with the 1/291 was to be maintained by Fox Co. Dog Co was to furnish regular forward mortar observers for the rifle companies and be prepared to fire on call. No preparatory fires were planned or fired. One platoon of machine guns was attached to each of the 2 forward companies.

The battalion command group was to follow the right half of Fox Co and the battalion rear command post was to be maintained in the farmhouse until it could be displaced forward to the area of Beho. Artillery and mortar concentrations were plotted over the entire area to the front, All prominent features were plotted and given a numbered concentration; however, none of the numbered concentrations were registered prior because of lack of observation. No artillery planes were up because of the bad weather and the absence of landing fields. One platoon of tanks was to arrive on the morning of Jan 22 and proceed with the battalion as soon as a route could be determined. The battalion command group was to lay wire as they moved forward, giving the forward battalion communication with the battalion rear and the regiment. SCR 300 radios were to remain open and this was practically the only means of communication for the companies with battalion.

Messengers could be used but since the terrain was rough and the snow deep, the movement would be very slow, The Artillery Liaison Officer’s radio offered the battalion an alternate contact with the regiment. The battalion ammunition point and aid station were to move forward to the vicinity of the farmhouse just as soon as the battalion moved out. The ammunition supply was to follow behind Fox Co using fire breaks and trails as they were cleared. All individual equipment not needed was to be left behind and brought up on vehicles in the afternoon (bedrolls, etc. ). A small amount of extra ammunition and K rations were issued the evening of Jan 21. 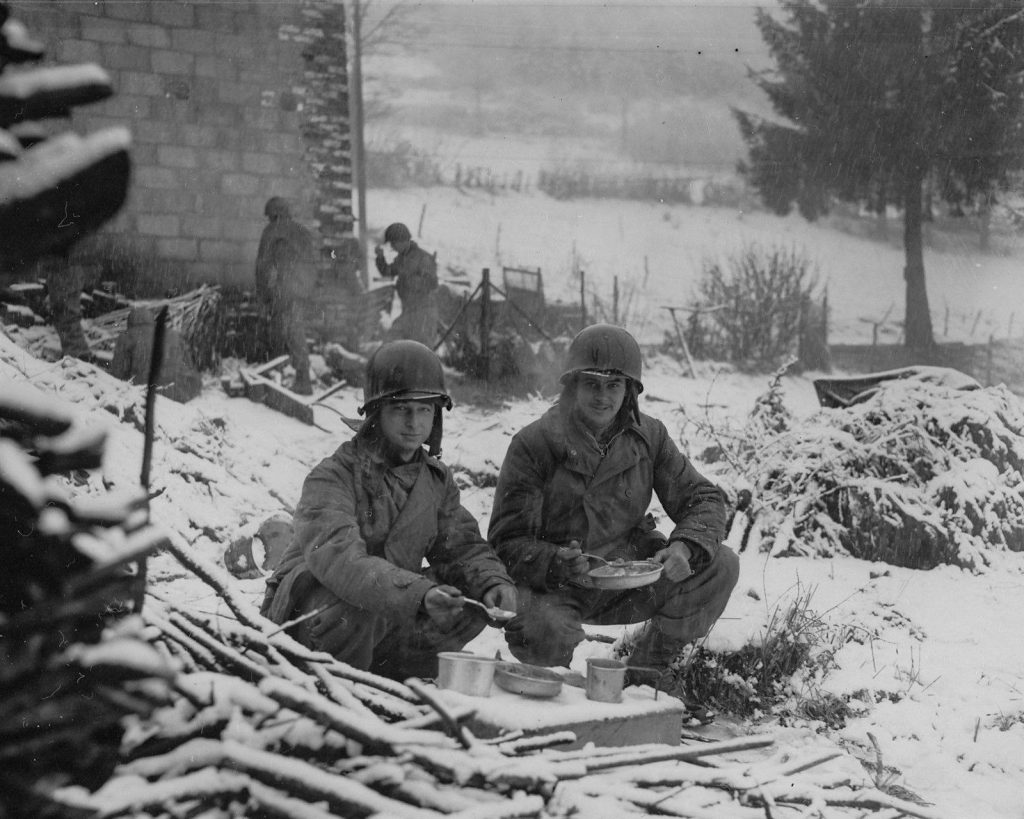