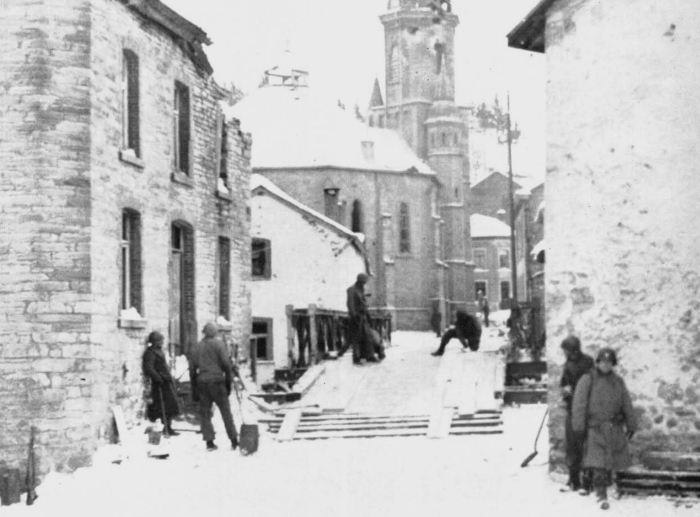 This archive covers the operations of Charlie Company, 291st Infantry Regiment, 75th Infantry Division in the Ardennes Campaign near Grand Halleux, Belgium. The action to be discussed in detail is that of Charlie Co in the attack and subsequent holding of a high key terrain feature on Jan 15 and 16, 1945. In order that the reader may be more fully informed on the US 75-ID, and the major events leading to that situation, it will be necessary to flashback to the month of June 1944.

The US 75-ID was rapidly training filler replacements at Camp Breckinridge (Kentucky) – 3500 men from (ASTP) Army Specialized Training Program and (USAAF) US Army Air Force replaced a duplicate number of reinforcements who went overseas immediately after maneuvers. On Jun 6, 1944, the invasion of France was launched by Allied Armies. Members of the US 75-ID now realized that soon they too would be moving to the combat zone. On Oct 22, 1944, elements of the US 75-ID embarked for the (ETO) European Theater of Operations. On Nov 2, 1944, the 291-IR docked at Swansea, Wales, and departed immediately for camps in Pembrokeshire, Wales. On Dec 9, Orders were received assigning the US 75-ID to the US XVI Corps, US 9-A. On Dec 13, most of the troops of the 291-IR bivouacked at Saint-Paer, France. On Dec 19, orders were received by the US 75-ID, releasing the division from US XVI Corps (9-A) and assigning it to the US VII Corps, US 1-A. By 2400, Dec 22, the division command post had opened at Ocquire, Belgium, and all elements had closed into nearby areas. Now, the US 75-ID prepared took its place in the front line to stay the German Winter Offensive.

On Dec 16, the German launched their offensive into the Ardennes with the 5.Panzer-Army, the 6.Panzer-Army and the 7.Army. The Ardennes, a mountainous, broken terrain, steep hills, deep and narrow valleys with a great number of small streams and cross compartments, was thickly covered by fir trees as only man can plant them. Into this terrain, covered by snow, shrouded in fog and mist, the German Armies rolled deep into Belgium. American units in the path of the offensive fought valiantly to halt the tide, but fog, snow, and the terrain were as much a foe as the Germans. Since time prohibited coordinated defenses, the US 75-ID was committed piecemeal.

On Dec 23, Gen Joseph ‘Lightning Joe’ Lawton Collins, Commanding General of the US VII Corps, issued orders attaching the 289-IR and the 290-IR to the US 3-AD while the 291-IR was ordered to outpost the Ourthe River between Bomal and Grandmenil, Belgium. On Dec 24, the 2-291-IR was attached to the US 2-AD while the remainder of the 291-IR was assembled in the vicinity of Sommeleuze, Belgium, as US VII Corps Reserve. During Dec 23 and 24, Charlie-291 was working with elements of the 2-AD and it was not until the late afternoon of Dec 24, that word was received that Charlie-291 was to join the 291-IR at Sommeleuze.

The period of Dec 24-26, saw the height of penetration by the German offensive, the lifting of the fog permitted the Allies to launch one of their greatest air offensive against a single target, the German columns on Dec 24. The seemingly haphazard employment of units piecemeal into the stemming of the onslaught had blunted and at least stopped the Germans. The stubborn resistance at Bastogne, the US 3-A counter-offensive launched on Dec 22, together with the ever stiffening of the forces along the northern flank of the salient had burned the tide.

The US 1-A intelligence believed that an immediate offensive by elements of the 6.Panzer-Army against the west flank of the salient had been shelved until the thorn of the American US 3-A and Bastogne could be removed. The US VII Corps plan of attack was to launch its offensive at 0830, Jan 3, seize Houffalize and its vicinity and at the same time, cut the Highway Houffalize–St Vith to prevent the withdrawal of the German troops. The US 2-AD and the US 3-AD supported by the US 83-ID and the 84-ID were to spearhead the attack. The planned VII Corps offensive launched as scheduled on Jan 8, 1030, and the US 75-ID was assigned to the US XVIII Corps (A/B). The division (less the 290-IR) was then ordered to relieve the US 82-A/B in the western sector of the US XVIII Corps (A/B) along the

On Jan 6, the 1/291-IR was located outside the city of Spa, in Creppe. On Jan 8, the battalion received orders to move to Basse Bodeux, on one of the toughest forced marches they were ever to encounter. The march was over unused roads, at times knee-deep in snow, covered by ice, in freezing weather. It was a tired battalion that closed into Basse Bodeux at 0330, on Jan 10. By 1700, plans and recon had been completed and the 1/291 was once more on the move, this time to relive elements of the US 82-A/B near Farnières.

While the move to the position was only about 5 miles, the route was through the woods, over fire-breaks that were deep with snow and blocked by discarded German equipment. By 2300, Jan 10, the battalion had completed the relief and had patrols operating to the front. As the dawned bright and clear, on Jan 11, the Battalion and Company Commanders of 1/291 could see their position clearly for the first time, all three companies were on line covering a front of 4000 meters of broken wooded terrain. Reorganization of positions had to be accomplished over the entire sector. The Battalion’s CP was established at Farnières, Baker on the right, Charlie in the center, and Able on the left flank of the battalion. A series of strong points were established in each company’s sector and were connected by patrols. Contact was established by patrols with the 289-IR on the right and the 3/290 on the left. Continuous day and night patrols were the standing orders. The Germans had established a stronger counter-patrol screen across the front and on the Salm River, this was very effective in countering patrol efforts.

Contemplating an attack order, the Regimental CO, Col Harry S. Robertson, had ordered the 3/291 to increase the bridgehead over the Salm River at Grand Halleux. At 1300, Jan 12, Love Co launched an attack and captured its objective, the high ground east of Ennal, but received à counter-attack at 1700 and lost the position. Love Co retook the position and held it on Jan 13. The men (95% of the T/O strength) of the 1/291 spent most of their time, while not on patrol, repairing and cleaning equipment, drying clothing, and keeping the war in the best way that could be found during the period Jan 11-14, inclusive. On the afternoon of Jan 14, orders were received for all company Commanders to be at Battalion at 1915, that evening.

The 291-IR will attack at 0730, Jan 15, through the positions held by the 3/291, with the sunken road running parallel to the front at the line of departure. The 899th Field Artillery Battalion, reinforced, will fire a 10-minute preparation from H-10 to H, and fire on-call after H hour. 2/291 will be on the left, 1/291, on the right. Charlie-291 will protect the right flank of the 291-RTC. Battalions will seize high ground north of Vielsalm and be prepared to continue the attack to the southeast and seize Ville-du-Bois and Petit-Thier while Charlie-291 will seize the high ground 1500 Meters south of the Line of Departure on order.

The Line of Departure will be the sunken road now help by the 3/291, H hour will be 0730 on Jan 15. The battalion will cross the Line of Departure with Able Co on the left, Baker Co on the right, and Charlie Co echeloned to the right rear of Baker Co. Able and Baker will seize the high ground in their zone of action, 1500 Meters south of the Line of Departure, and be prepared to continue the attack to the southeast on order. Charlie Co will protect the right flank of the 291-RCT, and be prepared to seize the high ground overlooking the Salm River south of the village of Hourt. Dog Co will attach one heavy machine gun section to each of the rifle companies, remaining section to remain in general support. The 81-MM Mortar Plat. to be in general support of the battalion, and one forward observer will have to be with each rifle company. The AT Plat. will establish a roadblock at the south edge of Hourt after H hour. Attachments are effective as of now, and each company will move to the Line of Departure independently, companies will coordinate their move to the Line of Departure through battalion headquarters.

Prisoners captured by the 3/290 on Jan 13 had identified the Germans holding the wood line southeast of Grand Halleux as the 752.Volksgrenadier-Regiment. Earlier intelligences reports indicated that elements of the 62.Infantry-Division, 326.Volksgrenadier-Division and 9.SS-Panzer-Division were operating in the vicinity of Vielsalm.

The Charlie Co Commander called his Executive Officer, telling him to have the platoon leaders and sergeants at the company Command Post by 2030. Dog Co Commander stated that the section leaders of the Heavy Machine Gun Section would be at Charlie Co by 2030. As Charlie Co had been sitting for 4 days directly across the Salm River from their objective, all members were fully informed on the terrain over which they would move on Jan 15. Charlie Co would cross the Line of Departure, the sunken road in the 3/291 sector, following the right rear of the right attack platoon of Baker Co. The time of the crossing was based upon the situation of Baker Co.

The company would be echeloned to the right rear by platoons, in order, 1st Platoon, Light Machine Gun Section, 2nd Platoon, Heavy Machine Gun Section, and finally, 3rd Platoon. The Company Commander would be at the rear of the 1st Plat., the 60-MM Mortar Section, and the Company Headquarters Group behind the 2d Plat. One bazooka team was attached to each rifle platoon. The 1st Plat. will maintain contact with Baker Co, the 3rd Plat. will have one squad ready on call for patrolling when required. The 899-FAB reinforced will fire on call thereafter. Each rifleman will carry two bandoleers of ammunition, the BAR (Browning Automatic Rifle) teams a full load for the guns, while company transportation will carry LMG (.30), HMG (.50), and 60-MM Mortars to the Chapel, at the south edge of Grand Halleux.

The tentative plan for movement to the Line of Departure will be columns of platoons: 1st Platoon, LMG Section, 2nd Platoon, HQs Co, 60-MM Mortar Section, 3rd Platoon. IP Command Post, time 0500. Route recon to the Line of Departure will be made by the 1st and 4th Platoon Leaders and the Company Commander. Recon was made of the routes to the Line of Departure, plans coordinated with Battalion S3, and the time of crossing of the Initial Point had to be set up to 0445 to allow Baker Co to clear through Charlie Co’s area at 0500. Platoons were notified of the change of the time of crossing the Initial Point. At 0445, the 1st Platoon crossed, and each section and platoon was picked up as the column passed. The 3rd Platoon was slow in forming as two of its members had been allowed to sleep until the platoon was forming and had not secured their equipment. Charlie Co cleared the area before Baker Co’s column entry into the area. The movement to the Line of Departure was uneventful, Charlie closed into its forward assembly area at 0710, mortar and machine-gun squads were sent after their weapons and ammunition and by 0725 had returned to the assembly area. 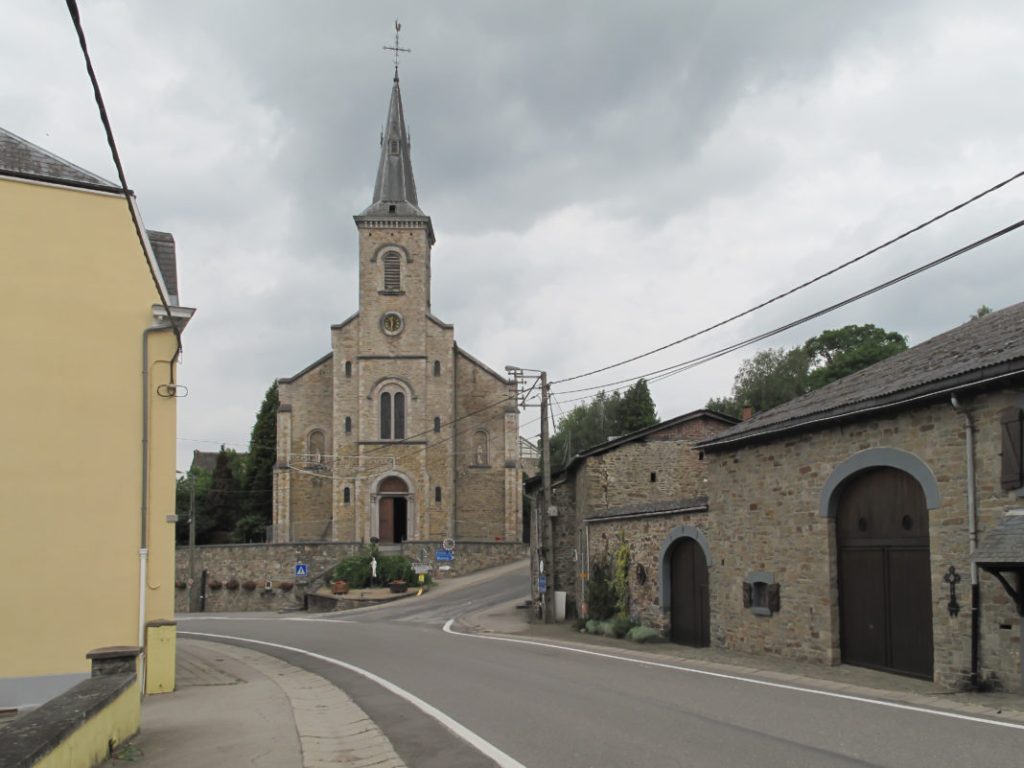