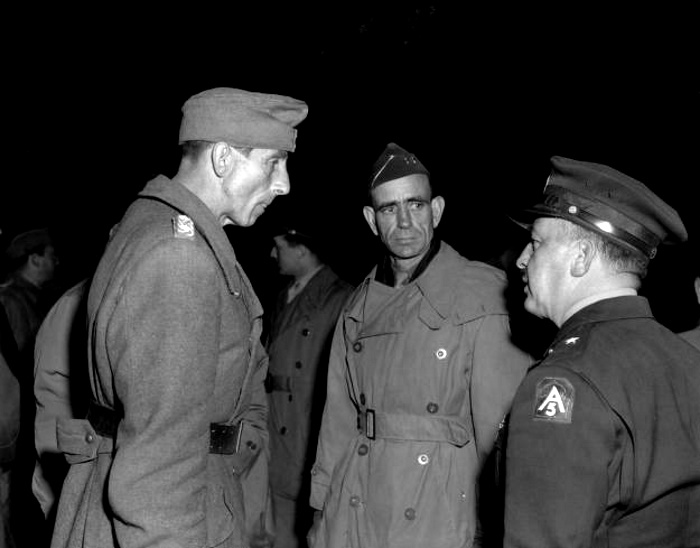 General der Panzertruppe von Senger, Commanding General of the XIV Panzer Corps in Italy, made the following observations with reference to Tank and Infantry warfare.

(1) Tank Warfare. Our problem earlier in the war was that of fixing a tank model for large-scale mass production. We were aware all the time that once we had decided on our model we would have to stick to it and that a smaller army might have better and more modern equipment (ex. the Austrian Army before the Anschluss), though lesser quantity. In our rapid rearmament, we built a tremendous number of new tanks, giving us an enormous advantage over the older armies of Europe, ex. Poland and France. The conquest of Poland and France furthermore gave up a large industrial potential for the reproduction of modern equipment. 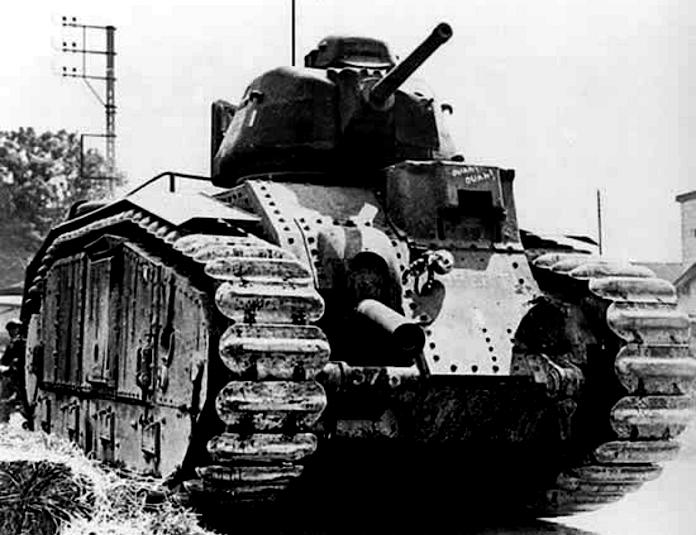 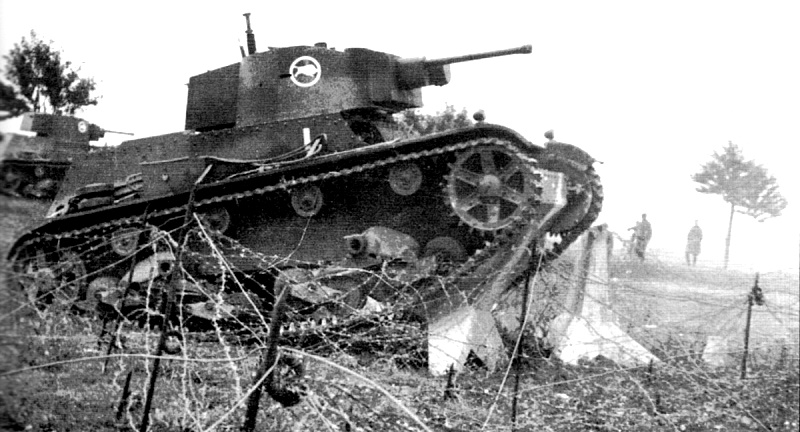 Our problem now was whether to stick to the old original type which had won us our initial victories and produce three or four times as many as we could produce of a new model, or whether we should change every three or four months to new and faster models like the Tiger, the King Tiger, etc. The United States and Russia decided on the former policy – the production of standard models such as the US Sherman and the Russian T-34. We decided, disastrously, on the latter course, with the result that our tanks were better, faster, but fewer.

The course of modern war is determined not by the battle but by large-scale industrial output; not by a small quantity of new and superior weapons designed to win battles but by an overwhelming quantity of standard weapons produced in large numbers, designed to overrun the enemy forces. Unfortunately, after the rearmament of our enemies with newer types of tanks than our own, we resolved to build new models rather than concentrate on mass production of the old ones. The coincidence of this policy with Allied strategic bombardment resulted in a constant tank shortage from which we never recovered. Toward the end of the war, Hitler admitted the disastrous consequences of this policy. 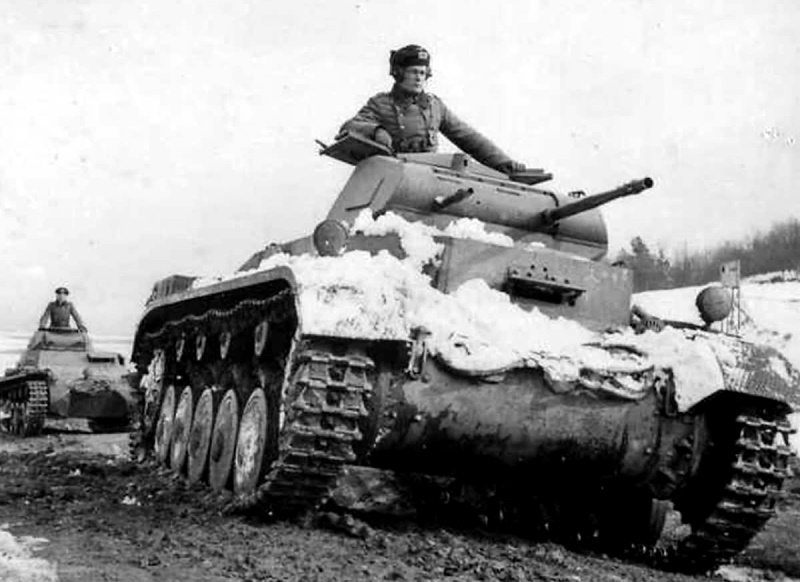 When I had the task of attempting to rescue the von Paulus 6.Army at Stalingrad, I had the first new Tigers – all ten of them! I would have given anything for 50 of the old type. On the other hand, the Russian standard tank, the T-34, was produced in enormous quantities so that it could be organized into separate tank brigades rather than incorporated into a division. Thus, the flexibility of the tank as a shock weapon could be reserved and at any moment, as a new conflict developed, a strong force of tanks could be rushed in an enormous quantity to the centers of gravity.

At the beginning of the war, the theory of the mechanized division, to all intents and purposes tank divisions which had been developed by General Fuller and other British Generals, proved effective. It succeeded extremely well against any enemy who could not put up sufficient organized forces. However, the mechanized division was organized merely for offensive purposes, for shock action only, and not for all kinds of warfare. 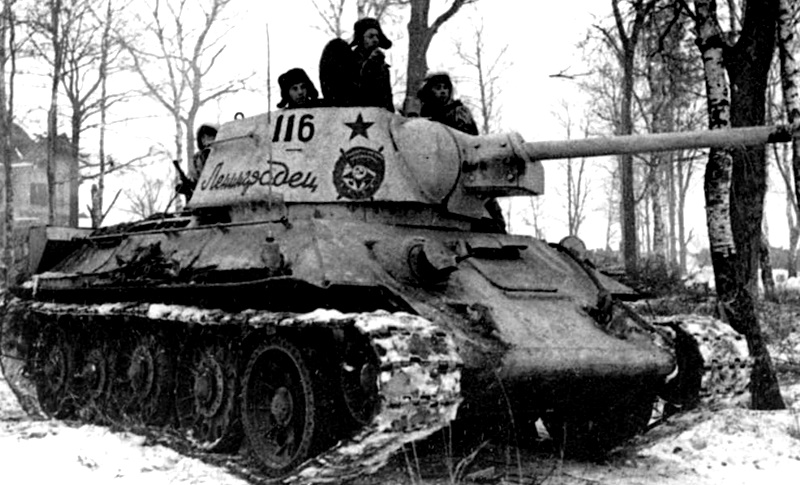 As always in the history of war inventions, the invention of a new shock weapon is followed immediately by a period of the development of defensive weapons designed to render useless this new offensive weapon. For example, your airborne radar was developed to nullify the threat of our submarine action to your war effort. As far as the tank is concerned, it is relatively easy to develop anti-tank weapons. Russia developed antitank guns in such quantity and with such mobility, that on discovering a projected German tank attack, they had only to rush their guns rapidly across the country on trucks to the battlefield.

So successful were the Russians in the development of antitank measures that the idea of tank divisions became absurd. 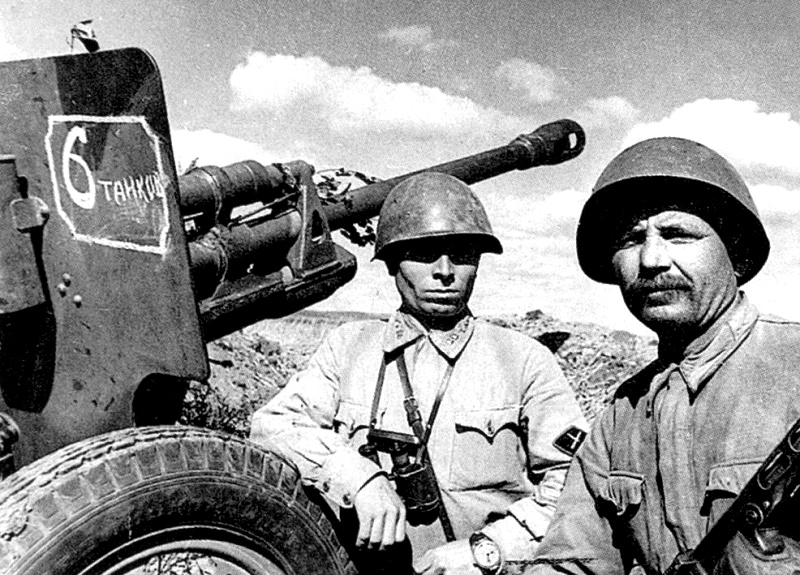 The only areas actually suited for large-scale tank operations are generally areas in which the battle is waged on large fronts, flat unbroken stretches of even terrain. In this war for example, Africa and Russia were areas most suited for tank warfare. In order to stop an army tank attack on a large front, it is necessary to have sufficient tanks to spread over a large area to meet any eventuality or surprise offensive. Thus, infantry divisions should be equipped with tanks and antitank weapons. For each infantry division, the commander should have at least one tank battalion and sufficient material reserves to fill the tank losses.

The tank has met the fate of all shock weapons. From its employment as a sort of land cruiser, it has become an auxiliary arm to artillery and infantry. Just as in the air war, you require air-ground cooperation, so on the ground, you require a combination of all modern weapons, infantry, artillery, and tanks. If your enemy uses tanks, then you require them also. Thus the necessary requirements for tank operations are sufficient tanks to disperse over a large area. This entails a large quantity of dead waste, ex. tanks which will never actually be used in combat but must nevertheless be deployed on the front to meet any surprise attack and to force the enemy to pin down some of his own tank forces, and, most important, security of home production. If you can not safeguard production from air attacks, you can not fight a tank war. In this war, the only industrial areas strategically safe from air attack were the areas beyond the Atlantic and behind the Urals. The German tank war was, with reservations, lost in the factories. 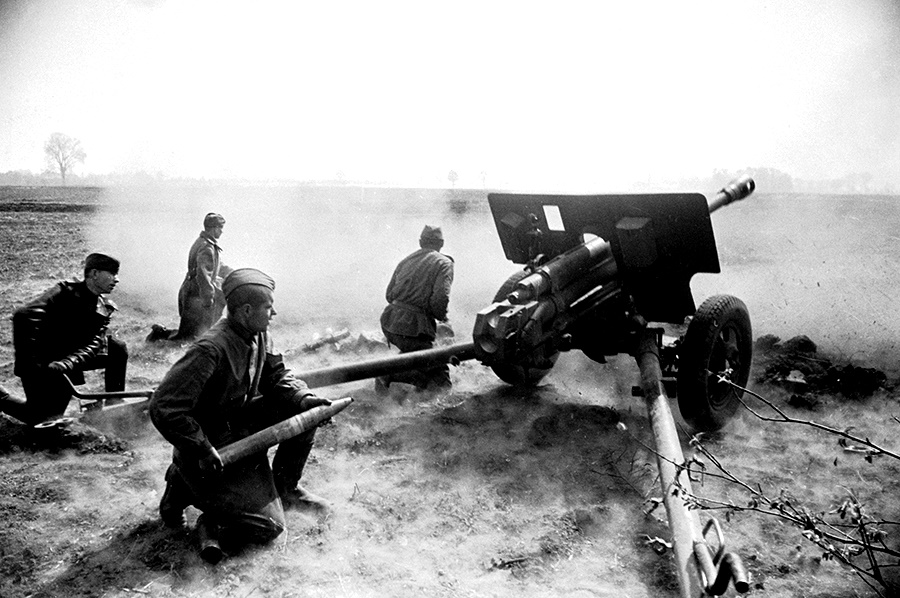 Another factor in our inability to construct sufficient tanks each month to meet our requirements was the shortage of raw materials. We lacked sufficient manganese and other components for ferrous alloys, and what we did have on hand had to be distributed among the air force, navy, and ground forces for the production of planes, submarines, and tanks. We never had sufficient tanks for critical operations. I entered the Stalingrad battle with 90 tanks, but I could not supply each infantry division with 30 tanks, as I should have done, nor fill my operational losses. I had two tank battalions where I should have had four or five.

Whether the tank forces dispersed over a large battlefront are actually divided among infantry units, for example, infantry division, or whether they remain under the control and at the disposal of the tank commander behind the front (ex. the Russian and American system), is a minor technicality, though, in my opinion, the latter policy is preferable. Because of the shortage of tanks our armored forces were to be used to help the infantry in the event of enemy attack – a purely defensive conception. Even if a nation’s centers of production are safe from air power, it would still be preferable to concentrate on mass production of standard types of tanks – rather than restrict production through developing new super tanks in small quantities, which will become obsolete within a few months. The mistakes we made in our tank production policy we repeated in our production of aircraft. Milch had the reputation of being highly inefficient. Through experimenting with new super weapons and new types of aircraft, mass production of standard types was sacrificed. 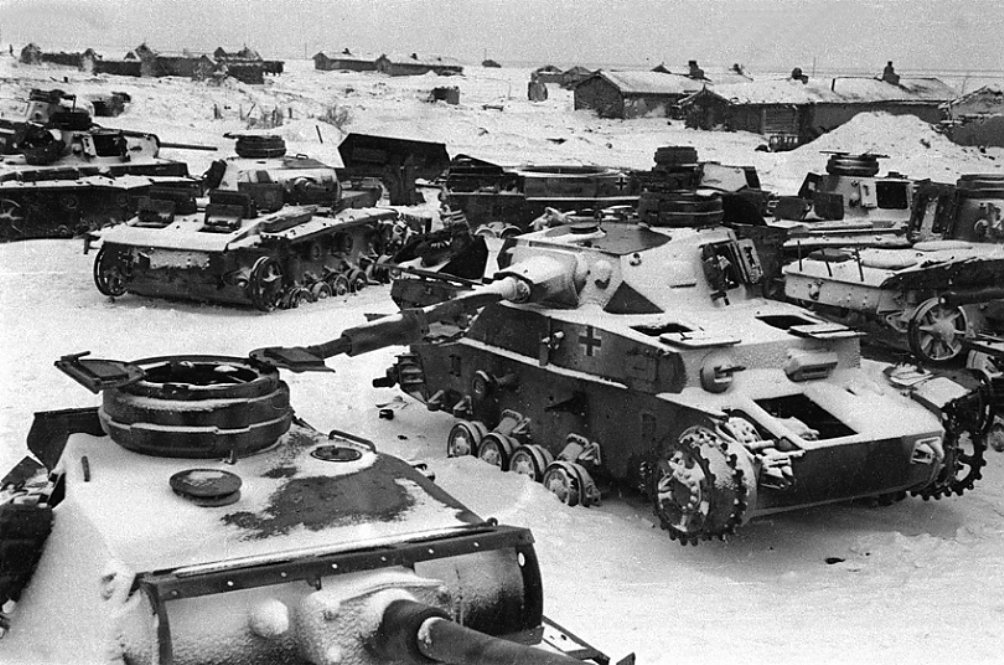 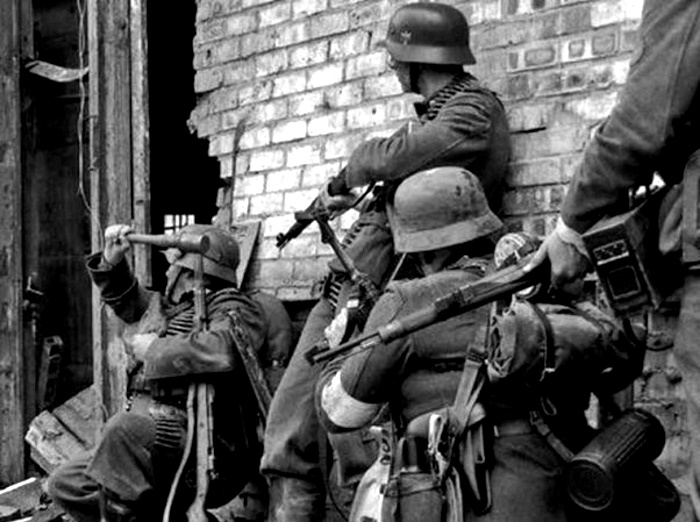 (2) Infantry Difficulties. War is becoming increasingly a logistical war, and the importance of the fighting man – infantryman – is becoming less and less. Accordingly, the composition of infantry organizations in this war was very different from that of the last war. Formerly, infantrymen composed 60 percent of a division, now only 40 percent. Because the infantryman is becoming less decisive in the war and accordingly, less able to combat modern mechanized equipment, infantry losses have been exceedingly high. Toward the end of the war, because of high infantry losses, we were told to replace losses to the infantry from the other branches, the so-called auxiliary branches. Our difficulties were memorable. Servicemen of the auxiliary cannot be converted overnight to frontline infantrymen.

From 1942 on, the division could no longer count on having a well-trained body of men 20-30 years of age as infantrymen. The total exhaustion of manpower made it impossible to fill our losses. We had to use 16-year-old children at AA batteries. Women were employed in office jobs almost up to the front line. I have heard that 15 and 16-year-old Hungarians and Yugoslavs were brought to Italy as reserves. There could be no surer evidence of Germany’s defeat than this. When you are forced to train and equip children for infantry positions as reserves and be thus forced to decide the outcome of a battle, you have
already lost the war. 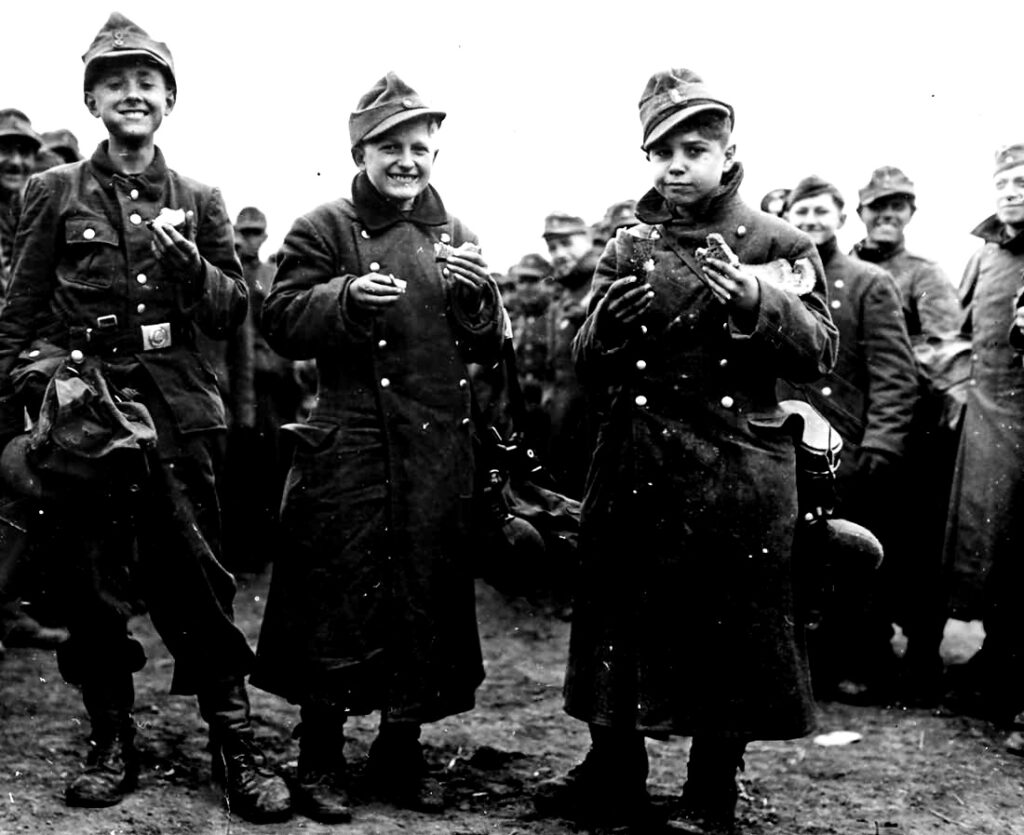