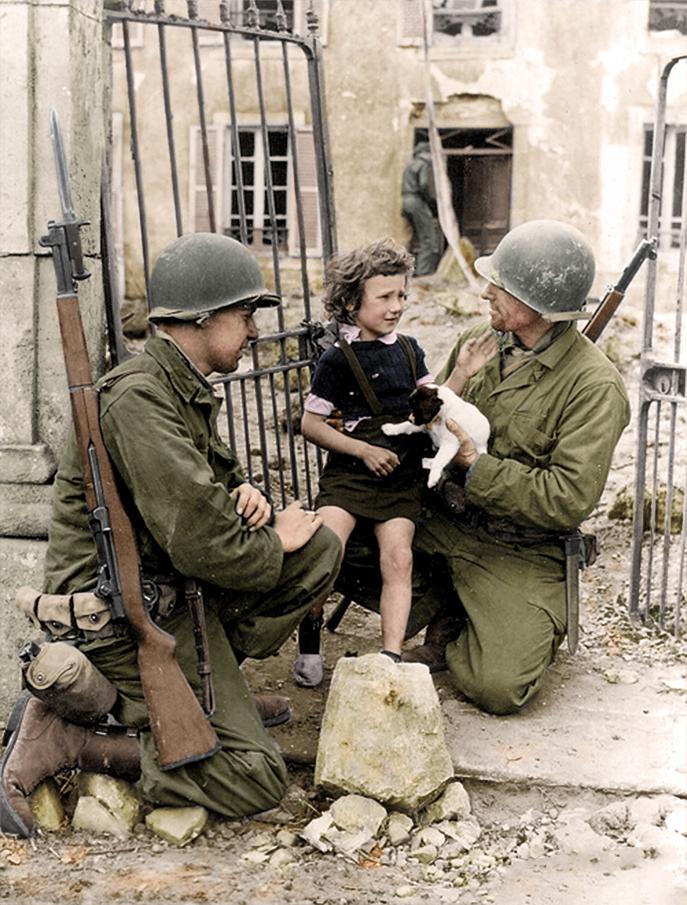 There were many, especially those who on the front lines had no other occupation than to kill enemies, to cling to something from real life, life before the war, life at home, to find a kid or an animal and become attached to it. The stories on this subject are very numerous. I could start writing all the anecdotes I have collected so far since the early 1970s but I still believe that one picture is worth 1000 words 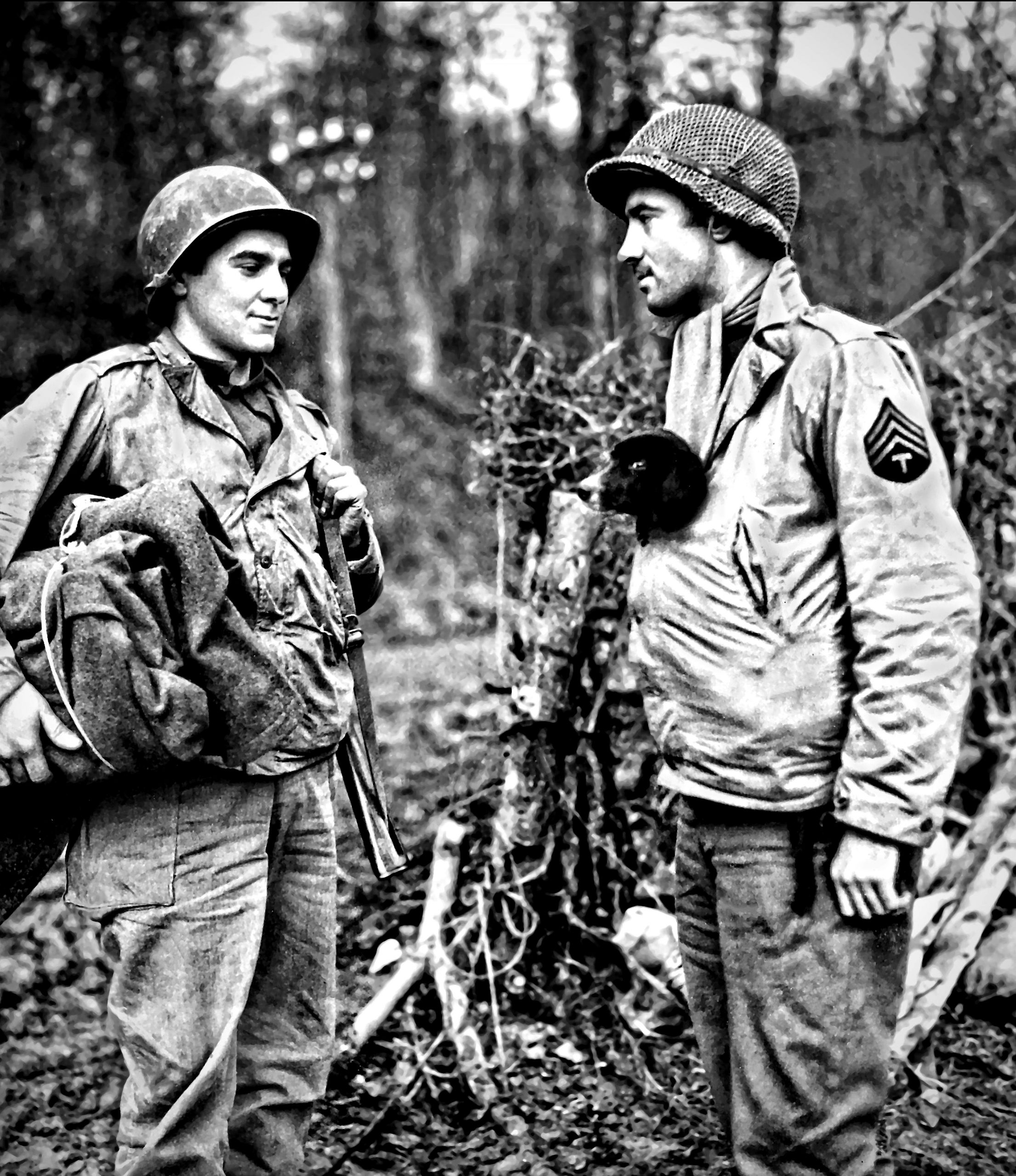 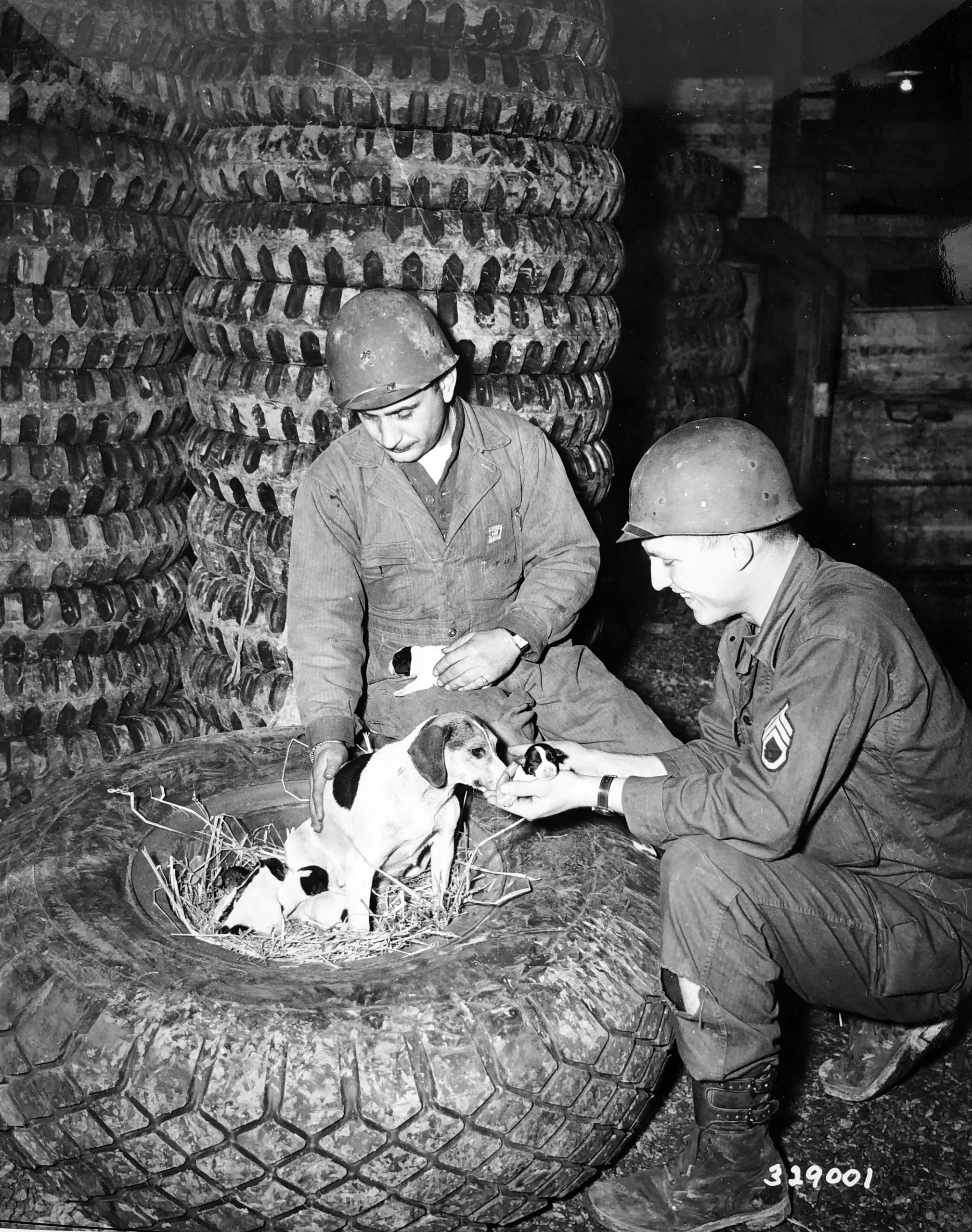 The tires shortage will probably cause the mascot of the 766th Light Maintenance Company, 66th Infantry Division, to move out of their new home, where she had just a littler of pups. Cpl Joseph U. Gabriel, 3270 Sanson St, Philadelphia, Pa, left, and S/Sgt Troy Greene, Metter, Ga, make friends with the new pups, Messac, St Nazaire Sector, France, February 14, 1944 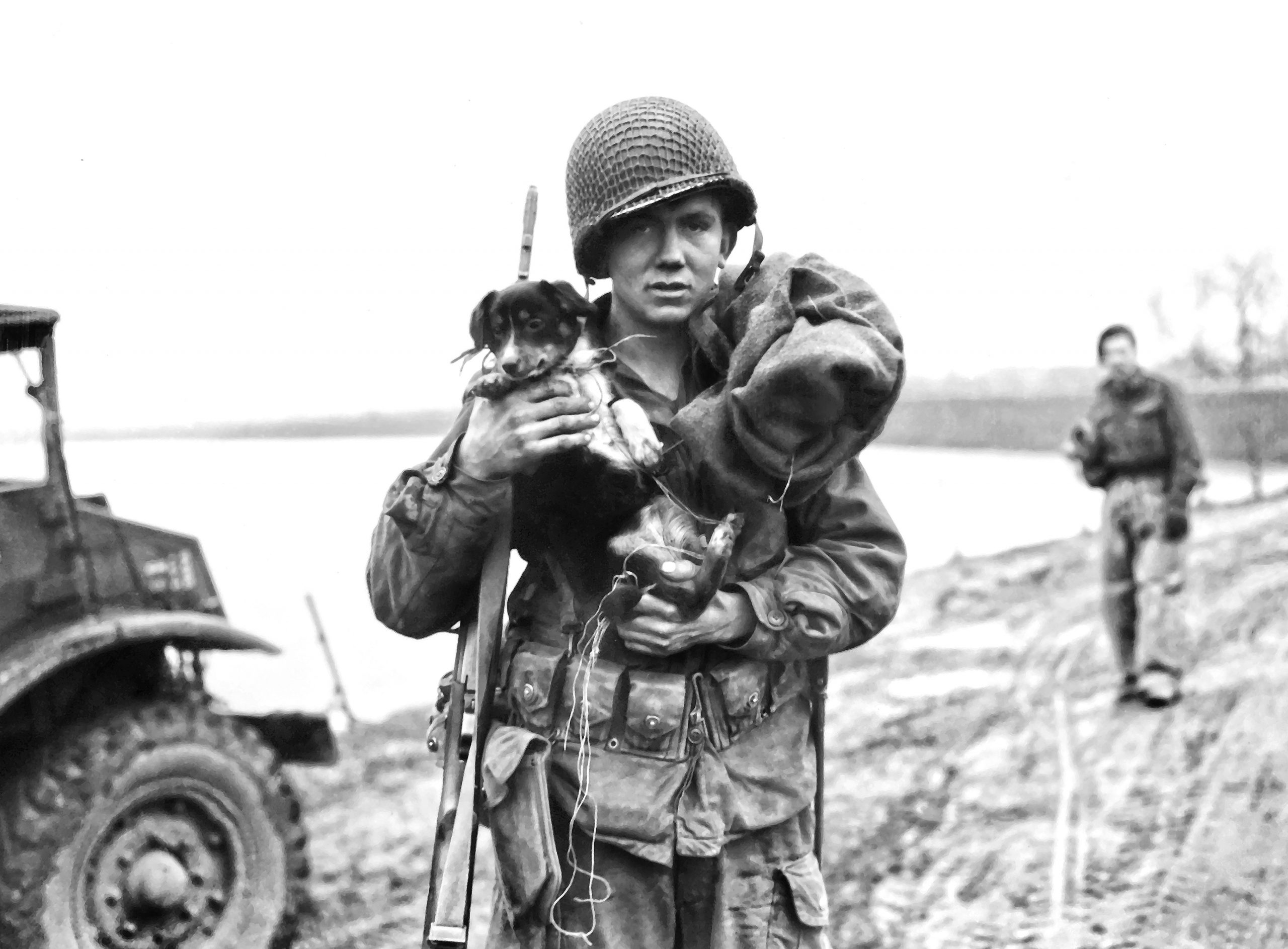 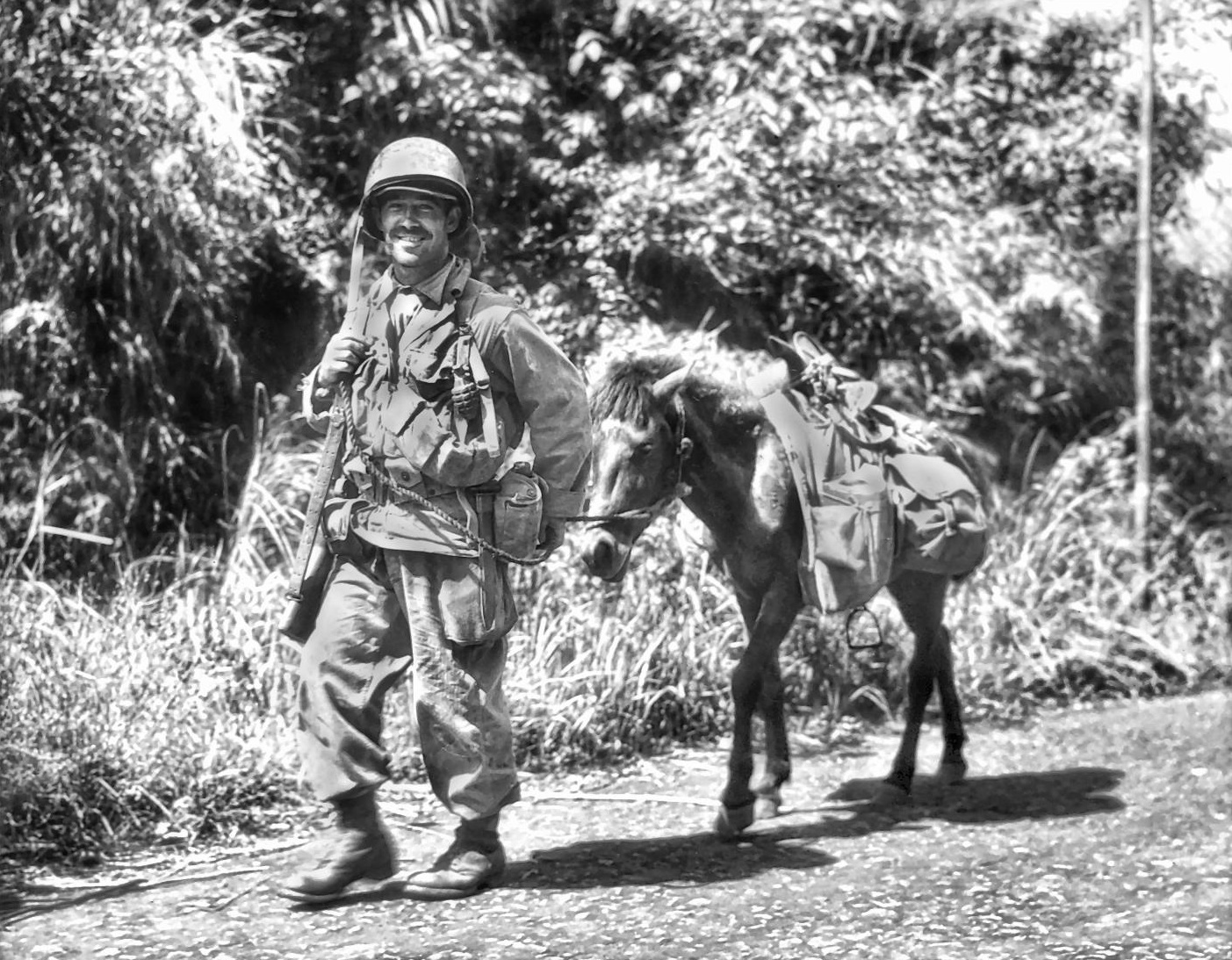 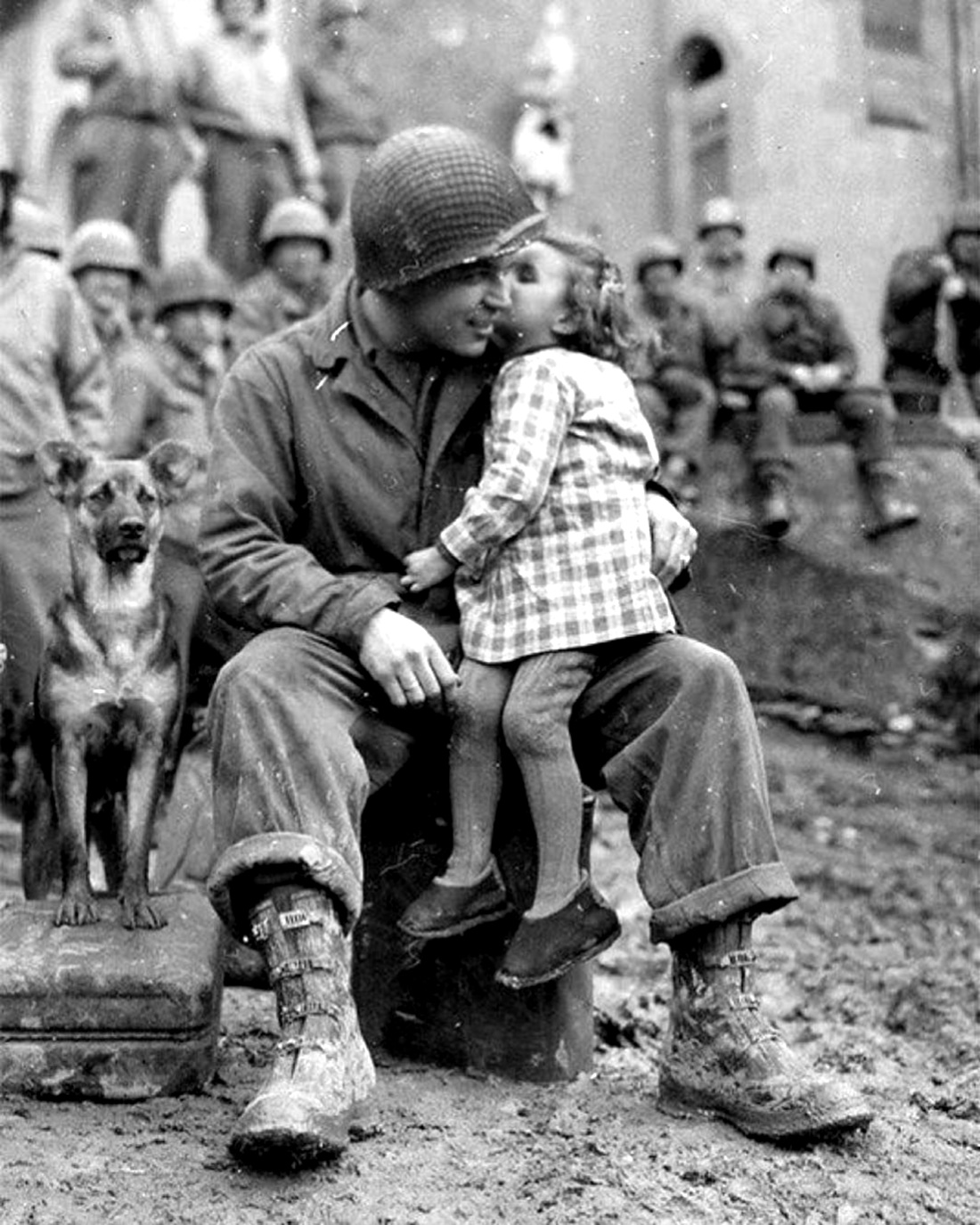 1944. A little French girl kissing an American soldier after the liberation of France from German occupation 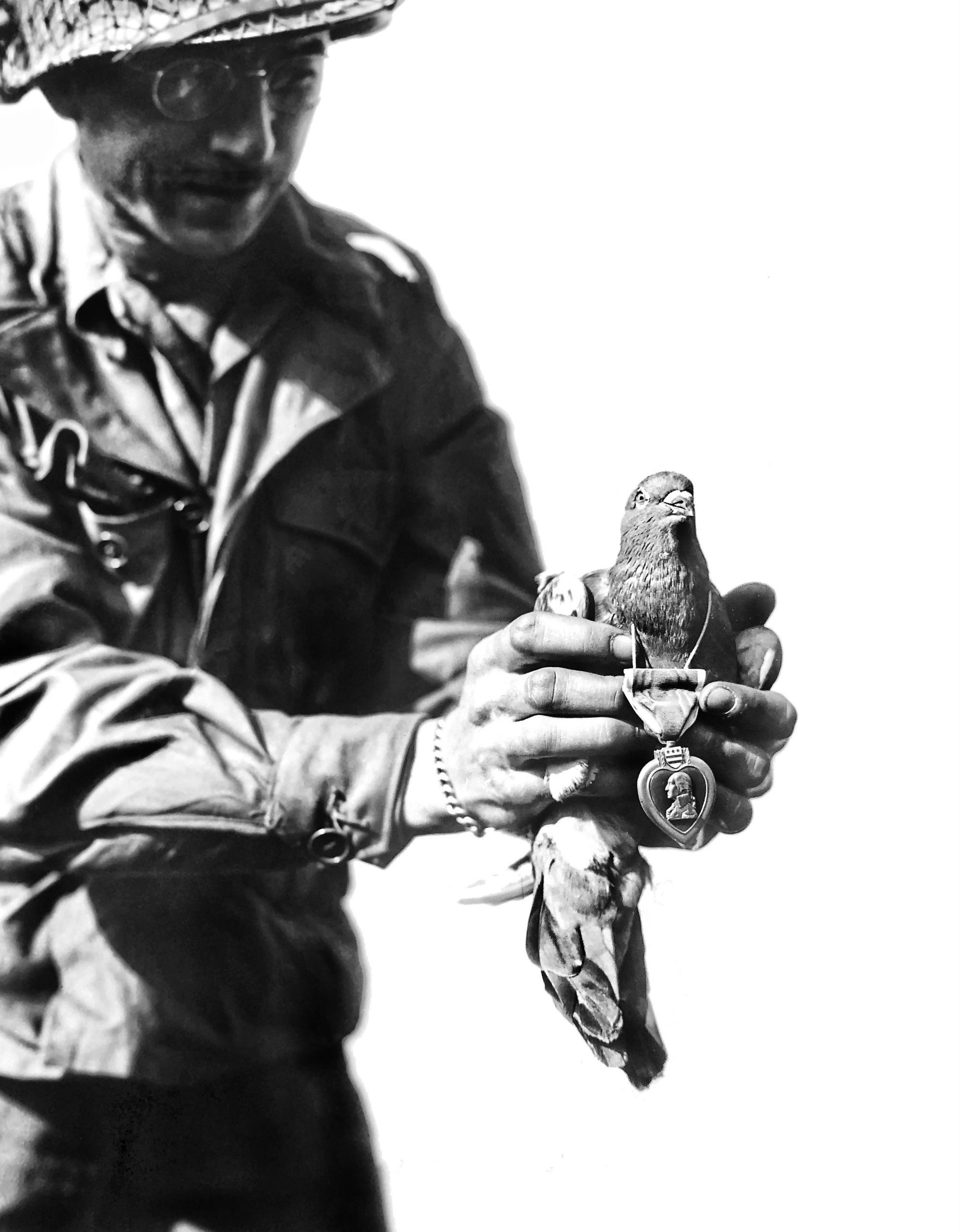 Messenger Pigeon Charlie wears the Purple Heart he earned while on duty over Metz, France, with the 90th Infantry Division. October 11, 1944 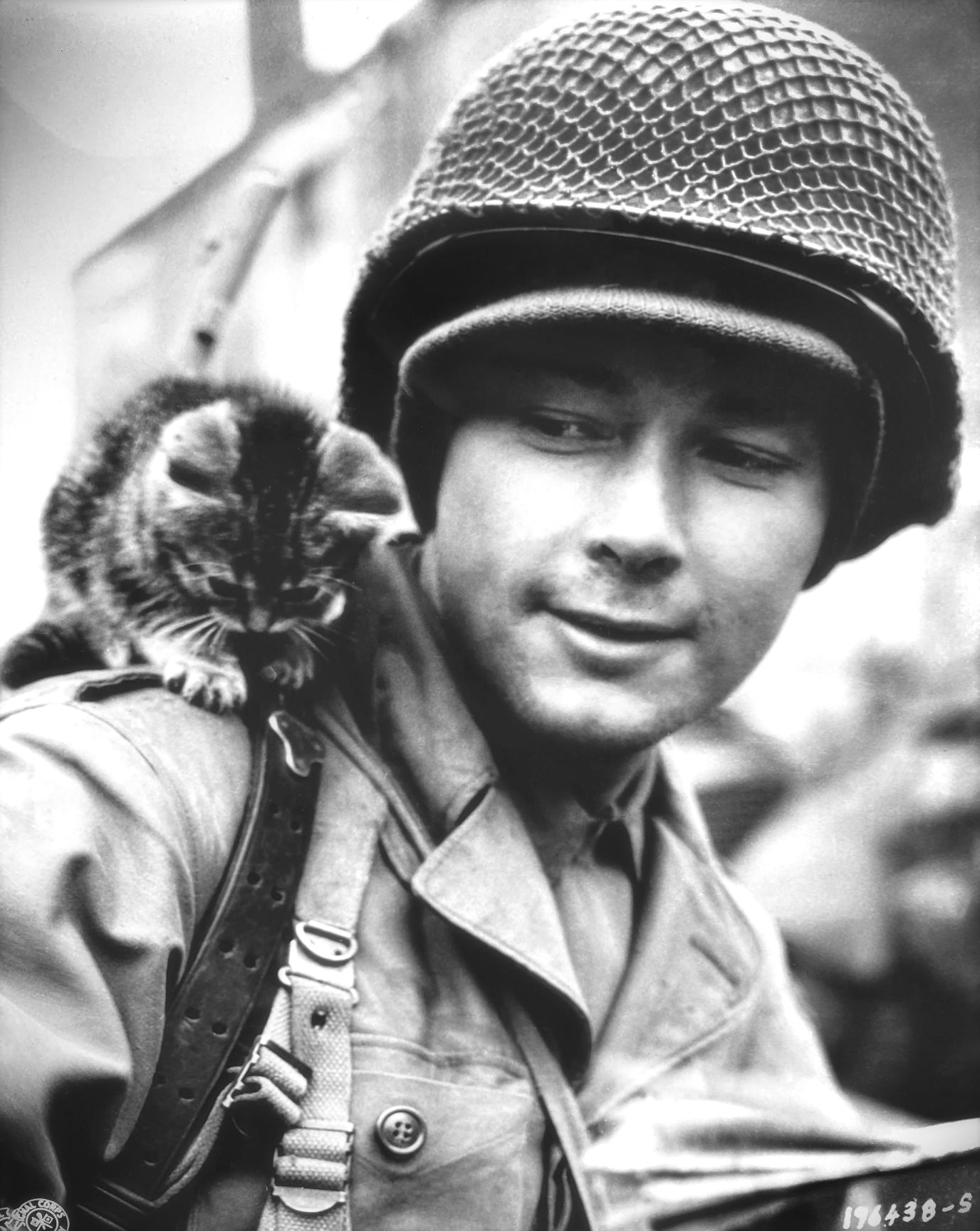 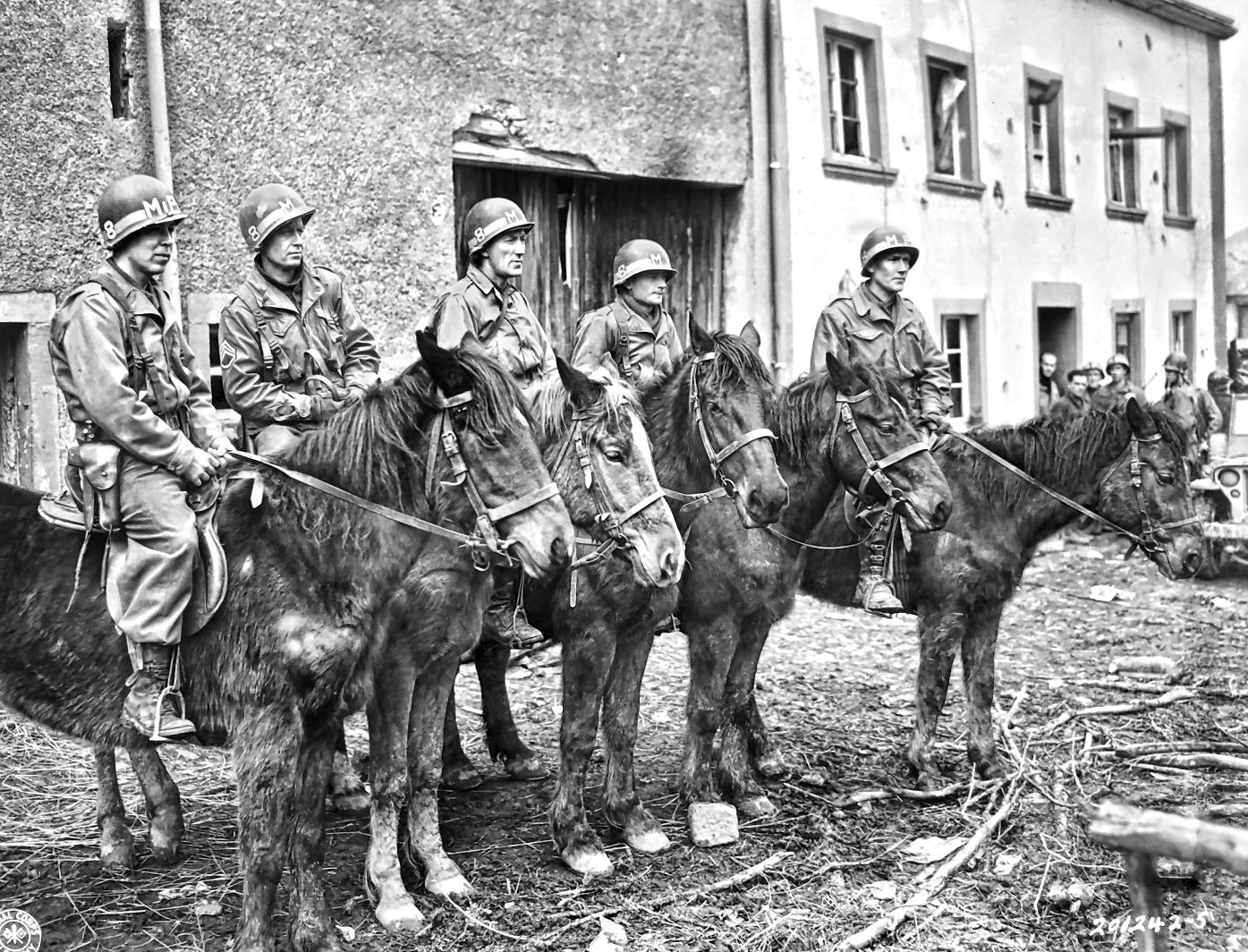 Military Police of the 90th Infantry Division on horses in Arzfeld, Germany, February 25, 1945 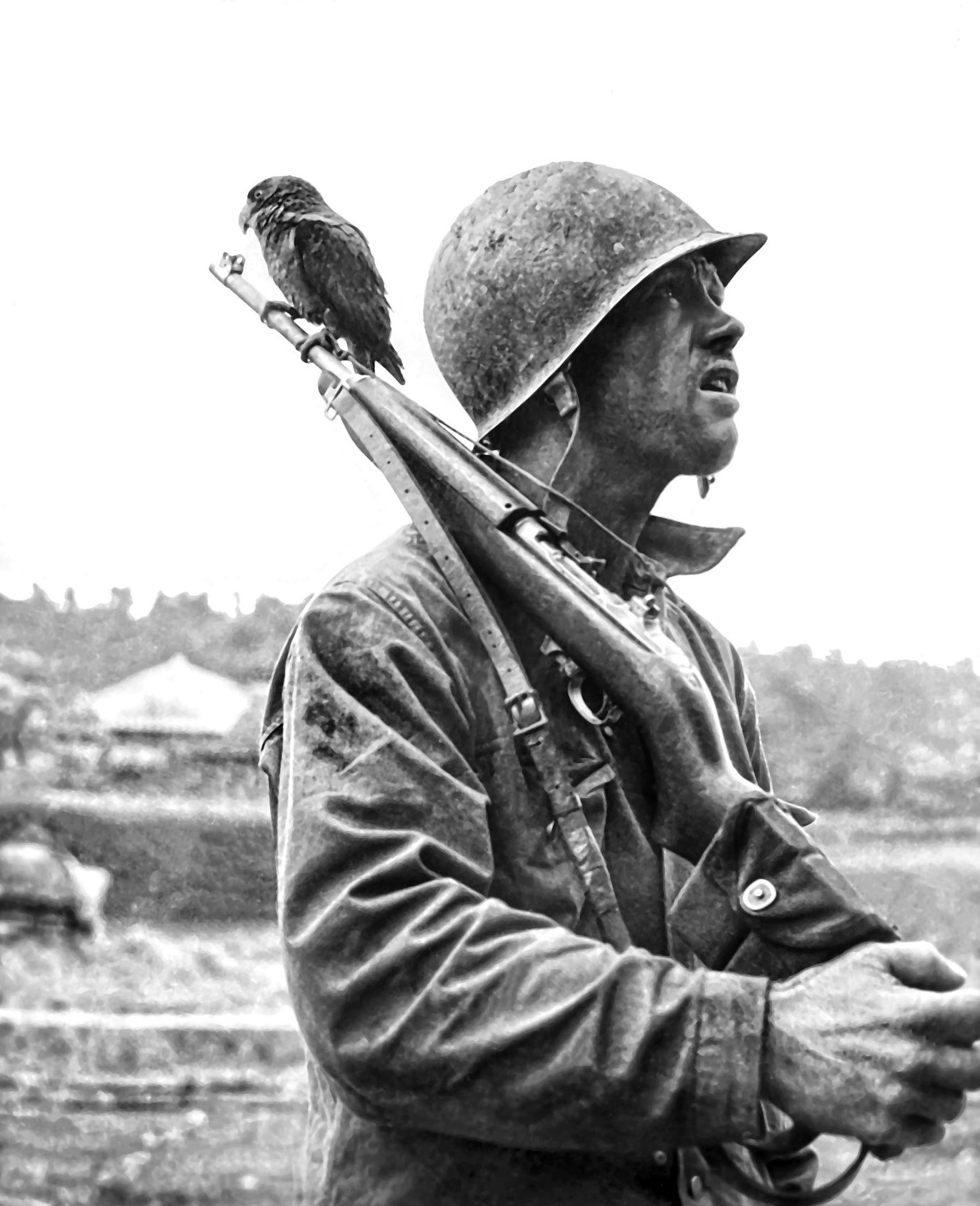 Pfc Albert Rich with the parrot he brought from Leyte, perched on his M-1 Carbine on Okinawa, April 1945 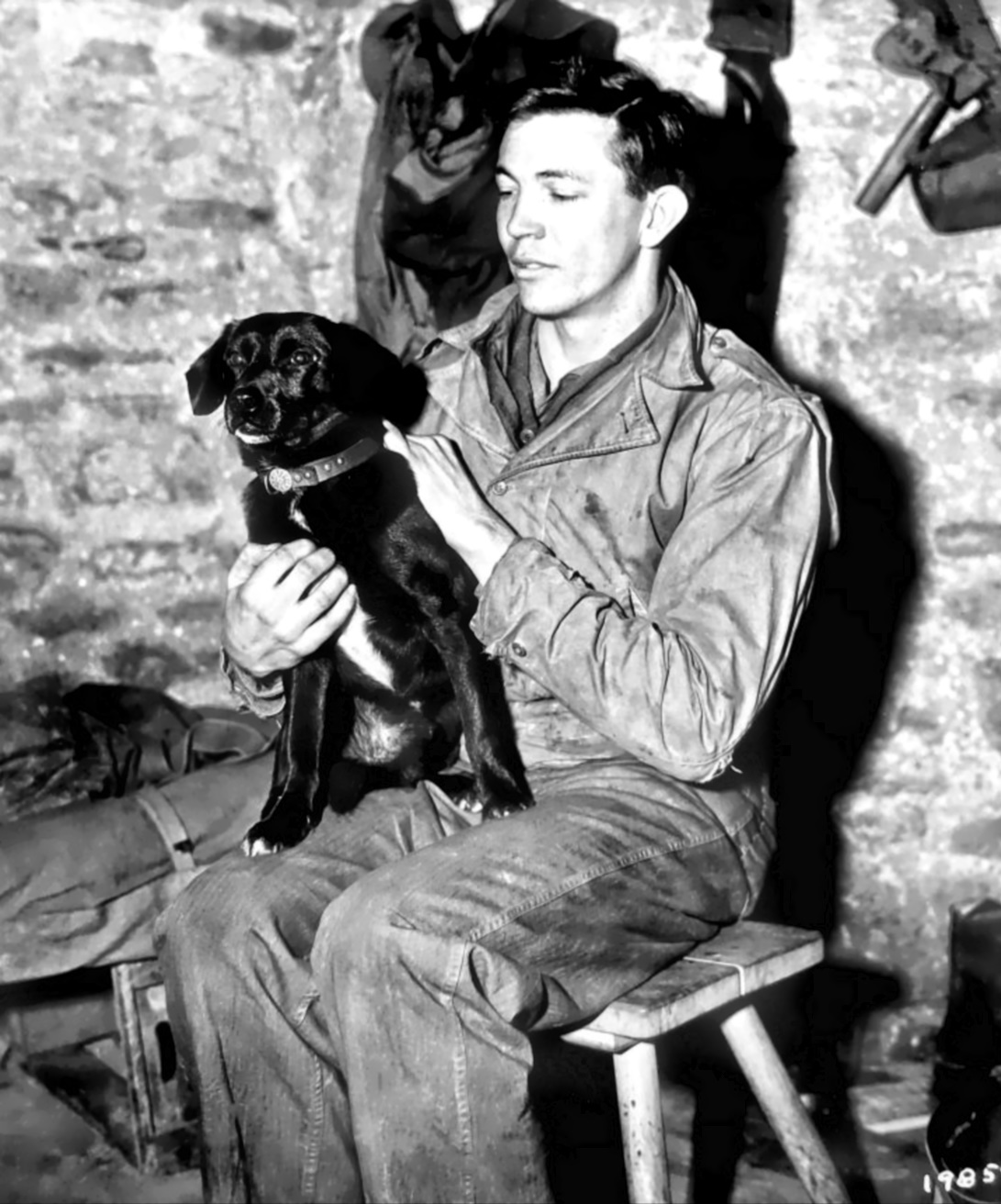 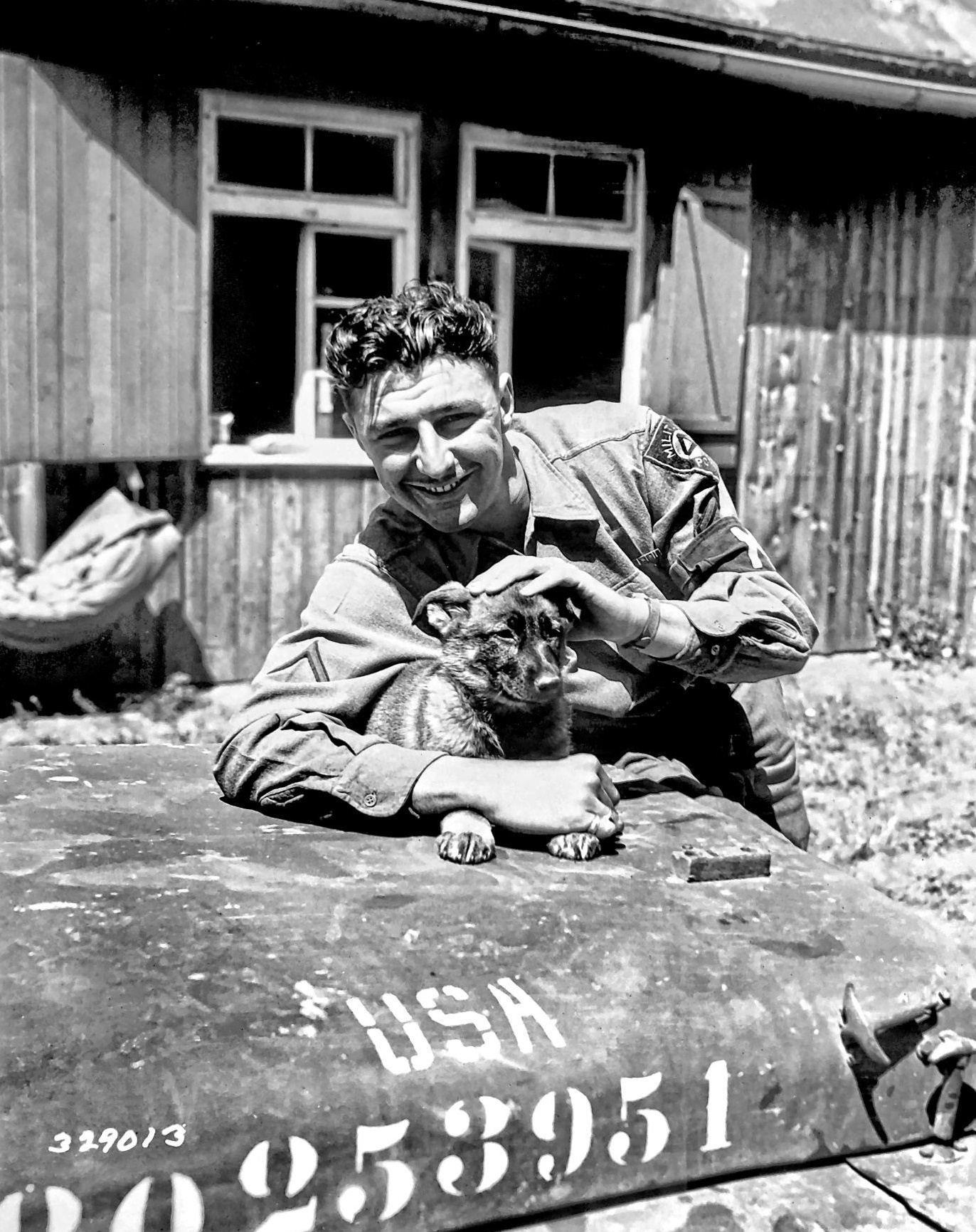 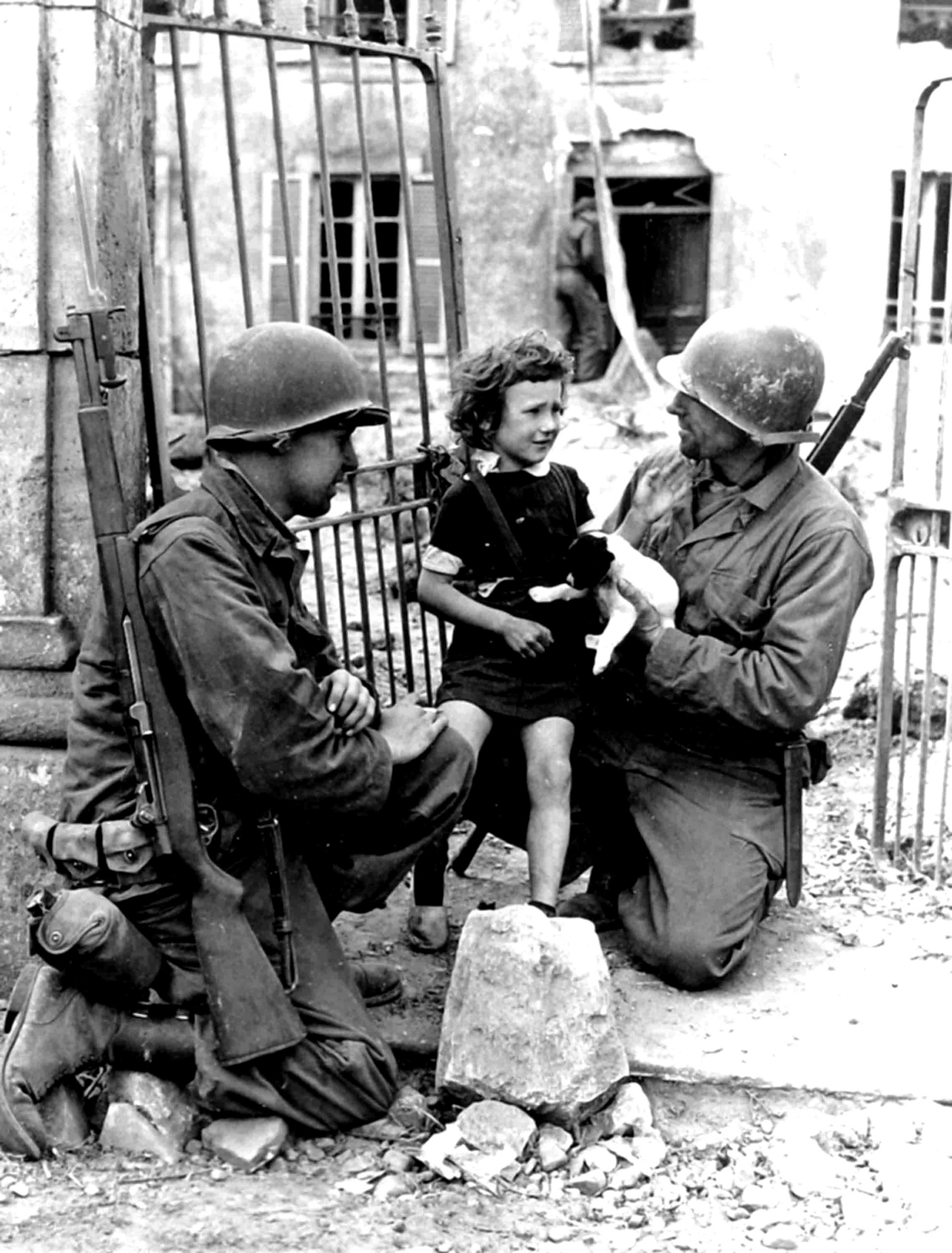 American soldiers soothe a little French girl with a puppy, during the liberation of France, 1944 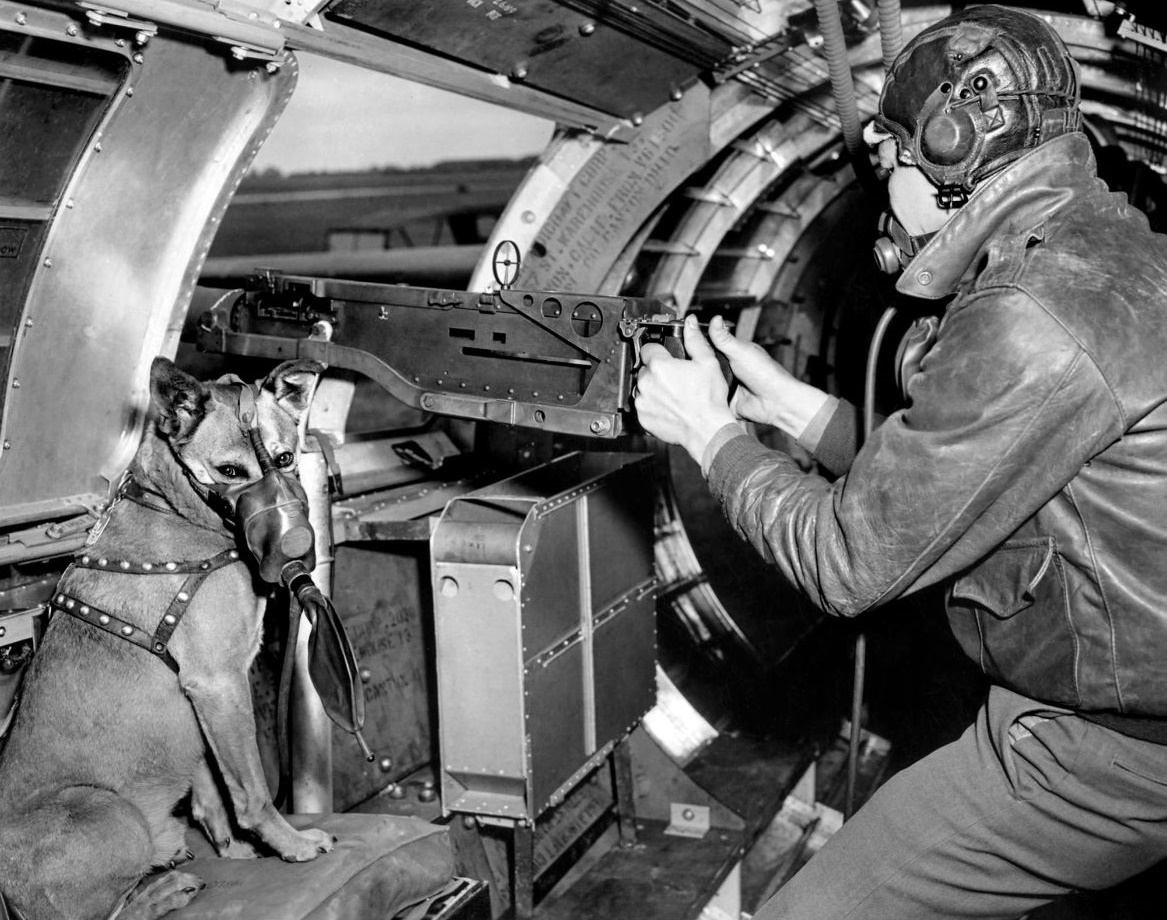 Sgt Harold Rogers and his dog Mister. They completed 25 combat missions over Germany. Sgt Rogers brought the dog home and then returnerd. He was Killed ion Action on July 2, 1944 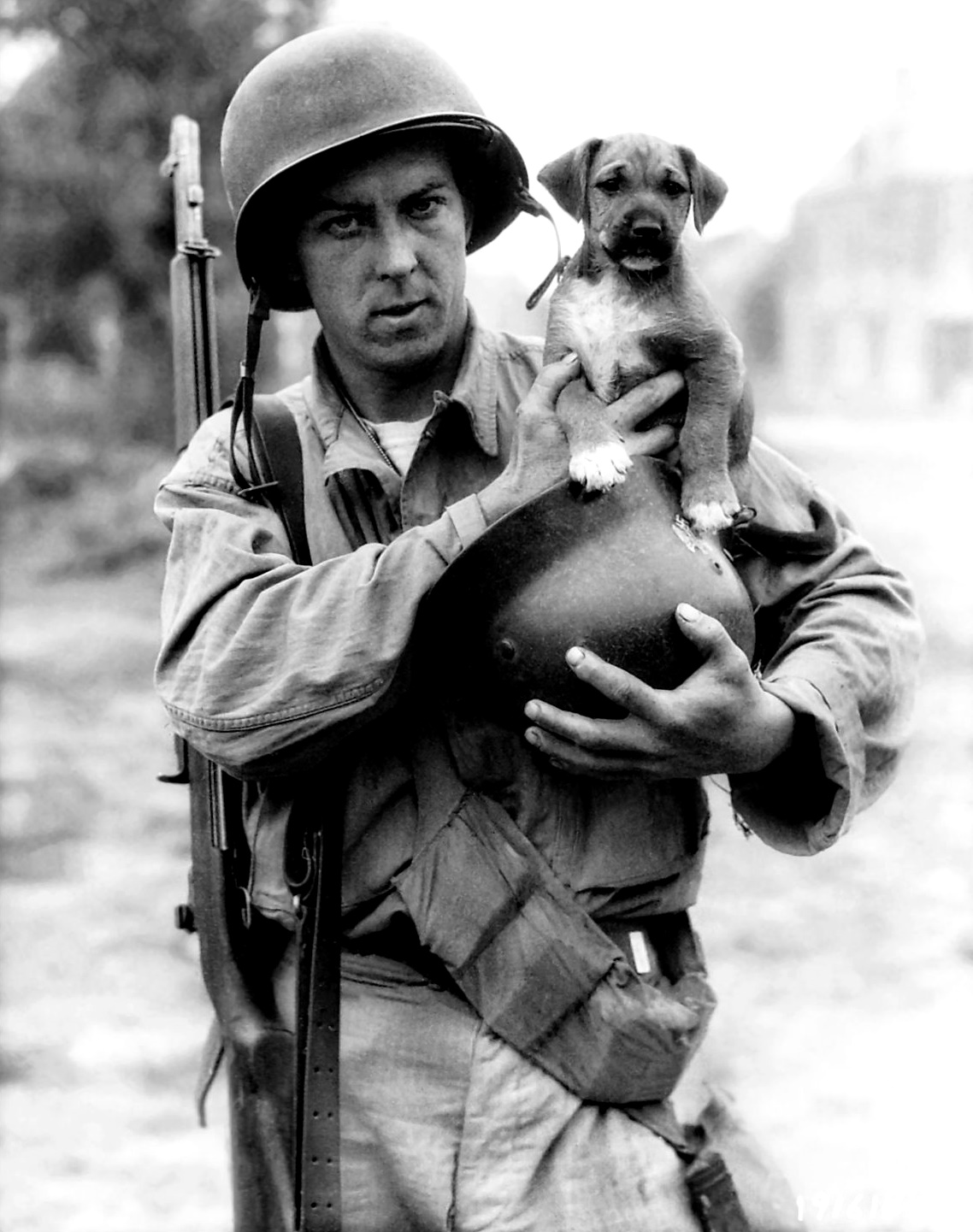 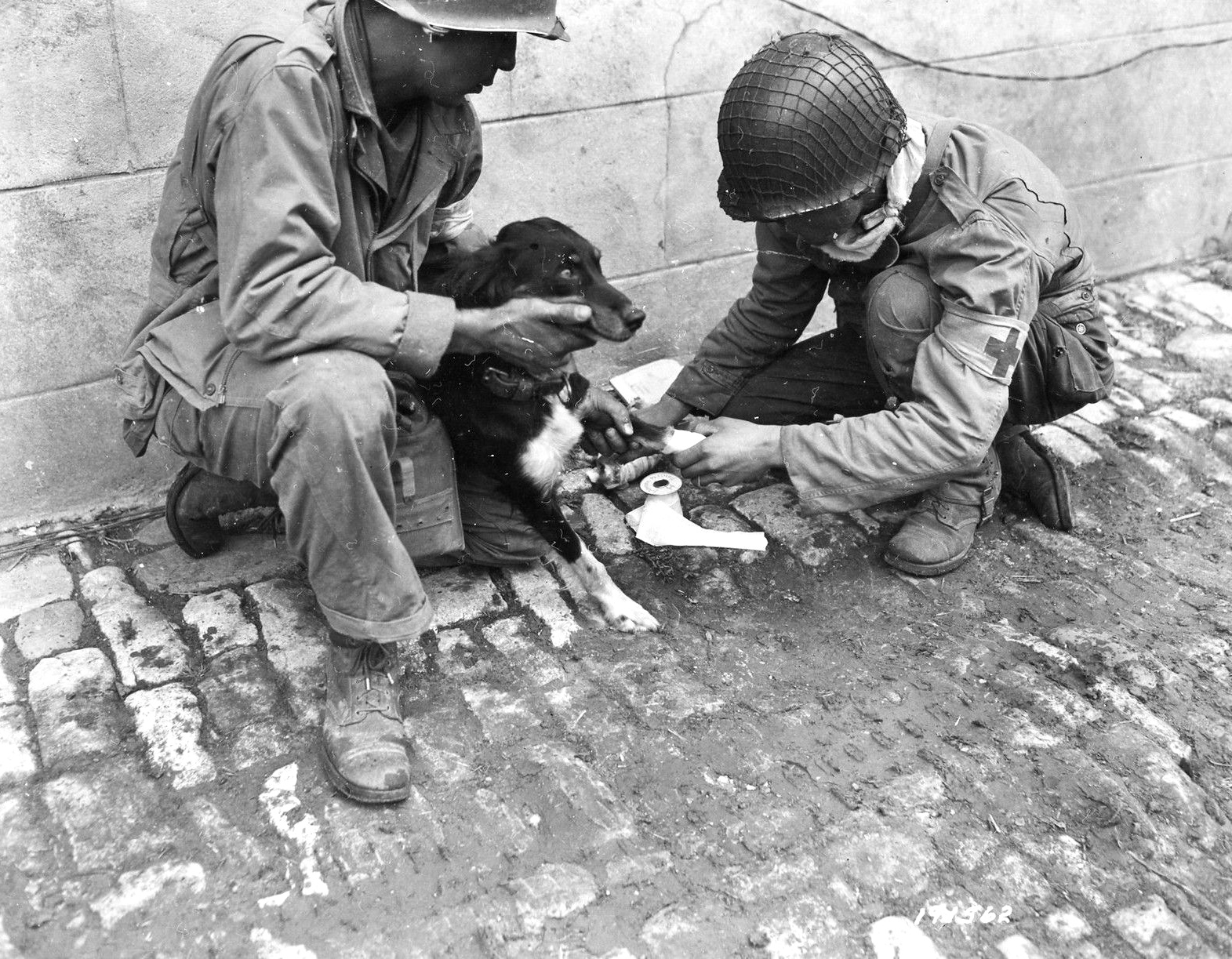 A pair of 1st Army medics working on an injured French dog they had found amid the ruins of Carentan, France on July 1, 1944. Normandy Campaign 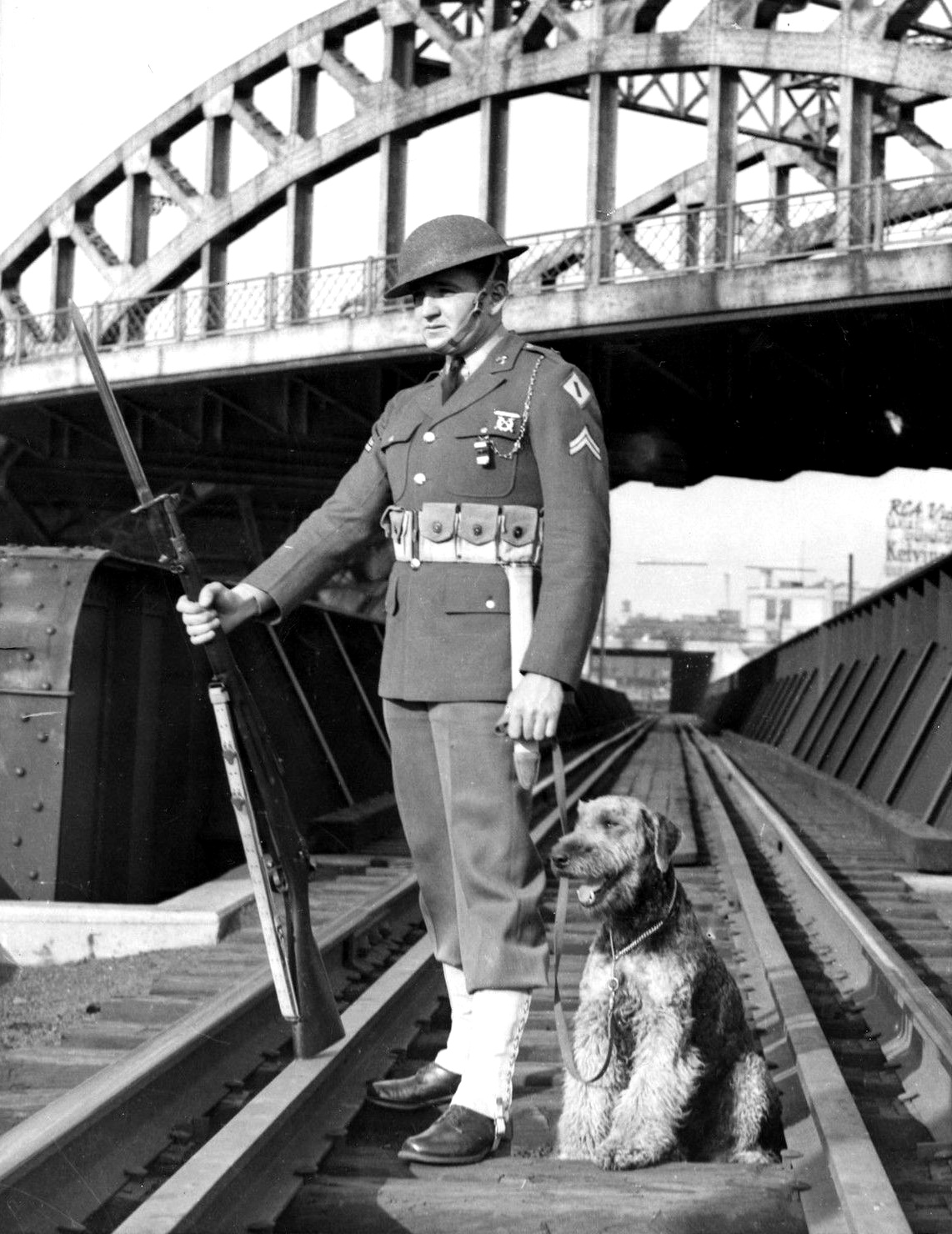 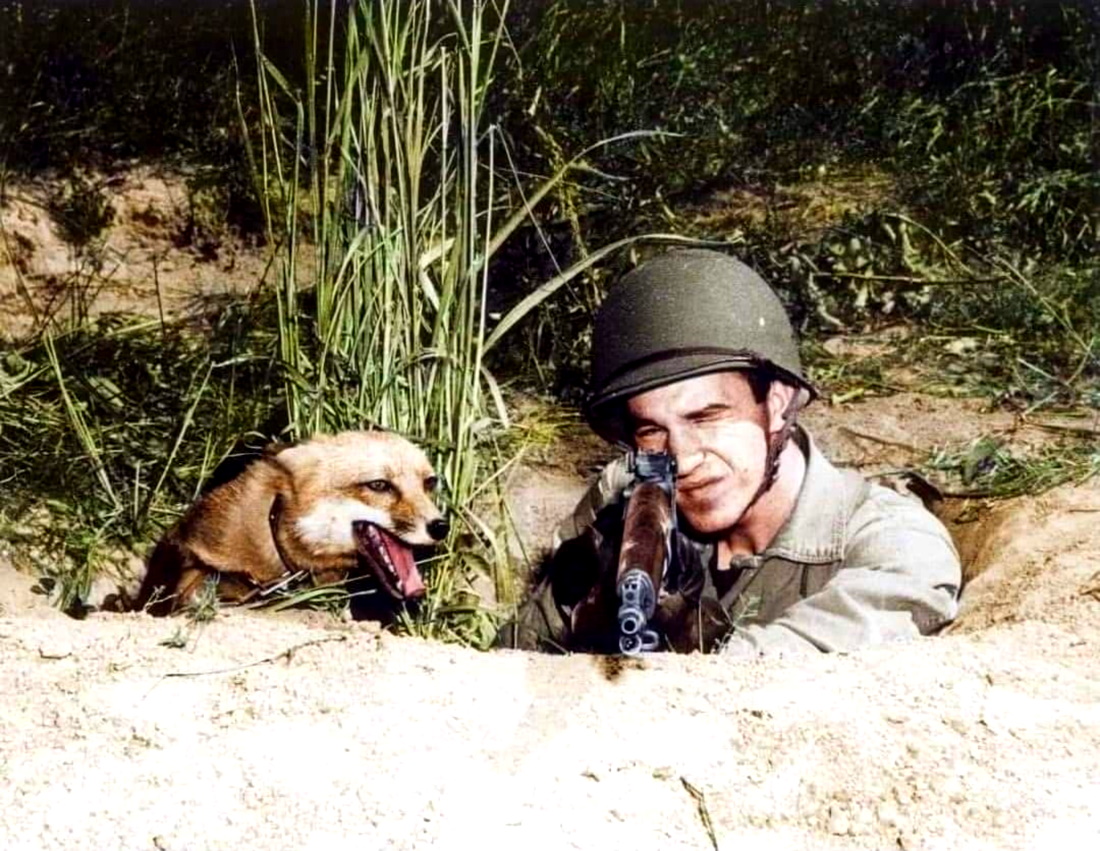 This could be the reason why it’s called a foxhole 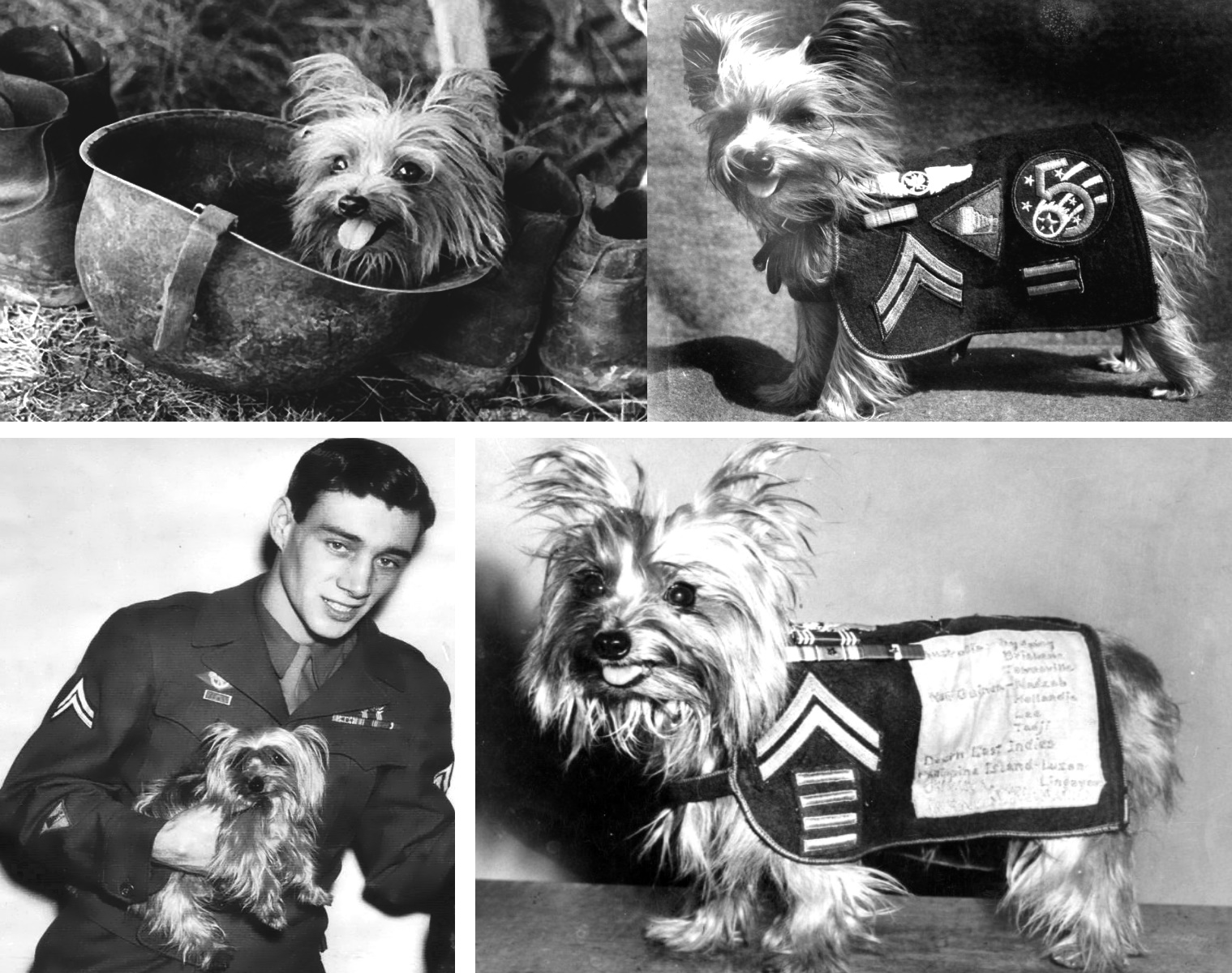 Little Smoky was stuck in a foxhole in New Guinea when she was rescued by Bill Wynne’s army regiment. With Bill by her side, Smoky went on to win an army mascot competition, grace the cover of the GI newspaper, Yank Magazine, become the first-ever Therapy Dog and literally save lives and planes during the war.
Smoky was a Yorkshire Terrier that troops found in a foxhole during World War II. She took part in a dozen missions and over 150 air raids. Her special skill was warning soldiers when there was incoming artillery. She once even pulled a telegraph wire through seventy feet of pipe to help her troops get communications up and running. These are just four examples of how canine soldiers have been essential to our military throughout the years. They perform search and rescue missions, act as security guards, sniff out bombs, locate weapons caches, scout out suspects, and serve as service and therapy dogs for our wounded veterans. They undergo hours of rigorous training to hone their skills in order to serve alongside our human military heroes 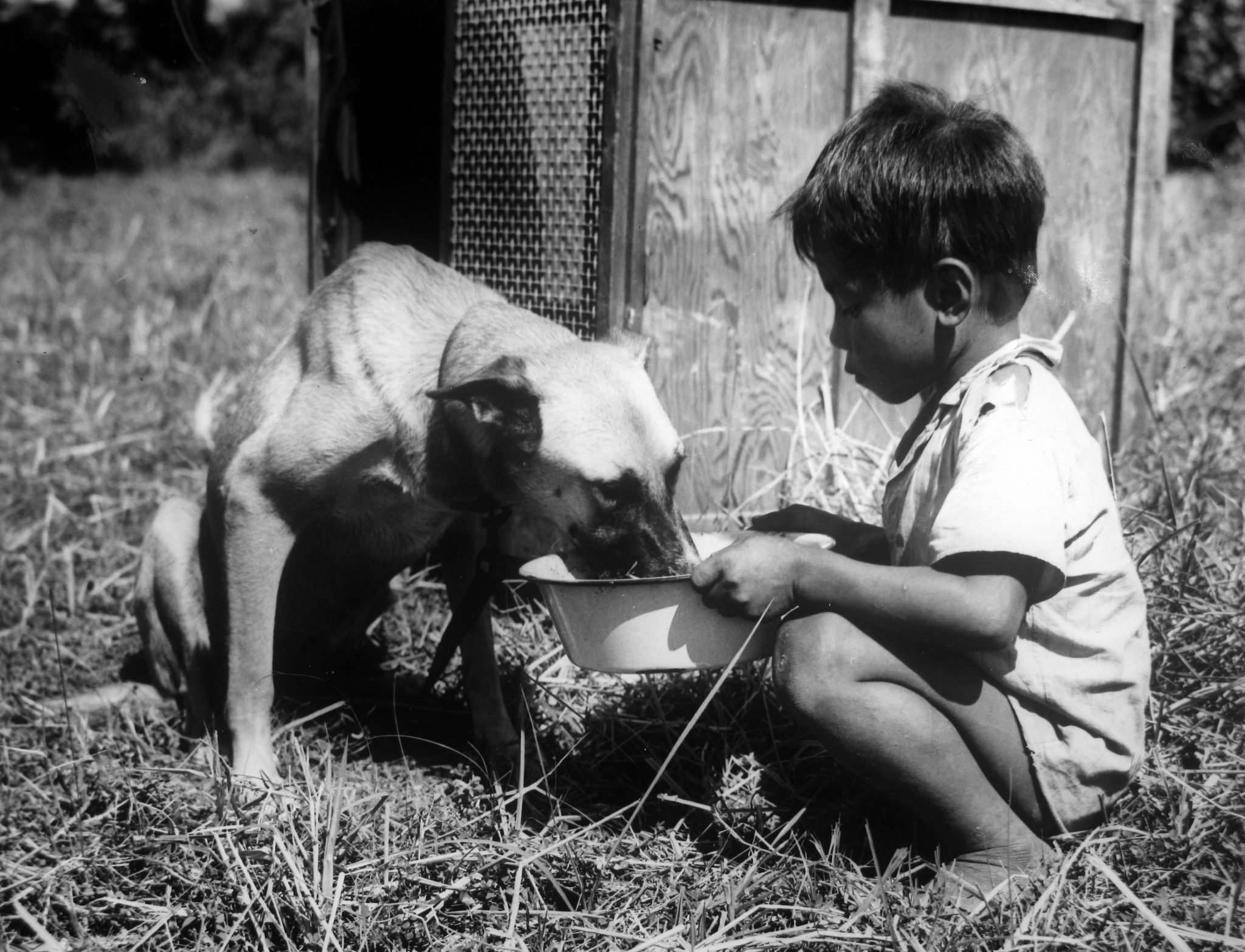 I have no caption for this picture, but do you think that words are really needed for this one? (Source) 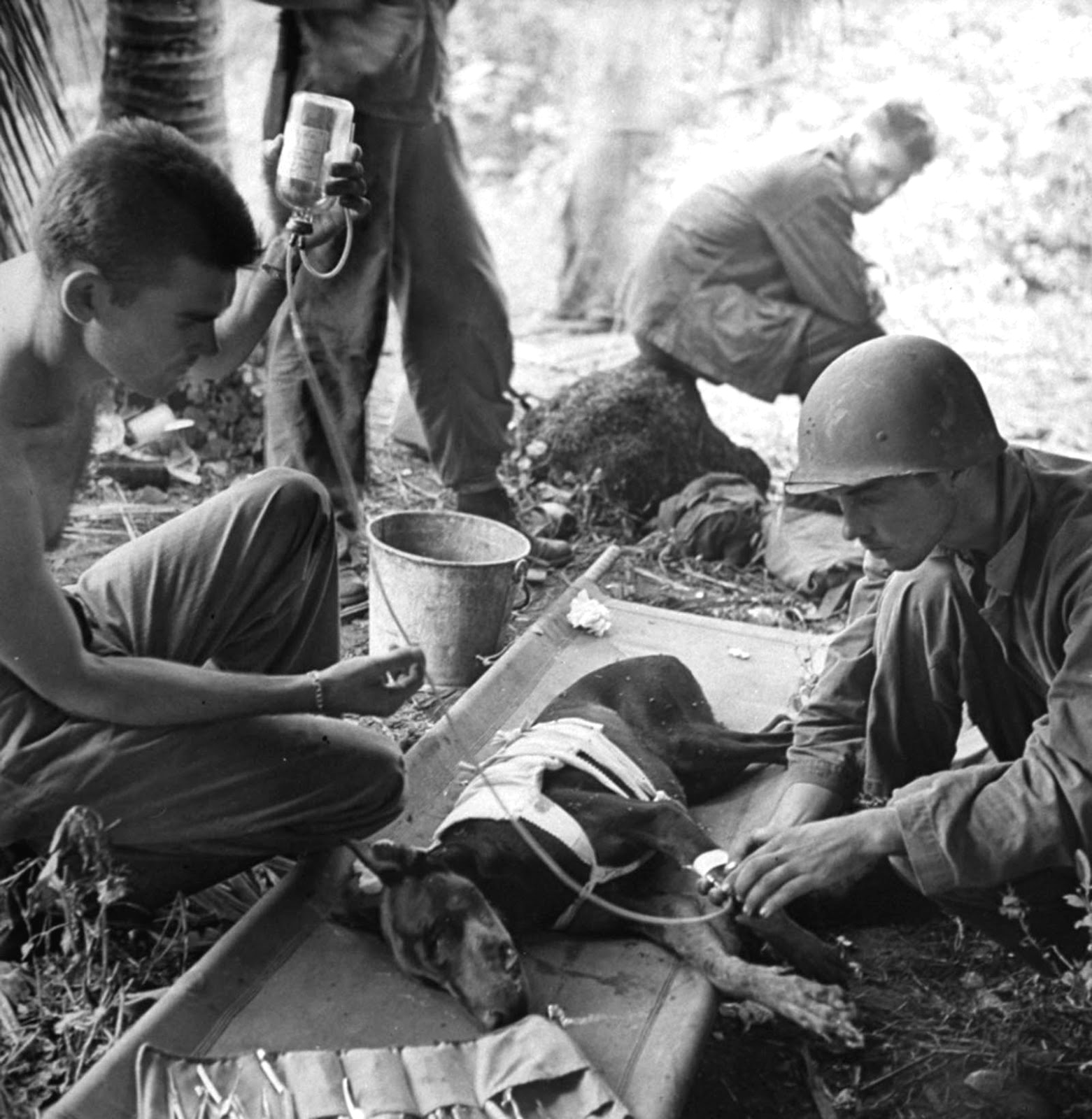 In the late summer of 1942, the US Marine Corps decided to experiment with the use of dogs in war, which may have been a new departure for the Corps, but not a new idea in warfare. Since ancient times, dogs have served fighting men in various ways. The Romans, for instance, used heavy mastiffs with armored collars to attack the legs of their enemies, thus forcing them to lower their shields. On Guam, 1/Lt William R. Putney commanded the 1st Dog Platoon and was the veterinarian for all war dogs on Guam. (Source) 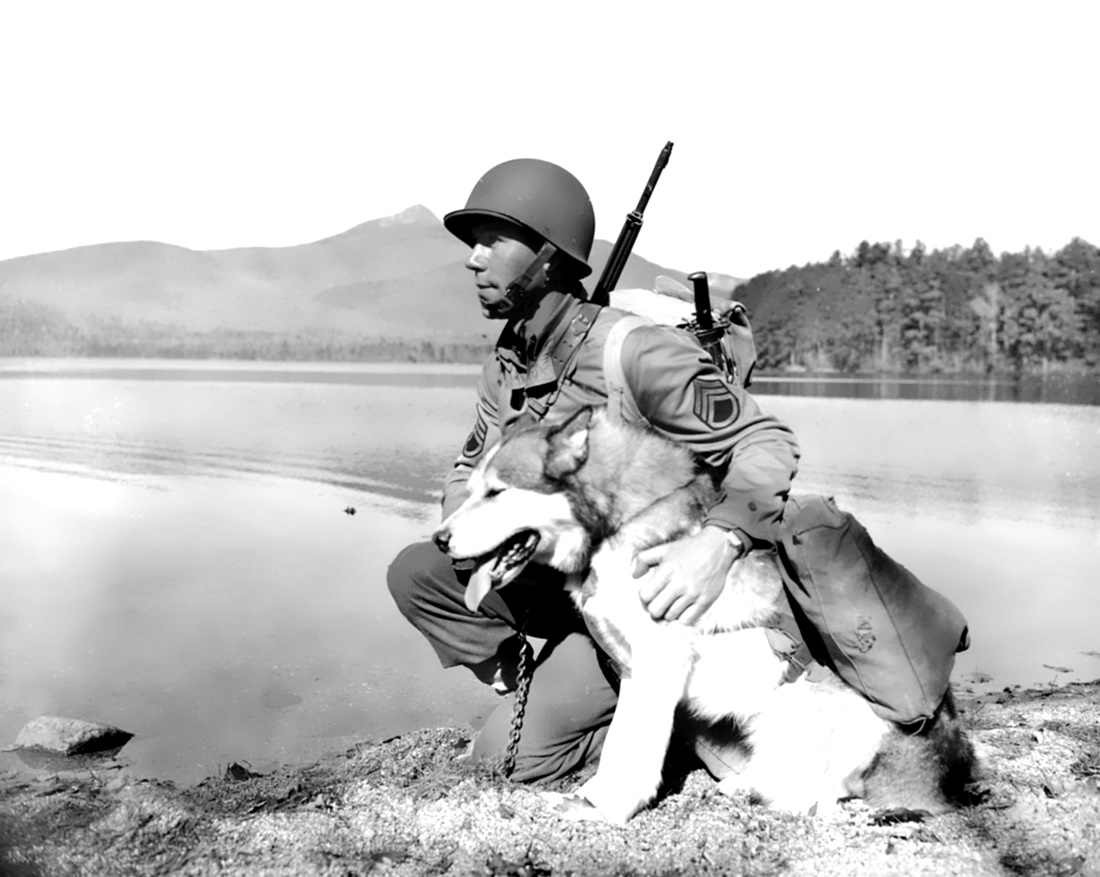 S/Sgt Stanley Novak stops with his dog for a short rest. It’s a Husky Dog. Could be in Alaska or Iceland, WW-2 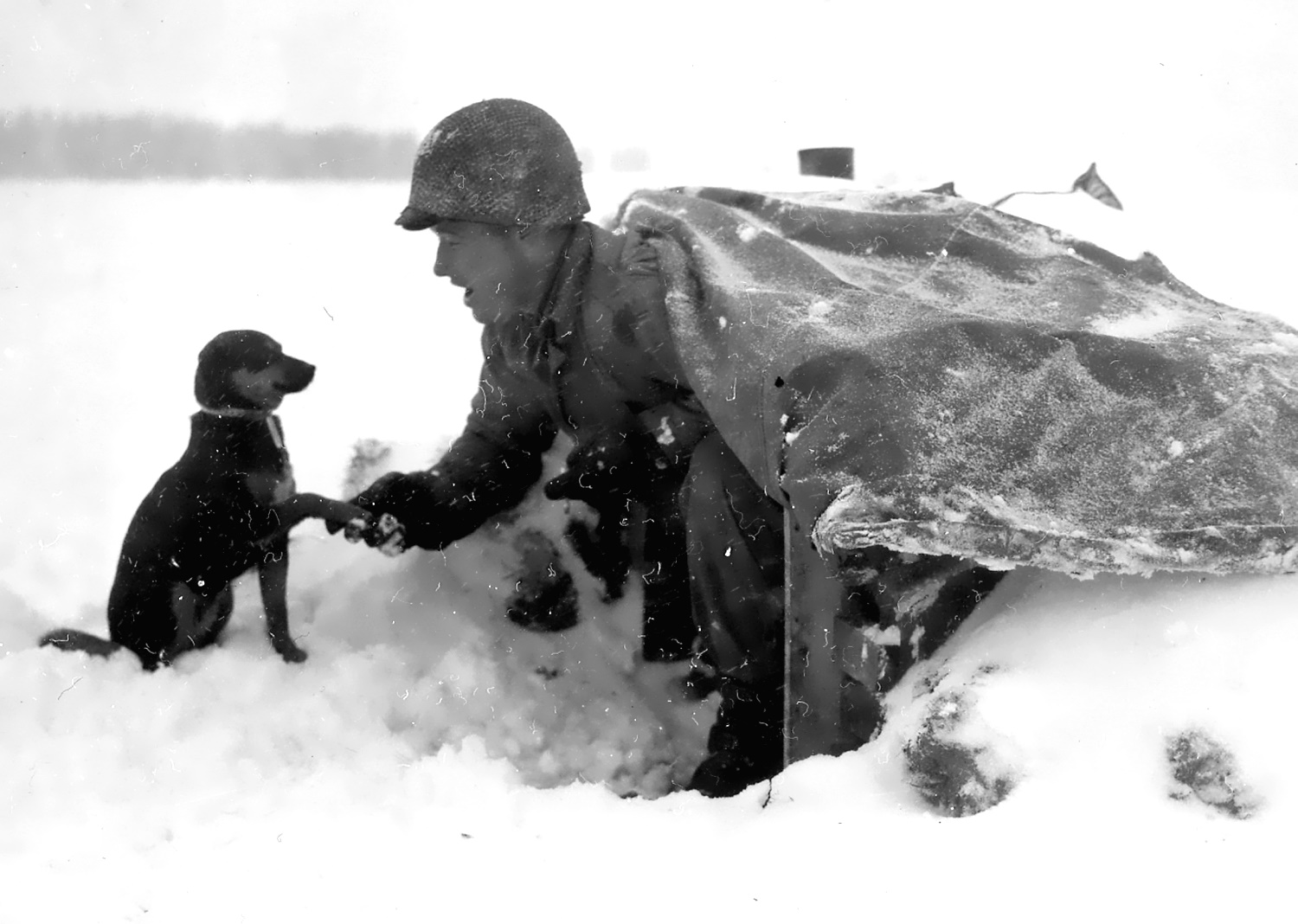 I don’t have a complete caption for this picture but I know it was shot during the Battle of the Bulge, in my home town, Francorchamps, Dec 1944 or Jan 1945. 30th Infantry Division 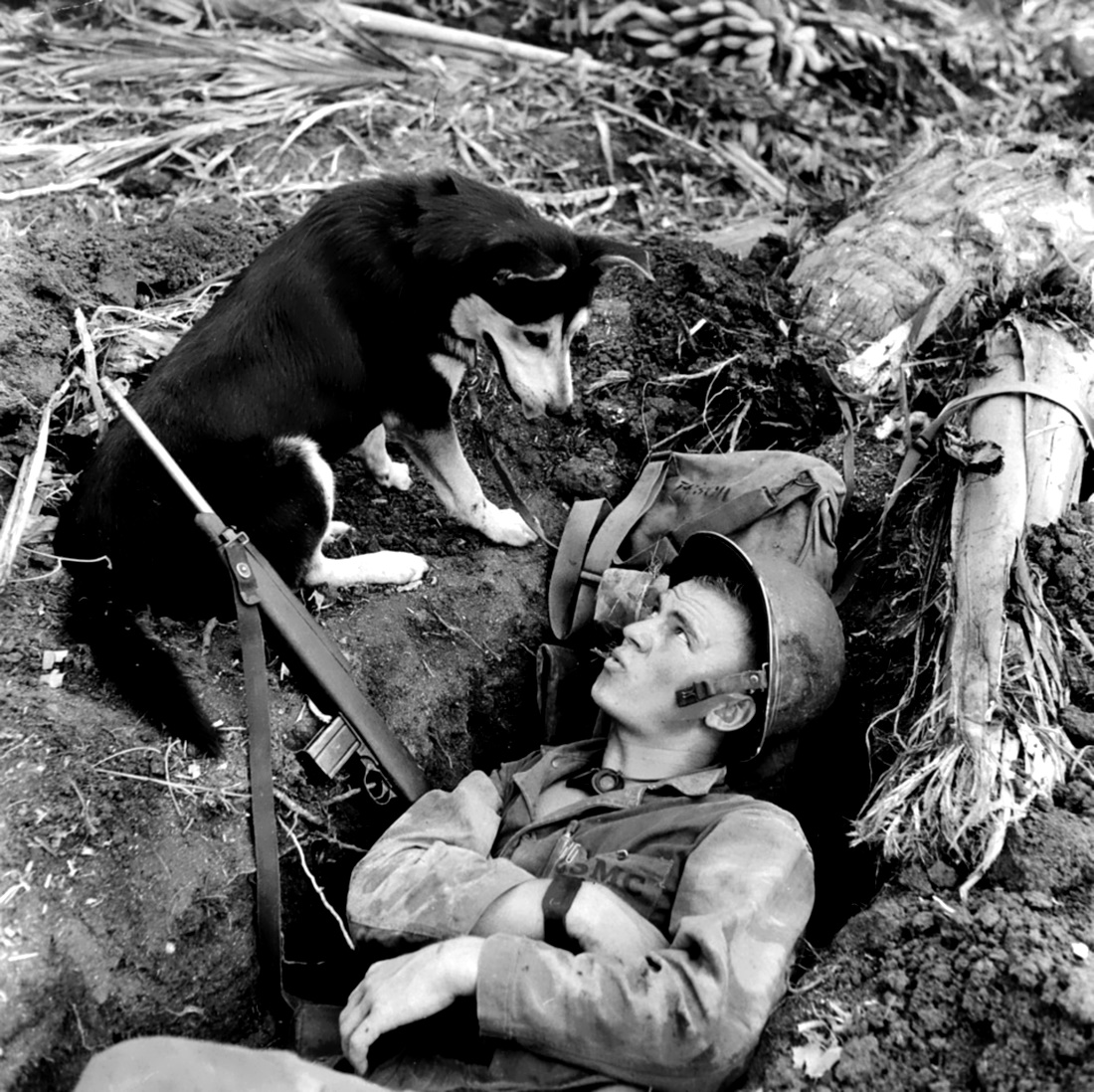 How about moving over, Bud? – A scouting dog and a US Marine who is comfortably occupying a foxhole in Guam, during World War II, 1944 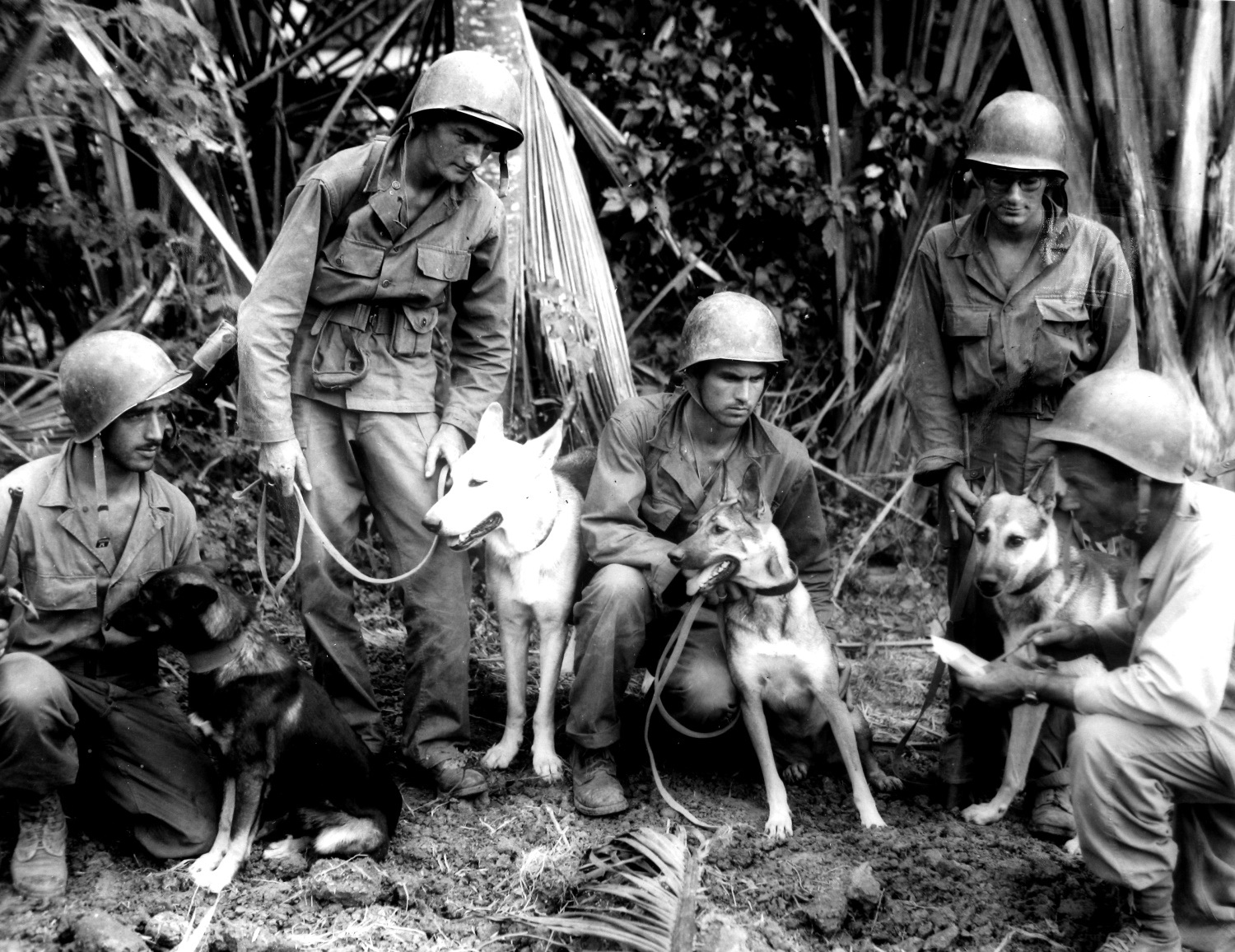 No caption, but Pacific Theater of Operation, USMC 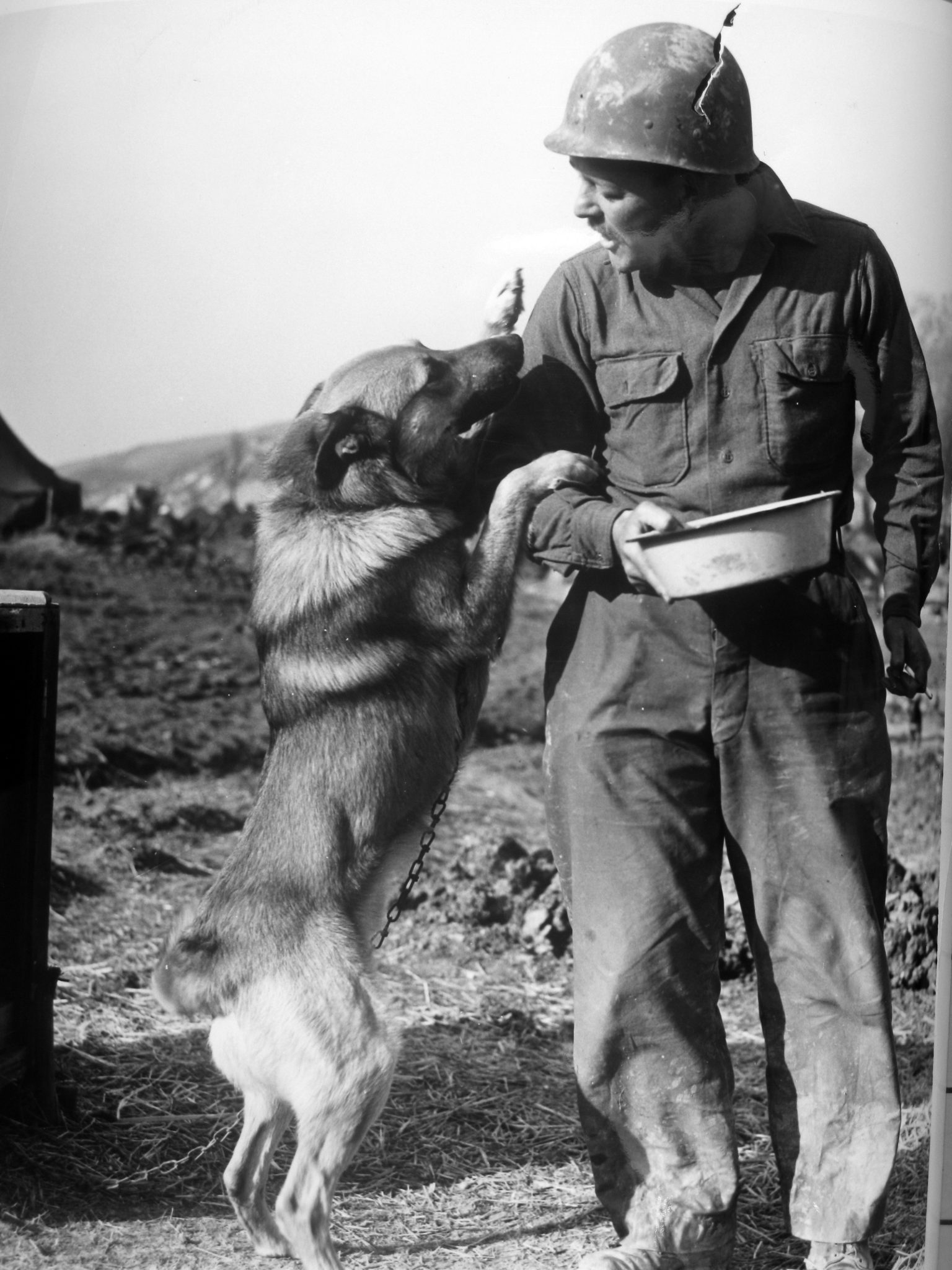