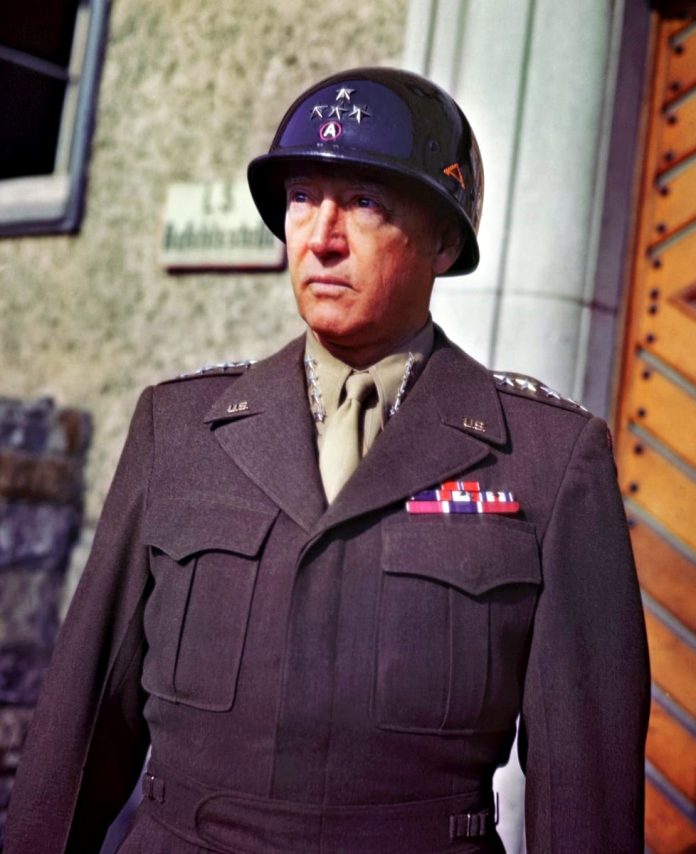 (Above and Below) Casablanca, the Main Objective on the Atlantic coast of Morocco. The landings were made at Fedala, farther north, in order to attack Casablanca overland partly because of its very strong defenses and partly because of the necessity of capturing the port in usable condition. Casablanca was a naval base. The US Navy had the mission of preventing French warships from interfering with the landings. American ships came under the fire of large coastal guns on El Hank Point (in the foreground, top picture) and engaged in running battles off Casablanca. Moored in the harbor was the battleship Jean Bart which also fired heavy shells to drive the American ships from their protective stations. After three days, when Casablanca was about to be attacked by ground, air, and sea bombardment and occupied by tanks and infantry, the city surrendered. The harbor was put to almost immediate use 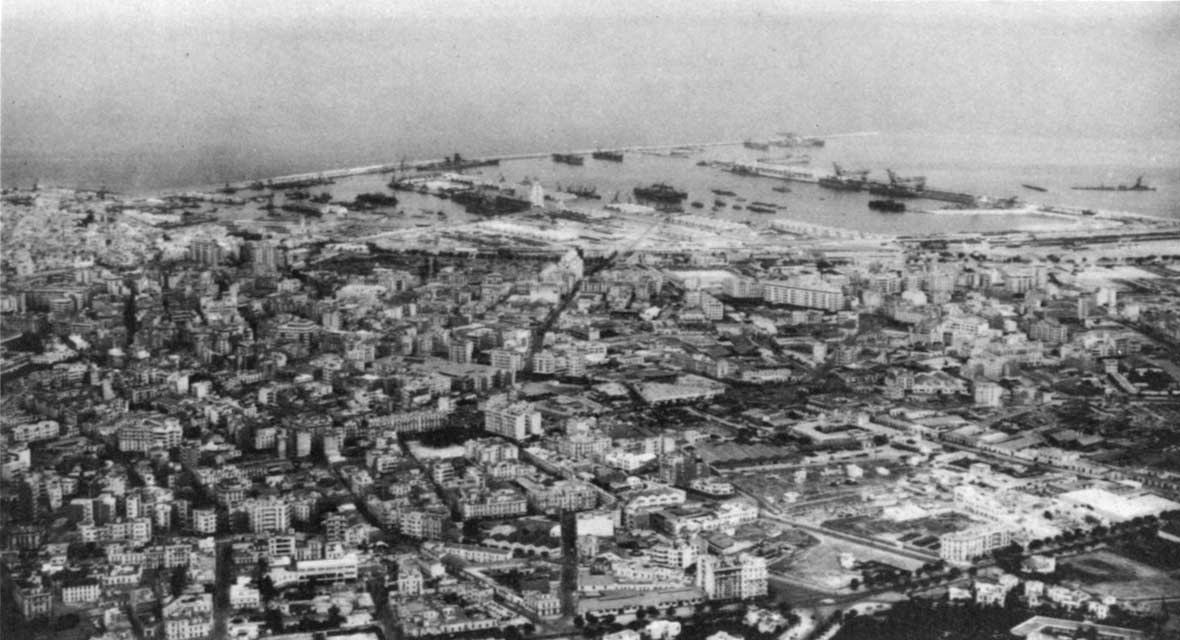 Port-Lyautey Airport on the Oued Sebou north of Casablanca. The Kasba, an old walled fort, is on high ground between the lagoon at upper left and the mouth of the river. Early on Nov 8, 1942, one landing was made on the north and two south of the river mouth. Those between the lagoon and the river were opposed by coastal defense guns and artillery from the Kasba. Hostile aircraft strafed all beaches and fighting lasted more than two days. Early on the 10th a naval party cut the cable across the river mouth and a US destroyer steamed up the river under fire from the Kasba. Raiders and infantry occupied the airport at 0800 and Army fighter planes from a carrier landed by noon shortly after the Kasba surrendered 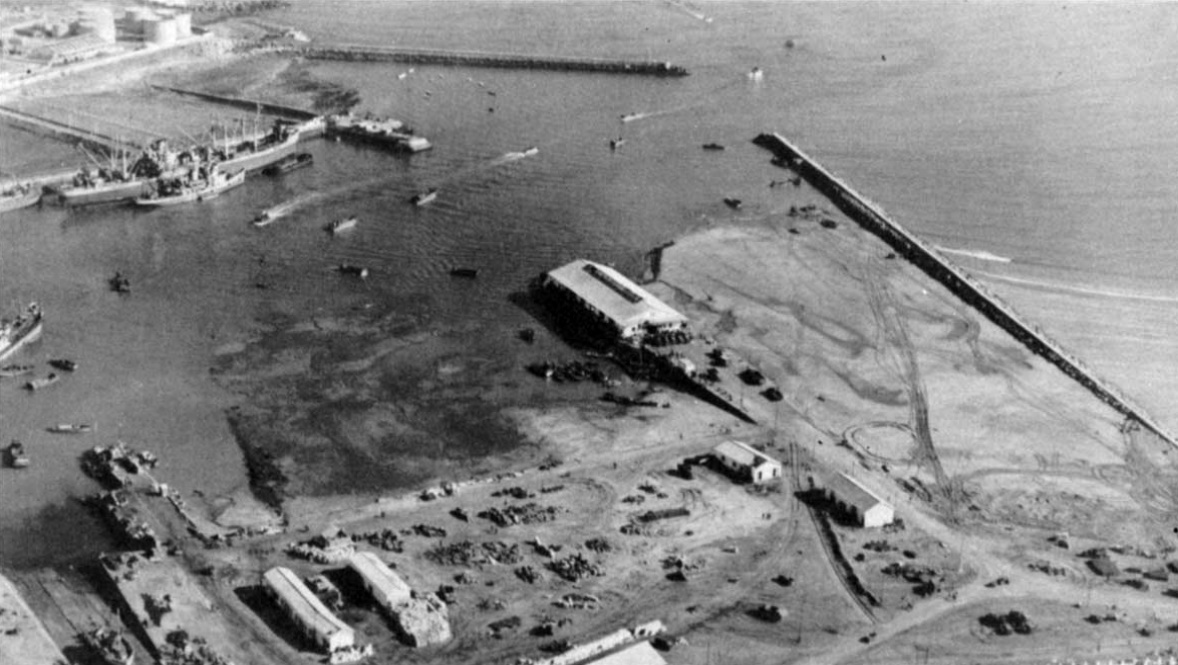 (Above and Below) Two of the Atlantic Ports Selected for the Invasion. The main landings on the Atlantic coast took place in the vicinity of Fedala (above). In the early afternoon on the day of invasion, Fedala surrendered and the port was put to immediate use. Two destroyer-transports entered the port of Safi (below), 130 miles south of Casablanca, at 0435 on Nov 8. Their troops secured the harbor and key points inland while the first landings at the beaches were in progress Shore batteries firing on the destroyers were silenced within a few minutes. By late afternoon the opposition in and around Safi came to an end. The reason for invading Safi was to obtain port facilities for unloading medium tanks 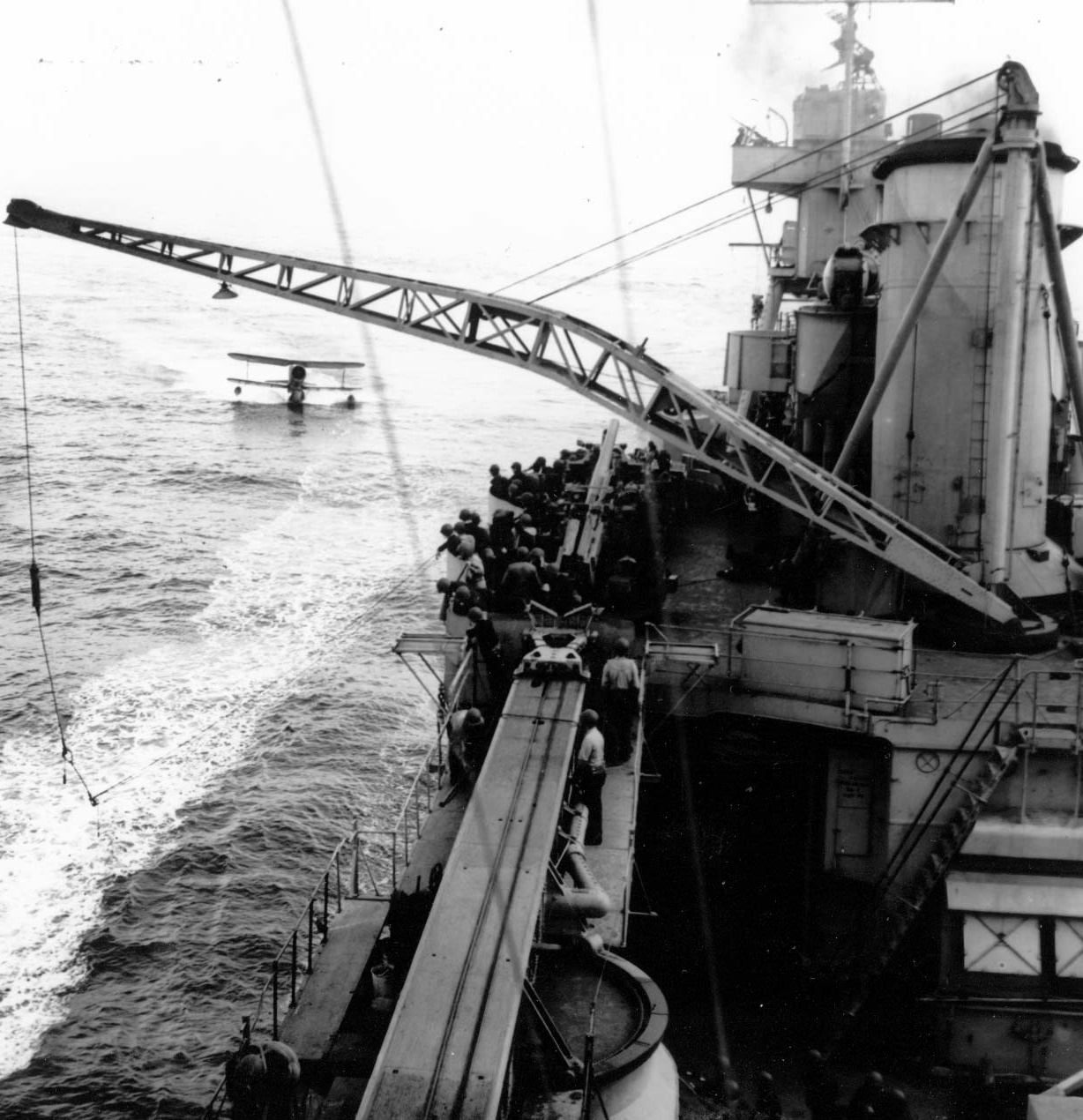 Curtiss Seagull Scout Plane returning from observing and directing naval gunfire on Casablanca. Soon after the action started the radar on the large naval units was put out of commission by the concussion of the high-caliber guns. Spotting planes took over the task of directing fire and did an excellent job in spite of the difficulties caused by smoke over the port area. Battleships and cruisers had their own observation planes, launched by catapults and picked up by cranes. These planes assisted the infantry during the heavy fighting around Port-Lyautey by dropping antisubmarine depth charges on tanks and columns of vehicles. (Scout Observation-Curtiss SOC) 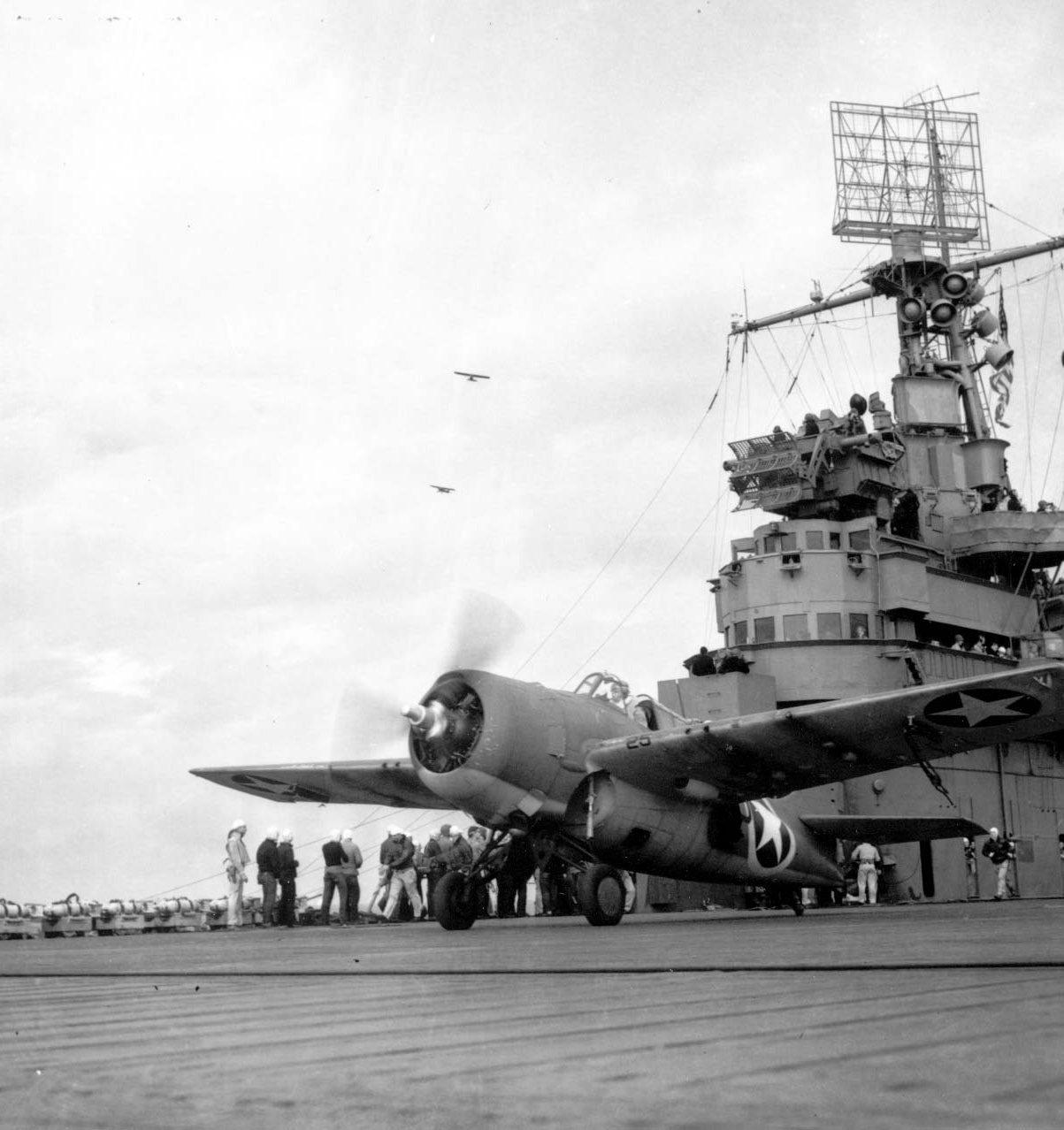 Navy Dive Bomber on Deck of a Carrier. In the distance are two Army cubs, artillery observation planes. Three of these were brought across on a carrier for Army use and launched from the carrier to land on the race track at Fedala. Army-Navy teamwork was excellent during the invasion. Navy planes, on Army request, broke up enemy formations, bombed and strafed road blocks and strong points, often within an hour after the call had gone out from the forces ashore. Also on Army call, naval guns shelled points along the coast and some distance inland. (Grumman F-4F Wildcat) 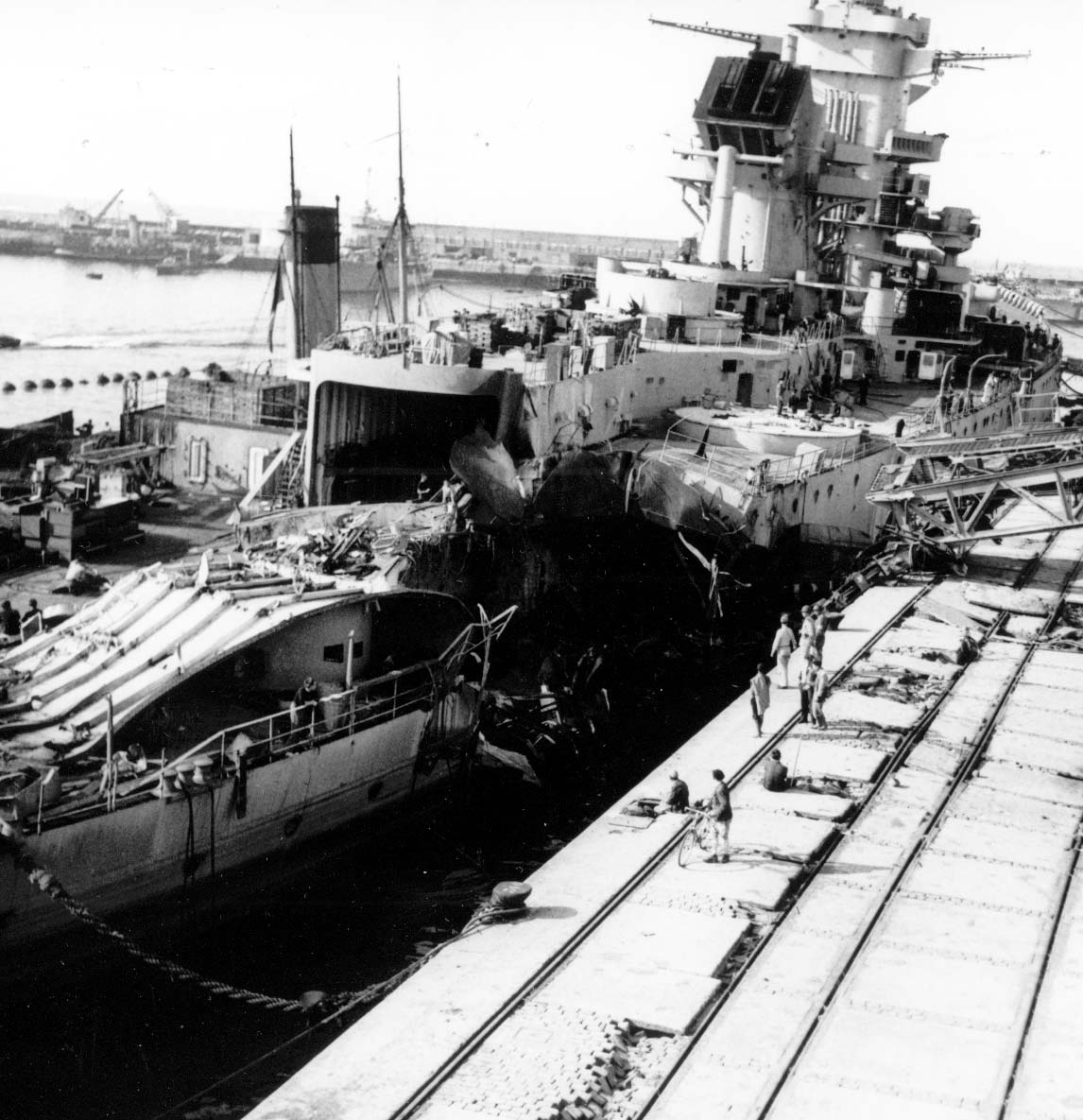 The Jean Bart, Latest Battleship of the French Navy. Although it was not finished at the time of the invasion and only one turret of four 15-inch guns had been installed, it opened fire on US naval units at 0703 on D Day. The fire was returned and her battery was silenced within 15 minutes; five hits were made with 16-inch guns and the turret mechanism of the Jean Bart was jammed. Her guns were again operative at the end of D Day but did not fire until the 10th after which a 10-plane formation of dive bombers scored three hits, with 1000-pounders. Her guns were still able to fire. Plans to bomb and shell the ship on the 11th were abandoned because of the armistice 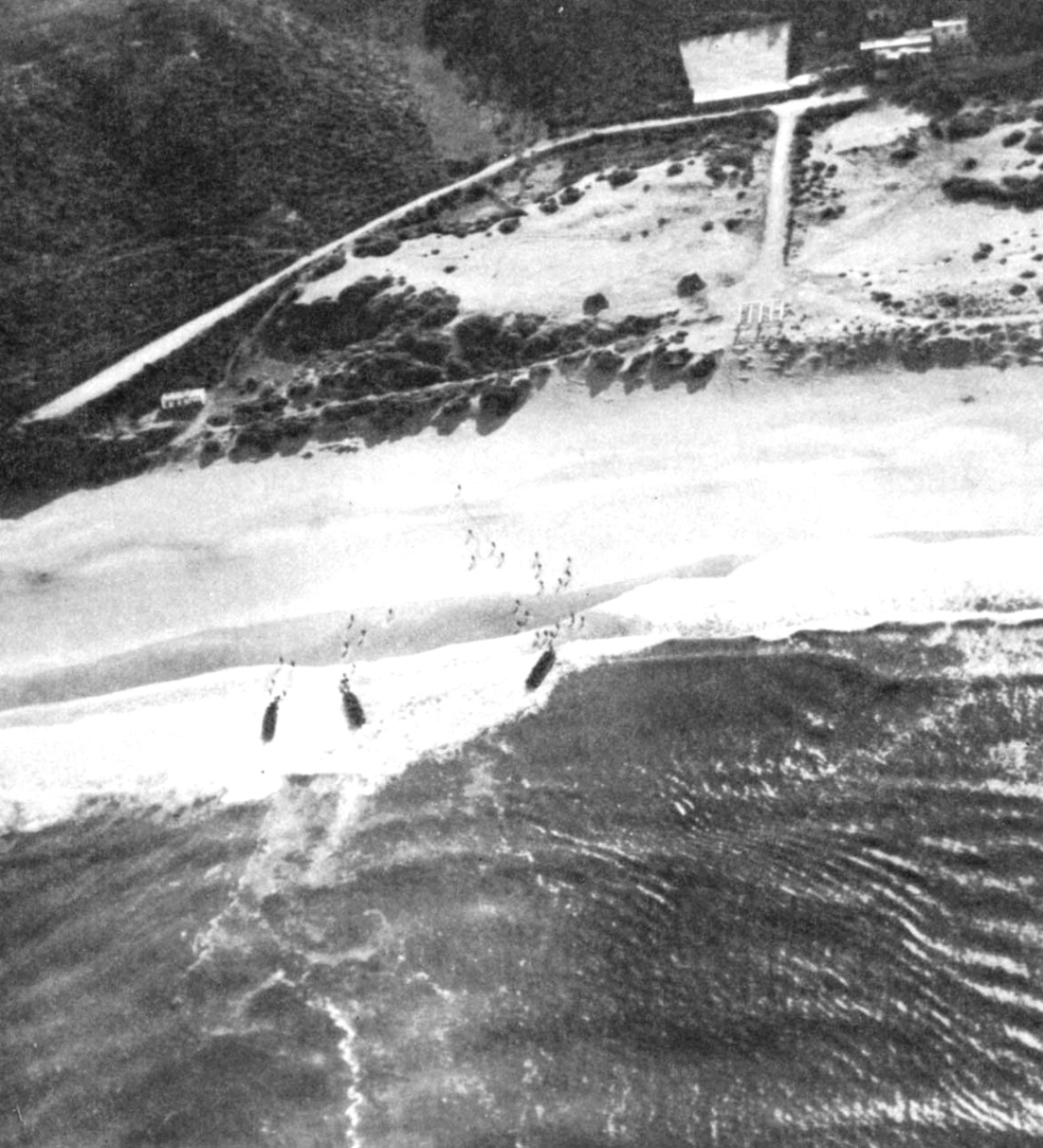 Aerial View of Infantry Landing from Assault Boats north of Casablanca. Note heavy surf. Many of the landing craft were damaged on the beaches for lack of facilities to remove craft from the surf line and to repair or salvage them when stranded. At Fedala, for instance, more than half of the boats were unusable after the first landings. This slowed the follow-up unloading and was a contributory cause of the torpedoing of the transports waiting offshore to be discharged. 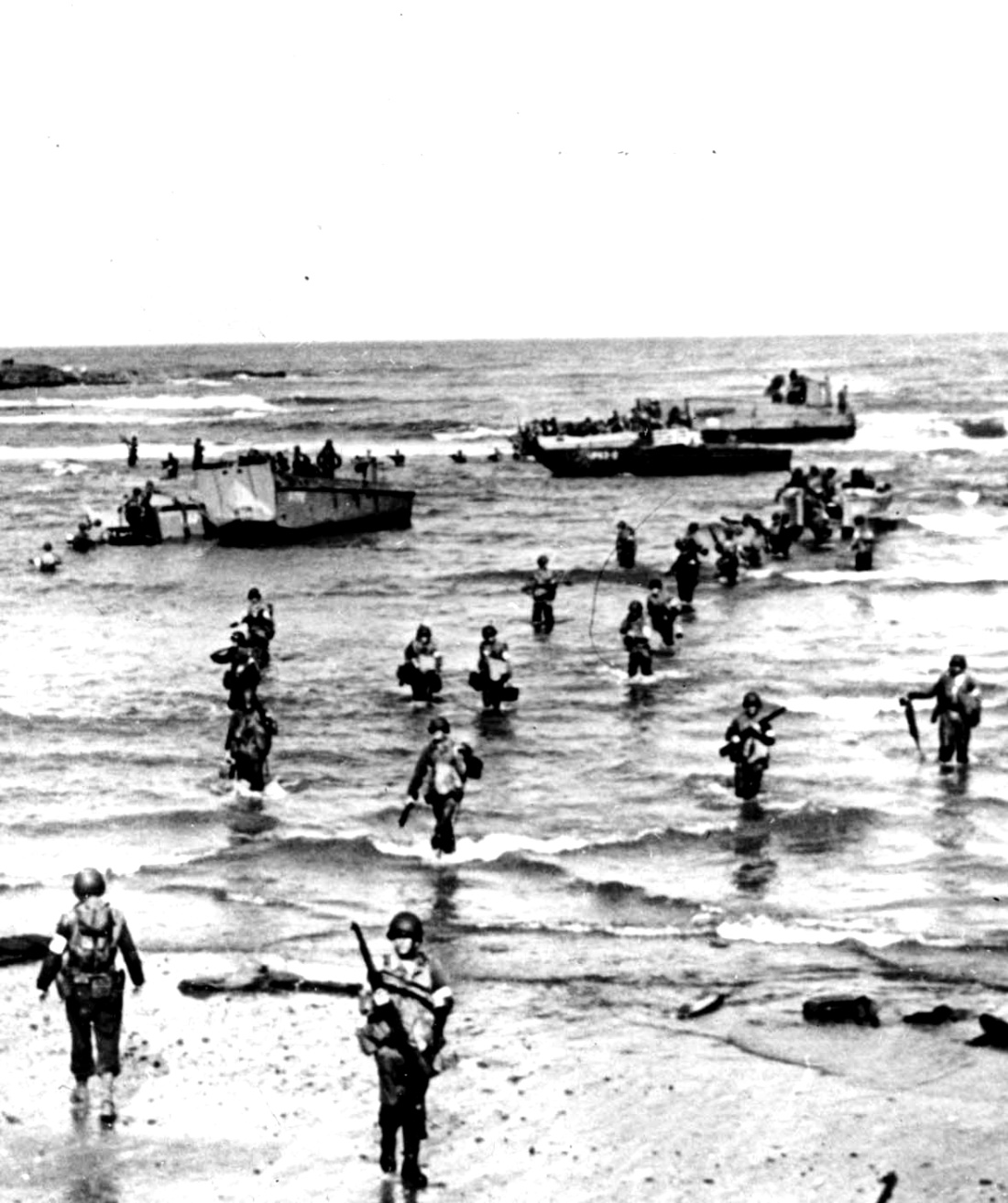 Infantry Landing on the Beach near Fedala. The landing itself was unopposed, but fighting developed just off the beach. (Left, Landing Craft Vehicle, LCV) 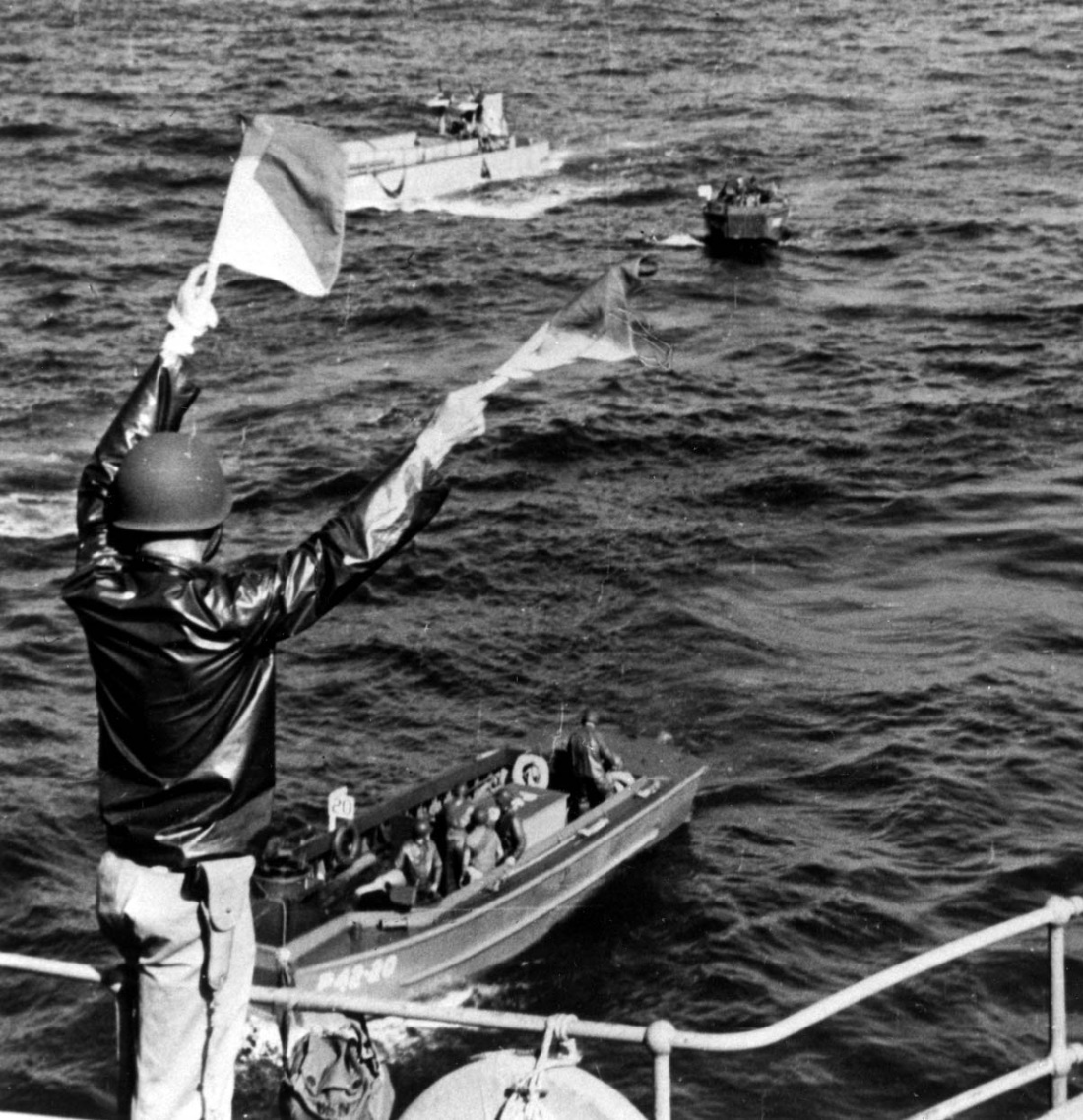 Directing Landing-Craft Traffic off Fedala by means of semaphore flags. The port was captured and put into operation on D Day, but because of its limited capacity, freighters had to stand offshore awaiting their turns to discharge cargo. In the meantime unloading of ships went on with remaining assault craft. On the evening of Nov 11, a transport was torpedoed and sunk by submarine; a destroyer and tanker were damaged. The next day three additional transports were torpedoed and sunk. (Landing craft in picture: top center, LCV; middle left, Landing Craft Mechanized, LCM(3); middle right and bottom, Landing Craft Personnel (Ramp), LCP-R)) 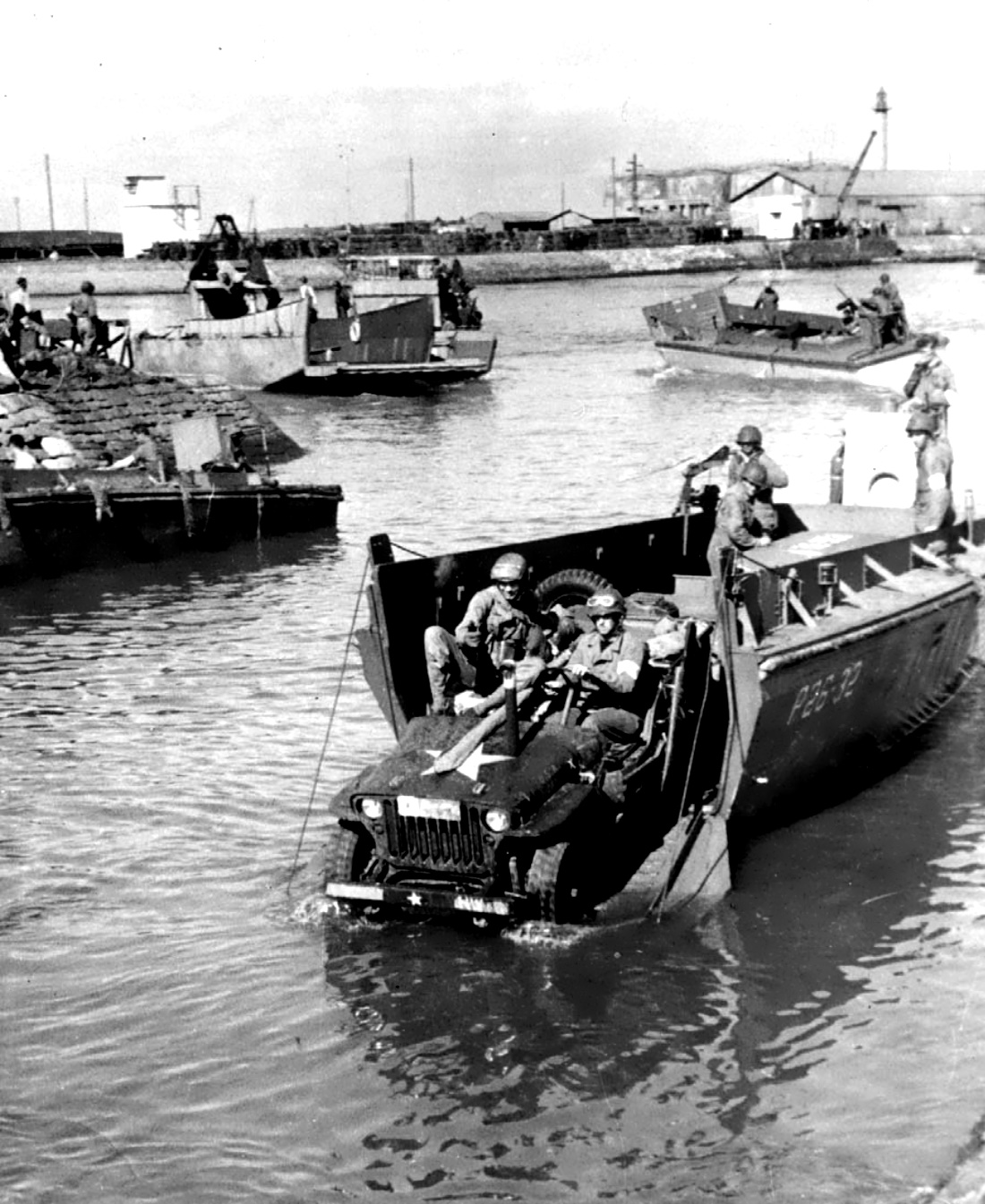 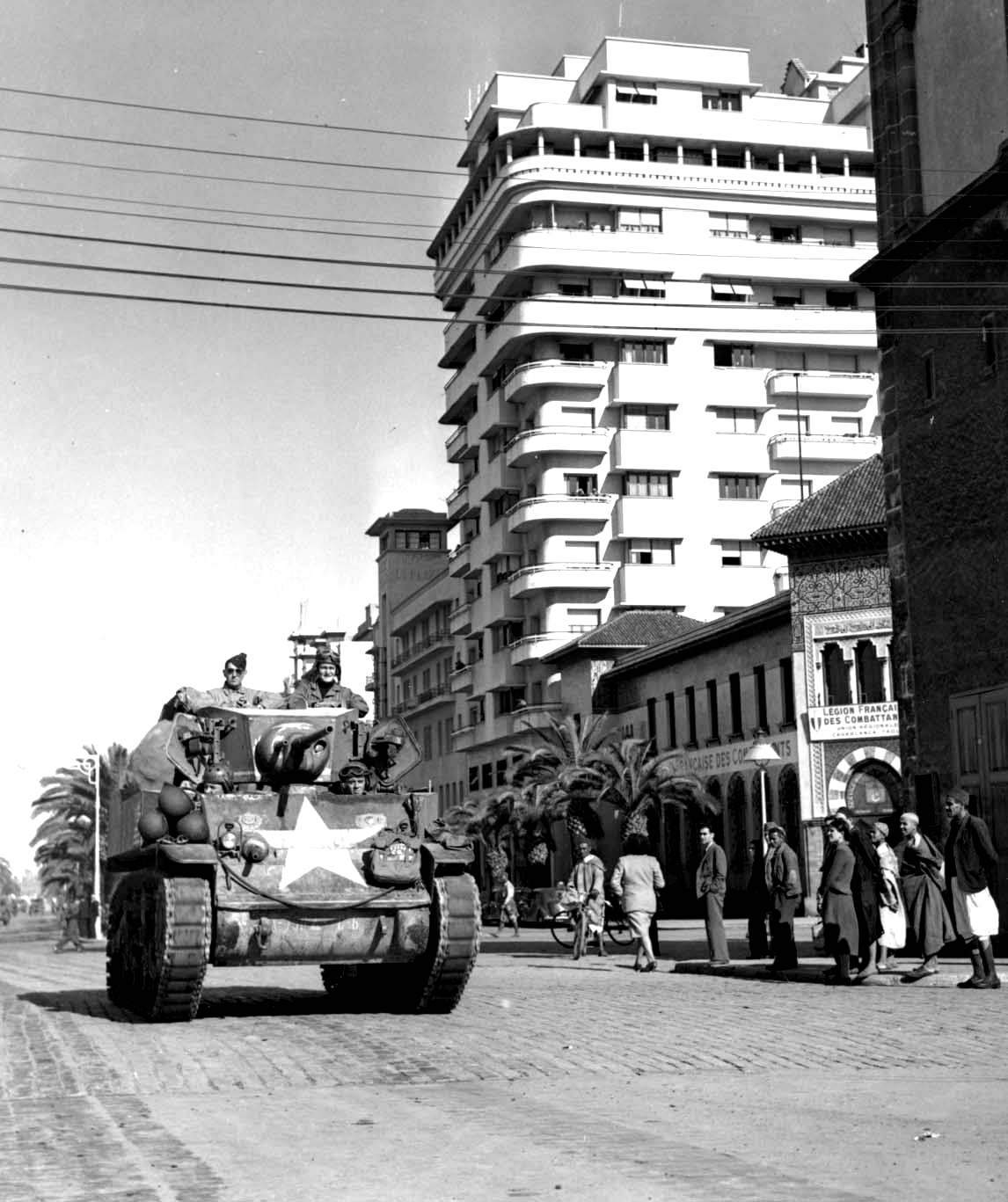 Light Tank in Casablanca shortly after the surrender on Nov 11. Only light tanks were brought ashore in assault craft; the medium tanks were unloaded in the port of Safi until D plus 2 and headed north toward Casablanca. 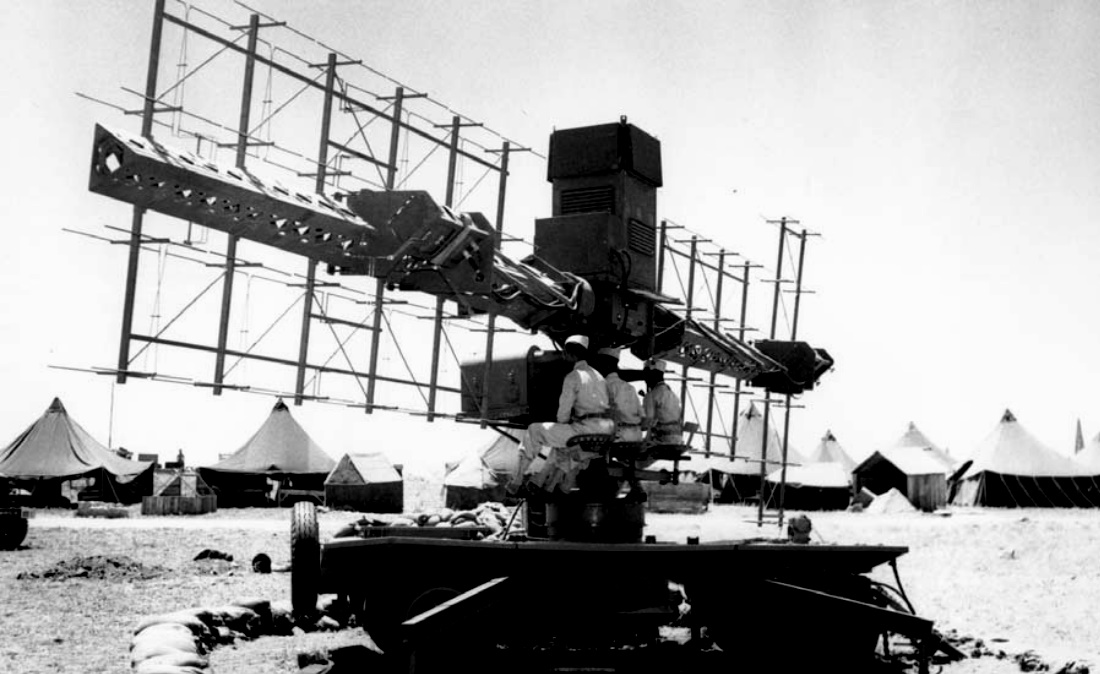 (Above and Below) Radar Sets near Casablanca. This type of set was part of the equipment of the invading forces. By the end of Dec 1942, fifteen of these units were in operation as part of the air warning system of Casablanca. The searchlight automatically followed planes tracked by the radar. The city was almost at the maximum range of enemy bombers and was the target for few raids. (Radar Set SCR-268) 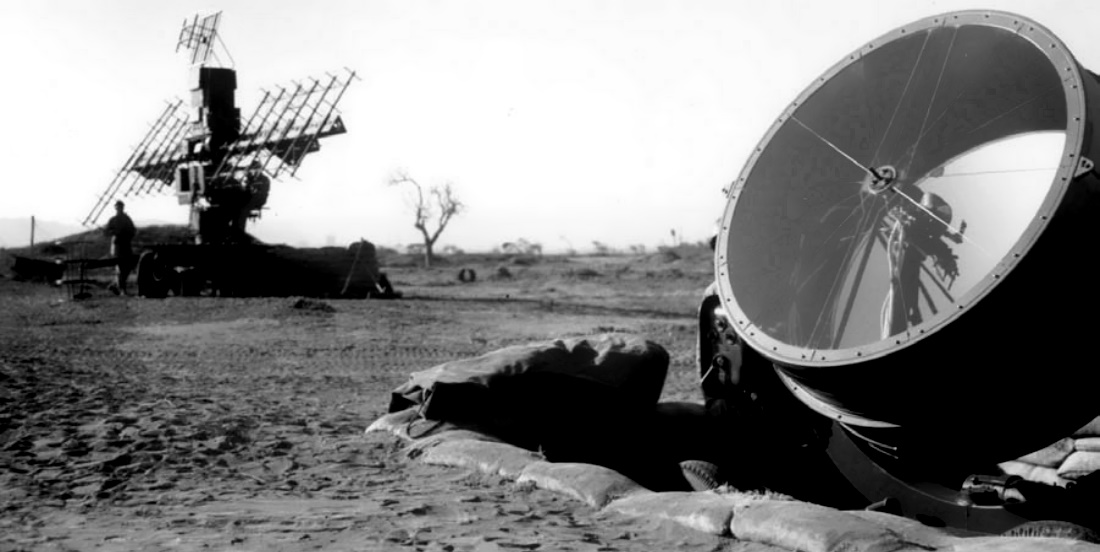 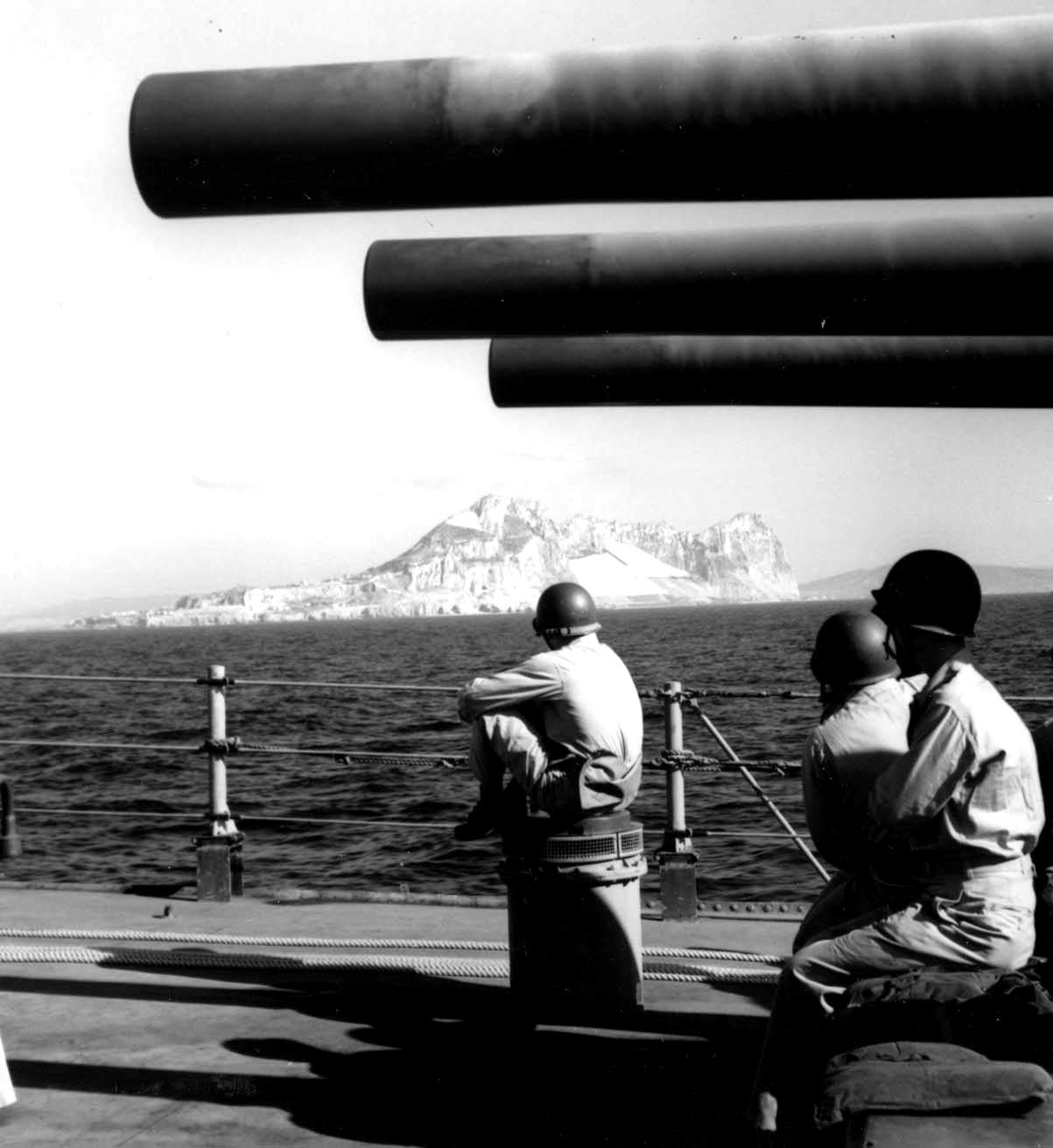 Warship Passing the Rock of Gibraltar. This fortress was temporarily the Allied command post for Operation Torch. It was the only area on the European mainland under Allied control. Land-based aircraft did not take part in the beach assault phase, but aircraft were staged at the Gibraltar airport for take-off for Africa as soon as airfields there were captured. A US fighter group equipped with British Spitfires landed near Oran about noon on D Day and aided in the fighting there; other planes flew to Algiers.