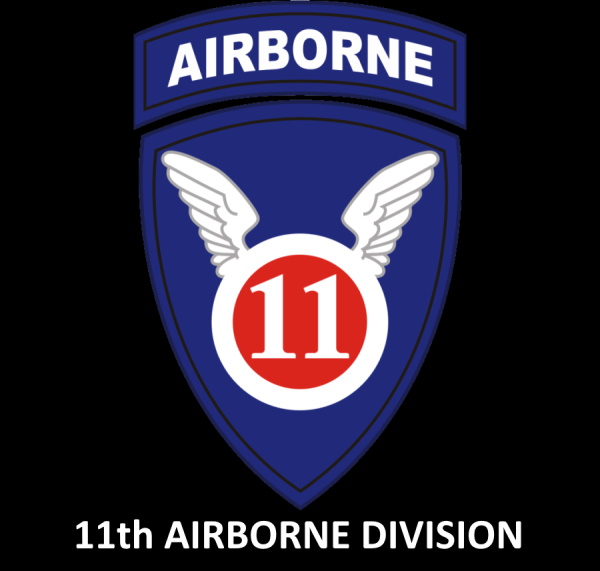 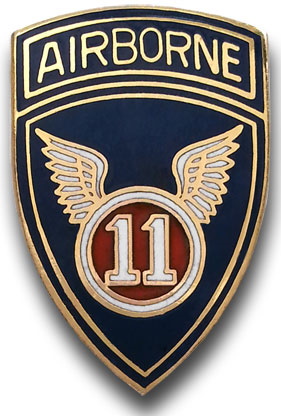 The Division played a vital role in the successful Knollwood Maneuver, organized to determine the viability of large-scale American airborne formations after their utility had been called into question following a disappointing performance during the Allied invasion of Sicily. So, on Nov 15, 1943, the 11th Airborne Division received its mission from the Headquarters, Airborne Command at Camp Mackall. The Division, reinforced by the 501st Parachute Infantry Regiment was to assault on D-Day, Dec 7, 1943, capture Aberdeen, North Carolina, and the Knollwood Airport (now the Moore County Regional Airport), establish an airhead around the Airport and prevent reinforcement of the Red Army at Raeford, North-Carolina (17th Airborne Division and the 541st Parachute Infantry Regiment) from the north and northwest. Defending Knollwood and selected critical points was a Regimental Combat Team (minus). An Infantry Battalion, an AT Co, a Field Artillery Battery, and a Medical Detachment from the 17-A/B were combined with a battalion from Col Ducat M. McEntee’s independent 541-PIR. These elements were training at Camp Mackall.

The Knollwood Maneuver convinced Gen George C. Marshall (CoS US Army) and Gen Lesley J. McNair (Army Ground Forces) to retain the Airborne Divisions. The successful execution of all missions by the 11-A/B validated the concepts in Training Circular #113 concerning employment and support of airborne forces. As a result, significant portions of TC-113 were included verbatim in WD FM 71-30, Employment of Airborne Forces, dated Jul 3, 1947, and WD FM 1-30, Tactical Doctrine of Troop Carrier Aviation, dated Aug 12, 1947. FM 1-30 became the Bible for troop carrier operations in support of airborne forces. The Knollwood Maneuver had saved the 11th, 13th, 17th, 82nd, and 101st Airborne Divisions. Camp Mackall and Laurinburg-Maxton Army Air Base would continue to be training centers for airborne forces throughout World War II. 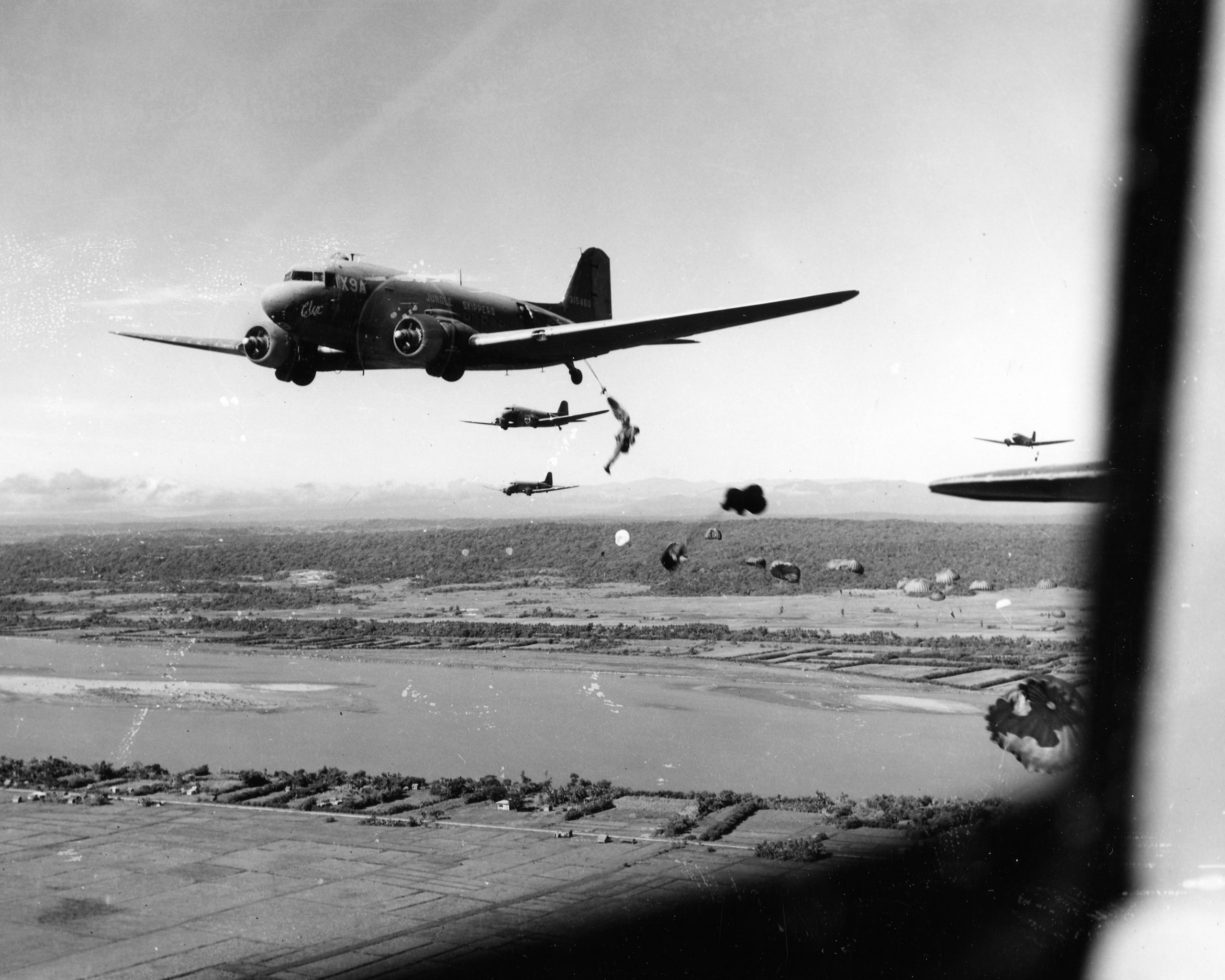 Held in reserve in the United States for the first half of 1944, the 11-A/B was transferred in June, to the Pacific Theater of Operations. Upon arrival, it entered a period of intense training and acclimatization, and by November was judged combat-ready. The 11-A/B saw its first action on the island of Leyte in the Philippines but in a traditional infantry role. In January 1945, the division took part in the invasion of Luzon. The two glider infantry regiments again operated as conventional infantry, securing a beachhead before fighting their way inland. The parachute infantry regiment was held in reserve for several days before conducting the division’s first airborne operation, a combat drop on the Tagaytay Ridge. Reunited, the division participated in the Liberation of Manila, and two companies of divisional paratroopers conducted an audacious raid on the Los Banos internment camp, liberating two thousand civilians. The 11-A/B last combat operation of World War II was in the north of Luzon around Aparri, in aid of combined American and Philippine forces who were battling to subdue the remaining Japanese resistance on the island. 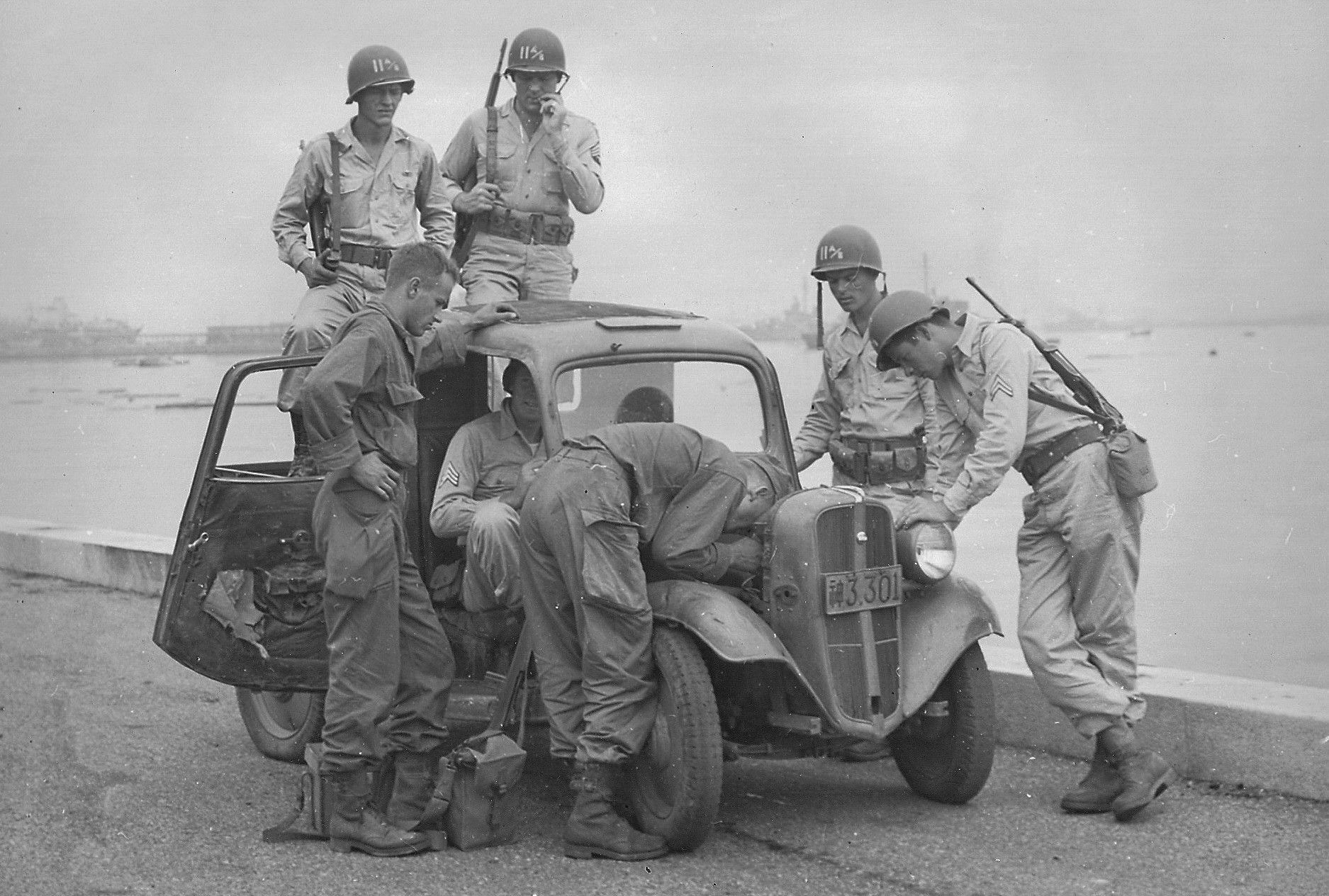 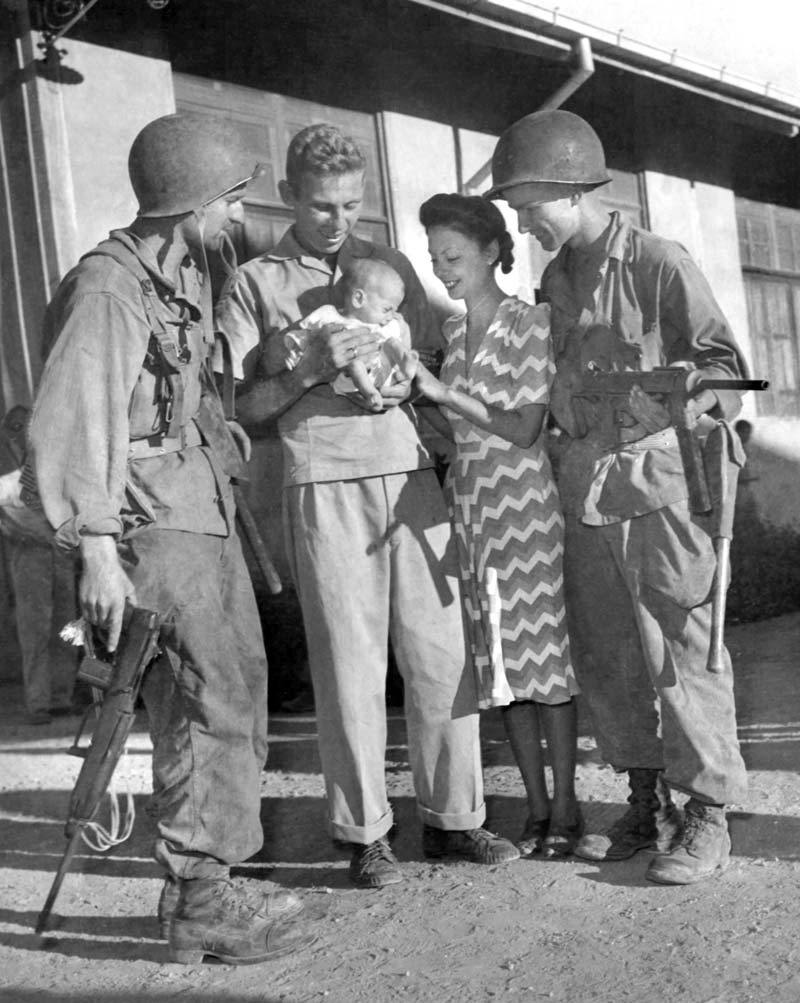 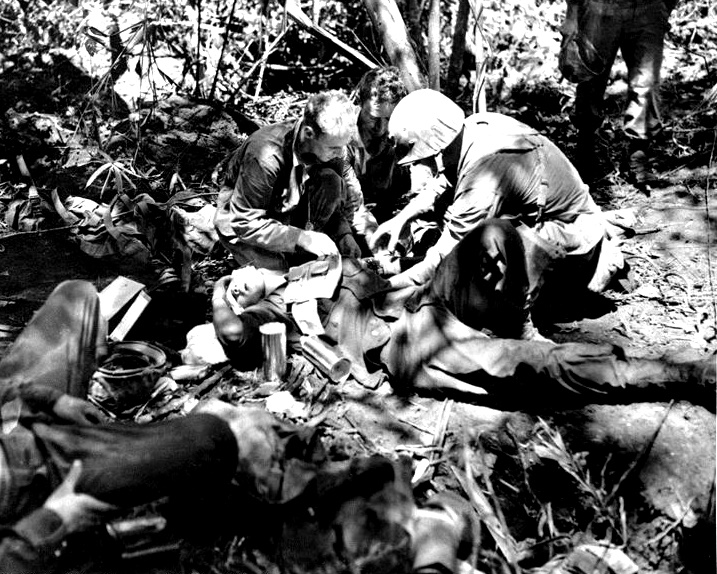 Leyte In Jan 1944, the 11-Abn was moved by train from Camp Mackall to Camp Polk in Louisiana. After four weeks of final preparation for its combat role, in April the division was moved to Camp Stoneman, California, and then transferred to Milne Bay, Papua New Guinea, between May 25, and June 11. From June to September the division underwent acclimatization and continued its airborne training, conducting parachute drops in the New Guinea jungle and around the airfield in Dobodura. During this period, most of the glider troops became parachute-qualified making the division almost fully Airborne. On Nov 11, the division boarded a convoy of naval transports and was escorted to Leyte in the Philippines, arriving on Nov 18. Four days later it was attached to the XXIV Corps and committed to combat, but operating as an infantry division rather than in an airborne capacity. The 11-Abn was ordered to relieve the 7th Infantry Division stationed in the Burauen, La Paz, and Bugho area, engage and destroy all Japanese forces in its operational area, and protect the XXIV Corps rear-area supply dumps and airfields. 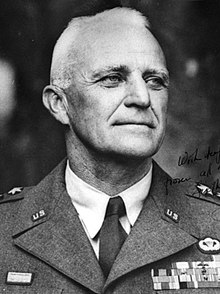 Gen Joseph M. Swing ordered the 187th Glider Infantry Regiment to guard the rear installations of XXIV Corps, while the 188th Glider Infantry Regiment was to secure the division’s rear and conduct aggressive patrols to eliminate any enemy troops in the area. The 511th Parachute Infantry Regiment was assigned the task of destroying all Japanese formations in the division’s operational area, which began on Nov 28, when it relieved the 7-ID. The 511-PIR advanced overland with two battalions abreast and the third in reserve, but progress proved slow in the face of fierce Japanese resistance, a lack of mapped trails, and heavy rainfall (with more than twenty-three inches (60 CM) falling in November alone). 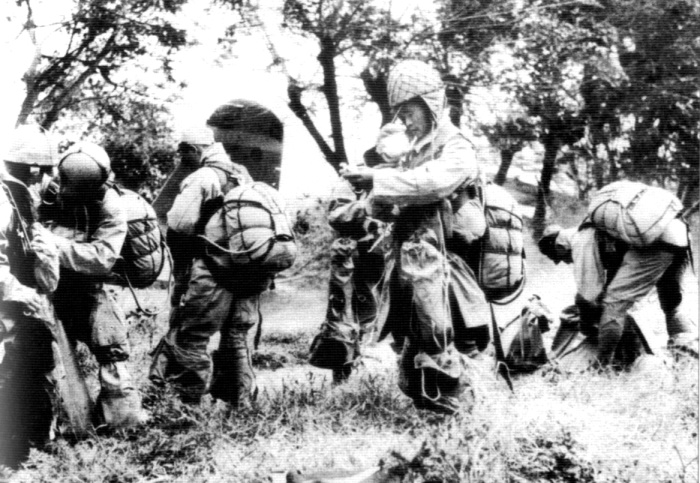 As the advance continued resupply became progressively more difficult; the division resorted to using large numbers of Piper Cub aircraft to drop food and ammunition. Several attempts were made to improve the rate of advance, such as dropping platoons of the 187-GIR from Piper Cubs in front of the 511-PIR to recon and using C-47 transport aircraft to drop artillery pieces to the regiment’s location when other forms of transport, such as mule-trains, failed.

On Dec 6, the Japanese tried to disrupt operations on Leyte by conducting two small-scale airborne raids. The first attempted to deploy a small number of Japanese airborne troops to occupy several key American-held airfields at Tacloban and Dulag, but failed when the three aircraft used were either shot down, crash-landed, or destroyed on the ground along with their passengers. The second larger raid was carried out using about 30 transport aircraft supported by fighters. Despite heavy losses, the Japanese managed to drop several paratroopers around the Burauen airfield, where the headquarters of 11-Abn were located. Five L-5 Sentinel recon aircraft and one C-47 transport were destroyed, but the raiders were eliminated by an ad hoc combat group of artillerymen, engineers, and support troops led by Gen Joseph M. Swing. 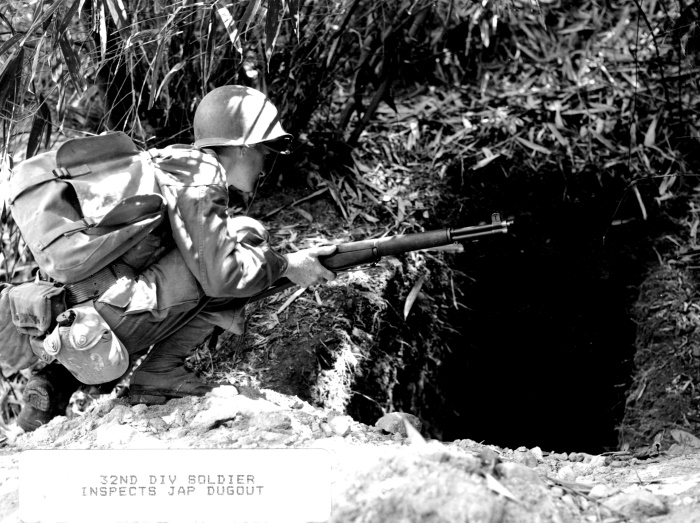 The 511-PIR was reinforced by the 2/187-GIR, and continued its slow but steady progress. On Dec 17, it broke through the Japanese lines and arrived at the western shoreline of Leyte, linking up with elements of the 32nd Infantry Division. It was during this period that Pvt Elmer E. Fryar earned a posthumous Medal of Honor when he helped to repel a counter-attack, personally killing twenty-seven Japanese soldiers before being mortally wounded by a sniper.
The regiment was ordered to set up temporary defensive positions before being relieved on Dec 25, by the 1/187-GIR, and the 2/188-GIR, who would themselves incur considerable casualties against a heavily dug-in enemy. The 511-PIR was reassembled at its original base camp in Leyte on Jan 15, 1945.

Luzon On Jan 22, the division was placed on alert for an operation on the island of Luzon, to the north of Leyte. Five days later the 187-GIR and the 188-GIR were embarked for Luzon by sea, while the 511-PIR flew by C-46 Commando transport aircraft to Mindoro. At dawn, on Jan 31, the 188-GIR led an amphibious assault near Nasugbu, in southern Luzon. Supported by a short naval barrage, A-20 Havoc light bombers, and P-38 Lightning fighter aircraft, a beachhead was established in the face of light Japanese resistance. The regiment moved rapidly to secure Nasugbu, after which its 1st Bn advanced up the island’s arterial Highway 17 to deny the Japanese time to establish defenses further inland. The 2nd Bn moved south, crossing the River Lian and securing the division’s right flank. 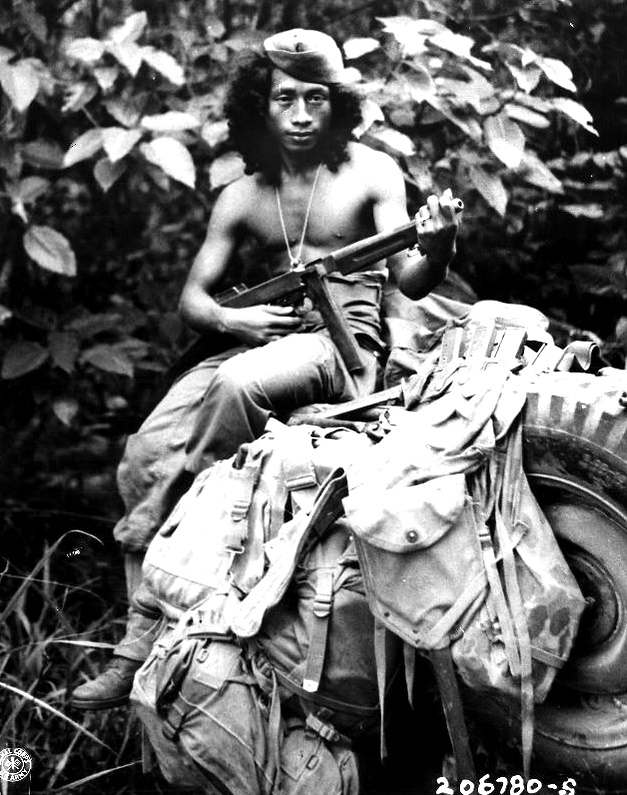 By 1030, elements of the 188-GIR had pushed deep into southern Luzon, creating the space for the 187-GIR to come ashore. The 2/188-GIR was relieved and the regiment continued its advance, reaching the River Palico by 1430, and securing a vital bridge before it could be destroyed by Japanese combat engineers. Meanwhile, troops of the 188-GIR made their way through the town of Nasugbu.

Following Highway 17 to Tumalin, the regiment began to encounter heavier Japanese resistance. At midnight the 187-GIR took over the lead and the two glider regiments rested briefly before tackling the main Japanese defensive lines. These consisted of trenches linked to bunkers and fortified caves and were manned by several hundred infantry with numerous artillery pieces in support. At 0900, on Feb 1, the gliders launched their assault, and by midday had managed to break through the first Japanese position; they spent the rest of the day conducting mopping-up operations. On the morning of Feb 2, the second line was breached, and by midnight the third line was overrun. The divisional recon platoon was now in the vicinity of the Tagaytay Ridge, the intended site of the 511-PIR’s first combat drop.

The 511-PIR’s airborne operation had originally been scheduled for Feb 2, but with Gen Swing’s insistence that the drop was only to go ahead if his ground forces were in range to offer support, the dogged Japanese resistance encountered delayed the operation. With only forty-eight C-47 Skytrain transport aircraft available, the 511-PÏR was forced to deploy in three waves. The regimental staff, the 2/511, and half of the 3/511 would drop first, the rest of the regiment would arrive in the second lift. The 457-PFAB would drop in the third.

At 0700, on Feb 3, the first lift left Mindoro protected by an escort of P-61 Black Widow night fighters. Arriving over Luzon, they followed Highway 17 to Tagaytay Ridge. The ridge itself was an open space some two thousand yards (1800 M) long and four thousand yards (3700 M) wide, plowed in places, and had been largely cleared of Japanese troops by local Filipino soldiers and recognized guerrillas.
At 0815, the first echelon of the first lift, approximately 345 men, successfully parachuted into the drop zone. The second echelon, consisting of approximately 570 men, was dropped prematurely and landed about eight thousand yards (7300 M) to the east. The next lift also encountered problems, with 425 men dropping correctly but another 1325 dropping early due to pilot error and poor jump discipline. However, the entire regiment was assembled within five hours of the first landings.