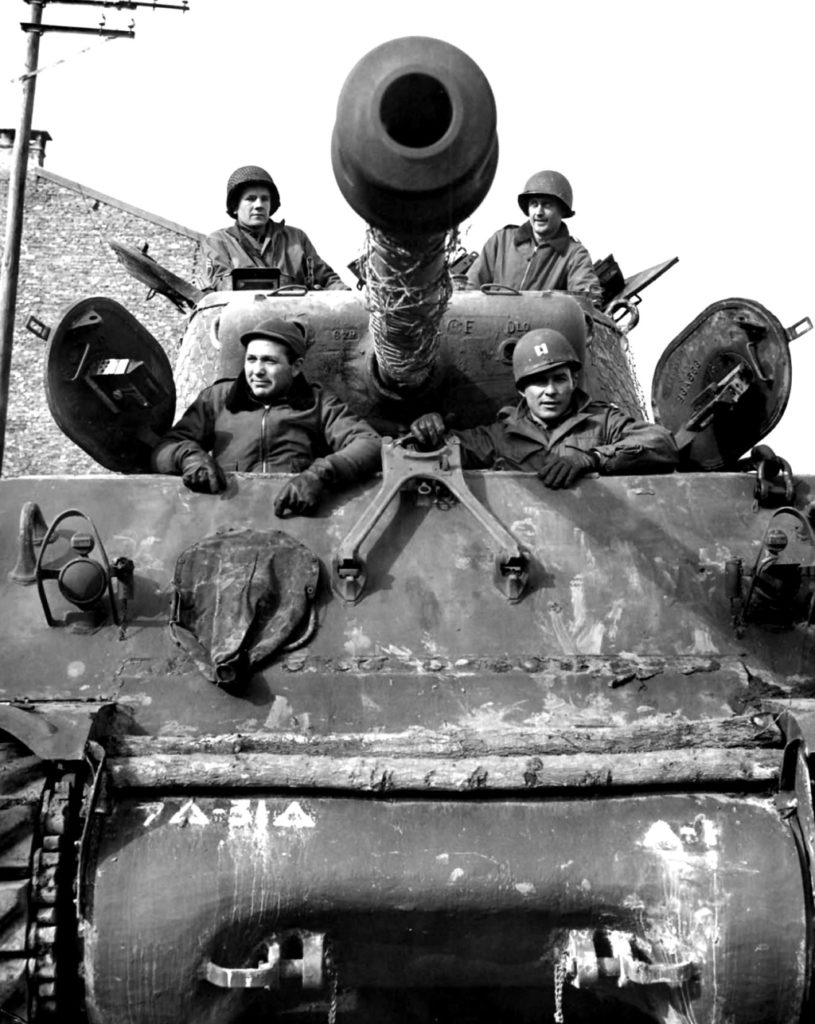 This is the narrative of one phase of the greatest pitched battle on the Western Front in World War II. The battle at St Vith (Dec 17-23, 1944) is an excellent example of how American troops held their ground in the midst of confusion, defeat, and uncertainty; and thereby threw the German timetable sufficiently off schedule to allow American forces to regroup, hold, and then counterattack. The stand at St Vith has been recognized by both German and Allied commanders as a turning point in the Battle of the Bulge.

Gen Eisenhower fully appreciated the time given to him by the defenders of St Vith when on Dec 23 he addressed all commanders in the defensive horseshoe: the magnificent job you are doing is having a great beneficial effect on our whole situation. I am personally grateful to you and wish you would let all of your people know that if they continue to carry out their mission with the splendid spirit they have so far shown, they will have deserved well in their country. The German plan for the Ardennes counter-offensive is supposed to have been conceived by Hitler himself during the summer of 1944. The plan was not well received by the German generals (they had also been lukewarm to the Ardennes offensive of 1940), who felt that it was far too ambitious. It was not to be the banzai charge of a hopeless foe, however, but a well-planned and coordinated attack calculated to strike the American line in a relatively quiet sector with overwhelming force and to drive on to Anvers and Bruxelles before counter-measures could be taken. The success of this plan might well have changed the entire course of the war.

The academic questions as to the strategic soundness of this offensive, which was raised by German and Allied generals after the war, hold little interest to the men who were called upon to stand against overwhelming odds and turn back the onslaught. This story is concerned with the defense of the St Vith salient and will not deal with speculations as to the strategic expediency of the German plan. To be successful, it was necessary for the German counter-offensive to be carried out with surprise and speed. As the record indicates, the surprise was attained.

I told the Fuehrer on the first day of the attack that surprise had been completely achieved; the best indication was that no reinforcements were made in your sector before the attack, commented Generaloberst Alfred Jodl after the war.
Nothing else as a small local diversion, one American intelligence officer remarked after the first day.

How our intelligence could so mistake an attack of some 17 divisions representing probably a total of 200.000 men is not our problem here; it is enough to say that the surprise was gained by the enemy. The fact that speed was denied the enemy caused his defeat. The entire operation demanded that German spearheads be driven deep into the American rear installations, thus paralyzing the American ability and will to strike back.

I expected the right corps to capture St Vith on the first day of the attack and hoped that in the evening of the second day of the attack its advance detachments would be engaged west of the Salm River and the bulk of its forces at Vielsalm (General d. Panzertruppen Hasso E. von Manteuffel).

The Report of Operations, of the US 1-A, points out: the elimination of the St Vith salient was of prime importance to the German Commander in Chief West. Because of the delay imposed here, the offensive was already three days behind schedule. In retrospect, it can be said that almost from the second day of the offensive, GFM Gerd von Rundstedt‘s plan began to go wrong.

Late on December 16, GFM Walter Model, commander of Army Group B, ordered: quick exploitation of the successes of the first day of the attack is decisive. The first objective is to achieve liberty of movement for the mobile units.

The stubborn defense of St Vith contributed materially to delaying the enemy and is credited as a major factor in the failure of the German main effort. The importance of the stand at St Vith is described in the 1-A Report of Operations: Without the communications center of St Vith, the focal point of five main highways and three rail lines, the enemy’s armored, infantry, and supply columns were all practically immobilized. The rugged, hilly terrain of the Belgian Ardennes, heavily forested, permitted no cross-country movement. The few columns able to move struggled along muddy, cratered, narrow secondary mads.

Traffic was jammed bumper-to-bumper for miles from the original point of departure and provided excellent targets for our artillery and fighter bombers. Also, lacking St Vith and its high ground the enemy could not launch his ‘Operation Greif’ in accordance with the plan. The salient at St Vith not only threatened the whole of Gen Manteuffel’s 5.Panzer-Army’s northern flank but continued to prevent the movement of the ‎SS-Oberst-Gruppenführer Dietrich’s 6.Panzer-Army. This afforded Gen Courtney Hodges’s 1-A sufficient time to bring up reinforcements to a new defensive line

On the eve of the German attack, the US 1-A (Gen Courtney Hodges) held a 165-mile front, roughly from Aachen to the southern tip of the Grand Duchy of Luxemburg. The US 3-A (Gen George S. Patton) was on the south flank and the new 9-A (Gen William Hood Simpson) was on the north flank. The 1-A had three corps in the line: the VII Corps (Gen Lawton J. Collins) in the north pushing toward the Roer River, the V Corps (Gen Leonard T. Gerow) in the center probing towards the Roer Dams, and the VIII Corps (Gen Troy Middleton) holding approximately a 90-mile front in the relatively quiet Ardennes sector. The 2nd Infantry Division (Gen Walter M. Robertson) and the 99th Infantry Division (Gen Walter E. Lauer) held the south flank of Gerow’s V Corps, nearest VIII Corps. The gap between the V and the VIII Corps was held by the 14th Cavalry Regiment (Mez) (Col Mark Devine) under the VIII Corps’ control. The VIII Corps sector front was held as follows, Northern Sector by Gen Allan W. Jones’ 106th Infantry Division, which had just arrived in Europe and had not yet received its baptism of fire; Center Sector by Gen Norman Cota’s 28th Infantry Division, whose front extended for 27 miles, east of Bastogne and the Southern Sector by units of Gen John W. Leonard’s 9th Armored Division and Gen Raymond O. Barton’s 4th Infantry Division. Although the sector was lightly held, it was considered improbable that a large-scale counter-attack would be attempted over this terrain under winter conditions. Gen Eisenhower and Gen Bradley accepted the calculated risk.

It was not even rated as much of a gamble; the American front was offensive-minded; the mental approach of all ranks was one of attack; no real action was anticipated here, hence the Allied portion of the line was not built up for attack. Intelligence reports of German troop concentrations were interpreted as an indication of a stiffer German defense. Our intelligence officers were optimists. Few seemed seriously to consider that the German had a Sunday punch left. As finally ordered, the German plan earmarked elements of 17 divisions for the first day’s attack. To the north, Dietrich’s 6.Panzer-Army sought to open a hole and to turn two SS panzer divisions of the I.SS-Panzer-Corps loose for a dash to the Meuse River. The infantry of Dietrich’s army collided head-on with Gen Gerow’s V Corps and Gen Lauer’s 99-ID finally, on Dec 19, fell back a couple of thousand yards to the Elsenborn Ridge; and there, with the help of the 26-IR (1-ID), withstood all enemy attacks and formed an anchor on the line.

South of Dietrich’s 6.Panzer-Army, Manteuffel’s 5.Panzer-Army planned to strike using tank and infantry teams with only light artillery preparations. The LXVI Corps, (Lucht), was to strike Gen Jones’ 106-ID, isolate the Schnee Eifel, and drive rapidly into St Vith. Meanwhile, to the south, the LVIII Corps and the XLVII Corps were to burst through Gen Cota’s 28-ID, isolate Bastogne, and then drive on to the Meuse Riverwith the panzer divisions. The 7.Army (Brandenberger), was to push back Gen Barton’s 4-ID, furnish flank protection, and stem any attempt to reinforce the battle area from the south. With this picture, it can be seen that the mailed fist was pointed, poised, and ready to strike. Now, let us see how the blow was received by the troops in the St Vith area.

On that bleak cold morning of Dec 16, 1944, Germans troops from Manteuffel’s 5.Panzer-Army sprang out of hiding in the dense forests of the German part of the Schnee Eifel and began a gigantic pincer movement around the Schnee Eifel, the large ridge mass about 16 miles due east of St Vith. Astride these ridgelines were the 422-IR and the 423-IR (106-ID), which had landed in France less than two weeks prior to this time; this unit had been sent to the Ardennes for a conditioning and seasoning program prior to heavy fighting. 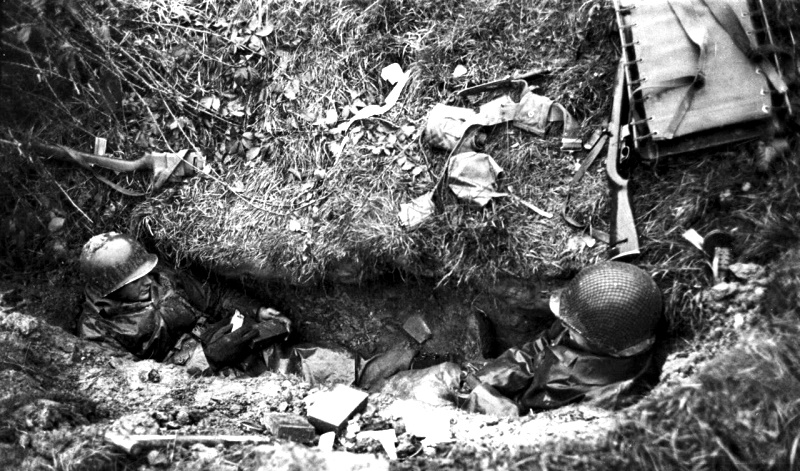 Find someone who sees you the way AI sees you 🤓

Mind yo business, crush your goals, and make moves in silence. You don’t need an audience to achieve greatness. You need to focus 😎

Ed The Red - Summer is the coldest season (Nigel Lowis