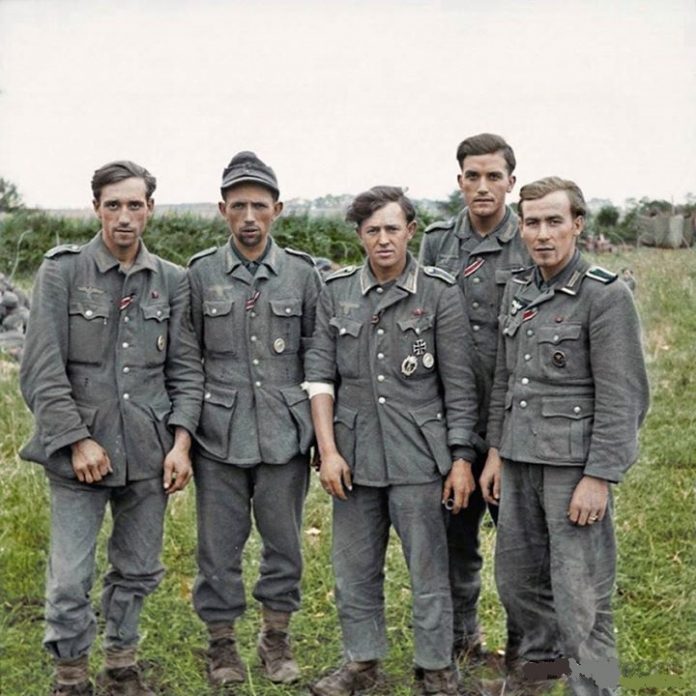 (1) A total of 33 Prisoners of War were processed through the Division Cage during the period.

(2) Prisoners from the 2nd Company, 25-Panzergrenadier-Division of the 12.SS-Panzer-Division stated that the 1st Battalion had been located 15 KM West of Cologne until November 21, the at Niederzier (F105553) until it moved to the front, where it arrived on December 16.

Composition of the Unit
Three platoons of the 2nd Company have 6 LMGs each, the 4th platoon has 4 HMGs and 2 80-MM mortars. Most men carry a 98-K rifle.

Disposition
The 2nd Company dug in on the edge of the woods at K993040-994002 and attacked from this position. The 1st Company and the 4th Company were on the right, the 3rd Company to the rear.

Miscellaneous
The CO of the 2nd Company was Lt Hansen or Hansel. One Prisoner saw a 210-MM arty unplaced in concrete near Niederzier (F105553). A large estate at F120556 was used as an assembly area.

(3) One of the Prisoners of the 6th Company, 25.SS-Panzergrenadier-Division was fighting with the 3rd Company of the 989.Infantry-Regiment. He is not considered as identification of the 2nd Battalion of the regiment.

(4) Prisoners from the 1st, 3rd, and the 4th Companies of the 989.Infantry-Regiment (277.Infantry-Division) estimates an extremely high number of casualties in their companies. The 3rd Company, for example, has 7 men remaining of an original 70, while the 1st Company has only 4. The statements are probably exaggerated and indicate merely that morale in the battalion has been lowered by casualties.

Disposition
The 1st Battalion was relieved in the Simmerath (K9824) area on November 19. It furnished the fist wave of the attack in Krinkelt (E9704) and was followed by the 2nd Battalion with three assault guns and of the 2 SS Panzergrenadier Companies.

(5) Prisoner from the 7th Company of the 989.Infantry-Regiment stated that their original strength was 100 men, but that they suffered heavy casualties the first day of the attack. They had heard a rumor that there were no more reserves behind the 2nd Battalion.

Miscellaneous
The CO of the 7th Company was 1/Lt Schultz. One Prisoner heard that the assault guns in Krinkelt had been knocked out by German Panzerfaust/Panzerschreck after being falsely identified as American tanks. In view of the situation in Krinkelt, this statement is plausible.

Mission of the Unit
A Prisoner had heard that the objective of this attack was Liège.

Composition of the Unit
120 men with 46 Panzerfaust/Panzerschreck.

(7) A Prisoner from the Engineer Platoon, HQ Company, 990.Infantry-Regiment (277.Infantry-Division) had heard that if the Germans lose the war and we occupy Germany, we intend to castrate all the German males.

Mission of the Unit
During the attack, the platoon clears roads and remove obstacles. Recently, the platoon had constructed wooden bunkers.

Miscellaneous
Last night, Prisoners guarded 20 American Prisoners who were recaptured before their statement that reinforcements were reported at 0200 could be transmitted to the rear. There was no systematic interrogation of American Prisoners of War. Prisoners observed much activity in the Rail Roads yards at Schleiden (K1015) on December 9. He also saw troops of the 9.SS-Panzer-Division and 1.SS-Panzer-Division. The latter was going North. The original Engineer Platoon was 60 men strong. Casualties estimated at 50%. Old minefields are marked by ginster plants.

(8) Prisoners from the 12th Engineer Battalion attached to the 2nd Company of the 27.Infantry-Regiment (12.Infantry-Division) are believed to have been captured near Mürringen (K9802).

Mission of the Unit
1st Battalion of the 27.Infantry-Regiment was to attack at 17.30 on December 17.

Miscellaneous
1st Battalion was in Ahremberg (K3424) for 60 days before moving to the front on November 16. V-1s were discharged several KM East of Ahremberg. So many fell short that soldiers feared them more than our artillery. SS troops are boasting that they will celebrate Christmas in Paris.

(9) Prisoners from the 1st Battalion of the 27.Infantry-Regiment state that only the 1st and the 3rd Battalions exist in this regiment. The 2nd Battalion was never formed. SS men are on their left flank.

(10) A deserter from the 2nd Battery of the 501.Artillery-Battalion, is identified further as belonging to the 13.Artillery-Regiment, 4.Army.

Mission of the Unit
To support attack of the 1.SS-Panzer-Division and 12.Infantry-Division.

Composition of the Unit
The 501.Artillery-Battalion contains one battery of 3 170-MM guns and 3 batteries of 4 210-MM howitzers, maximum range 17 KM. The 2nd Battery strength was 140 men.

Miscellaneous
Morale of the unit is not high. Food for four men for one day consists of one loaf of bread, 30 grams butter, stew at noon, and sometimes 50 grams sausage. The CO of the battery had read Ruendstedt’s orders to the troops regarding the offensive. Men of the unit always carry gas masks.

Next steps: end all COVID vax mandates (healthcare workers and foreign visitors), and reinstate all members of military wrongfully terminated due to vax.

@Samanth48487861 Last January. Younger brothers birthday. He passed 9 years ago at 51. It was about 5am. I was drinking coffee, waking up, praying & thinking about Doug. I look out to see 2 ermines playing in the snow. Have video, they were there all day. Not seen since. Thank you God❣️❣️

The days of Microsoft pricing its flagship Xbox games at $59.99 are coming to an end. Starting next year, first-party titles for the Xbox will hit store shelves at $69.99.