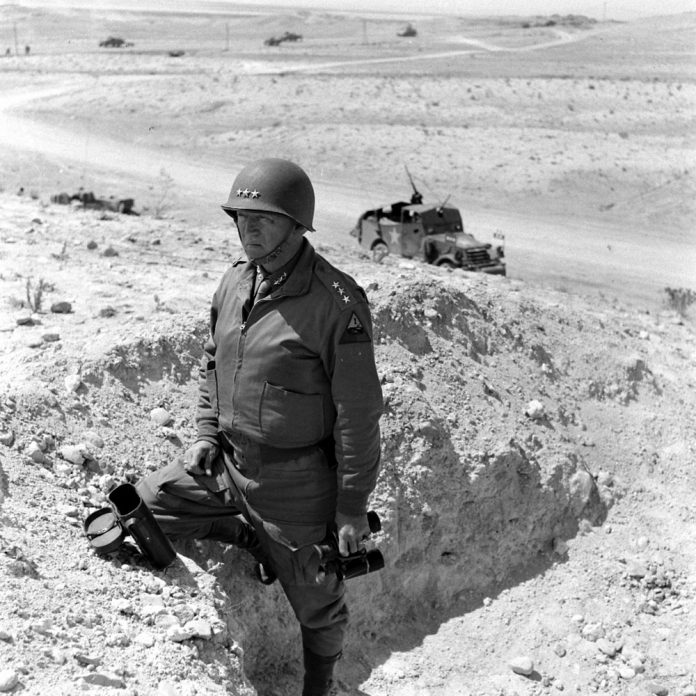 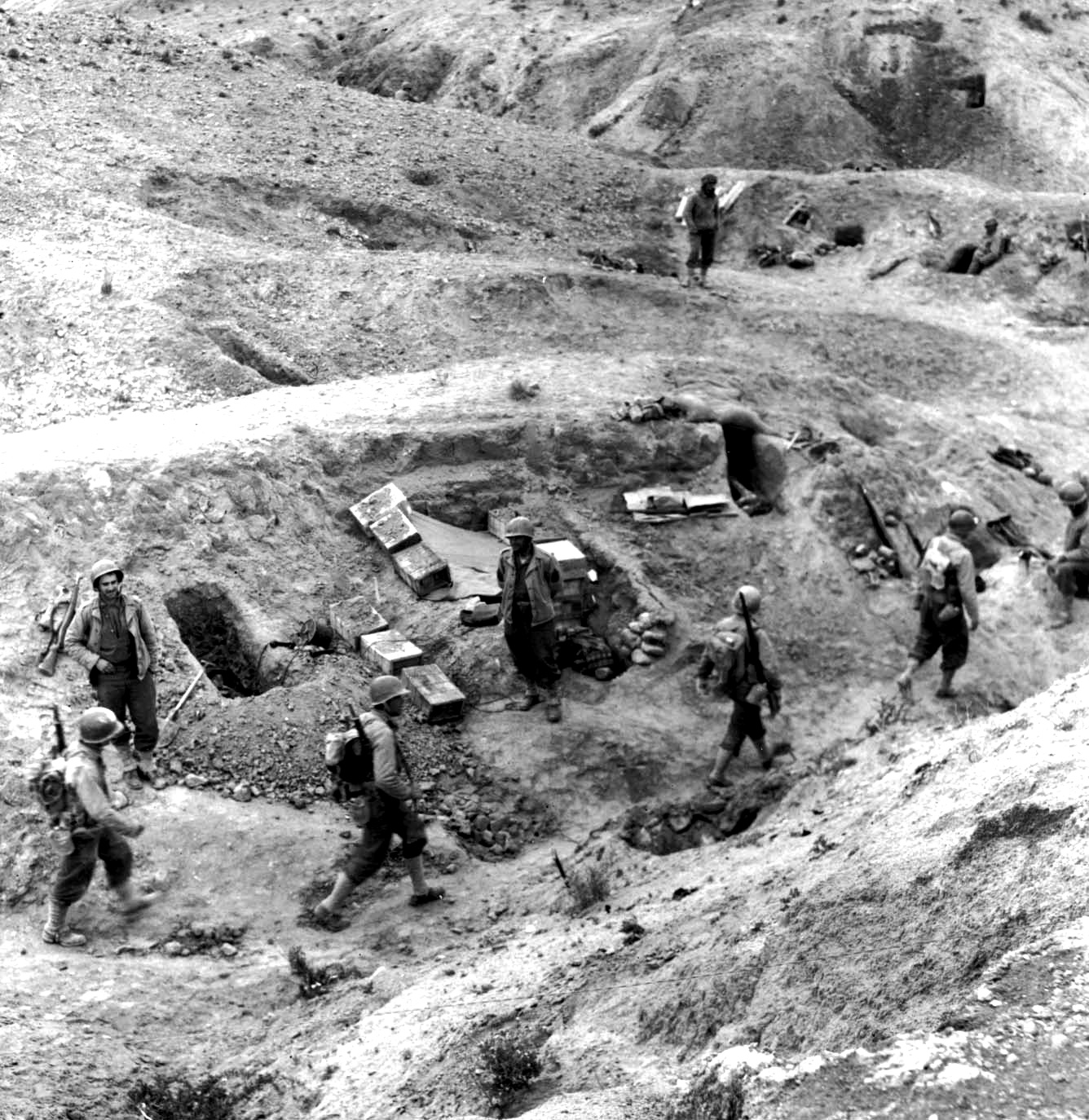 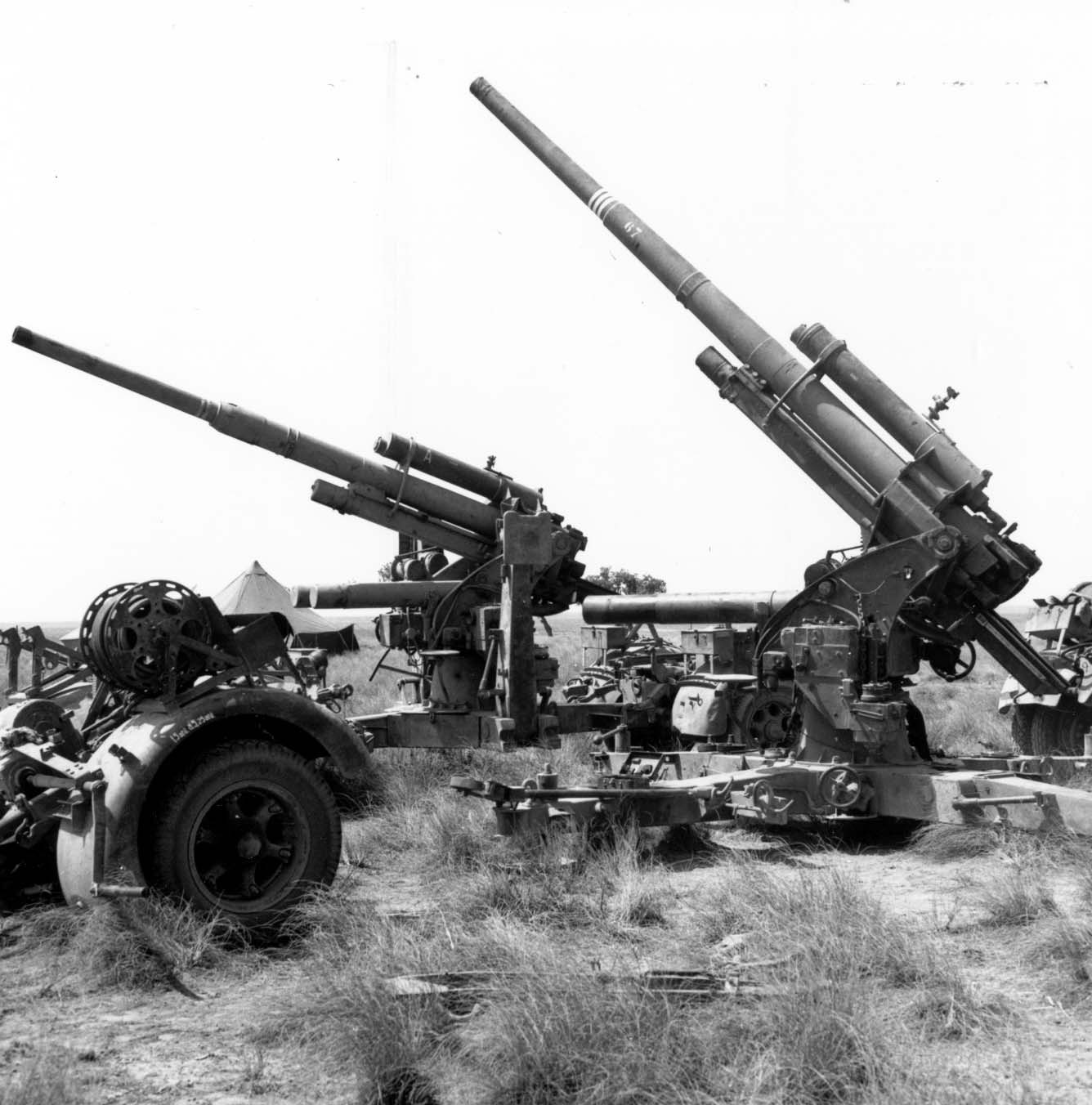 The Famous German Eighty-Eight. The original weapon, an Austrian 88-MM cannon, was used in World War I. Restrictions imposed by the Allies after that war limited German experimentation on conventional offensive artillery but not on defensive artillery such as antiaircraft types (in photograph). With different sets of aiming fire instruments this antiaircraft gun could be used as an antitank gun or a conventional piece of artillery. It was tested as an antiaircraft gun under battle conditions during the Spanish Civil War in 1936. Encountered throughout the war in increasing numbers, it was probably the most effective all-around piece of artillery the Germans had. (left) 8.8-cm. Flak 36; (right) 8.8-cm. Flak 18)

German Antitank Guns. These guns, effective against Allied armor, fired armor-piercing shells loaded with high-explosive fillers designed to burst inside the armor and to set the tank on fire. Antitank gun (above) could penetrate the armor of any Allied tank, front, side, or rear. Both US and British armor-piercing shells were solid and did not fire the tanks; thus the Germans were able to salvage damaged armored equipment to a greater extent than were the Allies. It was not until well into the Italian campaign that armor-piercing shells equipped with fuzes and high-explosive fillers became available to Allied forces. (above) German antitank gun, 7.5-cm Pak 40; (bottom) German antitank gun, 5-cm Pak 38) 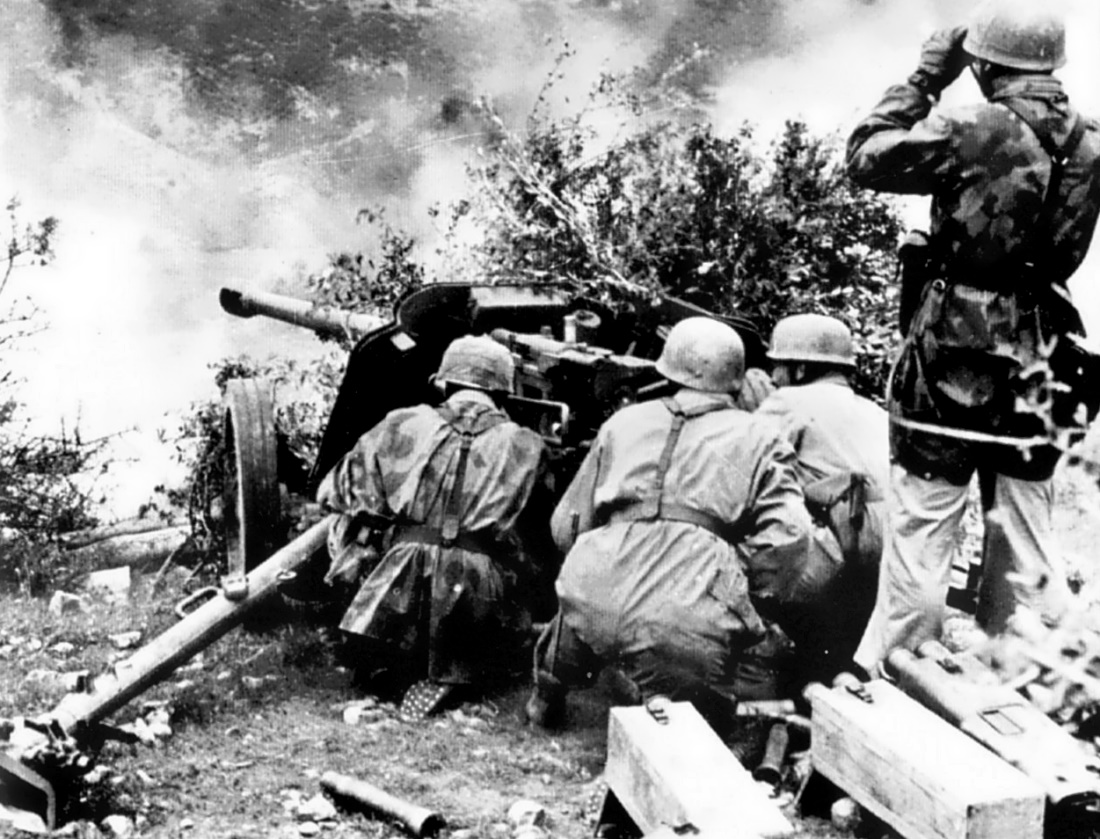 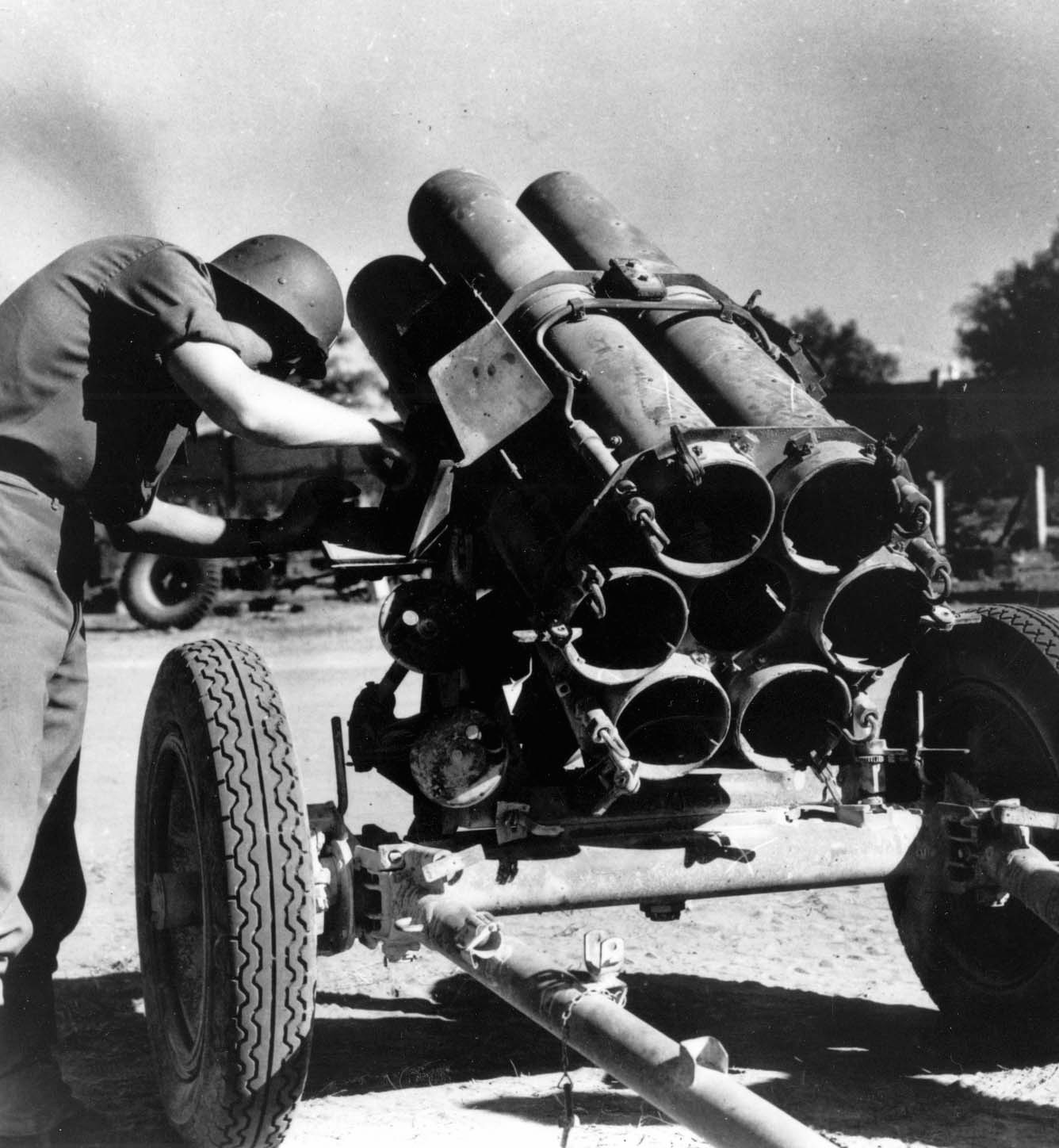 (Above and Below) German Six-Barreled Rocket Launcher. This weapon fired high explosive, incendiary or smoke rockets and was light enough to be moved with ease. The screaming sound of the rockets had an adverse psychological effect on troops at the receiving end and the rockets were nicknamed ‘Screaming Meemies’. Artillery sound-ranging equipment could not locate the rocket launchers because firing did not cause a report. The enemy used this type of weapon until the end of the war. (15-cm Nebelwerfer 41) 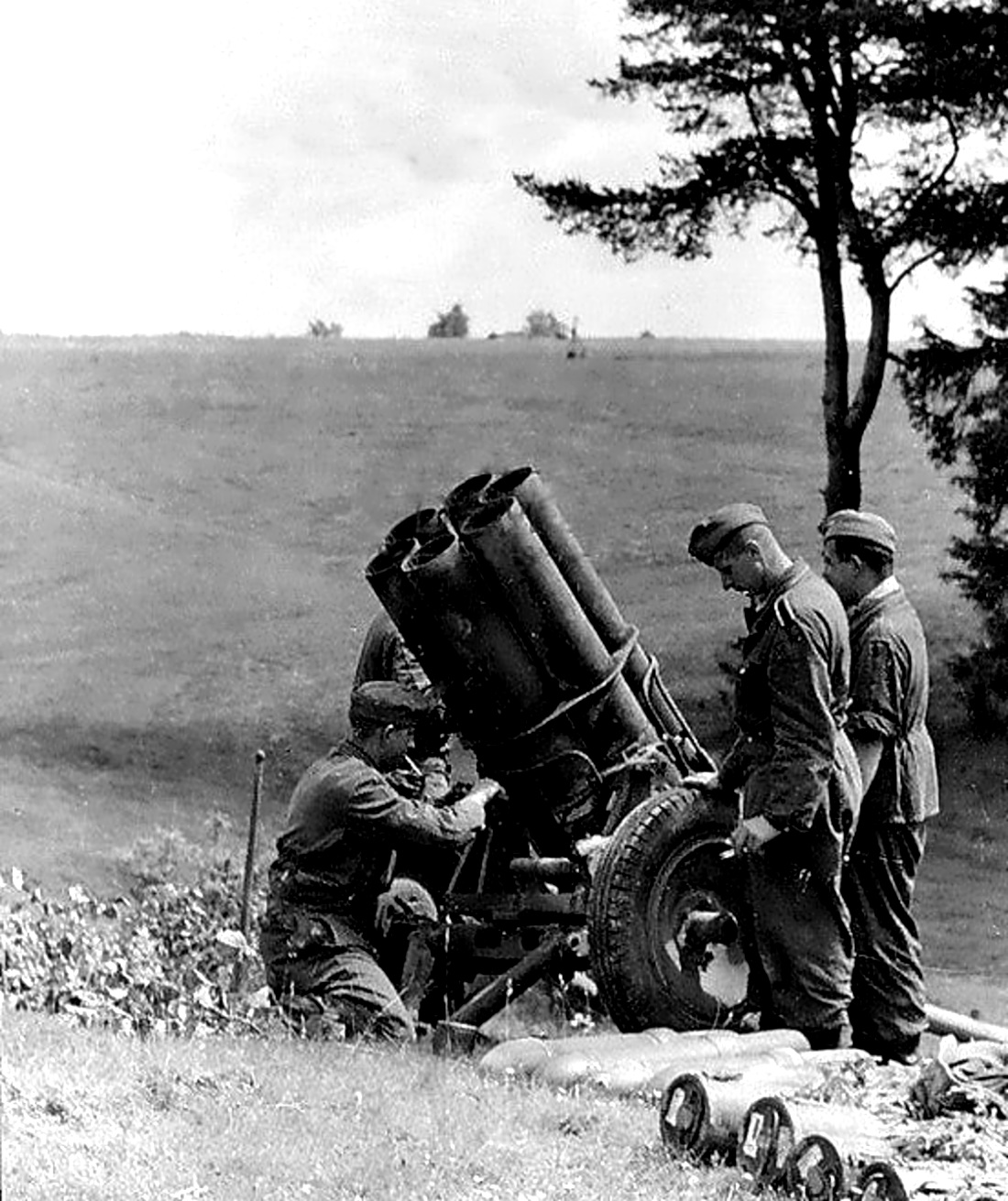 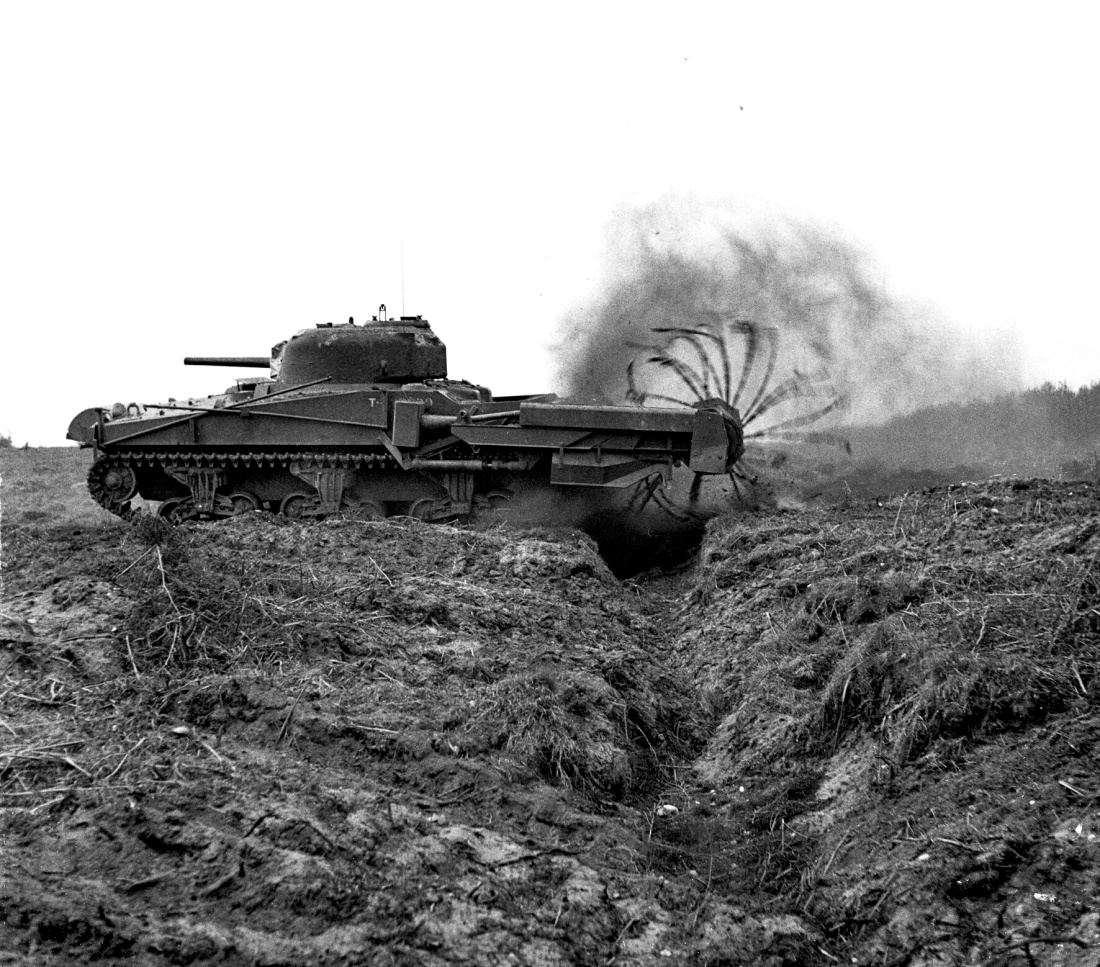 (Above and Below) Sherman Tank & Scorpion Attachment. The Scorpion was a revolving drum with chains attached (insert); when in motion it acted as a flail and could clear a path through a mine field for infantry and other tanks to follow. It was developed by the British and used extensively by them in desert warfare. 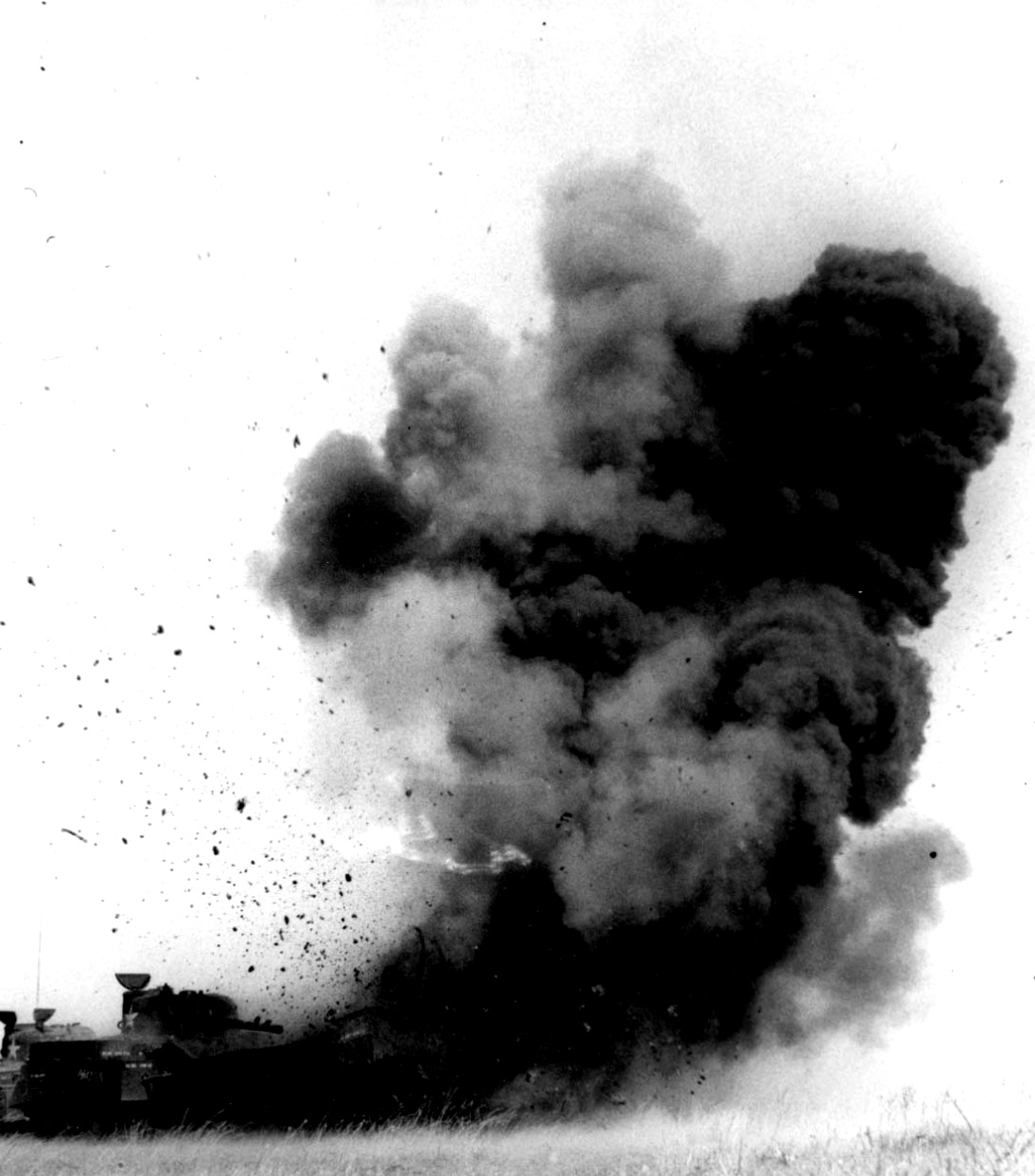 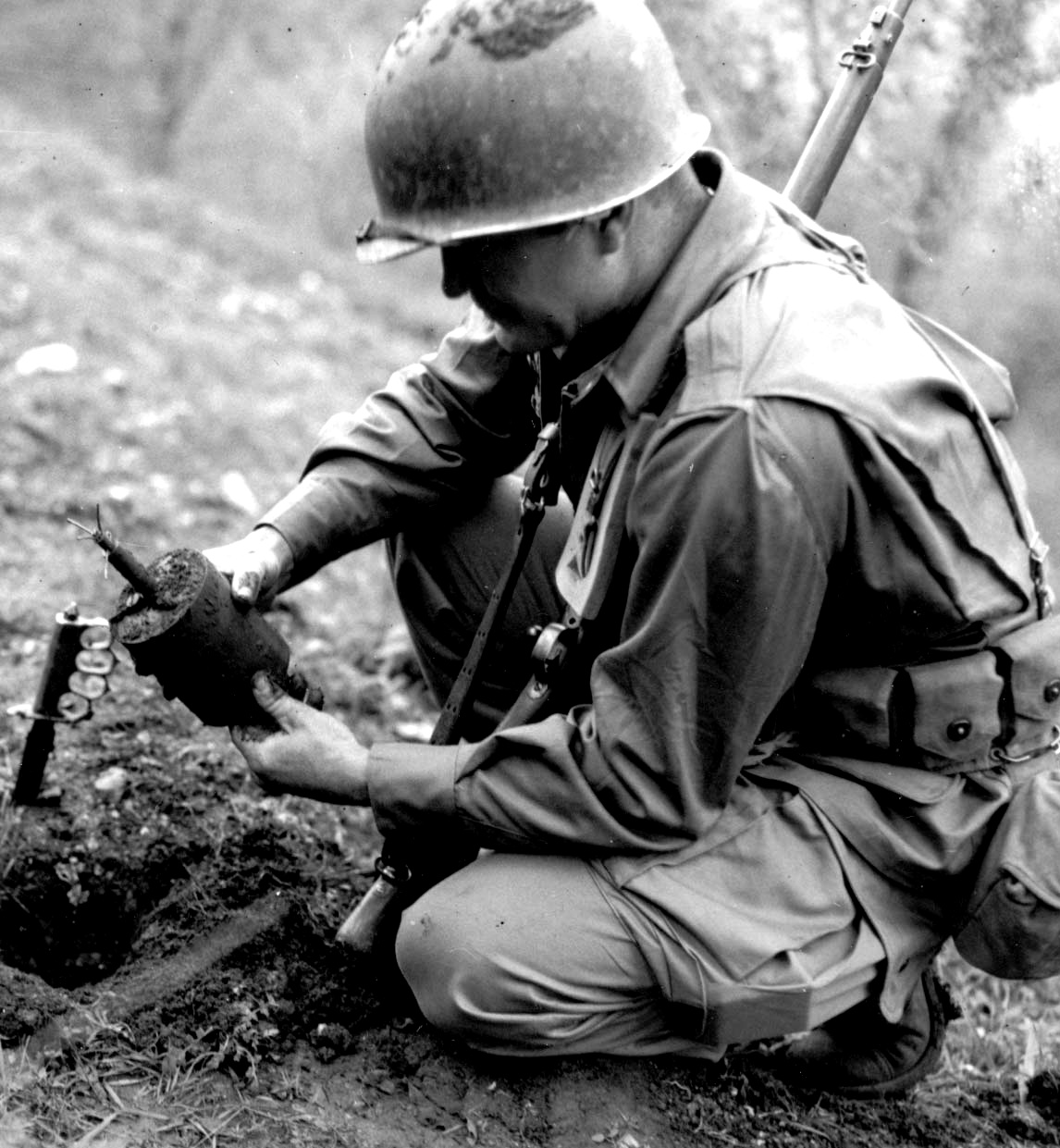 The German S-Mine. This German antipersonnel mine was used profusely and very effectively in Tunisia. It was nicknamed the Bouncing Betty because when stepped on it would bounce a few feet in the air before a secondary fuze set off the main explosive charge scattering some three hundred steel balls in all directions. The suspected presence of these mines naturally retarded troop movements during an advance. When retreating, the enemy would frequently use this mine to booby-trap buildings, dugouts or equipment left behind. 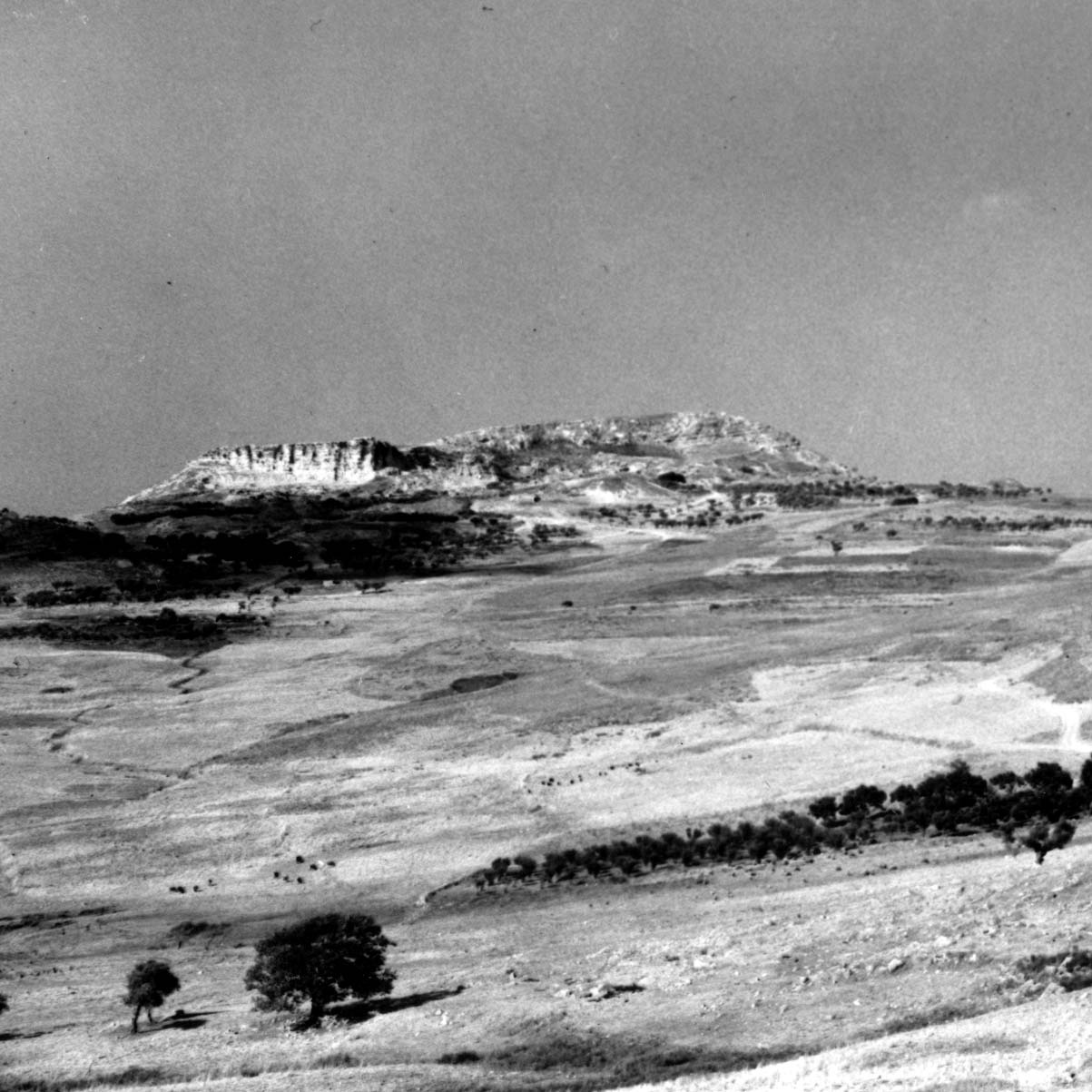 Djebel Tahent in Northern Tunisia, known as Hill 609. The British Eighth Army advancing northward along the coast replaced the US II Corps in the Gafsa–Gabès area in April 1943. The corps then moved northward about 150 miles and went into position from Béja to Cap Serrat. French forces along this coast came under US II Corps, which advanced in two groups, a northern wing astride the Sedjenane road and a southern wing along the Béja road, both converging on Mateur. The hill shown above was a natural fortress blocking the approach to the plains of Mateur. On April 28, 1943, artillery pounded enemy positions and on the next day the infantry attack started. After a three-day infantry fight, supported by tanks, the hill fell on May 1. 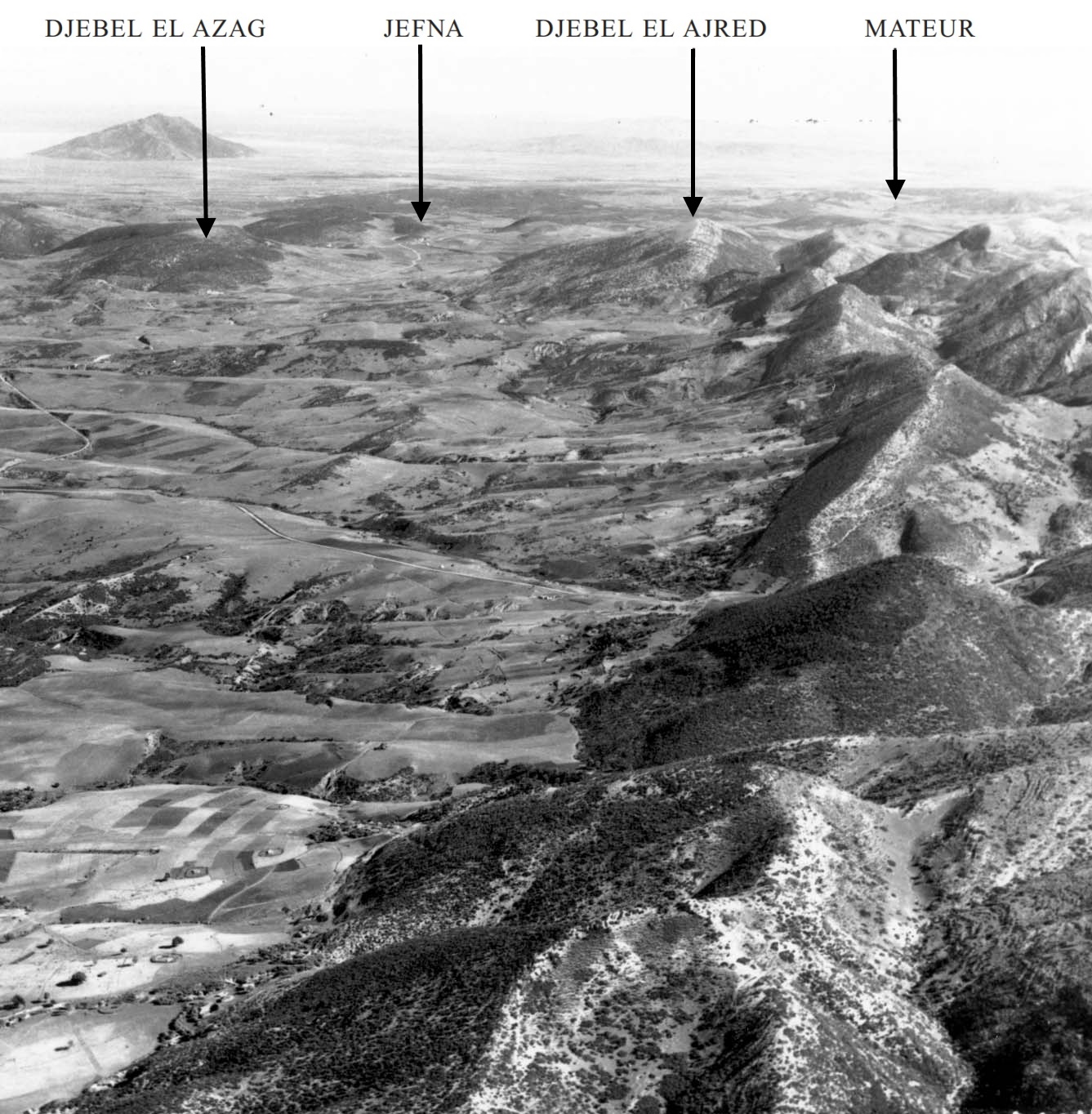 Jefna Area, Looking East to the Plains of Mateur. The Jefna position, on the Sedjenane-Mateur road, was one of the strongest German defenses in northern Tunisia and included two heavily fortified hills commanding the road to Mateur: Djebel Azag (Green Hill) on the north and Djebel el Ajred (Bald Hill) on the south. On April 13, 1943, US forces relieved the British and took positions on both sides of the road and the mountains along the valley. The fight for the two hills lasted until May 3, when the Jefna positions were outflanked by US and French forces advancing toward Bizerte and the Mateur plain north of Jefna. 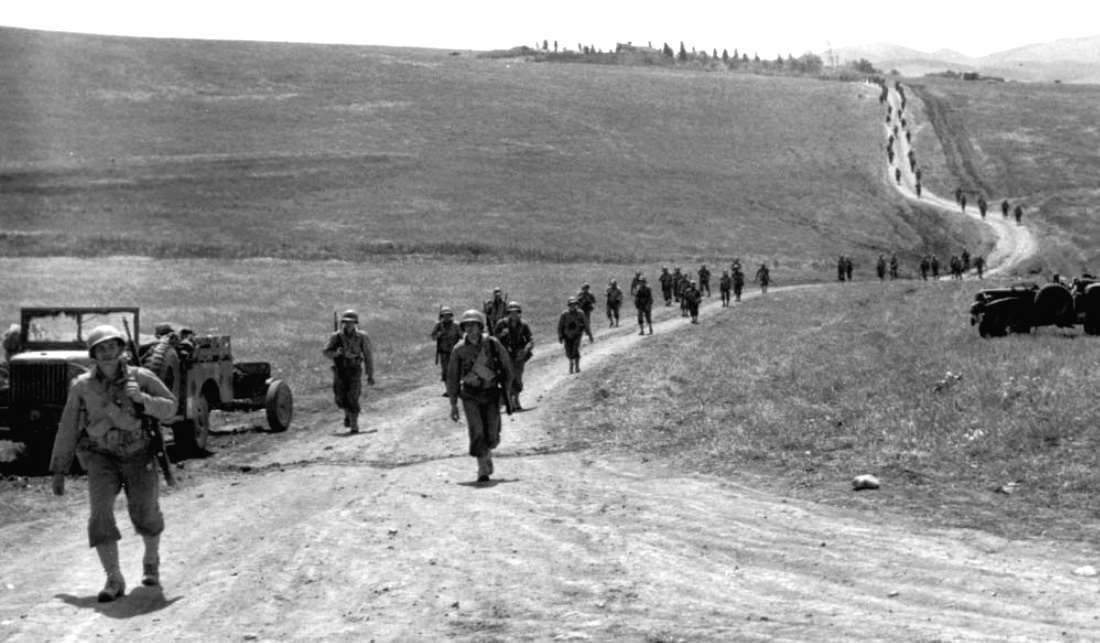 (Above and Below) Infantry and Armor advancing on Mateur. After the fall of Hill 609 the enemy pulled back leaving the road to Mateur open. This small village in the middle of a plain was the center of enemy road communications in the US zone of attack. Its occupation on May 3, opened the way for the advance on Bizerte, the main objective of the US-French drive. (Below) US Medium Tank Sherman M-4A1) 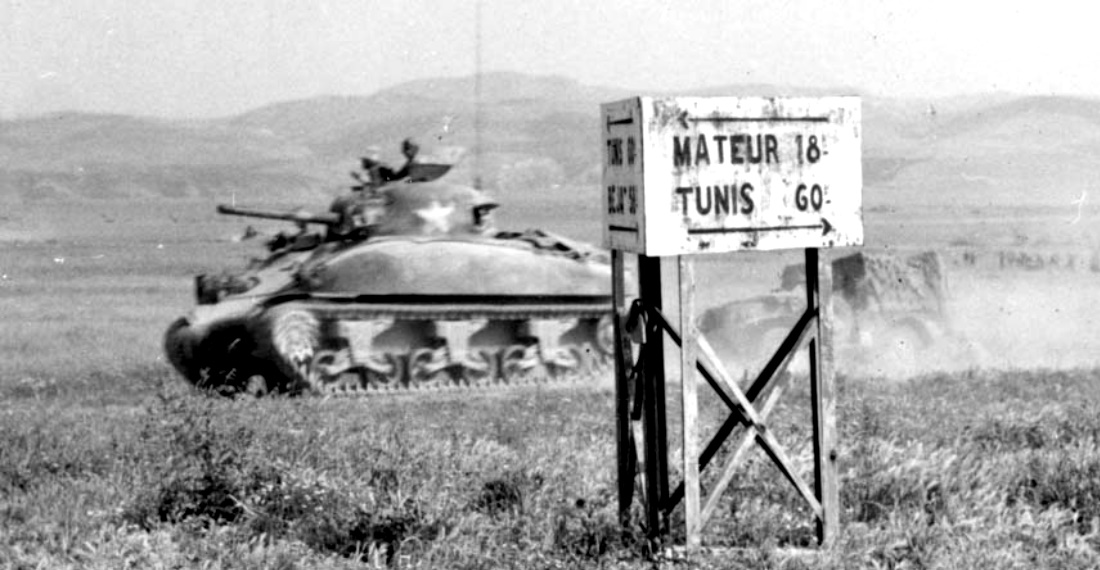 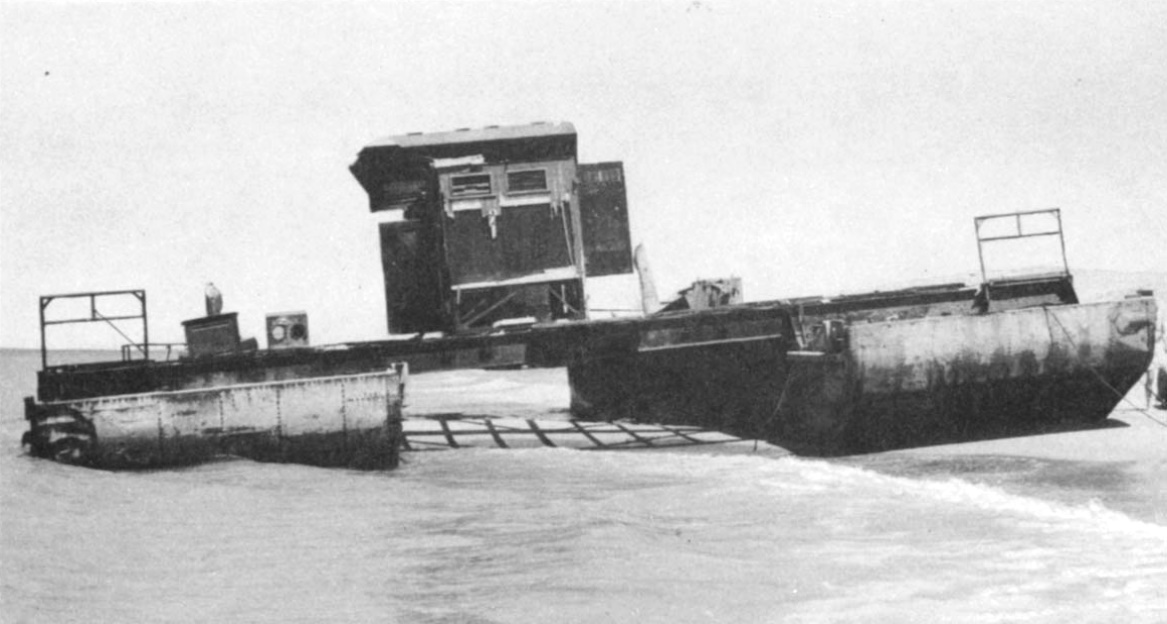 (Abobe and Below) German Siebel Ferries. These diesel-powered, ponton-raft ferries were used to transport supplies from Italy and Sicily. They usually traveled in convoys and were often heavily armed with 88-MM antiaircraft guns when moving toward Tunisia as well as with the lighter protection which they retained for the return trip. Of shallow draft, they could unload directly onto the beach, a factor which became especially important after the Allies had gained control of the air and subjected the Tunisian ports to severe bombing. 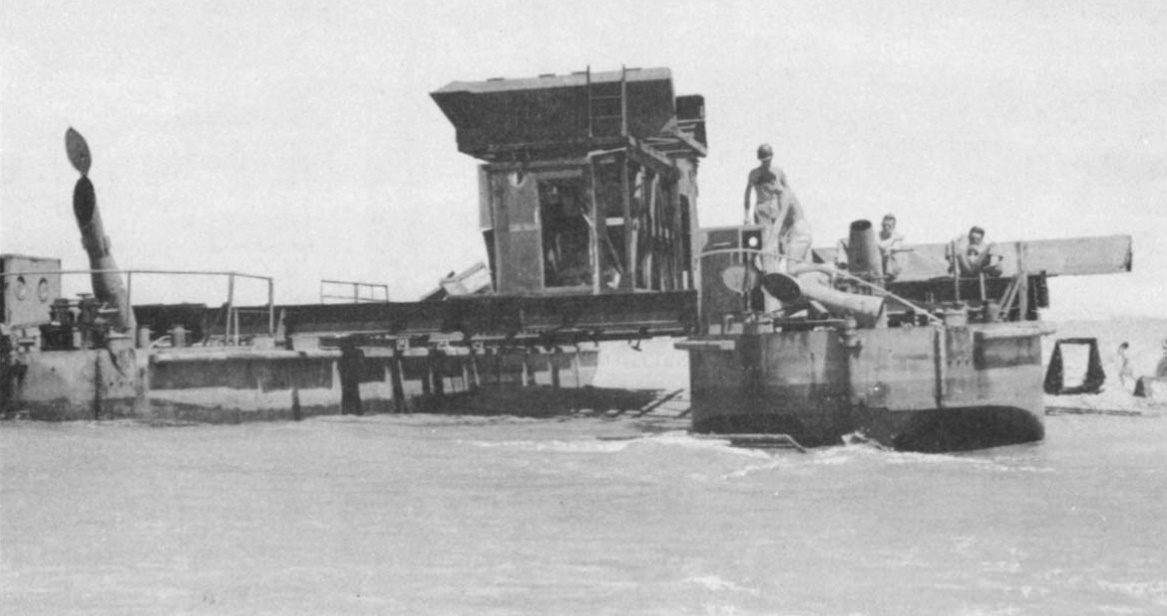 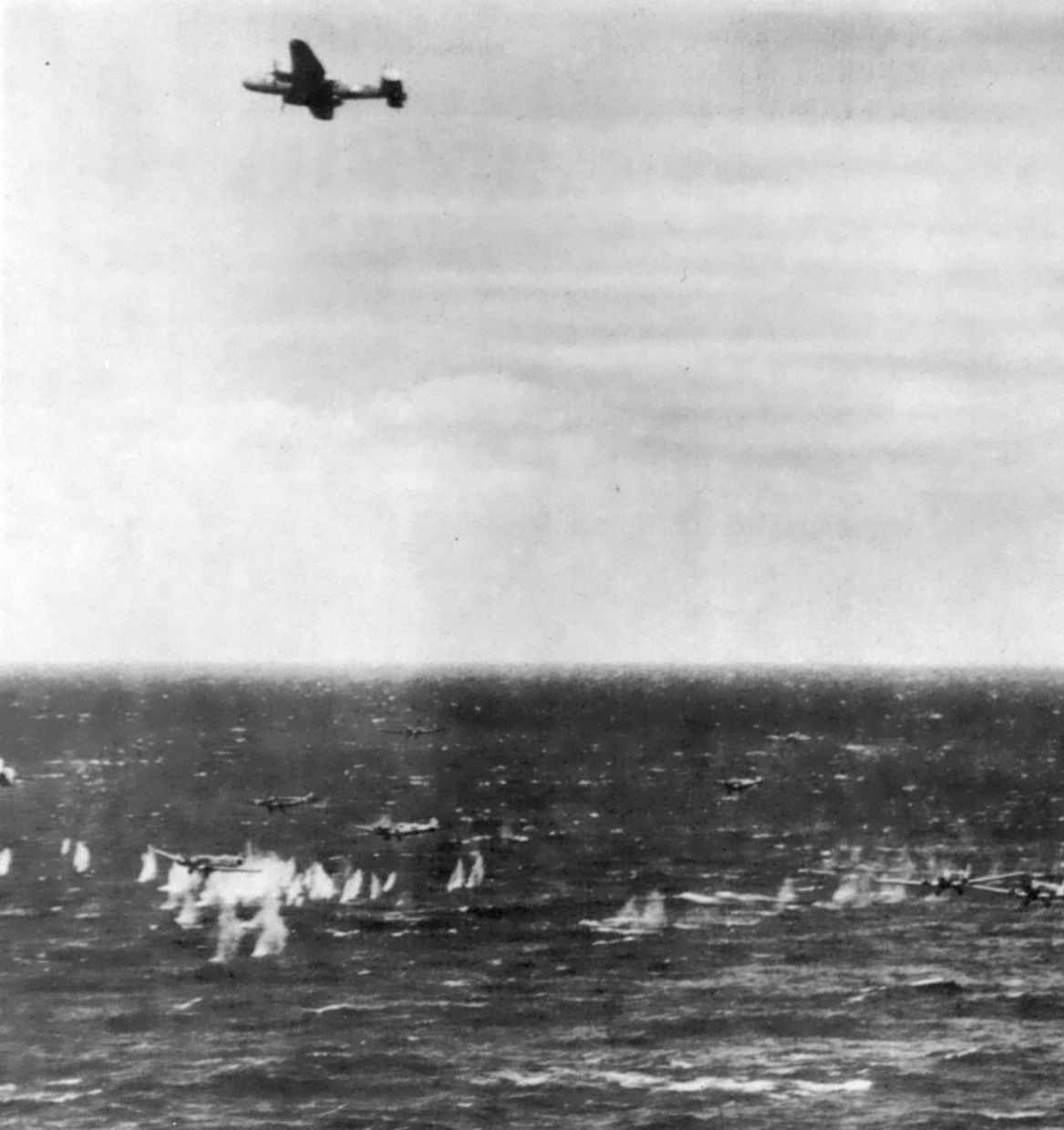 German Transport Planes JU–52, under fire from Allied aircraft. Toward the end of the Tunisia Campaign, the Germans received reinforcements by air from southern Italy and Sicily, using several hundred transports in daylight flights. The Allies gradually built up a force of planes within striking distance of the Sicilian straits and on April 5, the planned attack on the aerial ferry service started. By April 22, the enemy had lost so many planes that daylight operations were discontinued; however, some key personnel and a limited amount of emergency supplies were flown in by night. (Upper Left) Medium Bomber B–25 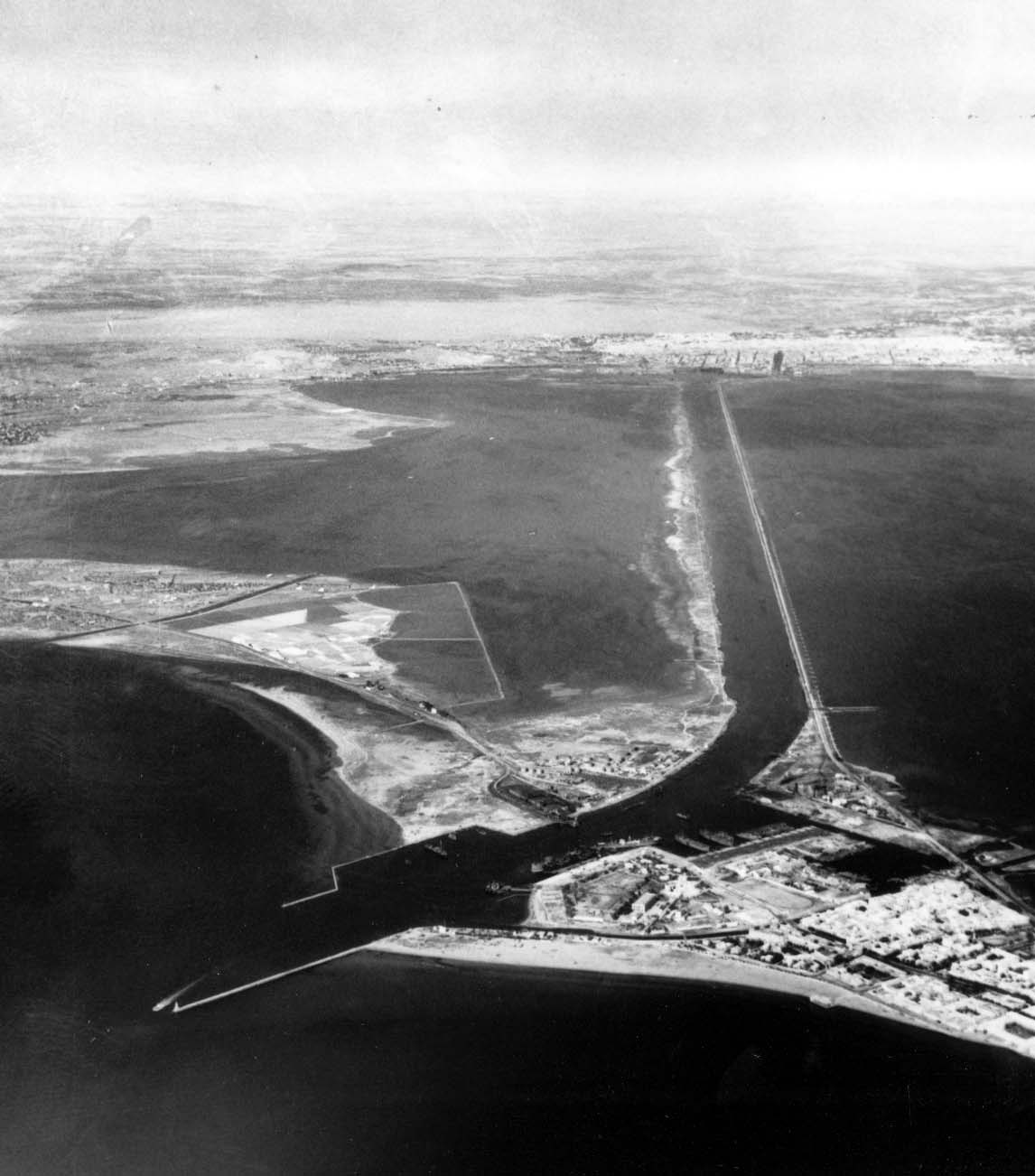 La Goulette with Tunis in Distance. These two cities fell to the British on May 7. The port of Tunis had been heavily damaged by Allied bombers, but damage in the city itself was small. La Goulette, at the entrance to the channel leading to Tunis, housed oil storage and general ship repair facilities which were put to immediate use by the Allies 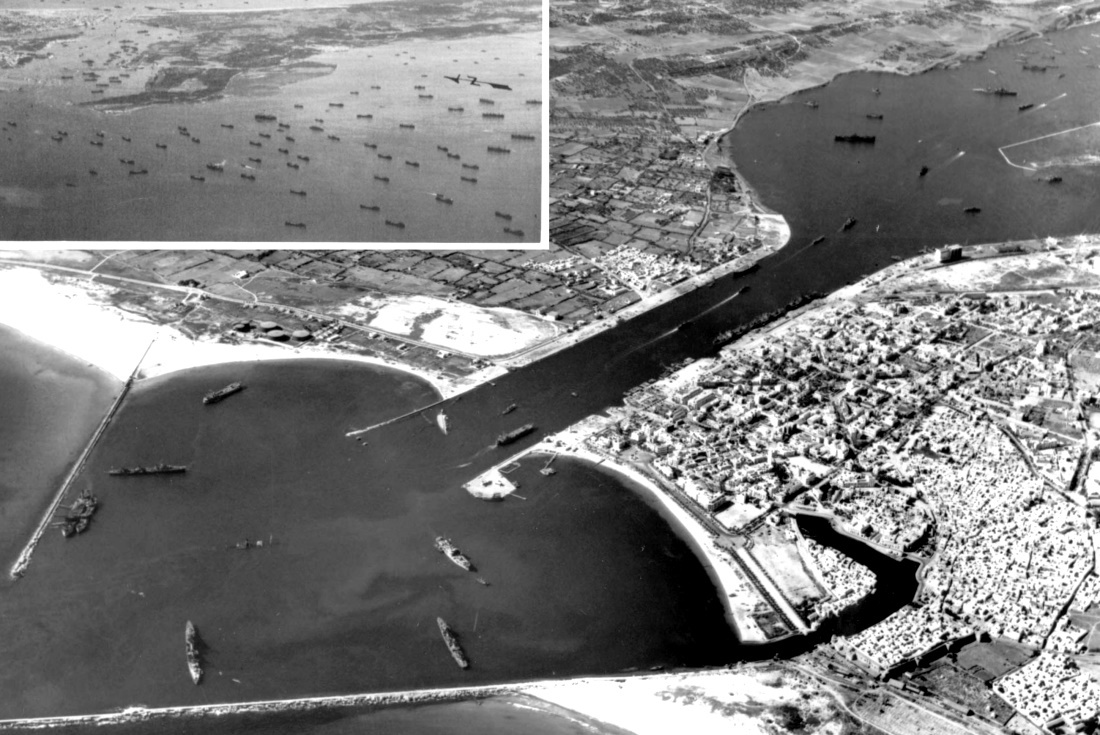 Bizerte, the Main Objective of the French and US forces of II Corps, fell on 7 May. Bizerte’s harbor and the important naval repair facilities at near-by Ferryville were to play important parts in future operations in the Mediterranean. The enemy had blocked the channel to the inner harbor by sinking ships at the entrance and had destroyed most of the port facilities not already wrecked by Allied bombings. The port, however, became operational a few days after capture; ships and supplies were assembled here for the invasion of Sicily. Insert shows some of the ships a few days before that invasion 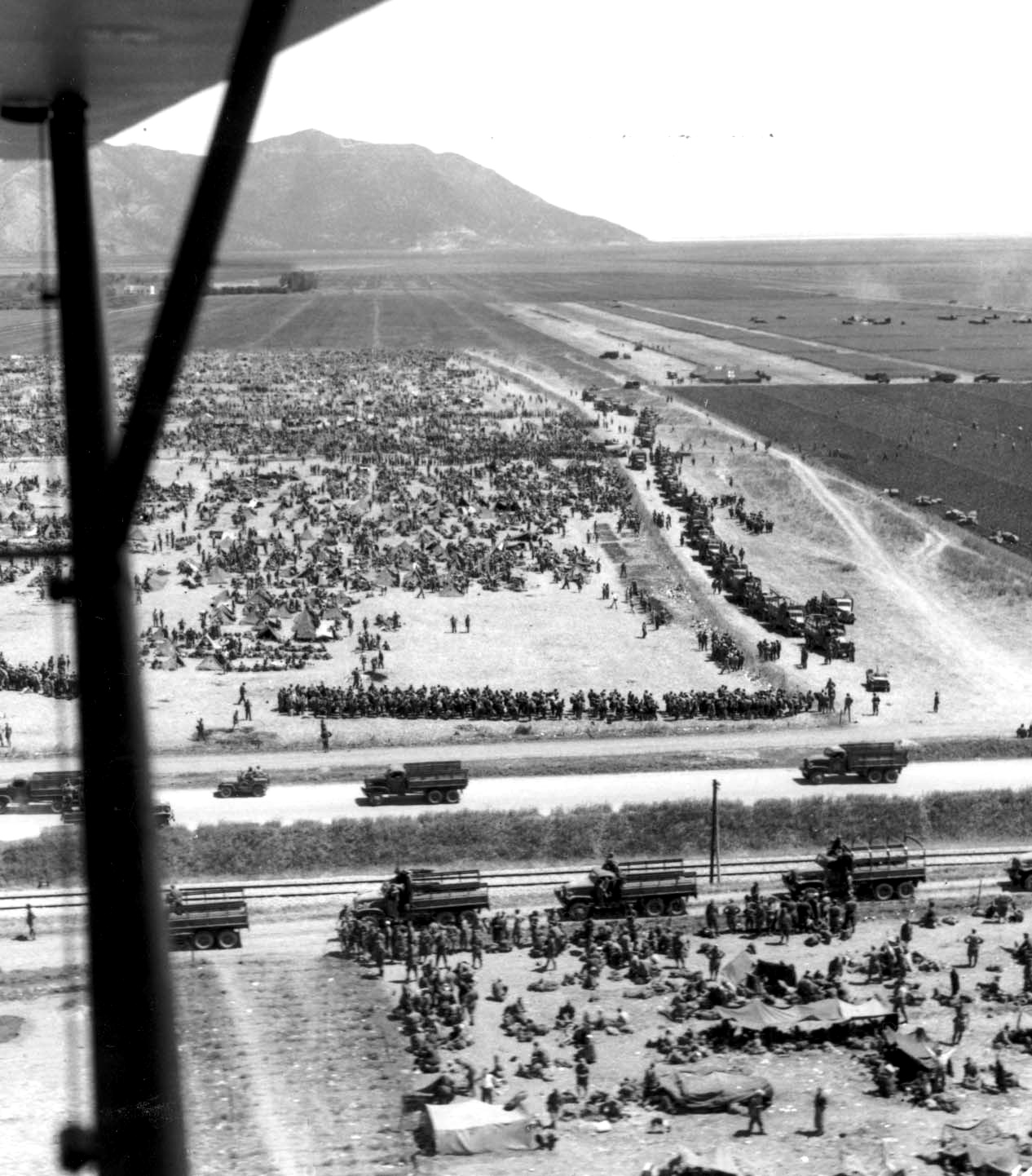 Enemy Prisoners near Mateur. Allied troops took 252.415 prisoners, together with large quantities of equipment and supplies, when the enemy surrendered in Tunisia on May 13, 1943. Because of Allied air and naval superiority the enemy was unable to evacuate his troops. Of those captured, the Germans were among the finest and best trained troops the enemy had and he could ill afford to lose them. 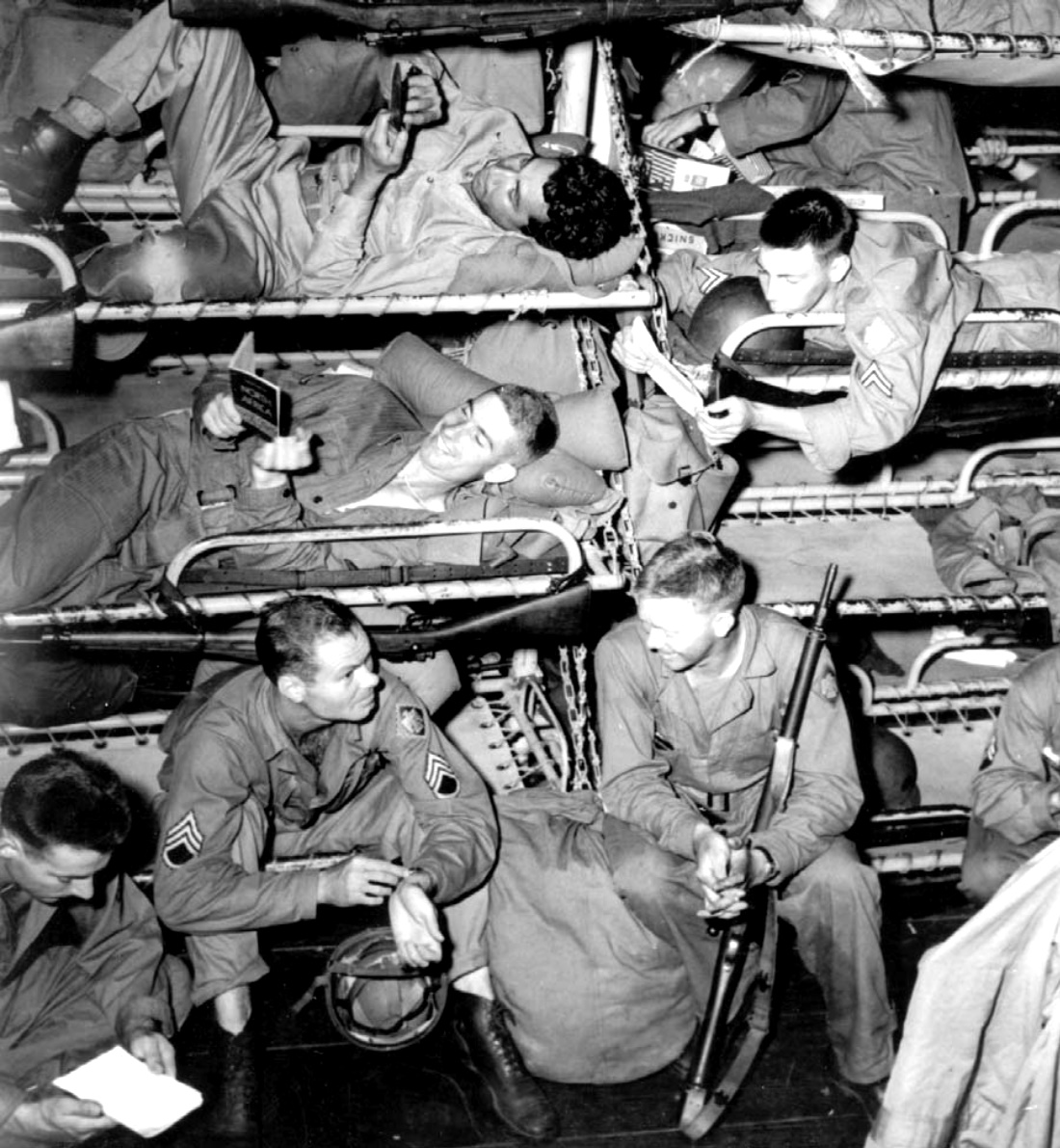 Troop Quarters in the Hold of a Transport. After the fall of French Morocco and Algeria and while the fighting in Tunisia continued, men and supplies poured into the Mediterranean for use in Tunisia and in the assaults on Sicily and Italy. Bunks were placed in tiers everywhere possible in the transports. The convoy traveled blacked out, with port holes closed. Because of the overcrowded conditions, seasickness was practically universal during the first few days out of port. The men spent as much time as possible on deck.