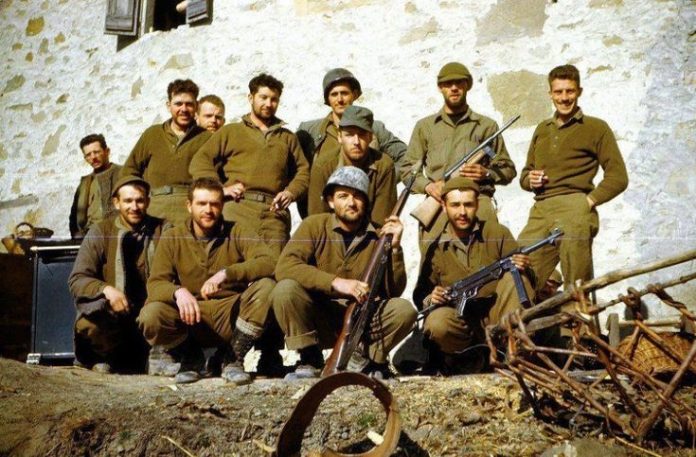 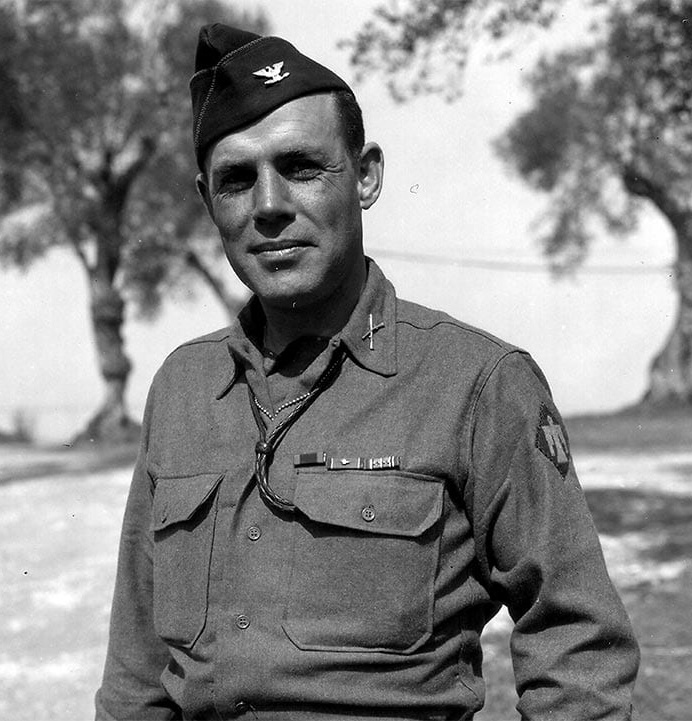 Col William Orlando Darby (Feb 8, 1911 – Apr 30, 1945) was an US Army officer who fought during WW-2 and was killed in action in Italy. He was posthumously promoted to brigadier general. Darby’s first assignment was as assistant executive and supply officer with the 82nd Field Artillery at Fort Bliss, Texas. In July 1934, he transferred to Cloudcroft, New Mexico, where he commanded the 1st Cavalry Division detachment. He received intensive artillery training from September 1937 to June 1938 while attending Field Artillery School at Fort Sill, Oklahoma.
On Sep 9, 1940, he was promoted to captain and subsequently served with the 80th Division at Camp Jackson, South Carolina; Fort Benning, Georgia; Camp Beauregard, Louisiana and Fort Des Moines, Iowa. While WW-2 progressed, Darby saw rapid promotion to the grade of lieutenant colonel. He was with the first US troops sent to Northern Ireland after the US entry into war and during his stay there, he became interested in the British Commandos.

On Jun 19, 1942, the 1st Ranger Battalion was activated and began training in Carrickfergus, Northern Ireland. When the US Army decided to establish its Ranger units, Darby gained the desired assignment to direct their organization and training. Many of the original Rangers were volunteers from the Red Bull Division (34th Infantry Division), a National Guard Division and the first ground combat troops to arrive in Europe. Darby’s Rangers trained with their British counterparts in Scotland. In 1943, the 1st Ranger Battalion made its first assault at Arzew, North Africa.

Darby was awarded the Distinguished Service Cross for his actions on March 21–25 during Operation Torch. The citation stated: Col Darby struck with his force with complete surprise at dawn in the rear of a strongly fortified enemy position. Always conspicuously at the head of his troops, he personally led assaults against the enemy line in the face of 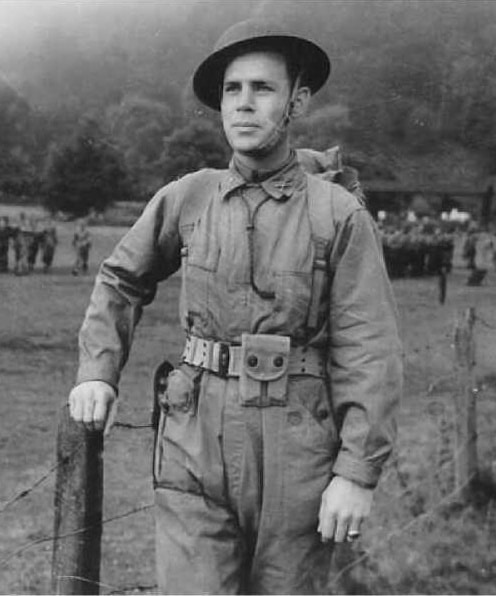 heavy machine-gun and artillery fire, establishing the fury of the Ranger attack by his skillful employment of hand grenades in close-quarter fighting. On Mar 22, Col Darby directed his battalion in advance on Bon Hamedan, capturing prisoners and destroying a battery of self-propelled artillery.. The 1st Ranger Battalion saw further action in the Italian Campaign. Darby received a second award (oak leaf cluster) of the DSC for extraordinary heroism in July 1943, in Sicily: Lt Col Darby, with the use of one 37-MM gun, which he personally manned, managed not only to repulse an enemy attack but succeeded with this weapon in destroying one tank, while two others were accounted for by well-directed hand grenade fire.

Darby was also awarded the Silver Star for his actions in North Africa on Feb 12, 1943: without regard for his personal safety, the day previous to a raid, he reconnoitered enemy positions and planned the attack which he led the following morning. The thorough organization and successful attack led by Col Darby revealed his initiative, courage, and devotion to duty which is a credit to the Armed Forces of the United States.

Darby took part in the Allied invasion of Italy in Sep 1943 and was promoted to full colonel on Dec 11, 1943. He commanded the 179-ID (45-ID) during the Rome-Arno and Anzio campaigns from Feb 18 to Apr 2, 1944. He was then ordered to Washington DC for duty with the Army Ground Forces and later with the War Department General Staff at The Pentagon. In Mar 1945, he returned to Italy for an observation tour with Gen Henry H. Arnold.

On Apr 23, 1945, Gen Robinson E. Duff, ADC (Assistant Division Commander) of the US 10th Mountain Division, was wounded; Darby took over for Duff. Task Force Darby spearheaded the breakout of the American 5-A from the Po River valley bridgehead during the Spring of 1945 offensive and reached Torbole at the head of Lake Garda. On Apr 30, while Darby was issuing orders for the attack on Trento to cut off a German retreat, an artillery shell burst in the middle of the assembled officers and NCOs, killing Darby, a sergeant, and wounding several others. 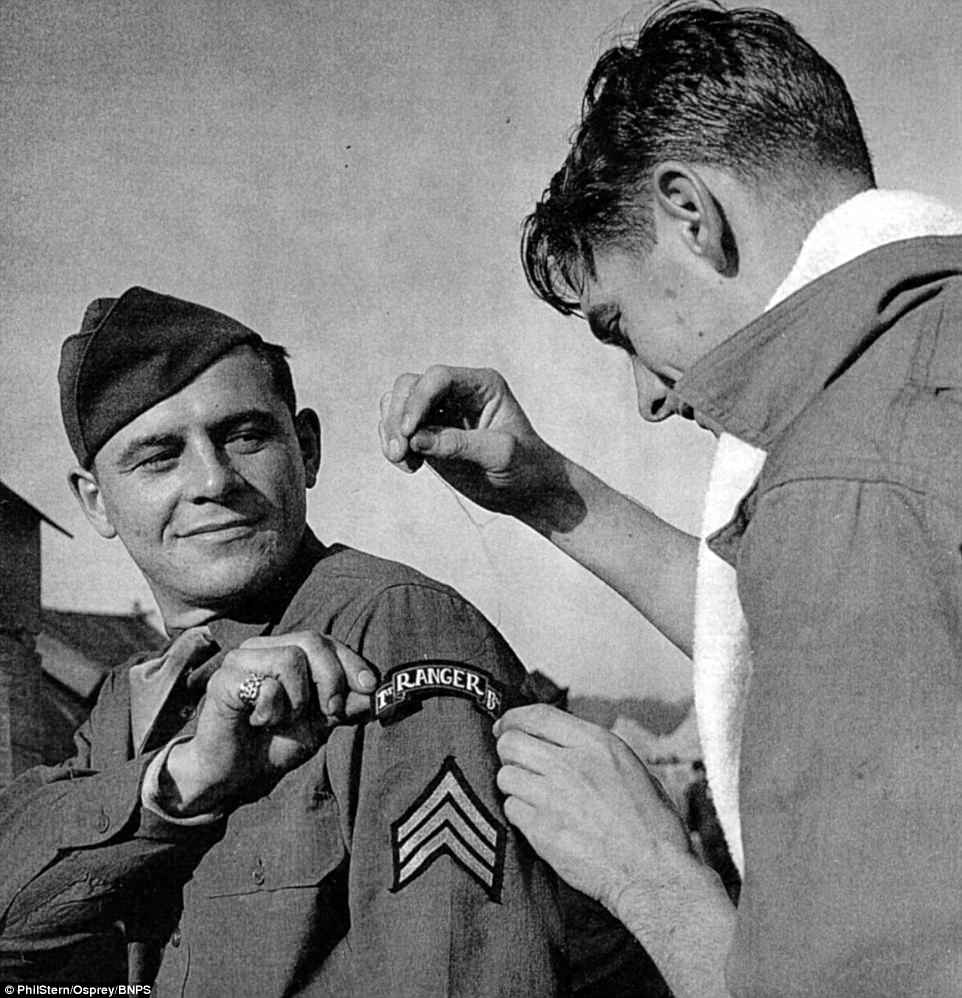 Task Force Darby continued with their mission. Two days later, on May 2, all German forces in Italy surrendered. William O. Darby, aged 34 at the time of his death, was posthumously promoted to brigadier general on May 15. He was buried in Cisterna, Italy, and later re-interred at Fort Smith National Cemetery, Fort Smith, Arkansas on March 11, 1949.

The 1-RB went into action as a unit for the first time on Nov 8, 1942, Operation Torch, the landings into French Morrocco, North Africa. The Rangers made a surprise night landing in and north of Arzew in Algeria neutralized its main coastal defenses and captured its docks. Due largely to rigorous training and thorough planning, they accomplished their mission with the loss of only one Ranger life (Subject letter ‘Commando Organization’ from Gen James W. Chaney to CG-USANIF, June 1, 1942).

Before and after Arzew, however, the Rangers began to evolve from a lightly armed unit organized to conduct special operations into a more heavily armed force organized for conventional combat. This was the result of two tendencies that reinforced one another throughout the existence of Darby’s Rangers.

The first tendency was the adoption of heavier weapons than were specified in the Rangers’ original Table of Equipment (TOE) because of the occasional need for more firepower. 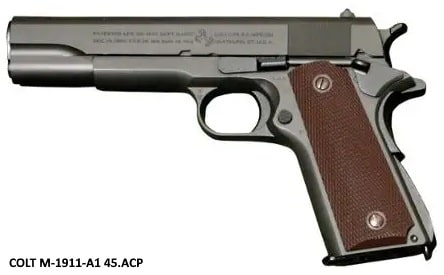 Col Darby accommodated this evolution. He had been commissioned into the field artillery when he graduated from West Point in 1933 and had served only with artillery units until he became Hartle’s aide-de-camp in January 1942. After he took command of the 1st Ranger Battalion, he retained such a strong, appreciation of artillery that the battalion executive officer, Maj Herman Dammer, would later say that Darby had a fetish for firepower. The transition began during the planning for Operation Torch when Darby temporarily replaced the battalion’s 60-MM mortars with 81-MM tubes because he believed the latter would be more effective against the fortified positions that guarded Arzew. It proved to be a wise decision, as the French defenders of the ‘Batterie Superieure’, one of Arzew’s major forts, resisted, and it was necessary for the Rangers to use the mortars against it.

Although the Rangers accomplished their mission quickly and smoothly, troops advancing inland did not have the advantage of surprise and encountered more determined French resistance, Gen Terry Allen, CG of the 1-ID, to which the 1-RB was attached, called upon the battalion to assist in conventional operations. During Nov 9 and Nov 10, Easy Co and elements of the 16-IR (1-ID) captured the town of La Macta (Sidi Bel Abbès), and on Nov 10, Charlie Co helped the 18-IR (1-ID) to take Saint Cloud.

Three Rangers were killed in the fight for the latter town. The use of the Rangers in conventional infantry operations only fourteen and one-half hours after they had set foot in North Africa bothered some of the men. What was the purpose in organizing and training Rangers for Commando-type operations if they are going to be frittered away in mass battles, thought Ranger James Altieri. Dammer, however, sensed no resentment by Darby over the La Macta and Saint Cloud battles. He seemed to believe that there had been a job to do and that the Rangers had done it. The Rangers were not used in combat for almost three months following Arzew but trained near the city and were then assigned to Gen Mark Wayne Clark’s Fifth Army Invasion Training Center (ITC) as a demonstration and experimental troops. Many men transferred out of the battalion during this period, believing that the war was passing them by and Darby found it necessary to recruit new volunteers. On Jan 31, 1943, 7 officer and 101 enlisted replacements reported for duty and were formed into a seventh company that Darby had established for training purposes. No longer attached to the British, the Rangers now had to train themselves.