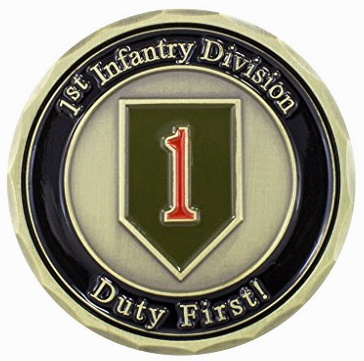 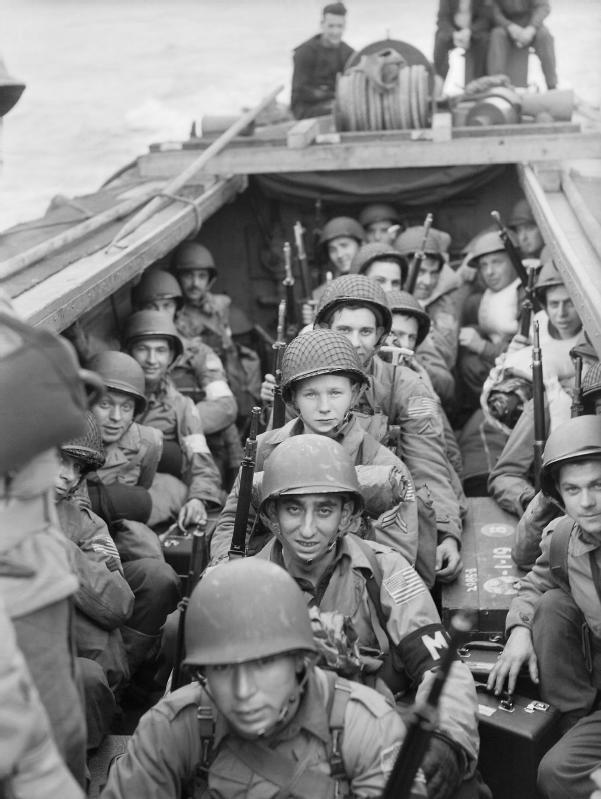 (Document Source) The following archive is the G-3 report of the participation of the 1st Infantry Division in Operation Torch, French Morrocco, North Africa, Nov 8, 1942. It is submitted in compliance with AR 345-105.

On Sept 4, 1942, the 1-ID was given the mission of landing on beach Z and beach Y at 0100, Nov 8, capture the cities of Arzew and Oran as well as the port facilities therein also to seize certain Axis agents and sympathizers.

An advance command post of the 1-ID was set up at the Norfolk House, London, to plan the operation in conjunction with the British Navy, the US II Corps, and the Allied Forces HQs. Planning for the operation and preparation of the initial field order was completed on Oct 15, at which time the London CP was closed. The Division HQ was then established aboard the Reina del Pacifico on Oct 16, with an alternate headquarters aboard the Warwick Castle. The Combat Teams were then moved from Tidworth Barracks, England, to the Glasgow area in Scotland for special training (amphibious). The 18-CT closing in about Sept 10, the 26-CT Sept 18, and the 16-CT Sept 22.
Movements of equipment to Ports of Embarkation was begun on Oct 7, and of personnel, on Oct 12. By Oct 16, all the personnel was loaded on personnel ships to be used for the operation. Landing exercise in practice for the actual operation was held on Sept 18-19. On completion of the exercise, personnel ships returned to the Clyde to finish the loading of supplies.

The Division was embarked on eleven personal-ships and nine cargo vessels and sailed from the Clyde on Oct 26, with a British naval escort. The voyage was without incident. The convoy remained in the Atlantic Ocean until Nov 6, passing through the Strait of Gibraltar after dark that date. The Division reached its destination at 1145, Nov 7, at which time debarkation into landing boats began. 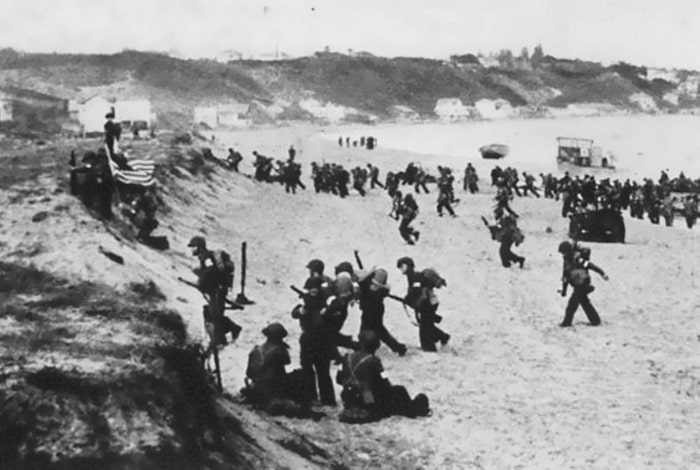 Combat Team 16 landing on Z-White beach at 0105-Z without serious initial opposition. The 1/16 (reinforced) on the left, cleared Z-Red beach for the landing of CCB (1-AD), and moved to La Macta capturing the latter against some opposition. One company occupied Port aux Poules, one company En Nekala, and the battalion (less 2 companies) La Macta.
The 3/16 (reinforced) on the right, advanced to St Eloi – Fleurus by dawn against slight opposition.

The 18-CT landed on Z-Green beach at 0057-Z without serious initial opposition. The 3/18 (reinforced) on the right, advanced north into Arzew against opposition and completed the occupation of the town by 0840-Z. Resistance at Arzew entailed some delay in the landing of subsequent waves because transports could not move to the close-in anchorages at an early hour.
The 1/18 (reinforced) advanced to the vicinity of St Cloud where it was halted by heavy opposition. The 2/18 (reinforced) followed 1/18. 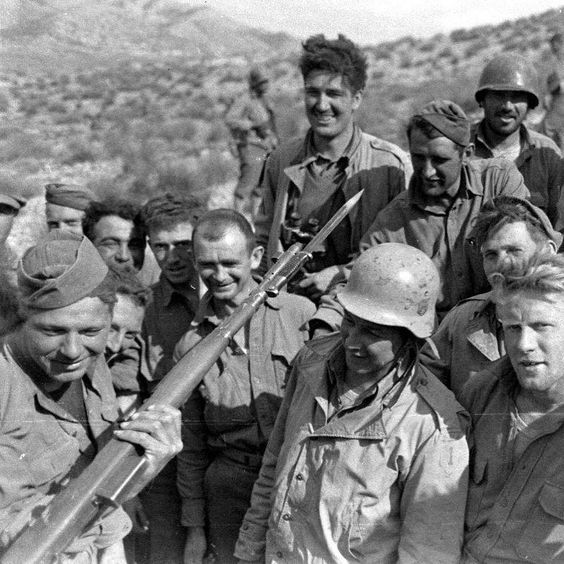 The 1-RB, attached to 1-ID, landed at Arzew with 2 companies and about 2 miles north thereof with the remainder of the battalion and captured the sea-coast defense at the Fort de la Pointe and the North Battery by 0159-Z. The 26-CT landed at Y beach at 0120-Z without opposition. The 3/26 (reinforced) advanced to Djebel Murdjadjo encountering initial resistance at 0630-Z in the vicinity of the Ste Maria Farm where it was halted. The 2/26 (reinforced) advance to Ain El Turk where it was held up by the enemy fire. George Co moved to El Ancor to protect the rear of the Combat Team. The 1/26 (reinforced) in reserve, followed the 2/26. Charlie Co was sent to reinforce the 2/26 before Ain El Turk. The Division CP opened at Tourville at 0745-Z.

November 9, 1942
In the 16-CT sector, the 1/16, was counter-attacked from the east and the south. At one-time enemy troops penetrated between Port aux Poules and La Macta. This battalion was reinforced by 1/19-ECB (Engineers) and one company 1-RB (Rangers) and the counterattack was definitely repulsed by noon with the bridgehead at La Macta reestablished. Thereafter the situation at La Macta remained stabilized. The 3/16 advanced via Fleurus – Assi Ameur – Assi Ben Okba thence northwest to the southern slopes of Djebel Khar. The 2/16 advanced on Oran via Fleurus – Assi Ameur – Assi Bou Nif to about 3 miles west of the latter against enemy opposition. The 1/16 was relieved at La Macta by the 19-ECB (Engineers) and moved to Fleurus.
In the 18-CT sector, during the morning hours, the Combat team assisted by King Co (16-CT) and a section of the 1st Recon Troop attacking north from Fleurus, continued the attack on St Cloud. Forward elements entered the village but were unable to quickly mop up snipers. Orders were issued to contain St Cloud with the 1/18 and bypass the other two battalions for the continuation of the mission to drive on Oran. St Cloud was contained by the 1/18, with one company of the 1-RB attached. The 2/18 and the 3/18 by-passed St Cloud to the south and north respectively and the 2/18 followed by the 3/18 reached a point about 3 miles east of Arcole by nightfall. 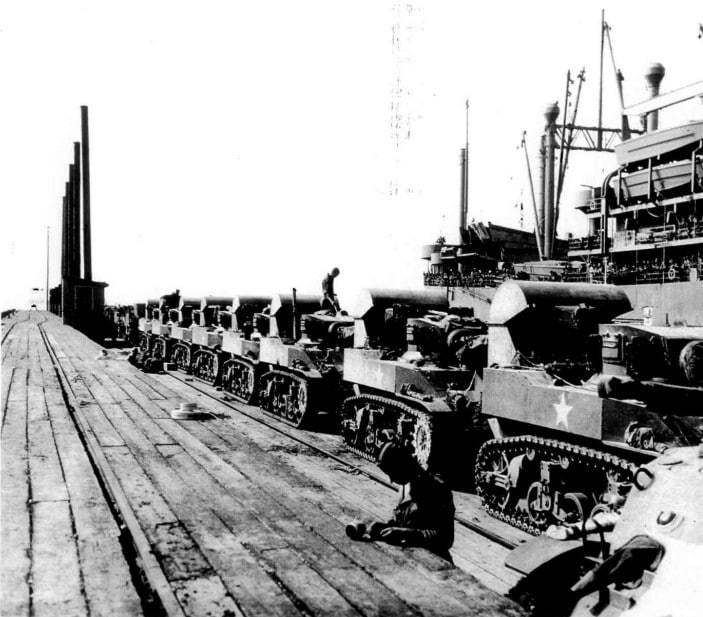 In the 26-CT sector, the 2/26 attacked Ain El Turck successfully and organized the town. The 3/26 unsuccessfully attacked the Ste Maria Farm. Late in the day, the 1/26 advanced to support the 3/26. On the same day, the Division Command Post opened at Renan at 0821-Z, and the 1-RB, less two companies, organized Arzew.

November 10, 1942
In the 18-CT sector, the 1/18 continued to contain St Cloud, while the remainders of the Combat Team continued to advance and entered in the outskirts of Oran at 1000-Z, the city itself at 1200-Z by 2/18. The 3/18 entered Oran, after capturing the Canestel Battery, at 1305-Z. In the 16-CT sector, the 1/16 and the 2/16 abreast followed by the 3/16 advanced against lessening resistance, the leading elements entering Oran at 0830-Z, the city was occupied by 1300-Z. In the 26-CT sector, the Combat Team successfully attacked the Ste Maria Fram, advanced to the east, and occupied the heights of Djebel Murdjadjo dominating Oran. The Division Command Post established at Fleurus at 0335-Z, at Assi Bou Nif at 0810-Z, and at the St Jean Baptiste Farm at 1150-Z.

Field Orders & Reorganization
The organization of the Oran area was begun immediately upon the fall of the city and completed on November 15. The 1-ECB secured the dock areas after the occupation of Oran and policed the dock areas until November 14.
Casualties. The Division suffered the following casualties during the operation: Dead, 9 off 85 EM; Seriously wounded 4 off 69 EM; Slightly wounded 10 off 168 EM; Missing in action 7 EM and Missing 66 EM.