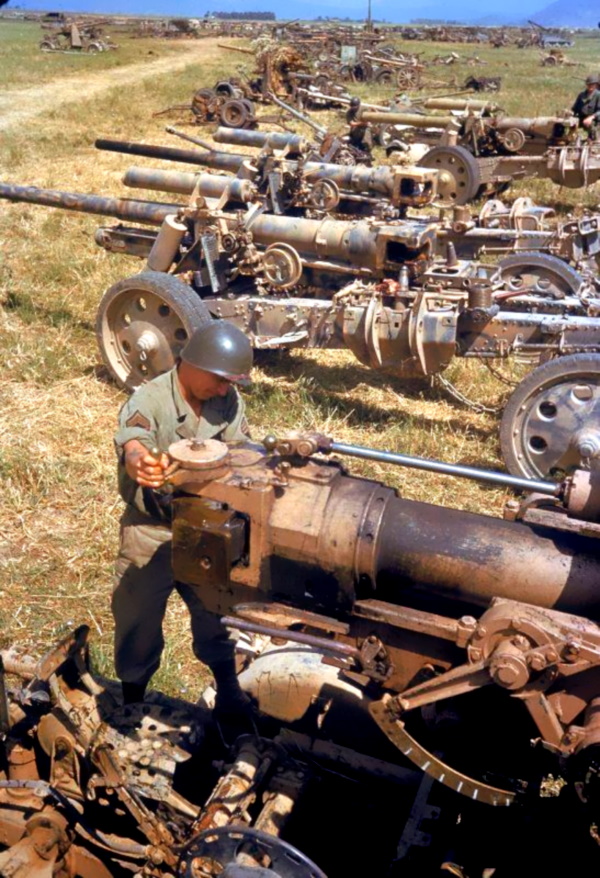 During WW-2, the photographers of the US Army, USAAF, USN, USMC, and USMC created on film a pictorial record of immeasurable value. Thousands of their pictures are preserved in the photographic libraries of the armed services, little seen by the public. In the volumes of the US Army in WW-2 now being prepared by the Office of the Chief of Military History, Department of the Army, it is possible to include only a limited number of pictures. A subseries of pictorial volumes, of which this is one, has been planned to supplement the other volumes of the series.

The photographs have been selected to show important terrain features, types of equipment and weapons, living and weather conditions, military operations, and various matters of human interest. These volumes will preserve and make accessible for future reference some of the best pictures of WW-2. An appreciation not only of the terrain on which actions were fought but of its influence on the capabilities and limitations of weapons, in the hands of both our troops and the enemy, can be gained through a careful study of the pictures herein presented. Appreciation of these factors is essential to a clear understanding of military history.

This volume, compiled by Lt Col John C. Hatlem, USAF, and Capt Kenneth E. Hunter, with the assistance of Miss Margaret E. Tackley, and edited by W. Brooks Phillips and Miss Mary Ann Bacon, deals with the Mediterranean Theater of Operations and the Middle East. It is divided into five sections:

The written text has been kept to a minimum. Each section is preceded by a brief introduction recounting the major events set down in detail in the individual narrative volumes of the US Army in WW-2. 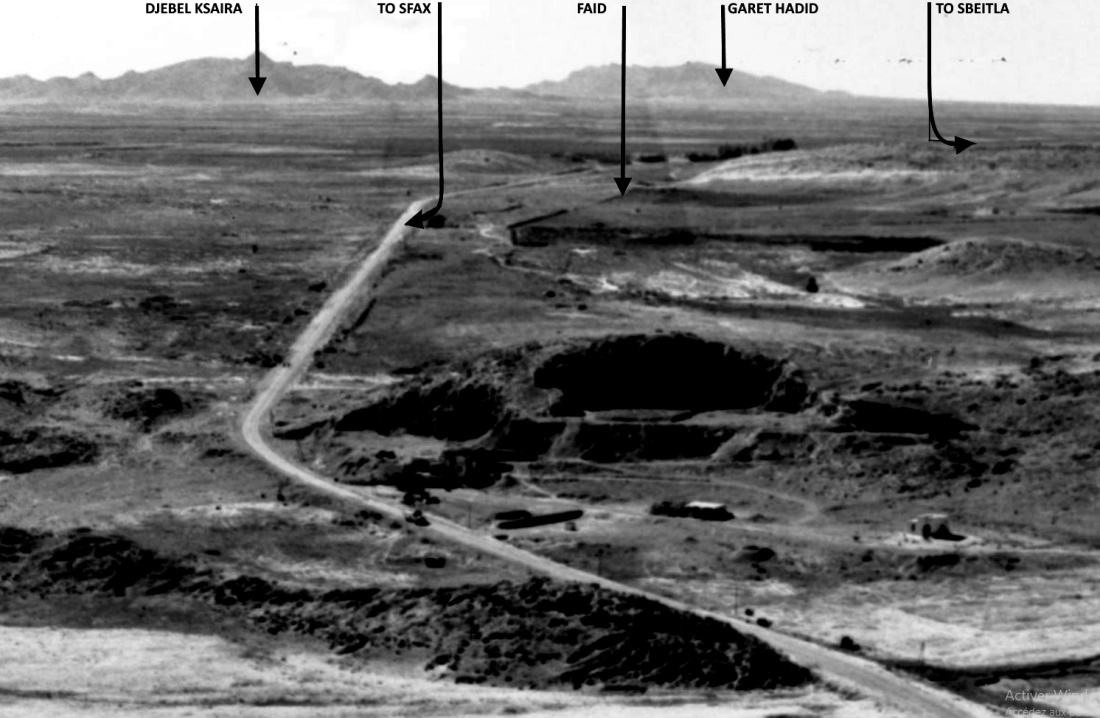 Faïd Pass. This opening in the eastern mountain chain was taken from a weak French garrison and held against US and French counterattacks, January 30 – February 2, 1943. Just before daylight, February 14, very strong German forces came through Faïd Pass and others came from south of the pass to drive the Americans from positions to the west. The enemy cut off and isolated three groups, on Djebel Ksaira and Garet Hadid southwest of the pass, and Djebel Lessouda northwest of it. On February 15, an American armored counterattack to relieve the troops was made in strength far inferior to that required. Most of the troops were captured trying to escape. On February 17, the American base at Sbeitla and the airfields at Thelepte were evacuated, as all troops were pulled back into the western mountain chain. The enemy then decided to continue his attack toward the northwest

(Above and Below) General Grant Tank. These medium tanks were of the riveted hull type, later models having cast or welded armor, and were equipped with either a short-barreled (top) or long-barreled (bottom) 75-MM gun. The principal armament was the 75-MM cannon, in a right-hand sponson, capable of being swung in an arc of about 30 degrees. The entire tank would often have to be turned to bring the gun to bear. In a hull-down position only the secondary gun, the 37-MM cannon in the turret, could be fired. The silhouette of the M-3 was much higher than that of corresponding German tanks. 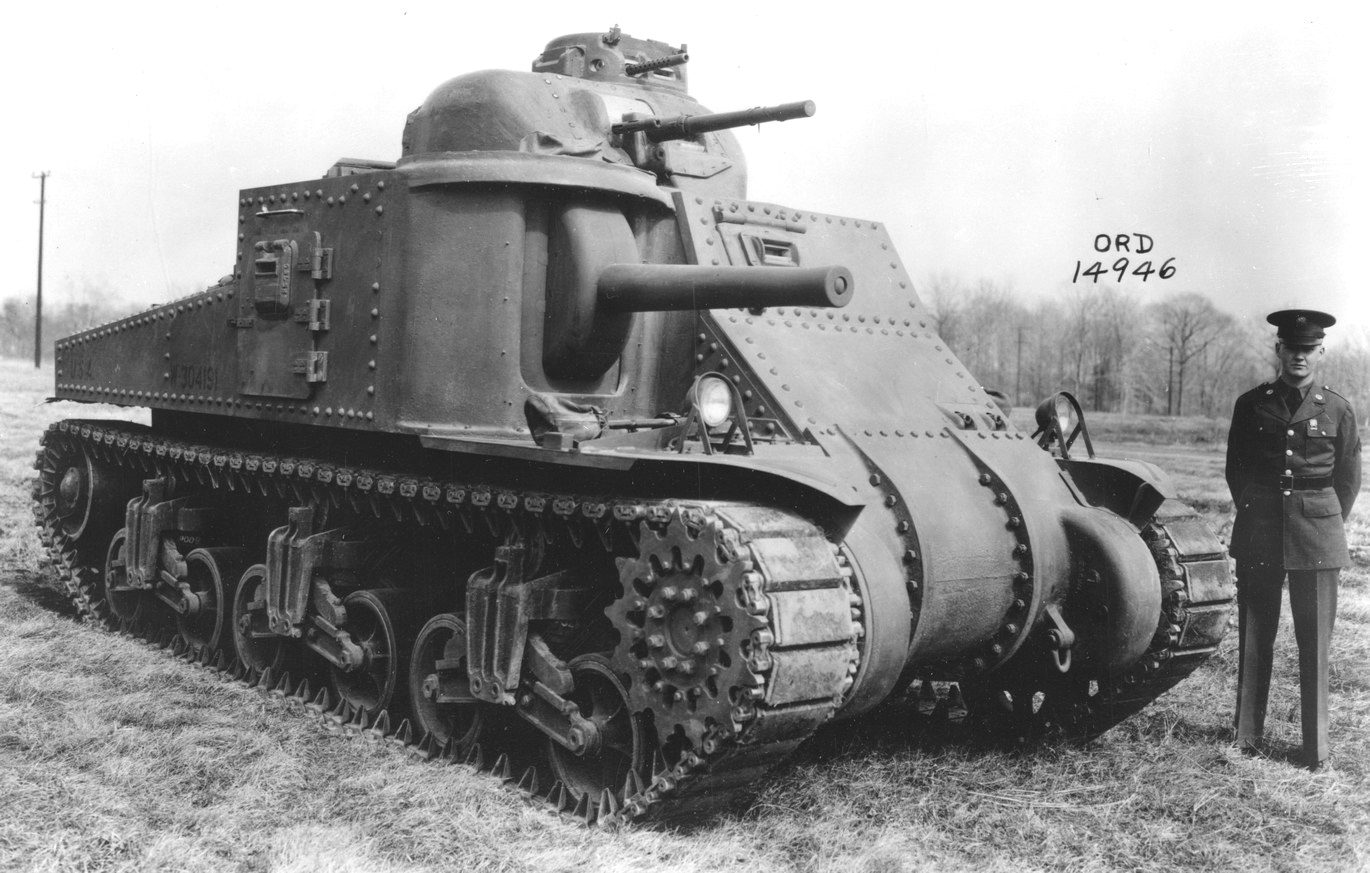 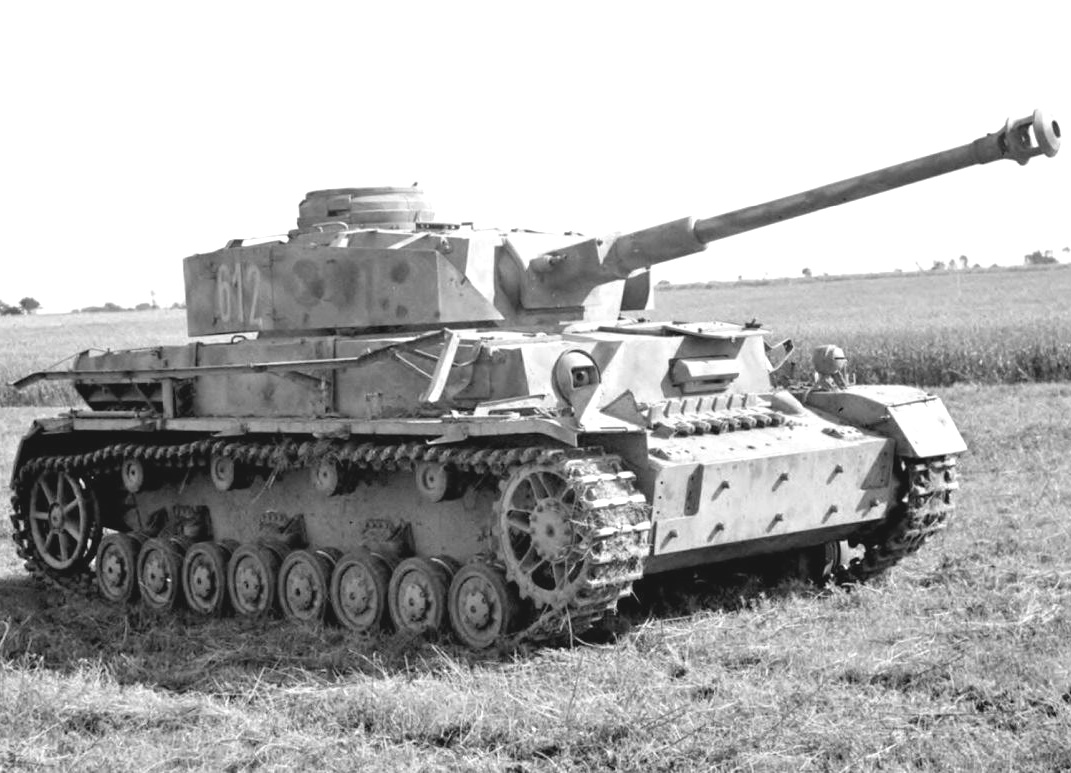 Captured German Armor. The Mark IV medium tank (above) was equipped with a 75-MM cannon of higher velocity and range than any of the Allied tank guns then in use. It was generally superior to Allied tanks and was probably the best tank the enemy had until the Panther made its appearance in Italy, in 1944. The Mark IV was used until the end of the war. The eight-wheeled armored car with a 75-MM howitzer (below) was equipped with quite thin armor which was so well angled that machine gun bullets and small fragments were not effective against it. It could be steered from both ends and had a speed of slightly more than thirty miles an hour. (Mark IV – Pz. Kpfw. IV)(armored vehicle, 7.5-cm. howitzer.) 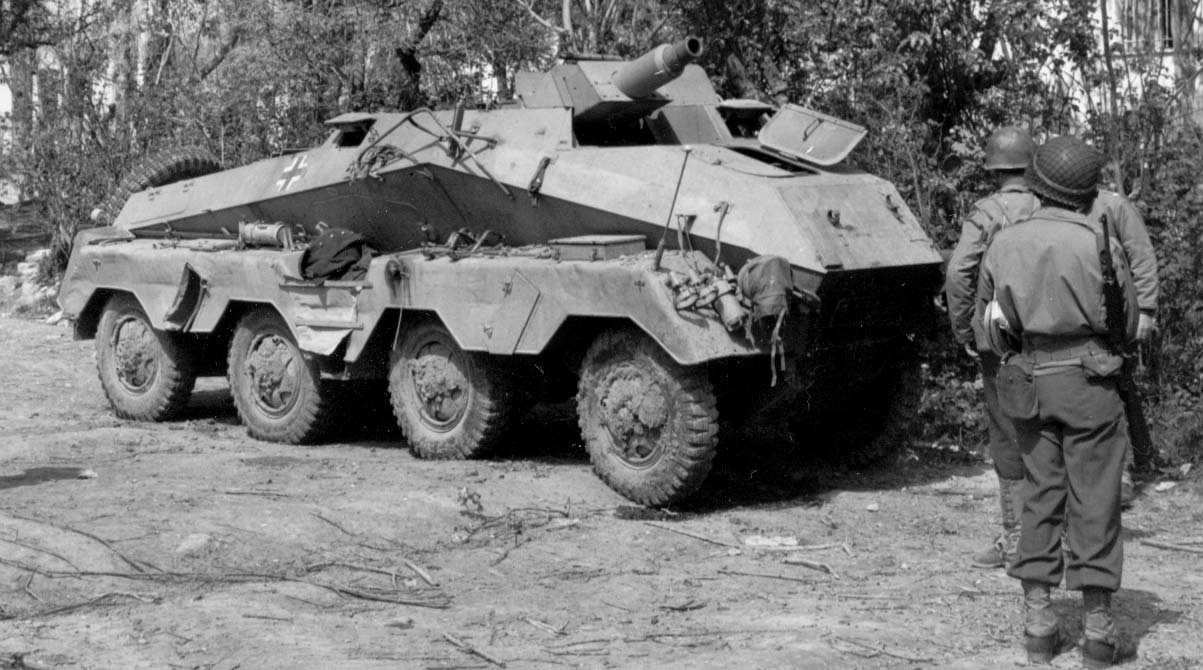 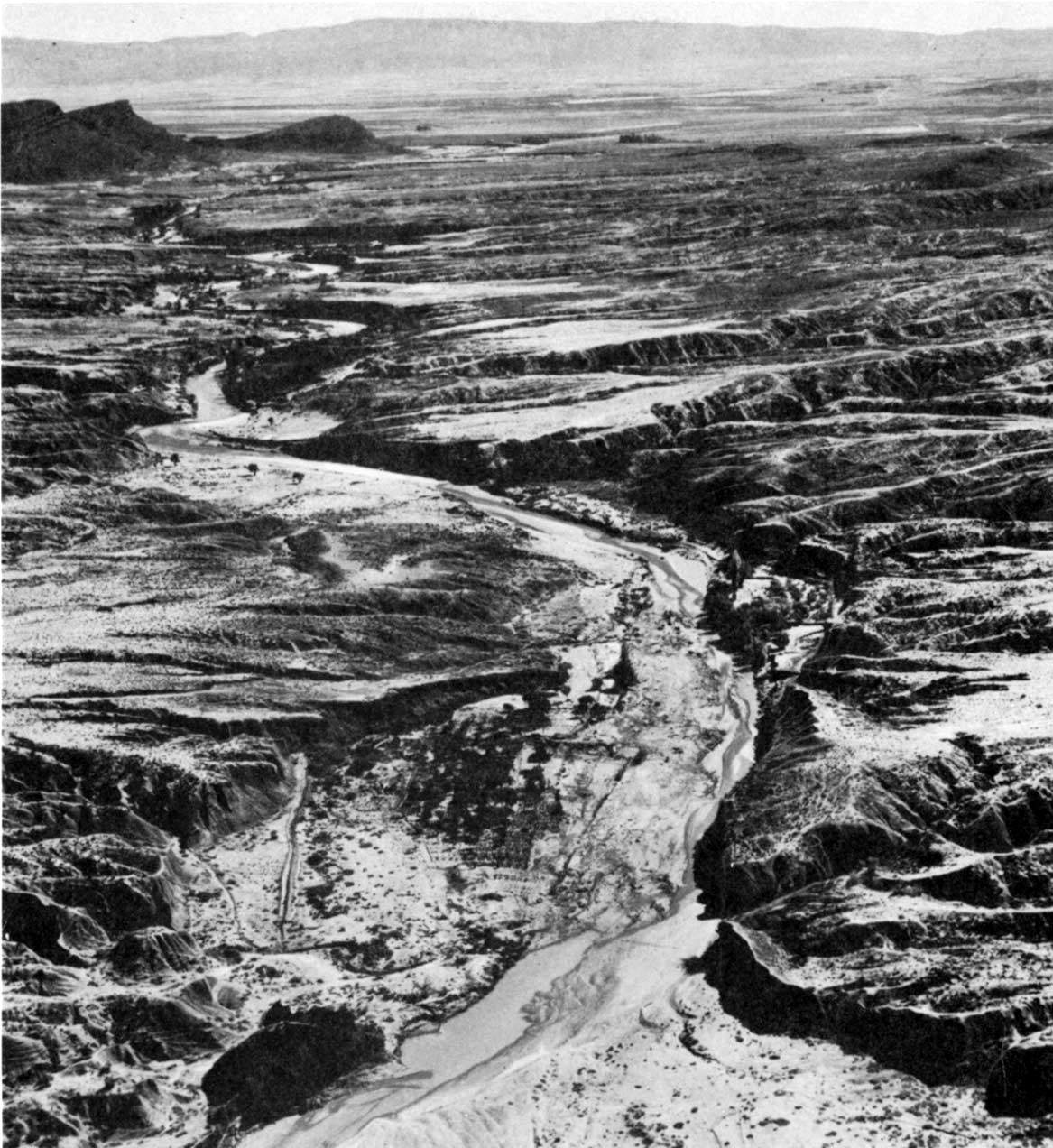 Kasserine Pass Area. The enemy broke out of the pass on February 20, 1943. On the 21st he headed toward Tébessa and Thala. The attack on Tébessa was halted; the main attack toward Thala made some progress. A British armored force, with heavy losses in tanks and men, delayed the enemy until US artillery got into position. On the 22d the enemy pounded the defenses of Tébessa and Thala unsuccessfully. Allied planes attacked the enemy near Thala, and in the evening the Germans started to withdraw. The Kasserine push was the high point of enemy fortunes in Tunisia. 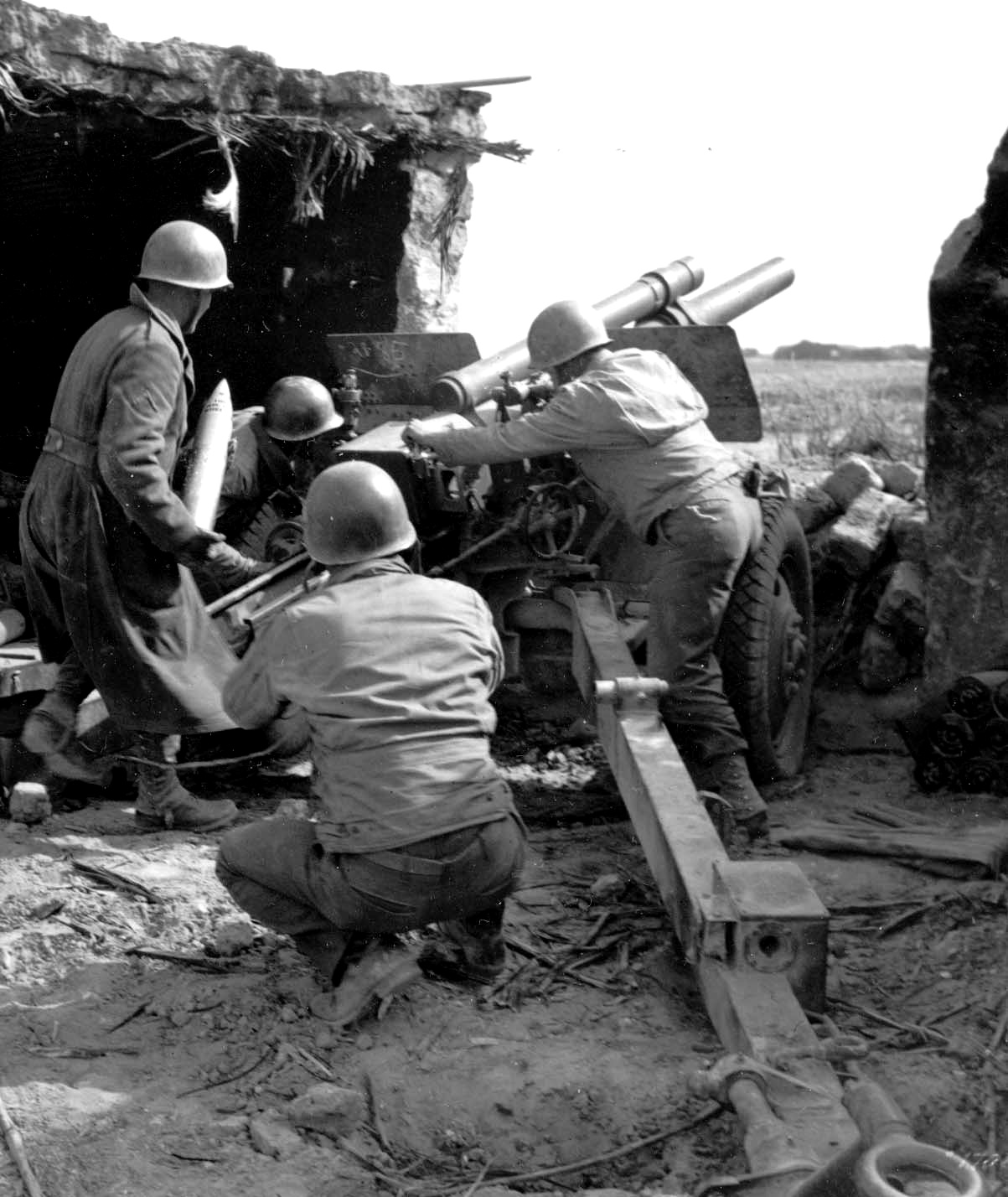 Loading a 105-MM Towed Howitzer. This gun was designed to give close support to the infantry. The picture was made during the February fight in Kasserine Pass (Howitzer M-2 105-MM).

Sherman Tank Towing a Disabled Half-Track at Sidi bou Zid. This tank gradually replaced the M-3 (Grant) in Tunisia. Its principal weapon was the 75-MM cannon. Its turret could traverse an arc of 360 degrees in contrast to the sponson-mounted gun on the General Grant with a traverse of about 30 degrees. 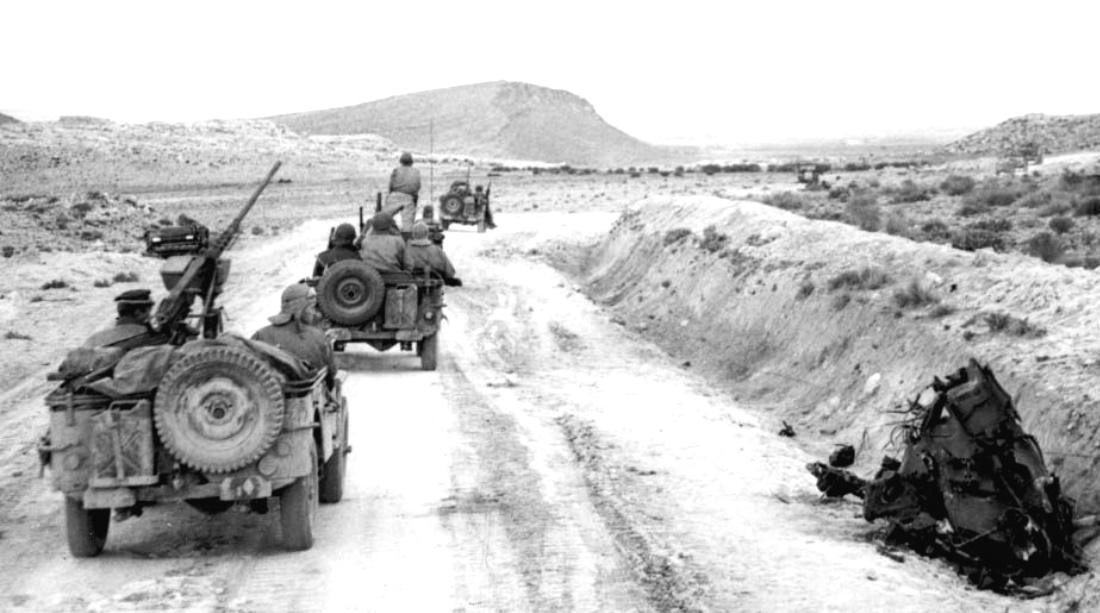 Reconnaissance party at Kasserine Pass on the Kasserine-Thala road (below). The enemy came up this road on his attack through the pass and stopped just before reaching Thala after indications of increasing Allied strength. (Medium tank M4). 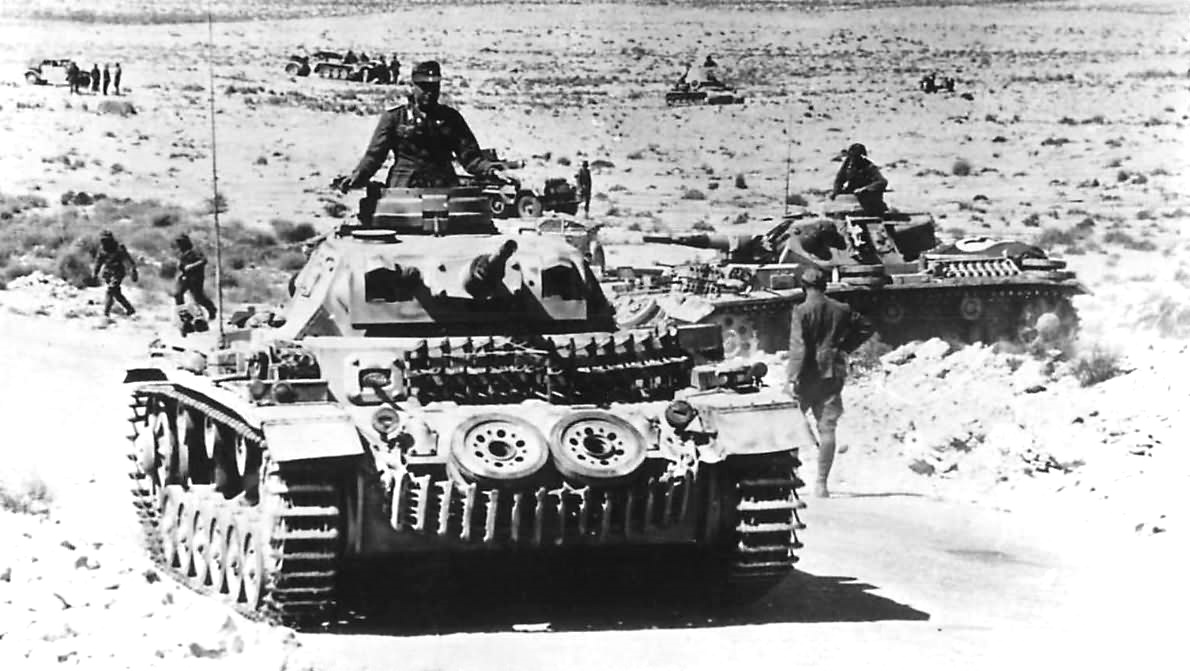 German Armor. The Mark III medium tank (above), the standard German tank in Tunisia, had a high-velocity 50-MM. cannon which could penetrate the frontal armor of US light tanks at a thousand yards and the frontal and side armor of the M-3 Grant at five hundred and one thousand yards respectively. The 75-MM antitank and assault gun Sturmgeschütz III Ausf.G (Sd.Kfz.142/1) (below), mounted on the same chassis as the Mark III tank, was encountered early in the Tunisian Campaign. Its high-velocity gun was more than a match for any of the Allied tanks. Its low silhouette, characteristic of most German armor, made it difficult to detect and hard to hit. The prototypes of both these vehicles existed in Germany in 1936 and were used until the end of the war.
(Additional Info) for the photo below, from my Facebook friend Erwin Verholen. The man on the photo is Lauri Leppänen. He was born March 6, 1923, in Kauhajoki (Finland) and died on July 22, 2015, at the age of 92 years in Vantaa (Finland). Lauri is sitting on a Finnish Army STUG III. 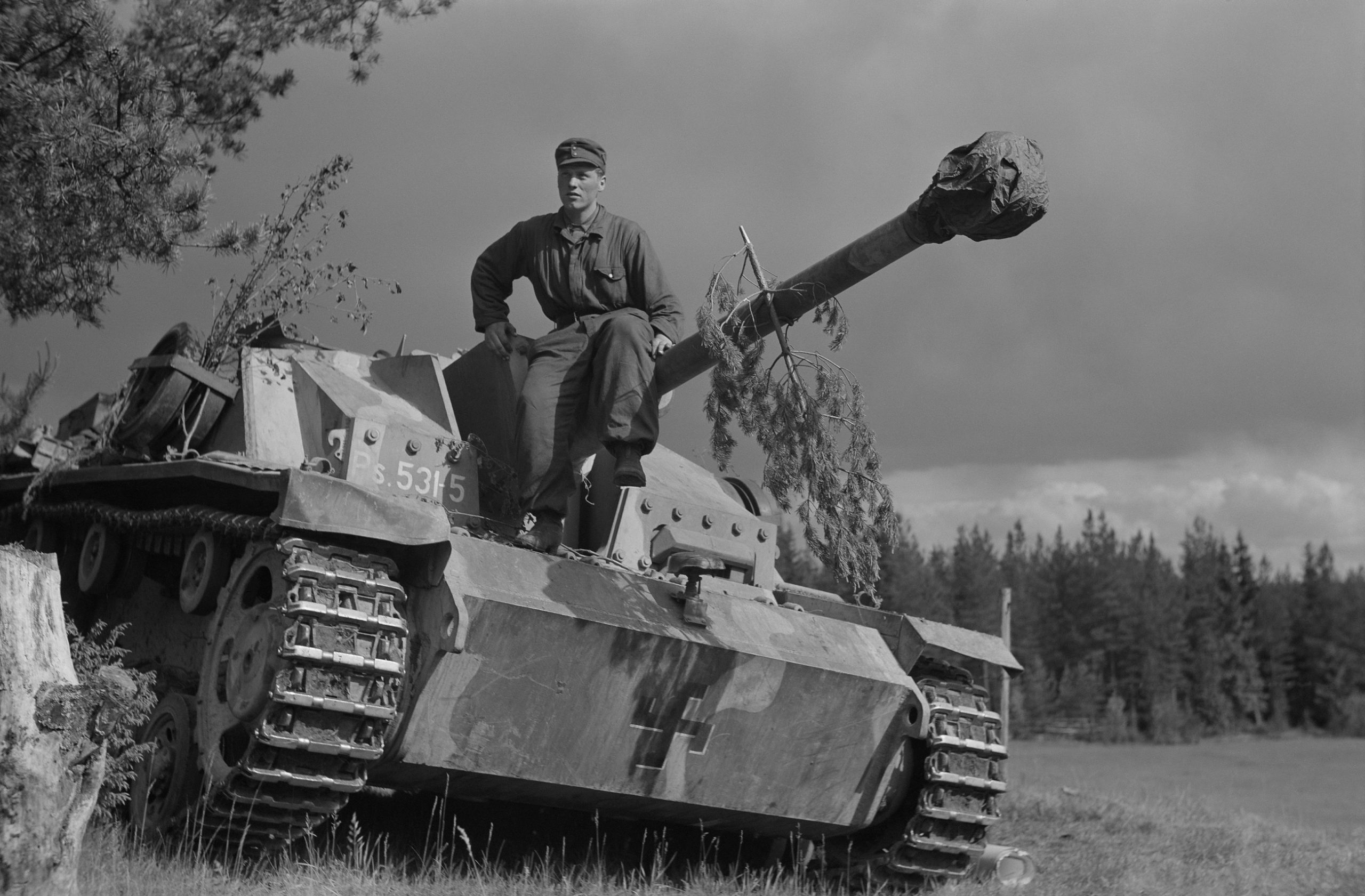 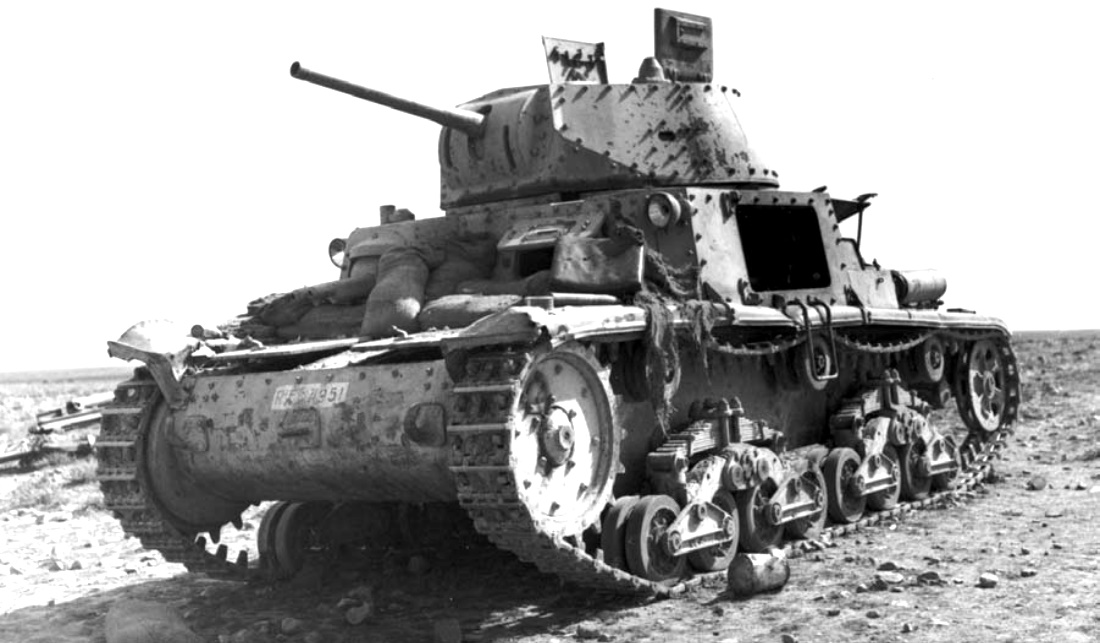 (Above and Below) Italian Medium Tanks Left Behind at the Kasserine Pass. This model was the backbone of the Italian armor in Tunisia. By Allied standards, it was inferior in practically every respect, but it was the best the Italians had. (Italian medium tank M13/40 with 47-MM cannon). 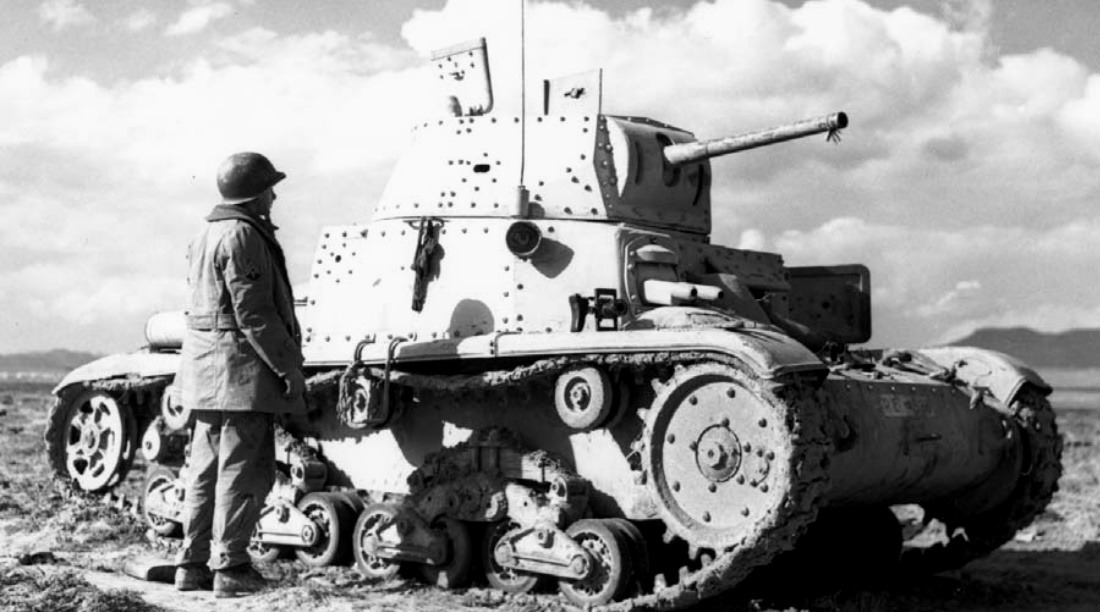