(Document Source) A thesis presented to the Faculty of the US Army Command and General Staff College in partial fulfillment of the requirements for the degree Master of Military Art and Science, Military History, by Maj Nathan K. Watanabe, USA B.S., US Air Force Academy, Colorado, 1988, Fort Leavenworth, Kansas 2002 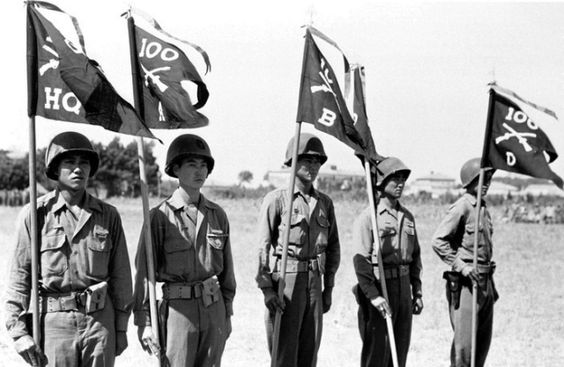 The 442nd Infantry Regiment, later 442nd Regimental Combat Team, was an infantry regiment of the United States Army and was the only infantry formation in the Army Reserve. The regiment is best known for its history as a fighting unit composed almost entirely of second-generation American soldiers of Japanese ancestry (Nisei) who fought in World War II. Beginning in 1944, the regiment fought primarily in the European Theatre, particularly in Italy, southern France, and Germany.

The story of the 442nd Regimental Combat Team (442-RCT) is rooted in the history of the Japanese in Hawaii and America itself. As the second generation of Japanese born abroad, or the first Japanese generation born in Hawaii and America through the early 1910s and 1920s, the Nisei were American citizens and part of the larger greatest generation to be of the right age to face the conflict of World War II. This generation of Japanese born abroad best personifies the blending of American and Japanese cultures that laid the foundation for a resolute, cohesive, and dedicated unit that accomplished every assigned mission without fail.

The 442nd Regiment is the most decorated unit in the US military history. Created as the 442nd Regimental Combat Team when it was activated on February 1, 1943, the unit quickly grew to its fighting complement of 4000 men by April 1943, and an eventual total of about 14.000 men served overall. The unit earned more than 18.000 awards in less than two years, including 9.486 Purple Hearts and 4.000 Bronze Star Medals. The unit was awarded eight Presidential Unit Citations (five earned in one month). Twenty-one of its members were awarded Medals of Honor. In 2010, the Congressional Gold Medal was awarded to the 442nd Regimental Combat Team and associated units who served during World War II, and in 2012, all surviving members were made chevaliers of the French Légion d’Honneur for their actions contributing to the liberation of France and their heroic rescue of the Lost Battalion.

Arriving in the European Theatre, the 442nd Regimental Combat Team, with its three infantry battalions, one artillery battalion, and associated HQ and service companies were attached to the 34th Infantry Division. On 11 June 1944, near Civitavecchia, Italy, the existing 100th Infantry Battalion, another all-Nisei fighting unit which had already been in combat since September 1943, was transferred from the 133rd Infantry Regiment to the 442nd Regimental Combat Team. Because of its combat record, the 100th was allowed to keep its original designation, with the 442nd renaming its 1st Infantry Battalion as its 100th Infantry Battalion. The related 522nd Field Artillery Battalion liberated at least one of the satellite labor camps of Dachau concentration camp and saved survivors of a death march near Waakirchen.

The 442nd saw heavy combat during World War II and was not inactivated until 1946, only to be reactivated as a reserve unit in 1947 and garrisoned at Fort Shafter, Hawaii. The 442nd lives on through the 100th Battalion/442nd Infantry Regiment, which has maintained alignment with the active 25th Infantry Division since a reorganization in 1972. 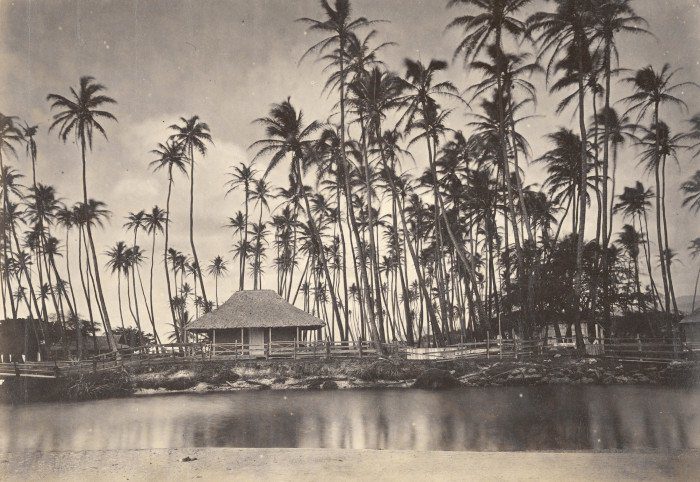 The first known arrival of Japanese to the Kingdom of Hawaii came on May 5 1806, involving survivors of the ill-fated ship Inawaka-maru who had been adrift aboard their disabled ship for more than seventy days. The Inawaka-maru, a small cargo ship built-in 1798 in Osaka, was owned by MansukeMotoya of Kitaniura, Hiroshima, was chartered by the Kikkawa fiefdom in Iwakuni, a district in the present Yamaguchi prefecture, to transport floor mats and horse feed to the residence of the Kikkawalord in Edo (Tokyo today).

The trip began in November 1805. The ship was manned by Capt Niinaya Ginzo, thirty-three years old; Master Ichiko Sadagoro, fifty-three; and four sailors: Hirahara Zenmatsu, thirty-four; Akazaki Matsujiro, thirty-four; Yumori Kasoji, thirty-one, all from Kitaniura; and Wasazo, twenty-seven, from Higashinomura.
The ship departed from Kitaniura, Hiroshima, on November 7, 1805, and took on its designated cargo together with two officials of the Kikkawa fiefdom at Iwakuni. Before leaving for Edo, however, the ship returned to Kitaniura and then headed for Edo on November 27, 1805.

On December 21, 1805, the Inawaka-maru arrived in Shinagawa, a port in Edo. After unloading the cargo headed southward stopping at Kanagawa, Uraga, and Shimoda. On January 6 1806, the vessel departed Shimoda for its final homebound voyage. 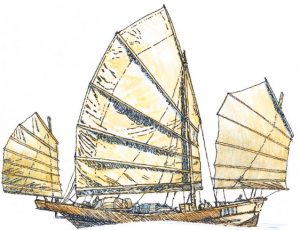 While crossing the Sea of Enshunada near the Shizuoka prefecture, the Inawaka-maru encountered a snowstorm backed by a strong east wind. The snowstorm turned into heavy rain, and the wind became stronger. The ship was soon disabled and was blown toward the Eastern Pacific. On January 7, 1806, due to the increased force of the wind, the crew cut the mast down, and the disabled ship began drifting further eastward. On January 11, two rocky islets were sighted, but a decision was made not to make a landing. The ship continued drifting eastward. The supply of water ran out on January 20. Except for relief during an occasional rainfall, the crew often went without water for four or five days. Rainwater was collected by every means possible. At times they had to quench their thirst by sucking on cloth that contained some moisture.

By February 28, the supplies of rice and water were nearly exhausted. The last dinner was cooked with the last little supply of rice. They all prepared for death, hoping that their ship would take them to their Buddhist paradise. On March 15, a flying fish jumped into the ship. Zenmatsu made a soup with it and shared it with the rest of the crew. They made hand-made hooks and used the innards of the flying fish to catch more fish. In this way, they were able to regain their strength. Some fish were saved by drying. 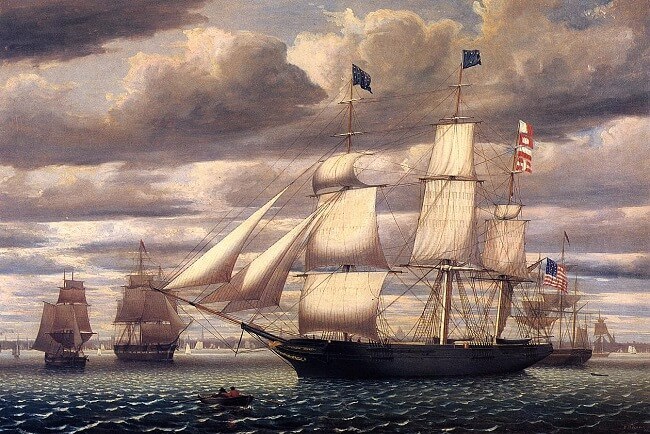 On March 20 1806, a foreign ship appeared. The crew of the Inawaka-maru climbed onto the deckhouse roof and signaled the ship by waving a mat and shouting for help. At first, they seemed not to have been seen, but finally, the ship came closer and lowered her sails. Four foreigners, including one carrying a sword, who seemed to be the captain, came up on deck as the ship circled around the Inawaka-maru.

Upon realizing that the Japanese vessel was disabled, they came aboard. Two sets of Japanese swords that belonged to the two officials from Iwakuni were found in a closet at the stern and were confiscated. The captain asked the Japanese something, but they could not understand English. The Japanese asked for food by putting their hands on their stomachs, pointing to their mouths, and bowing with their hands together.

The captain touched each one’s stomach and took a look around the galley. When he realized that they had no food or water, he took all eight Japanese on board his ship, assisting them by taking their hands and putting his arms around them. Personal belongings of the Japanese were also transferred. The rescuing ship was an American trading vessel, the Tabour, commanded by Captain Cornelius Sole. The Japanese had been rescued after being adrift in the Pacific for more than seventy days. Aboard the Tabour, the Japanese were served a large cup of tea with sugar. 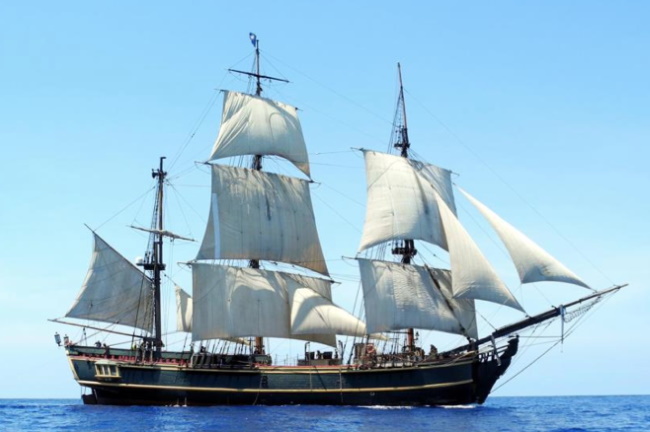 It tasted so good that they asked for more, but the captain did not allow them to eat anything more on that day (remedy for starvation). On the following day, they were given two cups of sweetened tea followed by a serving of gruel. This was repeated for another three days. On the fifth day, when everyone gradually became well, they were served rice for breakfast and dinner and bread for lunch.

The bread, tasted by the Japanese for the first time, was described by Zenmatsu as similar to a Japanese confection called Higashiyama, which is shaped round like across section cut of thick daikon (radish). The Japanese had no words to express their gratitude and they were deeply touched by the kind treatment received from the foreigners.

On May 5 1806, the Tabour arrived in Hawaii and docked in Oahu after forty-five days of sailing following the rescue. Zenmatsu reported being rescued by a foreign ship at 4000 RI (9760 miles) from Hawaii and 1000 RI (2440 miles) from Japan. He also stated that the distance between Japan and Hawaii is 5000 RI (12.200 miles).
Zenmastu was considerably off in his distance estimation as the distance between Japan and Hawaii is 3800 miles. According to Zenmatsu, nearly five hundred men and women onlookers gathered around them when they disembarked from the ship. 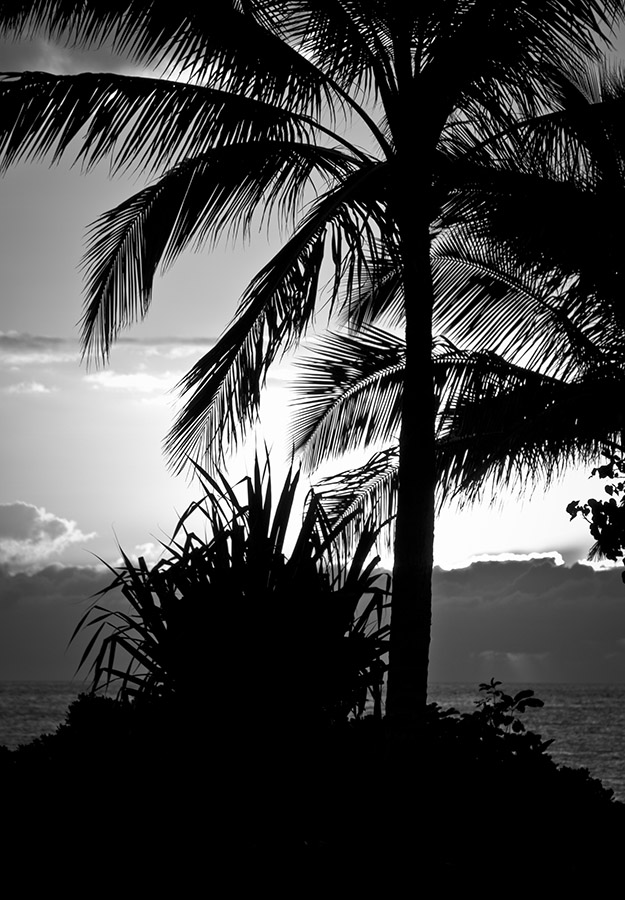 They camped outdoors on the night of their arrival. Steamed potatoes (sweet potato or taro) were brought to them the following day. On the second day after their arrival, Zenmatsu reported, the building of a house for the Japanese was started, probably on orders of the chief. More than fifty persons were engaged in cutting trees from the mountains and building a house with a thatched roof. Only four days after their arrival, the house was completed, and the eight Japanese moved in. People brought Kalo (taro) and Uala (sweet potatoes) in gourd containers while the house was being constructed. A fence was built around the house when the Japanese moved in to prevent others from entering, and a cook was assigned to prepare meals for them. Two Hawaiian guards were assigned since so many onlookers were gathering around the fence trying to look into the house. To satisfy the onlookers’ curiosity, four Japanese in turn walked inside the fence and after a while, people started leaving, talking to each other. More and more onlookers arrived for almost two weeks, but their numbers gradually diminished to thirty to fifty a day. 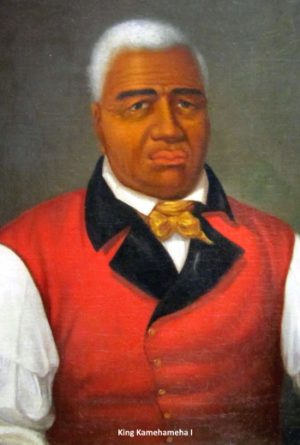 Thus, Delano offered to take them as far as China so that they could find their way back home on another ship inasmuch as only Dutch and Chinese ships were allowed to enter Nagasaki, the only port then open to foreigners.
On August 17, 1806, all eight Japanese left O’ahu with Delano aboard the Perseverance. Zenmatsu described the departure in personal terms: August 15, was a day for festivities for our home village shrine. Everyone felt so homesick, longing to return home. On that same day, an American trading ship, the Perseverance, about 2000 Goku (300 tons), with a crew of sixty-three, arrived in Hawaii for their provisions. Learning of our presence, they came to see us. Upon seeing a banner-like object that was left by the captain of the rescuing ship, and after talking among themselves, they urged us to board their ship. 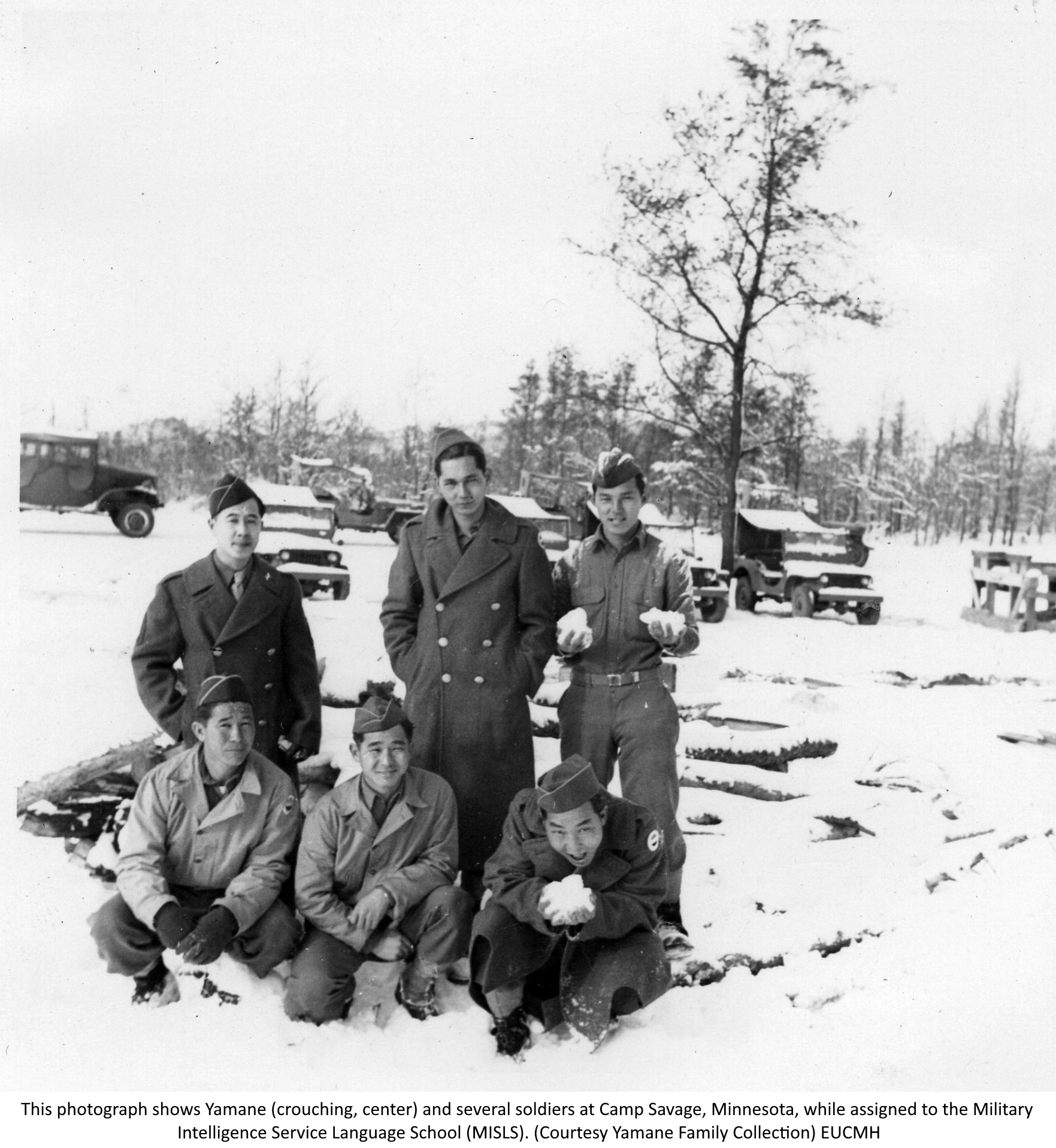 Hurtgenwald – Victory Has Many Fathers, Defeat is an Orphan (Jandrew)