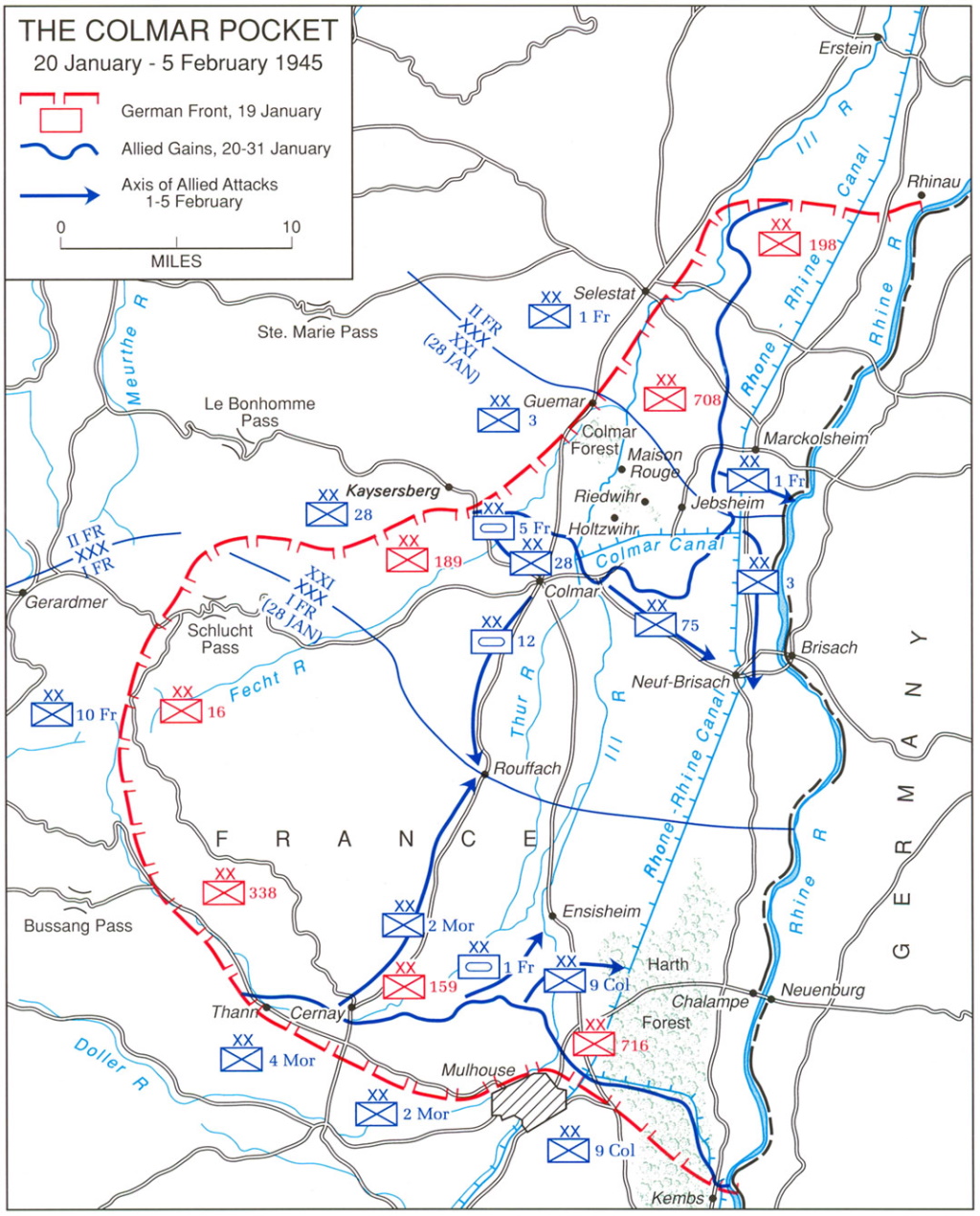 This report is the story of an American rifle platoon that fought to help clear a part of the Alsace Department, France, of a force of Germans who held control of a bridgehead on the western bank of the Rhine River around the city of Colmar in January 1945. These enemy forces had held tightly to their bridgehead since late November 1944, when elements of the American 7-A and the French 1-A, together on the north, and elements of the 1-A (French), alone on the south, had closed to the Rhine River on both their flanks. Constricted on the Colmar plains and in the bordering mountain country to a pocket about 30 miles across at its widest point and 50 miles long at its greatest length, with its heart itself in the city of Colmar, its farthest outposts dug in among the snow-covered mountainous terrain edging the flat plains, and its supply route across the Rhine River east of Neuf-Brisach firm and secure, this hostile force held tenaciously to its bridgehead – through the end of November and early December 1944, when all the allied armies were rolling toward Germany, and then through the rest of December 1944 and early January 1945. During the critical days of the Battle of the Bulge, this enemy pocket constituted a grave threat to the right flank of a thinned-out 7-A which had had to extend its left in order to take over an area of responsibility from the 3-A when this latter force was utilized to thrust north into the underbelly of the German westward smash into the Ardennes. The actions to be described took place on January 22 through the night of January 23-24 1945. The platoon to be followed was the 3rd Plat, Easy Co, 7-IR, 3-ID. 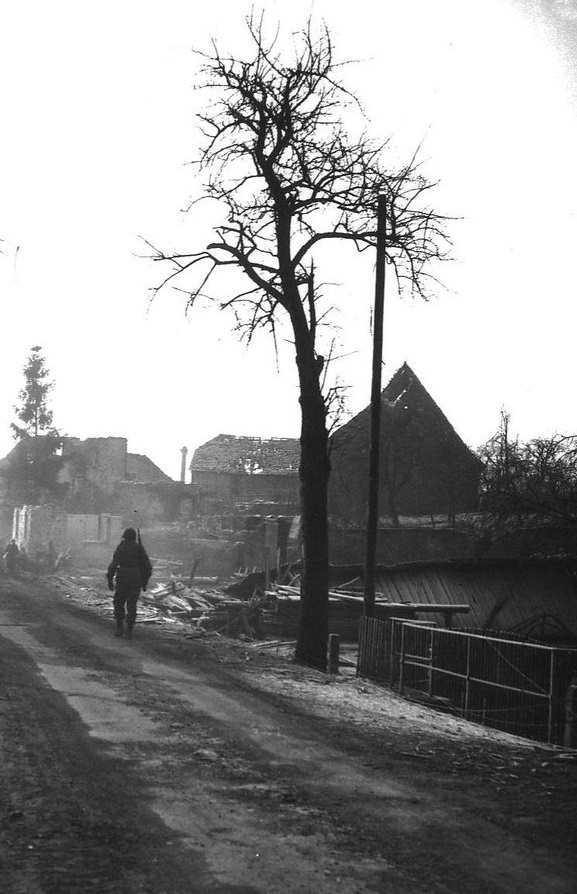 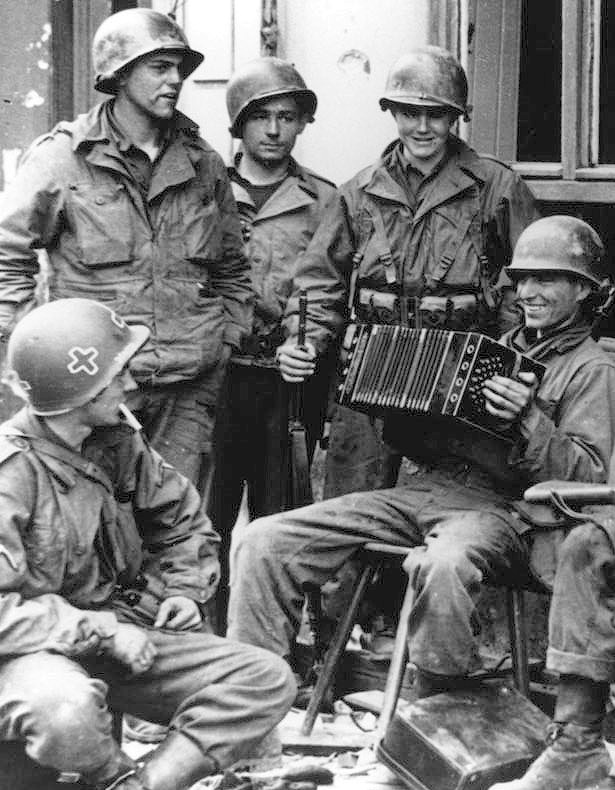 In January 1945, the 3-ID was in contact with an enemy with which it had been continuously engaged for more than five months, ever since its assault landing across the beaches of Southern France on Aug 16, 1944. In those five months the division had fought its way from the Riviera up the Rhone Valley to the foothills of the Vosges Mountains, and then across these mountains in a bitter winter campaign to the Alsatian city of Strasbourg on the Rhine River, from where, in the latter part of December 1944, it moved to relieve the American 36-ID on the Colmar perimeter. For the rest of December and the early days of January 1945, the division occupied defensive positions opposite the German forces which had been built up inside this bridgehead. In its five months of sustained combat, the 3-ID had moved from the near-tropical weather in Southern France to the hill of autumn around Besançon, and eventually to the rain and sleet and snow of winter in the Vosges Mountains. Bitter fighting, particularly in the approaches to the Vosges Mountains and in the crossing of that difficult barrier had depleted its front-line companies of most of the men and officers who had landed with the division in Southern France. Filled with replacements in the mountains on several occasions, the division had lost many of these men also.

The 3rd Platoon of Easy Co, 7-IR, was typical of the rifle platoons in the division. By Dec 3, 1944, after a fierce struggle to clear holding forces of Germans from the western side of the Rhine River in Strasbourg, this platoon had left in its ranks exactly two men who had been with the platoon on D-Day, and one of these had returned from the hospital since the platoon moved into Strasbourg. The platoon sergeant (acting platoon leader) was S/Sgt Eugene B. Adams who enjoyed the honor of being the only original member of the D-Day platoon not to have been wounded or killed or to have become a casualty of the weather up to this date. On this day, Dec 3, 1944, three other non-commissioned officers of the platoon returned from the hospital, S/Sgt Rickles, Sgt Heskitt, and Sgt Blum. S/Sgt Rickles immediately took charge of the platoon, which had squads of four and five men each. 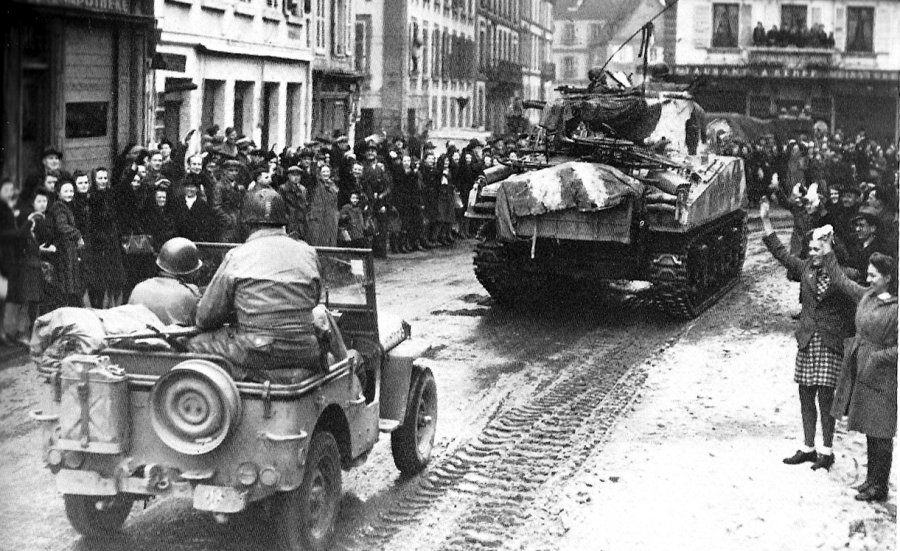 Until December 20, the platoon remained in Strasbourg in positions along the Rhine River. During this period the platoon strength was built up by men returning from the hospital. Most of these men had been replacements at one time or another in the Vosges Mountains. A number were retreads, not at all pleased at having been moved from the safety of some base section to the harshness of a combat rifle company. Still, others were middle-aged men, who found the Alsatian winter hardships of a foxhole almost beyond their physical endurance. An extreme case was the returned veteran, just out of the hospital for wounds, who approached one of the squad leaders and asked to be shown how to disassemble his M-1 rifle. This man had been sent in as a rifle replacement about a month earlier, had been wounded, and now, back in his unit again, had to be taught the rudiments of the weapon which was being placed in his hands a second time.

The platoon, although belonging to a regiment old and experienced and combat-wise with many days of fighting behind it, actually was not a seasoned unit itself. Its non-commissioned officers pulled the load of work. Expecting to be catapulted across the Rhine River in the vicinity of Strasbourg, men of the platoon instead were surprised when they were sent to relieve elements of the 36-ID and became a part of the French forces. Once again the platoon was back in the Vosges Mountains, high, snow-laden, bleak, and cold. For almost a month the platoon engaged in the dirty attrition of defensive mountain warfare. It lost a few men, but in turn, gained a few others who returned from the hospital. By Jan 17, when a platoon from a spanking new engineer company relieved it, the 3rd Plat had built up its strength to about 24 men. It had lost its platoon sergeant and acting platoon leader, Sgt Rickles, who was sent to Epinal to receive a commission and several weeks of training. Its new leader was S/Sgt Blum; its platoon guide, S/Sgt Adams (still un-wounded, but not long to remain so) its two rated squad leaders, Sgt Heskitt and Sgt Fox. In addition, two other men had proved themselves in the mountain patrol clashes and were coming to occupy roles in the platoon leader, Pfc Clifford L. Hubba, and Pfc Dean W. Spaeth. Of these men, Blum, Adams, Fox, Hubbs, and Spaeth were to be the actual leaders when the attack date in Colmar came. 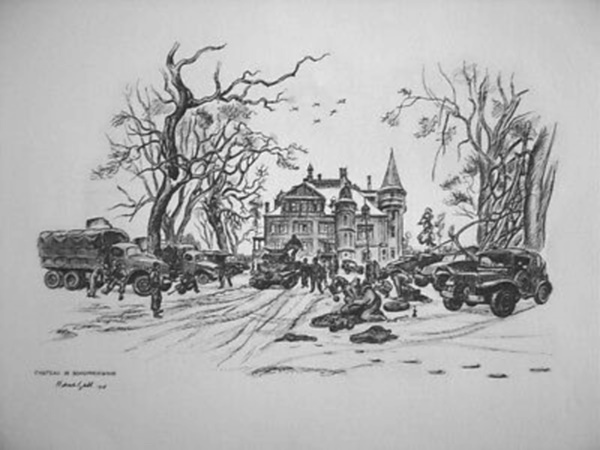 Find someone who sees you the way AI sees you 🤓

Mind yo business, crush your goals, and make moves in silence. You don’t need an audience to achieve greatness. You need to focus 😎

Ed The Red - Summer is the coldest season (Nigel Lowis

442-RCT’s The Rescue of the Lost Battalion (Watanabe)