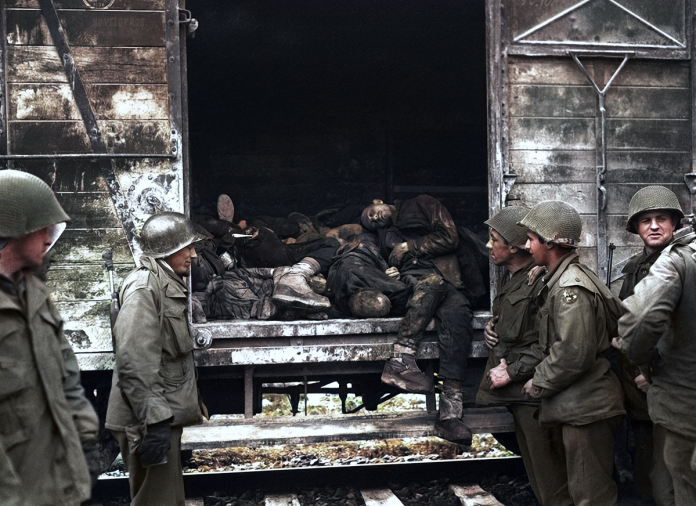 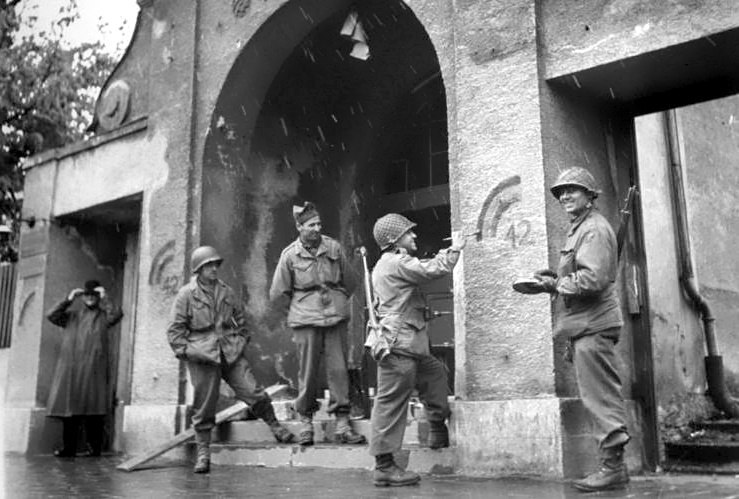 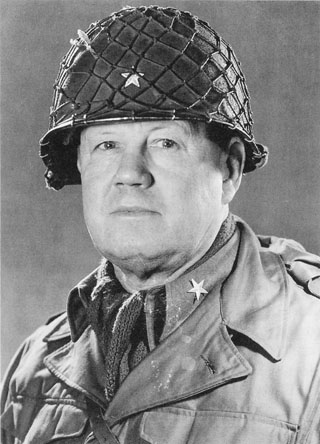 On April 29, 1945, Gen Henning Linden, ADC of the Rainbow 42-ID, Gen Charles Y. Banfill (8-USAAF), Gen Linden’s aide, Lt William J. Cowling, guards, and drivers were en route to the left flank of the Division in the area of the 222-IR, with the mission of locating Col Downard’s battalion of the 222-IR and pushing them on towards Munich.

While passing through the city of Dachau a jeep bearing two newspaper reporters, a Stars and Stripes reporter and a Miss Higgins from the New York Herald Tribune, questioned the aide, Lt Cowling, as to the location of the concentration camp near the city limits. The lieutenant could not give them the exact location of this camp and informed them that he did not believe any American troops have as yet occupied the camp. Gen Linden at this time directed the aide to continue on the road up towards the camp while continuing to look for Col Downard and at the same time take a reading on the situation at the camp.

Lt Cowling proceeded up the road towards the camp. Upon approaching a railroad track a large number of boxcars were observed on the siding, and upon looking back at the cars, which were open on one side, the lieutenant discovered that they were stacked with dead bodies. The lieutenant stopped his vehicle and the two generals and the aide made a quick inspection of the cars. All of the bodies were in an emaciated condition from starvation and many of the bodies showed signs of beating. Several were noted to have been shot through the head. The two newspaper reporters were there at the time. Gen Linden directed the aide to then proceed up the road towards the camp, which he did. As his jeep approached within a couple of hundred yards of the entrance, Lt Cowling saw a German SS Officer (Heinrich Wicker), a German soldier, and a civilian, Victor Maurer wearing a Red Cross armband carrying a white flag, stepping around the corner of a building. 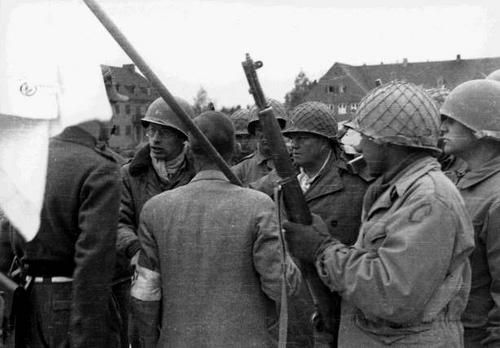 The men dismounted off the jeep and covered the officer as he approached. As Heinrich Wicker approached within a few feet of Lt Cowling he asked if there was an American officer present. Lt Cowling informed him that he was an officer and the SS replied that he wished to surrender the camp.

At this point, Gen Linden arrived and Lt Cowling informed him that he wished to surrender the camp to him and that approximately 100 SS guards still remained in the prison and that they were armed. These guards, however, had been ordered not to shoot the American soldiers but to keep only the prisoners in and to keep them in check. Victor Maurer, the Red Cross man, said there were approximately 40.000 inmates in the prison, many of whom were half-crazed. At this point, a small arms fire came from the left flank. The group took cover momentarily because Gen Linden had the German officer and the soldier standing in the open facing the fire. The fire soon let up, however, and Gen Linden sent Lt Cowling on up into the camp to get the situation. He also sent an officer, Maj Avery, back to the 222-IR to get two companies of infantry up to the camp as soon as possible to take charge of it.

Lt Cowling went through one gate of the camp and just off to the right of the gate about 50 yards observed a tower with German soldiers in it. Lt Cowling called out to them to come down and approximately 12 soldiers came down. Lt Cowling sent them on the back with Gen Linden’s guards. Lt Cowling, one of Gen Linden’s guards, and the two newspaper reporters then proceeded on to the entrance to the actual camp cantonment. As the jeep approached and then crossed a small moat surrounding the main camp, its path was blocked by a dead civilian square in the center of the road. The civilian had been shot in the face and from the looks of the body had been dead not more than 24 hours. 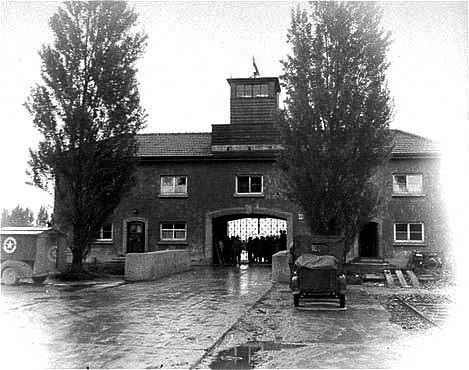 A German soldier guiding the group got off the fender of the jeep and lifted the body out of the way. The jeep then moved up to the iron gate which was the entrance to the main camp enclosure. A guardhouse was on either side of the gate. Lt Cowling did not notice anyone in either of the houses when he first arrived at the gate.

Lt Cowling opened the gate and entered the enclosure. The large enclosure just inside the gate was perfectly clear of any human being when Lt Cowling entered the gate, and the two newspaper reporters followed. Lt Cowling had been in the enclosure approximately a minute and a half when people began pouring from the low, barrack type, black buildings. The people were thin, dirty, and half-starved. 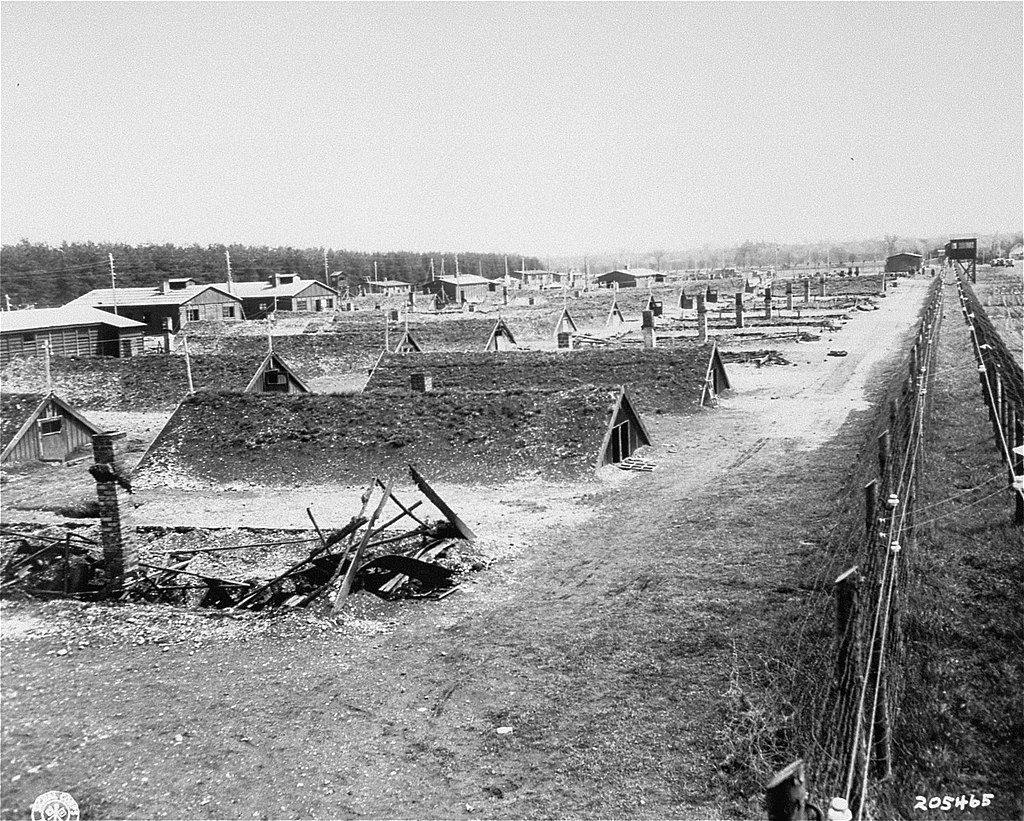 They rushed to the American officer and the two newspaper reporters and attempted to shake their hands, kiss their hands or face, or just to touch their clothing. They even grabbed them and threw them up into the air, shouting in many different languages the whole time, Many of the men were crying and a good percentage of them were half-crazed with excitement and the brutal treatment which they had received while in the camp. The lieutenant finally managed to break free, return to the gate, and close it before more than one or two had gotten out. The people pushed against the gate and attempted to reach between the bars and shake the officer’s hands or touch them. At that point, the lieutenant noticed something in the window of the guardhouse to the left of the gate. 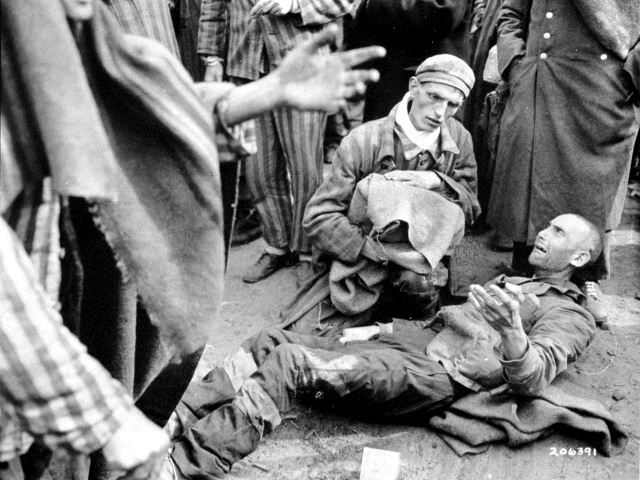 The German officer was waving a white flag out of the window, which practically touched the lieutenant’s shoulder. Lt Cowling immediately went around the entered the guardhouse. Inside were two officers and six German soldiers. One of the officers could speak a little English and asked if there was an American officer present. Lt Cowling informed him that he was an officer and the German told him that he wished to surrender and wished safe conduct for himself and his men. Lt Cowling had him place all the weapons outside the door and then remain in place inside the guard room. Lt Cowling then went back outside the guardhouse and sent his driver back for the other guards.