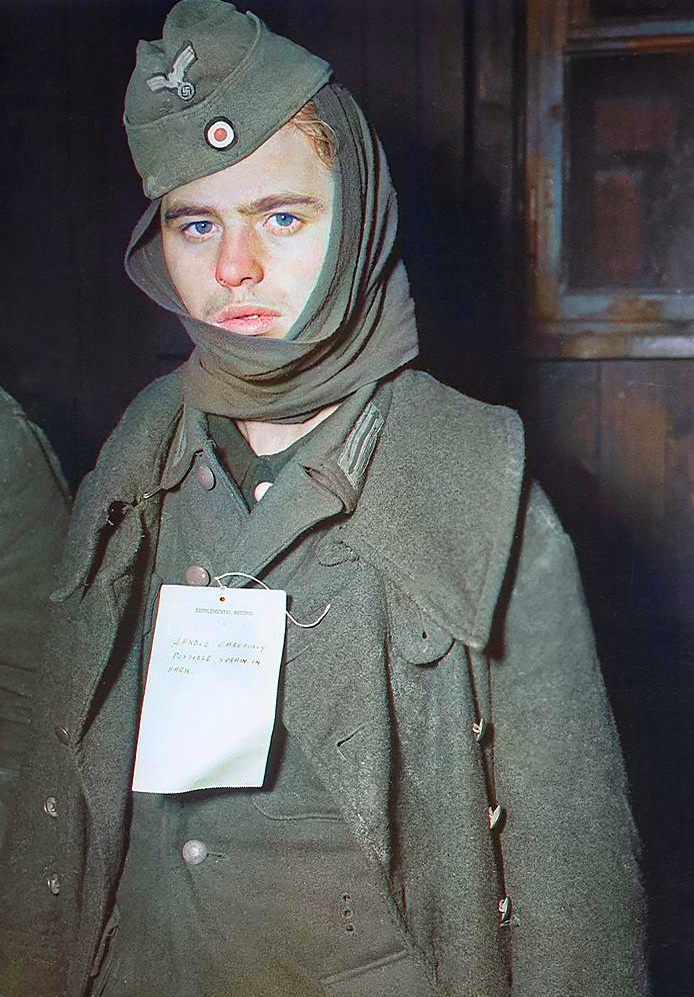 (4) Unit History: The 18.Volksgrenadier-Division was activated in Danemark about 4 months ago. I Battalion, 293.Volkgrenadier-Regiment came from Bleialf (Schnee Eifel). The Battalion left Bleialf on December 17, and has been on the go on foot ever since. The Battalion arrived in Bellevaux (7700) at 2400, December 26.

(5) Circumstance of Capture: PW, originally of 3.Company, 293.VGR, was transfered into Security Squad of I Battalion Hq. Around 1200, December 27, this Squad was taken by an SS-man of a unit the PW couldn’t identify (Panzer-Brigade 150) from Bellevaux into prepared positions (foxholes) in the vicinity of Hédomant (792020). The Squad consisting of seven men relieved SS-men in that position. They were on that Road-Block no longer than 1 hour when they were hit by our artillery barrage which was followed up by our infantry. The Prisoner of War didn’t know what had happened to the other 6 men of the Squad. The Squad was armed with one LMG and machine-pistols.

(6) Miscellaneous: The Prisoner saw no German positions on his way from Bellevaux to the Road-Block. He didn’t know what had become of the Companies of the Battalion. He saw no tanks, no artillery positions in the vicinity, and wasn’t told by any minefield in the area. He know nothing about the mission of his Battalion. The CO of the 3.Company, 293.VGR was a 1/Lt Brand.