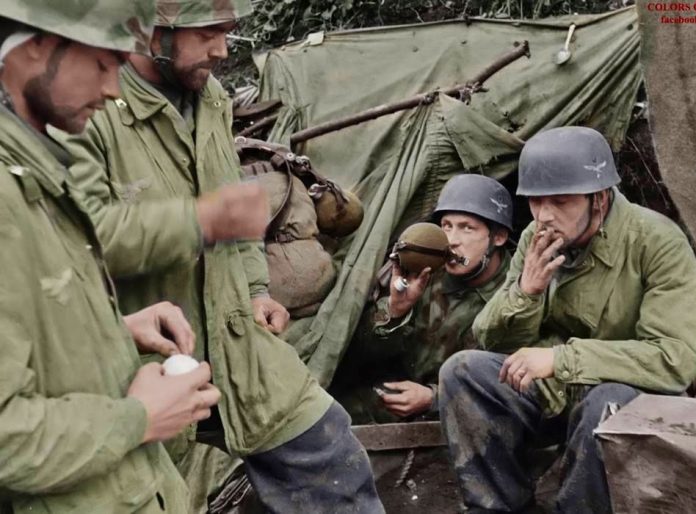 However, the Fallschirmjaeger units may be used, they still remain part of the enemy’s diminishing Infantry reserves. Therefore, just as with the Panzers, of which all bit the 10.SS-Panzer-Division and the 21.SS-Panzer-Division are now committed in the offensive, careful attention must be paid to Infantry identifications, both old and new. The enemy does not have limitless reserves. In fact, there are strong indications that he is beginning to reach the end of his strained manpower resources available for commitment in the West. Therefore in this struggle of reserves the ability of the enemy to maintain the momentum of his offensive depends on the number of uncommitted divisions he can muster in the Western battle area.

Preamble: He joined the army in 1925 as a Pvt. Two years later, after he attained the rank of Sgt, he was kicked by a horse and had to leave the service. Following this, he entered the University of Vienna and in 1930, he received a $1500 Carnegie Institute Endowment to study international law. He has gotten to like the Americans for this and with his pockets full of money, he could even afford to date the daughter of the American Military Attaches in Vienna. In 1935, he joined the army, received a commission and a rapid promotion and in 1938, he was captain in the General Staff. This life seemed too quiet for him and he joined the parachute arm soon afterwards. His first action in this war was as CO of a battalion in the 3.Fallschirmjaeger-Regiment in Russia.

Then came the Airborne invasion of Crete, and for this he received the Knight Cross. Following this, he became G-3 to the Ramke Brigade in Africa and after some fancy running to the rear, he found himself in Italy where he fought for a while against the Badoglio Troops. When Ramke formed the 2.Fallschirmjaeger-Division in Koelwahn, he became the CO of the 6.Fallschirmjaeger-Regiment and was in action with this unit throughout the Battle of France and Holland. On Sept 30, 1944, he received the Oak Leaves to the Knight Cross from Hermann Goering in person and on Oct 25, 1944, he les the 6.Fallschirmjaeger-Regiment to form the nucleus for his infamous jumping mission. Prisoner of War, though he disclaims any party connections and claims to be a knightly soldier, is a dangerous character and his soft and allegedly intelligent talk was full of falsity and Nazi propaganda. He is extremely shrewd, speaks fluent English and as could be expected, he offered only fragmentary information.

OB Information: Prisoner of War claims that approximately 1200 men of his unit were dropped by two groups of 53 Ju52 planes each (from Transport Group 30, CO Maj Baumann). He further claims that his unit had 6 Companies, and was 1200 men strong. (All other PWs gave identical information that the unit had only 5 Companies and that the maximum strength of the Kampfgruppe was 800-900 men. It is very probable that Oberst von der Heydte was lyingh deliberately in order to mislead us).

PW states that he received his mission from Gen Kurt Student on Dec 10. Then he had a conference with Gen Dietrich Peltz (in charge of the Luftwaffe for the offensive) and discussed the details for the landing with him. Gen Peltz promised him the best available pilots for the operation. On Decv 12, he went to SS-Gen Sepp Dietrich’s Hq (refused to disclose the location) and there he found out that the code name for his mission, was Stoesser. Gen Dietrich told him that he is planning to knock the Americans out of the war (he’ll show them) and he also promised him that his Fallschirmjaeger unit would be relieved by 1700, on Dec 17, by one of his Panzer Divisions – whichever gets there first.

PW states, one SS-Obersturmfuehrer and two men of the 12.SS-Panzer-Division jumped with his unit and were supposed to act as forward observers for the advancing tank column. Their radios were destroyed during the jump and consequently there were no communications. Von der Heydte claims that he suggested Gen Dietrich to have Artillery FO’s jump with the troops and adds that he learned this trick from the Americans in Normandy. He evaded all the questions on the mission of the offensive, but suggested that all the SS Divisions, from 1 to 12, were connected with it and that Dietrich is in charge. Von der Heydte was very much surprised when he found out that Monschau was in our hands; he had no information about the progress of the offensive.

Sepp Dietrich: The Prisoner of War referred to him as a Wachtmeisterwho had no knowledge of military affairs and claims that he is not fit to lead an army. He is the only SS-Oberstgruppenfuehrer in the SS and he possesses all possible German decorations. He describes his HQs as swarming with SS Generals and add dryly that it is very easy to become a general in the SS. He believes that many of these Generals have been transfered from the Allgemeine SS. He states that he would have preferred to serve under another commander than Sepp Dietrich, but orders are orders.

Rundstedt: Von der Heydte states that he is an old, sick man who is Commander in Chief West in name only as the Army Group commanders are in charge of the operations. He suggests though that Himmler may have strong hand in army matters.

Student: Von der Heydte states that he is in command of Army Group (H) and that General Schlemm is in charge of the Fallschirmjaeger Army Headquarters.

Hermann Goering: The Prisoner of War was decorated by him end Sept at the Luftwaffe Ministry in Berlin. He states that the Marshall has lost some weight and that he also took off some of his Rumanian, Bulgarian and Finnish decorations. The Marshall made a statement that he once formed the most powerful Luftwaffe in the world out of nothing and saw it disintegrate into nothing, and that he can and will rebuild the Luftwaffe out of nothing once more. Von der Heydte believes that the main reason for the establishing of new Fallschirmjaeger Divisions from former Luftwaffe personnel is Goering’s desire to have a buffer against the SS Divisions. The Prisoner claims that the new Fallschirmjaeger Divisions are just a big a joke as the dissolved LUftwaffe Feld Divisions.

Wilke (5.Fallschirmjaeger-Division): Von der Heydte considers him a very poor General and likens him to General Heyking, former CO of the 6.Fallschirmjaerger-Division who is in our captivity. He said that the Germans were the winners when we captured Heyking.

Possible new German Fallschirmjaeger landings: Oberst von der Heydte believed that that they are probable even though he admits that the Germans lack trained Paratroopers. However, he claims that one does not need any trained Paratroopers to jump, any infantryman can do the job. He states that the Germans have sufficient planes, gliders and leaders for such an undertaking.

Length of the war ? Until a stalemate is reached on the Western front and the Allies finally come to realize that the only menace to the world is Bolschevism. The Germans can win the war because they are smarter than we are.
Destruction of German Industry: The industry has been decentralized. You can destroy cities, but it is impossible to destroy German industry.
Final comment: Should you hear over the radio that I received the Swords to my Knight Cross, please notify me.