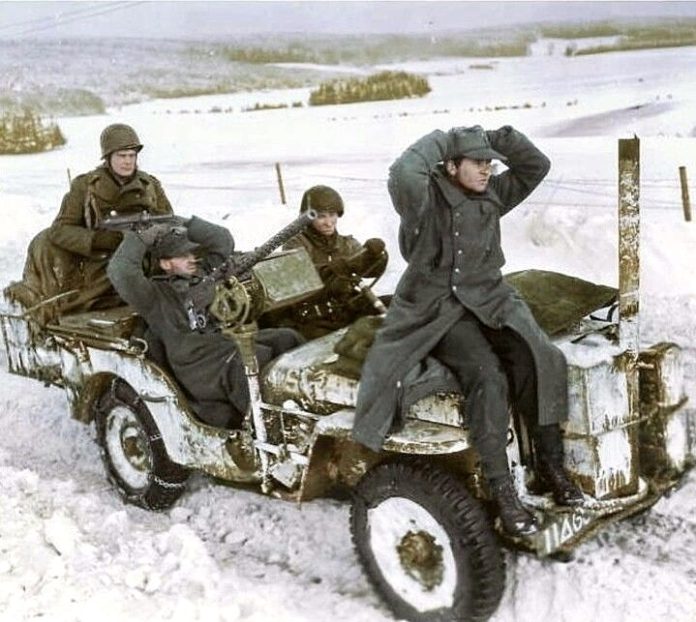 Unit:
Einheit , CO SS-Obersturmführer Horst . Einheit Steilau, part of SS.Panzer-brigade 150, had been assembled from the brigade’s best English speakers, but few of them had much if any experience of undercover operations or sabotage. There was little time to train them properly, but they were given short courses in demolition and radio skills, studied the organization of the US Army and its badges of rank and drill. Some members of the Einheit, were even sent to the Prisoners or War Camps at Küstrin and at Limburg to refresh their language skills through contact with US POWs. Dressed in American Army uniforms (the highest rank used was that of colonel), armed with US weapons, and using US jeeps, the commandos were given three missions: (1) Demolition squads of five or six men were to destroy bridges, ammunition dumps, and fuel stores; (2) Reconnaissance patrols of three or four men were to reconnoiter on both sides of the Meuse river and also pass on bogus orders to any US units they met, reverse road signs, remove minefield warnings, and cordon off roads with warnings of nonexistent mines; #3 The lead commando units would work closely with the attacking units to disrupt the US chain of command by destroying field telephone wires and radio stations, and issuing false orders.

Panzer Brigade 150, CO SS-Obersturmbannführer Otto Skorzeny. The timing of the Ardennes Offensive meant that Skorzeny had only five or six weeks to recruit and train a brand new unit for what Hitler named Operation Greif. Within four days he sent his plans for Panzer-Brigade-150 to Generaloberst Alfred Jodl. Despite asking for 3300 men he was given an immediate go-ahead and promised full support. The Oberkommando der Wehrmacht issued an order on October 25, 1944 requesting suitable soldiers for the operation with knowledge of the English language and also the American dialect which was passed on to every headquarters on the Western Front, and this request soon became known to the Allies.
The new Panzer Brigade needed US Army vehicles, weapons and uniforms; OB West was asked to find 15 tanks, 20 armored cars, 20 self-propelled guns, 100 jeeps, 40 motorcycles, 120 trucks, and British and US Army uniforms all to be delivered to the brigade’s training camp which had been set up at Grafenwöhr in eastern Bavaria. Equipment delivered fell short of the requirements, including only two Sherman tanks in poor condition, and Skorzeny had to use German substitutes, five Mark V Panthers and six armored cars. The brigade was also flooded by Polish and Russian equipment sent by units who had no idea what the request was for. To make matters worse, Skorzeny had only 10 men who spoke perfect English and had some knowledge of US idioms, 30-40 more spoke English well but had no knowledge of slang, 120-150 who spoke English moderately well, but the majority of his men spoke little to no English. Faced with these setbacks, Skorzeny scaled down Panzer Brigade 150 from three battalions to two and assembled the 150 best English speakers into a commando unit named Einheit . Skorzeny also recruited a company of SS-Jagdverbände “Mitte” and two companies from SS-Fallschirmjäger-Abteilung 600, and was given two Luftwaffe parachute battalions formerly of Kampfgruppe 200, tank crews from Panzer regiments, and gunners from artillery units. A total of 2500 men were eventually assembled at Grafenwöhr, 800 fewer than had been hoped..

Captured: December 18, 1944, at Aywaille, Belgium.
Preamble: one Wehrmacht, one Kriegsmarine, and one Luftwaffe man prepared to pay the price.

At the beginning of November 1944, recruiting for Stab Solar (Stab Solar = SS-Obersturmbannführer Otto Skorzeny = Panzer-Brigade 150), started. Men belonging to all armed forces and known to speak English, preferably with an American accent, were commanded to this Stab by their superior officers but Gefreiter Wilhelm Schmidt states he volunteered ‘for a mission where linguistic knowledge was desired’. PWs Billing and Schmidt had to report to an SS Camp in Friedenthal, about 2 km away from the Concentration Camp in Orianenburg. In Friedenthal, Schmidt was examined as to his linguistic abilities by a board consisting of one SS, one Luftwaffe, and one Naval officer. He and 20 to 30 other men including officers, were told that the outcome of the examination would decide whether they were to go to the Interpreters School in Grafenwoehr or Nuernberg or Orianenburg or whether they were to return to their respective units. Schmidt passed the examination but was ordered to refresh his English and for this purpose served 3 weeks in a Prisoner of War Camps in Kuestrin (2000 US PWs) and Limburg a.d. Lahn (1000 US PWs). Then he was sent to Grafenwoehr. Billing was sent there from Friedenthal without examination and Pernass (obviously because he was considered for driver’s duties only) was sent directly to Grafenwoehr without reporting to the board in Friedenthal.

According to the Prisoners, the following troops were in the Training Center in Grafenwoere, Fallschirmjaeger, Panzer Grenadiers, Luftwaffe Radio Operators and Linguists. The Prisoners estimated the entire strength at 700 to 1000 men. Of these, 150 were linguists. There are strong indications that all of these men were controlled by the Panzer-Brigade 150 which trained in Grafenwoehr and to which most of the above 700-1000 men belonged. The CO of the Panzer-Brigade 150 (not an SS Brigade) was SS-Obersturmbannführer Willi Hardieck. The Prisoners claim they do not know much about the composition of their Brigade except it is equipped with Mark V Panther Tanks.

The 150 Linguists were formed into a unit ‘Einheit ’ by name. The title was taken from the unit’s CO, SS-Obersturmführer Horst . The real CO of the Einheit, however, was SS-Obersturmbannführer Otto Skorzeny aka Solar, commanding the Stab Solar (4 other Officers belonged to the Headquarter). Prisoner Billing who was admitted to the officer’s mess states that about 40 Officers (Wehrmacht, Kriegsmarine, Luftwaffe) were in the group of 150 Linguists. Only two came from the SS. One of the officers was Major Lorenz. All the others were company Officers. The Linguists were trained in Grafenwoehr up to November 15 and then in the neighboring Camp in Vilseck until December 6 or December 7. At first, they were divided into three groups according to their linguistic abilities. Then they were formed into a Pionier Group (Engineer), a Nachrichtenzerstorer Group (Communications & Sabotage) and a Funker Group (Radio Operator). Within these three groups, small squads consisting of 4 Officers or EM were eventually formed. Prisoners state that some squads had no Officer and some even 2 or 3. Their training consisted of American Organization, identification, close order drill, and linguistic exercises for the different groups.

At the beginning of December, the first US weapons and uniforms arrived together with 30 jeeps bearing arbitrary markings. The destination of the groups became clear and none of the men protested. On December 5 or 6, the Panzer-Brigade 150 moved to Munstereifel, Einheit left on December 8 and arrived in Munstereifel during the night of December 12/13. The group camped in tents or in the houses about 1 km outside Munstereifel. There, additional US clothing and documents (drivers licenses and pay books) were distributed. On December 14, 29 jeeps, one with each squad of 4 men departed, heading for Hallschlag and Stadtkyll where Stab Solar was located. Prisoners who overslept followed one day later. All men were dressed in American uniforms and had American weapons. For secrecy’s sake, however, they were told to wear a German Paratroopers jump jacket while on the German side of the line.

Mission: Prisoners state that the mission of the Einheit was to spearhead the German armored attack. All jeeps were supposed to operate independently in the rear of the American lines. The 10 Pionier Teams (Engineer) were to act as commando groups and to destroy Headquarters and Headquarter’s personnel, the 10 Nachrichtenzerstorer Groups (Communications & Sabotage) were to eliminate message centers, radio stations, and communications lines in order to create confusion and to make the German advance easier. The Funker Teams (Radio Operator) were to reconnoiter behind the American lines and keep the approaching German armored columns informed about the American intentions and dispositions. Prisoners who belonged to the Funker Team state that they were to cooperate with the Panzer-Brigade 150 via the (Leitstelle) message center. They believe that other Teams of the Einheit were to collaborate with other armored units. Prisoners were unable to identify these. They identified the Paratroopers of the Panzer-Brigade 150 employed as infantrymen near or in Stavelot.

Oberfaehnrich N.N. Naval Signal Service Günther Joachim Billing; Gefreiter Wilhelm ‘Willi’ Schmidt and Unteroffizier Manfred Franz Joachim Pernass were captured in Aywaille, Belgium, on December 18, 1944, when they were unable to give out the correct password at a US Military check point. The Prisoners, Billing, wearting the ID of Clarence van de Wert (US Army); Pernass, wearing the ID of Charles W. Lawrence (US Army) and Schmidt wearing the ID of George Sensenbach (US Army), were given a Wartime Military Trial in Eupen, Belgium, sentenced to death and executed by firing squad at Henri-Chapelle, Belgium, on December 30, 1944, at 1400.