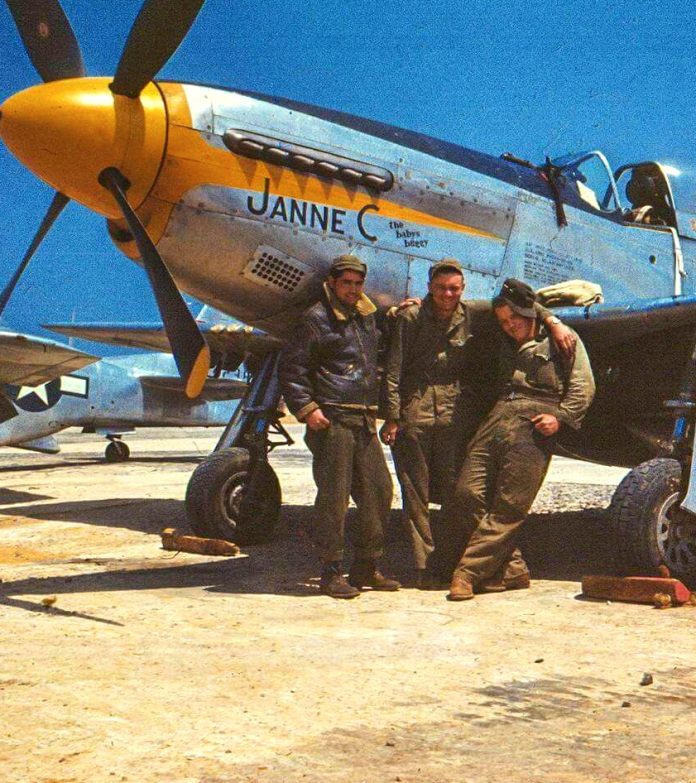 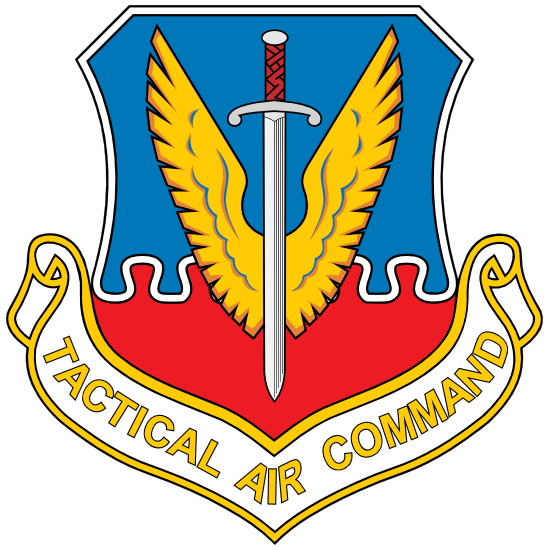 The XIX Tactical Air Command (XIX TAC) (Fly Seek Destroy) is an inactive US Air Force unit. The unit’s last assignment was with the Ninth Air Force based at Biggs Field, Texas. It was inactivated on March 31, 1946. During WWII, the mission of the XIX TAC was to support Gen George S. Patton’s US Third Army with tactical air support throughout the army’s advance from formation in France on August 1, 1944, until VE-Day.

Formed in England in early 1944, the XIX TAC was a command and control organization, designed to provide air support to the Army Ground Forces, primarily with P-47 Thunderbolt and P-51 Mustang aircraft. The XIX TAC supported all of the Third Army operations and more. Its roles included a bewildering number of missions: close air support, battlefield air interdiction, deep interdiction, dive bombing, counter-air reconnaissance, and even leaflet dropping. The Command close air support mission took its most concerted, extended, and spectacular form in supporting Patton’s armored and motorized infantry columns as they sped across France.

The Third Army’s tank crews and their accompanying air support officers pointed out enemy concentrations, and divisional artillery at times gave further assistance by marking targets with smoke. In return, the P-47 and P-51 pilots of the XIX TAC provided cover for the tanks in one-hour shifts with four aircraft per flight, and four more on-ground alerts could be called in if necessary. As little as three minutes after being contacted, they could strike the designated target, thereby freeing the armored forces to continue their advance. 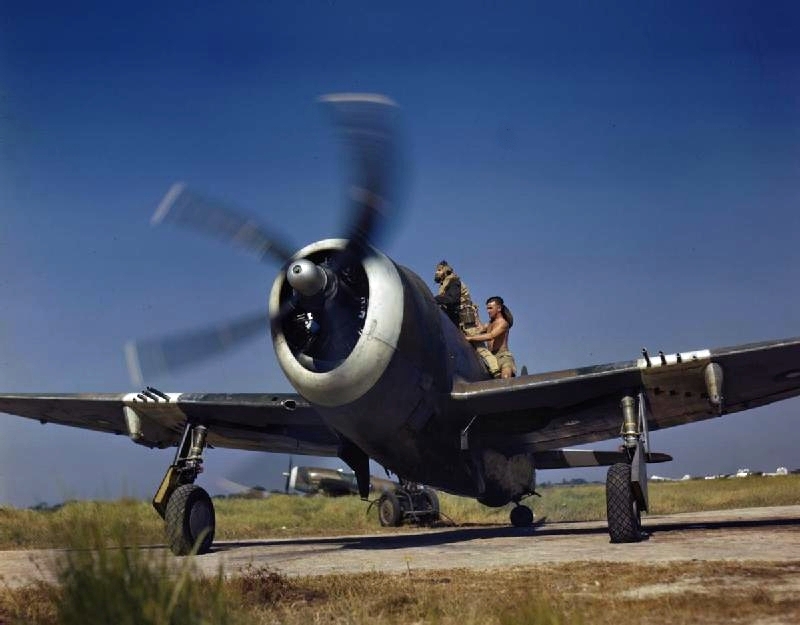 Another of the XIX TAC’s missions was dive bombing, is normally thought of as a tactic, but the XIX TAC considered it a separate mission. It resembled deep interdiction, for both types of missions made use of various aerial bombing techniques and normally attacked similar, prearranged targets. But while deep interdiction was designed to cut off enemy movements either in or out of the combat zone, dive-bombing missions were most often used for static warfare. They were employed, for example, during the unsuccessful September attempt to seize Metz, and their most extensive use was during the siege at Brest. The results of Brest were not particularly impressive. It was soon obvious that the defenders – as part of Hitler’s hold on to the ports strategy – had ample provisions and were determined to hold out. It also became evident that the XIX TAC fighters and fighter-bombers assigned to the operation were insufficient to perform effectively all of the tasks they were expected to carry out, particularly in terms of dive bombing. The XIX TAC’s P-47s and P-51s simply did not have the bombing power to bring about the desired results. Thus the American commander called on other air formations to assist. Eighth Air Force responded between 11 August and 5 September with four missions in which 983 B-17s dropped 2520 tons of bombs.

British Bomber Command made two raids with approximately 220 Lancasters taking part. The US IX Bomber Command’s B-26 Marauders and new A-26 Invaders undertook six missions. The IX TAC loaned some of its squadrons to the XIX TAC – squadrons that flew 839 sorties between Sept 5 and Sept 11, when Brest’s capture was accorded a high priority. By the time the last of Germany’s beleaguered troops capitulated on Sept 19, the Allies had flown more than 3500 Brest – related sorties. The city was in shambles. Its port facilities, for which the operation originally had been undertaken, were so badly damaged (by German demolitions along with Allied bombing and artillery shelling) that the Americans never used it as a major supply port. Obviously, air power had affected the outcome of the battle but not in the way that had been hoped for. 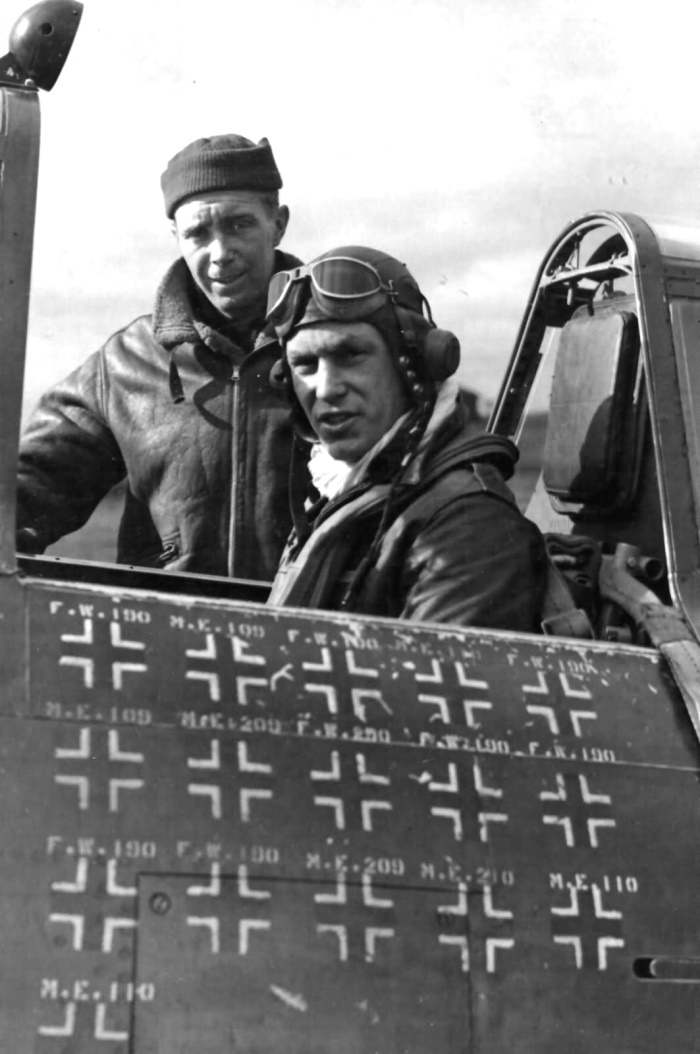 The XIX TAC was also involved in counter-air operations, although, because of the Luftwaffe’s relative weakness, to a lesser extent than it might have been. Only in critical situations or when they had a numerical advantage did Jagdkorps II’s Bf-109s and FW-190s venture out and pose a threat. During the early August Mortain counter offensive, German fighters and some bombers did support the attack, but they were overwhelmed by the Allies’ superior numbers, better aircraft, and experienced pilots. While the IX TAC led the counter-air response, the RAF and the XIX TAC’s 354th Fighter-Bomber Group of P-51s also lent a hand. At Falaise, the German Luftwaffe again was active, and the XIX TAC’s fighters performed a variety of defensive and offensive counterair tasks – intercepts, sweeps, combat air patrols, and escorts, including bomber escorts – along with other support missions. Near Paris, US pilots also encountered opposition; but at times several of Weyland’s groups reported seeing no enemy aircraft for days at a time. Although the Allies remained aware that the situation might change, Allied aircraft now reigned supreme.

The XIX TAC further undertook reconnaissance duties. Most of the sorties were confined to visual reconnaissance, but they included day and night photo missions as well, especially from the 10th Photo Group, whose P-51s were stationed in the area. Overall, during the two months, aircraft under Weyland’s command flew 2011 reconnaissance sorties, or slightly more than 9 percent of the 22233 total sorties flown. One final mission was that the XIX TAC pilots performed several special air operations in the form of leaflet-dropping sorties. During August and September, the XIX TAC was involved in seven different missions – close air support, battlefield, and deep interdiction, dive bombing, counter-air, aerial reconnaissance, and special operations.

Within one month of the day when the Third US Army and XIX Tactical Air Command of the Ninth Air Force began operations together in France, the armored and infantry divisions and covering fighter-bombers of this new ground-air team had broken out of Normandy into Brittany, conquered all of that peninsula except three stubborn ports, firmly secured the line of the Loire River, and swept 140 miles beyond liberated Paris to within 60 miles of the German border. While the events are still warm these notes and historical records are written, with the hope that some of the many lessons in teamwork and technique which were learned in that eventful month may be of tactical value. 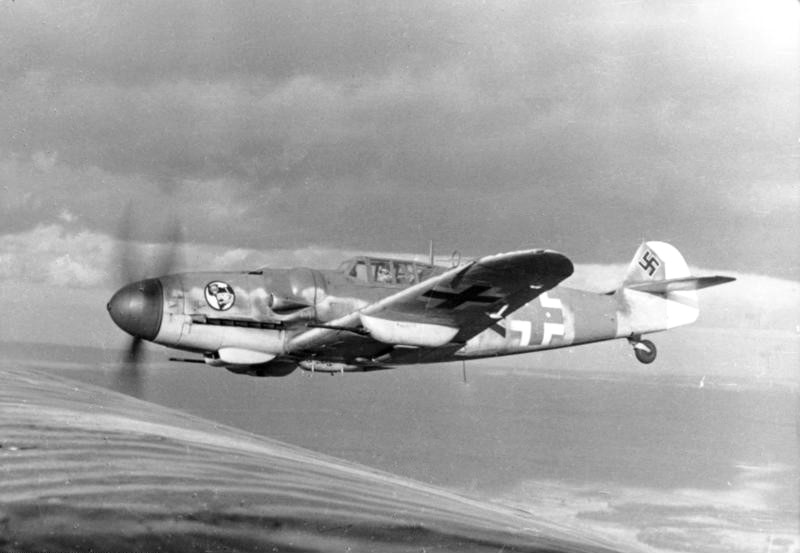 The operations of the XIX Tactical Air Command in the field have proved the basic concepts of FM 100-20 to be basically sound.
(a). The order of priority of tactical missions: (1) Attainment and maintenance of air superiority; (2) Isolation of battlefield; (3) Close air support to ground units in combat.

(a). There is no provision for air liaison officers for assignment to corps and divisions in any Tables of Organization within the Tactical Air Command. Air Liaison Officers are being used and have proved of extremely great value and have assured smooth cooperation in joint operations. Provisions should be made in the Tables of Organization of the Tactical Air Command for air liaison officers of field grade. In this Command they have been carried as overages and have consequently been blocked in the promotion and blocked promotions of deserving officers in the Command.
(b). It became apparent in the early stages of rapid advances of army divisions that one air support party per armored division was inadequate. The armored divisions of the Third Army habitually advance in two or three columns, each comprising a combat command. Because of their physical separation and rapid movement, it was found necessary to provide an air support party for each combat command. A sufficient number of air 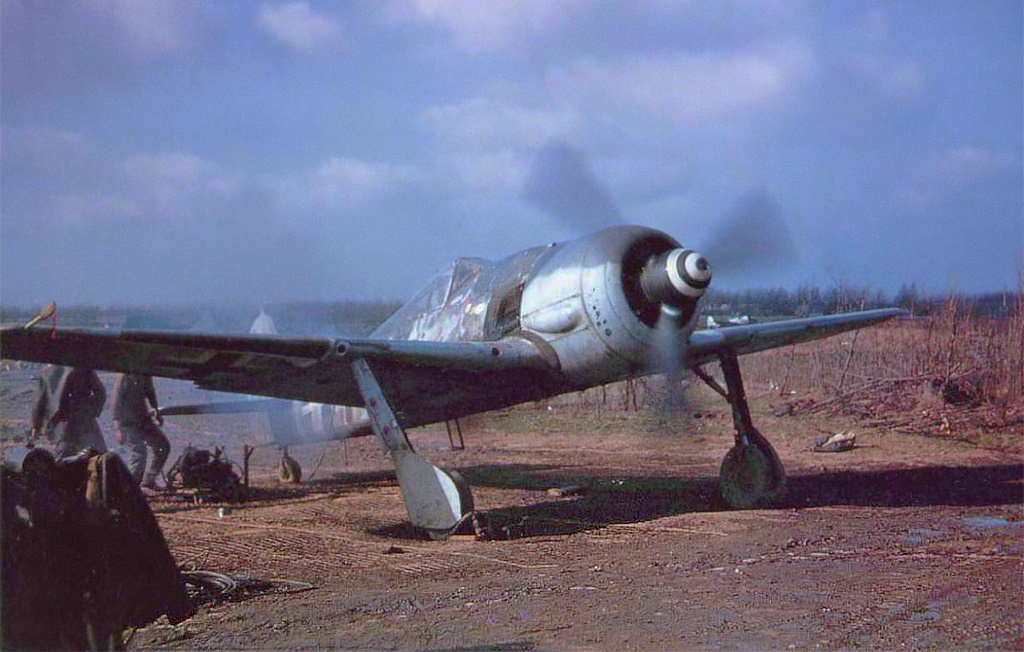 support parties, complete with equipment and operating personnel, should be provided for in Air Corps Tables of Organization to furnish three parties for armored divisions. In the current campaign, these parties have been improvised.

Wire communications for the Command, and control between the various elements of the Tactical Air Command, have proved unsatisfactory under conditions of rapid advances. This was due to long lines of communication, cutting off lines by saboteurs, shortage of wire, shortage of repeater and carrier equipment, and shortage of maintenance, construction, and operating personnel. A system of radio teletype and telephone should be developed capable of carrying all Tactical Air Force’s communication loads. The equipment and personnel to maintain and operate this system should be incorporated in Tables of Organization of Air Forces and Tactical Air Commands.

The assignment and operation of a Center with Fighter Wings have proven unsatisfactory for offensive Tactical Air Control purposes. To overcome this, 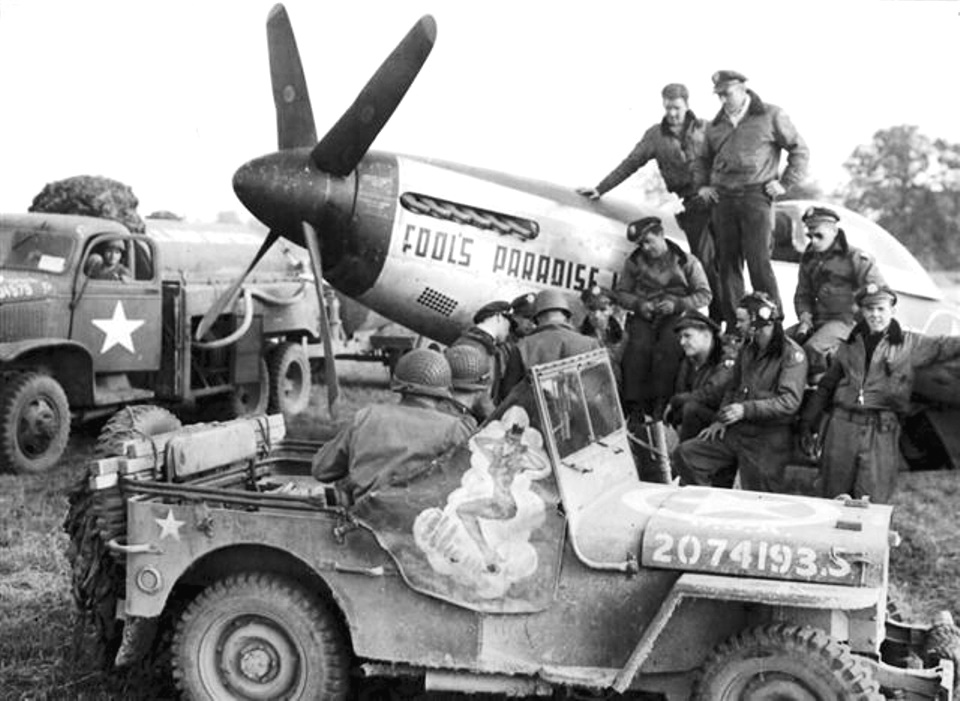 all aircraft warning units, fighter control squadrons and radio intercept ‘Y’ service have been organized into a provisional Tactical Control Group and placed directly under the control of the Advanced Headquarters, XIX Tactical Air Command. Elements of the Tactical Control Group are maintained very close behind the advanced ground troops and close to, but not necessarily with, the Advanced Tactical Air Command Headquarters.

An adequate air service command and aviation engineer command are absolutely essential to the mobile tactical air force and have proved their worth in this theater. Because of the pooling of motor transportation in the communications zone, the Air Service Command has not always been able to adequately supply or move the tactical units. I strongly believe the Air Service Command should have sufficient motor transport to move and supply the tactical units over distances up to three hundred (300) miles. It is believed the service team should be an organic part of the combat group in a mobile Tactical Air Command.

Airdrome squadrons have proved invaluable in maintaining tactical operations by refueling and rearming units at advanced landing grounds. They have also proved their worth in temporarily servicing tactical groups at new airdromes while the group’s ground personnel was being leap-frogged forward. 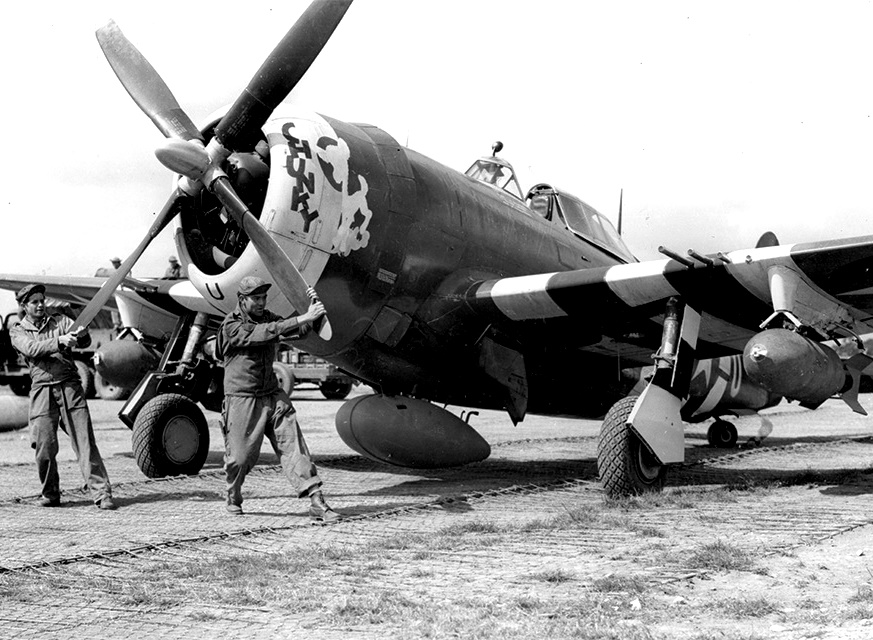 The P-47 airplane has been extensively used with very great success in strafing locomotives, trains, motor transport, horse-drawn transport, and armored vehicles. Armor-piercing incendiary ammunition has been shown to be far more effective on these strafing operations than the mixed loading of two armor-piercing, two incendiary, and one tracer. Likewise, it has been found far more effective in use against hostile aircraft in the air and on the ground. It is recommended that straight API ammunition be furnished to fighter-bomber groups.