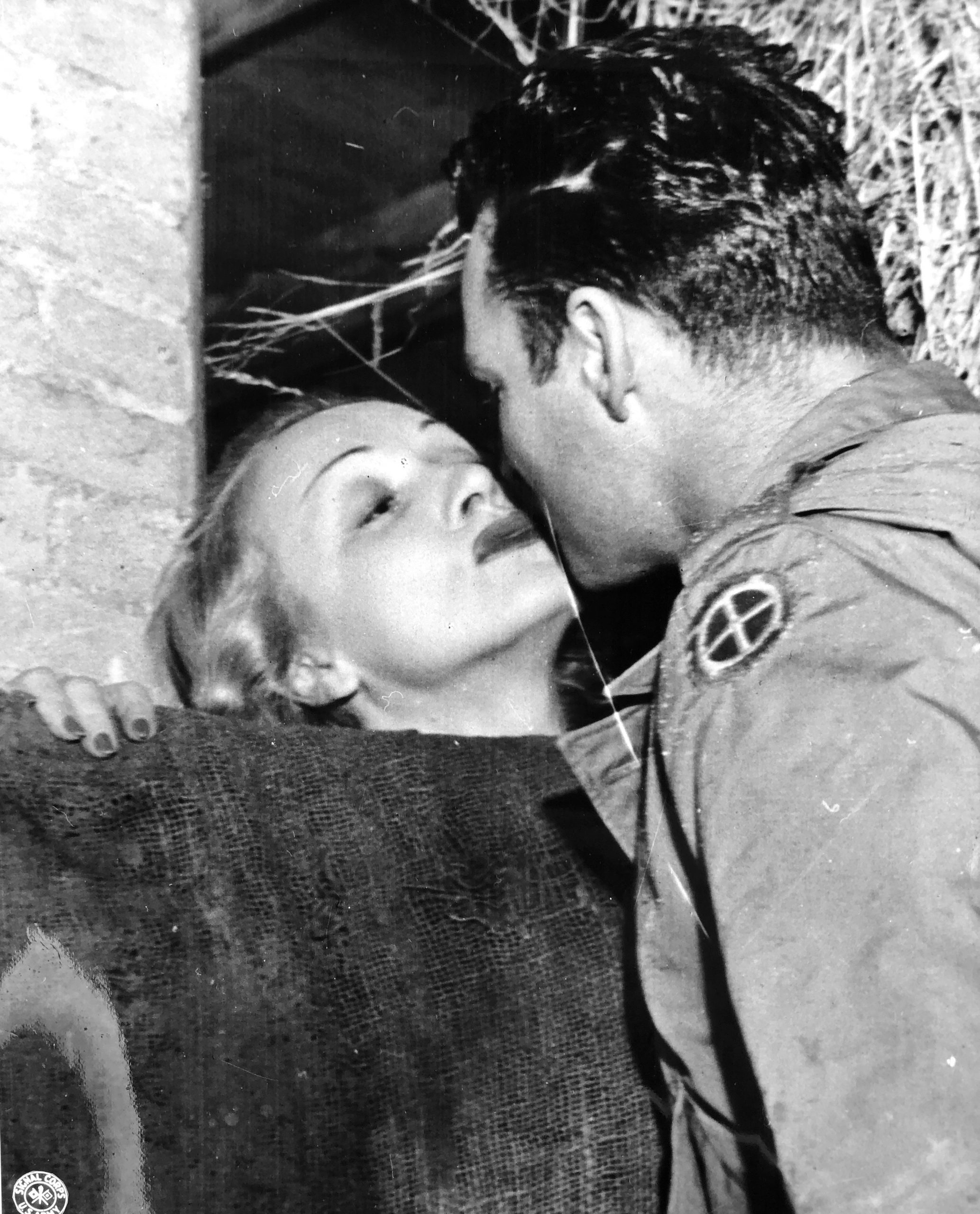 Marlène Dietrich is poissed for a kiss from Sgt Stanley R. Strurous, as he satnds at the stage doors, somewhere in the ETO. (134th Infantry Regimenty, 35th Infantry Division. October 27, 1944) 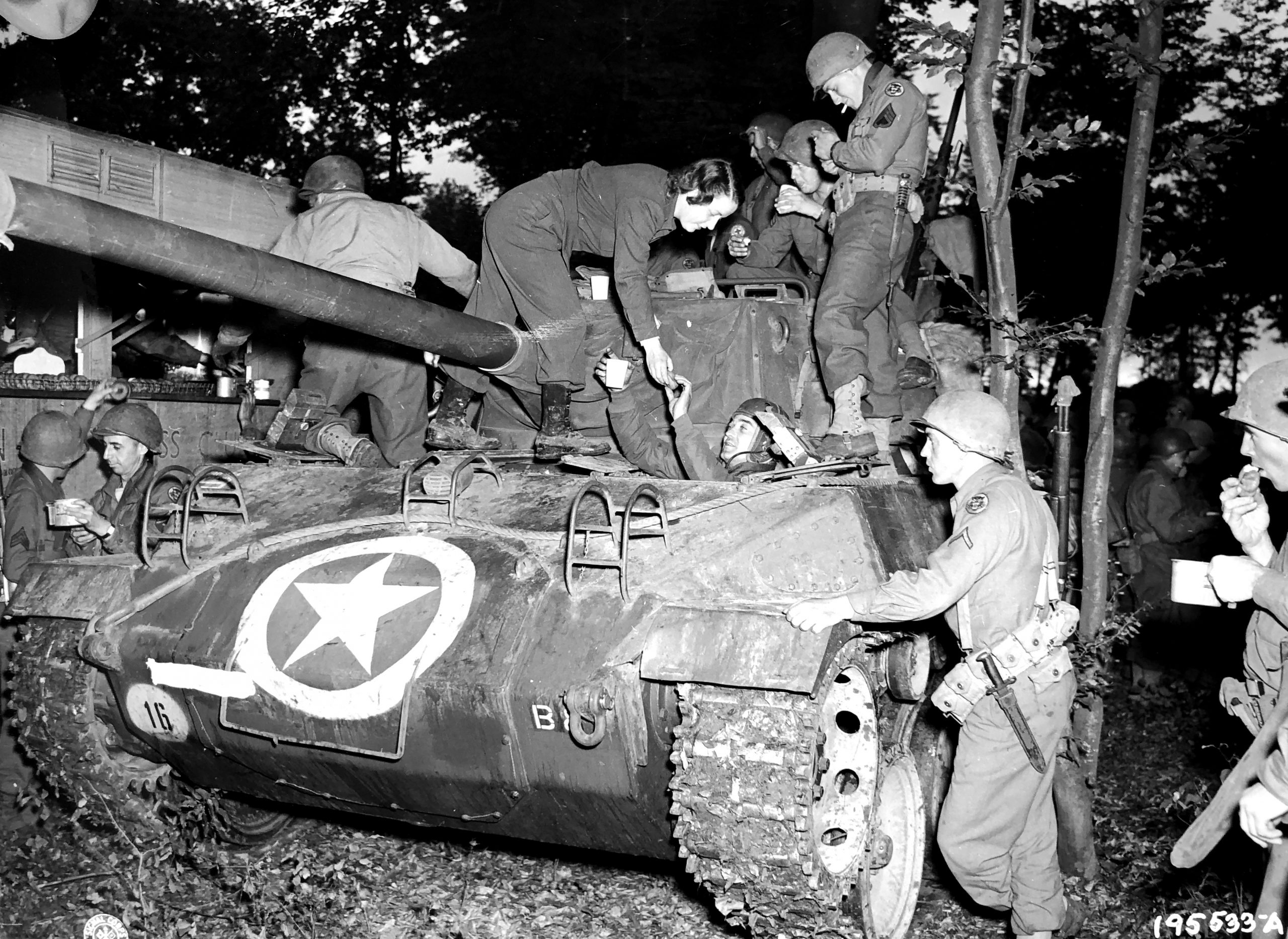 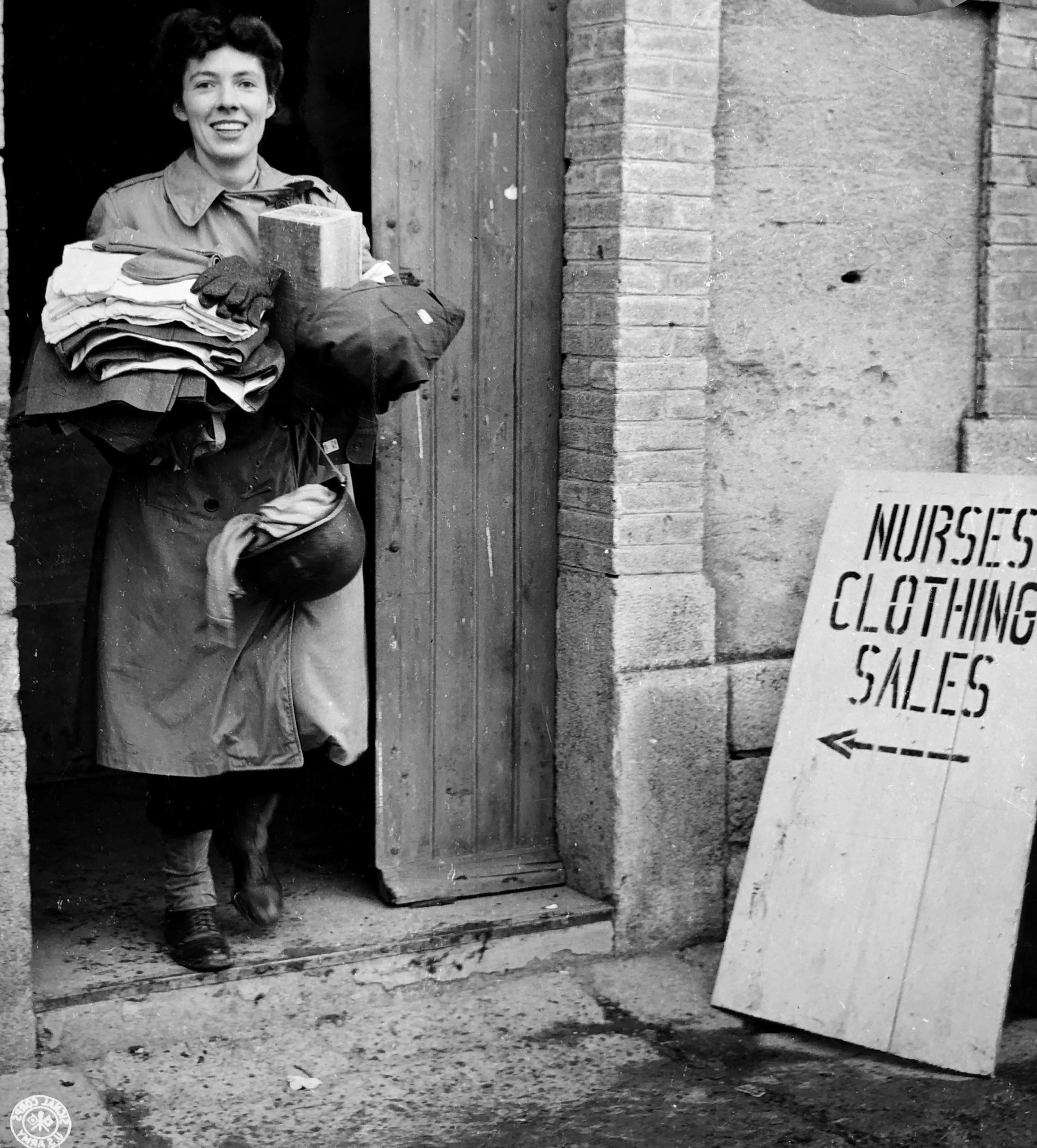 Sorry I have the caption but it is unreradable 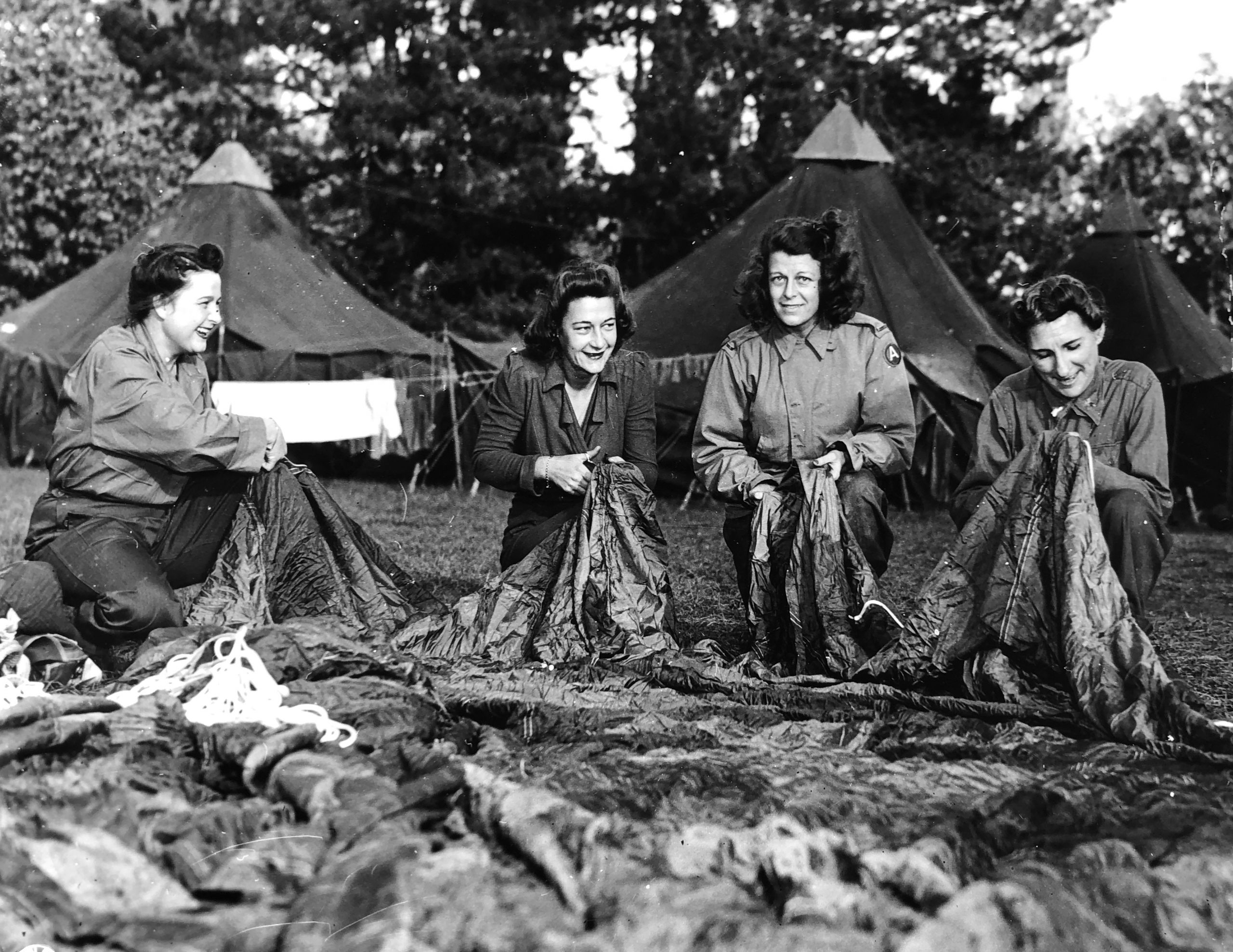 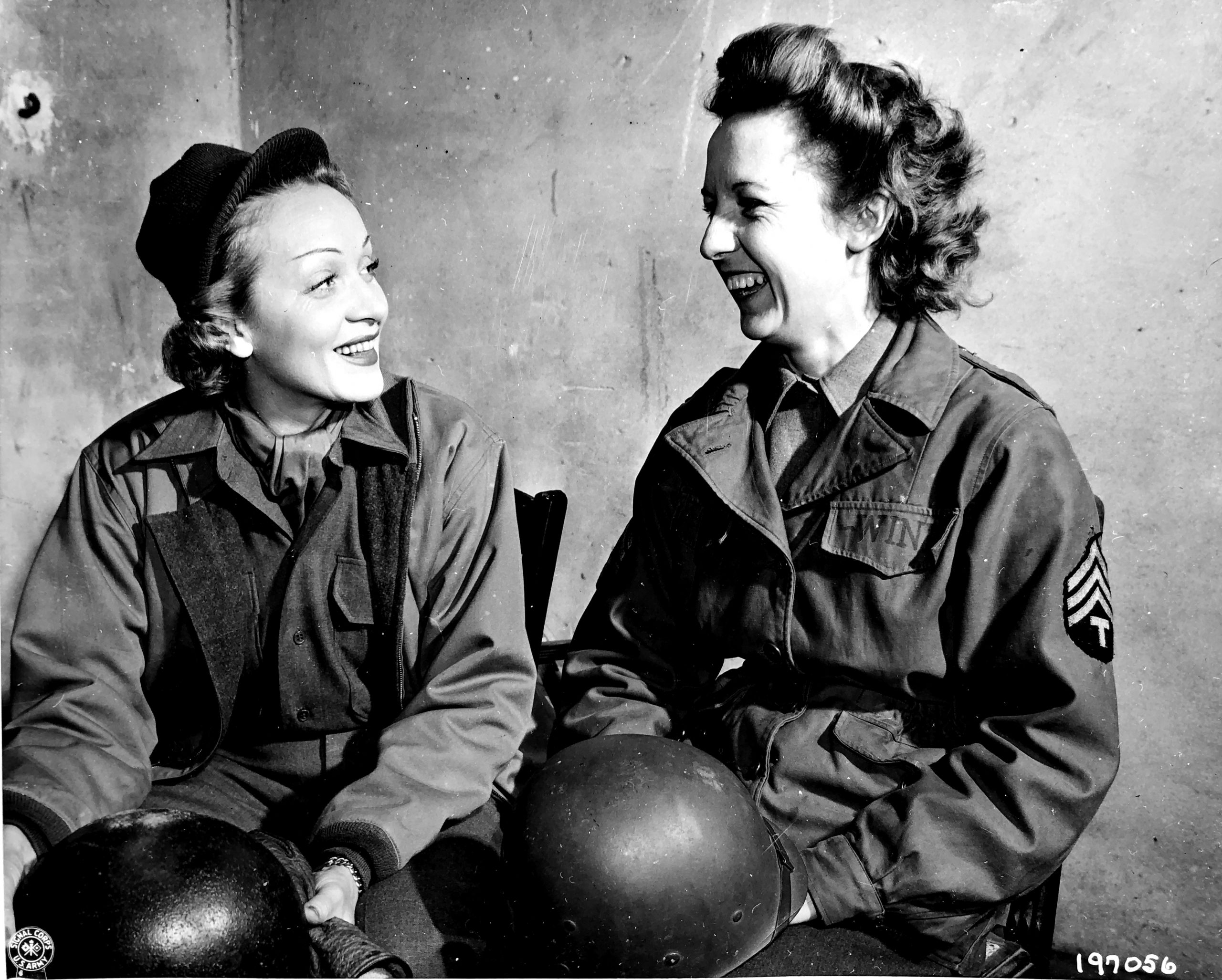 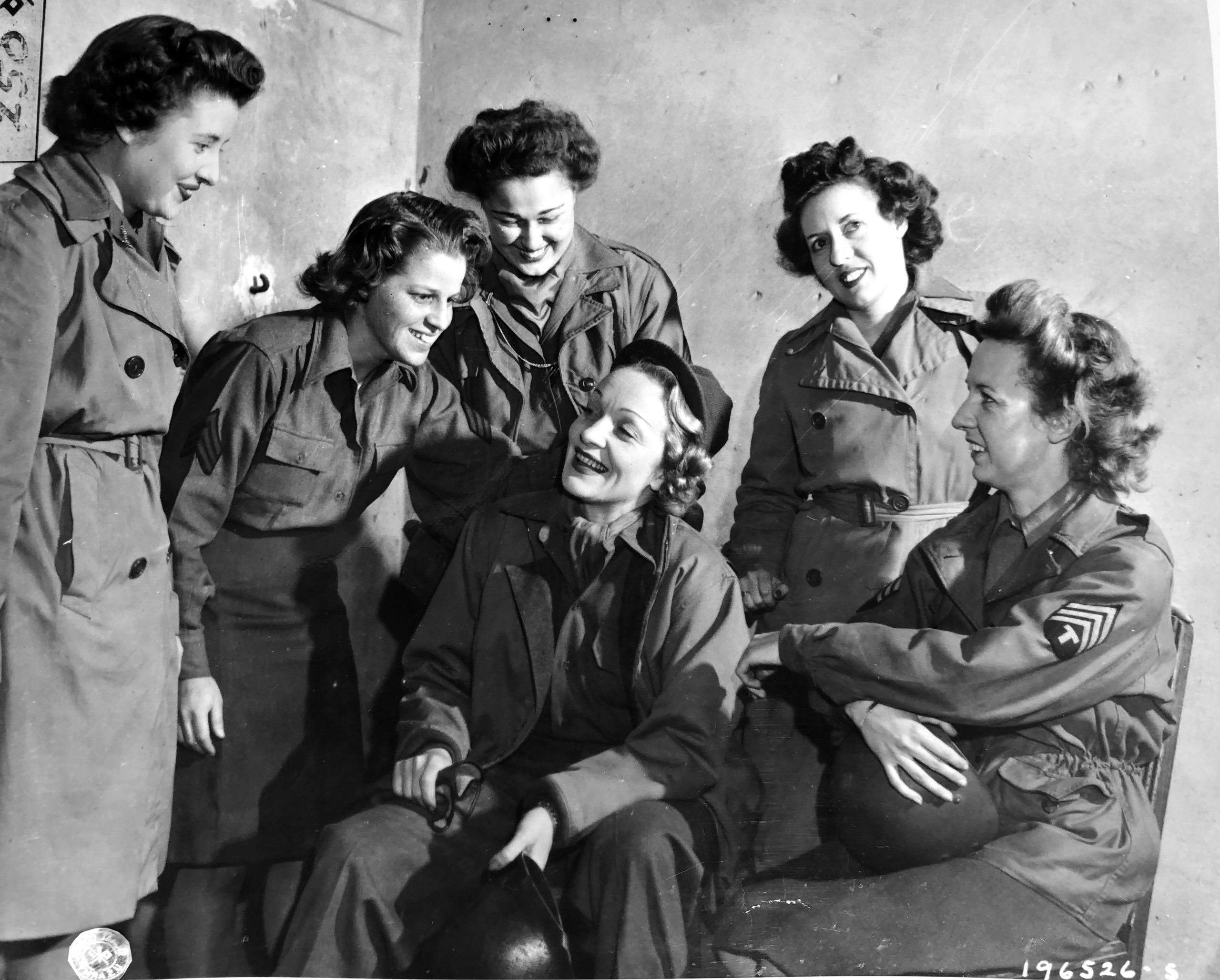 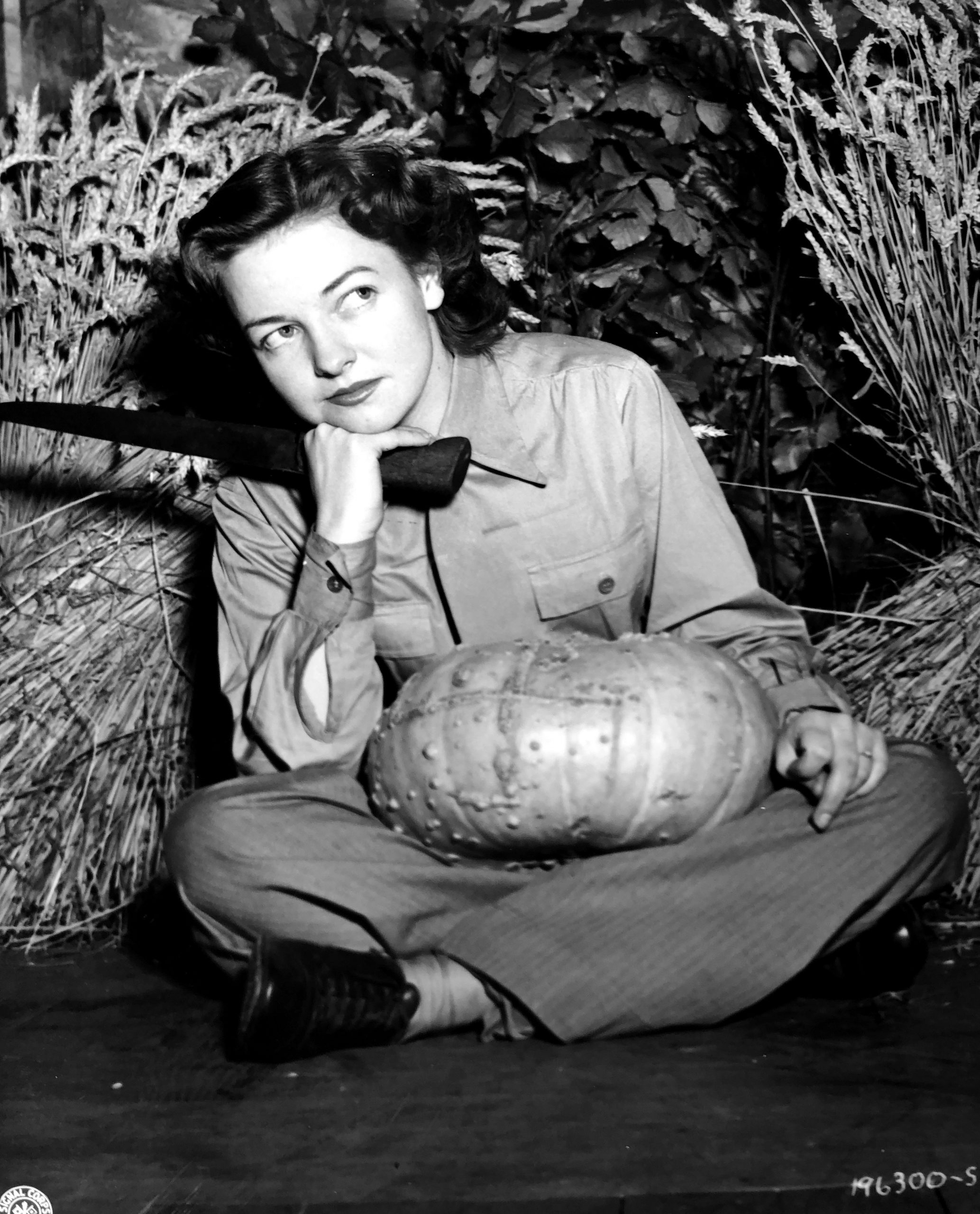 Germans carved swastikas into young pumpkins in France and the swastikas grew in size right along with the pumpins. Now that the harvest is on, there are huge piles of pumpkins, each bearing an ingrown swastika. Many of the pumkins have found their way into WAC mess halls and billets. Here, WAC Pfc Eddy Divine, Shelby, NC, gets ready to do a little fancy carving on Hitler’s emblem. 1944. 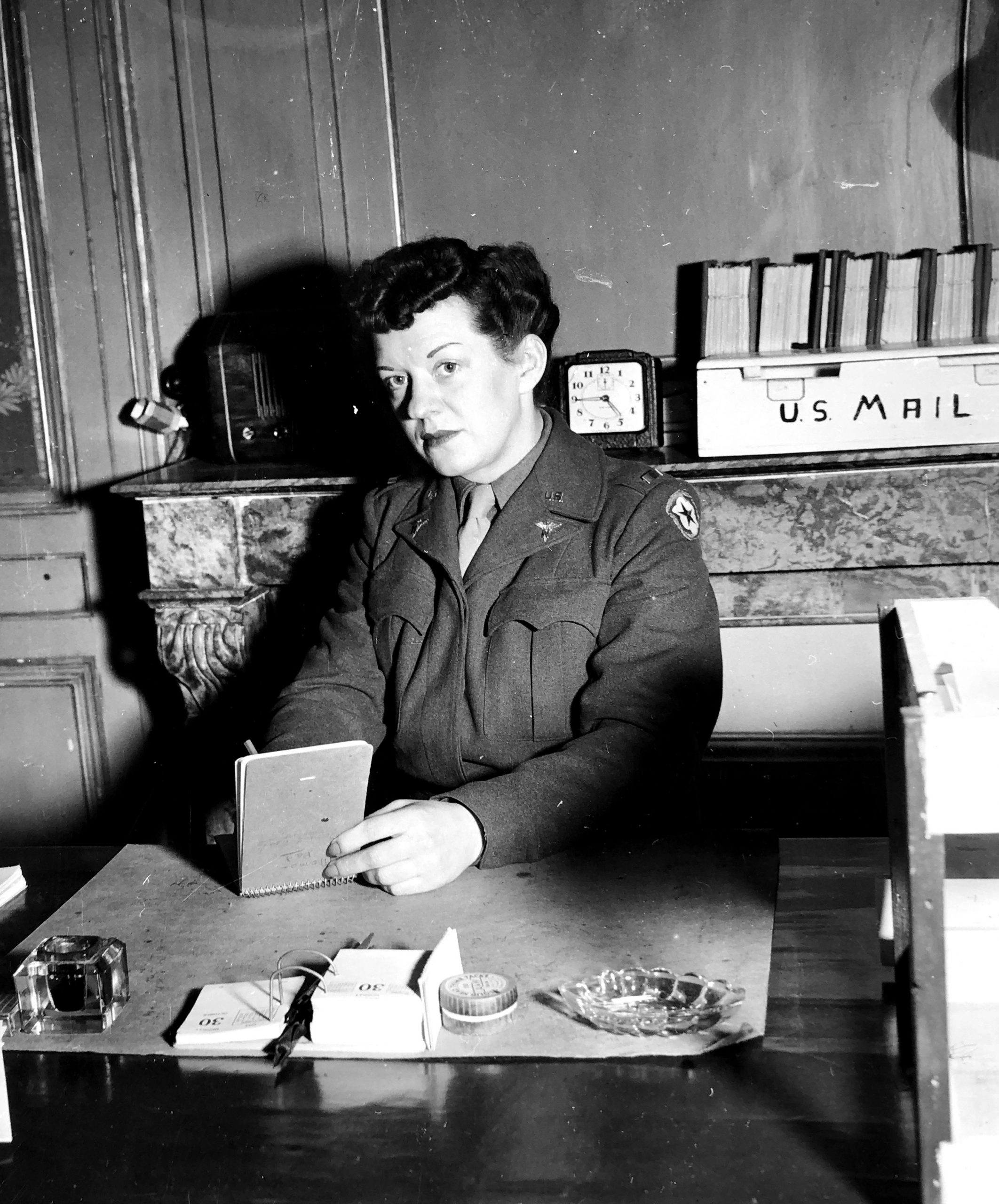 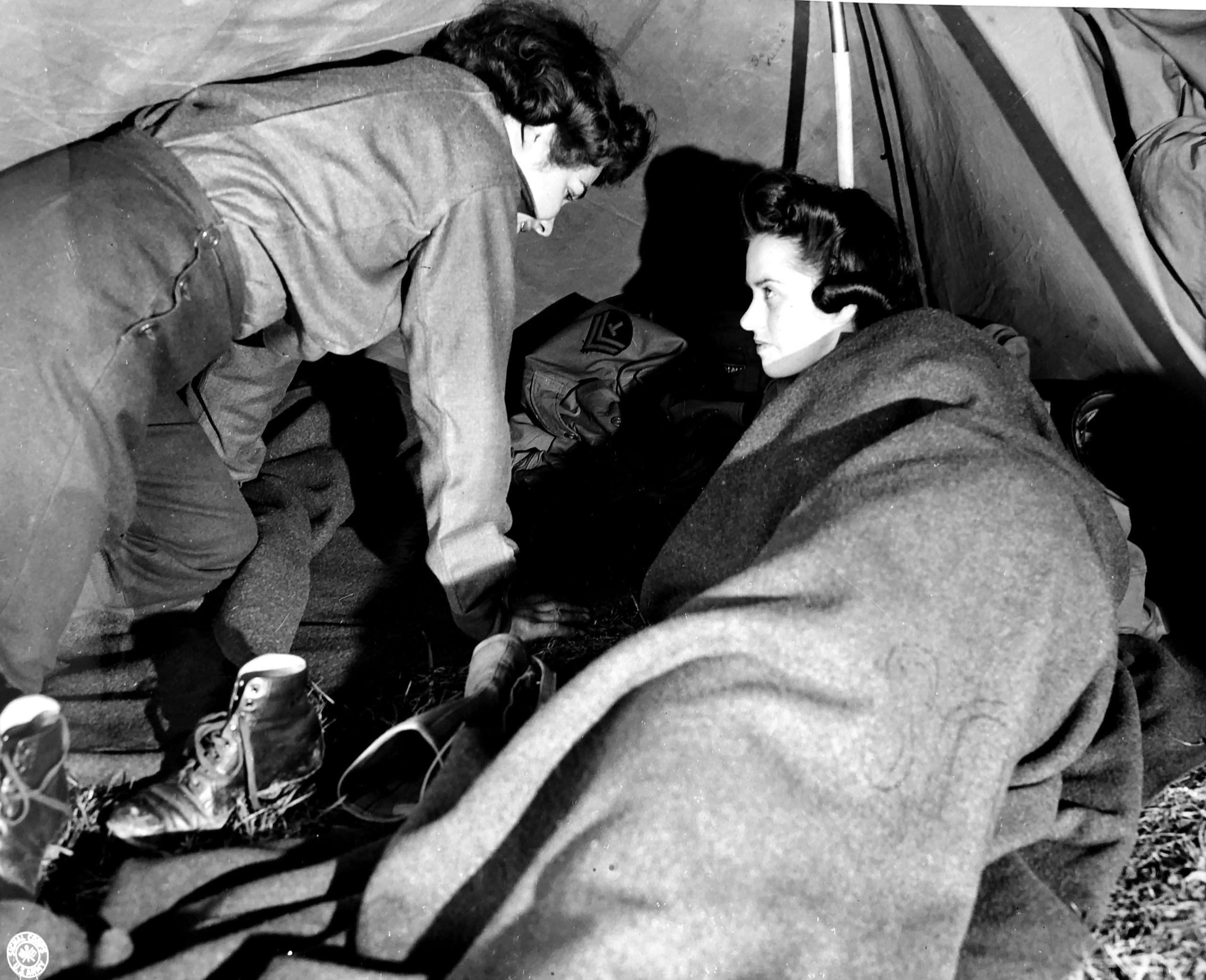 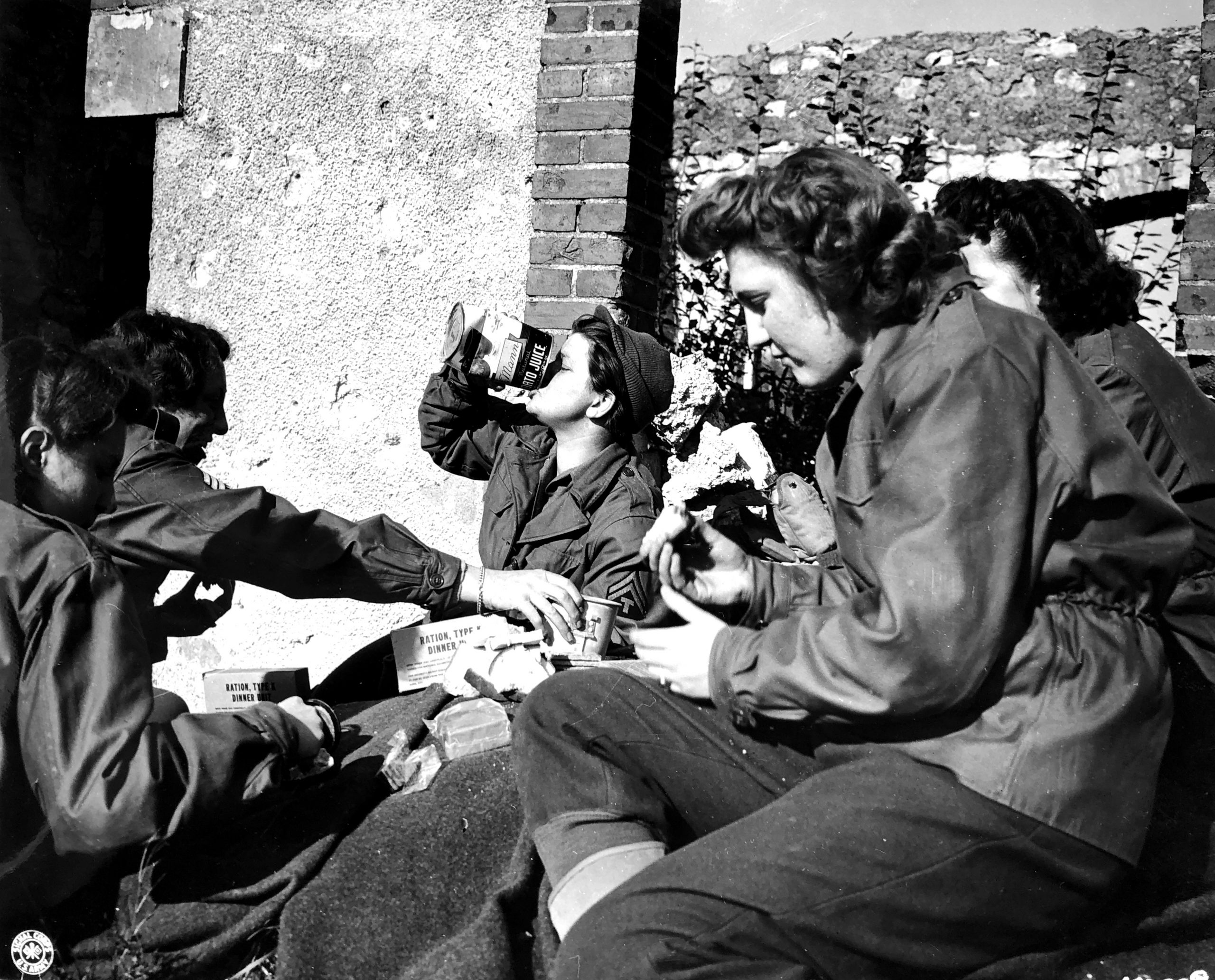 WACs eat K-rations and sandwiches while on bivouac in France. The girls are attached for work with and army headquarters. (WAC Detachment) 12-AG Hq. November 1, 1944 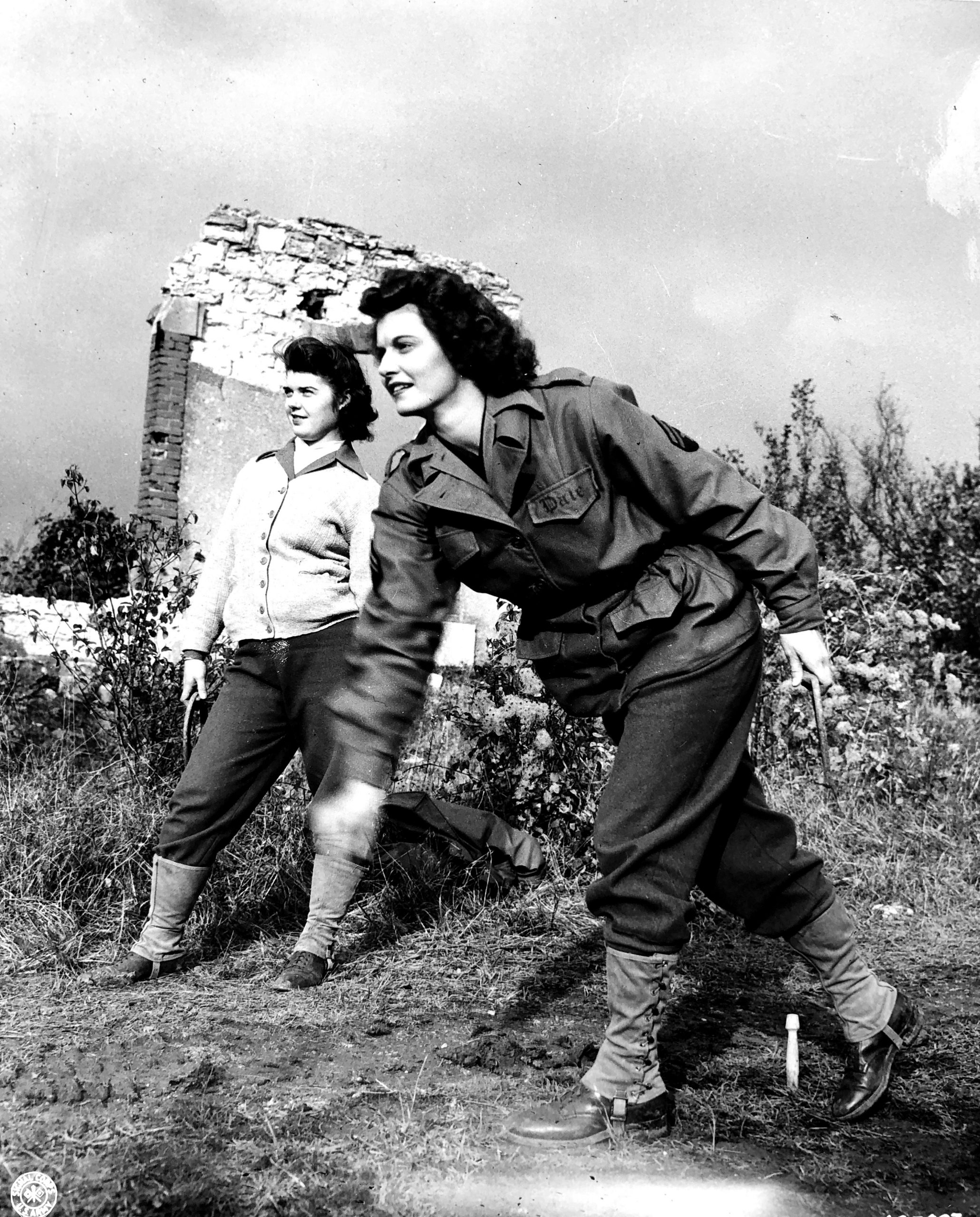 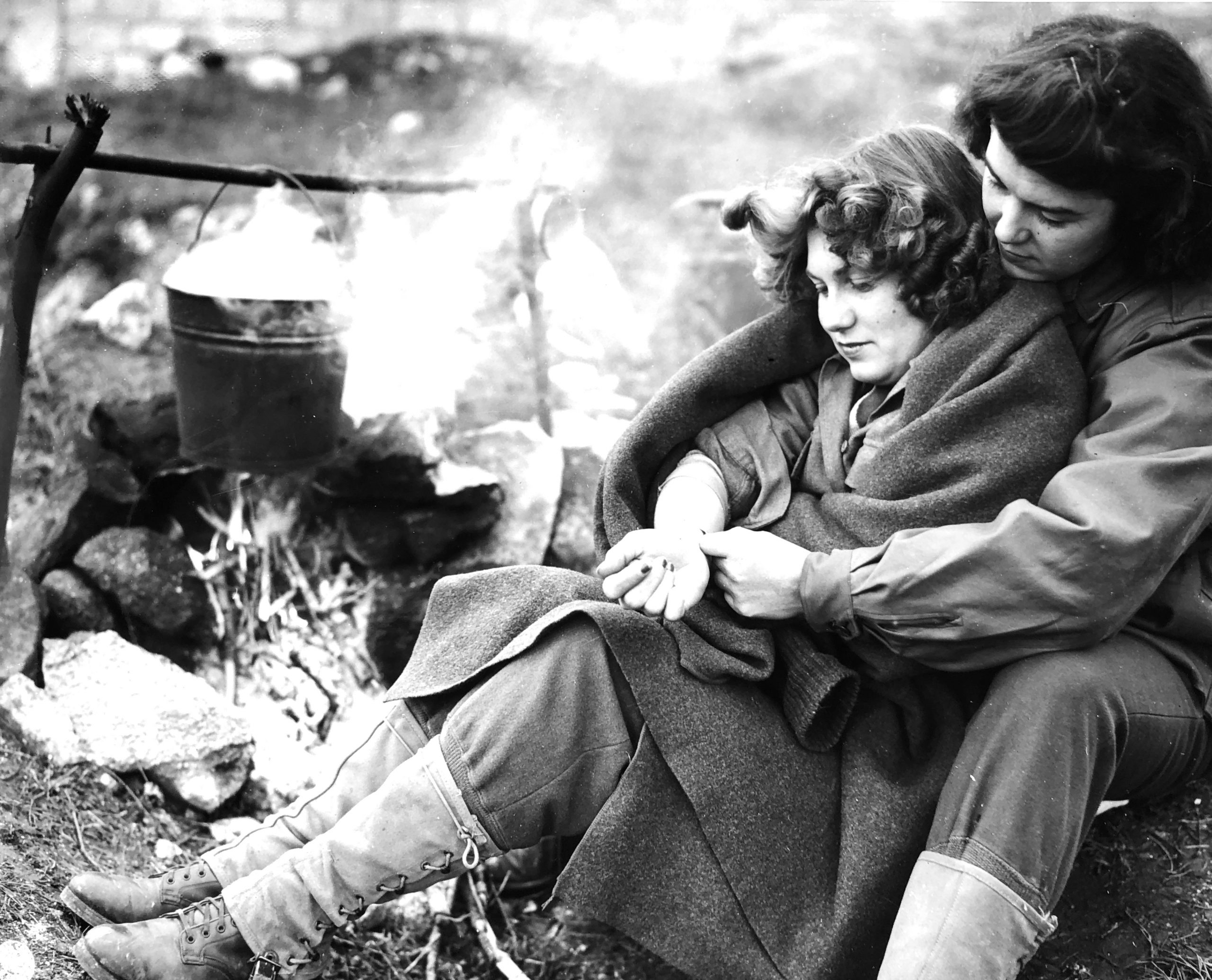 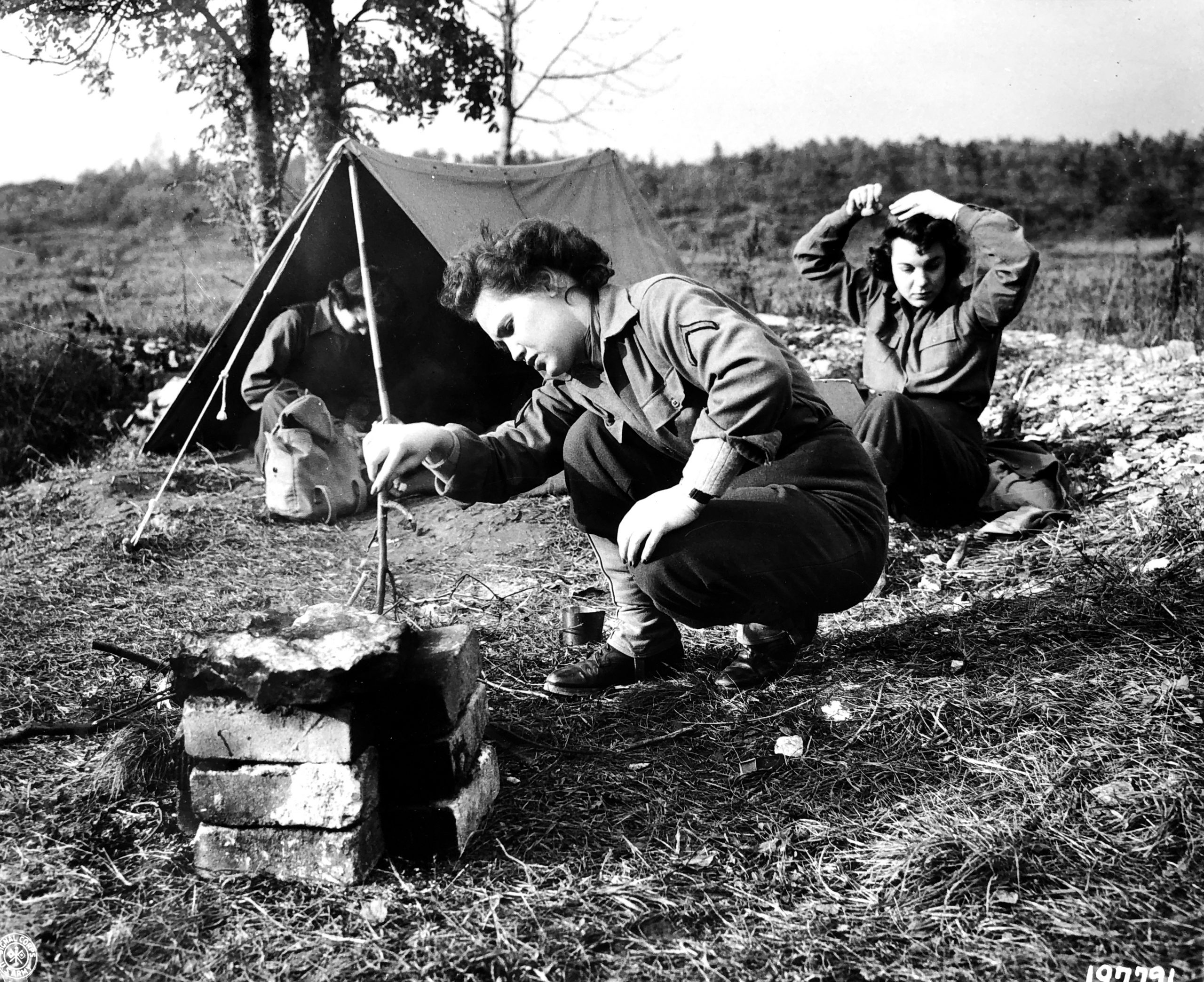 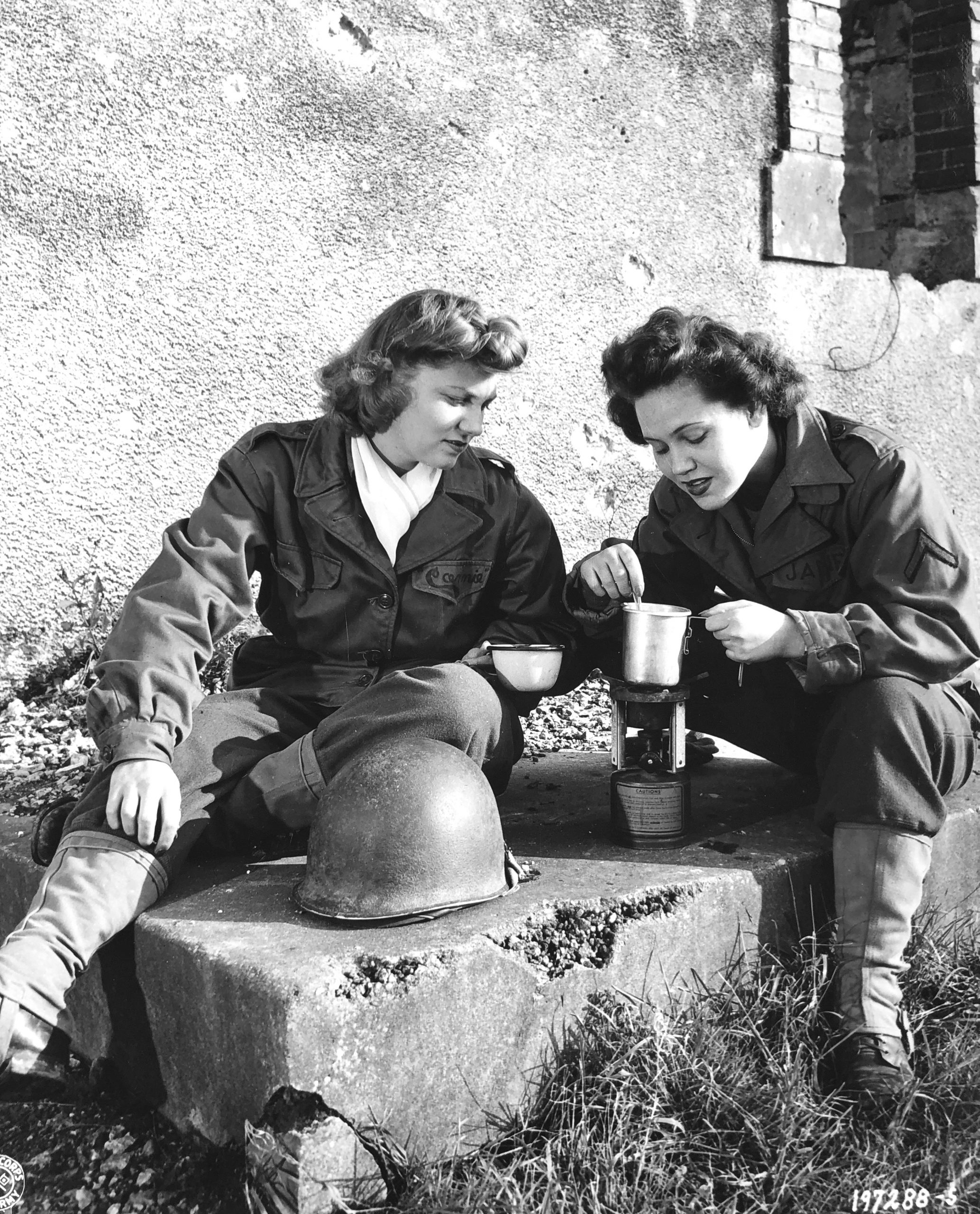 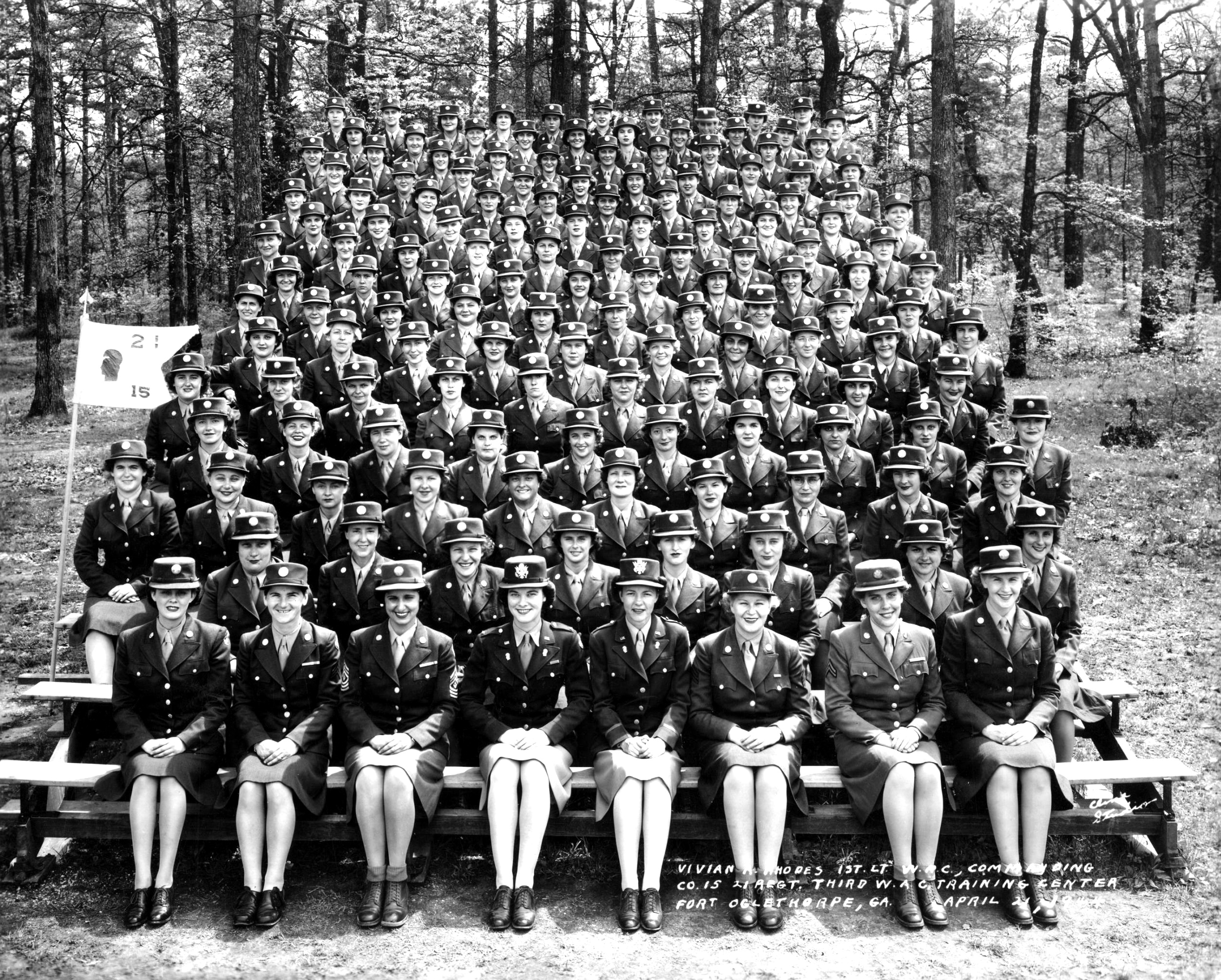 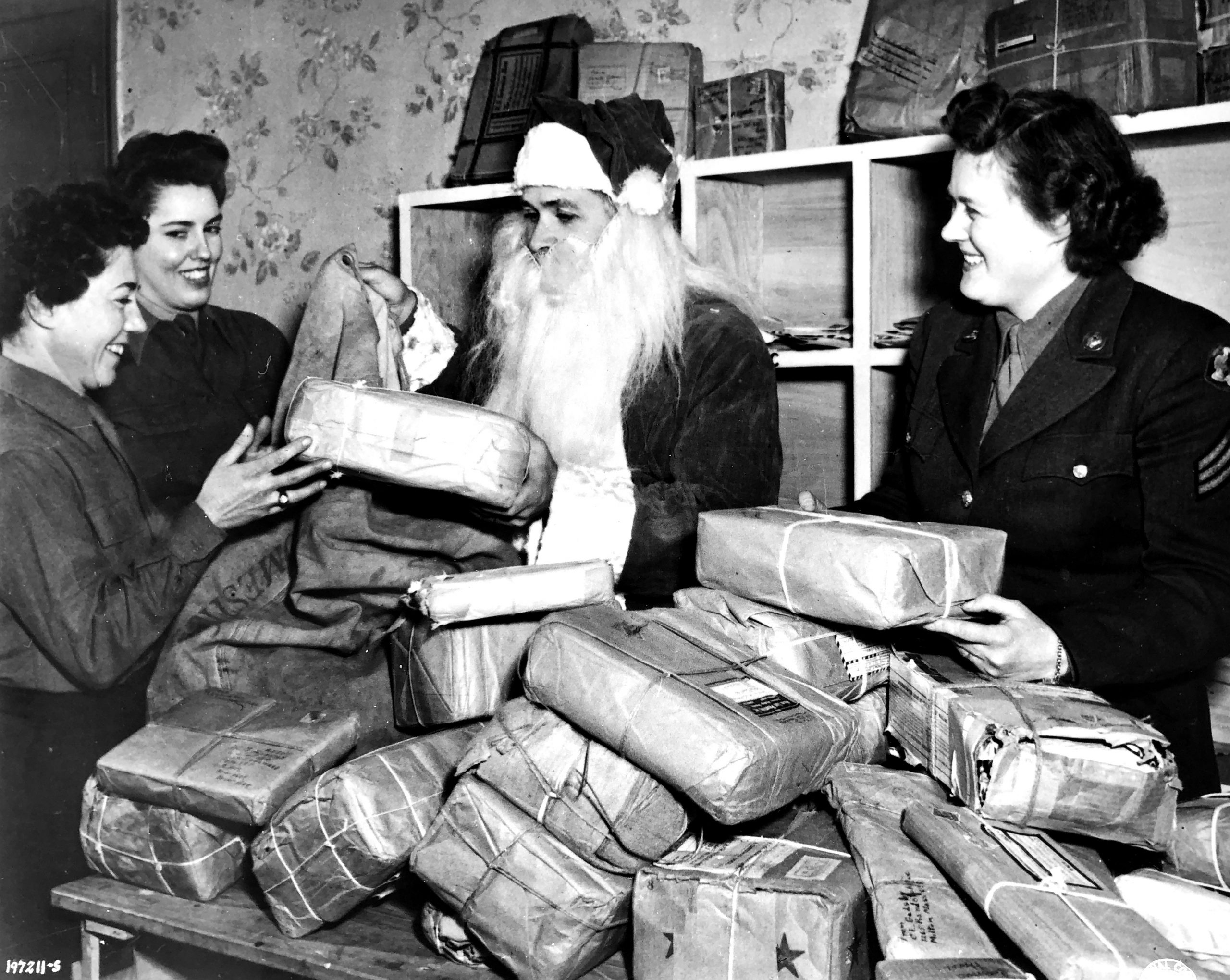 Pfc Nancy C. Wordell, left, 120 Moore St, Fall River, Mass, happily receives a Christmas package from home, delivered by the familiar symbol of Christmas, Santa Claus. Thousands of Christmas gifts are pouring into mail rooms similar to the one pictured above, all over France. Mail clerks, such as Pfc Eva J. Hensley, second from left, and Sgt Harriet M. Nowaczyk, right, work long hours sorting heavy loads of letters and packages to insure that every WAC will have her package from home on Christmas Day. ETO November 2, 1944 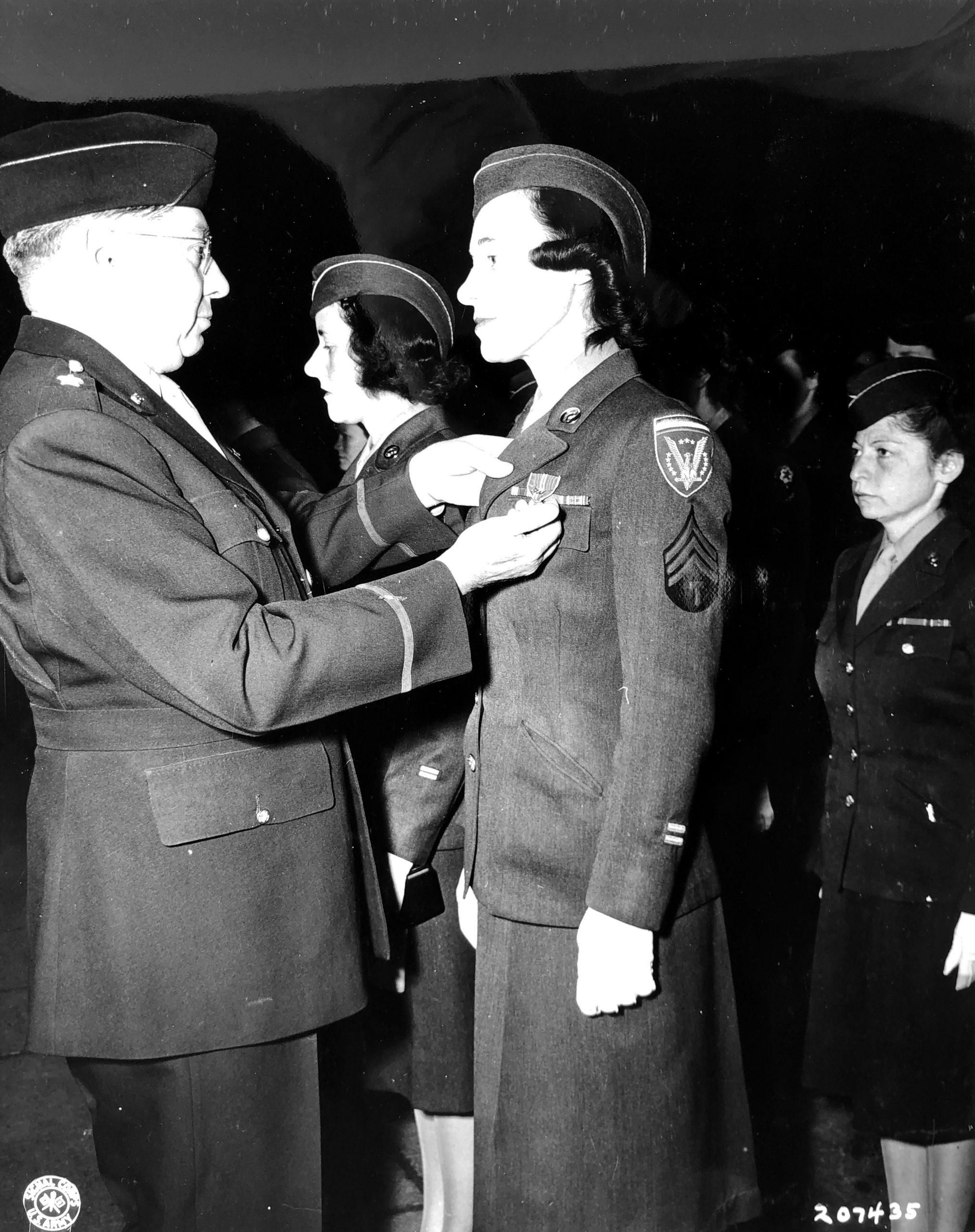 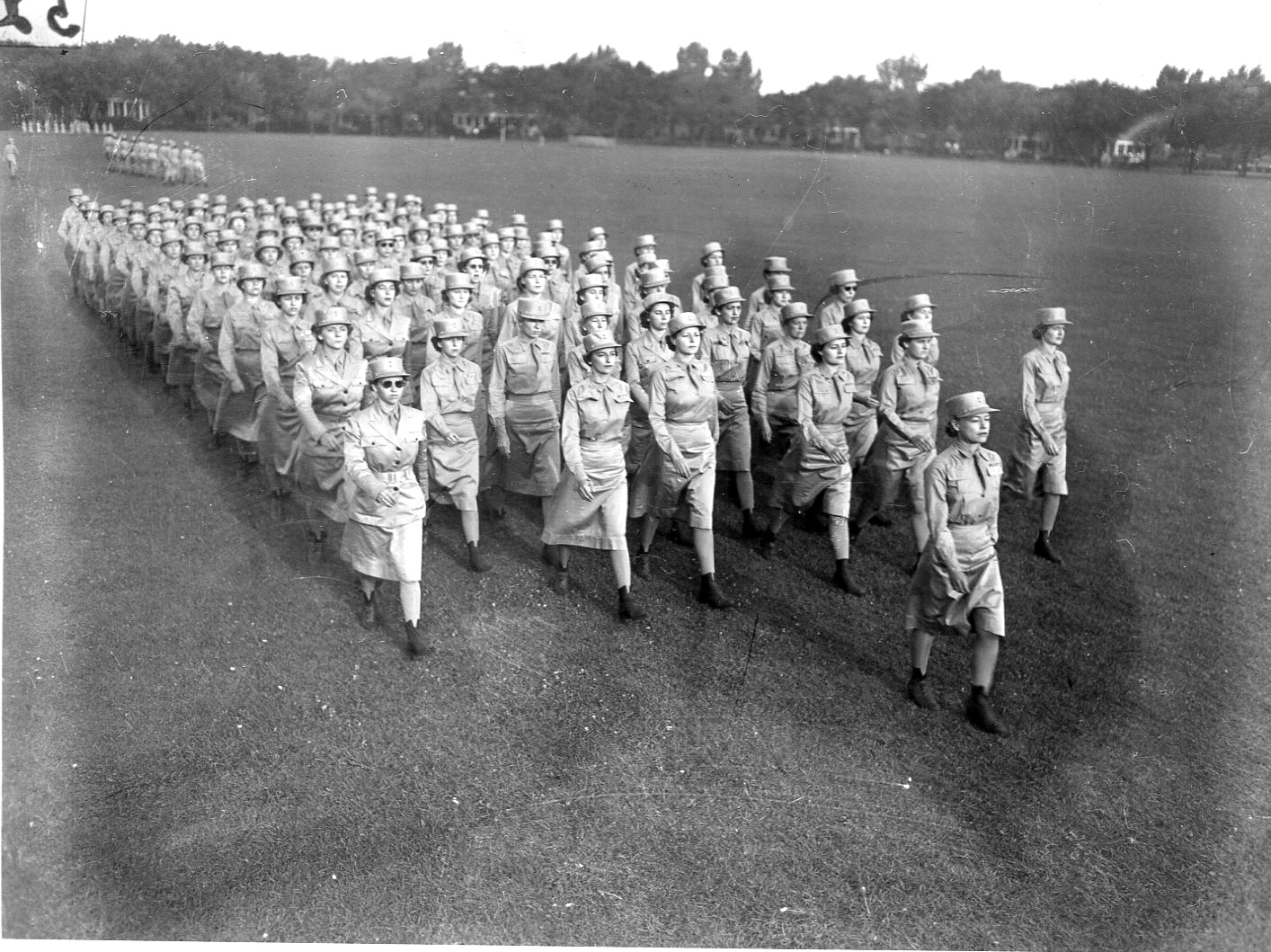 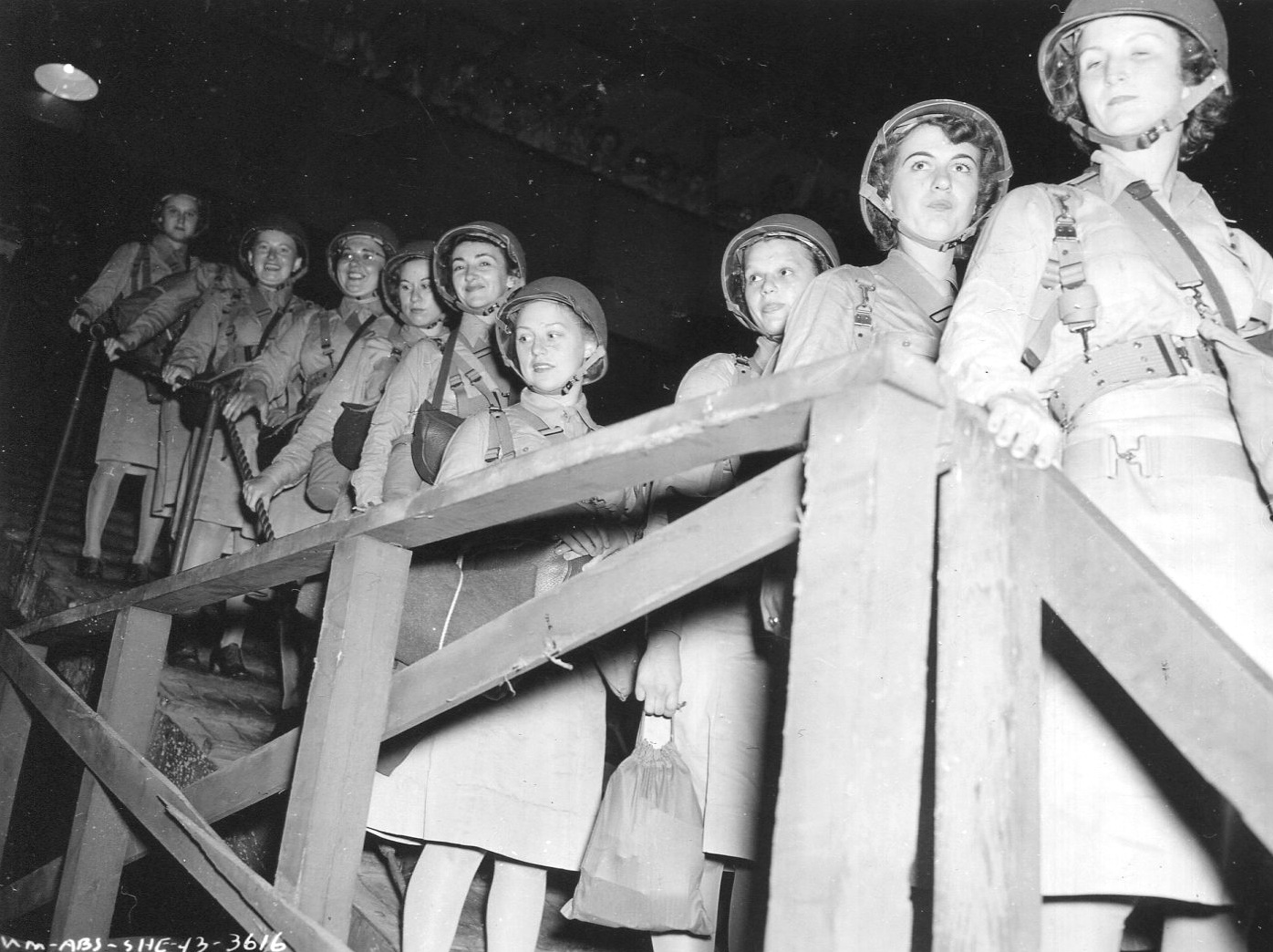 While many WACs remained in the United States during World War II, the Army deployed thousands overseas. Here a group of WACs disembark from a troopship at Casablanca, French Morocco, on August 6, 1943 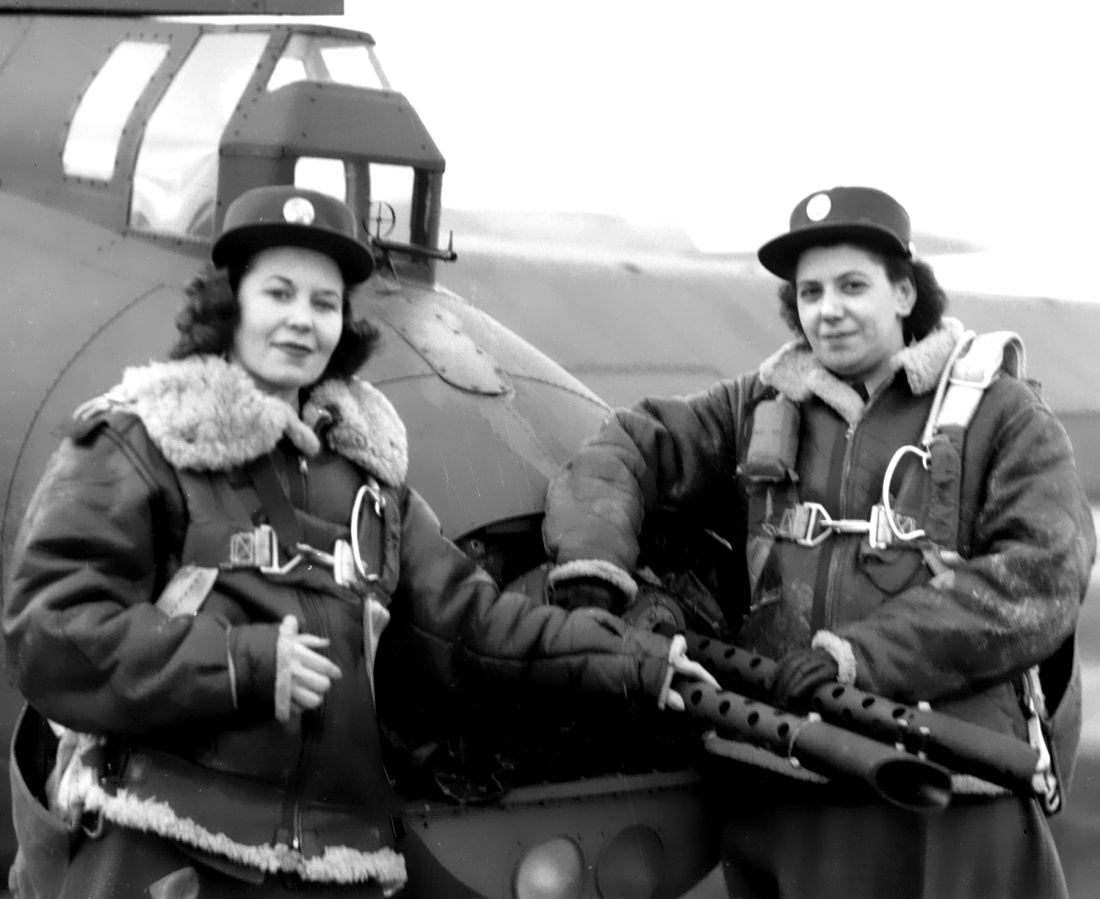 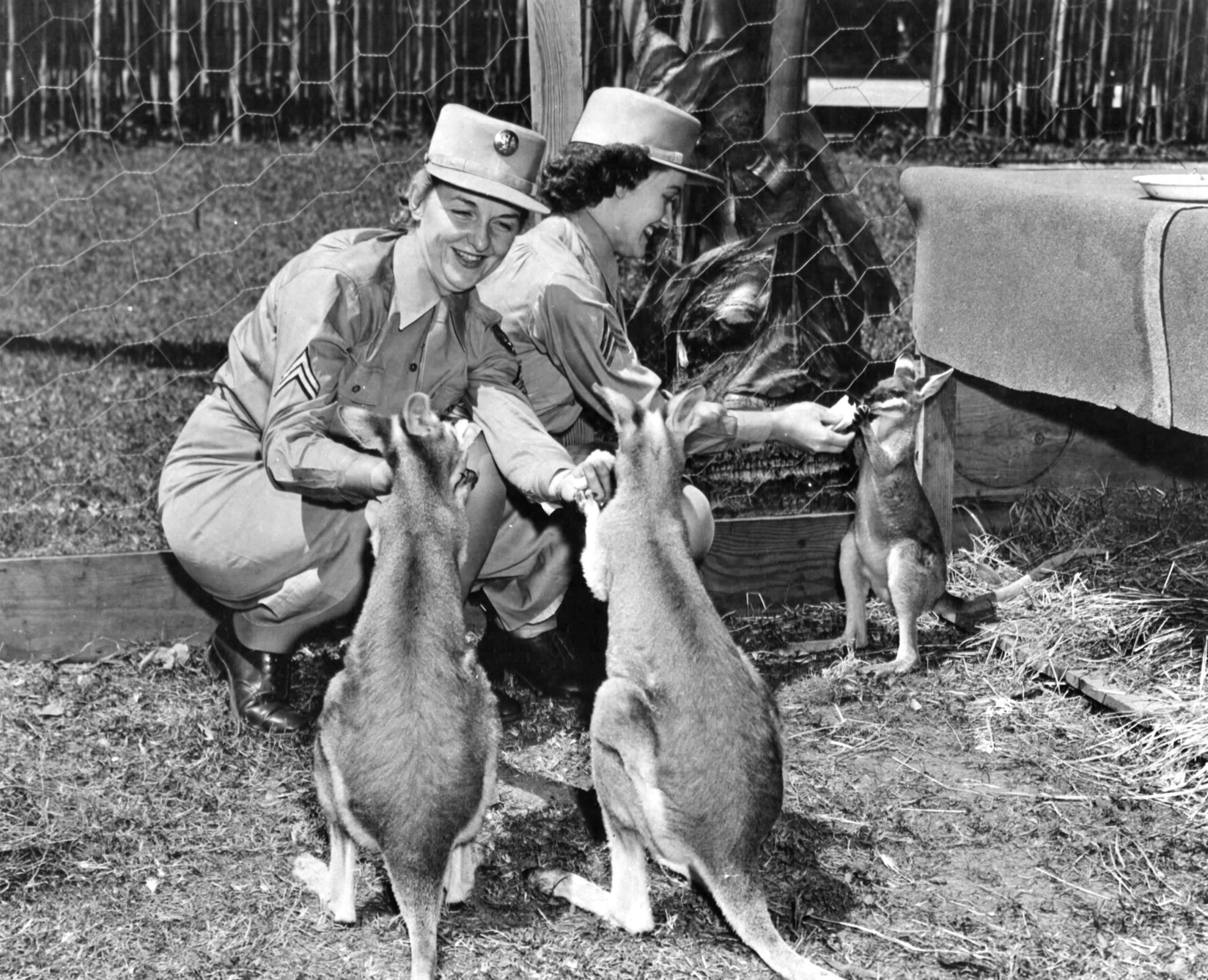 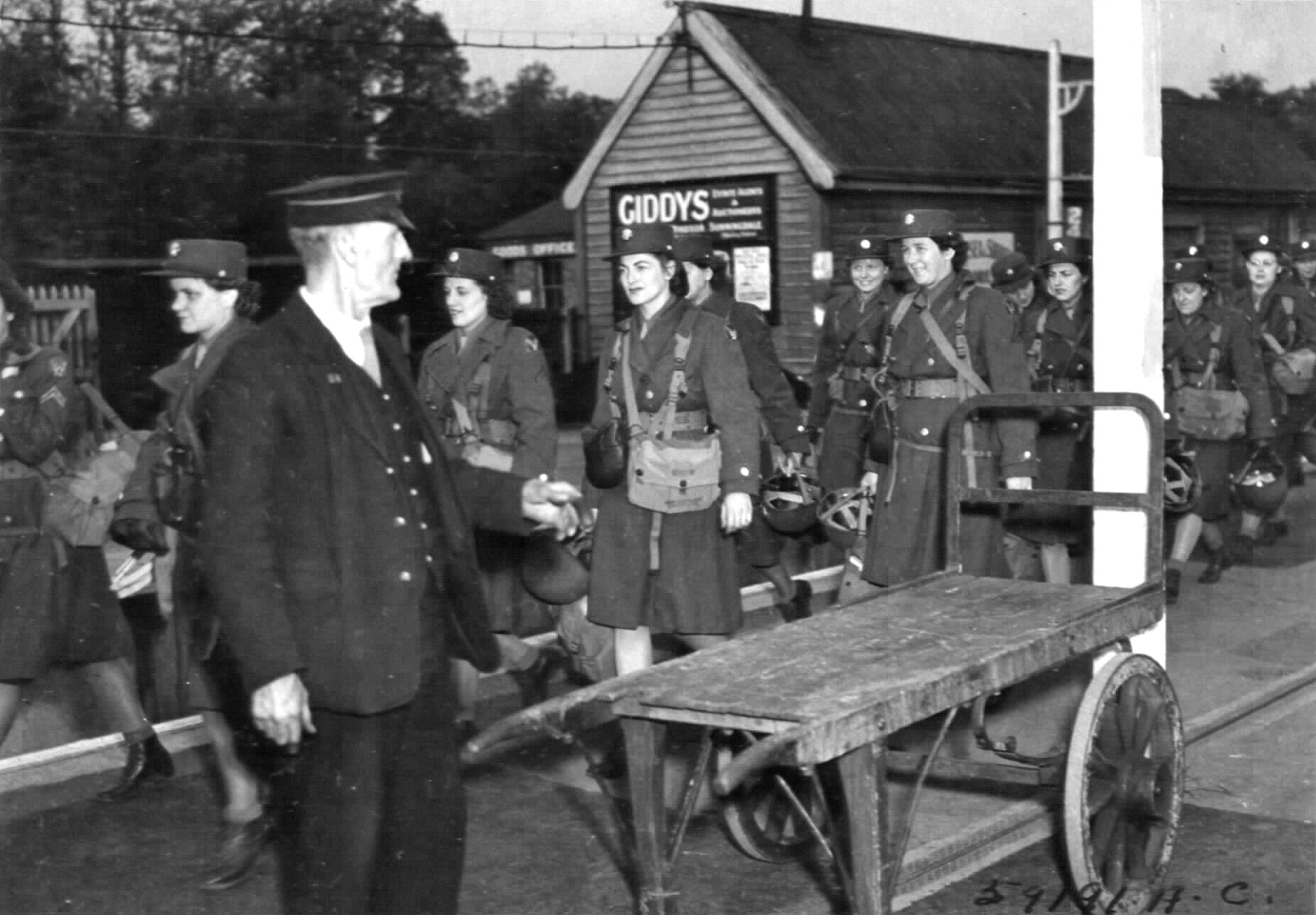 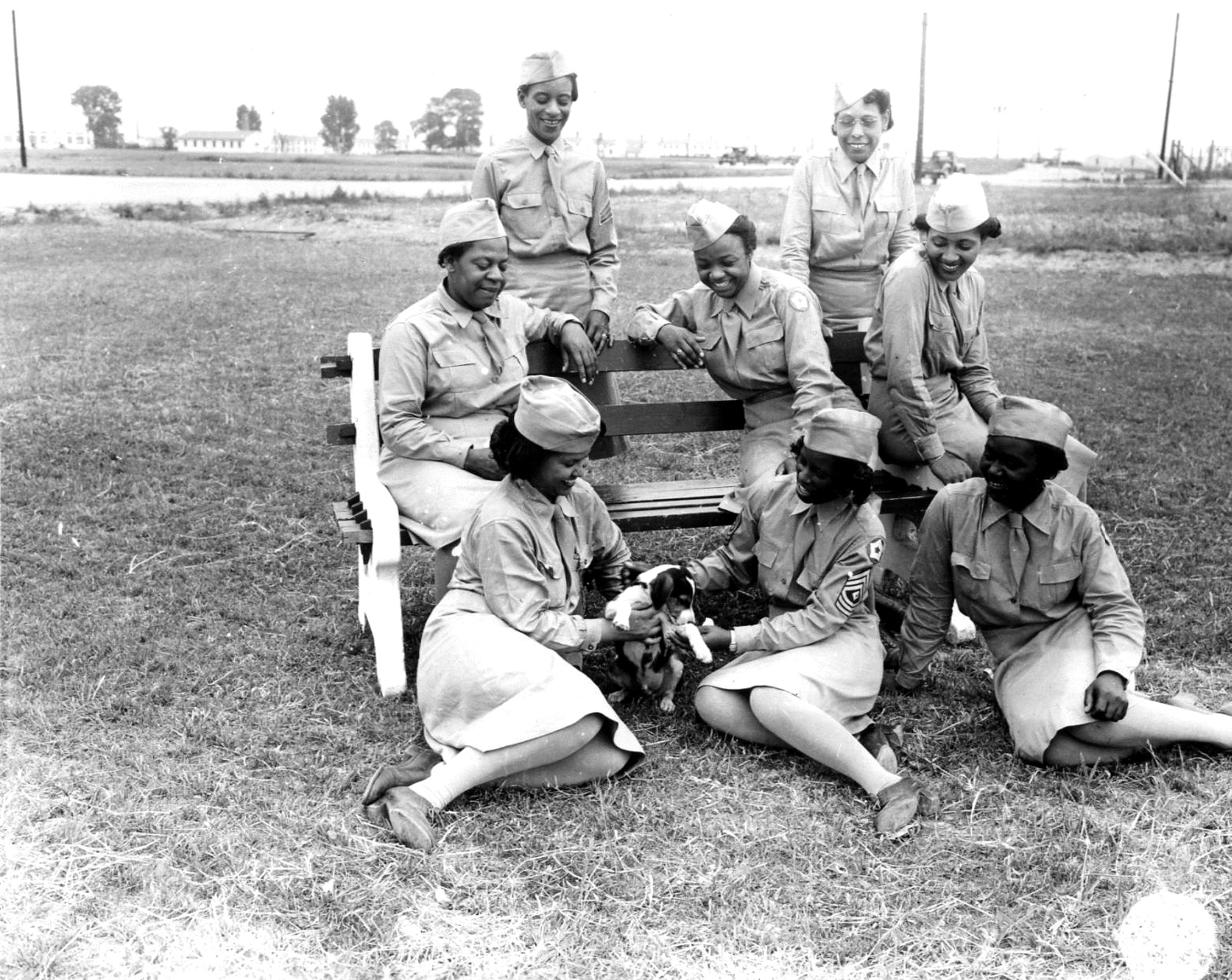 Eight servicewomen of the Medical Section, 3561st Service Unit, Women’s Army Corps (formerly Women’s Army Auxiliary Corps) playing outside with one of the small dog mascots, possibly “Corporal Khaki”, kept by the WACs at Camp Atterbury, Indiana. The Medical Section of the 3561st Service Unit was composed of African-American women who worked as ambulance drivers, ward attendants, clerks, typists, librarians, and medical assistants and technicians in the Station Hospital 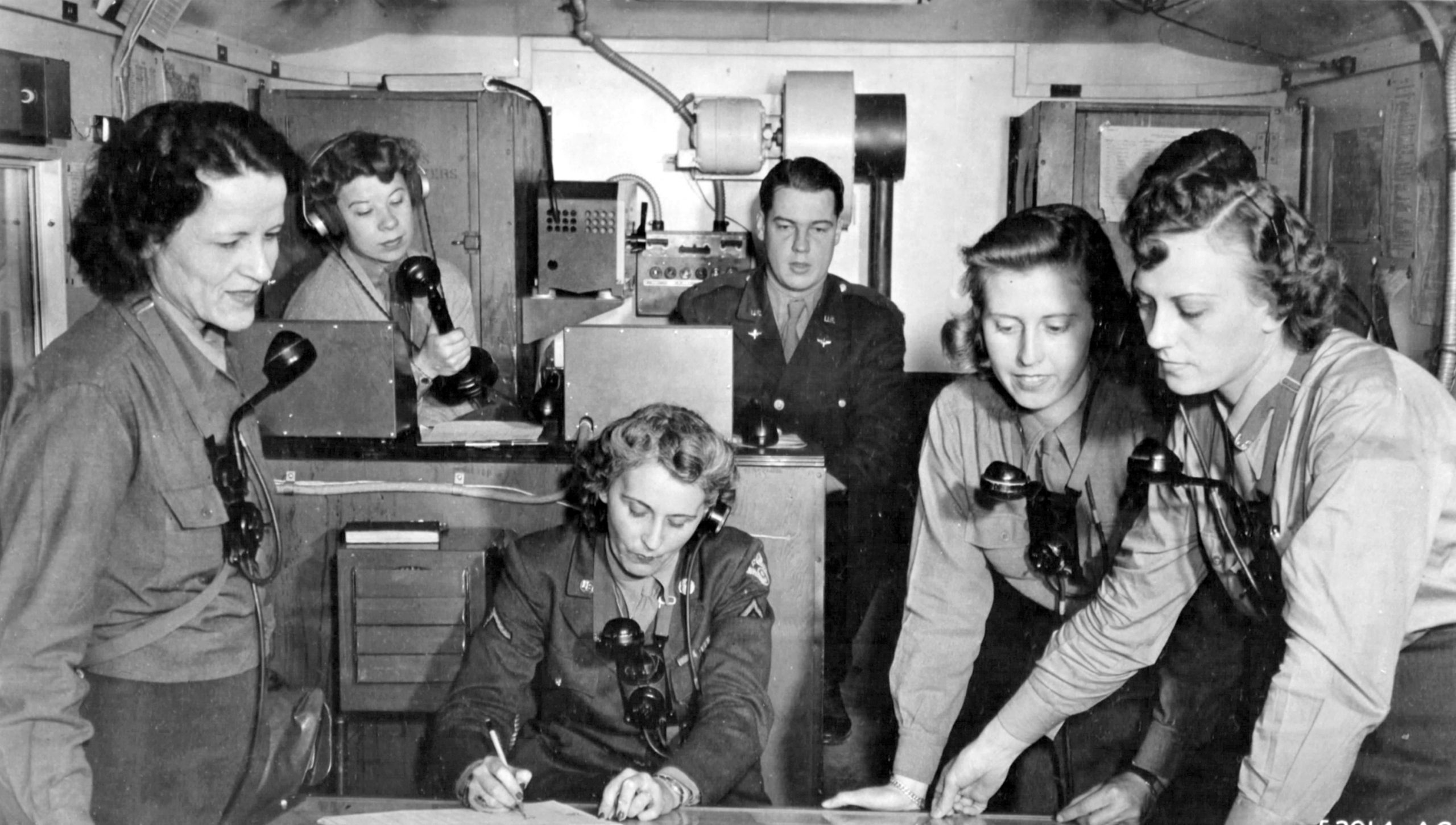 In England, bombers returning from missions over Germany which have been damaged or have lost their bearings receive new directions from these WACs in a mobile control unit truck. The WACs standing around the table are plotters who by means of strings track the course of the plane on an operational map. The WAC in the background is the controller’s clerk. The officer is the controller whose job it is to maintain direct communications with the pilot, the course of whose ship the WACs are plotting. Left to right, they are: Pfc Llewellyn Grayson of Philadelphia; Cpl Emily Fisher of Boston, Ohio; Pfc Doloris Beauchamp of Waltham, Massachusetts; 2/Lt William Arnold; T/5 Ethel Robson of Staunton, VA; and Sgt Susie Kercheval of Marion, Indiana. 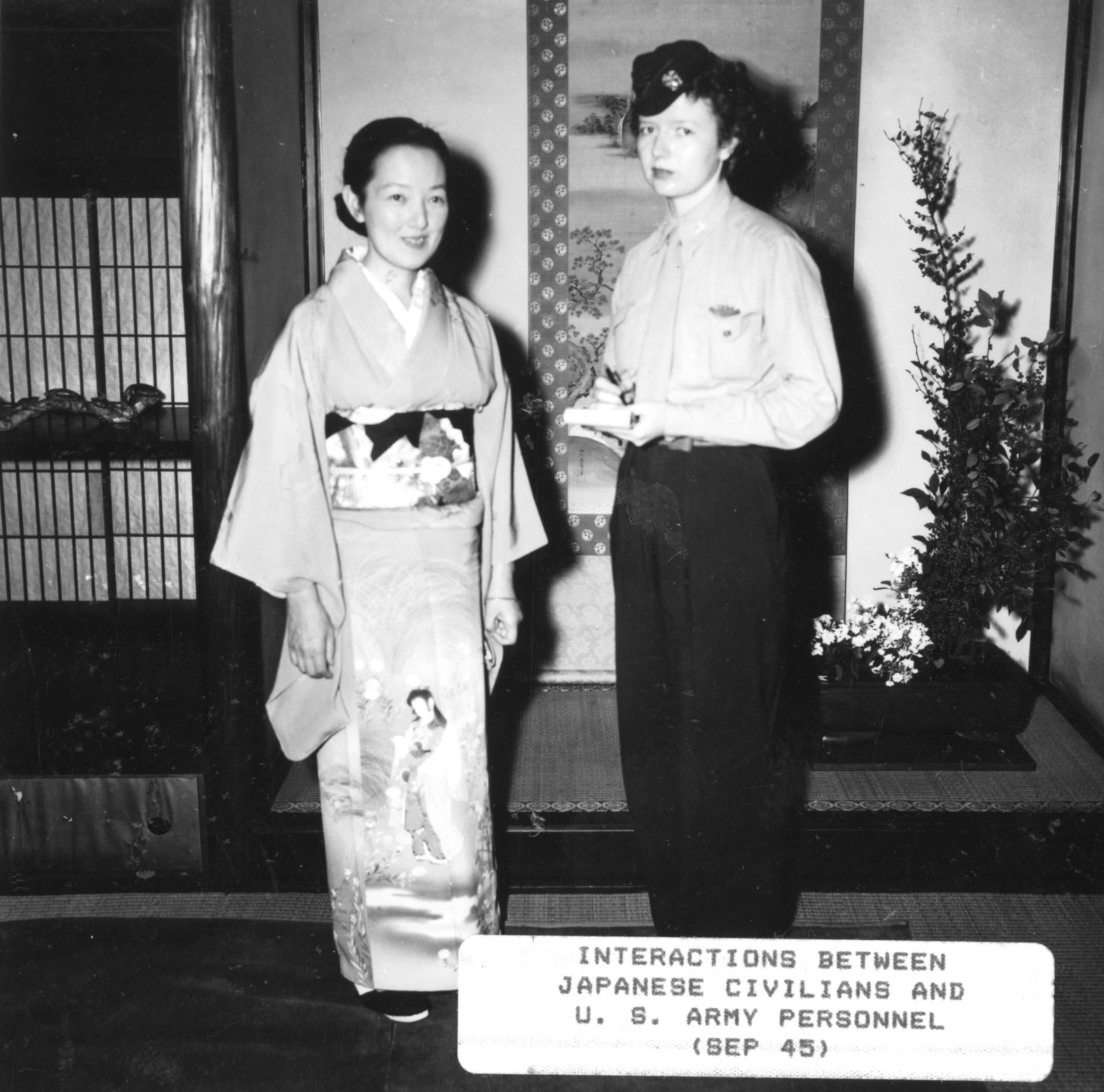 If you can add more infos to this archive (potos, texts, diaries), use the form below.