At the beginning of 1945, less than eight months remained before the final surrender of Japan. Those eight months, however, were to see some of the bitterest fightings of the war. Although the final outcome was no longer in doubt, when and how the conflict would end remained unclear. The American naval blockade of Japan combined with a growing air offensive was placing a serious strain on Japan’s economy. Yet any invasion of the Japanese home islands would most likely be drawn out and extremely costly in lives. 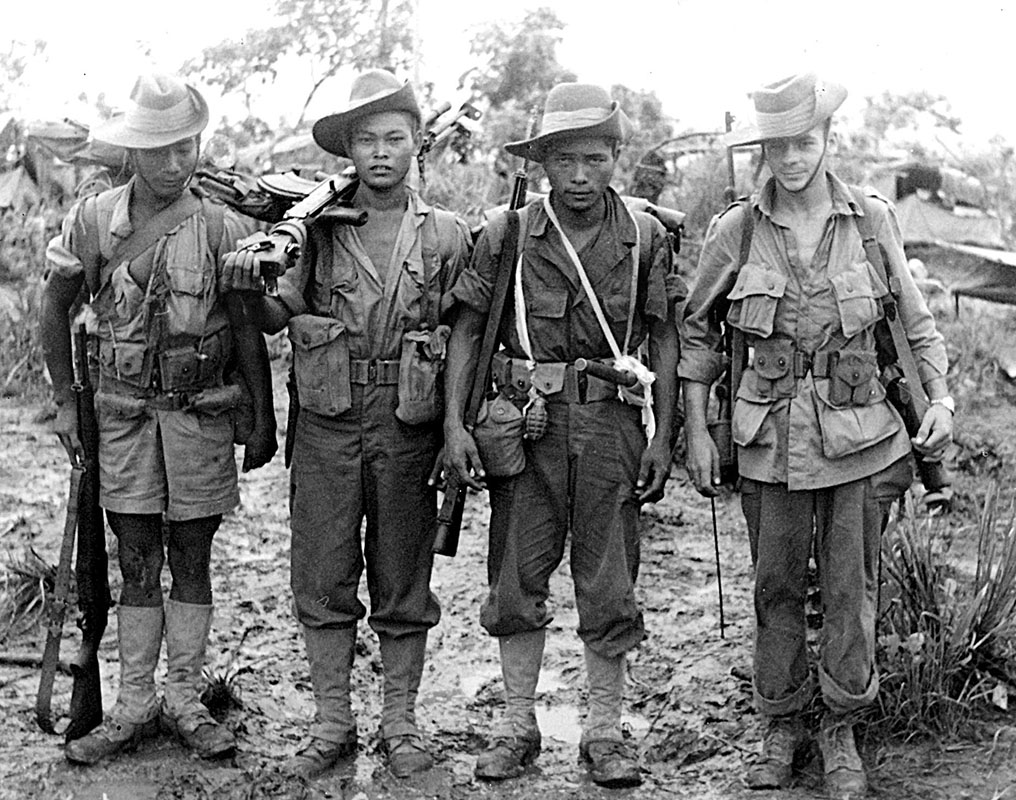 The hope Americans held in the early stages of the war that Chinese manpower and bases would play a vital role in the defeat of Japan was unrealized. Americans sought to achieve great aims on the Asian mainland at a small cost, looking to the British in India and the Chinese, with their vast reservoirs of manpower to carry the main burden of the ground conflict. Neither proved capable of exerting the effort the Americans had hoped.

Early in 1942, Gen Joseph W. Stilwell arrived in the Far East to command American forces in what became the China Burma India theater and to serve as chief of staff and principal adviser to Gen Chiang Kai-shek, the political and military leader of Nationalist China. Stilwell’s mission was to improve the efficiency of Chiang’s army which had been fighting the Japanese since 1937 and to keep China in the war. But the Japanese conquest of Burma, later in 1942, cut the last overland supply route to China and frustrated Stilwell’s plans. 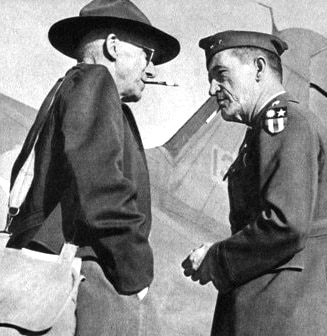 The flow of supplies to Chiang’s armies thereafter depended on a long and difficult airlift over the high peaks of the Himalayas from northeast India to the main logistical base at Kunming in southwestern China.

Stilwell thought, as did the US Joint Chiefs of Staff, that the first order of business was to retake Burma and reopen the land supply line to China.

To realize that goal, he undertook the equipping and training of Chinese troops in India, the X Force, which eventually would grow to five divisions. In the meantime, he sought to concentrate an even larger force in southwest China, the Y Force of twenty-five Chinese divisions. If both X and Y Forces could be given offensive capabilities, a joint operation between them could squeeze the Japanese out of northern Burma and reopen the landline to Kunming. 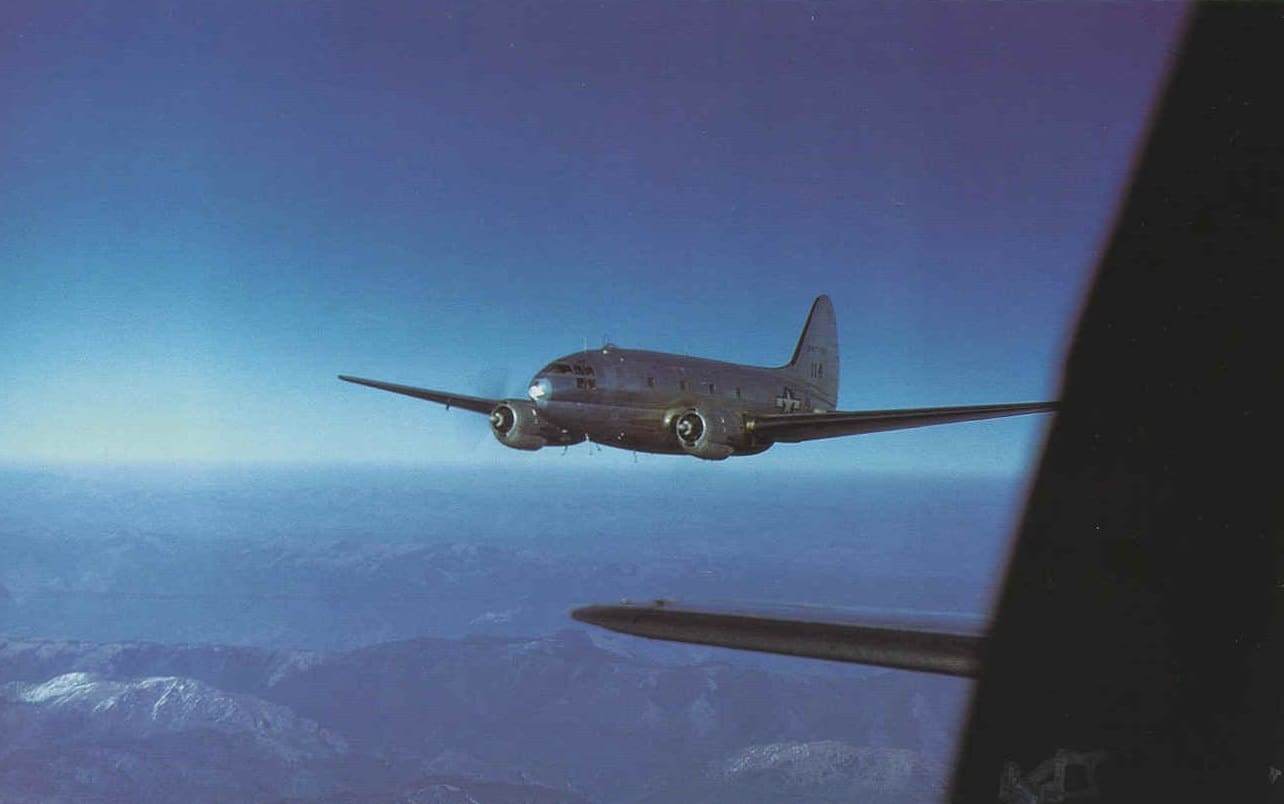 Stilwell’s hopes for the northern Burma offensive were part of a larger Allied plan for the reconquest of Burma. Although the overall design was approved by the US and British Combined Chiefs of Staff at the Casablanca Conference in Jan 1943, the limited resources available to the theater discouraged immediate action. Moreover, Gen Lee Claire Chennault of the Flying Tigers fame, then commanding the recently formed 14-USAAF in China, urged that the Hump airline should be used to support his air force rather than to supply Chinese ground forces. At the Trident Conference in May 1943, US and British leaders approved a new plan that stressed Chennault’s air operations while agreeing to conduct a limited ground offensive in central and northern Burma which would include the construction of a new road from India to join with the trace of the old Burma Road inside China.

Logistic difficulties in India, however, delayed the opening of any land offensive and kept the Hump airlift well below target figures. The landline ran from the Indian port of Calcutta 400 miles northeast to the British front near Imphal and then extended another 200 miles north to the Chinese X Force near Ledo. Lack of trained manpower and construction supplies delayed completion of the new supply route, the so-called

Ledo Road, which extended on into Burma. Until the initial sections of the Ledo Road were completed, both air and ground operations against the Japanese in northern Burma were severely handicapped.

Undaunted, Stilwell pushed two Chinese X Force divisions from Ledo toward Myitkyina, some 175 miles to the southeast, in Oct 1943. The advance was to be part of a larger offensive planned for early 1944 with the British 14-A attacking east from Imphal in India and the Chinese Y Force attacking west astride the old Burma Road toward the China Burma border, all under the overall direction of Lord Louis Mountbatten heading the new Southeast Asia Command. Anticipating the Allied offensive, the Japanese Burma Area Army commander, Gen Masakazu Kawabe, struck first. In Mar 1944, he launched a major 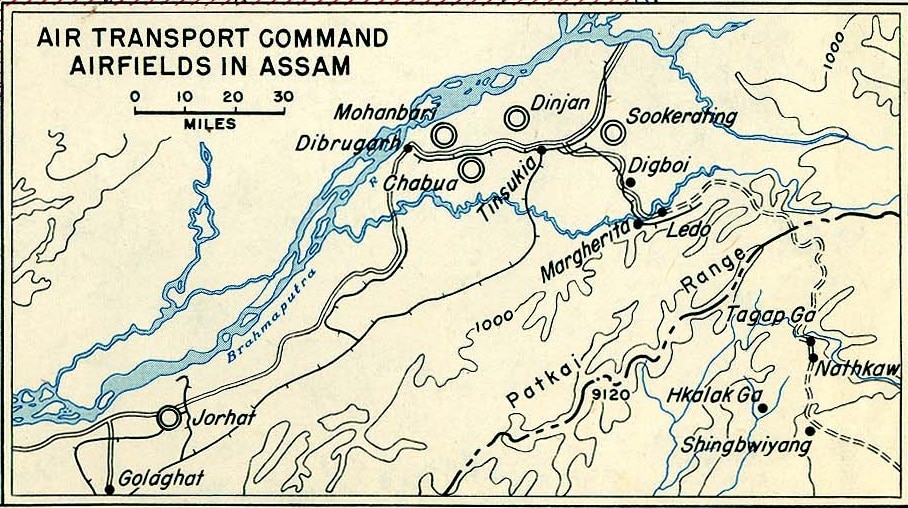 offensive into India with his 15th Army of about 100.000 veteran troops, while a newly organized 33d Army attempted to check both Stilwell’s advance and that of the Chinese Y Force which had begun moving forward astride the Burma Road toward the Burmese border.

The Japanese attacks initially met with great success, forcing Gen William J. Slim to postpone his own plans in a desperate defense of the Indian frontier. However, by July Kawabe’s forces were severely overextended and generally exhausted, allowing the Allies to retake the initiative on all fronts.

Slim’s offensive now began in earnest, and it continued throughout the rainy season, ultimately resulting in the destruction of the Japanese 15-A and the reconquest of central Burma. But even before his forces had begun driving east, Stilwell’s attack produced results. Spearheading his attack was a recently formed American unit led by Gen Frank A. Merrill and known as Merrill’s Marauders. Moving in advance of the cautious X Force Chinese divisions, Merrill’s Marauders, code-named Galahad, had managed to seize their main objective, the airfield at Myitkyina in northern Burma. However, Japanese troops 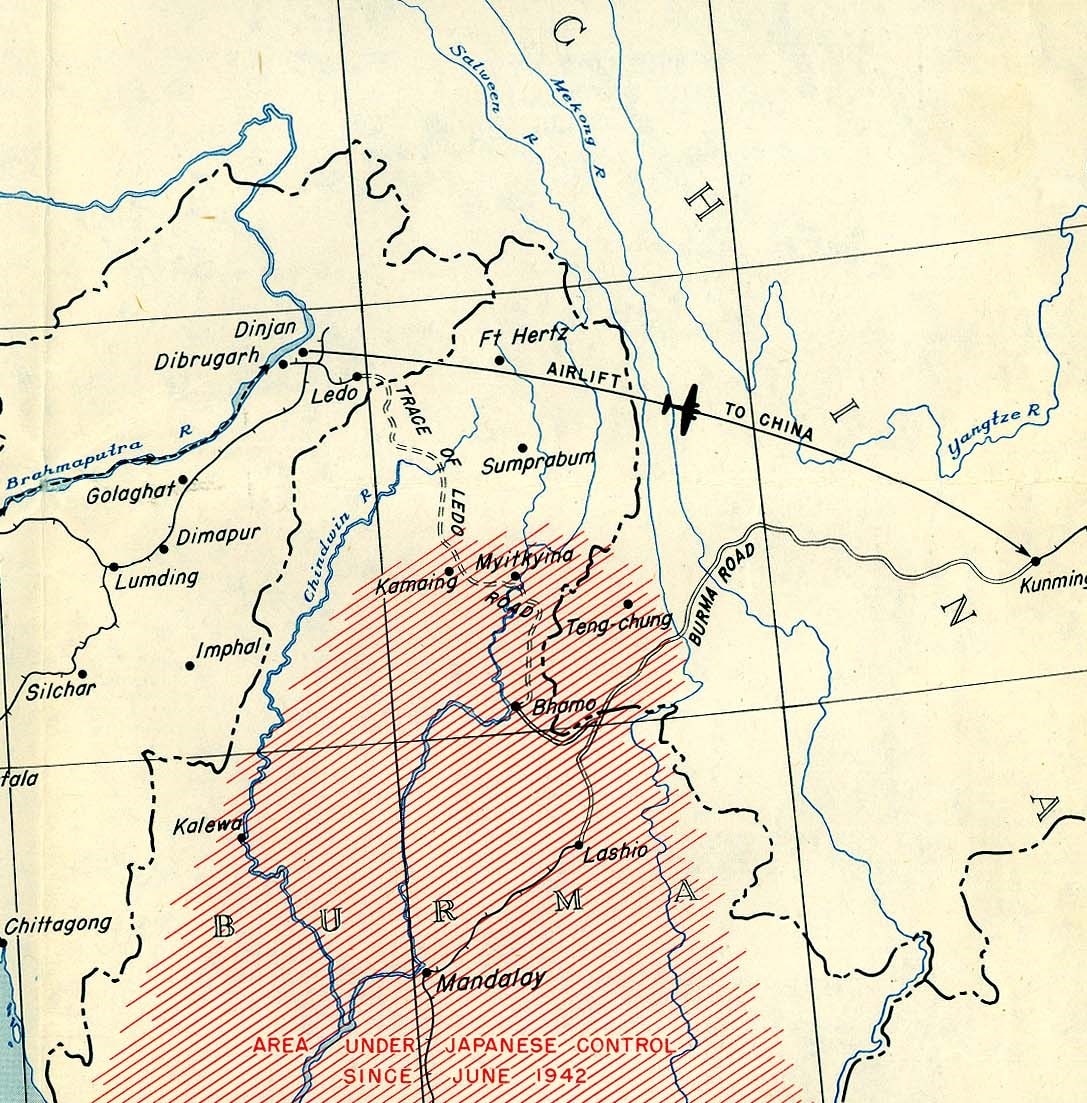 clung to portions of the town itself, and the American troops, their effectiveness being worn away by battle casualties, disease, and fatigue, was unable to root them out until August.

By the time Myitkyina in northern Burma was secured and the British advance through central Burma well advanced, Allied success in the Pacific had greatly diminished the importance of both, the Burma Theater of Operations and the China Theaters of Operations. The subsequent successful invasion of the Philippines promised a surer and faster route to Japan than through the Asian mainland. Although American hopes for at least a major air campaign against Japan from the Chinese mainland never completely faded, the continued difficulties in supplying such an effort, and the series of Japanese ground offensives in 1944 that overran most of the newly constructed American airfields in central China, made such projections extremely unlikely. In fact, the last US heavy bombers left China in Jan 1945, eventually ending up on Saipan, about 1500 miles south of Tokyo, where the major American strategic bombing offensive against the Japanese home islands was being mounted.

Meanwhile, throughout the summer of 1944, Franklin D. Roosevelt had been urging Chiang Kai-shek to place all of his US-supported armies under the command of Gen Stilwell. Chiang, not unexpectedly, refused and asked for Stilwell’s recall, a request that the president honored. In Oct 1944, Gen Albert C. Wedemeyer replaced Stilwell as chief of staff to Chiang and commander of American forces in the China Theater.

At the same time, a separate theater in India and Burma was created with Gen Daniel I. Sultan, formerly Stilwell’s deputy, as its commanding general. In China, the command issue was dropped, and the American strategy became simply one of trying to realize at least something from previous investments without additional commitments. In Burma, however, the Allied counter-offensive continued, despite the greatly diminished strategic importance of this remote sub-theater. 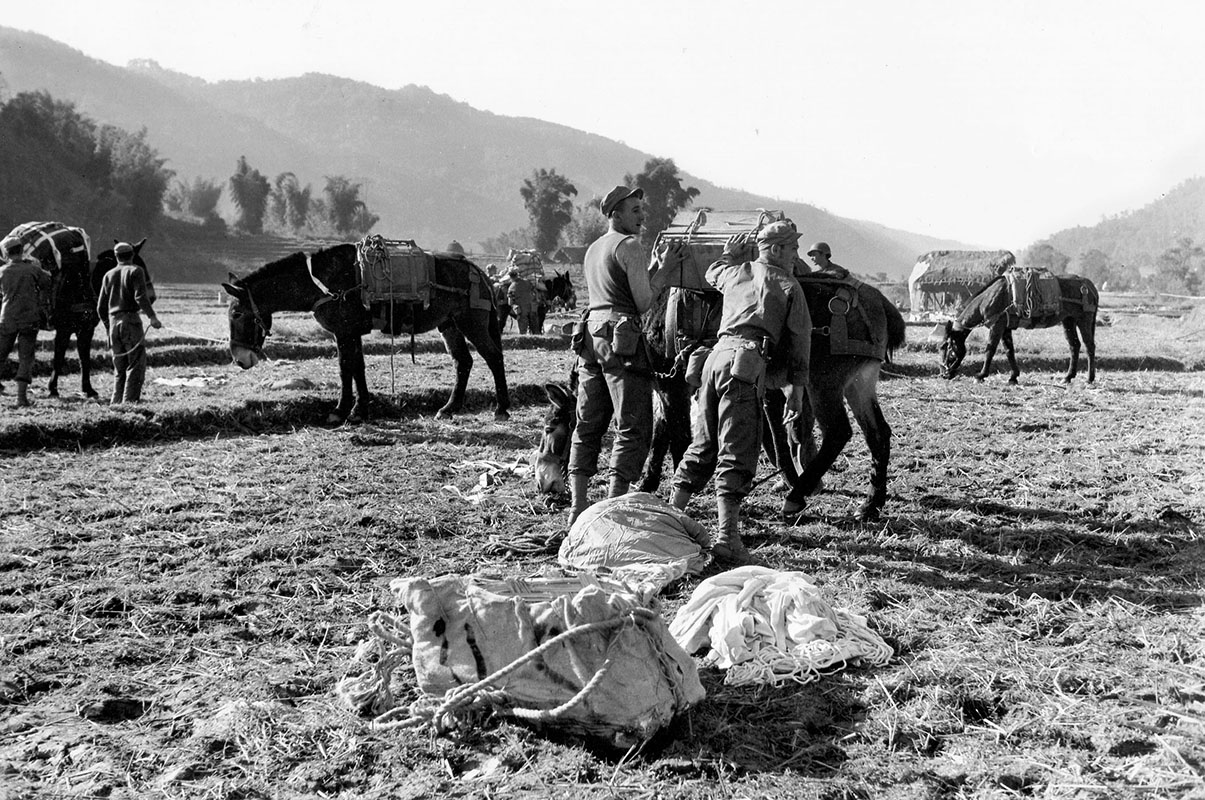