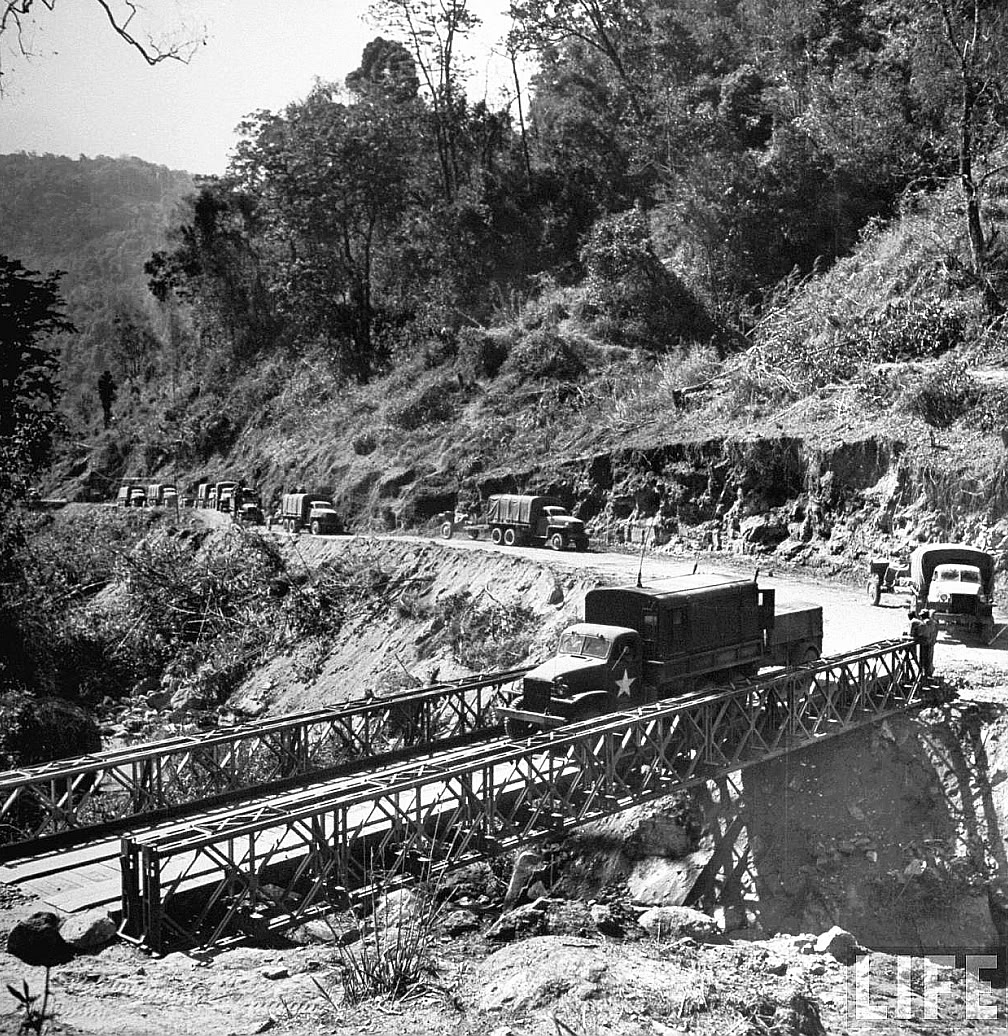 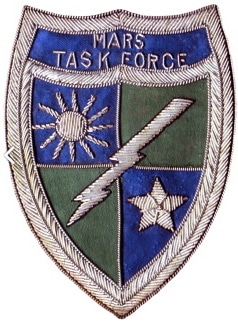 Late in Feb 1944 the first phase of the Allied Operation for the reconquest of Burma began. The purpose of this Allied offensive was to regain control of the land routes across Burma so that supplies could be transported to China. The enormous tonnage of supplies that were required of the American and British Allies in order to keep China in the war had to be transported vast distances over sea, land, and air. With the Japanese controlling all of the seaports of China, as well as the whole of French Indo-China, Thailand, and Burma, our Chinese Allies were sealed off by land and sea. This threw a tremendous strain on the air force which attempted to sustain the supply flow until a sea and land route could be re-established.

At the beginning of the campaign (related in this archive), supplies were being flown from India, across Burma, and into the interior of China. The objective of this campaign was to drive the enemy out of Burma so that the land and sea routes to China could be opened. This operation was planned in late 1943. At the time there were known to be a total of five Japanese Divisions in Burma. The first phase, which was to be carried out by American and Chinese forces operating from bases in the vicinity of Ledo on the northwest border of Burma, had as its objective the capture of Myitkyina, the northern 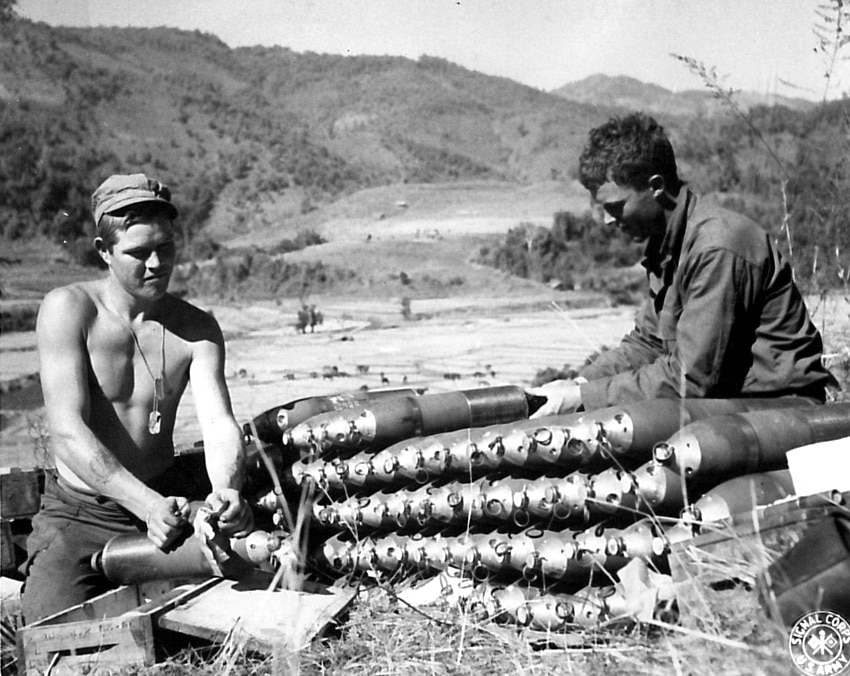 terminus of the Myitkyina Mandalay railroad. The accomplishment of this first phase would permit the building of a road from Ledo to the Burma Road and thus facilitate the overland transportation or supplies to China while succeeding phases of the campaign were being accomplished. At the conclusion of the campaign, supplies could again be brought in by sea to the Port of Rangoon, carried by rail to Lashio, and thence over the Burma Road to China as had been the case previous to the occupation of Burma a by the Japanese.

The first phase of this campaign was accomplished by Aug 3, 1944, with the fall of Myitkyina. The American and Chinese forces with which this operation was conducted consisted of one American RCT (Regimental Combat Team), the 5307th Composite Unit (Provisional), popularly known as Merrill’s Marauders, and the Chinese 22-ID and 38-ID. The Marauders spearheaded the advance of this force all the way through northern Burma, and during the assault on the strongly held objective.
This was the last offensive action of the Marauders, for, with the end of this phase of the Burma Campaign, disease, fatigue, malnutrition, and the normal attrition of jungle fighting had decimated their ranks. With a small cadre of the original Marauders and many replacements, the unit was reorganized and re-designated as the 475th Infantry. 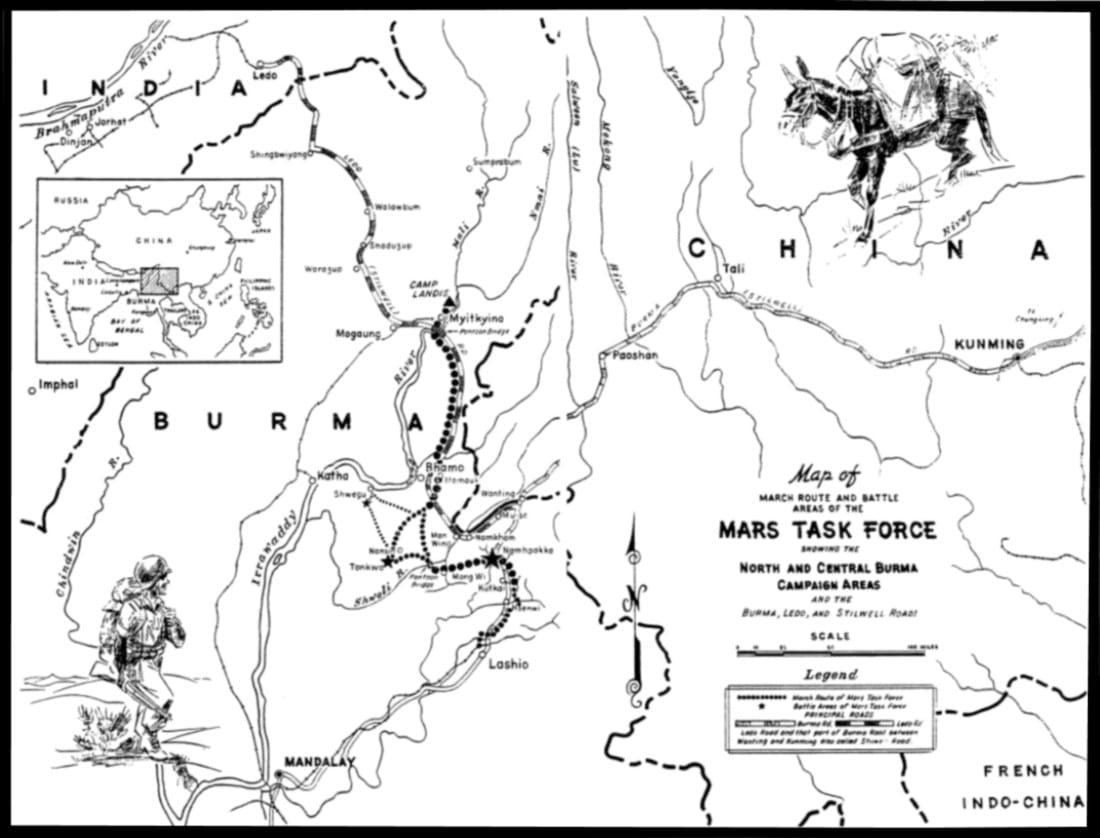 The second phase of the Central Burma Campaign was started from Myitkyina on Nov 15, 1944, and was assigned to a specially organized American Force, the Mars Task Force.

This task force was composed of Hqs, the 475th Infantry Regiment (formerly the Marauders), and the 124th Cavalry Regiment which was to fight as infantry. The organization of the two regiments differed as one was standard infantry and the other standard cavalry but their equipment was the same. Organic transportation was by pack mules only, and the force was to be resupplied by airdrop. It was necessary to reorganize the 124th Cavalry Regiment, as they arrived in the theater under-strength, and the equipment which was issued to them for the operation could not be properly employed under a standard horse cavalry organization. The result was a regiment consisting of three squadrons which were in effect three small but complete combat teams, each with a battery of 75-MM pack howitzer field artillery attached. The heavy weapons were contained in the headquarters troop of the squadron, and in the headquarters platoon of each line troop. The service and heavy weapons troops of the regiment were disbanded and the personnel was used to strengthen the squadrons.

Each rifle platoon had one mortar squad armed with one 60-MM mortar. This mortar was the modified type equipped with a small base plate and a lanyard trigger. This permitted the weapon to be fired on a horizontal plane to give the shell a flat trajectory. It proved to be extremely effective against enemy bunkers that were too close to be reached by the high-angle tire. Training of the force was characteristic of that of the jungle and emphasized small unit leadership and teamwork within small units. Discipline was emphasized to insure efficient and aggressive action on the part of small units and individuals when acting independently. 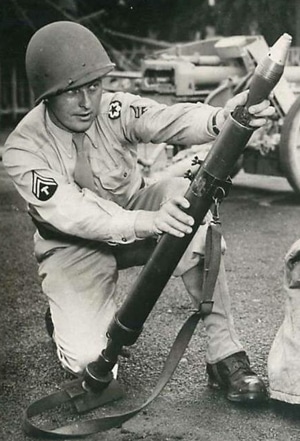 Live ammunition was used in all combat problems to familiarize individuals with the effectiveness of their own and supporting fires. The 475-RCT left Myitkyina on Nov 15, 1944, moving south.

During this time the 124-CR continued training. It was not until Dec 16, the day of the Battle of the Bulge in Belgium, that the 124-CR started on its mission objective. It moved in three squadron serials, each a day apart. The enemy situation was very vague at this time, as the Japanese had moved south after the fall of Myitkyina, and contact with them had been lost. Consequently, the first objective of the task force was to develop the situation. A specific mission would be assigned later when the enemy situation was better known. For the present, it was to move south on a prescribed route of march. Two weeks after leaving its base at Myitkyina, the 124-CR received its definite mission. It was to cut the Burma Road in the vicinity of Namphakka. In doing this it was to go by way of Bahmo and Mong Wi, Rendez-vouing with the 475-RCT in Mong Wi. By Jan 11, 1945, the two regiments and the forward command post of the Mars Task Force were assembled in Mong Wi.

At Mong Wi, the two regiments were given their specific missions. The Burma Road in the Task Force objective area was dominated by two hill masses about three miles apart. The 475-RCT was assigned the southern hill mass, and the 124-RCT was given the northern hill mass. Both of these regimental objectives were known to be occupied by the enemy, but the strength was not known. The terrain would not permit the combat teams to move towards their objectives on a broad front, so they resorted to their routine method of advance; that of squadrons or battalions moving a day apart on the same trail. The 3/124 moved out of Mong Wi on Jan 18, a day after the 1/475-RCT. It was followed on Jan 19, by the 1/124 while the 2/124 remained in Mong Wi as task force reserve. 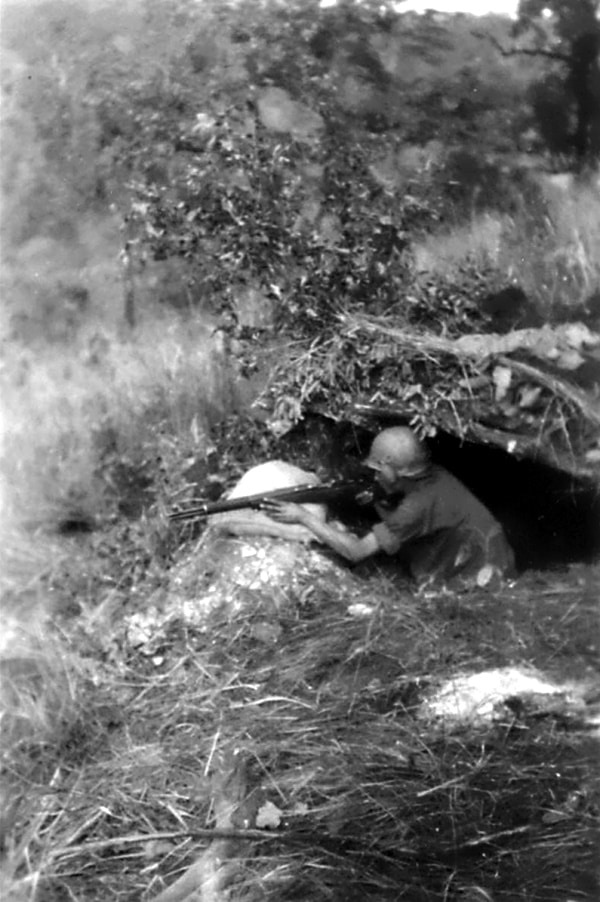 The approach to the two objectives took the regiments over the most difficult terrain they had encountered. It required four days to march twenty-one miles, the point at which contact was made with the enemy.

About mid-morning of the fourth day out of Mong Wi, the 1/124 heard heavy firing from the southeast. This was in the direction of the 475-RCT. After a short time, the firing of small arms decreased but artillery continued. It was learned later that the 1/475 had struck a trail block and that the artillery which had gone in position to support the battalion continued firing to interdict traffic on the Burma Road.

At noon it was learned that the 3/124, a day’s march ahead of the 1/124, had been stopped the day before by heavy enemy resistance. During the night the 3/124 had been subject to a strong attack on their perimeter and had taken many casualties. The 3/124 Commander considered his position untenable for the coming night unless he could be given reinforcements.

The sound of the 3/124 fight had not been heard by the 1/124 zone because of the peculiar acoustics caused by the cross compartment arrangement of the hills. The enemy situation was developing in front of both regiments. 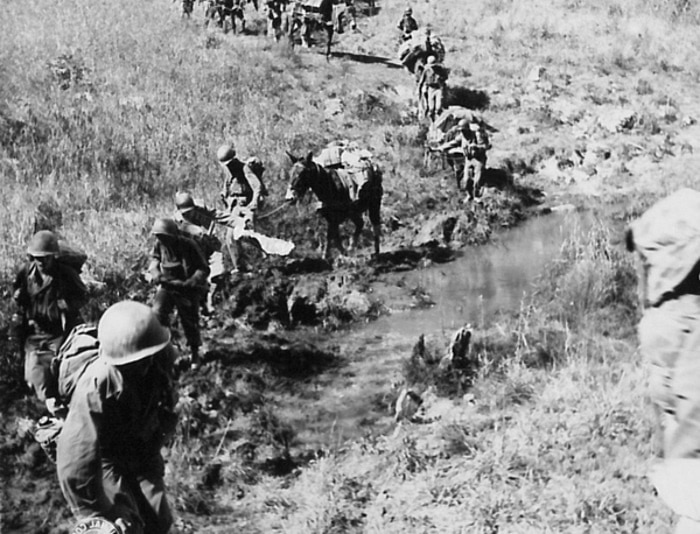