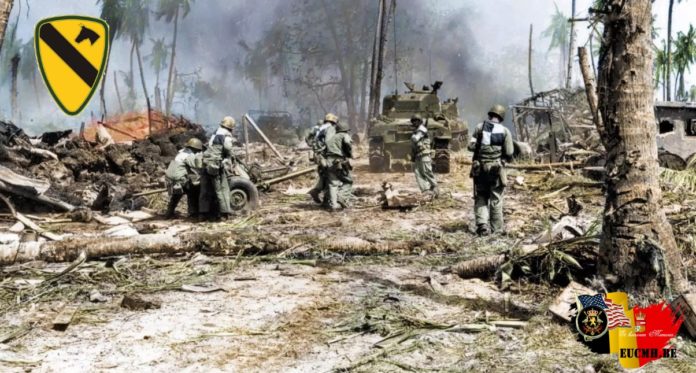 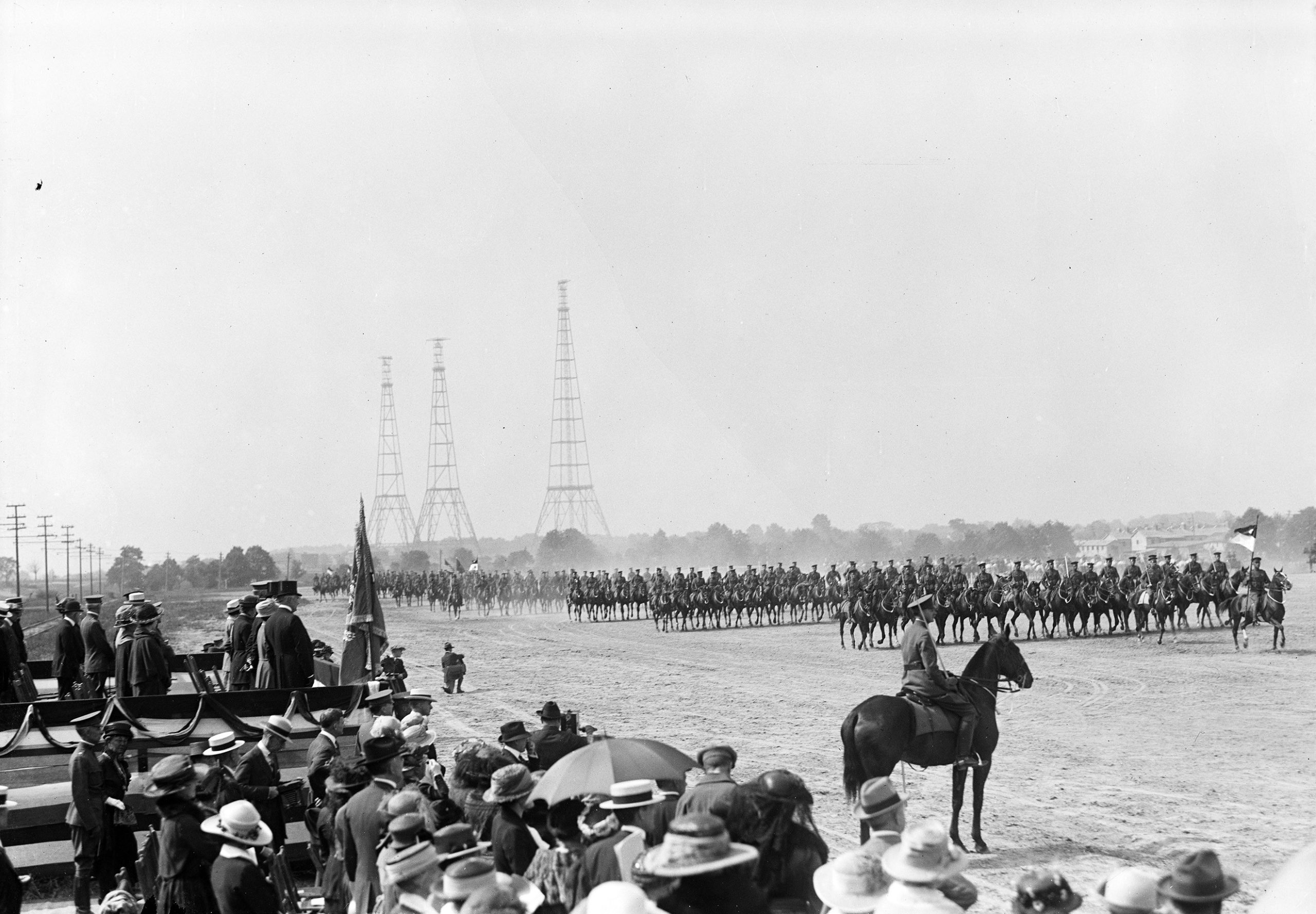 The history of the 1st Cavalry Division began in 1921 after the army established a permanent cavalry division Table of Organization and Equipment (TO&E) on Apr 4, 1921. It authorized a square division organization of 7.463 officers and men, organized as follows, the Hqs Element (34 men), two Cavalry Brigades (2.803 men each), one Field Artillery Battalion (790 men), one Engineer Battalion (357 men), the Division QM Trains Command (276 men), the Special Troops Command (337 men) and an Ambulance Company (63 men).

On Aug 20, 1921, the War Department Adjutant General constituted the 1st and 2nd Cavalry Divisions to meet partial mobilization requirements and authorized the establishment of the 1st Cavalry Division under the new TO&E on Aug 31, 1921. Since the 1-CD was to assemble from existing units, it was able to go active in Sep 1921, even though the subordinate units did not arrive completely until as late as 1922.

The 1-CD was assigned to the VIII Corps Area, with its division headquarters and 2nd Brigade located at Fort Bliss, Texas, and the 1st Brigade at Camp Harry J. Jones in Douglas, Arizona. 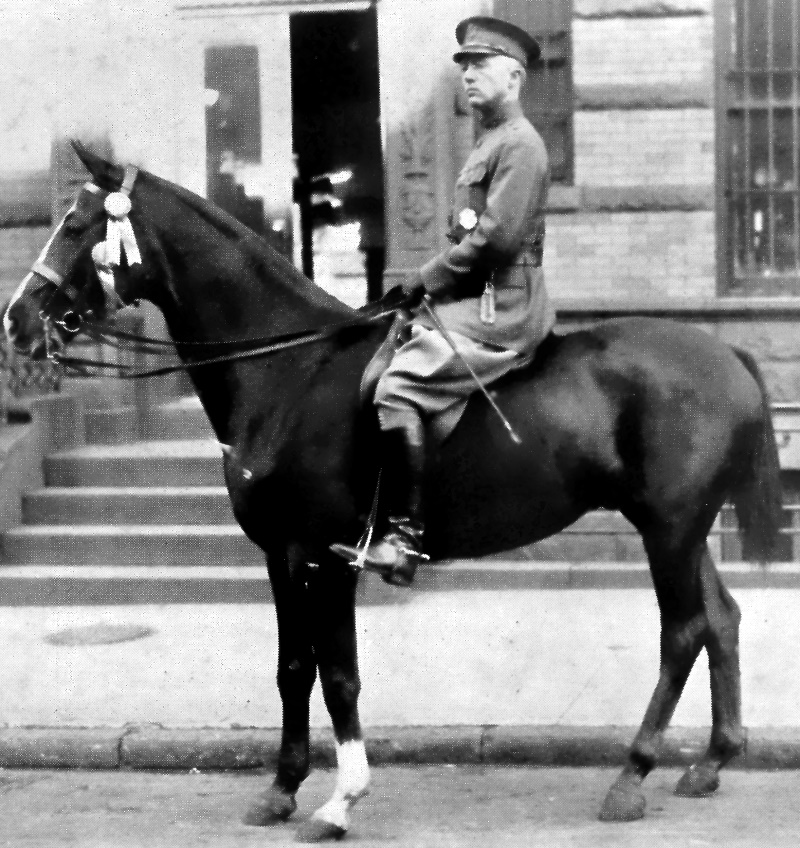 The headquarters facilities used by the 1-CD were those previously vacated by the 8th United States Brigade when it was commanded by Gen John J. Pershing in 1916 and the wartime 15-CD, which had existed at Fort Bliss between Dec 10, 1917, and May 12, 1918. The 1-CD’s assembled at Douglas, Arizona. The 1-CR, the 7-CR, and the 8-CR had previously been assigned to

the wartime 15-CD until they were returned to the VIII Corps Area troop list on May 12, 1918. The 1-CR remained assigned until it was transferred to 1-CD on Aug 20, 1921. The 7, 8, and 10-CRs were transferred on Sep 13, 1921, although the assignment of the 10-CR to the 1-CD was controversial because the transfer violated the Jim Crow Laws (Jim Crow laws were state and local laws that enforced racial segregation in the Southern United States. All were enacted in the late 19th and early 20th centuries by white Democratic-dominated state legislatures after the Reconstruction period. The laws were enforced until 1965). This controversy continued until Dec 18, 1922, when the 5-CR also assigned to the VIII Corps Area swapped places with the 10-CR.

In 1923, the 1-CD held division maneuvers for the first time, intending to hold them annually thereafter. However, financial constraints made that impossible but in 1927, through the generosity of a few ranchers who provided free land, was the division able to conduct such exercises again. In 1928, Gen Herbert B. Crosby, Chief of Cavalry, faced with personnel cuts, reorganized the cavalry regiments, which in turn reduced the size of the 1-CD. Crosby’s goal was to decrease overhead while maintaining or increasing firepower in the regiment. After the reorganization, each cavalry regiment consisted of a headquarters and headquarters troop; a machine gun troop; a medical and chaplain element; and two squadrons, each with a headquarters element; and two-line troops. The cavalry brigades’ machine gun squadrons were inactivated, while the responsibility for training and employing machine guns fell to the regimental commanders, as in the infantry. About the same time that Crosby cut the cavalry regiment, the army staff, seeking to increase the usefulness of the wartime cavalry division, published new tables of organization for an even larger unit. The new structure increased the size of the signal troop (177), expanded the medical unit to a squadron (233), and endorsing Crosby’s movement of the machine gun units from the brigades to the regiments (2X176). 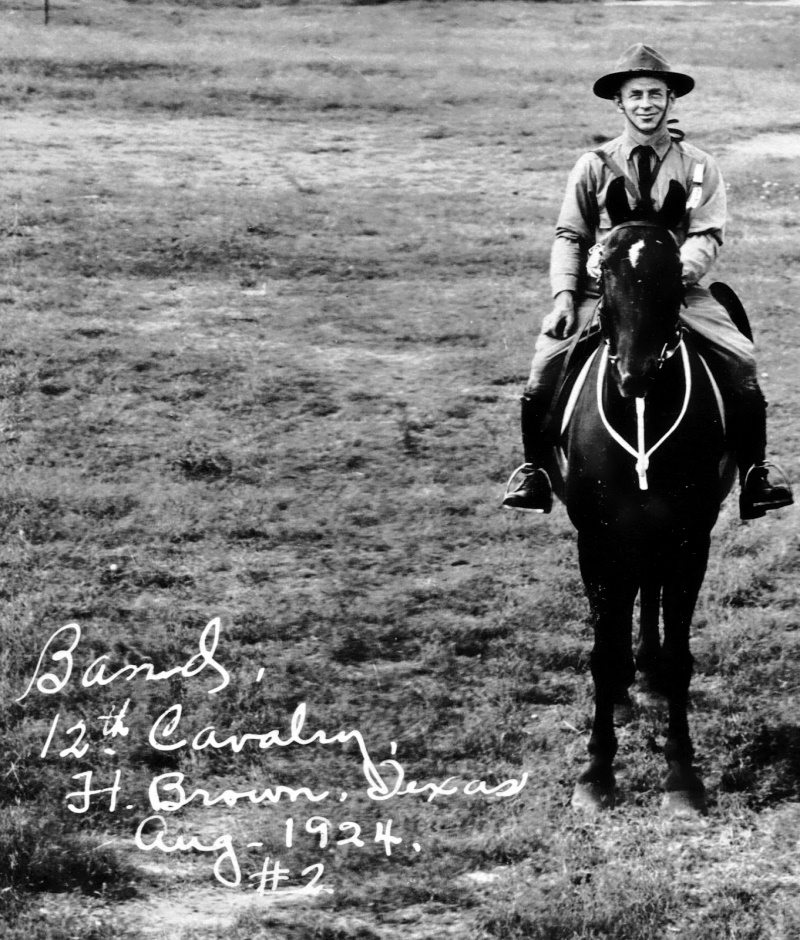 A divisional aviation section, an armored car squadron (278), and tank company (155) were added, the field artillery battalion was expanded to a regiment (1717), and divisional strength rose to 9595.

With the arrival of the 1930s, serious work started on the testing and refining of new equipment and TO&Es for a mechanized and motorized army. To facilitate this, the 1-CD traded the 1-CR for the 12-CR on 3 Jan 1933. Taking into account recommendations from the VIII Corps Area, the Army War College, and the Command and General Staff School, the board developed a new smaller triangular cavalry division, which the 1-CD evaluated during maneuvers at Toyahvale, Texas, in 1938. Like the 1937 infantry division test, the maneuvers concentrated on the divisional cavalry regiments around which all other units were to be organized.

Following the test, a board of 1-CD’s officers, headed by Gen Kenyon A. Joyce, rejected the three-regiment division and recommended retention of the two-brigade (four-regiment) organization. The latter configuration allowed the division to deploy easily in two columns, which was accepted standard cavalry tactics. However, the board advocated reorganizing the cavalry regiment along triangular lines, which would give it a HQs and an HQs troop, a machine gun squadron with special weapons and machine gun troops, and three rifle squadrons, each with one machine gun and three rifle troops.

No significant change was made in the field artillery, but the test showed that the engineer element should remain a squadron to provide the divisional elements greater mobility on the battlefield and that the special troops’ idea should be extended to include the division headquarters, signal, and ordnance troops; quartermaster, medical, engineer, reconnaissance, and observation squadrons; and a chemical warfare detachment. One headquarters would assume responsibility for the administration and disciplinary control for these forces.

Although the study did not lead to a general reorganization of the cavalry division, the wartime cavalry regiment was restructured, effective Dec 1, 1938, to consist of a HQs and an HQs troop, a machine gun and a special weapons troops, and three squadrons of three rifle troops each. The special troops remained as structured in 1928, and no observation squadron or chemical detachment found a place in the division. With the paper changes in the cavalry divisions and other minor adjustments, the strength of a wartime divisional rose to 10.680. 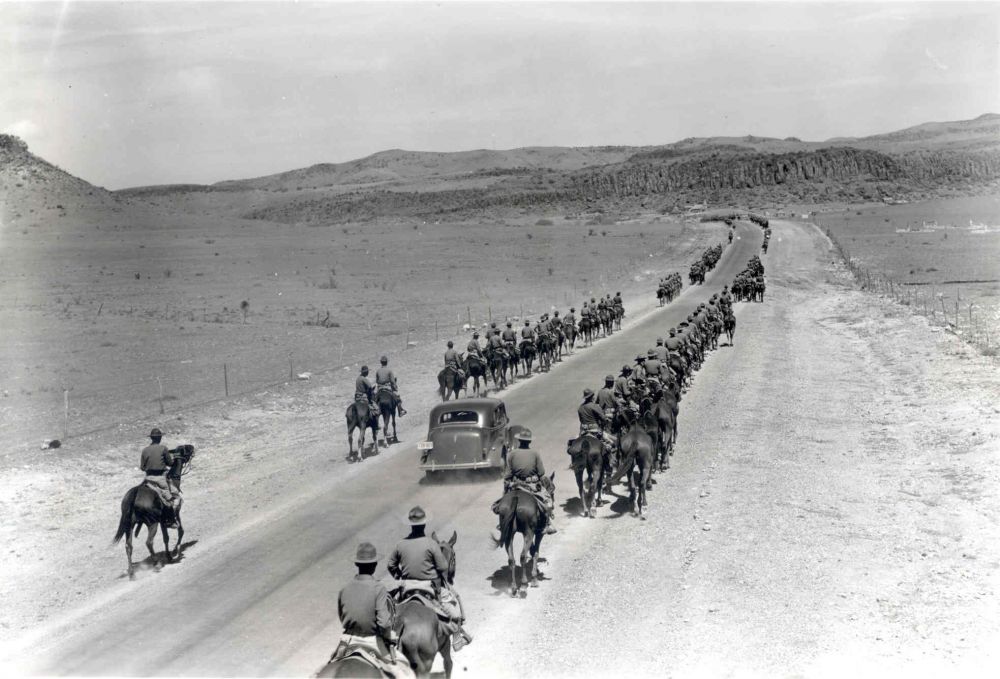 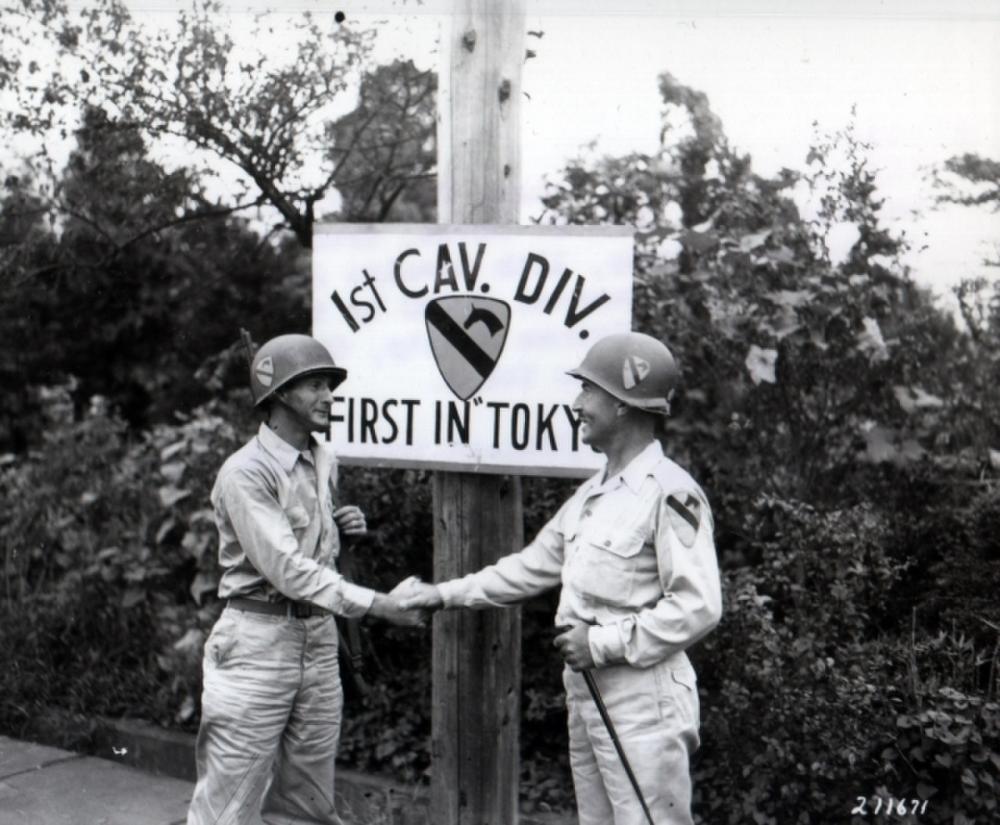 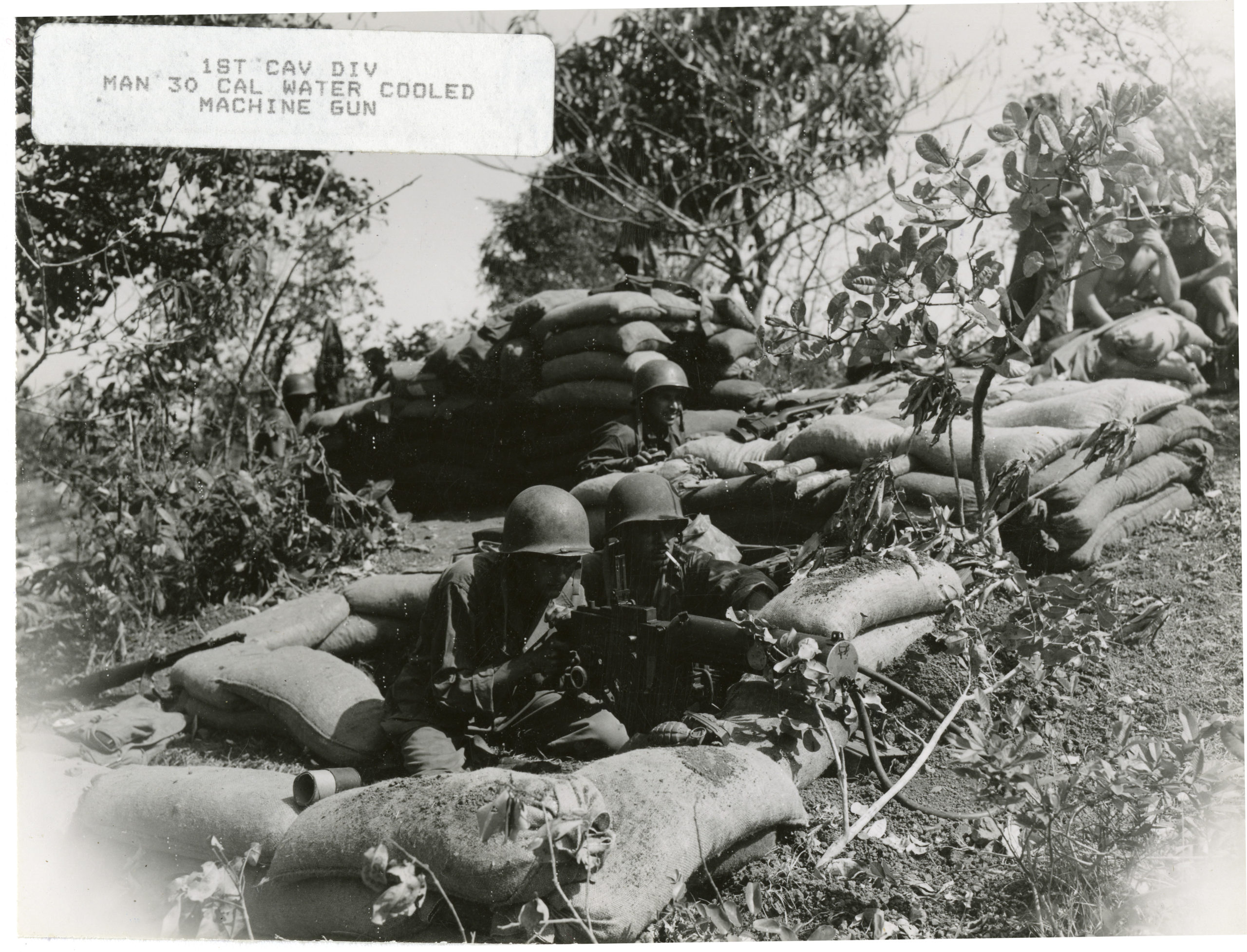 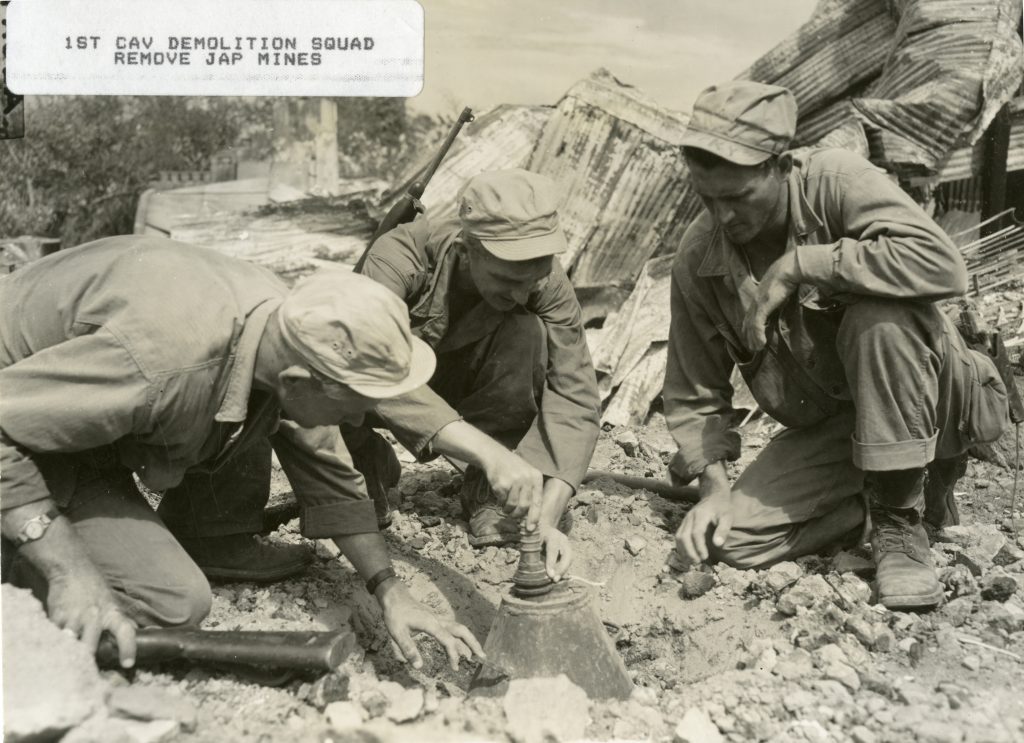 The 1st Cavalry Division (Special) division arrived in Australia on Jul 26, 1943, and engaged in jungle and amphibious training at Toorbul Point and Port Stephens. The 2nd Cavalry Brigade departed Strathpine, Australia on Dec 19 and arrived in Oro Bay, New Guinea on Dec 20. The division established its command post at Cap Sudest, New Guinea on Jan 4, 1944, and by Feb 25, the remainder of the division had arrived in Oro Bay from New Guinea. It then trained for operations in the Admiralty Islands. A squadron of the 5-Cav landed on Los Negros Island on Feb 29 and after heavy combat occupied the Momote Airfield. It was then reinforced by the 2nd Squadron of the 7-Cav on Mar 4 while on Mar 6 the 12-Cav landed. The 2nd Cavalry Brigade arrived on Mar 9 and employed the 8-Cav to assault the Manus Island on Mar 15 which overran the Lugos Mission, followed by the 7-Cav. By Mar 18, Lorengau and its airfield had been captured, and the division mopped up both Los Negros and Manus and seized other nearby islands that secured the Admiralties by May 18, 1944. The division then trained for the next operation until departure for the Philippines on Oct 12.

The 5-Cav, 7-Cav, and the 12-Cav assaulted the Leyte Island on Oct 20 and cleared San Jose, Tacloban Airfield, and Cataisan Peninsula. The 8-Cav landed at La Paz Samar Island and secured the San Juanico Strait on Oct 24. The division regrouped on Oct 28 as the 2nd Cavalry Brigade assembled at Barugo, converged on Carigara and contacted the elements of the 24-ID on Nov 2. 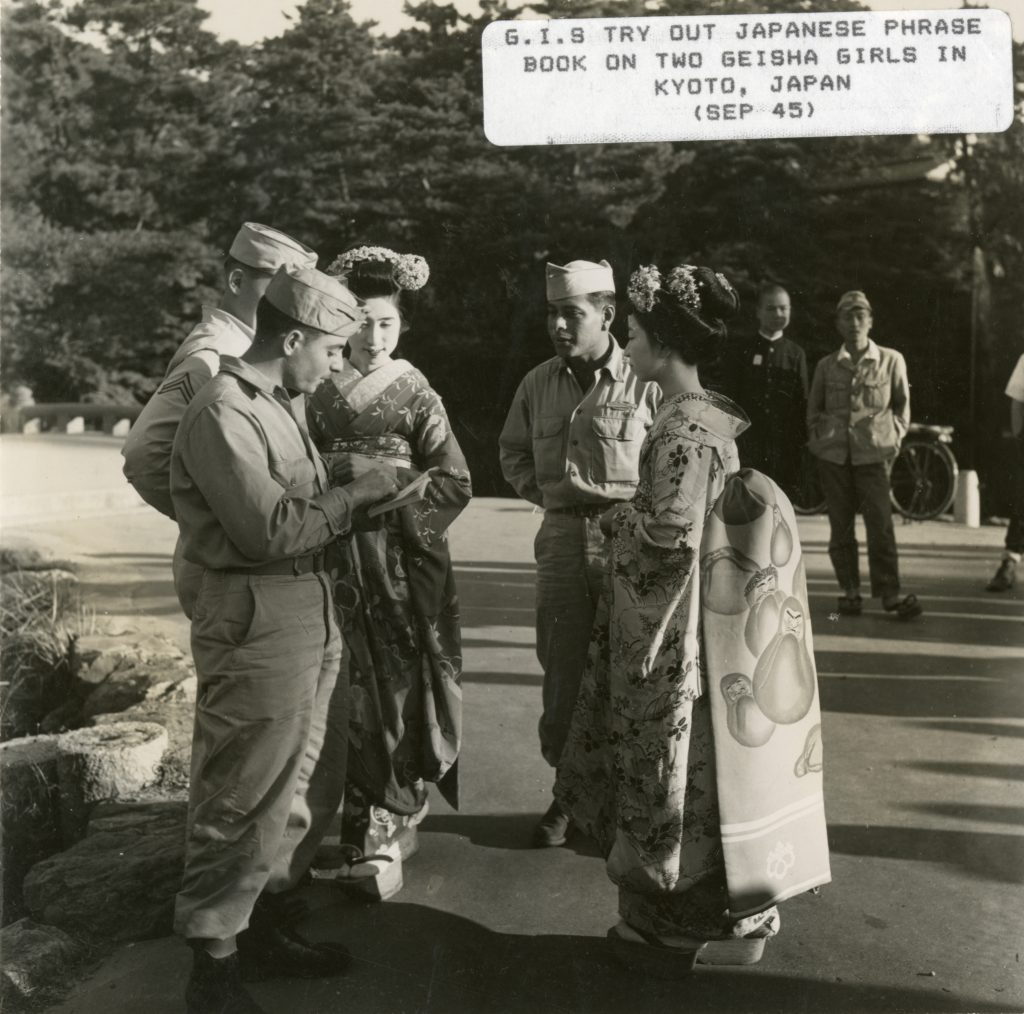 The 12-Cav was attached on Nov 15 and assumed responsibility for the Capocan-Carigara-Barugo area. The division cleared the Mount Badian – Hill 2348 region from Nov 28 to Dec 9 and the 12-Cav battled at the ridge south of Limon Nov 30 to Dec 10 when the 7-Cav relieved it and finally captured it on Dec 14. The 12-Cav pushed into Lonoy on Dec 19 and seized Kananga 2 days later. The division attacked then west toward the coast over swamps against scattered resistance on Dec 23, and the 5-Cav, as well as the 12-Cav, reached the coast at Tibur on Dec 28.

The 1-CD then fought past Villaba to contact the 32-ID on Dec 30. The 8-Cav returned from patrolling on the Samar Island on Jan 8, 1945, and prepared for movement to Luzon. The 1st Cavalry Division landed in the Mabilao area of Lingayen Gulf Luzon on Jan 27, and the 12-Cav was relieved from the attachment on Jan 31 as the division attacked with the 5-Cav and the 8-Cav from Guimba toward Manila. The division entered Manila on Feb 3 and fought through fierce opposition in the northern and eastern suburbs. The 12-Cav attacked into the Rosario Heights on Feb 10, and the division overran Neilson Field to reach the shore of Manila Bay 2 days later.
The 7-Cav captured crossings over the Mariquina River in the Ugong-Rosario area on Feb 20. The 2nd Cavalry Brigade attacked from the Taytay area on Feb 23 toward the Shimbu Line but was checked 2 days later in the Antipolo area. The 5-Cav captured the Agriculture Building in Manila on Mar 1 and the division began its drive against the Shimbu Line with four regiments abreast on Mar 8 and stormed Bench Mark Hill 11, and seized the crest of Bench Mark Hill 9 on Mar 10.

It was relieved in the Antipolo area on Mar 12 and withdrew for rehabilitation. The division began then the drive on Lipa by taking Santo Tomas on Mar 24 and Los Banos the following day.

By Mar 29, the 8-Cav had captured Lipa and established contact with the 11-A/B, and next opened the Batangas-Calamba supply road into Manila. The division then turned east and the 7-Cav seized Alaminos Apr 1 while the 12-Cav fought the Battle for the Imoc Hill on Apr 1/5. The 5-Cav had reached San Pablo on Apr 2 and after heavy combat, the division took Mauban on the east coast on Apr 10 and established contact with the 11-A/B at Lamon Bay the next day. The 1st Cavalry Brigade pushed into the Bicol Peninsula on Apr 12 and the Japanese defenders had been pocketed north of Mount Matassana Bundoc by Apr 16. This area was reduced by the 2nd Cavalry Brigade commencing Apr 17.

Beginning on May 2 the 5-Cav probed Mount Isarong for the next two weeks. The division was relieved of its combat missions on Jun 26 and engaged exclusively in training at Lucena, where it had been since May 6. The division was in this capacity when hostilities ended.