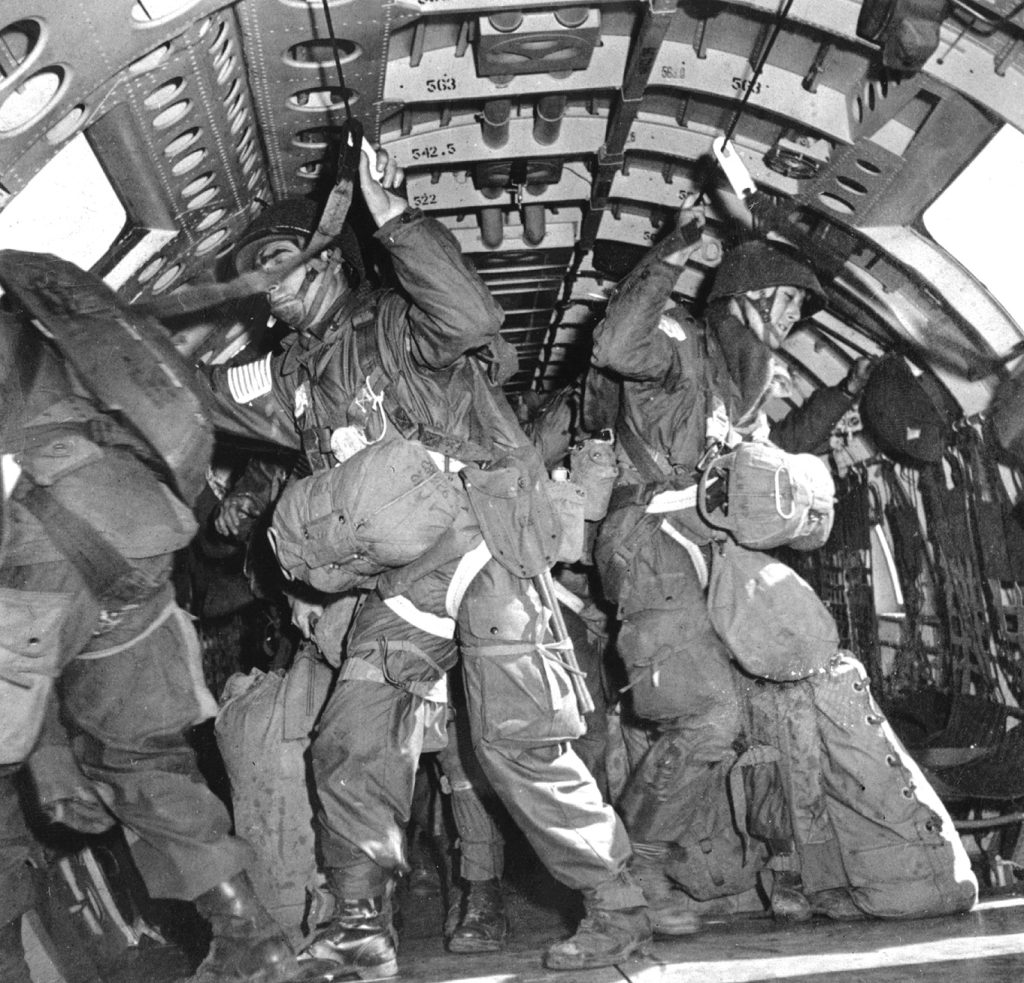 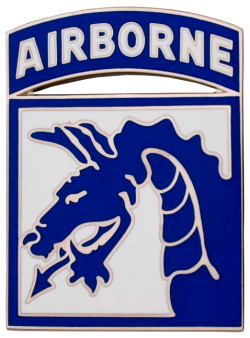 2. The Corps was withdrawn from the Schmidt area, on February 13, returned to base at Epernay, France, and, in accordance with the directives from the 1st Allied Airborne Army, began planning for Operation Varsity, under planning control of the British 21st Army Group.

3. The British 21st Army Group directed the operation would be in support of the British Second Army. The mission evolved from conferences with the General Officer Commanding that Army, the Commanding General of the 1st Allied Airborne Army, and the Commanding General of the XVIII Corps (Airborne), was: to disrupt the hostile defense of the Rhine River in the Wesel sector by the seizure of the key terrain by an airborne attack, in order rapidly to deepen the bridgehead to be seized in an assault crossing of the Rhine River by British ground forces, and in order to facilitate the further offensive operations of the British Second Army. 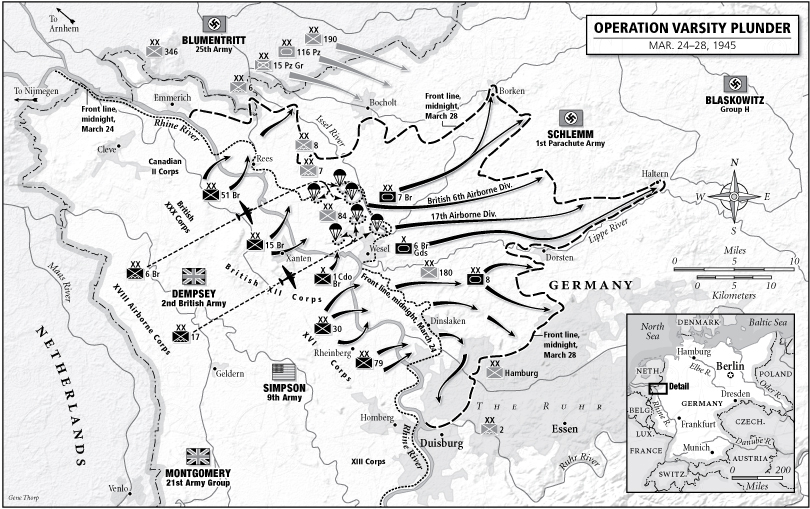 4. The British Second Army agreed to defer its assault crossing of the Rhine by as much as five days if the weather should compel postponement of the airborne effort which the Commander in Chief, 21st Army Group, and the General Officer Commanding the British Second Army, considered essential to the success of the Rhine crossing. Daylight was chosen for the airborne operation in order to take full advantage of complete Allied air supremacy and the overwhelming superiority of available Allied artillery.

5. Decision was made that the airborne strike would follow the ground force assault crossing, which was the first time during the war that the employment of an airborne force in daylight was done.

6. Development of the operation was planned successfully to clear and secure divisional areas; to establish contact rearward with assaulting British XII Corps and to expand the bridgehead laterally to the south to seal off the city of Wesel and make contact with the US Ninth Army (Wesel was to be seized by a rapid night assault by the British 1st Commando Brigade); to further deepen the bridgehead to a depth of about 10.000 yards by a coordinated attack to seize key terrain; to be prepared, on Army order, to deepen this bridgehead to 15.000 yards by an attack in conjunction with the UK VII Corps on its left, and thence to exploit eastward in accordance with the Army orders and the situation.

7. It was decided that the XVIII Corps (Airborne), less its divisions, would withdraw from this operation not later than D+6, in order to mount the next airborne operation, as directed by the Supreme Commander.

8. Weather was excellent. The execution began on D-Day, March 24. Both divisions led with their parachute echelons. The drops, commencing at 1000 hours, concluded with the last glider element shortly after noon. Fifteen minutes later, 240 heavy bombers dropped one day of supply by parachute to each division. Ground contact was established with the British XII Corps on D-Day, and ferrying and bridging operations being ahead of schedule, the supply situation permitted the cancellation of all planned subsequent air resupply missions. The airborne phase of Varsity, therefore, terminated at about 1330 on D-Day.

9. The operation was developed in full conformity, phase by phase, with the plan. By the time the final phase line, about 15.000 yards deep, was about to be reached, the Corps ordered this line disregarded, and maximum exploitation to the east, the objective being to seize debouchment areas beyond the defiles at Dulmen and Haltern, in order to permit the British and the American armors to break out into the north German plain.

10. Prior to this time, the British 6th Guard Armored Brigade (Scots Guards, Coldstream Guards, Grenadier Guards) had been attached to this Corps. Attaching the 513th Parachute Infantry Regiment to this brigade, it was pushed with maximum speed and energy to the east, and rapidly seized the debouchment areas desired. Immediately on the heels of this brigade, the infantry of the 17th Airborne Division arrived, took over the defense of these areas, and freed the Guards Armored Brigade for its rapid subsequent movement on Munster.

11. Meanwhile, through both the Dulmen and Haltern defiles, the exits of which were now securely held, the US 2d Armored Division exploited eastward. 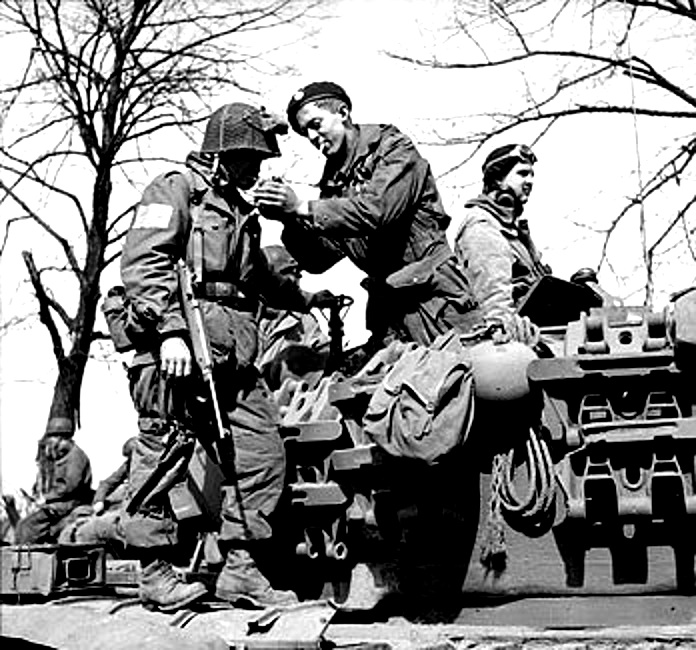 12. During the six-day period, March 24 to March 30, in which this Corps controlled the operation, it averaged a daily advance of over seven miles; took 8000 prisoners; destroyed the German 84.Infantry Division; and, by verified but the very incomplete count, captured or destroyed 124 field artillery and AA artillery pieces and 26 tanks. The withdrawal of the Corps on D+6 made it impossible to get full reports from the divisions. It is believed that the amount of material captured and destroyed greatly exceeds the above figures.

13. a. Concept and planning were sound and thorough, and execution flawless.

b. The impact of the airborne divisions, at one blow, completely shattered the hostile defense, permitting prompt link-up with the assaulting UK XII Corps, the UK 1st Commando Brigade, and the US Ninth Army in the south.

c. The rapid deepening of the bridgehead materially increased the rapidity, of bridging operations, which, in turn, greatly increased the rate of build-up on the east bank, so essential to subsequent successes.

d. The insistent drive of the Corps to the east, and the rapid seizure of key terrain in the Dulmen and Haltern areas, were decisive contributions to this operation, and to subsequent developments, as by it, both British and US armors were able to debouch into the north German plain at full strength and momentum.

e. In planning and in execution, the cooperation of participating air forces, both the British and American, I consider completely satisfactory. There was no enemy air interception. The fighter-bombers, in their counter-flak role, were as effective as could have been expected. The air resupply by heavy bombers was timely and met a critical need. Troop delivery by the IX Troop Carrier Command was on time, and with minor exceptions, in the correct areas.

f. I wish particularly to record that throughout both planning and execution, the cooperation and actual assistance provided by the Commanders, Staff, and troops of the British formations under which this Corps served, which it commanded, or with which it was associated, left nothing to be desired. For my part, I have never had more satisfying professional service in combat, nor more agreeable personal relations with participating commanders. 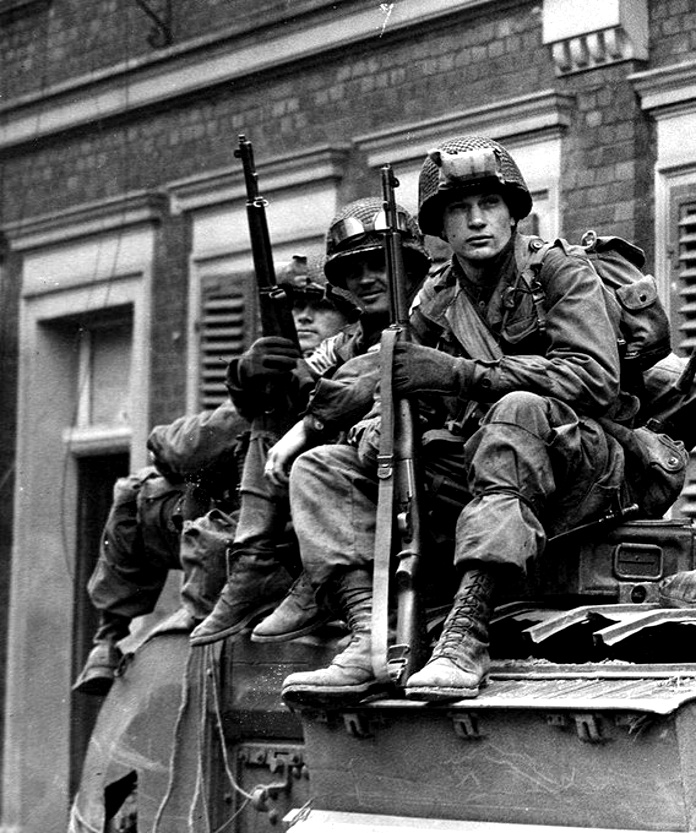 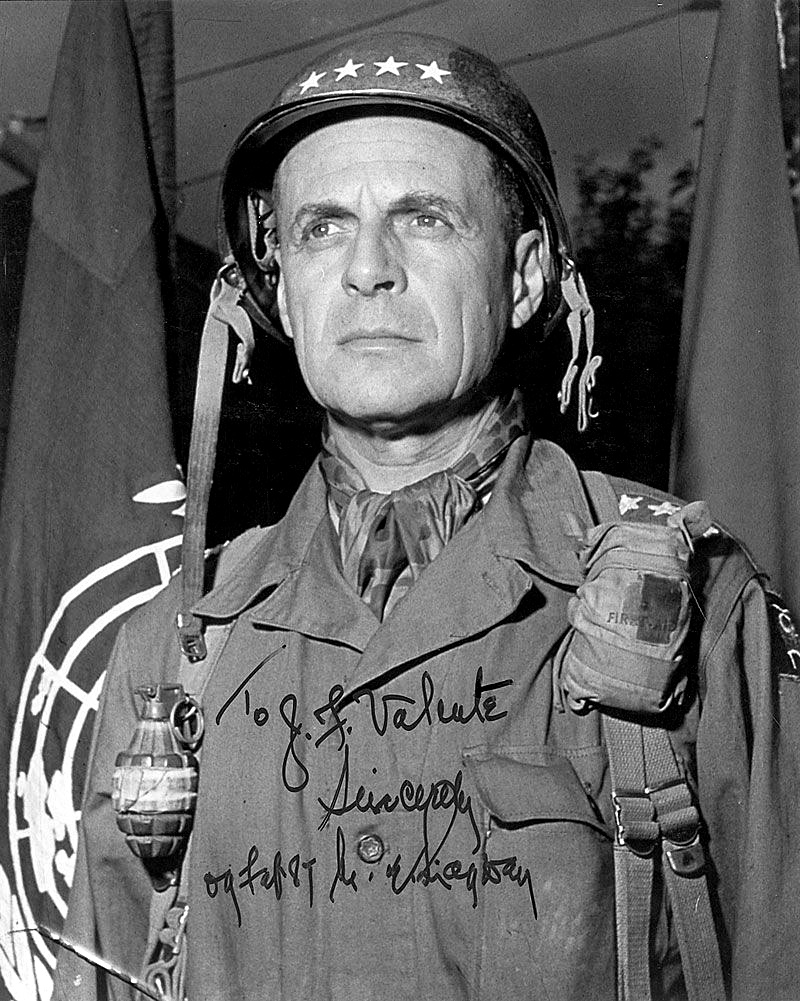 a. Headquarters, XVIII Corps (Airborne) was at Zweifall, Germany preparing plans to cross the Roer River when Gen Matthew B. Ridgway received orders to report for a conference on February 9, 1945, with the CG of the British 21st Army Group (FM Sir Bernard Montgomery). At this conference, the XVIII Corps (Airborne)(Gen Matthew B. Ridgway) was alerted for Operation VARSITY, an airborne operation in conjunction with the crossing of the Rhine River by the British Second Army (Gen Miles Dempsey), with the date to be March 31, 1945. The Corps was relieved from the US 1-A (Gen Courtney Hodges) and proceeded to base in Epernay, France, closing there on February 14, 1945.

c. During the planning phase numerous conferences were held to button up the multitude of details as a pre-requisite to the successful mounting of a combined river crossing and airborne operations. A detailed account of all the general and special staff conferences is not within the scope of this report, but it should be recorded that the staff planning of the tactical and logistical aspects of the operation, both air and ground, contributed in large measure to its successful execution. Three (3) major conferences were conducted by Headquarters, Second British Army resulting in the adoption of the following broad plan as it affected operations of XVIII Corps (Airborne):

D-Day
– March 24, 1945
D-3
Air neutralize enemy air by bombing airdromes, particularly those used by jet-propelled aircraft; sweep on D-Da
D-1
– 1730, RAF heavy aircraft bomb Wesel
– 1800, Massed artillery begin all night preparation
– 2100, 30th British Corps launch assault crossing the Rhine River on one (1) division front to seize a bridgehead in the vicinity of Rees
– 2200, British 1st Commando Brigade cross the Rhine and launch sneak attack on Wesel
– 2230 to 2245, RAF bomb Wesel at the request of the 1st Commando Brigade
D-Day
– 0200, The 12th British Corps launch assault crossing of the Rhine north of Wesel with the 15th (Scottish) Division; seize Bislich (A1443) and advance on Bocholt (A2260) and Borken (A3961)
– 1000, (P Hour) the 6th British Airborne Division and the US 17th Airborne Division begin simultaneous drops in the area northwest of Wesel. Drops and landings are to be completed by 1245 on D-Day. (Paragraph 2, Plan of Commanding Generals, XVIII Corp (Airborne) for further details of initial mission and subsequent employment of airborne units to exploit the bridgehead.
– 1300, Resupply by air.

a. Mission of the XVIII Corps (Airborne): To disrupt the hostile defense of the Rhine north of Wesel by seizure of key terrain by the airborne attack in order to rapidly deepen bridgehead, facilitate crossing by the British Second Army and link-up with the US Ninth Army; then be prepared for further offensive action eastward on the British Second Army Order.

c. Initial Mission US 17th Airborne Division: To drop during daylight, March 24, 1945, beginning at P Hour; seize, clear, and secure the Division Areas with priority to the high ground east of Diersfordt in the general area (181449 – 183443 – 191441), and the bridges over the Issel River from (253439) to (235458) (both inclusive); protect the right (south) fank of the Corps; establish contact with the British 1st Commando Brigade, the British XII Corps and the British 6th Airborne Division. Objectives are to be held at all costs. 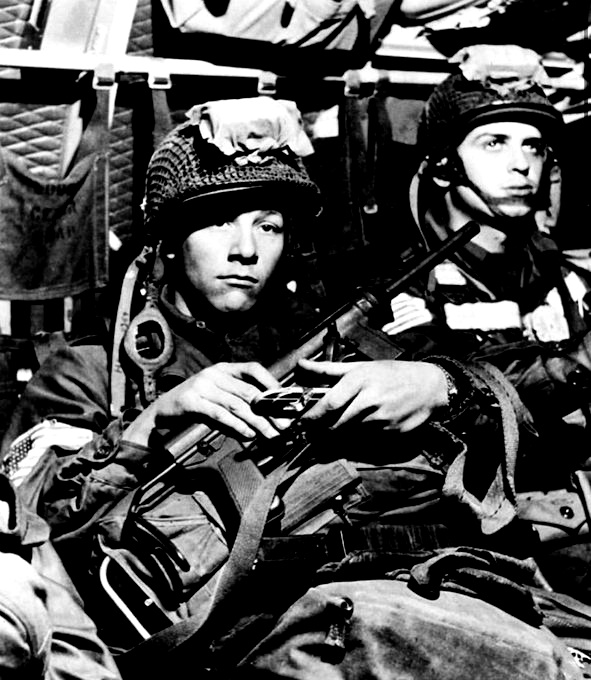 Popping in to say you should listen to Rachel Maddow's podcast, Ultra. It lays out a very important, eye-opening story, told by the best storyteller. https://podcasts.apple.com/us/podcast/rachel-maddow-presents-ultra/id1647910854

Set up your Token Gallery and then show it off!!!

Greater love has no one than this: to lay down one’s life for one’s friends.

I hope to attend the United State Military Academy at West Point and study chemistry or chemical engineering and minor in mathematics. With this, I hope to graduate and become an active-duty commissioned Army officer to serve the United States. #YLT23Takeover #EllaD

Surely it’s just a coincidence that the Biden Administration is investigating one of @elonmusk’s companies at the same time Musk is releasing the truth on the Hunter Biden #TwitterFiles.

How To Get To An Extreme Level Of Motivation Rapidly - https://buff.ly/2ljtFne