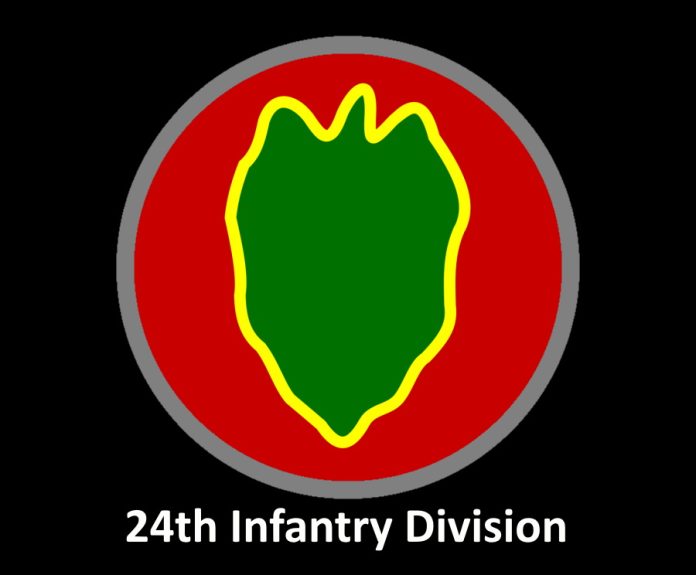 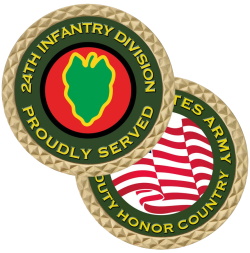 The 24th Infantry Division traces its lineage to Army units activated in Hawaii. It was activated under the Square Division Table of Organization and Equipment (TO&E) on March 1, 1921 as the Hawaiian Division at Schofield Barracks, Oahu. The division was assigned the 21st Infantry Regiment and the 22nd Infantry Regiment, both of these regiments being assigned to the of which had been assigned to the 11th Infantry Division prior to 1921. The entire Hawaiian Division was concentrated at a single location during the next few years, allowing it to conduct more effective combined arms training. It was also manned at higher personnel levels than other divisions, and its field artillery was the first to be motorized. 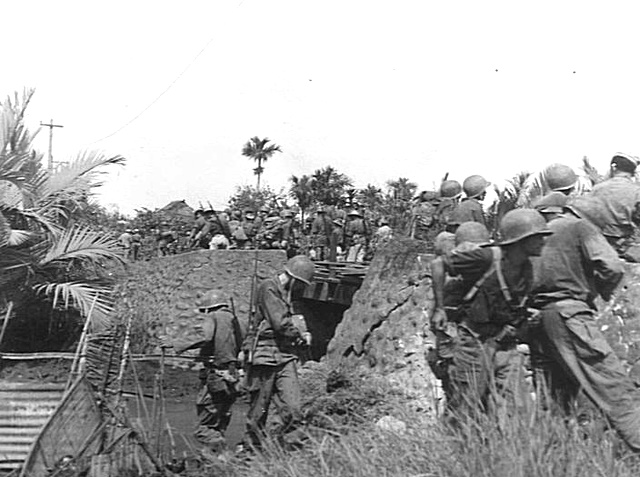 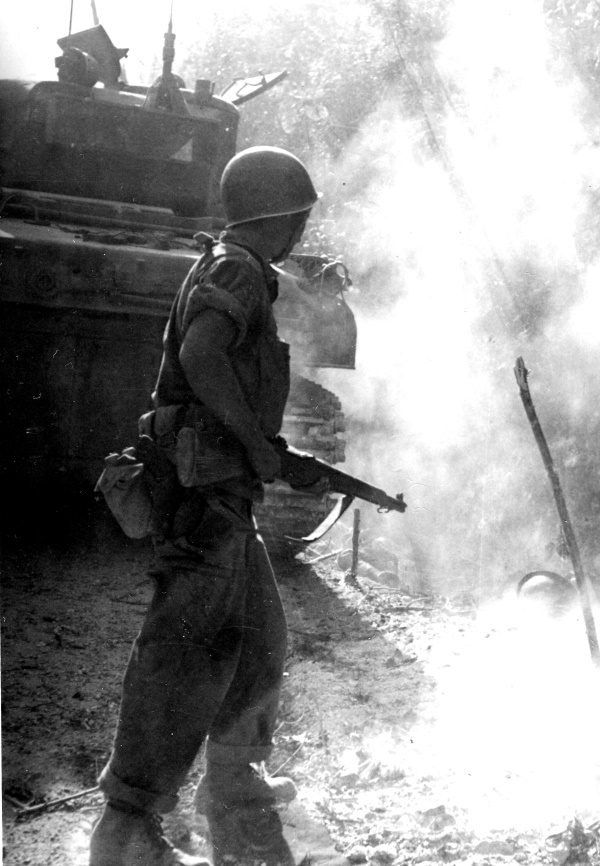 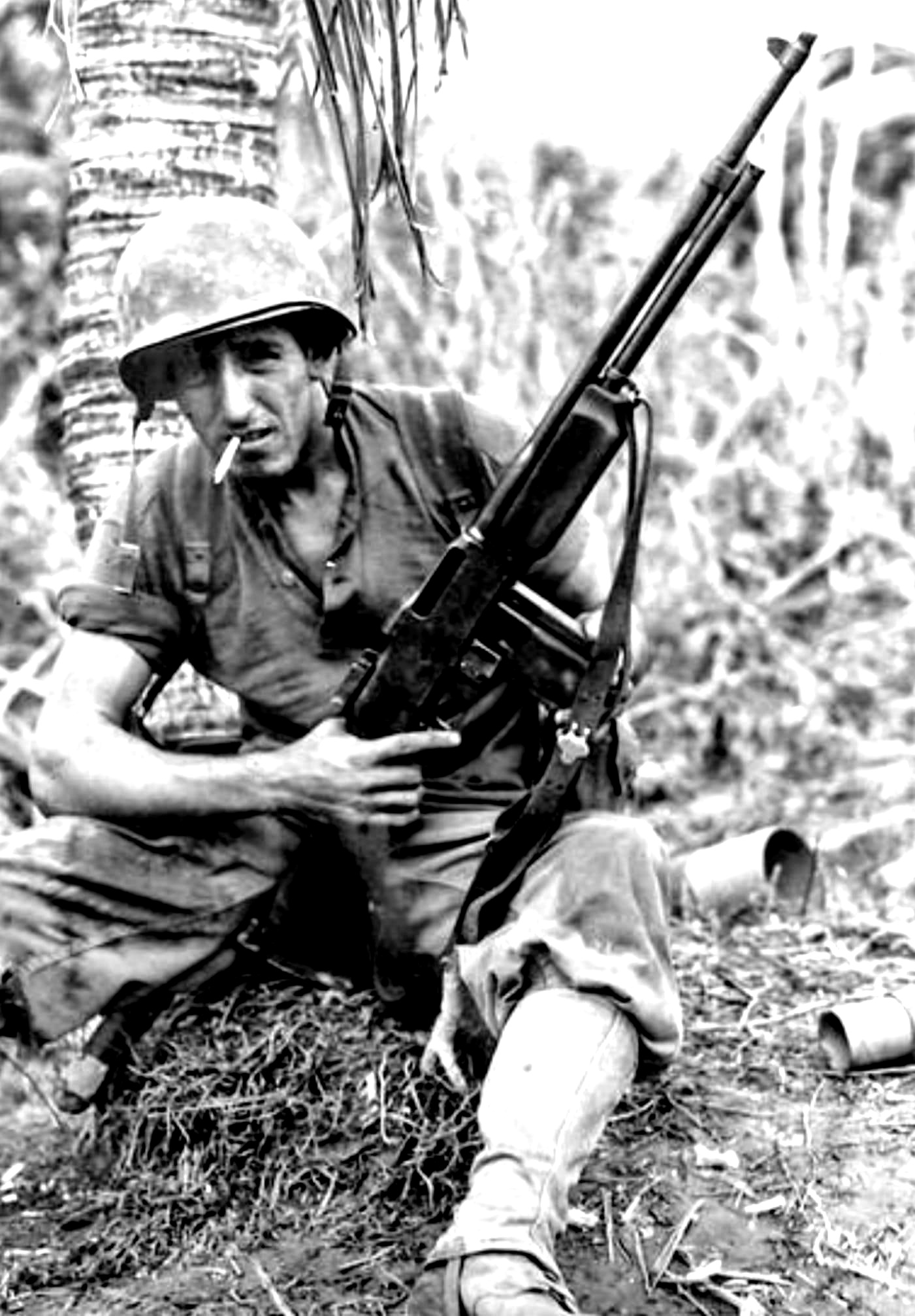 The division was stationed at Schofield Barracks, Hawaii, (Pearl Harbor) when the Japanese planes attacked it on December 7, 1941n and directed as a result to build an elaborate system of coastal defenses on Northern Oahu. In May 1943, it was alerted to Australia and completed movement there by echelon on September 8, 1943, training at Camp Caves near Rockhampton. It staged and rehearsed at Goodenough Island on February 15, 1944, after which the 19-IR and the 21-IR Inf landed at Tanahmerah Bay, New Guinea, on April 22, 1944, and the 34-IR went ashore at Humboldt Bay. Despite torrential rains and marshy terrain the 21-IR overran the Hollandia airdrome and linked up with the 41-ID on April 26, 1944. The division engaged in extensive patrolling of its area until June 6, 1944. On June 15, the 34-IR was detached to Biak Island where it seized both Boroke and Sorido airdromes on June 20 and then mopped up, rejoining the division on July 17.

After occupation duty at Hollandia, New Guinea, the division assaulted Leyte in the Philippines on October 20, the 21-IR landing in the Panaon Straight area and the rest of the division assaulting the Palo-Pawing area, seizing key Hill 522 in heavy combat. The 34-IR was subjected to a fierce Japanese counter-attack on October 21, while the 19-IR took Palo and underwent counter-attacks.

he 34-IR, supported by naval gunfire and air support, secured its Pawing area and both regiments pushed into the Leyte Valley (October 26) where they linked up with the US 1-CD converging on Carigara near the Northern entrance of Ormoc Valley on November 2. The 21-IR relieved the 34-IR at Breakneck Ridge West of Pinamopoan, Novermber 5, and assaulted it despite a raging typhoon, gaining its crest finally on November

12. The 32-ID relieved the division on November 17, and it moved to Jaro and Cavite, attaching the 19-IR to the US 6-A on November 20, for operations on Mindoro as the major unit of the Western Visayan Task Force. The 34-IR battled for Kilray Ridge until December 2, under the 32-ID and then moved to Calubian and over water to beach defense at Pinamopoan with the division. The 19-IR invaded Mindoro (December 15) between Caminawit Point and San Agustin, being joined by the 21-IR which became part of the Western Visayan Task Force also on December 30, 1944. The division sent its remaining 34-IR to clear the Northwest part of Leyte, and landed at Taglawigan on December 27, to accomplish its mission. 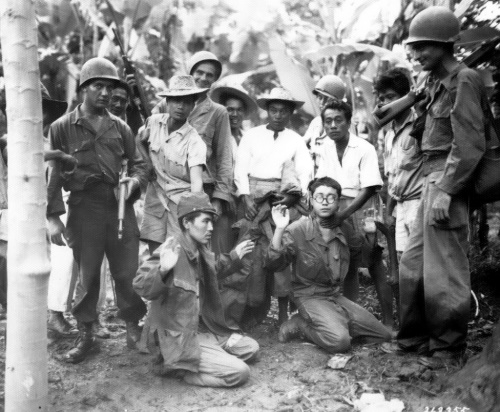 On January 3, 1945, the 21-IR landed on Marinduque Island and then returned to Mindoro, where the division arrived entirely on January 29. The 34-IR landed at San Antonio and suffered heavy losses at the Battle of Zig Zag Pass. The 19-IR was sent to Luzon (February 10) and attached to the 11th Airborbe Division to assist its drive from Nasugbu to Manila. The 19-IR sent a battalion against Corregidor Island, February 16, to assist the paratroopers air-assaulting the fortress. The division meanwhile landed the 19-IR on Verde Island (February 23) and cleared several adjacent islands by March 25, which included Lubang, Ambil, Cabra, Golo, Romblon, and Simara; the 34-IR joining these operations (February 28) and the 19-IR joining the offensive on March 7, 1945.
The division landed the 21-IR at Baras and the 19-IR at Parang on Mindanao on April 17. Filipino forces were alreadv in possession of Malabang, and the division drove overland along Highway 1 with the 19-IR as the 21-IR made amphibious drives up two branches of the Mindanao River. On April 19, the 34-IR in reserve was landed at Parang to reinforce, and moved by water to occupy undefended Fort Pikit and seized the junction of Highway 1 and the Sayre Highway the following day.

On April 24, the 34-IR led the division push onto Digos on Davao Gulf. Despite demolitions and delaying obstacles the 19-IR bypassed and contained Hill 550 commanding the Davao approaches on May 1, and stormed the city on May 3. The 34-IR reduced a Japanese pocket in the Guma sector and the 21-IR, supported by massed artillery fires, attacked along the Talamo River on May 12. The 19-IR and the 34-IR tackled Hill 550, which fell to the latter after a battle of several days on May 21 45. As the division continued to clear the Talamo River Vallev the 19-IR captured Mandog June 9. The end of organized Japanese resistance on Mindanao was declared on June 30, but the division continued operations in the Kibangay area. The 21-IR landed at Sarangani Bay and secured the area on July 12, 1945. The division continued mopping up, patrolling, and performing security on Mindanao until the end of the war.