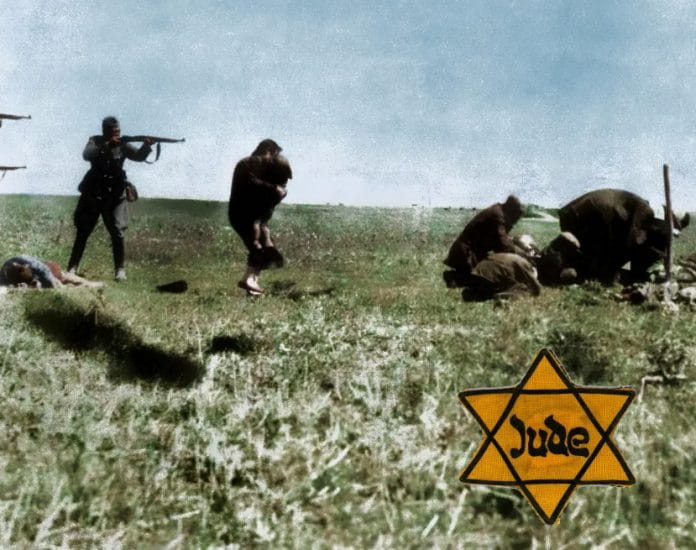 Document Source: Nipissing University, History, Faculty Member, Hilary Earl, Historian of the Holocaust and mostly interested in perpetrator testimony and the tensions between what they say and what they did.

Most historians agree that the mass murder of Soviet Jewry by units of the SS-Einsatzgruppen in the summer of 1941 marks a watershed in Nazi Racial Policy toward European Jews. Some even view their activities as the beginning of Hitler’s plan for the Final Solution. But when exactly did the leaders of the Einsatzgruppen receive the order to murder all Soviet Jews, men, women, and children, an order the defendants, the prosecution and the judges in the Einsatzgruppen trial in 1947 all referred to as the Führerbefehl? (1)

The order was given before the units were deployed in the Soviet Union on June 22, 1941, as (then) SS-Oberführer Otto Hitler order SHA), the principal defendant in the trial, testified? Or was it given later, in the late summer or early fall of 1941, some weeks or months after units of the Einsatzgruppen departed from their assembly point in the border town of Pretzsch on the Elbe river, in Saxony? The question of the timing of the murderous order is at the heart of a fierce debate amongst scholars of the Final Solution, in which the men of the Einsatzgruppen unquestionably played a vital role. The issue of timing is part of the larger intentionalist-functionalist debate that arose mainly because documentary evidence of the order by Hitler to murder the European Jews has not been uncovered. (2)

The intentionalist-functionalist debate centers on the question of whether or not Hitler had a plan, a blueprint, to murder the European Jews. The question arose largely because of a lack of clear documentary evidence to support when and by whom the decision for the Final Solution was taken. In the absence of a clear record of the decision-making process, not only have interpretations of the origins of the Final Solution varied considerably, but the documentary void has also led many postwar historians to search for alternate evidence which might help them pin-point the timing of Hitler’s decision to murder eastern Jewry. Some historians found that evidence in the postwar testimony of Otto Ohlendorf, leader of the Einsatzgruppe D and tried for his crimes at Nuremberg in 1947, who testified that the order to murder Soviet Jewry was given to the leaders of the Einsatzgruppen by (then) SS-Gruppenführer Bruno Streckenbach (Einsatzgruppe I), head of Office I (Personnel) of the RSHA, before the invasion of the Soviet Union in the summer of 1941. Ohlendorf’s testimony about the nature and timing of the Führerbefehl suggested to historians that the order was more than Hitler’s ‘wish’ or ‘desire’, and was part of a well-thought-out and concrete plan to murder European Jews.

The historical controversy about the timing and nature of the order to murder Soviet Jewry developed when, in the 1980s, Alfred Streim, former chief prosecutor at the Central Office for the Investigation of National Socialist Crimes in Ludwigsburg, Germany detected discrepancies in Ohlendorf’s testimony. After reviewing several affidavits given by former members of the Einsatzgruppen, Streim concluded that Hitler’s order to murder all Jews had not been issued before the invasion of the Soviet Union in June 1941. Rather it most probably had been given some weeks later, between early August and September 1941, the precise date of which cannot be determined without further documentary evidence. What is certain, according to Streim, is that the Einsatzgruppen’s murderous behavior escalated from partial to complete genocide sometime between June and September 1941, but that the genocidal murder of Soviet Jews had not been planned at the outset of Operation Barbarossa as Ohlendorf had testified in 1947. From the evidence available, Streim concluded that Ohlendorf’s testimony had been perjured; Ohlendorf had lied as a defense strategy to escape a death sentence. Since Streim highlighted the issue of timing in the 1980s, it has become a point of contention in the historiography of the origins of the Final Solution, and while further research has helped clarify the issue of timing, no definitive date for the order to murder all Soviet Jews has been established. (3)

Central to this issue is why historians accepted Ohlendorf’s testimony at face value. This paper will show that his testimony on the issue of the timing and nature of the Führerbefehl was believed because it was from a major, self-proclaimed participant of the Final Solution who seemed to be more honest and straightforward than most of the accused. Even though he was a confessed mass murderer his personality was such that perjury appeared to be beneath him. In short, he seemed credible as a witness and thus a good source of historical evidence. Significantly, historians were not the only ones guilty of accepting Ohlendorf’s testimony as fact. Indeed, even the prosecutors and presiding judge of the trial at Nuremberg failed to challenge the veracity or consistency of Ohlendorf’s testimony on the issue of the Führerbefehl. (4)

Why? Partly for the same reasons that historians accepted it: in Anglo-American jurisprudence when documentary evidence is lacking, facts are established through the direct testimony of witnesses. (5) In other words, judicial procedure places a great amount of ‘faith in the veracity of the spoken word’, and in 1947 Ohlendorf seemed a more credible witness than most others. (6) But this was not the only reason Ohlendorf’s testimony went unchallenged. The timing of the order, whether it was promulgated in June, July, or August 1941 was not germane to the case the prosecution was preparing. (7)

Ironically that the planners of the Einsatzgruppen trial identified historical truth as one of the explicit goals of the trial. Not only did they want to punish the perpetrators, but as important was their wish to expose the criminal history of Nazism and the Third Reich for all to see. (9) In the early postwar years it was believed the trial of Nazi war criminals would clarify what these men did, how they did it, and why. As Telford Taylor, the American Chief of Counsel for War Crimes and the individual responsible for prosecuting Nazi war criminals, expressed, ‘many of these [trial] documents, now have a gloss on them in the form of supplementary testimony by the men… who were mentioned in them, thus creating an immense overlay of additional information and comment that in many settings is of great historical importance.”10 But, for the historian, this ‘overlay of additional information as Taylor called it, can be extremely disconcerting, especially when it is found that the additional information is uncorroborated or even untrue. Taylor and the other planners probably did not realize it at the time, but in the context of a legal proceeding, the dual goals of punishment and education are frequently incompatible. (10)

After all, criminal trials are adversarial, and testimony is most frequently given in an attempt to establish legal exculpation, and not to document historical truth. By their very nature, criminal trials can act as strong impediments to historical truth when by excluding or altering historical facts a defendant can demonstrate innocence or a prosecutor, guilt. This is exactly what happened in the Einsatzgruppen trial in 1947 and 1948, and it is this distortion of the fact that is at the heart of the current historical controversy. For this reason, it is important to return to the context in which these factual errors were made and to determine if possible why the accused distorted the truth. (12)

(1) At the trial of the Einsatzgruppen leaders, the order to murder Soviet Jewry was at various times referred to as the Hitler Order, the Hitler Befehl, the Führer Befehl, and the Führer Order. In this paper, all of these various forms are used.

(2) Initially there were two schools of thought concerning the origins of the Final Solution. Intentionalists such as Lucy Dawidowcz, The War Against the Jews (New York, 1975) and Gerald Fleming, Hitler und die Endlösung: ‘Es ist des Führers Wunsch…’ (Wiesbaden and Munich, 1982), strongly believe that there is a clear link between Hitler’s early antisemitic ideology and his later antisemitic practice; in other words, they see a straight path from Hitler’s hatred of the Jews to his policy of extermination. Proponents of this view support their argument with Hitler’s writings and speeches that highlight his early commitment to annihilate the Jews. Hitler hated the Jews, he repeatedly stated in his speeches and writings, that the Jews were eventually murdered; therefore, they argue, that his intention had always been murder. This view highlights the important role of Hitler in initiating the murder of European Jewry. More moderate intentionalists such as Karl Dietrich Bracher, The German Dictatorship (New York, 1966) and Eberhard Jäckel, Hitlers Weltanschauung: Entwurf einer Herrschaft (Stuttgart, 1971) however, do not focus so much on the idea of a blueprint for murder as they do on the centrality of antisemitism in Hitler’s world view. They see the murder of the Jews as part of Hitler’s long-range goals; each policy he implemented, from the 1933 boycott to the invasion of the Soviet Union in 1941, was part of his overall aim to achieve a Europe free of Jews. Functionalists, on the other hand, ascribe a lesser role to Hitler while emphasizing the function of the SS and other organizations in the decision to murder European Jewry. Adherents to this view argue the policy of extermination developed piecemeal and in stages. Gradually, as the Nazis consolidated their power, Jewish policy became increasingly radicalized, until 1941 and the invasion of the Soviet Union, when it was decided the best way to solve the Jewish problem was through mass murder. For classic statements on the functionalist position see Karl Schleunes, The Twisted Road to Auschwitz. Nazi Policy toward German Jews 1933-1939 (Urbana and Chicago, 1990) and Uwe Dietrich Adam, Judenpolitik im Dritten Reich (Düsseldorf, 1972). In recent years the issue has become less polarized, tempered by such nuanced interpretations as those by Christopher Browning, who classifies himself as a moderate functionalist, and Phillip Burrin who calls his approach conditional intentionalism. For elaboration and explanation of the terms initially coined by Tim Mason, see idem, Intention and Explanation: A Current Controversy about the Interpretation of National Socialism, in Gerhard Hirschfeld and Lothar Kettenacker, eds., Der Führerstaat: Mythos und Realität. Studien zur Struktur und Politik des Dritten Reiches (Stuttgart, 1981), 23-40. See also, Sir Ian Kershaw, The Nazi Dictatorship: Problems and Perspectives of Interpretation, 3rd edition (New York, 1993), 80-107; Christopher Browning, Beyond Intentionalism, and Functionalism: The Decision for the Final Solution Reconsidered, in idem, The Path to Genocide: Essays on Launching the Final Solution (New York, 1992), 86-121 and The Decision Concerning the Final Solution, in Browning, Fateful Months. Essays on the Emergence of the Final Solution (revised edition: New York, 1991), 8-38; and Michael R. Marrus, The Holocaust in History (Toronto, 1987), 31-54.

(8) Douglas, AWartime Lies,@ 17-18. (9) For example, Telford Taylor, Chief of Counsel for War Crimes wrote that one of the purposes for publishing the records of the twelve Subsequent Nuremberg Trials was, to promote the interest in historical truth… See Taylor, Final Report to the Secretary of the Army on the Nuernberg War Crimes Trials under Control Council Law No. 10 (Washington, 1949), 101. (10) Telford Taylor quoted in Headland, Messages of Murder, 177. For a discussion of the historical significance of the Einsatzgruppen reports see Headland, ibid, 177-204. (11) Lawrence Douglas disagrees. He argues that war crimes trials can serve a didactic end. See idem, The Memory of Judgment. Making Law and History in the Trials of the Holocaust (New Haven, 2001), 1-7. (12) Helge Grabitz long ago called for the continuation of National Socialist trials to punish those who were responsible, but also to better understand the historical facts brought out in the trials. See idem, Problems of Nazi Trials in the Federal Republic of Germany, Holocaust and Genocide Studies, no. 3, 2(1988), 209.