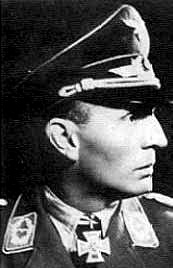 Oberstleutnant von der Heydte had already jumped with a broken arm held in place in a leather sleeve. Totally exhausted and completely disillusioned following the obvious failure of the mission entrusted to him, only after having passed almost a week, days and nights, in one of the most hostile parts of the Belgian Ardennes, the high fens, gave the order to the men of his combat group to disassemble and to rejoin the German lines by all means. The equipment that had been parachuted in with his men had not been found and the few containers the men had been able to collect contained only equipment destroyed mainly by the force of the shock when they smashed on the sound, even suspended to their parachutes. The planned resupply mission had not been carried out or had simply been forgotten by the Luftwaffe, leaving the men in the forest without water and food, a means of keeping warm, and above all, without the slightest means of communication with any adjacent German troops. According to the orders of their Group Commander, the men set off in small groups of three or four and went eastward following the Helle River towards Germany, which they knew was less than 20 KM away. Some managed to regain the German lines, some others were captured while von der Heydte, at the end of his forces, decided to go to the small house located just next to the border post of Mützernich, and asked the inhabitants to contact the Americans to obtain an ambulance and its evacuation to a medical post. From now on, the war was over for the Lion of Carentan but the exceptional man that he was, militarily speaking, was saved from a tragic end like millions of German soldiers before him.

Oberstleutnant Friedrich August Freiherr von der Heydte being a man of honor, before setting out for Germany, wrote a few lines on a piece of paper to the attention of Gen Maxwell D. Taylor (101-A/B) that he thought in the region and handed the handwritten note to one of his American prisoners before releasing them requesting that he hand over the document to US authorities. The handwritten note said the following:

North of Mont Rigi
To Gen Maxwell D. Taylorn commander of the 101st Airborne Division
General:
I herewith send you six American soldiers which we have captured and a few German soldiers from my regiment hurt during the landing. You will remember me. We have fought against each others at Carentan and in Holland. At Carentan you asked us to surrender. I know ask you to please treat my jump casualties as well as my regiment treated casualties of your division, as you will well know.
Respectfully
Oberstleutnant Friedrich August Freiherr von der Heydte
Commander of a Paratroopers Regiment

(1) The airborne operation (Stoesser) assigned to Kampfgruppe von Der Heydte is approaching its final curtain. The commanding officer, Oberst von Der Heydte has surrendered at about 0800, on December 22, in the vicinity of Monschau. He had expected to find the town of Mützenicht in German hands, knowing that a German attack had been planned on the town some days ago. Suffer­ing from trench foot and exposure he went into a house and asked the occupant to summon our troops so that he might surrender. The following is the story of the operation.

a. On December 12, 1944, he was summoned by SS Orbergrüppenfuhrer Sepp Dietrich, CG of 6.Panzer-Army, to receive the parachutist’s mission, that of cutting the Eupen – Malmedy road and preventing our reinforcements from using the highway. He was told by Gen Dietrich that a big attack was going to roll up the American front and that his unit would be relieved by 1730 on the first day by an unspecified SS Panzer Division. He said he was not briefed on any larger objectives and claimed no knowledge of further airborne landings.

b. His force, he said, was that of a light regiment, consisting of six companies. He named the company commanders, Koehne, Becker, and Peters. The last-named was the heavy weapons company. (Note: no POWs have been in our area from Company Becker). He said that the companies averaged 200 men, which according to the interrogation of several of his officers, is a slight exaggeration. He said that they were transported by two groups of Ju52s. There are 53 planes in a group. The colonel said that barely 30% of the regiment arrived at the original assembly area and that two hours after landing he knew that the mission was doomed to failure. Only twelve machine guns were rounded up and many of the Panzerfaust were lost during the jump.

c. Reasons given by the colonel for the failure of the mission are: (1) Too little time for planning the mission; (2) Too little coordinated training of the personnel assigned to him five days before the operation; (3) The wind, which he said blew at 60 KMH, which scattered his men so far apart that almost 70% never reached the objective; (4) The Ju52s pilots, who were more responsible than the wind for the scattered landings of his men and (5), Once on the ground, the lack of weapons.

d. Von der Heydte had strongly recommended the use of gliders, which he prefers over parachutes, but Gen Dietrich was against the idea. This forced him to abandon the idea of any heavy weapons.

e. Sunday evening, December 17, the unit moved a few kilometers east, then waited there for two more days for the relief to arrive. At noon on December 20, the colonel gave the order to the men remaining, between 200 to 300, to infiltrate through the front lines in groups of two or three and reassemble at Monschau, which he believed was German-held.

f. Communications were disrupted early in the operation. His own radio, the only set with adequate range, went out of operation shortly after the landing. Small handsets, with sufficient range to cover various company positions, were the only radios remaining. The communications officer, they later learned, had jumped near Monschau in error, and was never contacted. The old type Ju52 has no interplane communication, causing the disorganization of the pilots.

g. On the ground, they threw away captured M-1s because they had no ammunition for them. However, they had plenty of carbines and ammunition, booty from Normandy, were those men from the 6.Fallschirmjaeger-Regiment, about 100 in all, had contacted our troops previously. Many men had MP 44s and the balance had K98s.

h. Equipment was good, and in many cases new. Most POWs had new jump boots. They all had sufficient clothing, including heavy sweaters, and were able to stand the cold for the first several days, without too much discomfort. Rations were exhausted after three days.

i. Explaining why they brought gas masks, the colonel said they were protection against our screening smoke, which has a considerable nauseating effect.

j. Col von der Heydte said they had no idea of American reserves. They were well informed as to our units in the line but had no effective means of determining our forces in the rear. He said that when he suggested there might be a large headquarters in Eupen, Gen Dietrich told him that this was unlikely as American Headquarters are invariably located in woods or small villages. 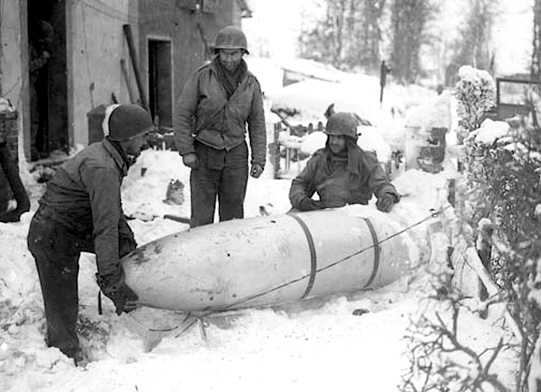 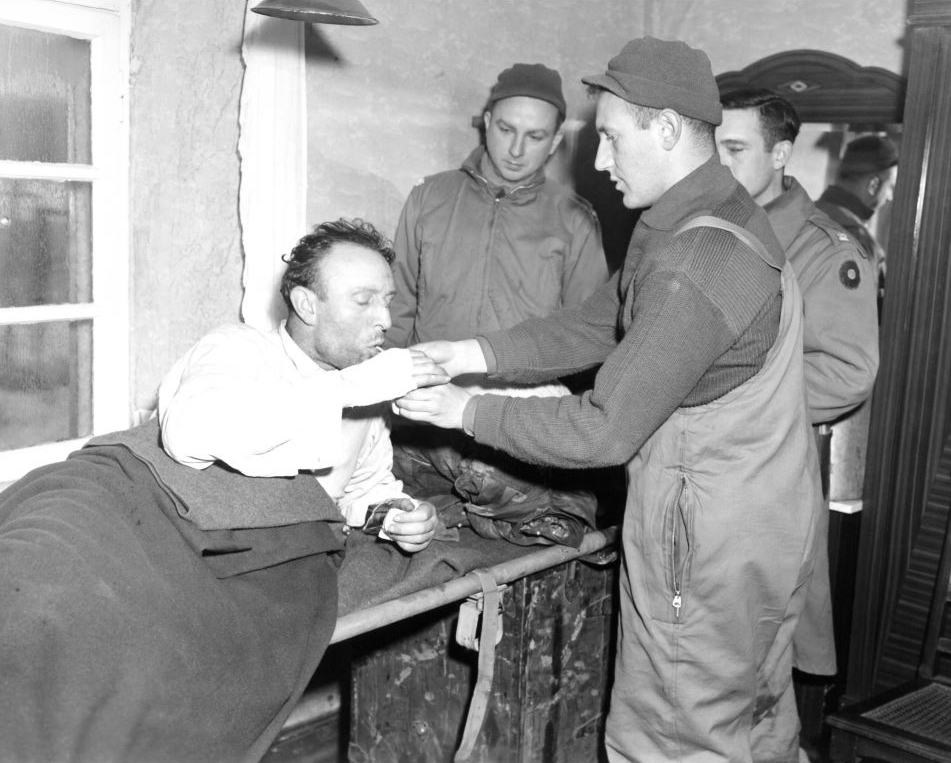 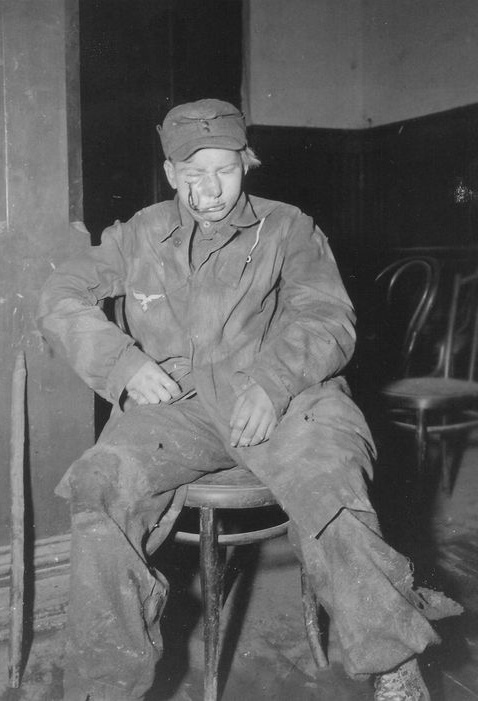 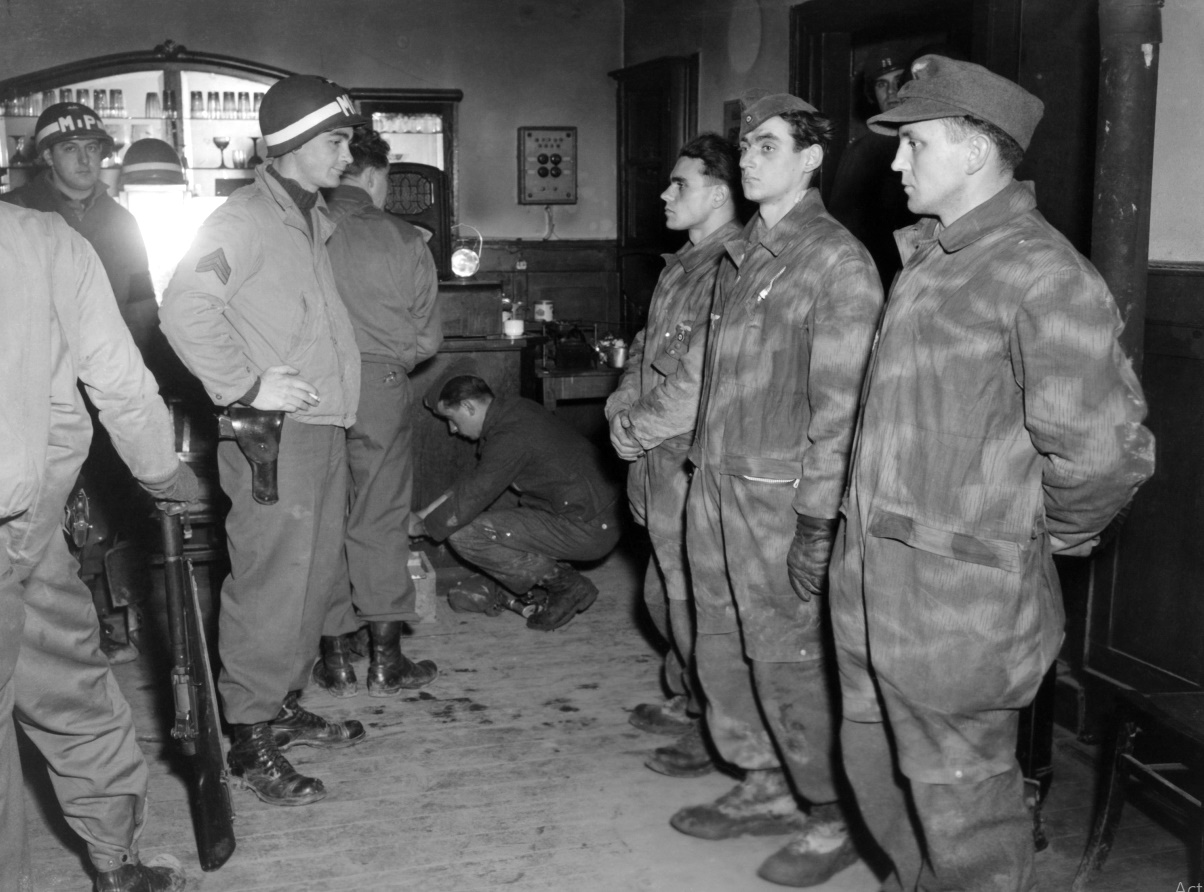 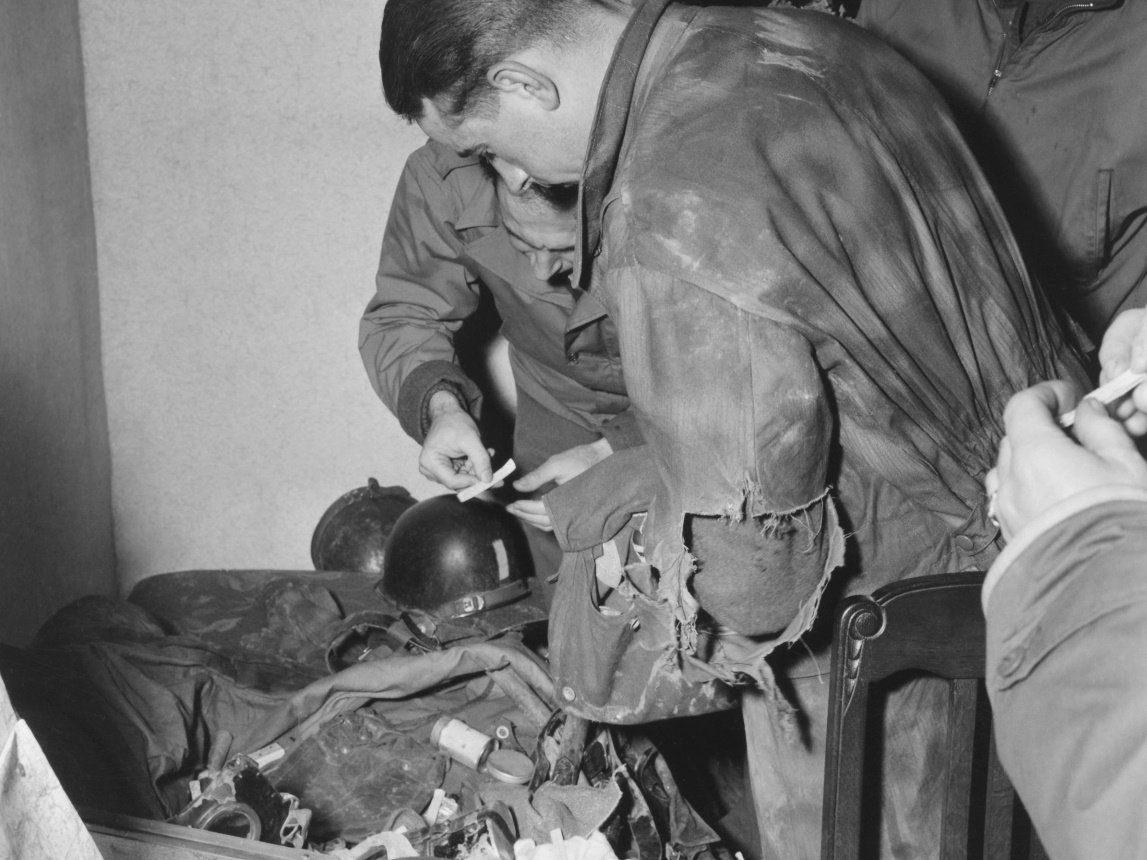 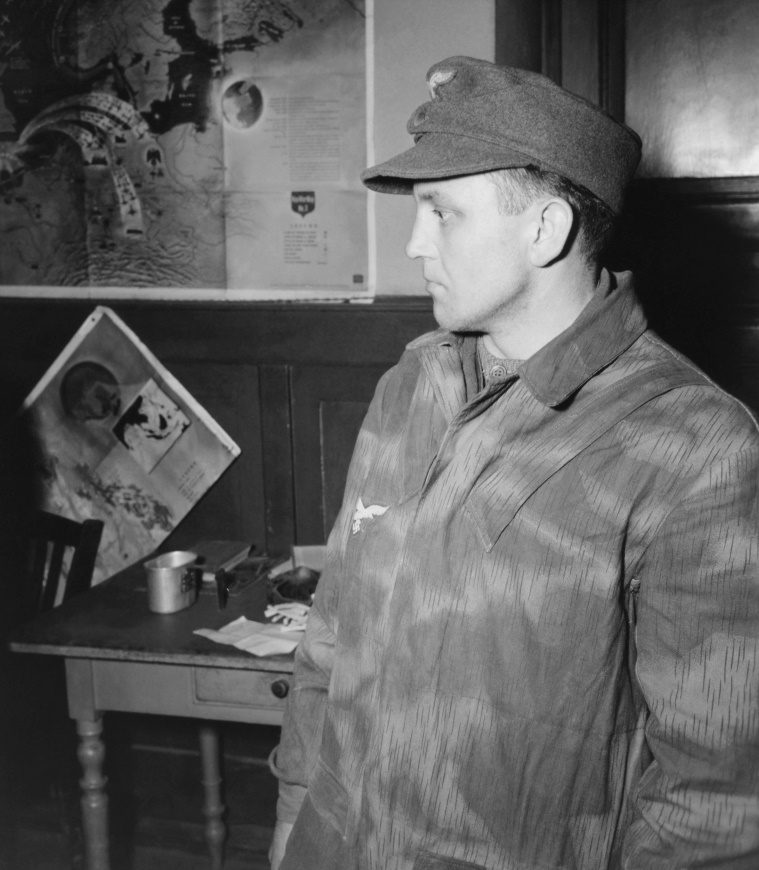 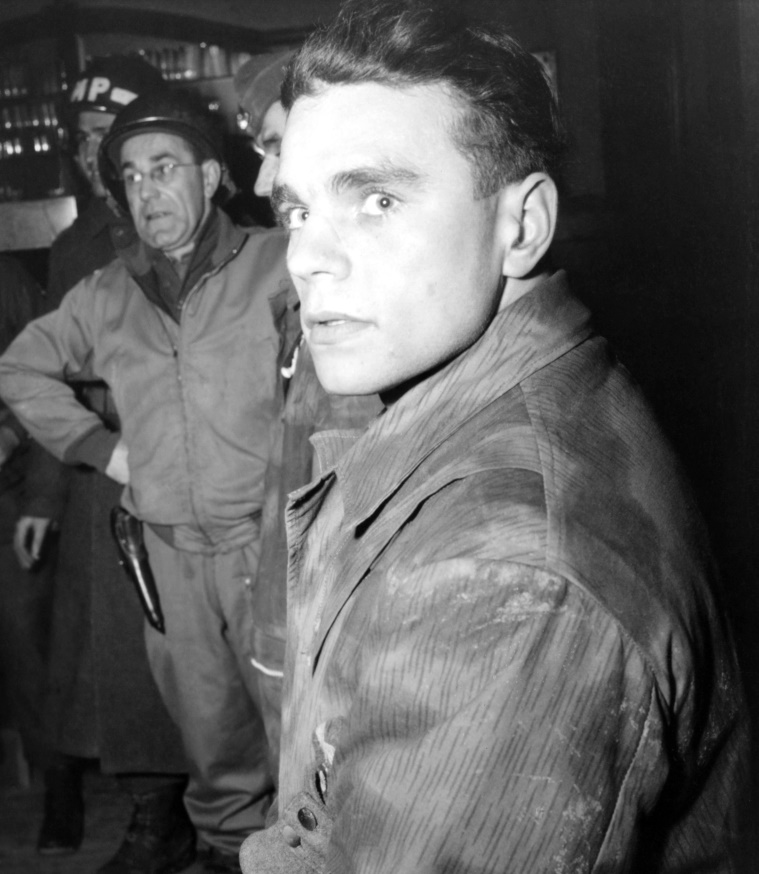 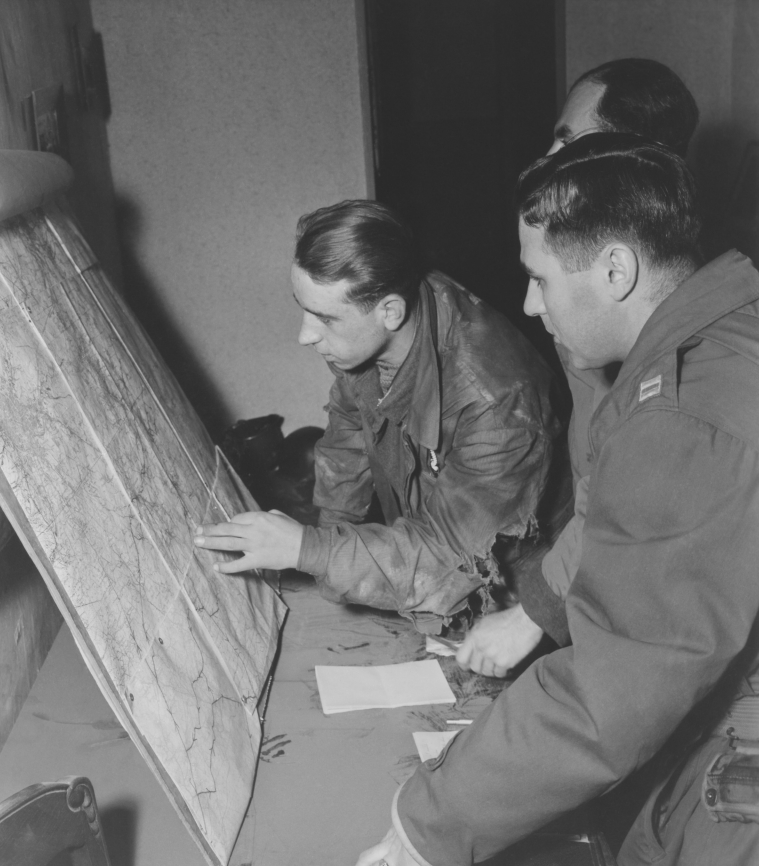 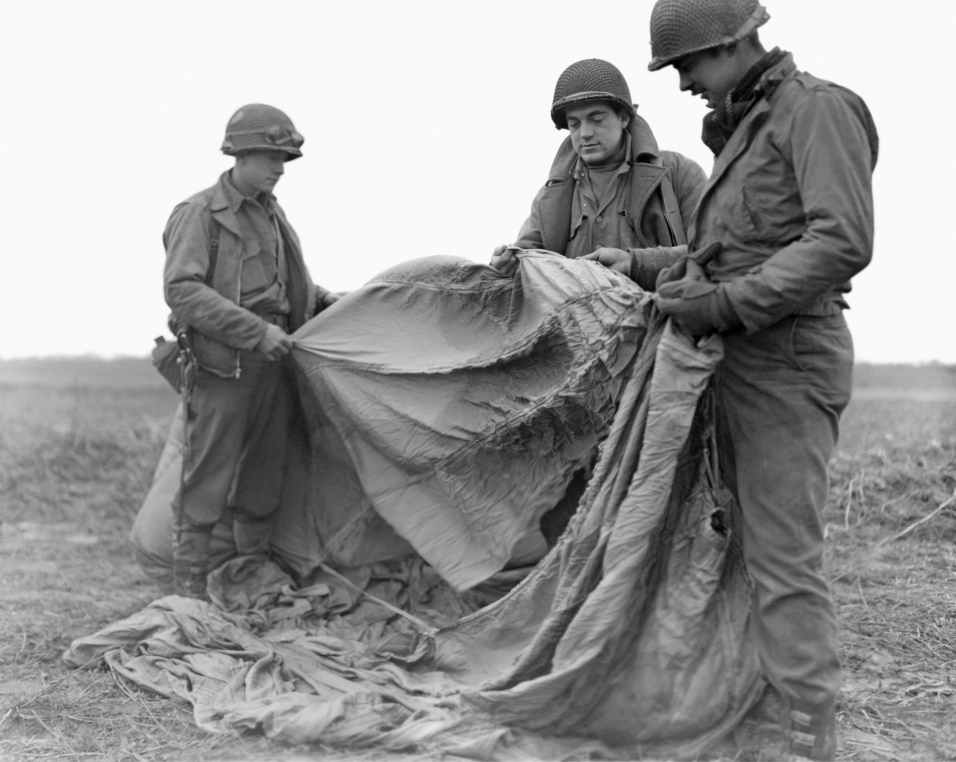 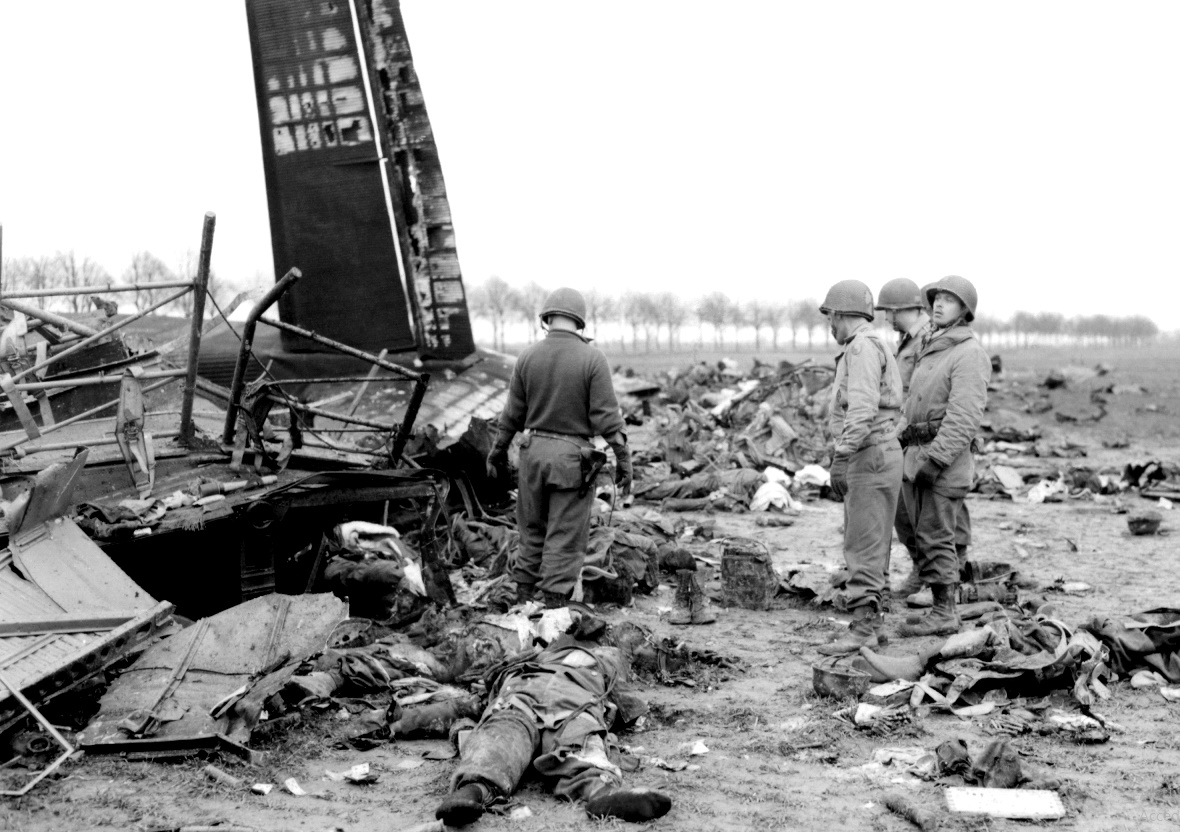