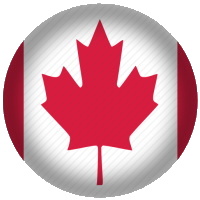 [1] No Canadian Intelligence Officer was present at the detailed examination of PSM Dumais conducted by MI.9. The information included in this memorandum was obtained at an interview that took place on October 23, 1942, 2 days after PSM Dumais’ return to the United Kingdom.

[2] On August 19, 1942, at 0700, PSM Dumais landed from an R craft on the beach at a point 50 yards east of the Casino. This craft contained 20 men from N°3 (Mortar) Platoon, Headquarters Company, Fusiliers de Mont-Royal. Only six men had time to jump ashore before the craft containing the other 14 men and the mortars backed away and put out to sea again. PSM Dumais shouted to the Naval personnel in charge of the craft to put it about again but his efforts were unsuccessful.

[3] PSM Dumais and the 5 other men from the Mortar Platoon found themselves alone on the shore midway between 2 beached Troops Landing Craft, one of which was burning furiously. They were at once exposed to heavy fire from both flanks and there were casualties almost immediately. 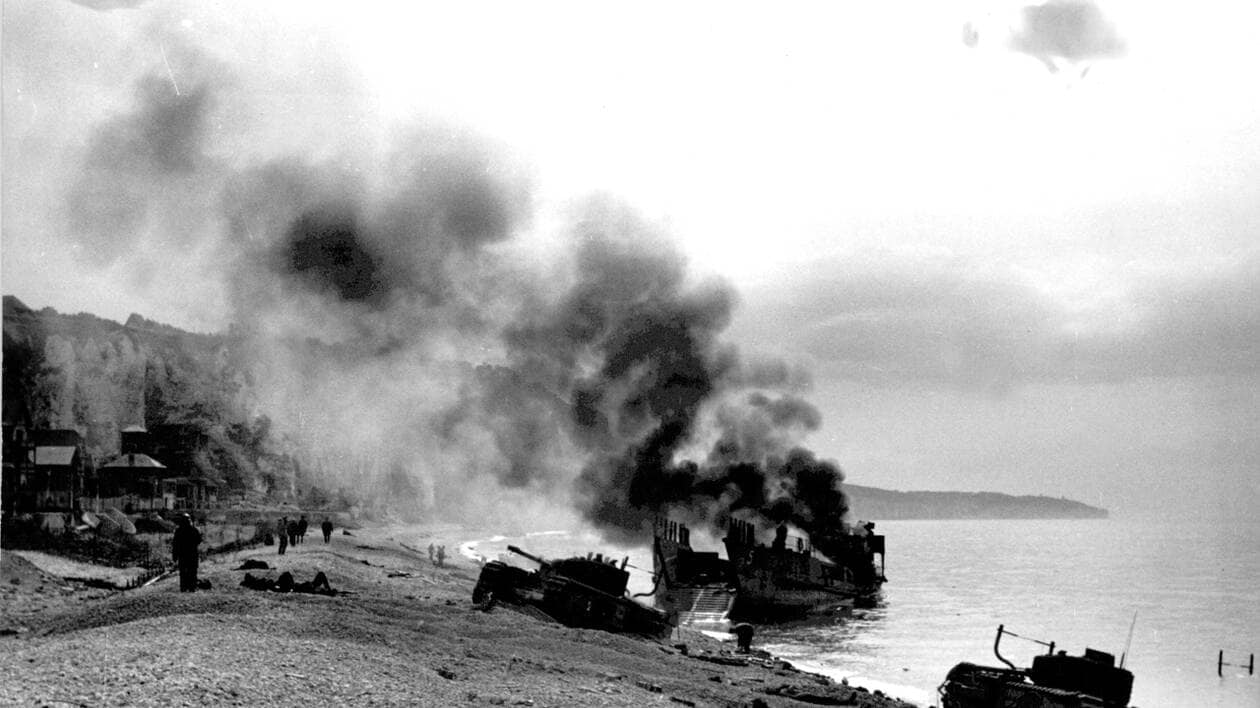 [4] Working his way westwards PMS Dumais met Lt Loranger, Commanding Officer of the N°3 Mortar Platoon, who had made a separate landing with another section of his Platoon. Lt Loranger had been seriously wounded and ordered PSM Dumais to take over the command of the Mortar Platoon.

[5] Followed by Cpl A. Vermette and others, PSM Dumais made for the Casino, which by that time had been cleared of enemy troops. On the way, they found a mortar abandoned by the RHLI (Royal Hamilton Light Infantry) and took it along with them, but as they could find no ammunition they left it behind before actually reaching their first shelter; a sand-bagged position behind the Casino.

[6] While in this shelter they were bothered by Machine Guns fire from a house opposite, but Cpl Vermette finally managed to put the enemy position out of action by fire from his Bren Gun. 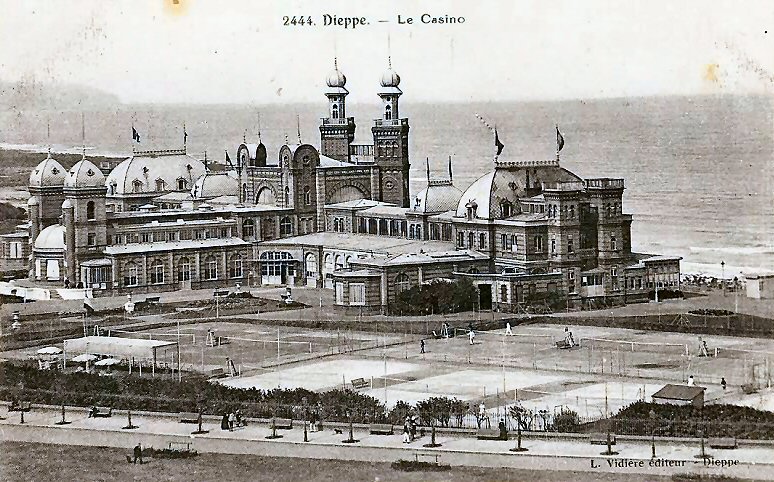 [7] PSM Dumais’ party then entered the Casino proper and worked their way into the east wing. There, 2 enemy POWs were discovered who were at once passed on to the beach for embarkation. While in this part of the building PSM Dumais made a search for documents in a room that had obviously been used as living and office quarters by enemy troops.

[8] The party then went to the west wing of the Casino where Cpl Vermette knocked out 2 more enemy Machine Guns by fire from his Bren Gun. Some RCE personnel helped PSM Dumais’ party to blow the door of a steel safe in this part of the building.

[9] It was approximately 0800 and PSM Dumais went up to the second floor to help organize the defense in that quarter. He then made his way along a trench to a shed on the south of the Casino where he established contact with a lieutenant of the Royal Hamilton Light Infantry who appears to have assumed command of operations on the Casino and its immediate vicinity. From this shed, PSM Dumais was able to observe several British tanks in action. He saw one silence an enemy pillbox to the southeast of the Casino while another, after receiving several direct hits from an anti-tank gun, succeeded in putting the gun out of action and then continued on its way. Incidentally, the successful passage of these tanks effectively disposed of an enemy mortar that had been harassing the party in the Casino. 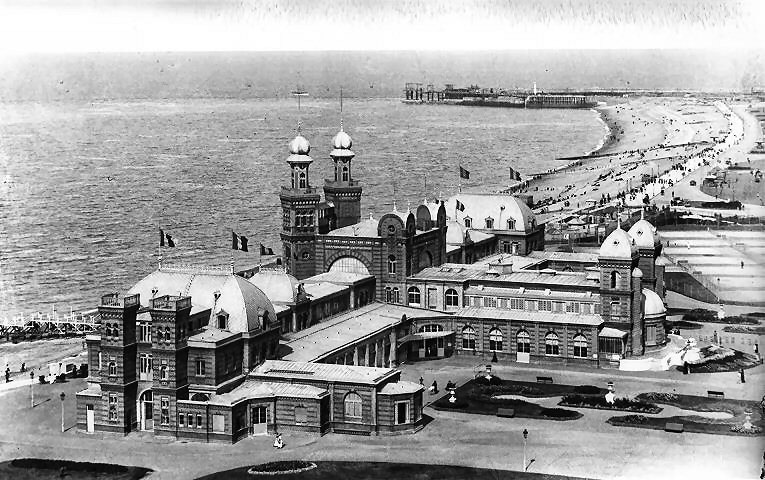 [10] By 1000, enemy fire had diminished to an appreciable extent, though there was still some sniping from the steeple of the St Remy Church. PSM Dumais engaged these snipers himself with another Bren Gun and succeeded in silencing all fire from that quarter.

[11] An attempt was then made, using a Wireless Transmitter from the Royal Hamilton Light Infantry, to establish radio contact with our forces elsewhere and inform them that the position in the casino was now favorable. When these efforts failed, PSM Dumais went back to the beach, where he collected 6 more men to augment the force in the Casino, which numbered about 30 in all ranks.

[12] At about 1230, a plan to attack across the street to the south had to be abandoned because of a lack of smoke bombs for the 2-inch mortars. As the craft was then observed approaching the beach, the Lieutenant of the Royal Hamilton Light Infantry gave the order to withdraw. He himself remained behind to cover this withdrawal and was assisted in this task by a sergeant of his own regiment and by PSM Dumais. 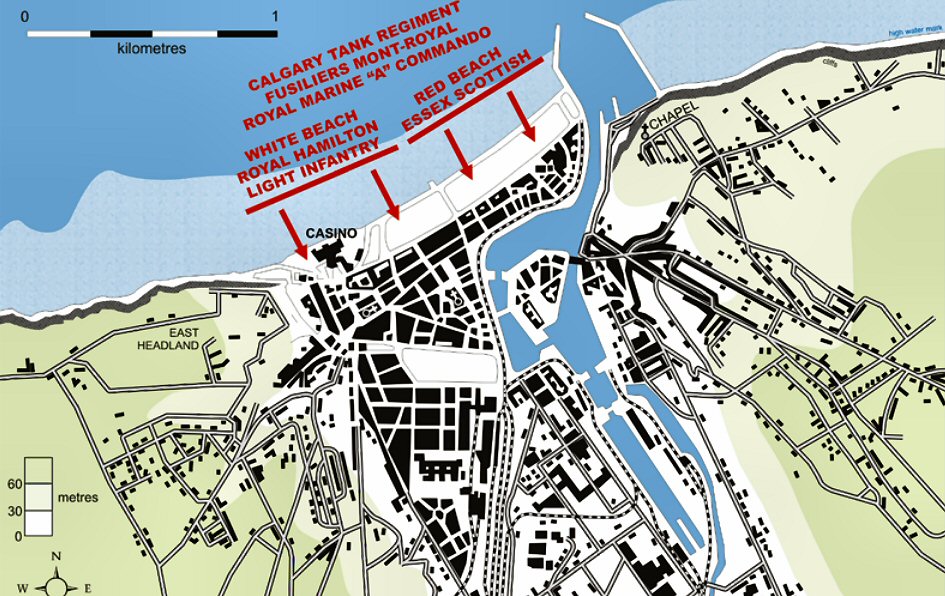 [13] PSM Dumais supervised the evacuation of the wounded and enemy POWs, getting the latter to carry the former to the beach. He helped load a wounded corporal onto a portion of a raft and pushed out with it to a Landing Craft which was laying about 50 yards offshore. He tried to clamber himself but lost his hold and sank into 8 feet of water, borne down by the weight of his sodden pack and equipment. He swallowed a good deal of salt water and was almost drowned before he managed to crawl into the shallows and get his head above the surface.

[14] On getting ashore again PSM Dumais made for the shelter of one of the 2 beached Landing Crafts (#3). Here he found a captain of the RCAMC, Lt Bissonnette of the Fusiliers Mont-Royal, Cpl Desaulniers of the same regiment in a seriously wounded condition, and others who had been unable to get away from the beach. The wounded were given morphia, and a defense system was organized, but the rising tide made the situation untenable and, on the appearance of the enemy in strength on the edge of the beach, our small force surrendered after destroying all maps and documents.

[15] The party was assembled at a spot near the Casino and taken from there to the Dieppe Hospital. Various attempts were made to get the Germans to look after our wounded but they were not attended to, though the German guards permitted French civilians to give the Canadian prisoners water. 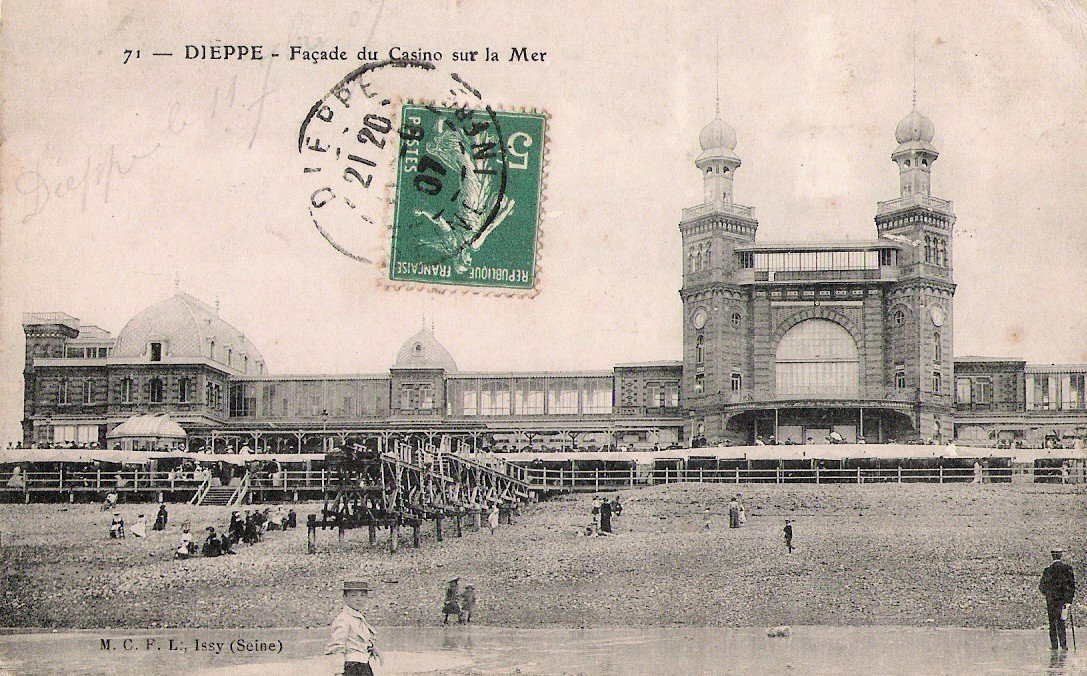 [16] PSM Dumais was then made to march about 6 miles to a sports field where the German Feldgendarmerie were relieved by very youthful-looking Jaeger troops. The column then proceeded further to a factory where they were lodged for the night and given bread, water, and an unpalatable species of tea. There were about 800 POWs on this beach and the supply of water was insufficient for their needs. Some German Medical Officers put in an appearance but they just looked at the wounded and made no attempt to give them treatment.

[17] On August 20, 1942, the Canadian prisoners were let out into the yard in the morning and given a cup of ersatz coffee and an eight-pound loaf of black bread apiece. As soon as breakfast was over PSM Dumais and some of the survivors of his platoon began to make plans for escape. They thought at first of remaining behind hidden in some nearby concrete mixers but observed that the guards had thought of this possibility too. PSM Dumais, who speaks a fair amount of German, got into conversation with some of the Germans and when he spoke to any of them alone, readily got them to admit that they were fed up with the war. 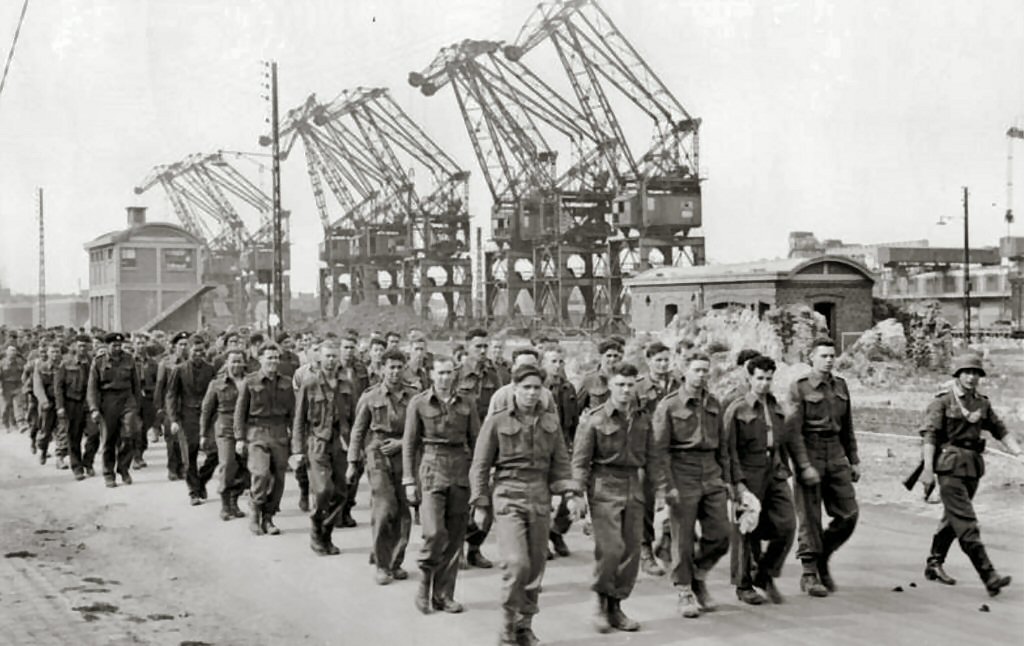 [18] In the course of the morning, a German Interrogation Officer picked out 6 men for interrogation. PSM Dumais wormed his way into the group and urged them not to give away any information. Some of them seem, however, to have been rather shaken by the German IO’s, display of knowledge. According to Sgt Brousseau, one of those interrogated, the officer had on his desk photographs of commando training on the Isle of Wight and declared to the prisoners that they, the Germans, knew all about Operation Jubilee and its cancellation in June and that they had been expecting for some time.

[19] At 1600, the Canadians were marched to a railway station about 8 miles to the southeast of Dieppe, where they were entrained in cattle cars, 20 men to a car, with one sentry to every other car. Prisoners (Officers) occupied a passenger car near the end of the train. There were antiaircraft machine guns mounted on the rear of the caboose.

[20] The train started at 1900 and proceeded by way of Dieppe to Rouen, reaching the latter town after nightfall. The prisoners in PSM Dumais’ car began once again to make plans for escaping, but they had first to deal with a German spy in a British uniform planted among them. A sergeant sat on his head while the others pulled up some of the floorboards thinking it might be possible to escape that way. They decided this was too risky and pulled a bar off the window instead. PSM Dumais, followed by Cpl Vermette and Private Cloutier of his platoon climbed out onto the buffers and jumped in succession when the train slowed down on a gradient to a speed of about 12 MPH. 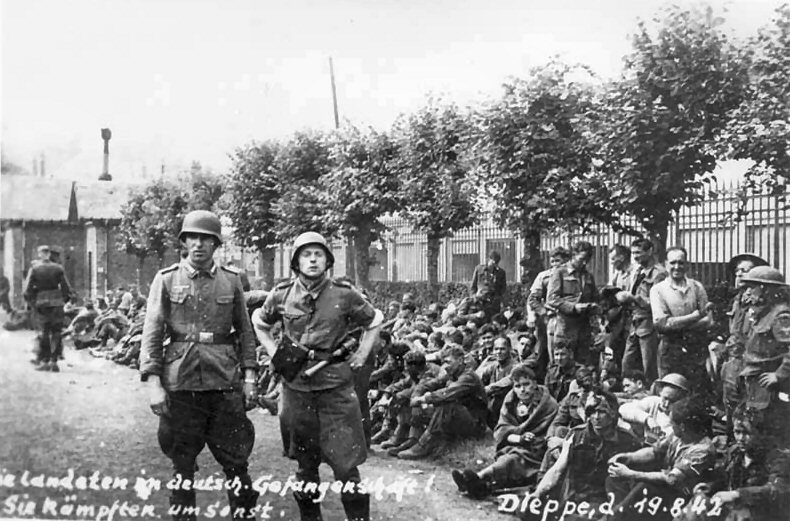 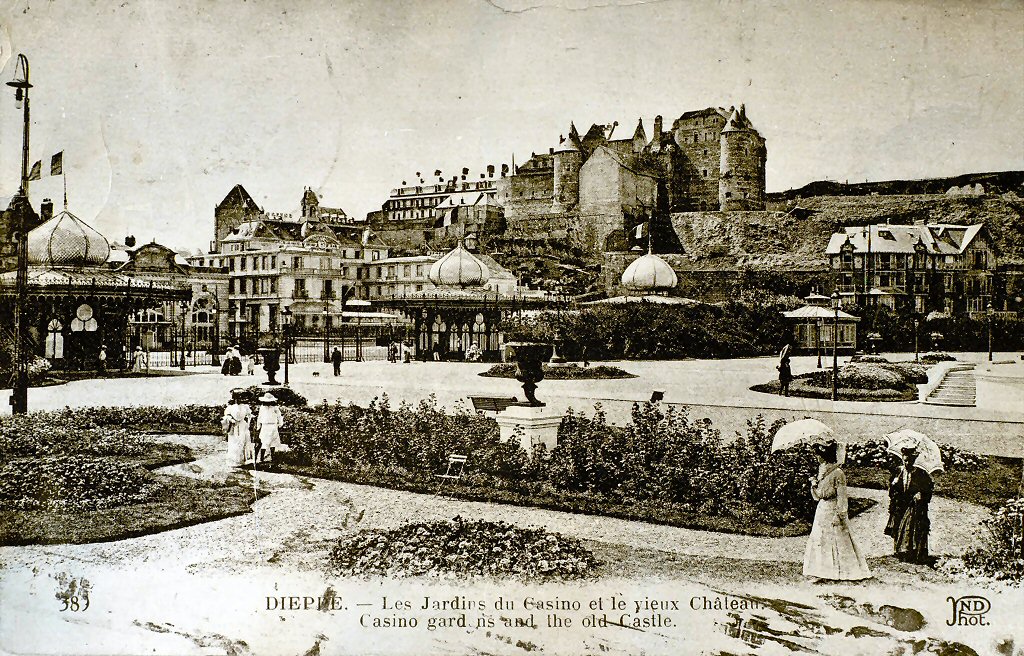 [21] As the train passed him the German guards started firing and PSM Dumais is convinced that a good many other Canadians got clear of the train at about the same time as he did. He was obliged to lie low for some minutes as he observed 2 French Gendarmes patrolling the track in his vicinity. During this time he could hear Cloutier calling his name from a distance.

[22] When the Gendarmes moved on, PSM Dumais walked down the track to look for his companions. He whistled the tune of ‘Un Canadien Errant’ as a recognition signal but failed to find his fellow escapees.

[23] On August 21, 1942, PSM Dumais spent the rest of the night in a barn at Thuit near Elboeuf and in the morning, revealed his identity to the farmer and his wife, who found him a hiding-place in the woods and brought him food.

[24] On August 22, 1942, in the morning, they fitted him out with civilian clothes, gave him 500 French francs, and directed him to a railway station. There he bought a ticket for Poitiers and proceeded that day as far as Le Mans. He found then a farm in the neighborhood of the town where he was allowed to put up for the night and was also directed to a restaurant where the sympathetic proprietor gave him food and a bread ticket.

[26] On August 24, 1942, Poitiers was reached at 0330 and Dumais remained on the platform for 3 hours, when he left without giving up his ticket. He started along the highway toward Limoges in unoccupied France when he was picked up by a lorry driver who, on learning his identity, took him to the Free French Organization in Poitiers.

[27] This organization got him across the Demarcation Line that night and kept him hidden in a hotel in a small country town for 5 weeks. The organization in question sent a wireless message to the Free French in England addressed CMHQ (Canadian Military Headquarters) and gave PSM Dumais’ name, rank, and ASN followed by the words ‘Suis en bonne santé Renterai bientôt’. (I am OK I’ll be Back Home Soon)

[28] PSM Dumais seems to have conducted himself with great bravery and to have shown considerable initiative prior to the surrender. Once he had been taken prisoner he began at once to plan his ultimate escape, while at the same time using his knowledge of German to extract information from the enemy.

Lin Rountree - In the Day

~ Nilofer Safdar ~
From the book CREATE YOUR LIFE

On this day in 1933, Hitler directs his generals to plan for the "ruthless Germanisation" of Eastern Europe. His long-standing goal of achieving 'Lebensraum' or 'Living Space' will now be the official foreign policy of Nazi Germany.

"The Ukrainian government is one of the worst of the world, corrupt and controlled by a few rich people."