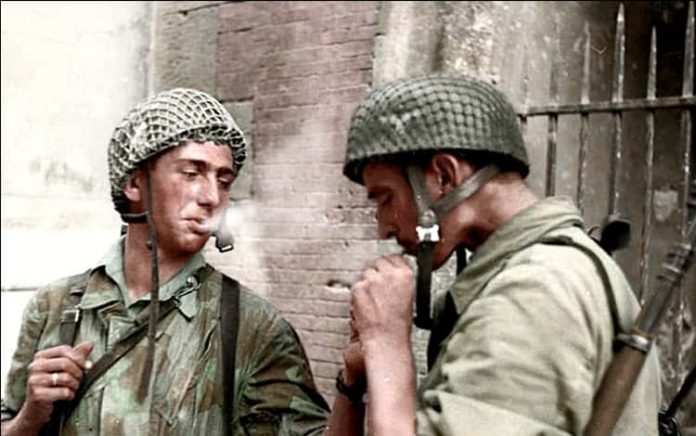 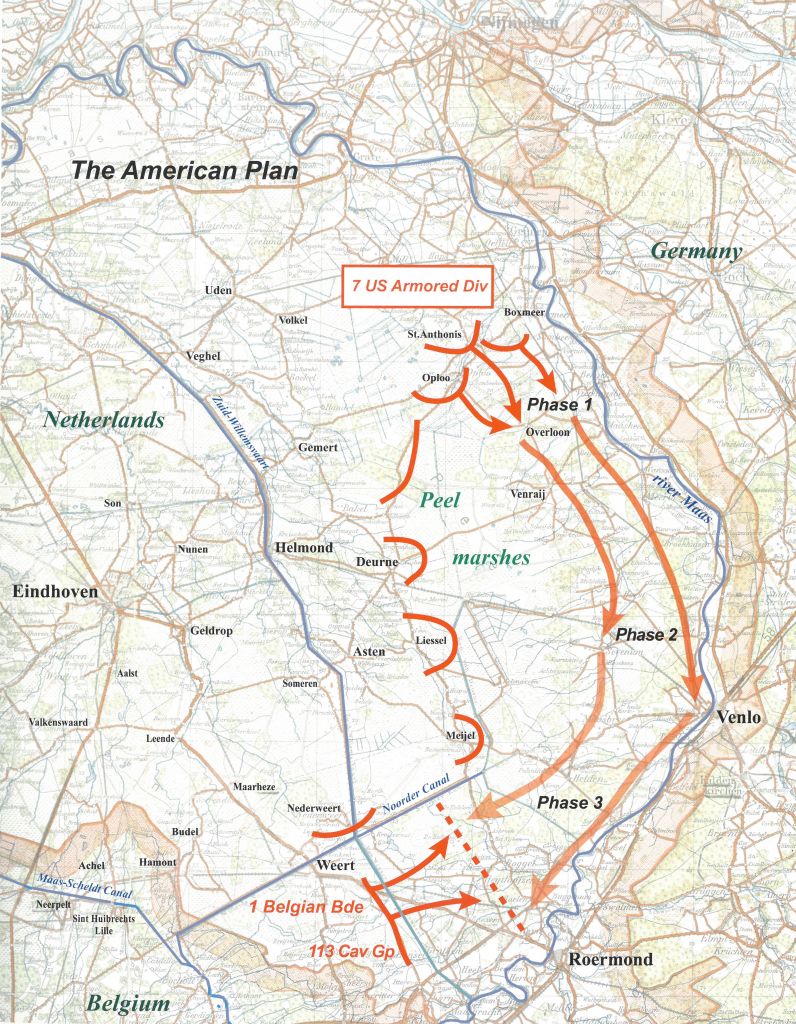 This short battle account, describes the Personal Experience of Capt Leo V. Thieme during the Liberation and the Combats in Holland. The 3rd Platoon, Charlie Company, 1st Battalion, 48th Armored Infantry Battalion, 7th Armored Division, had just completed a six-day motor march as a member of Combat Command A. The almost continuous move greatly fatigued the men, but despite this fact, morale was exceptionally good. Partial reasons for this high state of morale probably could be traced to rumors that the division would be given a quiet sector in Holland because of the many days of tough fighting that it had endured south of Metz, France.

After traveling two hundred and sixty miles the motor march terminated in an assembly area at Oploo, Holland, on Sept 30, 1944. On Oct 1, the units of the Combat Command, which had now been sub-divided into Task Force Brown and Task Force Chappuis, were ready to jump off in the attack on Overloon the next morning. Combat Command A was to attack Overloon from the southwest. This side of the town contained the most wooded area and therefore was decided upon as the beat infantry country. The area was also very flat, enabling the enemy to detect vehicular movement from several miles of distance. On Oct 1, late in the evening, the company commander of Charlie Company (1/48-AIB), summoned his platoon leaders. He pointed to the city of Overloon on the map and remarked, Here it is, fellows. He then issued each platoon leader a roughly drawn copy of his map, an inadequate one itself.

Overloon was estimated to be garrisoned by a company of German Fallschirmjäger with some artillery support. Charlie Co was to attack through the woods with the 3rd Platoon on the right and the 1st Platoon on the left. The 2nd Platoon was to be in support. The 3rd Platoon leader picked up the machine gun and mortar squad leaders who were attached to him for the operation and, in the darkness under a half-track tarpaulin, he oriented his squad leaders on the situation. The 3rd Platoon was to attack with three squads in line and with the supporting squads located to the flank and rear. The squad leaders were ordered to have their squads ready to move out at 0500, which was approximately thirty minutes before daybreak. The unit was located about three and one-half miles from Overloon.

The next morning, Oct 2, the 3rd Platoon left its half-tracks in the assembly area and in about fifteen to twenty minutes was in the attack position, which was about 150 yards in the rear of the line of departure.

Dawn was just beginning to break when the platoon leader signaled the squad leaders to form a skirmish line. The platoon moved forward toward the woods until the leading elements were within fifty yards of them. Suddenly all hell broke loose. Enemy small arms and automatic weapons fire raked the area with a hail of bullets. Many men were hit, and to make bad matters worse, enemy artillery, which had previously been registered, began to fall on the attackers. This, along with the small arms fire, inflicted heavy casualties among the members of Charlie Co. The position in which the platoon leader found himself was a very precarious one. The enemy was too close to call for friendly artillery. The enemy fire was too intense to allow maneuver or withdrawal.

The platoon leader called for supporting tanks and, in about fifteen minutes, two came in from the left flank only to be knocked out by enemy AT guns. Then after another call by the platoon leader, two additional tanks came into the third platoon’s position from an approach that was directly in line with the woods. The 3rd Platoon followed the tanks and with accurate fire and grenade tosses eliminated the fanatical enemy, who refused to surrender. Only four POWs were taken. The platoon reorganized on the captured position and prepared for further action. They were soon forced by heavy enemy artillery and mortar fire to withdraw to their previously held positions. Several vicious enemy counter-attacks were beaten off and one enemy tank was knocked out. The platoon enjoyed very little rest that night. The jeep which was carrying the four captured prisoners to the rear was wrecked and only one prisoner was in condition to be interrogated. He, however, gave a lot of valuable information. He told of the strength of an attack which was to come and the strength of the fortified position. This information brought much more friendly artillery to the sector in question.

On Oct 3, two additional counter-attacks were repulsed. Supply and evacuation were accomplished after dark. Because of the great number of casualties Able Co, 33rd Engineer Combat Battalion was put in on the right of Charlie Co’s sector to fight as infantry. During the night the position was continually harassed by enemy artillery and also by tank hunters, who were trying to eliminate the two supporting tanks.

On the morning of Oct 4, word was received that the 23rd Armored Infantry Battalion would relieve the 48th Armored Infantry Battalion that night. It was learned from prisoners captured during an enemy attack that the positions to the front were constructed so that they would be able to withstand a tremendous amount of artillery fire. These positions had entrances that could not be seen from the front and were mutually supporting. Intelligence gained from the prisoners suggested the use of air. An airstrike of twelve P-38’s bombed and strafed the position. The enemy counter-attacked immediately following the air attack and before this counter-attack was broken up a second airstrike was required to help stop the determined enemy. The relief of the Battalion took place that night, Charlie Co had suffered about 40% casualties and its fighting efficiency and morale were at a low ebb.