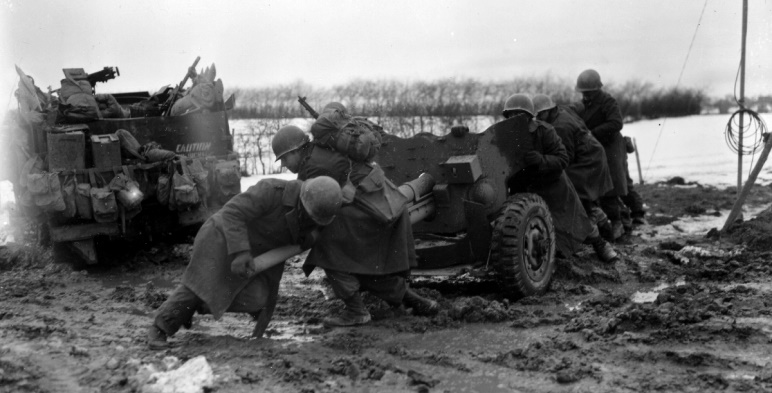 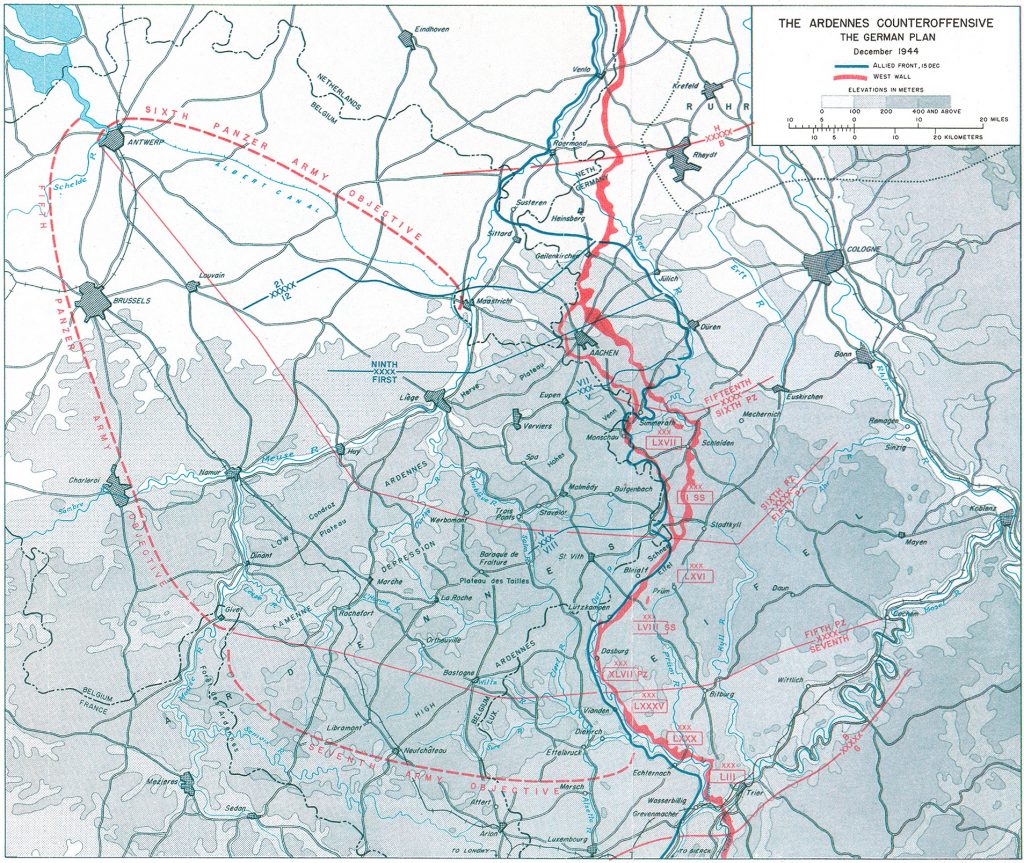 On December 1, 1944, after two weeks of arduous fighting, the enemy succeeded in delaying the advance on the Roer River. At Merode, he had achieved local success in holding the town and eliminating two companies that had entered it. On the other hand, he had lost Hamich, Heistern, and Langerwehe, the framework of his defenses before Düren. In losing them, moreover, he had suffered serious losses in personnel and materiel, and, in spite of his efforts, the line on December 1, roughly paralleled the course of the Roer, and the natural defenses of the terrain had been overrun. This weakening tactical situation, however, in no way diluted the enemy’s determination to hold what he had. The Wenau-Merode road was a very sensitive point; any effort on the part of the Division to move down the road was met by heavy and concentrated fire, although the penetration of the 3/26-IR (1-ID) north of the road met much lighter opposition. The Stutgerhof (a large farmhouse) east of Langerwehe was an equally troublesome point. A platoon from George Co, 18-IR, which assaulted the house was pinned down by intense artillery fire and surrounded by enemy troops; after extremely bitter fighting on the part of rescue parties, ten of the men were pulled out. Enemy artillery, likewise, was at its high-water mark. 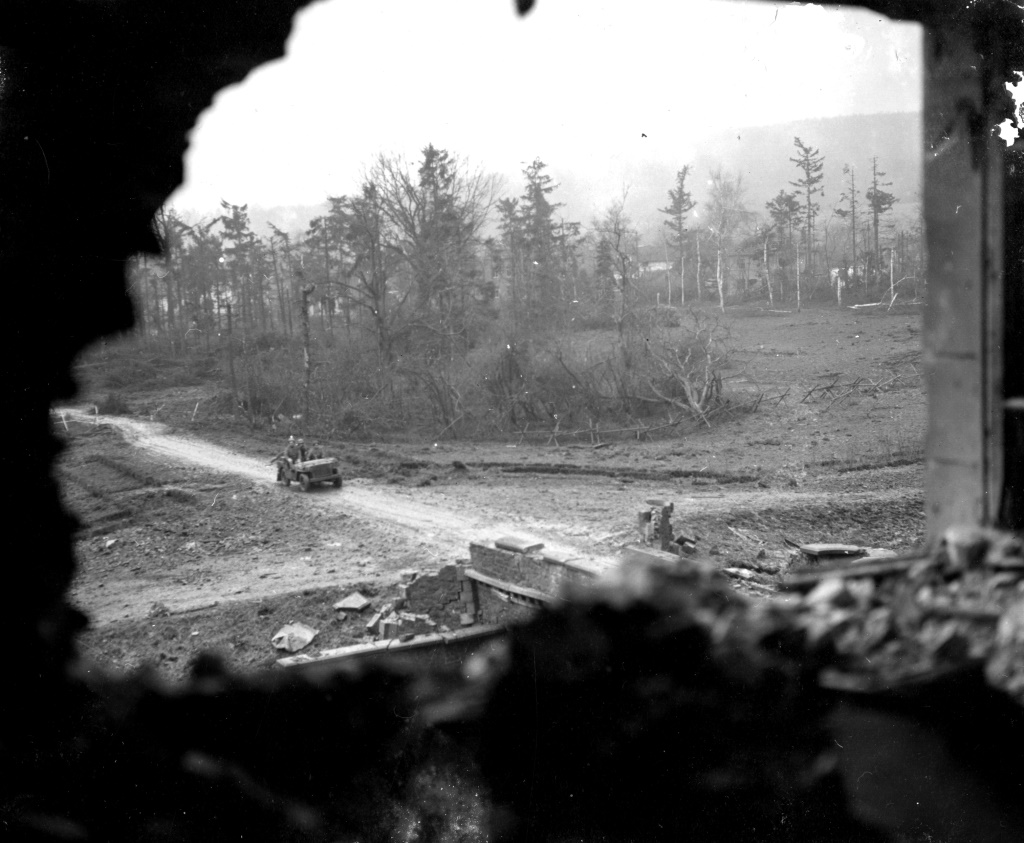 It was estimated that the enemy had available, besides the organic artillery of the 3.FJD, the remnants of the 12.VGD and the 47.VGD’s artillery, possibly that of the 3.PGD, as well as normal Corps and Army artillery. At the beginning of the period, it was believed that the 3.FJD alone opposed the 1-ID’s advance; the survivors of the 47.VGD with the 48.Regt and the 89.Regt (12.ID) had been pulled out. Of the 3.FJD, the 3.Bn of the 8.Regt was in position north of the Military Highway; the 2.Bn extended the line to the south, with outposts at the Stutgerhof, and the 1.Bn was in the line south of the Division’s sector. The 1.Bn and the 3.Bn of the 5.FJR, were believed to be in position east of Jungerhof and west of Merode, with the 2.Bn in local reserve east of Merode. The 9.FJR was probably in division reserve somewhere in the vicinity of Merken. Luchem was the next enemy’s strong point to be eliminated. It was reduced by a power play of infantry, tanks, TDs, and artillery. On the morning of December 3, Luchem was held by elements of the 2.Bn, 8.FJR, supported by a Plat. of the 14.Co, covering a roadblock on the Langerwehe-Luchem road. A large part of the 12.Co was in the town, although some of its mortars were about 600 yards to the northeast. Altogether, the enemy with fairly good reason considered himself secure from attack. 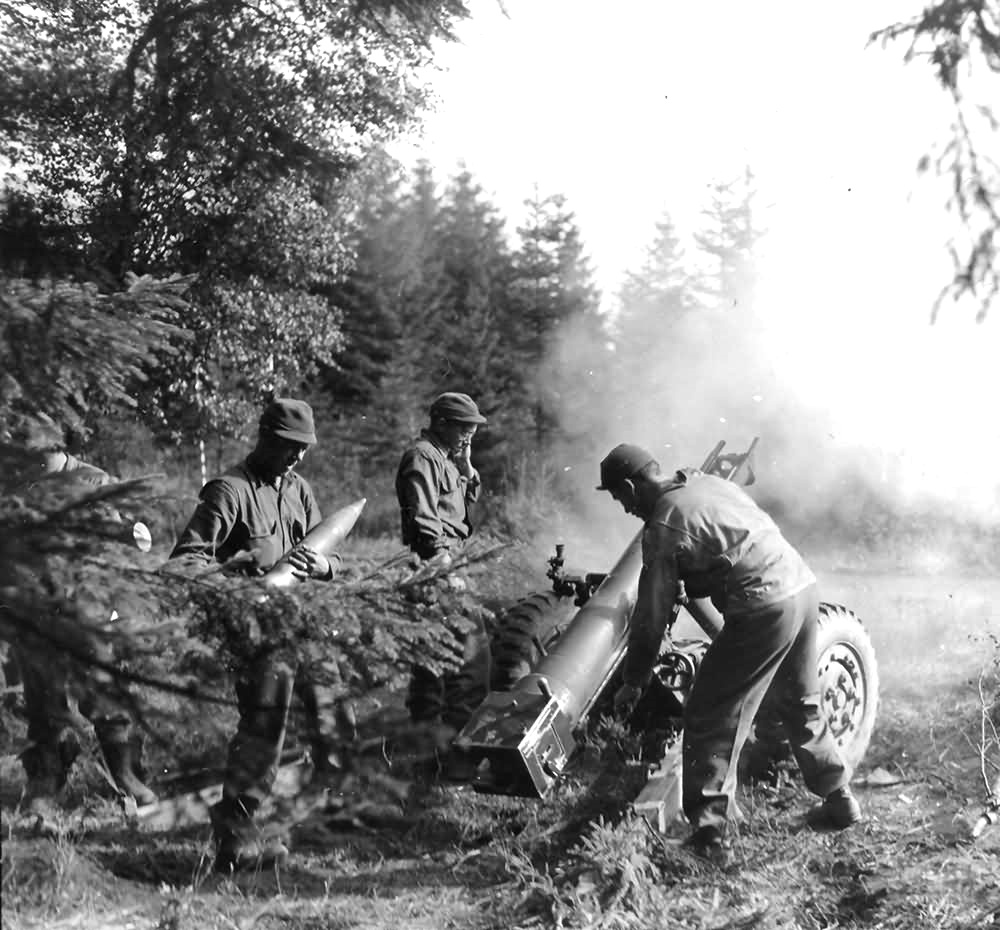 At 0600, December 3, the 1/16-IR, moved across the open ground between Langerwehe and Luchem and entered the western edge of the town. There was no artillery preparation and the enemy was taken completely by surprise. As the infantry advanced they liquidated the roadblock shutting off the Langerwehe road. At first light, tanks and TDs were moved into the attack, and with their arrival, our artillery boxed in the area to prevent the bringing up of reserves. Although the enemy stubbornly defended his positions at the main crossroads, the town was cleared in the afternoon. More than 150 prisoners were taken. The POWs said that the sudden appearance of our tanks had decided the question for them, further evidence that a few tanks may produce the German hopeless situation and consequent honorable surrender. During the attack on Luchem the enemy artillery, which might have been a weighty factor in the seizure of the town, was slow in taking up the fire, possibly because its forward observers had been bottled up by our deceptive attack. It was not until later in the day that the enemy laid heavy fire on the town, and by then it was too late. Several American soldiers were recaptured; they said that the parachutists, before surrendering, had burned all valuable papers and destroyed their weapons; it was obvious all during the Division’s contact with the 3.FJD that the paratroopers’ sense of security was far higher than that of the ordinary Landser. 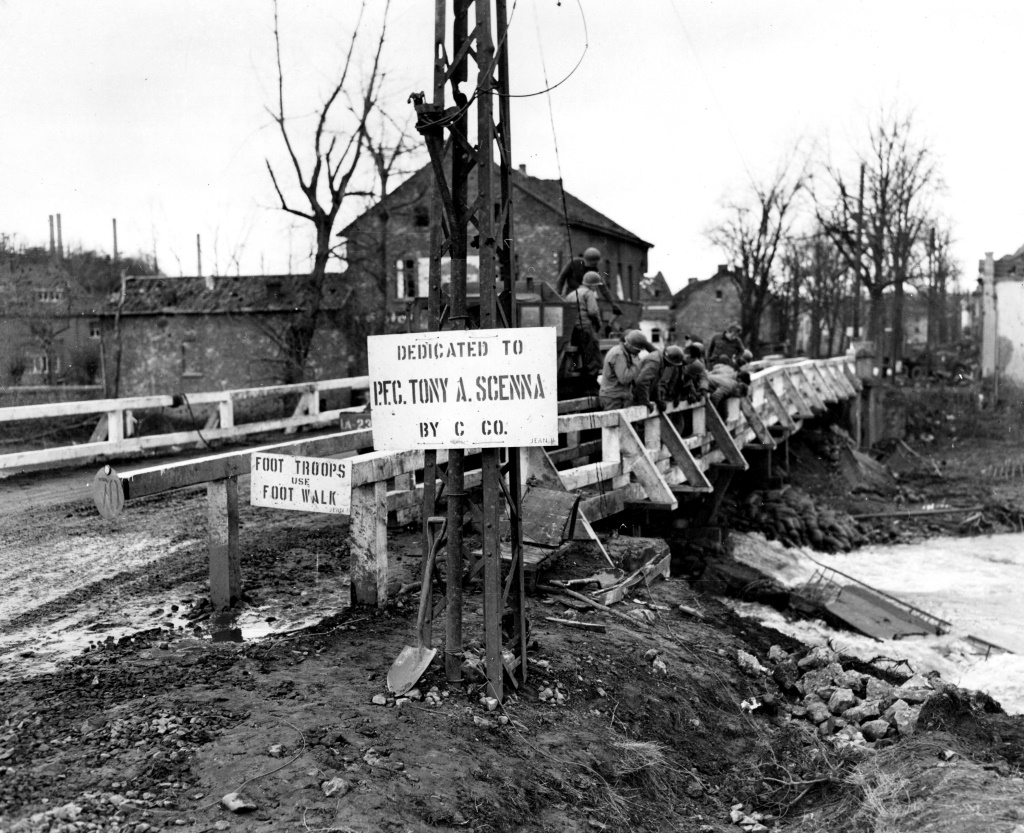 The enemy’s reaction to our seizure of Luchem started with recon patrols on the morning of December 4. Shortly before dark in the afternoon, a movement was observed in the area northwest of Echtz, and our artillery, preparing for a concentration, had just registered on the area when the first elements of the attack left the enemy positions and advanced on Luchem. In the subsequent disaster, only one PW was taken, and he believed himself to be one of the few survivors of his company, the 6.Co, which had been given the mission of retaking the town. The prisoner said that his battalion commander, a lieutenant who had been elevated from commanding the 5.Co the day before, had decided to take Luchem on his own initiative, spurred on by the desire for a Ritterkreuz (Knight Cross). 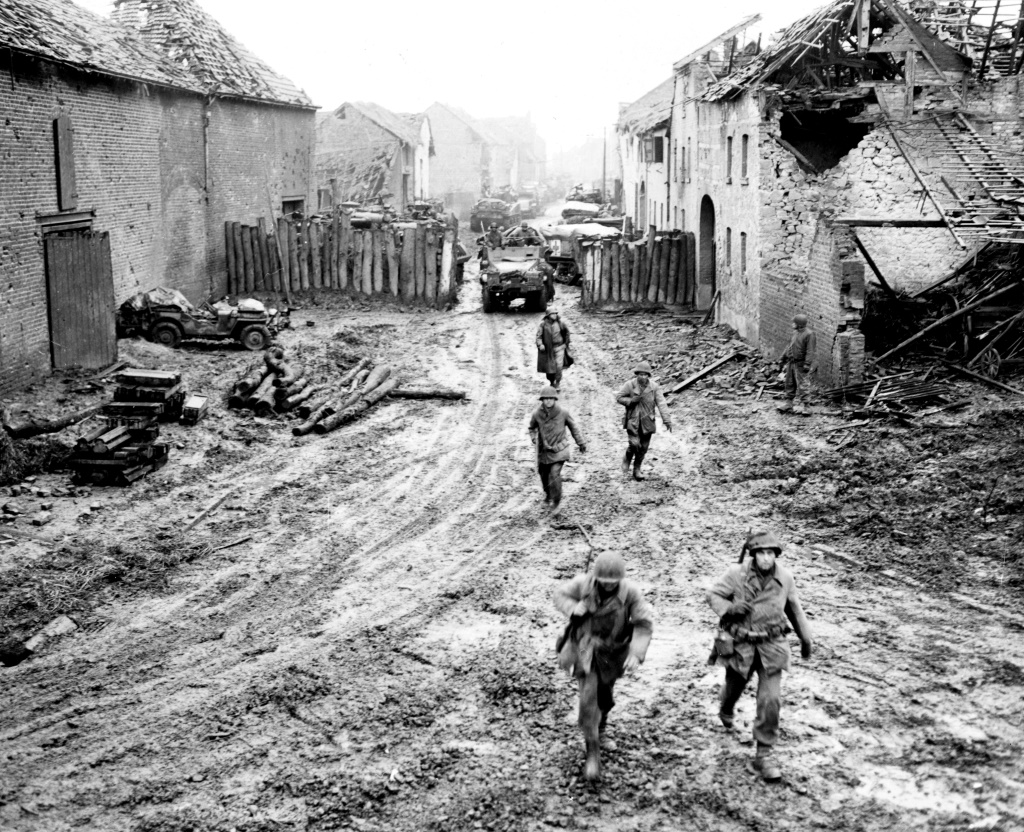 The 6.Co and one platoon of the 5.Co was ordered to assault the town, and after a short artillery and mortar barrage, the men started across the open fields in line of skirmishers. They were fairly in the middle when the four battalions of artillery caught them. Some of them managed to struggle to come to grips with the 16-IR, but the back of the attack had been broken. With the loss of Luchem, enemy activity went on the descent; artillery slackened off, and although large-scale movements were observed and attacked by our aircraft well behind the enemy lines, enemy activity in the forward areas was confined to a minor reshuffling of troops and positions. The enemy’s attention swung to the north, where he mounted an attack, supported by ten tanks, against Lucherberg, previously captured by the 104-ID. The attack was unsuccessful and did not spread to the Division area. This decline of activity continued, interrupted by patrolling on both sides, until December 7, when the 1-ID was relieved by the 9-ID. 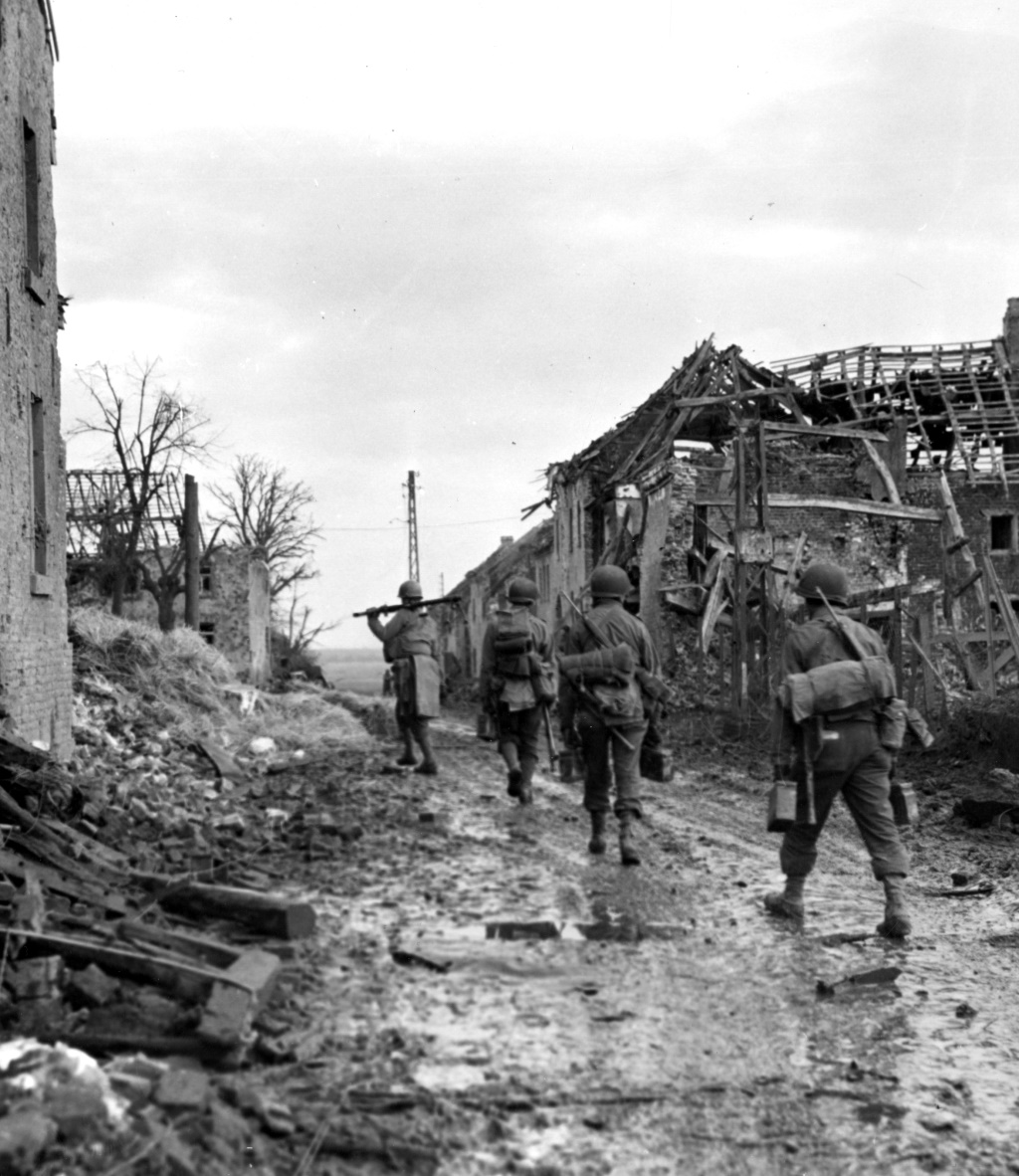 On the morning of December 16, the enemy, implementing a capability that had existed since the start of the Allied drive to the Rhine, launched a high-geared meticulously-planned counter-attack in the center of the American line between Monschau (Germany) and Echternacht (Luxembourg). The ultimate objectives of this drive are still not clear and it is probable that the operation was designed as a monumental spoiling attack cutting off the Allied supply Port of Antwerp and the communications center of Brussels. In any case, the German people and the Wehrmacht were promised Liège and the Meuse River, and in the POW cages during the early days, there was considerable high talk of Paris for Christmas. One of the primary objectives of the attack was the seizure of the enormous American supply dumps in the Liège, Verviers, and Eupen area (Soumagne); in fact, the continued impetus of the drive hinged on the capture of these supplies. Certainly, the thrust was for more than a local counter-pressure; if its success could not win the war for the enemy, at least it could delay the Allies’ winning for a depressing length of time. 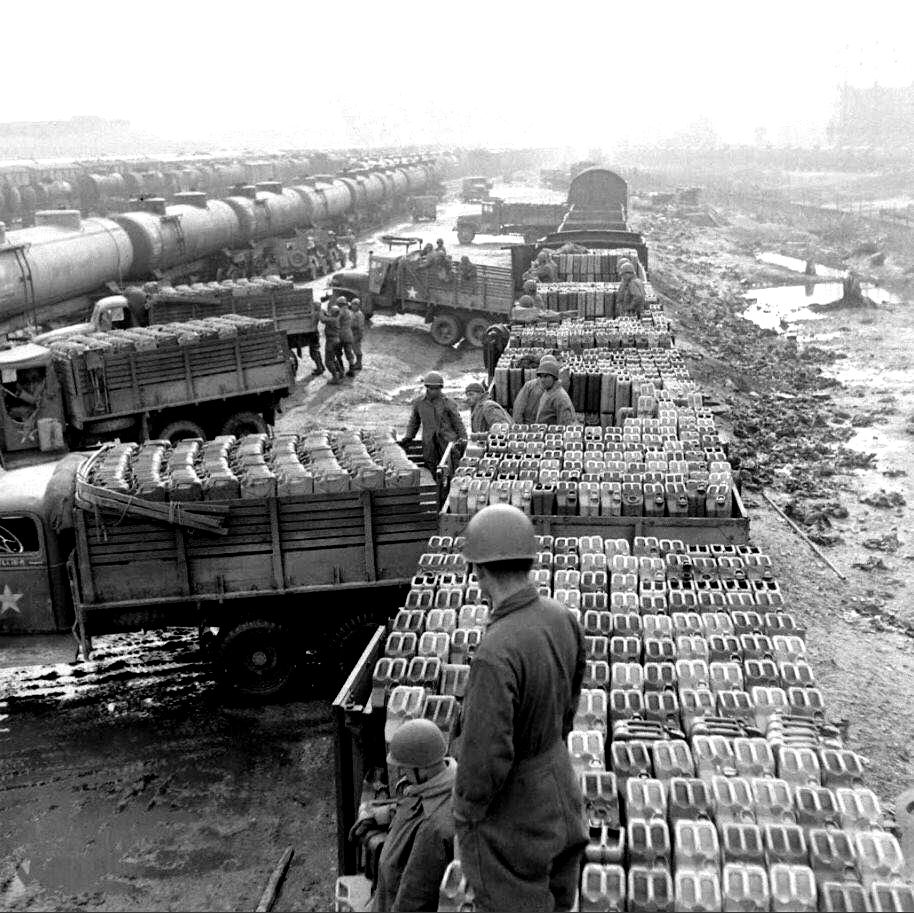 The enemy’s plan for the blow was carefully thought out and carefully disguised. (X) He picked the terrain an unlikely spot and therefore lightly held it. He waited for the weather, and for the first week, his operations were blanketed in baffling fog. He built up enough supplies to catapult the initial momentum. And he gathered up all his strategic reserves, including the 6.Panzer-Army, and drove them through in a gamble that was far from unreasonable. Furthermore, beyond the normal means at his command, he used every deception and surprise element he could conceive, labeling them collectively Operation Greif. The plan was simple enough once the necessary force had been assembled. Detailed intelligence reports and estimates kept track of the American situation in the avenue of the proposed attack, (X) and it was plain that the one imponderable in the German planning was the mobility of the American forces which could be made available to block the drive. Operation Greif had the mission of equalizing this factor.

Evidence of the enemy’s long-range planning and elaborate preparations for his drive to the west is obtained from four reels of newsreel and propaganda films captured by the 16-IR. The films were taken off a courier who had been dispatched from Koln to the leading elements of the 1.SS-PD (LSSAH) to pick them up. He was to return to Schleiden, the CP of the division, but was captured en route. Eventually, the films were to be sent to Berlin for development; instead, they have been forwarded to higher US Headquarters. With the film was the following descriptive note: Unit: 1.SS-PD (LSSAH). No. 85—88 Subject: We Attack. Light: Dark, rain. Develop and cut! s/Schaefer.

Reel Picture 230: (1—4): The first surprised POWs come in during the early hours. (6—8): Bridges demolished by the Americans are rapidly fixed by our engineers and we only stop for a few hours. (9—11): Only four shots were fired from this US 75-MM AT gun, after that our tanks took care of it. (13—19): New POWs stream back. (20—24): Pictures from a vacated American tent city in the Eifel. (25—30): New weapons and vehicles are captured, and plenty of dead are left by the surprised enemy.

Reel Picture 231: (1—3): Snapshots of the advance; Laughing drivers; Captured cigars are distributed. (4—8): Scenes of the march through the Eifel mud. (9—23): Pictures of the advance of the infantry. From our SPs, we have shot up many US tanks, scout cars, and supply vehicles.

(Danger G-2 Note: Many of the photographs captured in this haul later received prominent attention in the Allied press.) 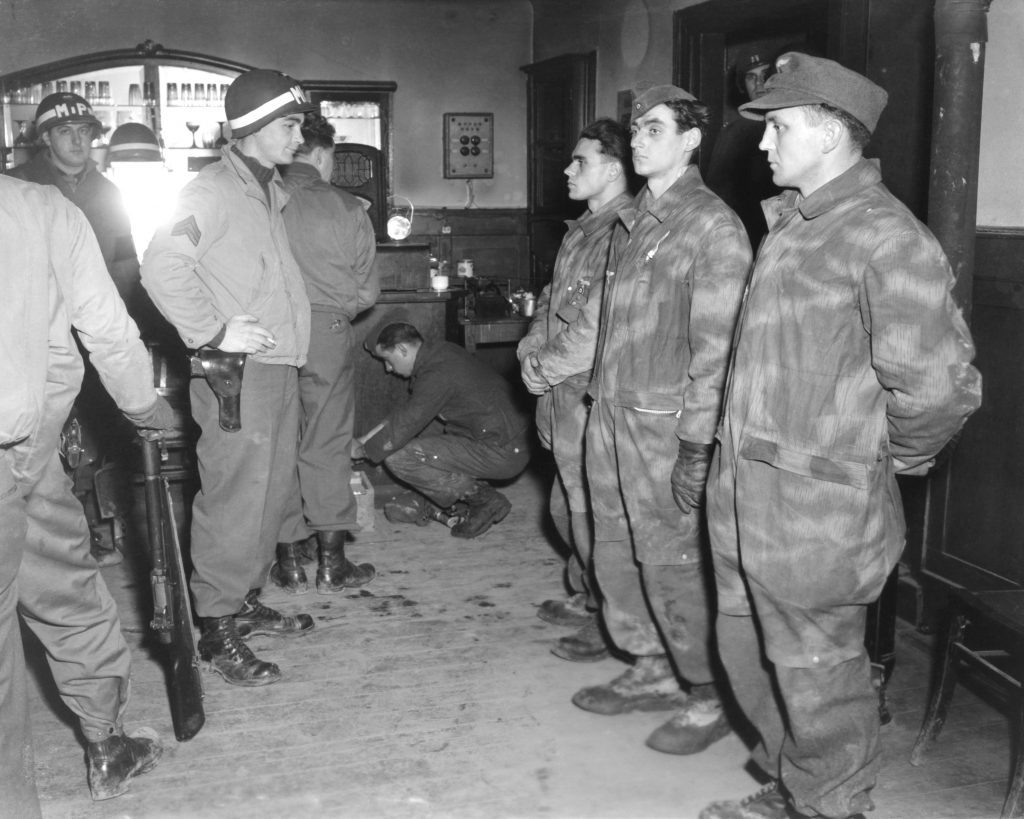 (Original German ‘Newsweek’ (Wochenschau) January 1945. Note I have worked several days to have it in this quality and you can even watch the film in full screen because of the quality. (Full original, no ads no craps) (It’s so good that it is even worth a small donation.) (Doc Snafu)

You Ask, We Answer - Why do bad things happen to good people? https://youtu.be/gcu36J-Y3Tg
#freetarot #intuitivereadings

The O'Jays - Don't Let Me Down

Johnny Eblen believes he’s ‘a style matchup disaster’ for Alex Pereira: ‘I beat him 10 times out of 10’ https://www.mmafighting.com/2023/2/7/23588452/johnny-eblen-believes-hes-a-style-matchup-disaster-for-alex-pereira-i-beat-him-10-times-out-of-10?utm_campaign=mmafighting&utm_content=chorus&utm_medium=social&utm_source=twitter

The easiest way to incorporate active recovery into your regimen: go for a walk every day.

I've been in the beautiful Swiss Mountains the last few days. Apart from being deep in nature, feeling the soft snow under my feet and the freshest air, the utter beauty of this place is so breathtaking and indescribable. I'm so grateful and feeling so alive ♥

Is looking for her #forever🏠

This gorgeous girl is 2 years old, & has been waiting at the shelter all that time 💔