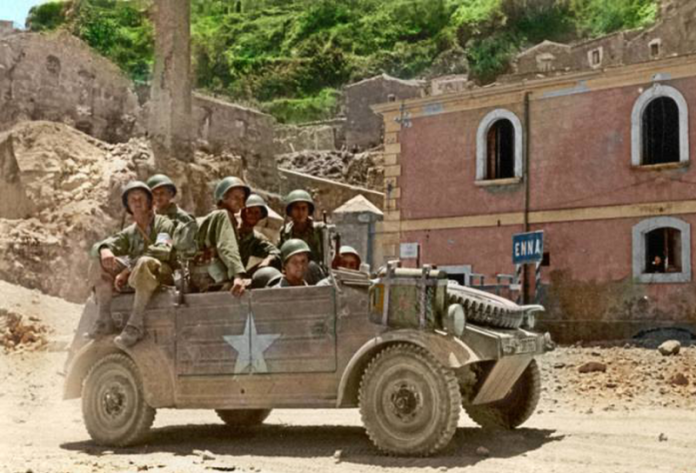 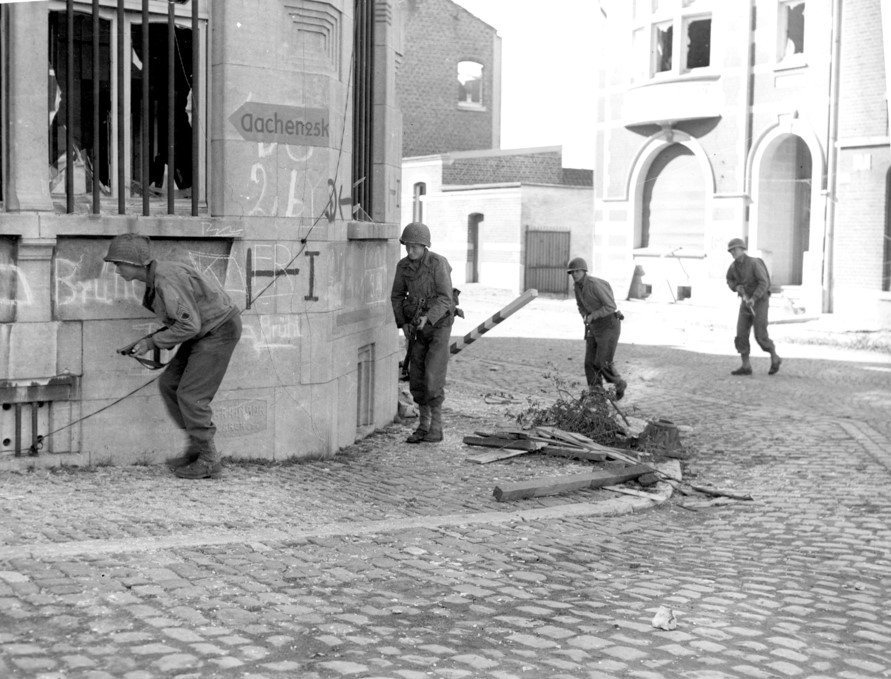 Message received on issuing of new protective ointment containers and all units informed.

CCA, US 3-AD was also alerted. At 2100, the 26-RCT was placed on a One-Hour Alert. Arrangements were made to have two truck companies (3807th QM Truck Co & 3711th QM Truck Co) report to a prearranged assembly point by 2400 to move the Combat Team to Elsenborn. At 1600, the 5-FAB reverted to Division control. It is sort of ironic that on the day the entire Division is assembled in a rest area, the Division is again alerted for immediate combat. Col Anding, V Corps G4, called stating the entire matter of trucks is being handled by Army and the companies are on Alert Status. Col Curtis called Col Eymer of the V Corps regarding Class I, III, and V supplies for the 26-IR in connection with this move. Col Eymer informed that trucks are to be held and not released until orders are received from the V Corps. Col Curtis called the S4 of the 26-IR inquiring as to the critical shortages. He stated the 26-IR was short 6 Bazookas, 24 BARs, 209 Grenade Launchers M-7, 8 Jeeps, 2-2 ½ ton trucks, and 3 Half-tracks are in the shop for repair. Called OD who reported he can furnish these weapons in the morning. He will have most of these shortages in the hands of the 26-IR tomorrow night. Capt Zera, CWS Officer, reported they have no excess equipment in the Division other than 11 flame throwers. Received Army Administrative Order No. 8.

The 1-ID is placed under the operational control of the V Corps upon arrival at the destination. It appears that the enemy attacks in the V Corps area are major efforts. Identification of elements of the 6.Panzer-Army has been made. This Army, which contained Panzer Divisions, has been in Army Reserve and heretofore believed bivouacked in the Cologne area. The fact that this Army has been committed confirms G-2 estimates that the present attacks may well develop into the deciding battles of this war.

The 16th Infantry Regiment recaptured a platoon of the 47th Field Hospital including 17 nurses, and some Corps Engineer troops that had been captured earlier in the day by elements of the 1.SS-Panzer-Division (LSSAH). (The First is the number One outfit of the 47th from now on in.). The 16th and 26th Combat Teams were in contact with enemy forces. There were five enemy attacks and several strong enemy patrol actions against Division positions. The Division maintained its positions. Twenty-five FW 109’s bombed and strafed the Division area. Enemy artillery, including Nebelwerfers, were active.

The 18-RCT continued to comb the rear areas for German Fallschirmjäger. The Big Picture looks a lot brighter. Army boundaries will be changed and many new Corps and Divisions are being moved into the battle area. The German penetrations on the north appear to have been checked by the US 1-ID, but the enemy is moving his penetration finger south and west. Captured German Fallschirmjäger (Skorzeny’s Panzer-Brigade 150) were clothed in American uniforms, including identification tags and underwear. They had American arms and were well supplied with American cigarettes and candy.

Col Curtis called the V Corps G4 informing him of the trouble units are having on the road, lost and not knowing where they are to go or why. These units are causing traffic jams and tie-ups on the main road between here and Eupen. He requested that Corps coordinate with the Division MP’s about control and to notify this office when units are on the move. Corps G4 stated he will have Corps MP’s check these units and try to straighten matters out.

The German penetration on the northern flank, the 1-ID sector, has definitely been stopped. Division forward troops are occupying defensive positions on high ground. Minefields have been laid and all positions booby-trapped and well wired. Elements of the 12.SS-Panzer-Division and 3.Fallschirmjaeger-Division attempted three probing attacks along the division front. All attacks were successfully repulsed and at least ten enemy tanks were knocked out. The 18-RCT completed the sweep of the rear wooded areas and captured five and killed an additional three Fallschirmjäger. Twenty-three Americans were recaptured by the Fallschirmjäger during this operation. The 1-ID continued to consolidate and hold positions without loss of ground. The US 2-ID is on our left (north) flank, and the US 30-ID remains on the right (south) flank.

The Division received the strongest and largest scale attack yet launched by the enemy since our arrival in this area. This attack was made in the 26-RCT sector and was preceded by intense artillery fire. Slight penetration was made by 5 tanks and infantry but the attack was repulsed and positions regained. The tanks were later destroyed in the Division’s rear area and the enemy was eliminated. One prisoner taken in this engagement, for the purpose of interrogation, reported that the Germans expected to make a deep penetration in the 1-ID sector, ridiculous!

It appears that the enemy’s intentions were to penetrate the US 1-A lines, capture sufficient gasoline to operate his Panzer Division, and capture the cities of Aachen – Eupen – Malmedy – Verviers, and Liège with the Meuse River as his western flank, then Antwerp. The 1.SS-Panzer-Division was the spearheading Division which broke through and over ran the US 2-ID and the US 99-ID and turned south. The 12.SS-Panzer-Division followed the same route and turned north where it was stopped cold by the 1-ID. The 3.Fallschirmjaeger-Division followed closely behind the Panzer Division and it, too, was stopped abruptly in the first zone of action. 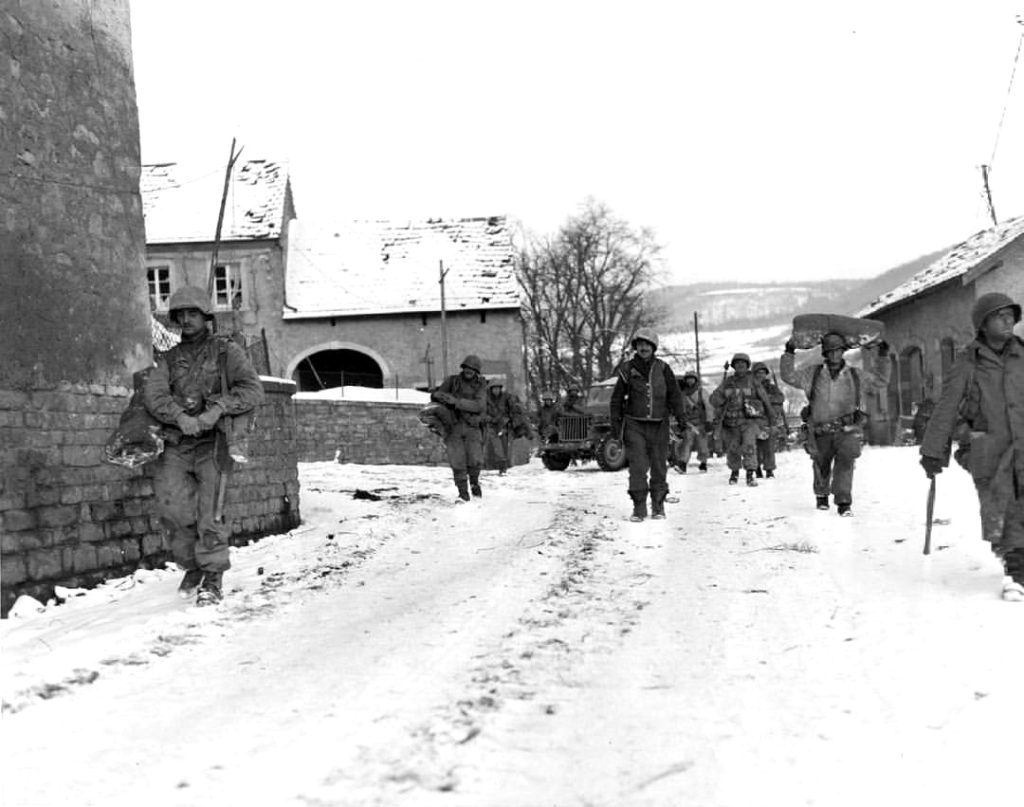 #LoveIsland fans in hysterics over Ron’s furious reaction to Kai coupling up with Samie
https://www.ok.co.uk/tv/love-island-ron-furious-reaction-29112122

Indeed. A descriptive quality all of its own. Adjective, noun and verb.

Love this in today’s Times.

@cluelesspegg @WeHaveWaysPod I had a similar thought, but about the Wehrmacht soldiers who surrendered at Stalingrad. Be interesting to know more of their stories.

With disguised dead-letter drops, secret underground bunkers, and ruthless civilian volunteers, Britain's Secret Defences is "essential reading for anyone interested in Sealion or in the history of special operations forces" (The NYMAS Review) 🤫

Justin Bieber, Teenage Superstar
Like several artists, Justin was discovered on Youtube from videos uploaded by his mother as she strove to reveal her "shining star." #JustinBieber #Superstar #YoutubeDiscovery #Usher
https://www.eamtradio.com/newsletter/justin-bieber-teenage-superstar