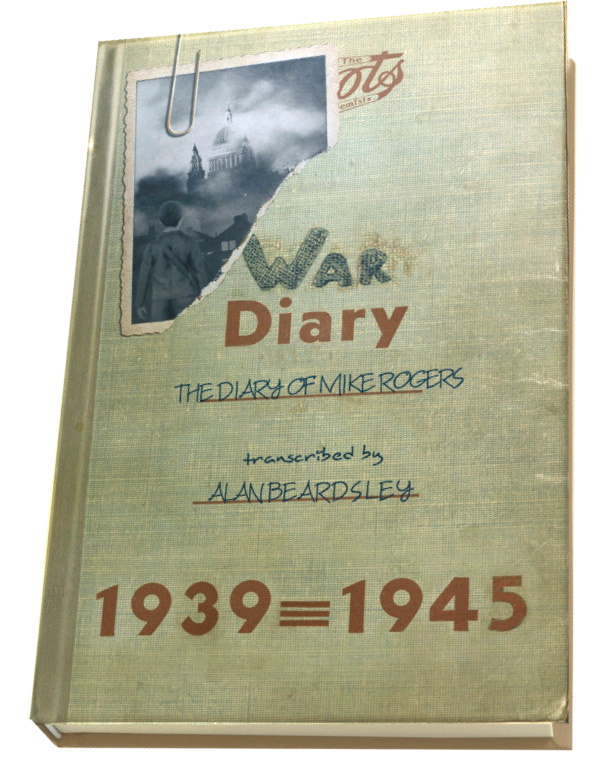 Discovered in 2020 after spending the last 75 years in an attic, War Diary, The Diary of Mike Rogers has the power to become a world classic – a powerful reminder of the horrors of war and an eloquent testament to the human spirit.

In 1939, with Great Britain on the brink of War, Mike Rogers details the daily, and often mundane experiences of a thirteen-year-old British boy and his family. For the next six years, until the end of World War 2, Mike Rogers and his family tried to maintain daily life. With many items restricted, and daily activities curbed, read as Mike Rogers recounts the various military activities across Europe, Africa, and the Far East; the cinematic delights; the changing British climate, and the constant cruelties of living in an area of London attacked by various flying-craft.

In his factually rich diary, Mike Rogers records vivid impressions of his experiences during the wartime period. Thoughtful, moving, and often amusing, Mike Rogers’ account offers a fascinating commentary on human courage, and the strength of purpose, and provides compelling details of many pivotal and historical moments of a bygone age.

A truly remarkable book The New York Times, I’d like to think would say.
One of the most moving personal documents to come out of World War II The Philadelphia Inquirer may have said if they could read the book.
There may be no better way to commemorate the seventy-sixth anniversary of the end of World War II than to read War Diary: The Diary of Mike Rogers, a testament to an indestructible nobility of spirit in the face of pure evil Chicago Tribune, could have said if they’d bought a copy.
The single most compelling personal account of WW2 … remains astonishing and excruciating The New York Times Book Review, may say if they had the chance.

Nicholas Winton helped 669 Jewish children escape the Nazis. His efforts went unrecognized for 50 years. Then in 1988, while sitting as a member of a TV audience, he suddenly found himself surrounded by the kids he’d rescued, now adults.

How to Use Personal Brand Photos to Stand Out on Social Media (and Be Remembered) https://ift.tt/Fr7Ky2H

"There is on television & in most places online, a near total media blackout of this story. How powerful is Big Pharma? That powerful."

Tucker Carlson on the Pfizer expose by Project Veritas.

We're sure many parents can relate! 💤💤

Astronomer Have Discovered A Mysterious Object, Which Is 570 Billion Times Brighter Than The Sun

Consistently investigate what gives other people energy. Be the fan that fuels it. - Darren Rowse #quote

Just because you can do something doesn’t mean you should.

Due process has been followed- the march is legal. You can exercise your right not to March and that is perfectly fine.

@OohLaLovely Hence we have a constitutional democracy ... when ppl exercise their rights 2 march must & should as well respect others ppl's rights ... who prefers not to do so furthermore when ppl march must do so as per due processes & procedures ... We can't afford as a country riots ‼️‼️‼️

Today, on Holocaust Memorial Day, I'm thinking about this little boy, the same age as my kids, proudly showing a flower to another child, outside a gas chamber at Auschwitz, where they were all murdered moments later. It is so important for us all to remember what happened.