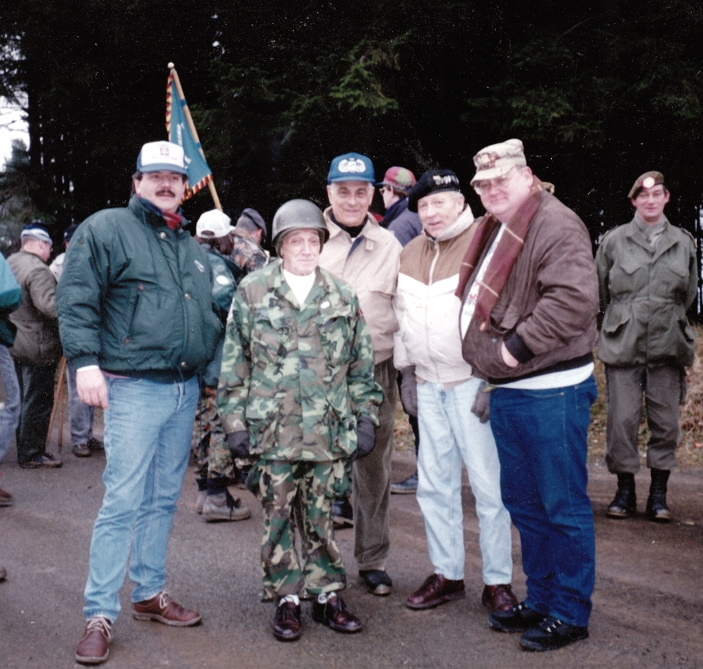 I have worked several months to research, find and compile this huge archive then publish it in a way that it becomes readable without too much trouble. The relevant sources are so diversified that it was not an easy task. Being patient like I am and without getting help from anyone (as usual) – many want to join but no one ever found the departure line – I could have used files from well-known historians available online. After reading many of these files I found out that it was not possible to read these archives because of the like the wartime newspaper publication or because of the historical mistakes in their contents. Of course, I am not ‘the’ expert in this part of World War Two nor do I have the needed financial support to buy all the archives available on this particular subject, but be sure that I have – even if I run alone a real non-profit small organization – encoded all the relevant information I could find. Another thing to say is to alert the readers that my initial language is French, German, and some Dutch. All I know in English is the American slang I have learned during the years I walked American World War Two returning veteran groups with my spiritual father in Military History, Charles B. MacDonald.

In the early days of the Nationalsozialistische Deutsche Arbeiterpartei (NSDAP), the leadership realized that a bodyguard unit composed of reliable men was needed. Ernst Julius Günther Röhm (Nov 28, 1887 – July 1, 1934), a German military officer, a founding member of the NSDAP, a close friend, and an early ally of Adolf Hitler formed a guard formation from the 19.Granatwerfer-Kompanie. This formation evolved rapidly and became the Sturmabteilung (SA). 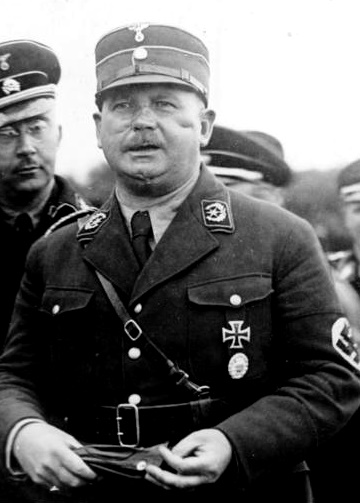 In 1923, Hitler ordered the creation of a small separate bodyguard dedicated to his service rather than a suspect mass of the party, such as the SA. Originally the unit was composed of a handful of trusty men like Rudolf Hess, Joseph Berchtold, Emil Maurice, Erhard Heiden, Ulrich Graf, Bruno Gesche, Sepp Dietrich, Christian Webber, Karl Fiehler, Walter Buch and Hermann Fobke commanded by Julius Schreck and Joseph Berchtold. This group was designated the Stabswache (Staff Guard). The unit was issued unique badges, Schreck resurrected the use of the Totenkopf (Skull) as the unit’s insignia, a symbol various elite forces had used in the past, including specialized assault troops of Imperial Germany in World War I who used Hutier infiltration tactics, but at this point, the Staff Guard was still under the control of the SA.

Later that year, the unit was renamed Stosstrupp Hitler (Shock Troop) and placed under the command of Julius Schreck. The unit never numbered more than 20 members. On Nov 9, 1923, the Stosstrupp, along with the SA and other NSDAP paramilitary units, took part in the abortive Beer Hall Putsch in Munich. In the aftermath of the putsch, Hitler was imprisoned and the NSDAP and all associated formations, including the Stosstrupp, were officially disbanded.
During this period, the mid-1920s, violence remained a large part of Bavaria politics and Hitler became quickly a potential target. In 1925, he ordered the formation of a new bodyguard unit, the Schutzkommando (Protection Command). The unit was renamed the Sturmstaffel (Assault Squadron) and in November was renamed the Schutzstaffel, abbreviated to SS.

In 1933, the SS had grown from a small bodyguard unit to a formation of over 50.000 men. The decision was made to form a new bodyguard unit, again called the Stabswache, which was mostly made up of men from the 1.SS-Standarte. In 1933 this unit was placed under the command of Josef ‘Sepp’ Dietrich who selected 117 men to form the SS-Stabswache-Berlin on March 17 and this unit replaced the army guards at the Reich Chancellery. Eleven men from the first company of 117 went on to win the Knights Cross, and forty of them were awarded the German Cross in gold for bravery. 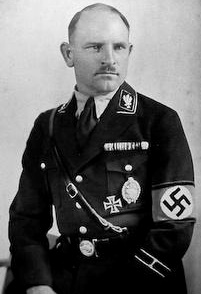 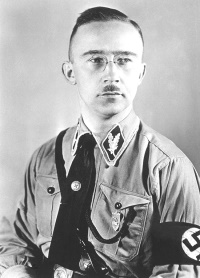 On April 13 1934, Reichsführer-SS Heinrich Himmler ordered the Leibstandarte Adolf Hitler (LAH) to be renamed Leibstandarte SS Adolf Hitler (LSSAH). Himmler inserted the SS initials into the name to make it clear that the unit was independent of the SA or the regular army. The LSSAH was considered a National Socialist unit, which eventually grew into an elite Panzer Division of the Waffen-SS. Although nominally under Himmler, Dietrich was the real commander and handled the day-to-day administration. Later, in 1934, Stabschef-SA Ernst Röhm continued to push for greater political influence for his already powerful SA. Hitler decided that the SA had to be eliminated as an independent political force and ordered the LSSAH to prepare for the action. 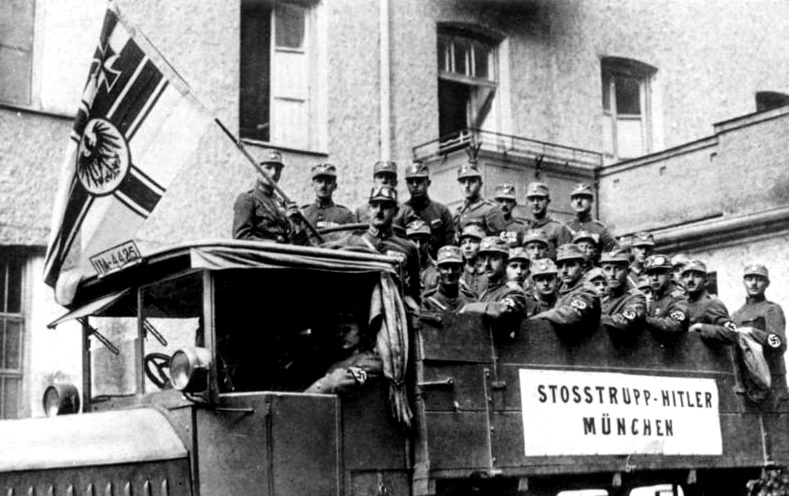 The LSSAH formed two companies under the control of Jürgen Wagner and Otto Reich, these formations were moved to Munchen on Jun 30. Hitler ordered all SA leaders to attend a meeting at the Hanselbauer Hotel in Bad Wiessee, near Munchen. Hitler along with Sepp Dietrich and a unit from the Leibstandarte traveled to Bad Wiessee to personally oversee Röhm’s arrest on Jun 30. Later, at about 1700, Dietrich received orders from Hitler for the Leibstandarte to form an execution squad and go to the Stadelheim prison where certain SA leaders were being held.

On Jul 1, Hitler finally agreed with Göring and Himmler that Röhm should be executed. In what the Nazis called the Röhm Putsch, but otherwise came to be known as the Night of the Long Knives, companies of the LSSAH, together with the Gestapo and Göring’s Landespolizeigruppe, performed Death Squad actions.
At least 85, but most likely no less than twice that number of people, were executed without trial over the next few days. 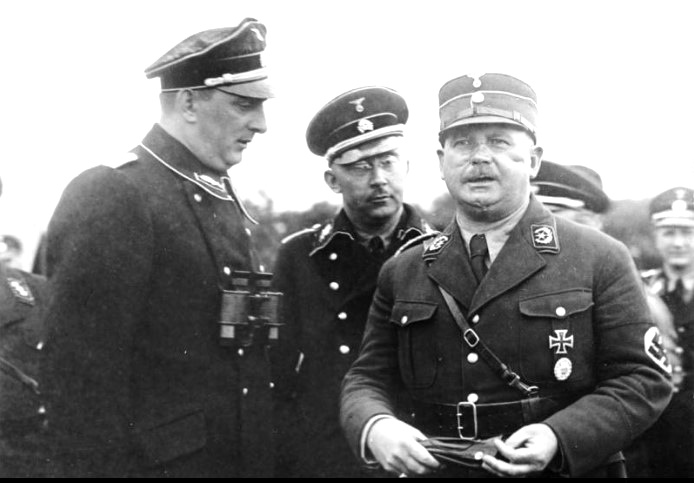 This action succeeded in effectively decapitating the SA and removing Röhm’s threat to Hitler’s leadership. In recognition of their actions, both the LSSAH and the Landespolizeigruppe General Göring were expanded to regimental size and motorized. In addition, the SS became an independent organization, no longer part of the SA. Thereafter, as the SS swelled with new recruits, the strict recruitment regulations for the LSSAH meant that only those deemed sufficiently Aryan as well as being physically fit would be admitted. The LSSAH provided the honor guard at many of the Nuremberg Rallies, and in 1935 took part in the reoccupation of the Saarland. On Jun 6, 1935, the LSSAH officially adopted a field-grey uniform to identify itself more with the army which wore a similar uniform.
The LSSAH was later in the vanguard of the march into Austria as part of the Anschluss, and in 1938 the unit took part in the occupation of the Sudetenland. By 1939, the LSSAH was a full infantry regiment with three infantry battalions, an artillery battalion, and anti-tank, reconnaissance, and engineer sub-units. Soon after its involvement in the annexation of Bohemia and Moravia, the LSSAH was redesignated Infanterie-Regiment Leibstandarte SS Adolf Hitler (motorized). When Hitler ordered the formation of an SS division in mid-1939, the Leibstandarte was designated to form its own unit, unlike the other Standarten of the SS-Verfügungstruppe (SS-VT), SS-Standarte Deutschland, SS-Standarte Germania, and SS-Standarte Der Führer.
The Polish crisis in 1939, put these plans on hold, and the LSSAH was ordered to join the XIII.Army-Korps (Army Group South), which was preparing for the attack on Poland. 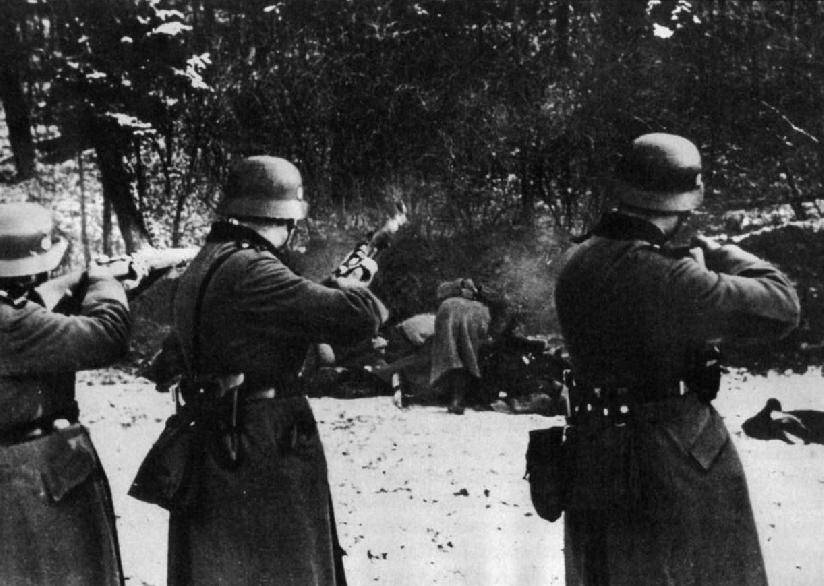 September 1939
SS-Obermusikmeister Hermann Müller-John ordered 50 civilians, several were Jews, shot at Błonie, Poland in Sept 1939. Gen Joachim Lemelsen, commander of 29.Infantry-Division (motorized) reports of these murders to his superiors and Gen Walter von Reichenau, commander of 10.Army orders the arrest of Müller-John. A few days later Adolf Hitler places the SS troops under separate SS jurisdiction at the request of Heinrich Himmler and the investigation into the killings was dropped.

September 1939
34 civilians were killed in Torzeniec by soldiers from the Pionier-Zug under command of SS-Obersturmführer Christian Hansen.

September 1939
Soldiers from LSSAH killed several civilians in Boleslawiec in the early days of the invasion of Poland and numerous such atrocities happened where soldiers from the unit advanced. 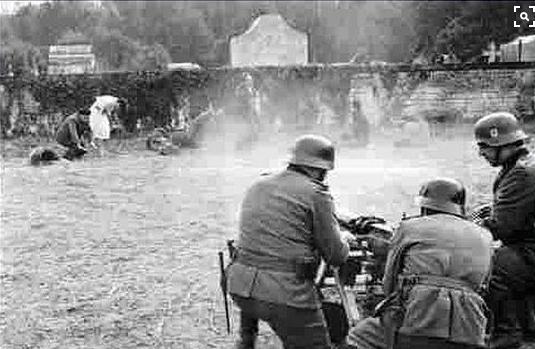 September 1939
Soldiers from 95.Infantry-Regiment (17.Infantry-Division) and Leibstandarte killed close to 200 civilians in Zloczew, the reason for this massacre is not known. It was investigated post-war by both Poland and West German authorities but no clear motive was found. Gen Herbert Loch, commander of 17.Infantry-Division that operated closely with LSSAH during the invasion of Poland complained about the LSSAH and their wild firing and tendency to reflexively set villages alight as they passed through them.

May 1940
On May 28, 1940, 80 British POWs from the 48th Division were killed at Wormhout by soldiers from the 2.Battalion commanded by SS-Hauptsturmführer Wilhelm Mohnke.

March 1942
Six soldiers of the LSSAH were captured by Soviet troops in Taganrog in October 1941, then tortured and murdered. After the bodies were located in March 1942 an order was issued that all Soviet soldiers captured during the following three days be shot, an estimated 4000 were killed. 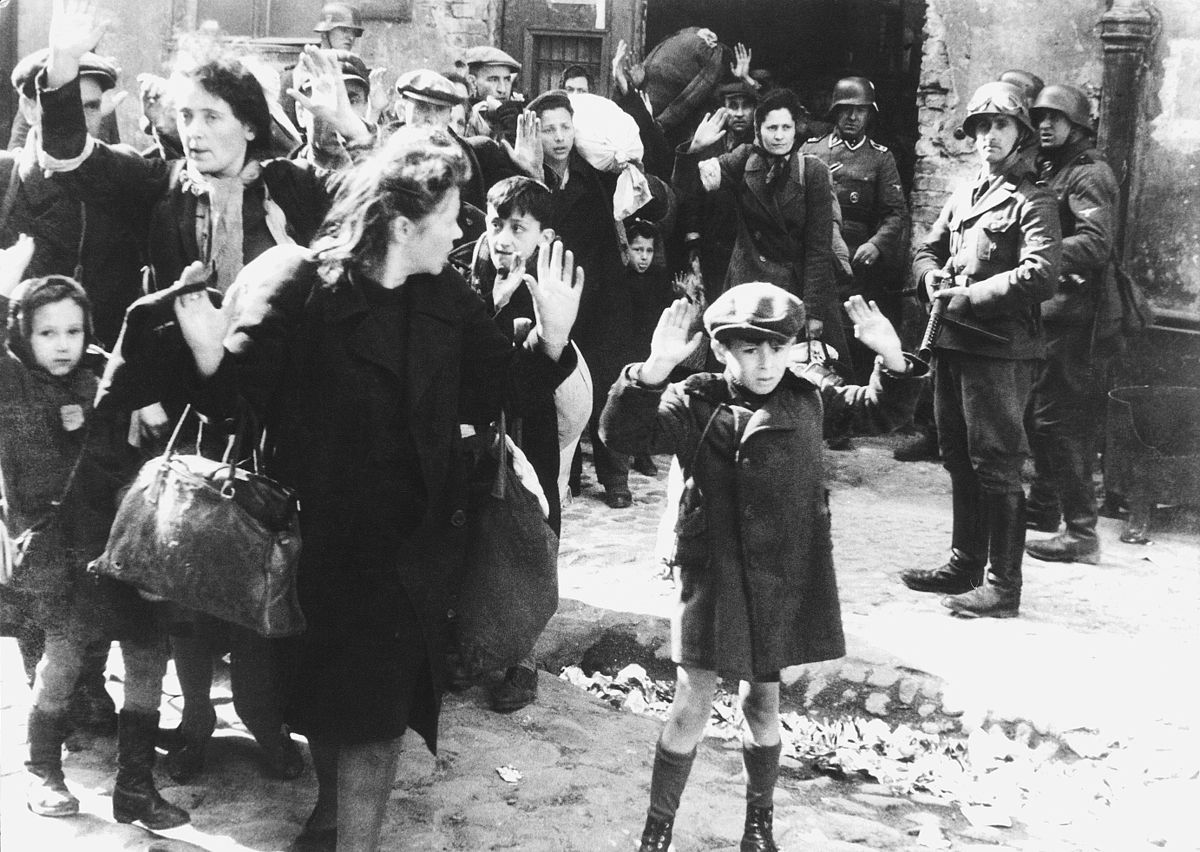 November 1942
Vehicles from LSSAH (most likely from SS-Wach-Bataillon 1) were used in the rounding up of Jewish factory workers in Berlin during November 1942.

March 1943
During the recapture of Kharkov in March 1943, the LSSAH is accused of killing some 700 wounded Soviet soldiers in the 1st Army Marshalling Hospital but it should be noted that it is unclear if this massacre is more than just an allegation.

September 1943
Soldiers of LSSAH were involved in the killing of 22 Italian Jews in the area of Lago Maggiore in September 1943. Five soldiers were put on trial for these crimes post-war.

September 1943
On September 19, 1943, the Italian town of Boves was shelled by troops commanded by Joachim Peiper, and 34 civilians killed in retaliation for the capture of two Waffen-SS officers. 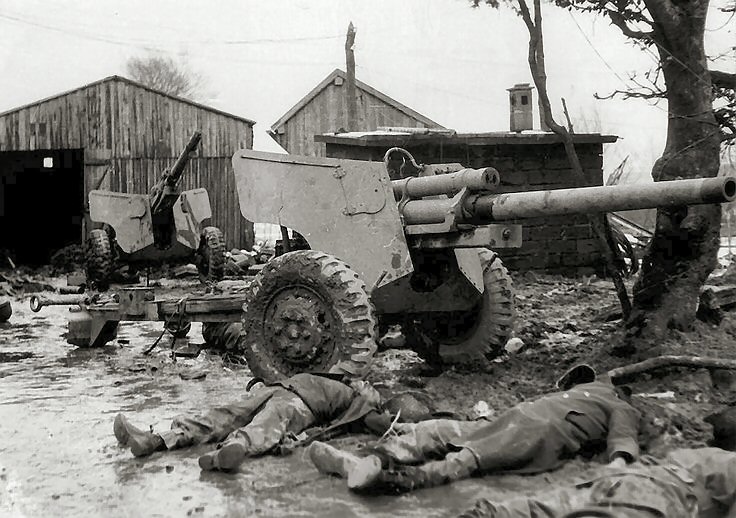 March 1945
A soldier of LSSAH was sentenced to five years in prison post-war for the shooting of two escaped Soviet POWs near Oberlind, Germany, March 1945.

The following is the order of battle per specific crime location, omitting atrocity generalization, such as convictions of ranking commanders for overall responsibility. Peiper is also excluded, inasmuch as another section of this study deals with him. 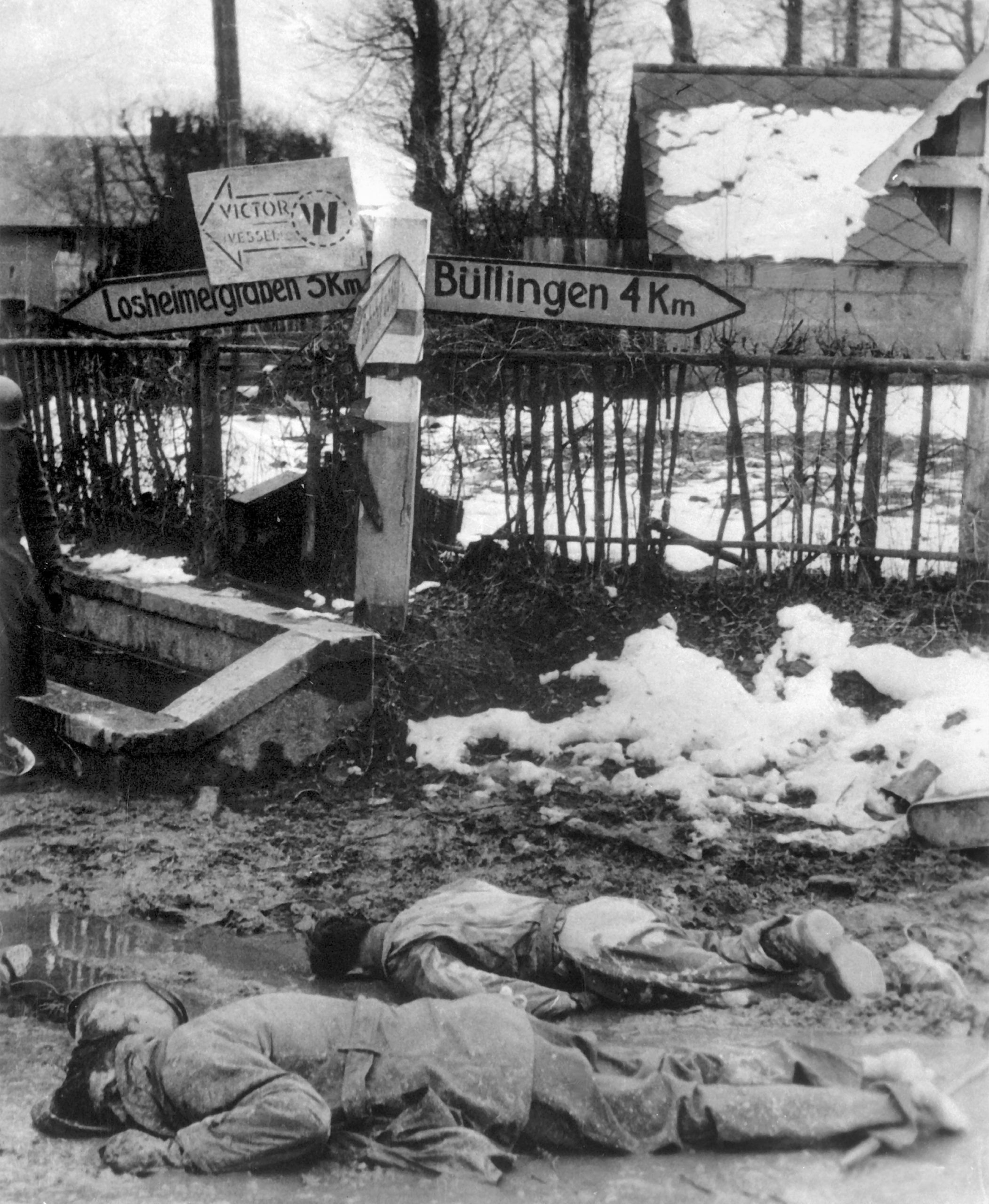 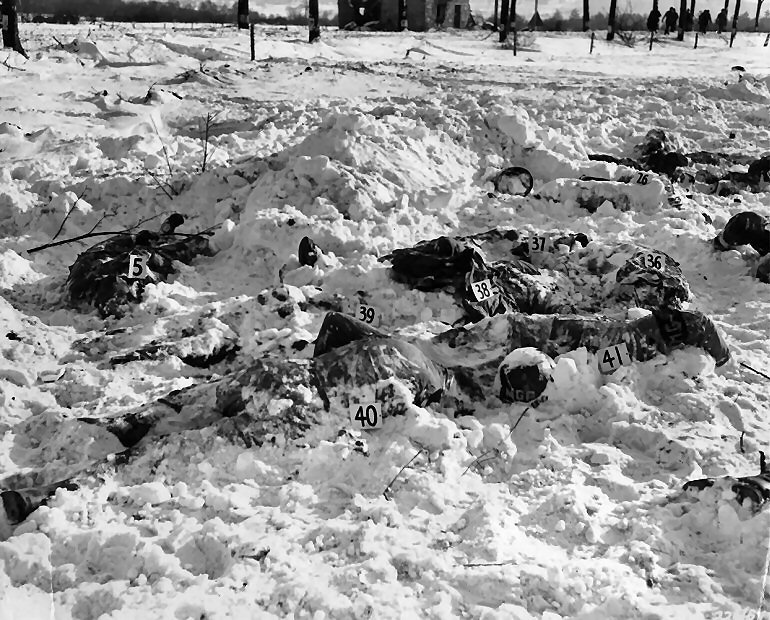 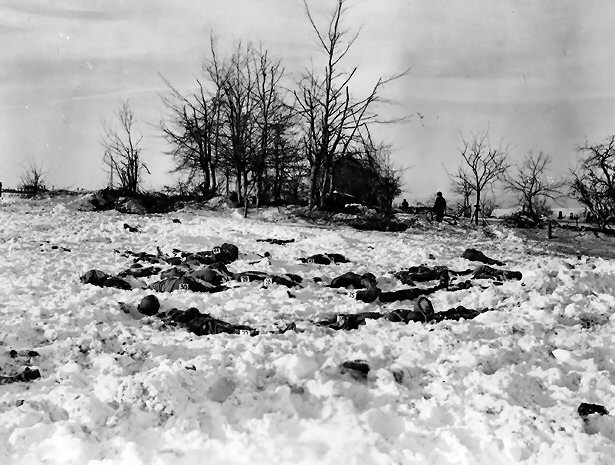