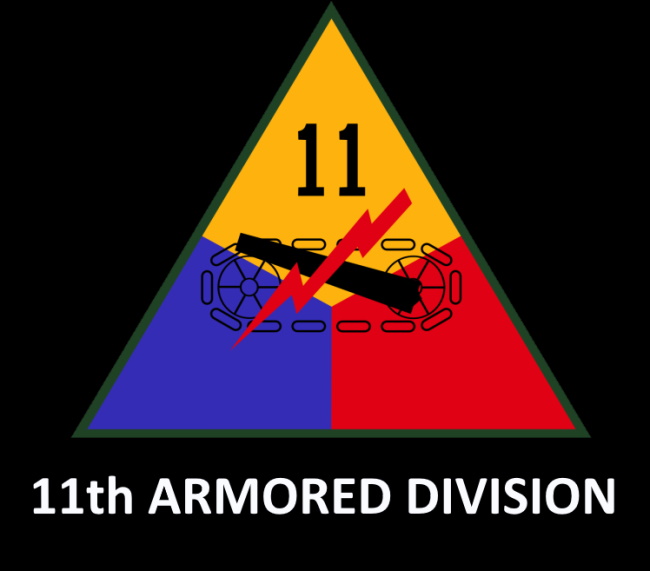 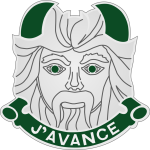 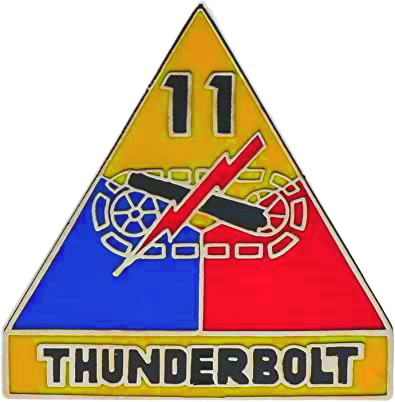 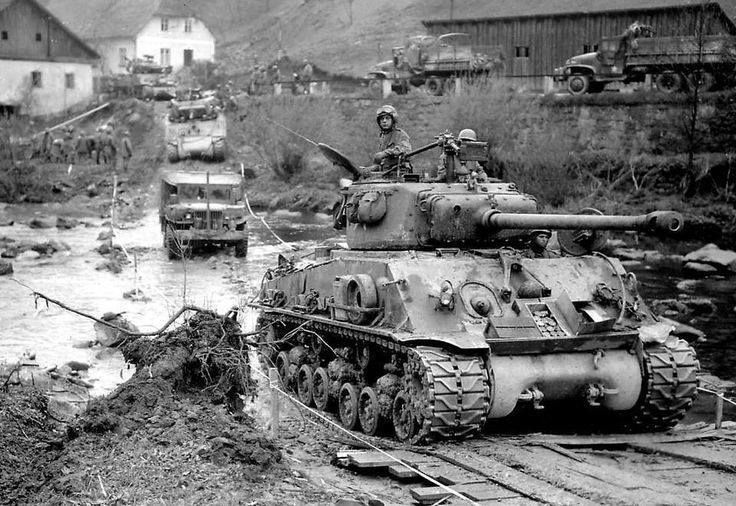 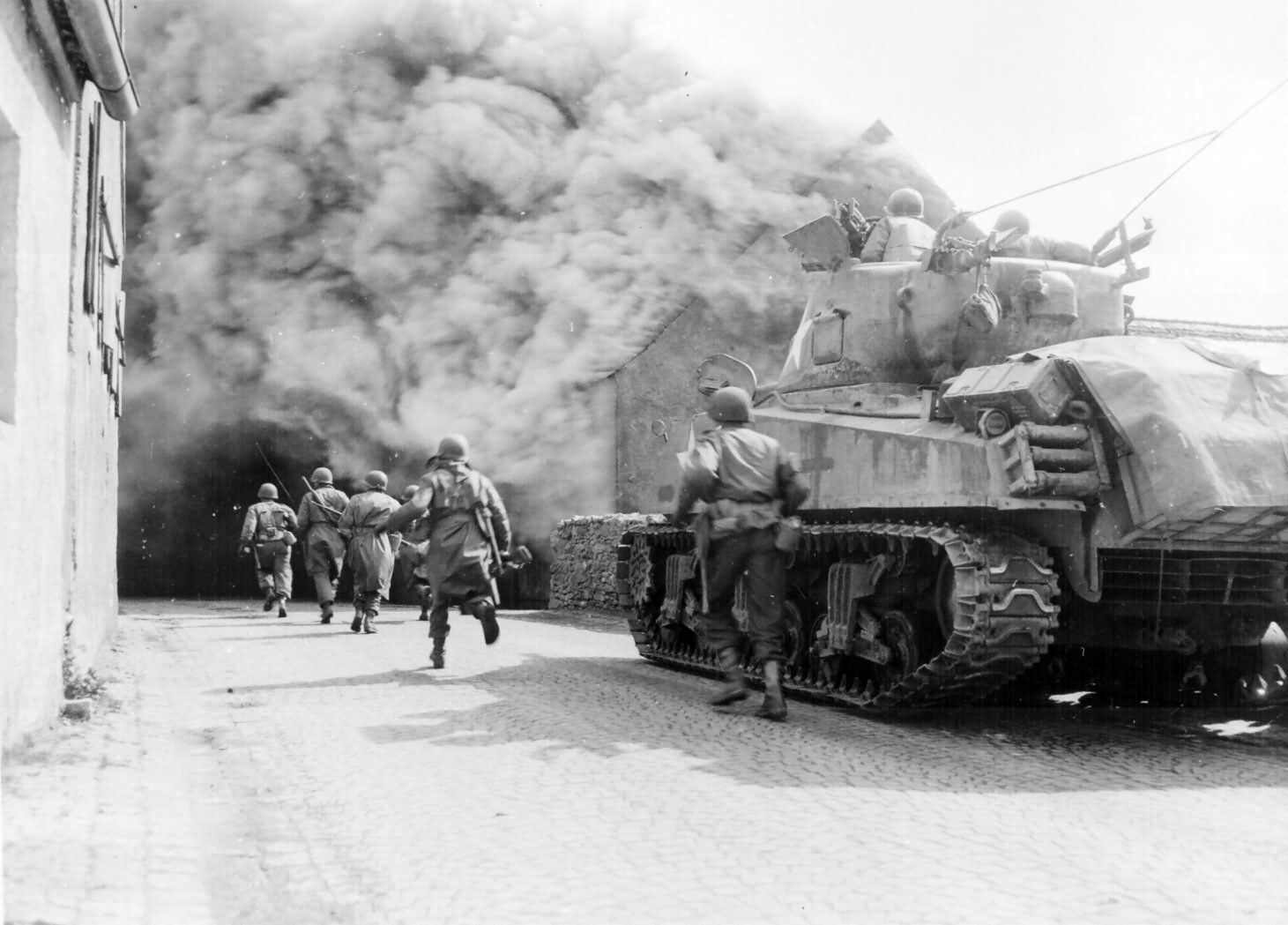 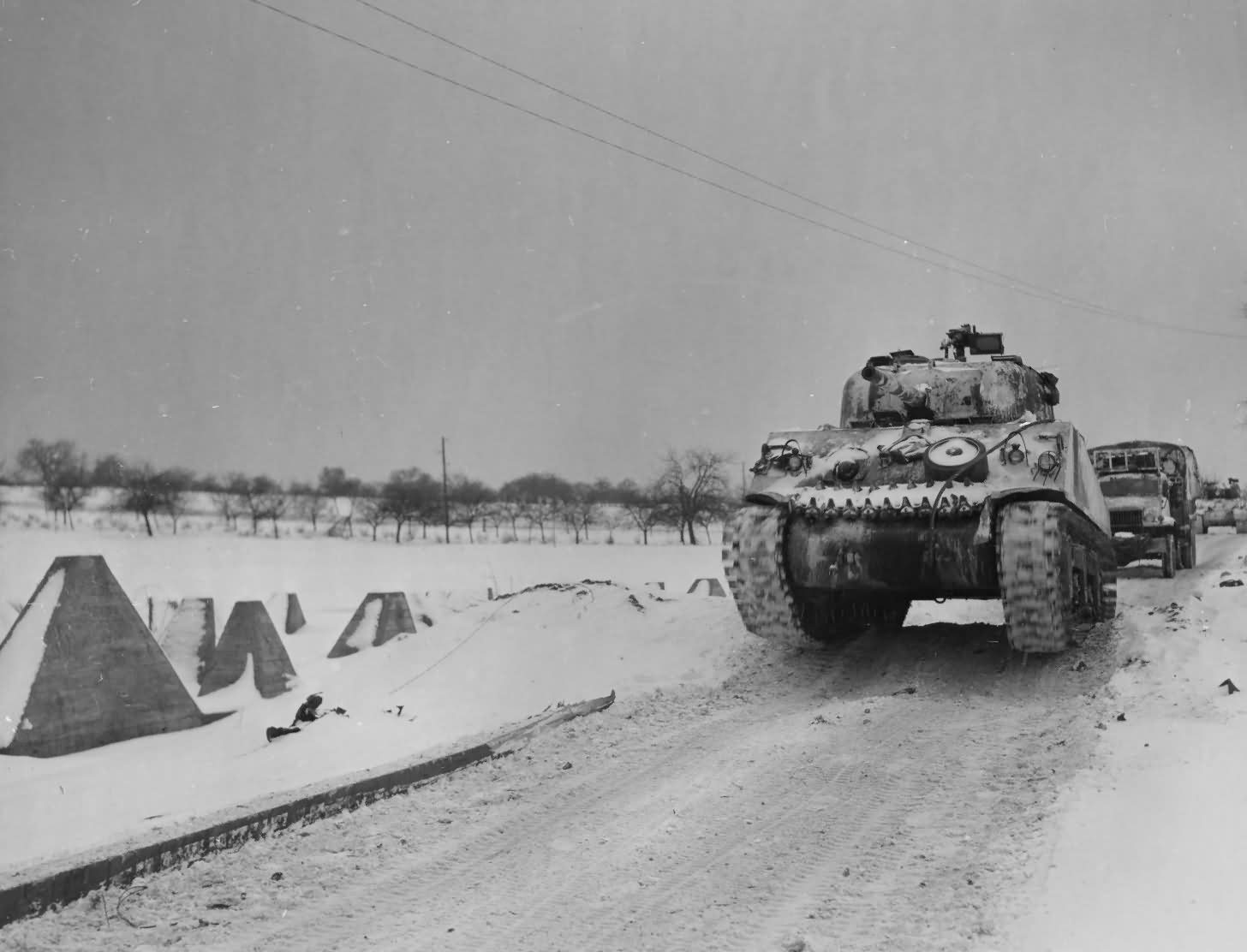 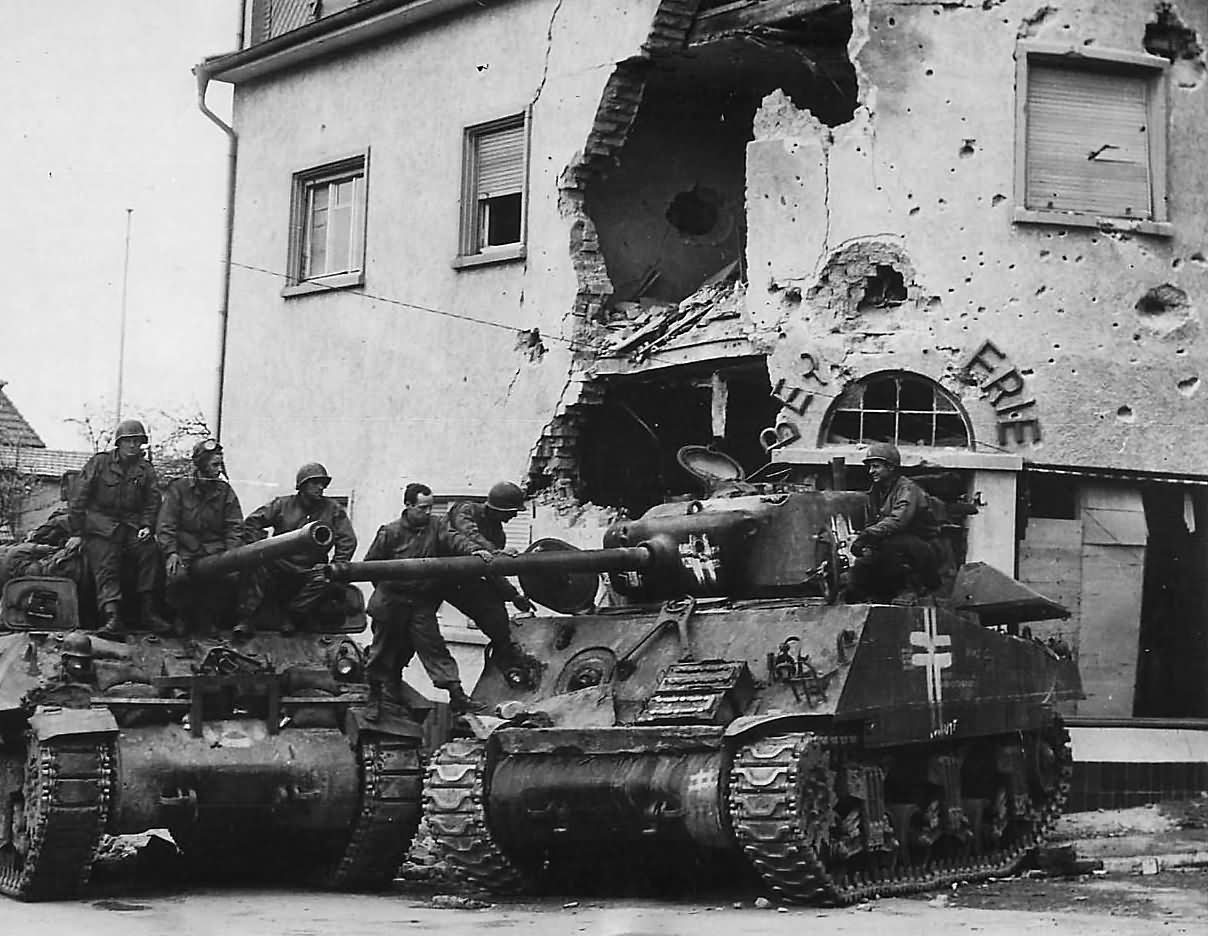 The 11-AD lander in Normandy, France on Dec 17, 1944, and was immediately moved to defend the Givet–Sedan sector on Dec 23, as a mobile reserve response to the German Ardennes Counter-Offensive. The 11-AD moved to the vicinity of Neufchâteau, Belgium, on Dec 29, and attacked toward Houffalize against strong opposition on Dec 30, suffering heavy losses. The next day, CCB attacked Chenogne as CCR assaulted Acul. 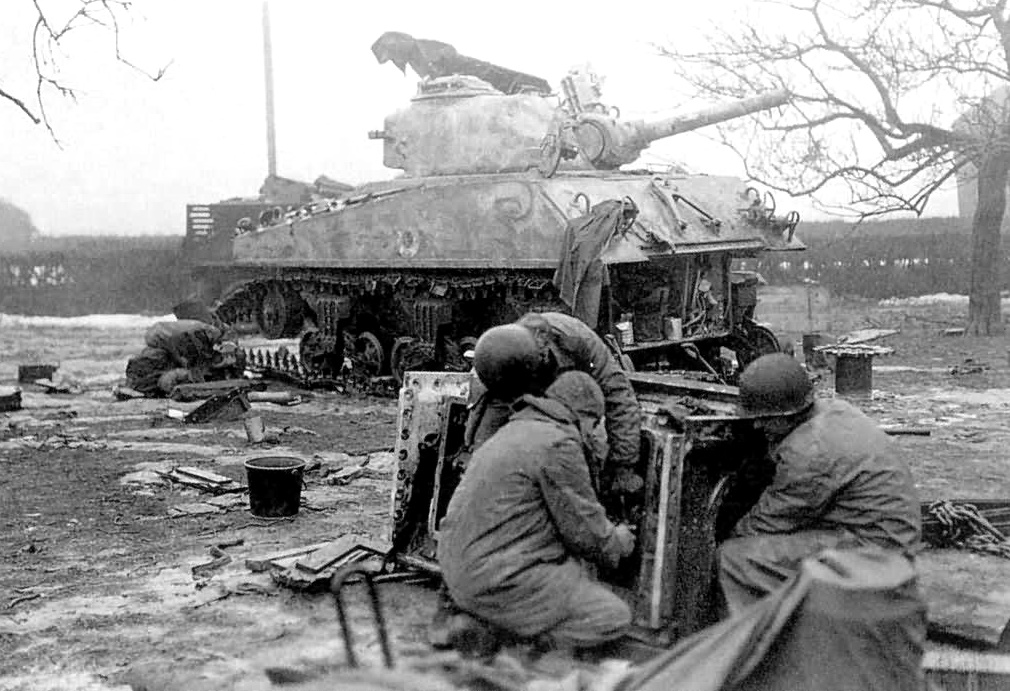 CCA attacked east of Rechrival Jan 1, 1945, and the following day CCB captured Senonchamps. After defending the Bastogne Highway in fierce combat, the 11-AD attacked north on Jan 13, and enveloped Bertogne before being stopped the next day by German defenses. CCA reached Velleroux on January 15 1945 but fell back under counterattack and then stormed it successfully the following day. The division assumed responsibility for the Hardigny – Bourcy line on January 18 1945 and began advancing in the wake of German withdrawals on January 20 1945. CCA crossing the Luxembourg border without opposition on January 22 1945. It then patrolled in the vicinity of Bois de Rouvroy.

The division relieved the 90-ID east of the Our River Feb 4/5 1945. The 11-AD attacked then into the West Wall on Feb 6, 1945, as CCR seized Hill 568, but was unable to make further progress. A surprise assault, omitting artillery preparation, enabled the division to overrun numerous pillboxes on Feb 18, 1945.

By the next day CCR had captured Herzfeld and mopped up the Leidenborn area. Sengerich was cleared against decreasing resistance on Feb 20, Roscheid fell next day, and its final objectives of Eschfeld and Reiff by Feb 22. It then consolidated. CCA moved to Manderfeld and started relief of the 87-ID on Feb 25, and this was completed the following day. The division attacked with CCA on Mar 1, to assist the 87-ID reduce strongly defended pillboxes around Ormont. 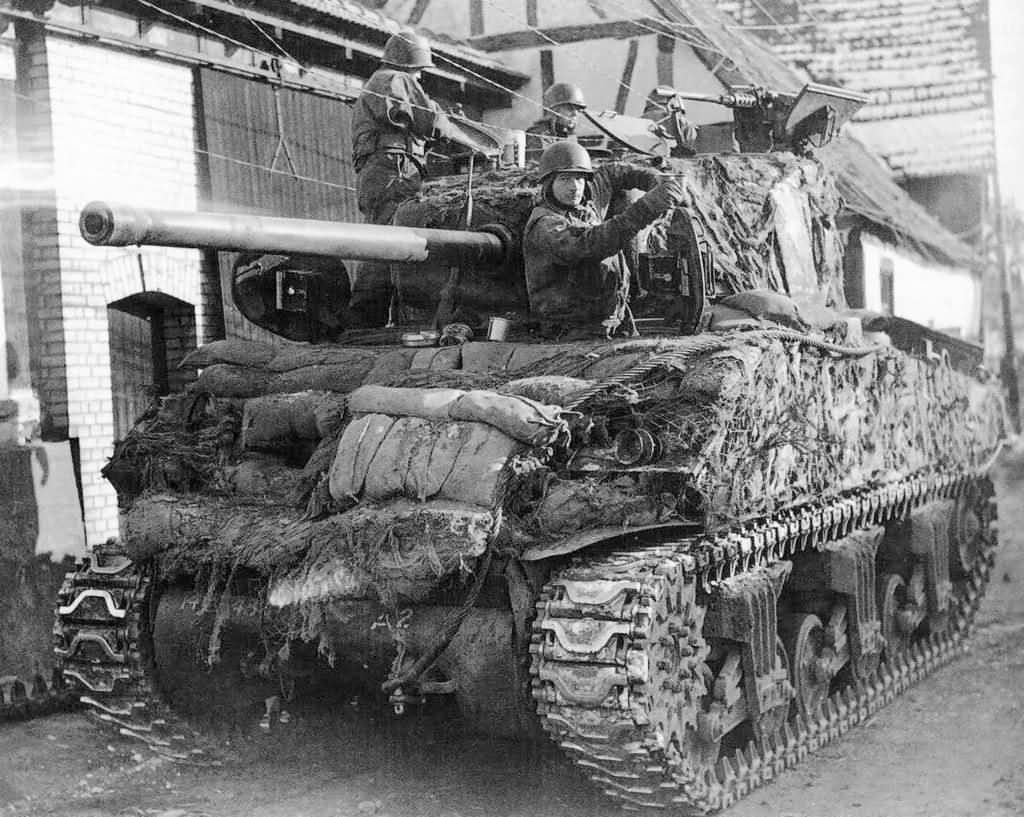 CCB crossed the Pruem River and attacked through the 4-ID on Mar 3, toward the Kyll River against light resistance, which it reached the next clay near Lissigen under fire from the far shore. CCB then crossed at Ober on Mar 6, and established a small bridgehead against strong opposition. CCA attacked through the lines of the 90-ID on Mar 7, at Lissigen and took Kelberg after fierce combat. The division reached the Rhine River on Mar 9, with CCA at Andernach and CCB near Bröhl and then mopped up. The division then went into reserve.

It passed through the Bullay bridgehead of the 89-ID on March 17, and began its second drive to the Rhine at Worms. It advanced rapidly against disorganized resistance and CCB took the airport south of the city and entered Worms on Mar 21. The division assembled near Alzey and relieved the 4-AD of the Oppenheim – Worms sector of the Rhine on Mar 23, and assumed a defensive position.

The division moved to the Main River at Hanau on Mar 28, and attacked the next day through the lines of the 26-ID toward Fulda. It battled past Gelnhausen which fell on Mar 30, and next attacked on Apr 1, near Schlitz. It pushed rapidly to the Werra River near Meiningen and established a bridgehead the next dlay. The division then cleared the Thuringer Wald as CCA took Suhl in one house-to-house fighting Apr 3/4, and CCB captured Oberhof on the latter date. CCR took Meiningen on Apr 5, and the division reassembled and cleared along the Schleusingen-Hildburghausen line Apr 7/8. Supported by artillery and aircraft, the division attacked toward Coburg on Apr 10, and the city surrendered the next day. It renewed its offensive on Apr 12, and established bridgeheads over the Hasslach River at Kronach and Marktzeuln. 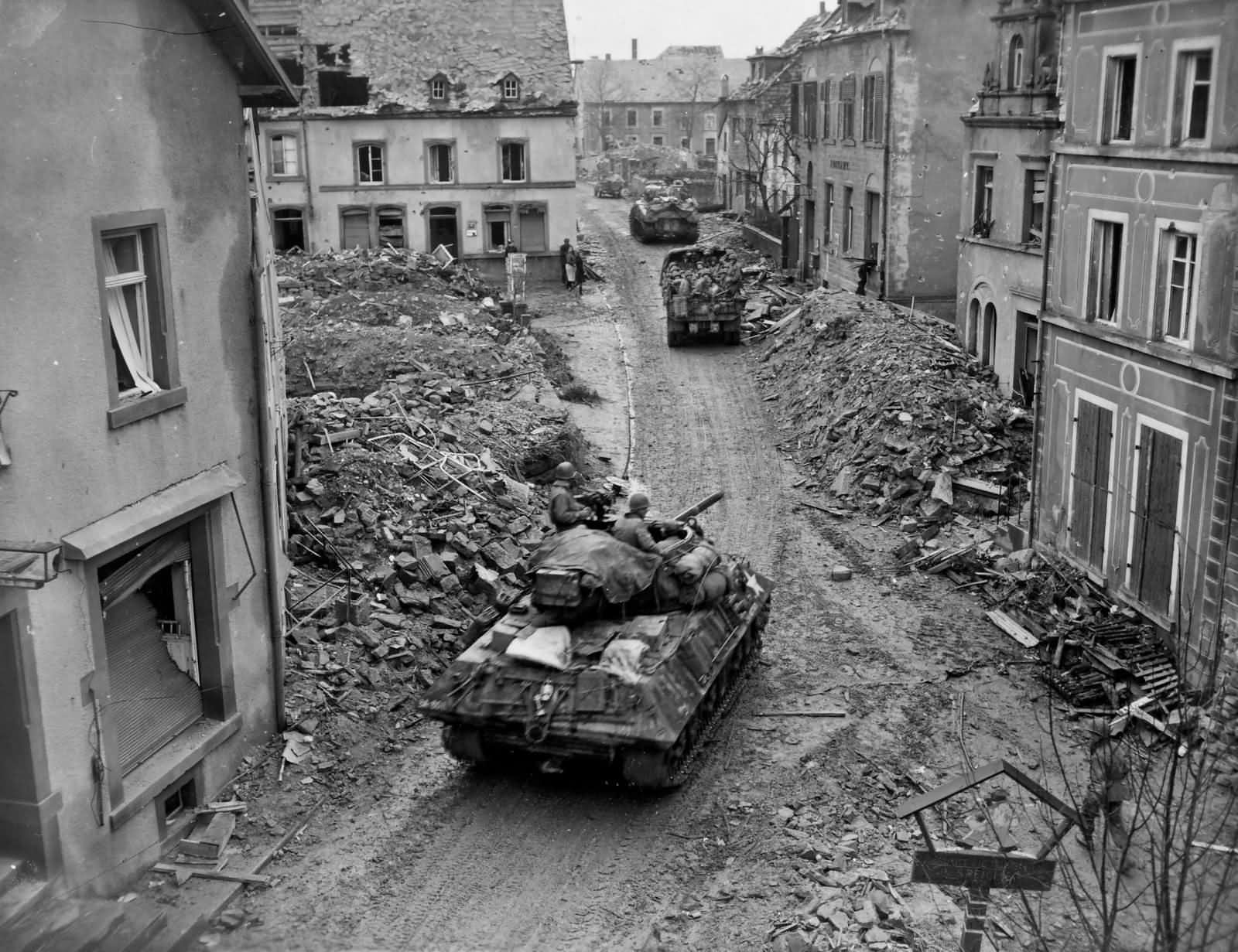 After confusion with the 14th Armored Division columns on the roads leading to Bayreuth, the city fell Apr 14. The division relieved the 71-ID along the Bayreuth to Gefrees line on Apr 17, and attacked to take Grafenwohr on Apr 19. The division renewed the offensive on Apr 22 and reached the Naab River with CCB at Schwarzenfeld and then drove southeast from Cham along the Alpine Highway to clear Regen on Mar 24. Kreuzberg was captured the following day, and on Apr 29, the division attacked south. CCA took Wegscheiden on the Austrian border after heavy combat on Apr 30, then the 11-AD advanced rapidly to take the Urfahr – Linz complex on May 5. The 11th Armored Division met advancing Soviet forces at Amstetten on May 8 1945.