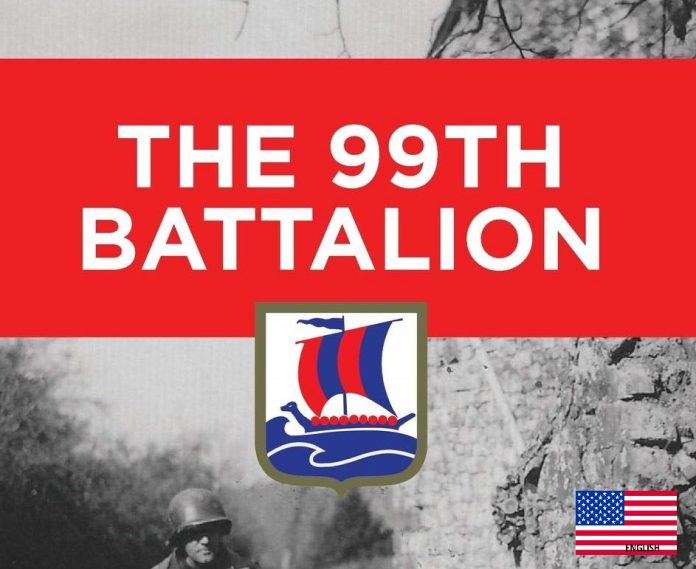 Available for the first time to the English-reading public is a history of one of the most unusual units in WW-II. The book itself has long been available in Norwegian, written by Norway’s preeminent crime novelist. The author, Gerd Nyquist, had been a bestselling mystery writer in her home country for twenty years when the unusual story of an American battalion of Norwegian-speaking soldiers caught her attention. Her book, 99th Battalion (Bataljon 99 in Norwegian), is an unparalleled history of this unique battalion, created from her interviews of veterans of the unit in both the USA and Norway. First published in 1981 in Oslo, in Norwegian. It has only been available in English in private subscription printings for unit veterans in the early 1980s. This greatly revised and expanded version of the book is now available in a US Edition though the support of the 99th Infantry Battalion Educational Foundation.

Until the Nyquist book, the history of the 99-IB (S) was forever standing in the shadows of another, better known American ‘ethnic battalion’, the 100th Infantry Battalion, formed of Japanese Americans (Nisei) from Hawaii shortly after Pearl Harbor. The 99th Infantry Battalion was created by the War Department in 1942, specifically formed of Norwegian nationals living in the United States and Americans of Norwegian extraction. These thousand Norwegian-speaking ski troopers would go on to serve with some of the most storied units in WWII. 99th Battalion follows the unit’s formation in Minnesota, training at 10.000-foot elevations at Colorado’s Camp Hale, and its combat history in the European Theater of Operations. The Battalion trained as ski troops with the storied US Army 10th Light Division (Pack, Alpine), in the winter of 1942-3 (later redesignated the 10th Mountain Division). In England, they were assigned to Gen Omar Bradley’s First Army Headquarters as its tactical combat force. The men of the 99th served with the Provisional Ranger Group after D-Day and were attached to the 2nd Armored Division (Hell on Wheels) and the 30th Division (Old Hickory) in hard fighting across Northern Europe. When the Battle of the Bulge erupted, the Battalion led Task Force Hansen to plug the gap in the Allied lines at Malmedy, Belgium, where only elements of an American combat engineer company held the critical town against advancing Nazi Panzers.

Withdrawn from the lines after a month of continuous fighting in bitterly cold conditions, the 99th joined veterans of the First Special Service Force (Devil’s Brigade), including over 400 members of Darby’s Rangers, to form a new regiment with a secret mission to Norway. Also told is the story of a selected group of these men who trained with Wild Bill Donovan’s Office of Strategic Services (OSS) as the Norwegian Operations Group. These men of NORSO, the predecessors to today’s US Army Special Forces teams, jumped behind German lines in France and Norway to conduct sabotage missions and link up with the resistance fighters until they could be relived. An experienced storyteller tells this collection of veterans’ interviews. Nyquist brings the memories and stories of many veterans together with her research in the archives in Norway and the United States to share the history and achievements of these men.