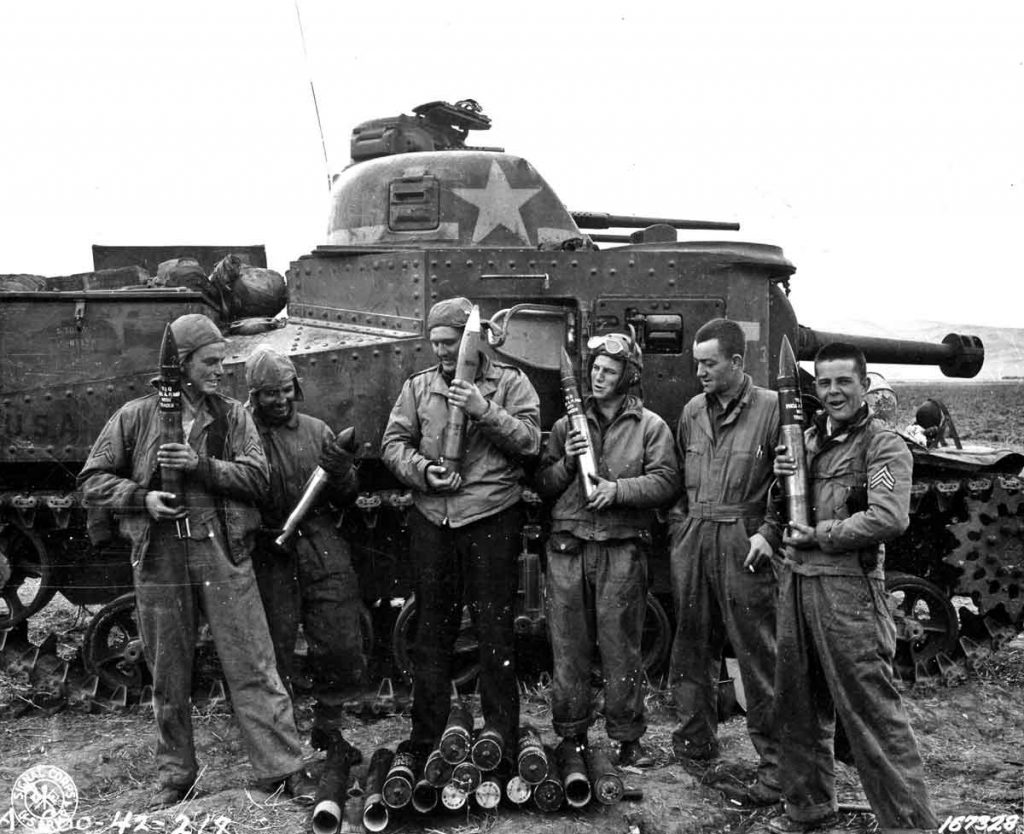 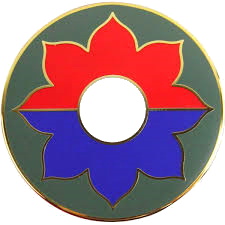 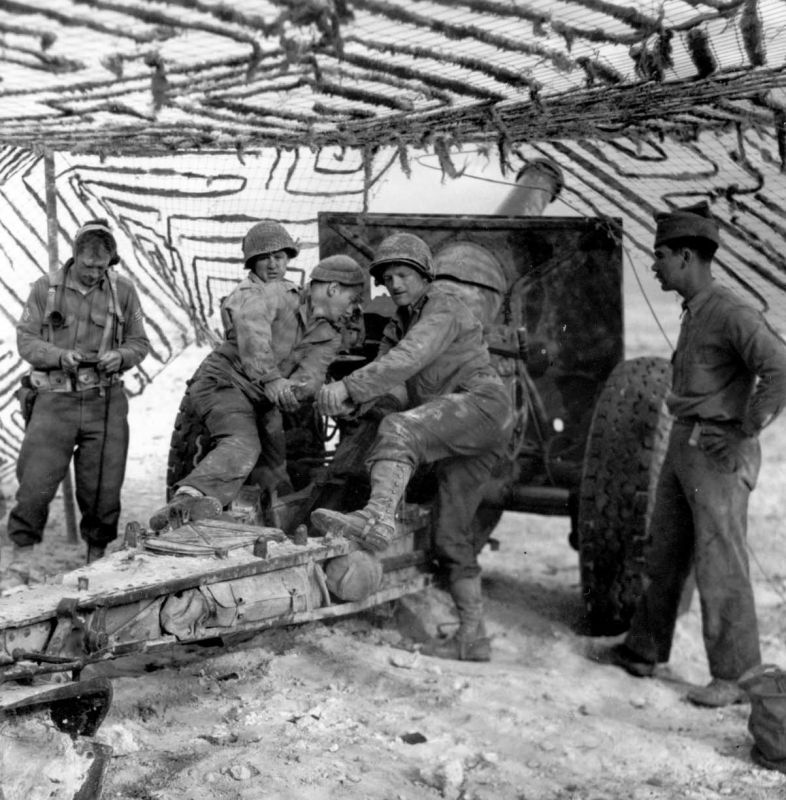 General: Units of the 9-ID Artillery (less the 60th Field Artillery Battalion which had been detached) moved on Mar 25/26, 1943, to bivouac areas in the vicinity of Gafsa. Unit commanders made map and terrain recon on Mar 26, but, upon returning to the Artillery CP, which had been established in the palm grove at El Guettar, they were informed that the attack had been postponed 24 hours and that units would remain in bivouac for the night Mar 26/27. During the day of Mar 27, the unit commanders continued recon, and at 1300, the 26-FAB, followed by the 2/17-FAB, moved to the south and east, around Chott El Guettar to a bivouac in wadis south of the Chott. At dusk, they occupied the positions that had been previously selected. The 84-FAB had been supporting the 1-ID. They remained in their same positions and shifted their support to the 9-ID. The 34-FAB left their bivouac at dusk and followed the 3/47-IR, to positions along the Gafsa Gabes Road.

Report
(Mar 28, 1943) All positions were thoroughly dug in and preparations were made to support the attack at 0600, Mar 28. No registration was permitted until 0600, and radio silence was ordered until that time. The 2/17-FAB and the 26-FAB were placed in direct support of the 47-IR. The 84-FAB was placed in general support along with the 34-FAB, 150 rounds of ammunition were ordered dumped at the gun positions, and the trains wore to be replenished at the Gafsa Depot immediately. No plan of offensive fires was permitted by the situation. All units sent forward observers out to be in a position to support the attack by observed fire. The firing throughout the day was light. Some battery positions were located and fired upon. At 0835 the CO of the 26-FAB requested permission to displace forward. This was granted and Battery A was sent forward. 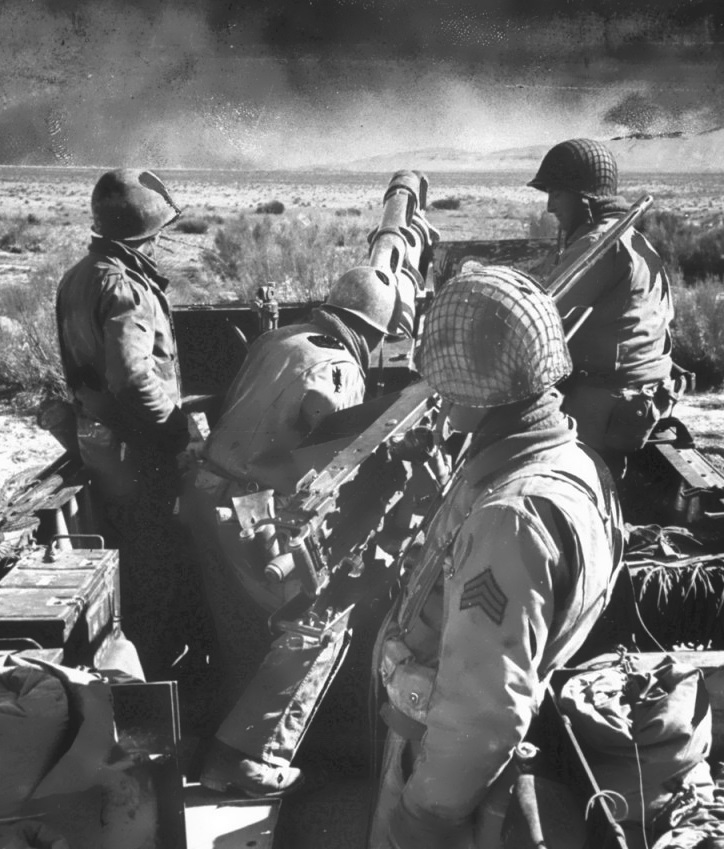 This battery was shelled while on the road but no damage was done and the battery occupied the position. Later the remainder of the Battalion moved to the new position. No other unit moved forward throughout the day. Harassing fires were fired throughout the night on lines of communication.

(Mar 29, 1943) Early on the morning of Mar 29, the attack was continued. The enemy was driven back along the entire line, artillery fire delivered was considerably increased and was reported as very effective. Battery C of the 34-FAB which had moved forward at 0300 to positions in the vicinity of [3069-68156], was heavily shelled throughout the day. Enemy artillery registered on each gun and tried to knock the battery out. The damage was very slight, one 2,5 ton truck of the AAA being destroyed. The advance was again halted by the enemy, and the positions were stabilized for the nights. The enemy was continually harassed by our artillery fire throughout the night. The Division and Division Artillery CPs were harassed by enemy planes throughout the night, their planes being overhead at least eight consecutive times through the nights, Battery C established a dummy position at the point where they were shelled and moved about 500 yards to a new position.

(Mar 30, 1943) On the morning of Mar 30, a planned 20-min offensive fire was prepared to launch the infantry attack at 0600. Requests were made to Corps Artillery for additional artillery support, so, the 178-FAB (155-MM HOW), the 1/17-FAB (155-MM HOW), and the 1/36-FAB (155-MM GUN) were assigned to assist in the preparation. A total of 15 battalion concentrations and six battery concentrations were placed on Djebel Kreroua, Djebel Lettouchi, and some fire on Hill 369. The infantry advanced and was able to capture Djebel Lettouchi partly. They were then driven from their position by a determined enemy counter-attack. Continued heavy fighting was experienced during the day.
Throughout the day the enemy artillery fired on the dummy position established by Battery C, 34-FAB. They hit a can of gasoline left at the position and started a fire. This was evidently taken as a hit on a battery, for the enemy continued to shell the position throughout the day and waste a large amount of ammunition.
The Survey of the front lines by the artillery survey party proved that the infantry had not reached their objective. The bombing of the Division and Division Artillery CPs continued throughout the night. Mostly the raids were of a harassing nature and were continuous throughout the night. 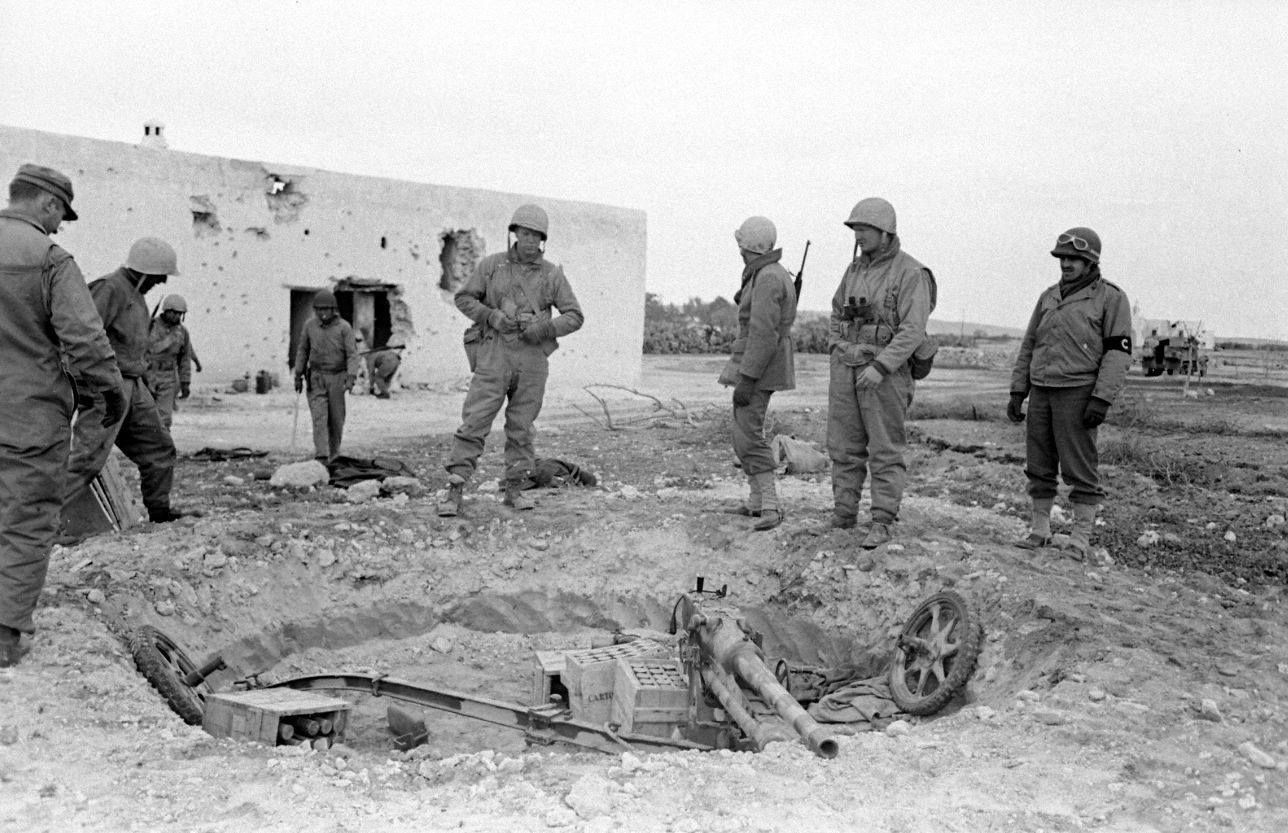 (Mar 31, 1943) The action was very light on Mar 31. The infantry attempted to filter through enemy lines. The artillery fired very few rounds most of which were fired on targets of opportunity and harassing missions. Enemy air activity was almost continuous throughout most of the day. The attacks were mainly of a harassing nature and were very ineffective. The Division CP and Division Artillery CP were again harassed continuously throughout the night by enemy planes circling and dropping flares and bombs. The damage was slight and effect was poor as personnel had learned to sleep in trenches. An amusing incident of the day was the surrender of more than 100 Italian soldiers to a single man of the 34-FAB.

(Apr 1, 1943) On Apr 1, the action continued to be light. Enemy tanks were reported several times throughout the day. Several of these were destroyed by artillery fire at maximum ranges. The 34-FAB destroyed one 88-MM gun, and the 26-FAB fired on enemy personnel with excellent effect. The day was marked by considerable shelling by enemy artillery and by considerable air activity. The CPs of Division and Division Artillery were again harassed during the night but on a decreased scale.

(Apr 2, 1943) Enemy tank activity increased, and the result was a large number destroyed by artillery fire. The 26-FAB destroyed at least 8 tanks during the day. Also, a number of trucks were destroyed in addition to a 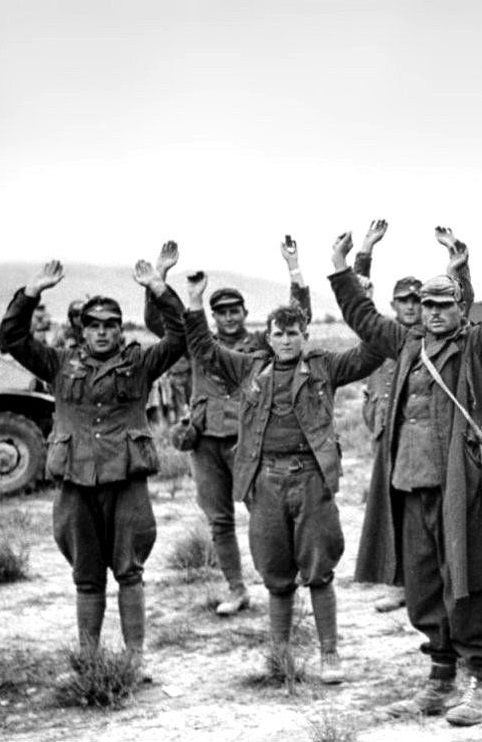 large quantity of enemy equipment. The day’s action, if it did nothing else, proved the effectiveness of 105-MM fire against tanks at extreme ranges, practically the entire day’s firing being at ranges of 10.000 to 12.000 yards. This was true of the entire engagement, due to the lack of cover afforded by the terrain at closer ranges. During the night, the Division Artillery survey section surveyed the front lines by firing rockets and triangulating them in. Results were excellent and the front line battalions were definitely located. The infantry had not reached their objective.

(Apr 3, 1943) The firing was normal throughout the day, and the enemy seemed to be withdrawing. Fighting was heavy throughout the afternoon, and the artillery fired a considerable number of rounds in preparation at 1600. The infantry advanced and was able to seize Djebel Lettouchi. At 1800, the 26-FAB was heavily bombed by a flight of 18 JU-88s, 4 ME-109s, and 8 FW-190s. Damage consisted of one 2,5 ton slightly damaged and 6 slight casualties. Reports indicated that our fighter planes and antiaircraft were very effective, shooting down 14 enemy planes. A point of interest was the attempt of the 4 ME-109s to draw off the Spitfire cover by making a diving attack at another point prior to the attack by the bombers. The Spitfires did not fall for the trap. The 34-FAB, moved Battery C to a new position at [3341-6929].

(Apr 4, 1943) On Apr 4, the day was again marked by the considerable activity of the artillery, the 26-FAB again having a field day. During the day it destroyed 5 tanks, an ammunition dump, and several trucks. The 34-FAB, fired on motor vehicles starting several fires and fired on tanks several times during the day, dispersing the tanks. The air patrol of the day consisted of eighteen P-51s which met no resistance. Air activity definitely had decreased and remained that way for the duration of the engagement.

(Apr 7, 1943) All troops started to move forward. Little if any resistance was encountered. By 1200, Djebel Berda (Hill 772) was taken and troops continued the advance. Djebel Lettouchi was occupied, and at 1518, the tanks of Benson’s force were reported in the rear of Hill 369. Shortly after this Hill 369 fell, and Benson’s force was moving east. At 1705, Benson’s force contacted the British 8-A at [5885], and the Battle of El Guettar was over. At 1730, the 34-FAB was ordered to move from their present position to concealed bivouac at Bou Chebka. The Division Artillery Headquarters, the 26-FAB, and the 84-FAB followed the morning of Apr 8. 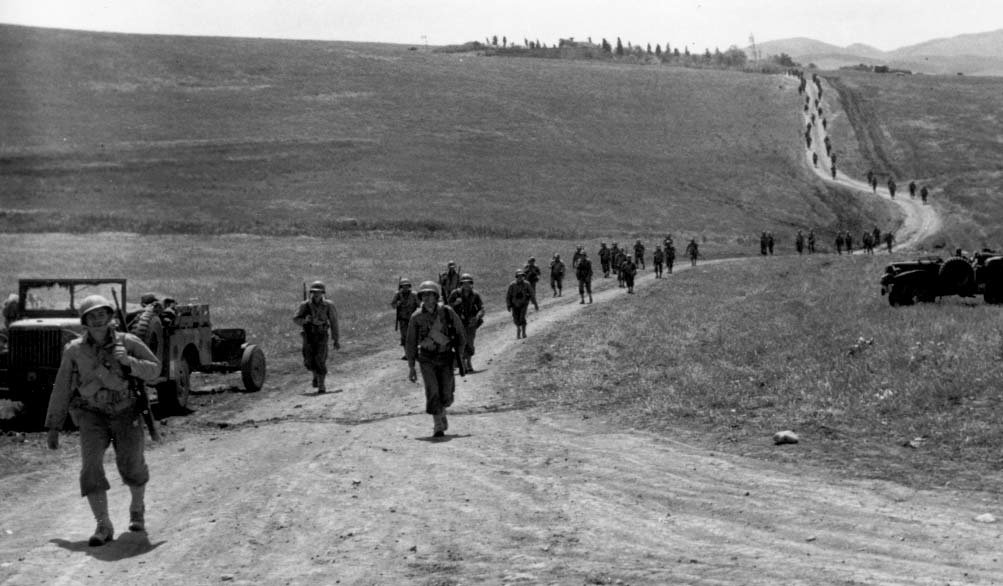 (Ammunition Expended) During the Battle of El Guettar, the units of the 9-ID Artillery and attachments fired the following amounts of ammunition:
26-FAB, 14.092
84-FAB, 7775
2/17-FAB, 5732
34-FAB, 3784
This, of course, does not include the large number of rounds fired by the 1-ID Artillery and the 13-FA Brigade in their excellent support of the Division upon the occasions required.