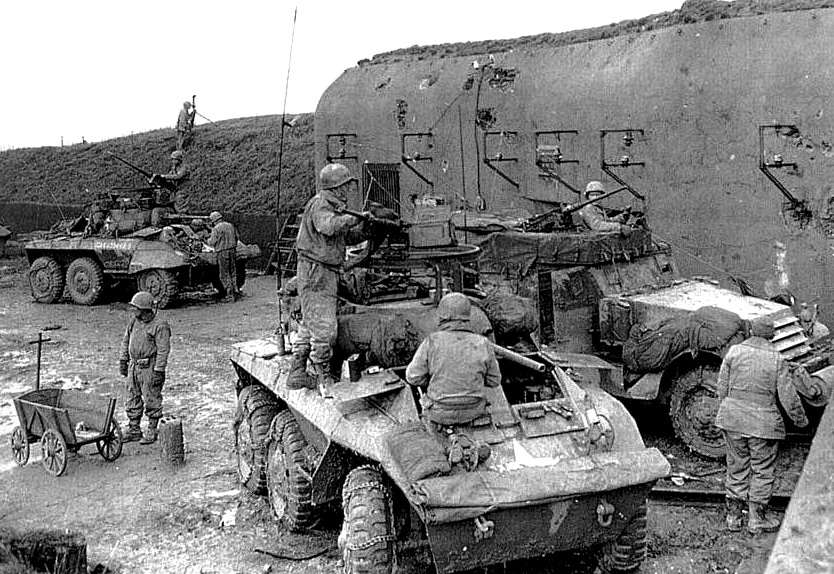 The 38th Cavalry Regiment was a regiment of the US Army first established in 1916. It was the regimental affiliated with three reconnaissance and surveillance squadrons (1/38, 2/38, 3/38) that were part of battlefield surveillance brigades. During World War II, the 3rd Recon Squadron was activated as part of the 1st Cavalry Division on Nov 15, 1942, at Fort Bliss (TX). The 38-CRS shipped from the New York POE (Port of Embarkation) on Nov 15, 1943, arrived in Scotland five days later, and disembarked at the Firth of Clyde. On Nov 21, 1943, it was redesignated as the 38th Cavalry Reconnaissance Squadron (Mechanized) at Exter, England, and assigned to the 102d Cavalry Regiment (Mechanized). Following a period of training in the UK, it arrived in France on Jun 12, 1944 (D+6), shortly after the Normandy invasion. The 38-CRS entered Paris on Aug 25, 1944, and is recognized as the first American unit to enter the capital city. It reached Belgium on Sept 4, 1944, and Germany on Mar 30, 1945. In Aug 1945, it was located at Prestice, Czechoslovakia. Returning then to the US, the 38-CRS was inactivated on Nov 25, 1945, at Camp Kilmer (NJ). 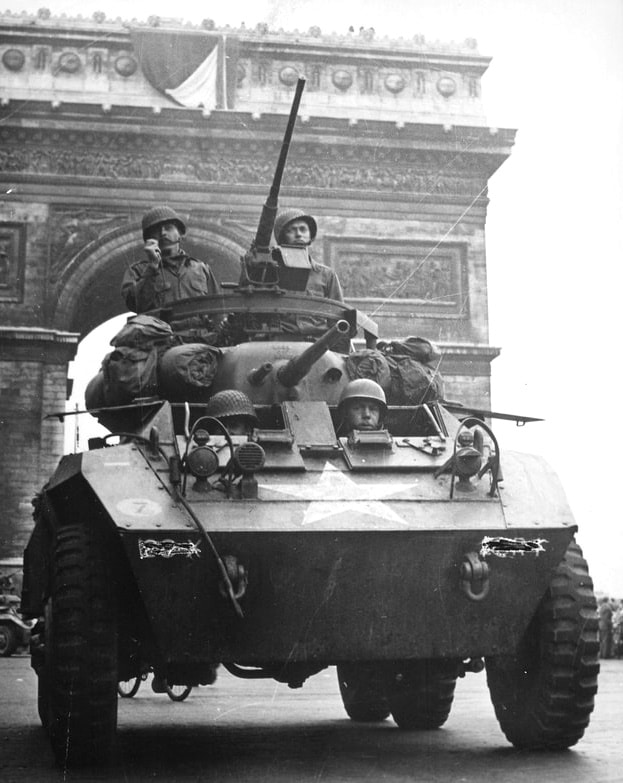 The Squadron continued to defend in its assigned sector along the Siegfried Line, occupying a line of trenches, machine gun emplacements, light tank outposts, AT positions, and individual fighting holes. The zone included the town of Monschau, the eastern portion of Mützenich; thence north, generally along the Railroad to a point above the Railroad Konzen RR Station. Constant physical contact was maintained and fires were coordinated with the 102-CRS on the left, north, and the 395-IR (99-ID) on the right, and south. The troops were disposed from left to right (north to south) as follows, Troop A, Troop B, 3rd Platoon Fox Co, 1st Platoon Fox Co, Troop C, and 2nd Plat Fox Co. The Squadron CP was located in the Monschau Post Office building. The 2/60 and the 3/60 (9-ID) moved in the area in the afternoon and prepared to dig in secondary defensive positions in support of the Squadron.

An unbroken MLR (Main Line of Resistance) was maintained employing .50 Cal and .30 Cal Browning machine guns laid in with grazing cross-fire on the final protective line and registered on range cards. These included the light tank positions using their Coaxial Light machines-guns (.30). Daily improvement of the warning trip flare system and the wiring-in of the entire front and all positions continued satisfactorily. In addition to the line of outposts, troops maintained listening posts well forward, which were manned during darkness and poor visibility. Security and combat patrols were dispatched regularly. The terrain in the squadron’s sector consisted of a series of deep, rocky draws on the right running generally east and northeast and diminishing in depth toward the north into a rolling country. The main line of resistance was devoid of woods and overlooked a country of fields bounded by hedgerows that offered concealment but little cover.

The central portion of the line in the B Troop area was backed up by dense forests rendering vehicular operation practically impossible and the established road required constant maintenance by the attached engineer platoon. The elaborate wire communication system, supported by radio, linked all units and outposts and tied in with the headquarters of the V Corps, 102-CG, supporting artillery and adjacent units. 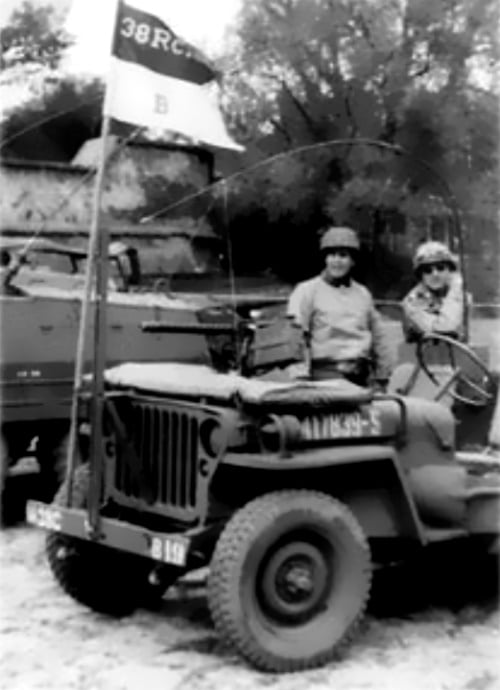 M/Sgt George Cassateri was transferred to the Squadron HQs as communications chief and S/Sgt Henry Hill went to Troop C as a communication sergeant. With its attached platoon of self-propelled TDs from Charlie Co 893-TDB in anti-mechanization positions in the vicinity of the RR Station in Konzen – Entenpfuhl along the Belgian – German border, Troop A was disposed with its 1st Platoon in contact with B Troop of the 102-CRS on the north; the 3rd Platoon in the center; and the 2nd Platoon on the right. A night listening post was manned outside Konzen. The troop command post operated well forward in a house along the road Mützenich – Monschau. A four-man listening post patrol led by Sgt Coombs left at 2100 advancing along an assigned route to and there, remaining in observation on one enemy pillbox. This patrol returned at 2400 without having seen or heard any German activity.

The 2/60-IR moved into the rear of the troop and began digging in. B Troop was dug-in with its 3rd Platoon on the left, tying-in with A Troop, 1st Platoon in the center, and the 2nd Platoon on the right. The CP occupied a house on the Mützenich – Monschau highway. A daylight recon patrol of seven men led by Cpl Borsello proceeded to investigate an enemy pillbox located in the vicinity of Menzerath. Reaching a point 15 yards to the right of their objective, they were fired on by small arms, first from the pillbox then from their front and right front. In withdrawing under this terrific crossfire they managed to locate five enemy positions. Suffering only one slight casualty they avoided a flanking patrol and returned under supporting artillery, direct 37-MM fire, and .50 Cal machine gun fire from their platoon positions. T/4 Ballantone distinguished himself by ably assisting the exhausted radioman and, at the risk of his life, carried his radio and equipment to safety. T/5 Buchman and Pvt Chernock were each credited with killing a German. Commencing at 1430 the 3/60-IR moved in behind Troop B to lend support. Overlooking the enemy-held town of Menzerath and the draw to its immediate front, C Troop occupied a line of trenches on the hill above Monschau with its 3rd platoon on the left, tying-in with the 1st Platoon Fox Co, its 2nd platoon in the center and its 1st Platoon on the right (south). The CP occupied a house in the town directly below.

An ambush was maintained throughout the night of Nov 30 at (949190). Patrolling was limited in this sector due to the barren terrain almost devoid of concealment. During the 24-hour period, the six 75-MM howitzer assault guns of E Troop fired 645 rounds from their battery emplacements in Mützenich. Adjustments on their fire missions were sensed by units of the line, by their own observation posts at (931208), (947187), (943182), and by a post in charge of Sgt Poll and a crew from C Troop with the 395-IR (99-ID) at Höfen. Attached to the 102-CG, the 62-AFAB continued to lend support to its 105-MM concentrations which were coordinated by Squadron S-3. 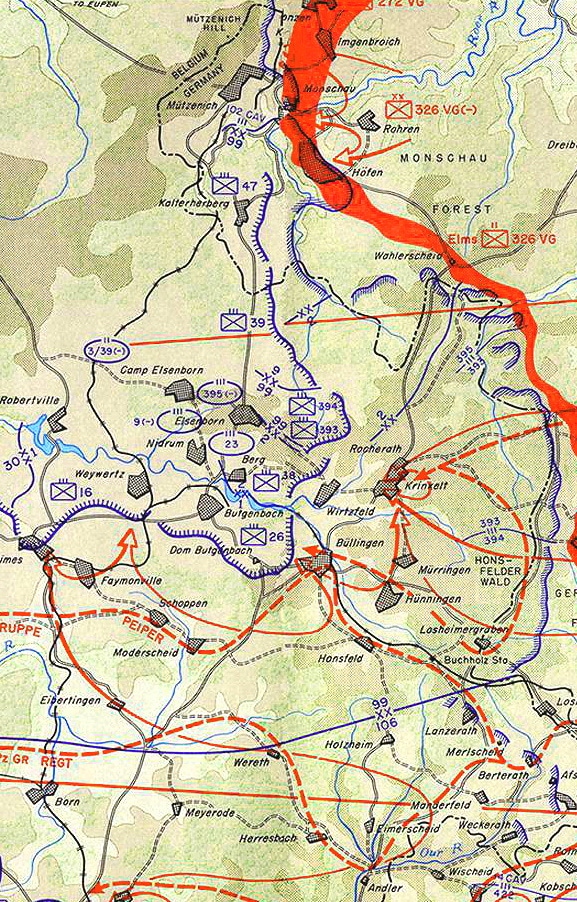 At 1220, the Field Artillery observation plane was fired upon without effect by small arms from the vicinity of Konzen. Fox Co continued to outpost the approaches to the town of Monschau from the north, east, and south, using its light tanks in mutually supporting concealed positions. The two attached SP tank destroyers were positioned in the vicinity of the RR Station. The company headquarters operated from a house near the town hall with excellent motor maintenance accommodations nearby. One daylight patrol of 3 men under Sgt Petrucci reconnoitered Stillbusch (crossroad K-16 Kirschensteinweeg – Hengsbruchelchen) as far (945205) and (945204) without incident. A seven-men patrol under S/Sgt Lindquist again remained in observation of Stillbusch all night and examined the grounds and houses at first light without detecting signs of German occupancy.

The attached 3rd Platoon of Able Co 112th Engineer Combat Battalion assisted all troops in placing and maintaining warning trip flares and in laying concertina wire along the entire front and around the outpost positions. Several German mortar and artillery shells were removed and destroyed. It also continued to maintain the road net in the Squadron area.

The Squadron Medical Detachment continued to function in its routine duties of sick call and the care of the sick in quarters at the infirmary adjacent to the Squadron command post in Monschau. Headquarters and Service Troop (Rear Echelon) carried on with the administration, motor maintenance, and supply of the Squadron from its base on the outskirts of Eupen, Belgium.

The Squadron defended along the Siegfried Line, making no changes in the positions of its subordinate units except to improve emplacements for better fields of fire and to strengthen the Main Line of Resistance. Most of the work of laying concertina wire, warning flares, and building up defenses had to be done under cover of darkness because of excellent visibility. All machine guns on the line were periodically test-fired. On the afternoon of Dec 3, 40 to 50 aircraft of the Me 109 and Fw 190 types ranged throughout the squadron sector, strafing, bombing, and shooting rockets, but causing absolutely no damage to personnel or material. It was observed that even though no enemy targets had appeared in several months, the local AAA units proved to be efficiently alert and immediately opened fire on the low-flying planes. This attack resulted in many losses to the enemy and was an excellent demonstration of the growing inefficiency of the Luftwaffe. 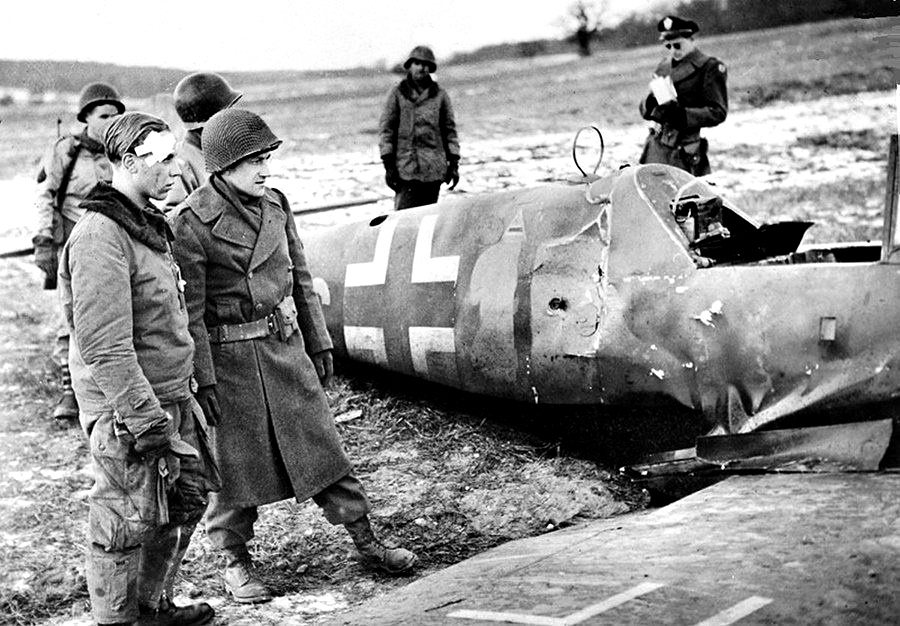 maintained with the 78-ID as well as with the 102-CRS to the north and, in addition to Lt Peterfreund from the 99-ID, Lt Wilson reported the 2-ID to the south. Lt Peterfreund was replaced on Dec 12 by Lt Hare from Item Co 395-IR. Capt Scott reported as liaison officer from the 6-FAB and

the 7-FAB (1-ID) but he and their support were removed after three days. Capt Hazeltine, who remained a representative from the supporting 62-AFAB, lent valuable assistance in coordinating the fire of all artillery. Lt Dickson of A Troop remained with the 310-IR as radio liaison officer during the attack by the 78-ID to Kesternich. Extensive instruction in the 81-MM mortar was conducted by the recon troops, including increasingly accurate practice firing on enemy targets which caused known casualties and damage. Lt Dickson supervised the training in A Troop. B Troop had the added assistance of the mortar platoon sergeant of the 395-IR and also assisted Lt O’Brien in C Troop. Personnel of the HQs Platoons were included in all the training and manned mortars in the vicinity of the troop command posts. During the period, 643 rounds of enemy artillery and mortar were reported to have fallen in the Squadron zone causing few casualties or little damage. Realizing the importance of rapid submission of Shell Reports, all personnel were constantly alert to pick up pertinent information. Diver Reports were also submitted on Robot Bombs. Improvements in the protection of personnel, tires, and other material was constant. 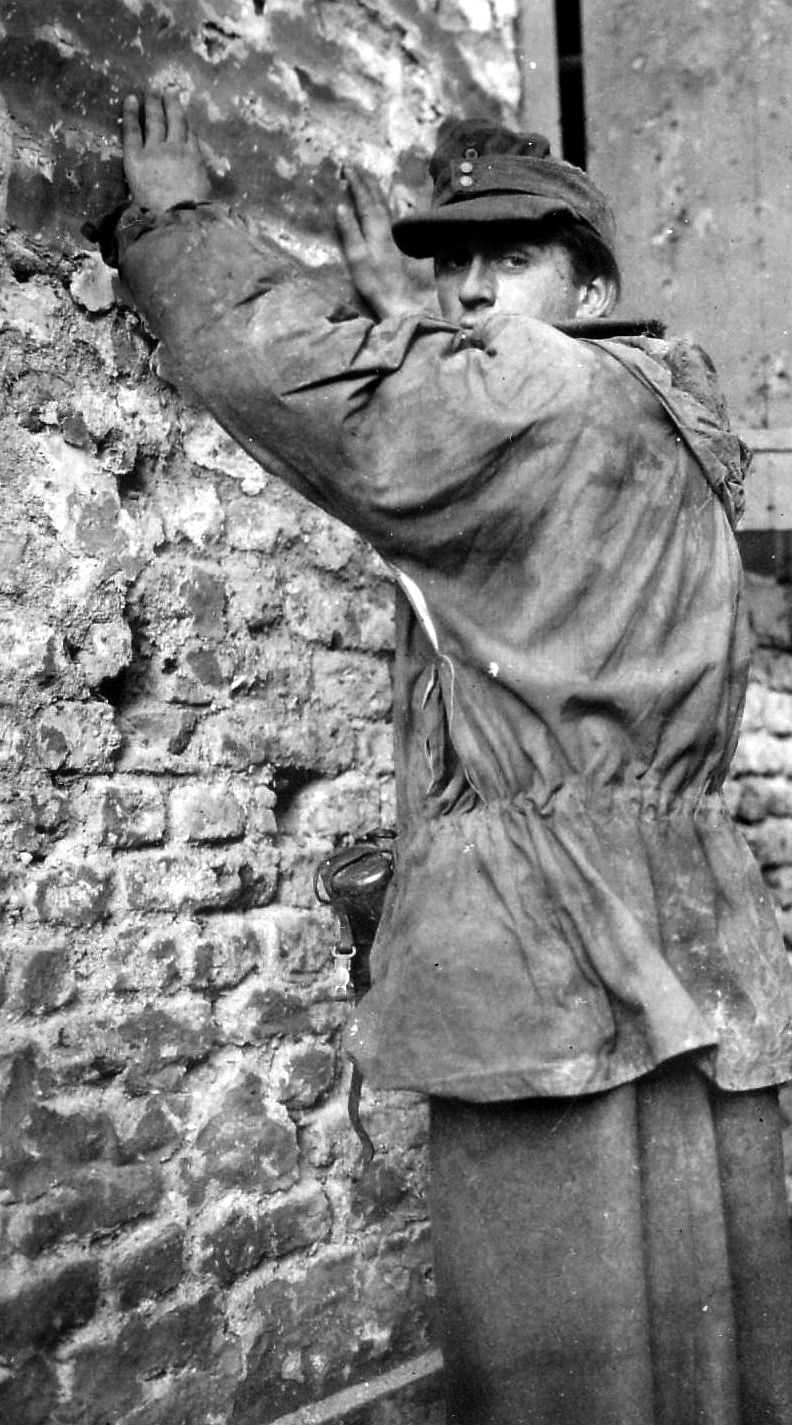 Thailand recently began curtailing its illegal trade in marine coral species, primarily those in the ornamental aquarium trade. New laws, higher penalties, beefed-up enforcement and a national mandate to reduce the trade are all part of the efforts.
https://news.mongabay.com/2023/02/thai-government-turns-its-sights-on-illegal-coral-trade/

There are 65,000 Widows nationally already signed on to prove this.

Yet they still find a way to send another $2 billion to Ukraine? 🧐

Covid killed very few people it was the hospital protocol that murdered millions.

TRAGIC: 6-year-old Anastasia Marie Weaver #diedsuddenly at her home. Her father found her dead in her bed.

Her mother is a nurse and she heavily pushed the vaccine on Facebook.

Anastasia did receive at least two vaccines according to the mother’s social media. 💉

MUST SEE: @BlackHannity and the Project Veritas team hit the streets of Manhattan yesterday with an LED box truck to get the public's reactions to our @pfizer investigation -- and of course, the police were called! Enjoy.