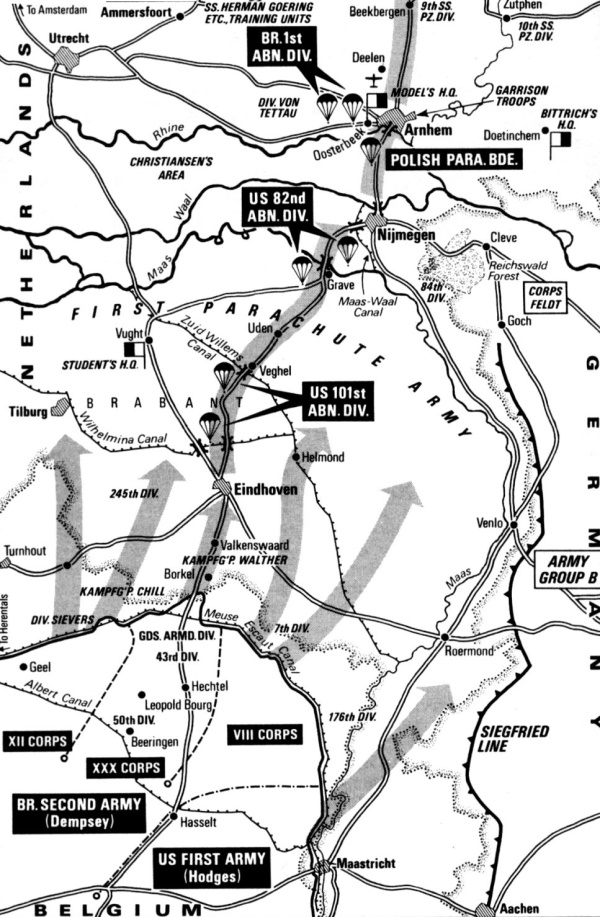 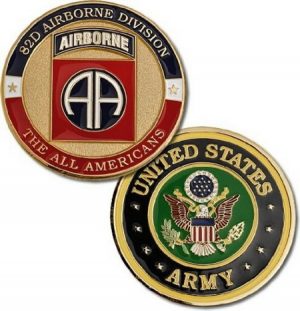 By the early fall of 1944, the Allied Armies were suffering a serious handicap to the continued rapid advance along the Western Front in that they were badly in need of supplies, and no Army was capable of making a sustained offensive. This situation had developed because the Seaports serving the Armies were so far to the rear that the supply lines could not adequately carry the tremendous burden required. The Armies needed to plan and execute a decisive offensive or the war would go on into the summer of 1945, and thus give the Axis leaders the time they desired to recover from their losses and improve their defenses or negotiate a better peace.

Confronted with these conditions the Allies devised a plan to deliver the final blow on the Axis. This plan was designated as Operation Market Garden, Operation Market was the airborne phase and was to be coordinated with the ground effort. All armies on the Western Front would halt their advance for the time being, except the UK 2-A which would receive all supplies that could be adapted to its use and prepare for an all-out effort. The UK 2-A, in conjunction with the US 1-AA/BA, would advance from a line generally along with the Albert Canal and the Escaut Canal in Belgium to the Zuider Zee in Holland in an effort to cut off the German armies in Western Holland. The Allies could then strike around the northern end of the Siegfried Line, straight into Germany, and eliminate the tenacious task of making a frontal assault through the Line. The advance would be along a narrow front, following one road through Eindhoven, Grave, Nijmegen, Arnhem, and Apeldoorn, and spearheaded by the UK XXX Corps with the US VIII Corps on the right and the UK XII Corps on the left, advancing more slowly on the flanks.

The UK 1-A/B, together with the PL 1-PPB were to capture the bridges at Arnhem. In each case, the surrounding area was to be held until the Guards Armored could effect a junction, and then the airborne troops were to protect the sides of the corridor. The UK 52nd (Lowland) Division (Air Portable) was to come into the Arnhem area as soon as an airstrip could be prepared by the A/B Engineers. The mission of the US 82-A/B specifically stated that the high hill mass in the Groesbeek area would be seized, organized, and held. This is the highest ground in all of the Netherlands. The Commanding General of the US 82-A/B (Gen James M. Gavin) was directed by the Corps Commander that all other missions, would be accomplished before the seizure of the Nijmegen Bridge was attempted.

On Sept 16, 1944, the US 82-A/B closed at airfields in England 24 hours before take-off time. Last-minute briefings and equipment checks were made of all personnel, bundles, and aircraft. Starting at 0950 Sept 17, the Division took off for the flight to Holland. The flight took approximately three hours, the first serials landing at the drop zones at 1250. All units landed on their prescribed drop zones with, the exception of the 2/505-PIR, which was dropped two thousand yards northeast of its scheduled drop zone. Following the drop, all the units reorganized and moved to their assigned objectives while eliminating the local enemy resistance, and by 2300 hours the initial missions had been accomplished. The US 504-PIR had dropped west of the Meuse-Waal Canal on three separate battalion drop zones. One battalion captured the bridge at Heuman and two bridge sites near Blankenburg and Hatert, the bridges at these sites having been destroyed by the enemy before to the arrival of the troops. One battalion cleared the western sector of the division area of all enemies and blocked movement on the Grave-Nijmegen highway. One battalion had dropped troops on either side of the Meuse River at Grave and both forces moved against the bridge, capturing it at 1430. The town of Grave was abandoned by approximately 400 enemies and occupied at 2300. 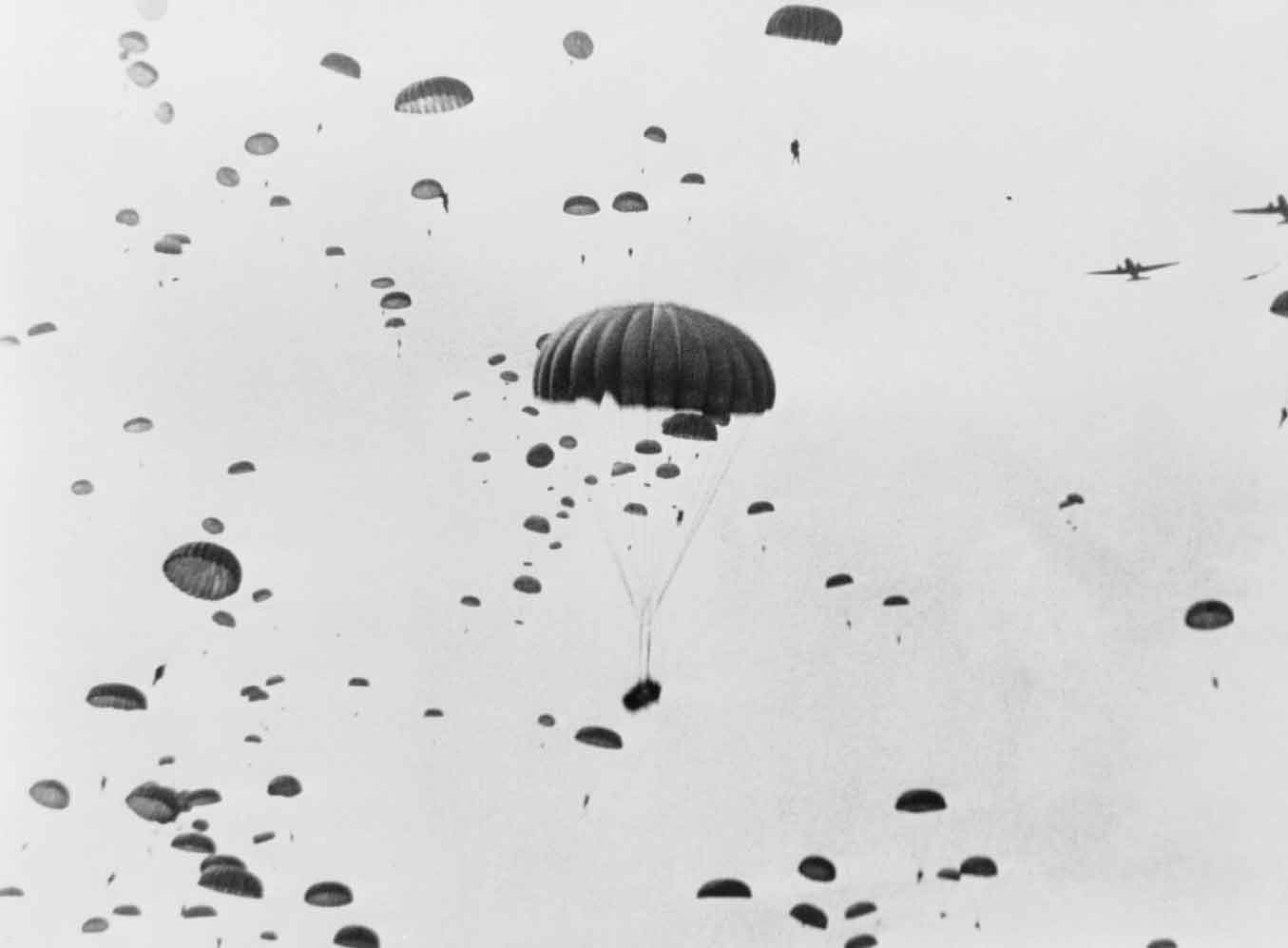 The US 505-PIR dropped on drop zones in the vicinity of Groesbeek, seized the town, and cleared all enemies from its area. Contact with the US 504-PIR was made on the bridge near Heuman. The US 508-PIR dropped on drop zones northeast of Groesbeek and upon receipt of information from the Dutch underground that the town of Nijmegen held few troops, moved to take the Waal River bridges. Their attack was stopped by heavy enemy resistance about 400 yards from the highway bridge and the regiment established roadblocks to prevent any movement to the south. One company encountered considerable enemy resistance in clearing glider landing zones in the area northeast of Groesbeek.

D+1 found the US 504-PIR and the US 505-PIR conducting vigorous patrol activities, capturing additional secondary bridges over the Meuse-Waal Canal and disrupting enemy communications. Easy Co 505-PIR captured a train loaded with supplies and personnel trying to escape into Germany. Because of strong enemy resistance being encountered by the company previously sent to clear the glider landing zones northeast of Groesbeek, the US 508-PIR withdrew one battalion which had been in the town of Nijmegen, to assist in this mission.

Complete surprise was effected and the landing zone was secured by 1400. At 0900 one company again moved into Nijmegen and was stopped by the enemy upon reaching the same area in which the regiment had been stopped the day before. Furious fighting raged through the day and at 1500 the company was withdrawn to the vicinity of Berg en Dal. During the morning, 450 gliders were lifted from bases in England and towed to the landing zones in the vicinity of Groesbeek. This lift was made up of one AT battery of the 80-A/B-AAA, 319-GFAB, 320-GFAB, 456-PFAB, and the 307-A/B Medic Co. The glider recovery was quite satisfactory even though several gliders overshot the landing zone and landed in enemy territory across the Dutch-German border. The arrival of the artillery battalions was indeed a welcome sight and they were immediately put into action, one battalion being put in direct support of each of the Parachute Regiments.

On D+2 contact was made with the UK Guards Armored Division by the US 504-PIR at Grave. This regiment, less 3 of its companies, left to guard the bridges at Grave, Heuman, Heninghute, and to patrol the highway from Grave to the Heninghute bridge, was moved east to the Meuse-Waal Canal where they relieved the 2/508-PIR. One battalion was placed in division reserve. The US 505-PIR, less the 2/505 continued to hold its sector in the south of the division area, conducting extensive patrol activities throughout the day. The US 508-PIR seized high ground along the Nijmegen-Cleve Highway between Ubbergen and Wyler, establishing roadblocks at these points in addition to those at Beek and in Thal. Repeated vicious counter-attacks against positions in Teufels Berg during the course of the day were repulsed. 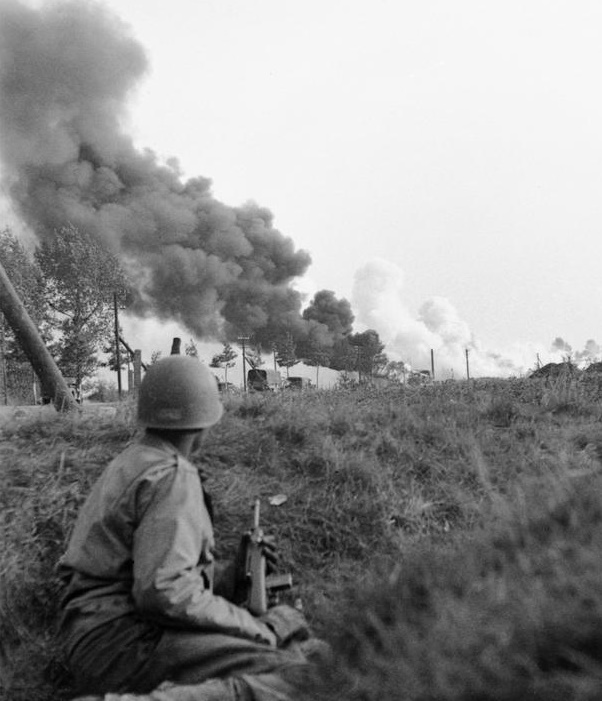 And here we go

This is what’s known as “giving aid to the enemy”

7 February 1921 | A Polish woman, Irena Kowalska, was born in Nowa Słupia. She was a farmer.

At least the feds should get tested for the drugs they make illegal for everyone else.

Kamala: “Our meeting today includes...working together to talk about how we can measure the success we’ve had thus far…to help us articulate the metrics by which we will then measure our success in real-time.”