Ducument Source: Operations of the 1st Battalion, 506th Parachute Infantry Regiment, 101st Airborne Division during the period of June 6, 1944, to June 8, 1944, in Carentan and in the vicinity, Normandy, France. Personal Experience of a Company Commander. Maj Knut H. Raudstein 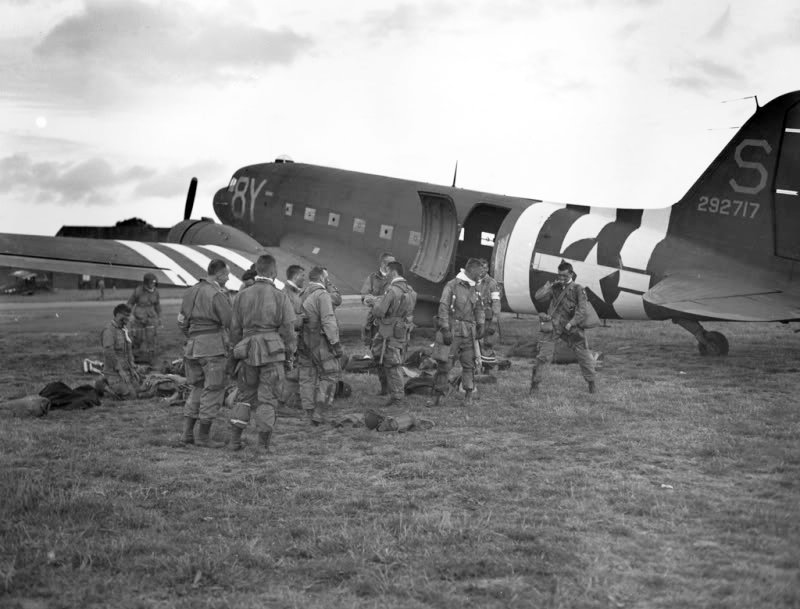 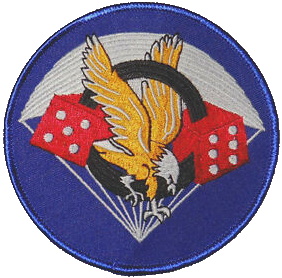 The operations of a Parachute Battalion in the Normandy Campaign is an unusual subject for military study for several reasons. (1) The missions assigned to the airborne units participating in the campaign were successfully accomplished despite an initial operational fiasco. (2) The pré-invasion prediction of Air Chief Marshal Leigh-Mallory that the operation was so hazardous that it was doomed to failure was not confirmed. (3) while the Normandy Campaign entailed the first large-scale use of airborne troops, the actual number of troops seizing the objectives was relatively small. So, this archive is about the operations of the 1st Battalion, 506th Parachute Infantry Regiment, from D-Day to D+2 in the seizure of a beachhead on the Cotentin Peninsula near Carentan, Normandy, France, during the Normandy Campaign in June 1944. The operations of this battalion can be considered typical of the other participating parachute battalions. Its esprit de corps was high; its pré-combat training had been intensive; its troops were properly imbued with the will to close with and destroy the enemy, and its missions were accomplished with similar difficulties and degrees of success. 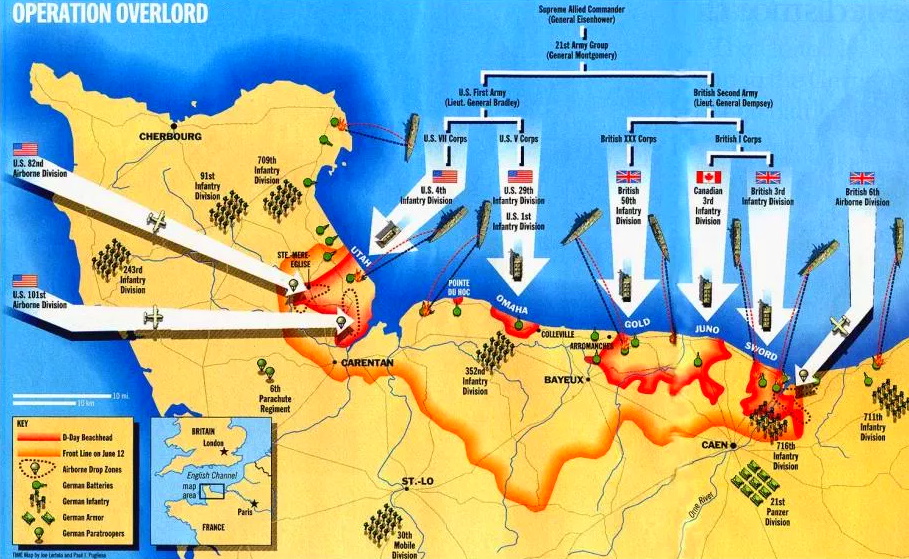 The seizure of the Cotentin Peninsula and the port city of Cherbourg was of vital importance to the success of Operation Overlord, the plan for the invasion of western Europe. Drafting of the operation had begun in the summer of 1943 when the Germans had been driven out of Africa and the assault in Italy was progressing as planned. Troops and supplies had been built up in England to permit a major campaign designed to cross the channel, establish beachheads for the unloading of troops and logistical support, and secure ports for the more efficient movement of battle impediments. The general plan envisaged the employment of five assault beaches, three in the British-Canadian sector to the east, and two in the American sector to the west. Two American Airborne Divisions (82-A/B and 101-A/B) and one British Airborne Division (6-A/B) were available in addition to the Seaborne troops. It was determined that the two American divisions would be employed in the rear of the western beaches to facilitate the early capture of Cherbourg. Two terrain features that dominated the area of operations prescribed the majority of the initial objectives for these two divisions.

Terrain of the Cotentin

The Douve river is the dominating feature of the Cotentin Peninsula. Its course is generally to the southeast, winding through a wide flat valley and emptying into the English Channel north of Carentan. A lock near Carentan was believed to control the drainage of this valley, and it was thought that the force holding the lock could flood the valley, thereby restricting traffic into the peninsula to a few bridges. The westernmost assault beach, given the code name of Utah, was a wide, flat, sandy beach that was dominated by a high ground about a thousand yards inland. Between the beach and the high ground was a strip of low, marshy ground which air photos revealed to be inundated. This area was traversed by four causeways, which could be easily blown or obstructed, and was defended by a system of entrenchments, pillboxes mounting tank turrets, and concrete gun emplacements, all of which gave interlocking fire with adjacent positions. Thus the terrain dictated that the look to the north of Carentan, the bridges across the Douve, and the high ground dominating the four beach exits be quickly seized to permit the unrestricted use of the beach and to prevent the enemy from moving his reserves into the beachhead. In addition to these, the disposition of enemy troops demanded that one other objective be secured. 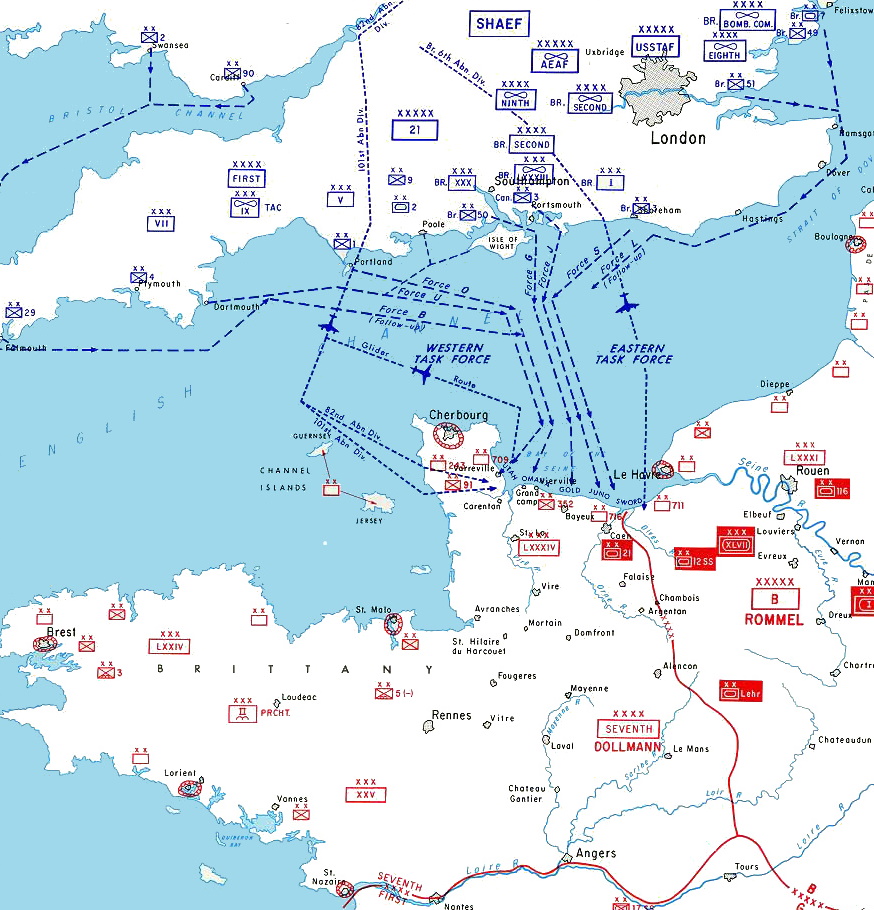 On the high ground dominating the northern part of the beach was an emplaced coastal battery which commanded the entire beach. The reduction of this position and the capture of the troops manning it was another mission given to the airborne force. Elsewhere on the peninsula, intelligence reports indicated that the 79.Infantry-Division and the 243.Infantry-Division were disposed along the east and west coasts respectively. Shortly before the invasion, additional intelligence revealed that the 91.Infantry-Division had also moved into the Utah Beach area. The enemy was believed capable of rigid defense of the beaches by the 79.Infantry-Division supported at adjacent divisional areas. Other divisions occupied the areas around the landing zones, including the 243.Infantry-Division (Static) (Gen Heinz Hellmich) comprising 2 battalions of the 920.Infantry-Regiment (921.Infantry-Battalion and 922.Infantry-Battalion), a coastal defense division that protected the western coast of the Cotentin Peninsula and 2 regiments of the 711.Infantry-Division, (Static) (731.Infantry-Regiment and 744.Infantry-Regiment) which defended the western part of the Pays de Caux. The 30.Schnelle-Brigade (Col Freiherr von und zu Aufsess), comprising three bicycle battalions was also localized in the area. 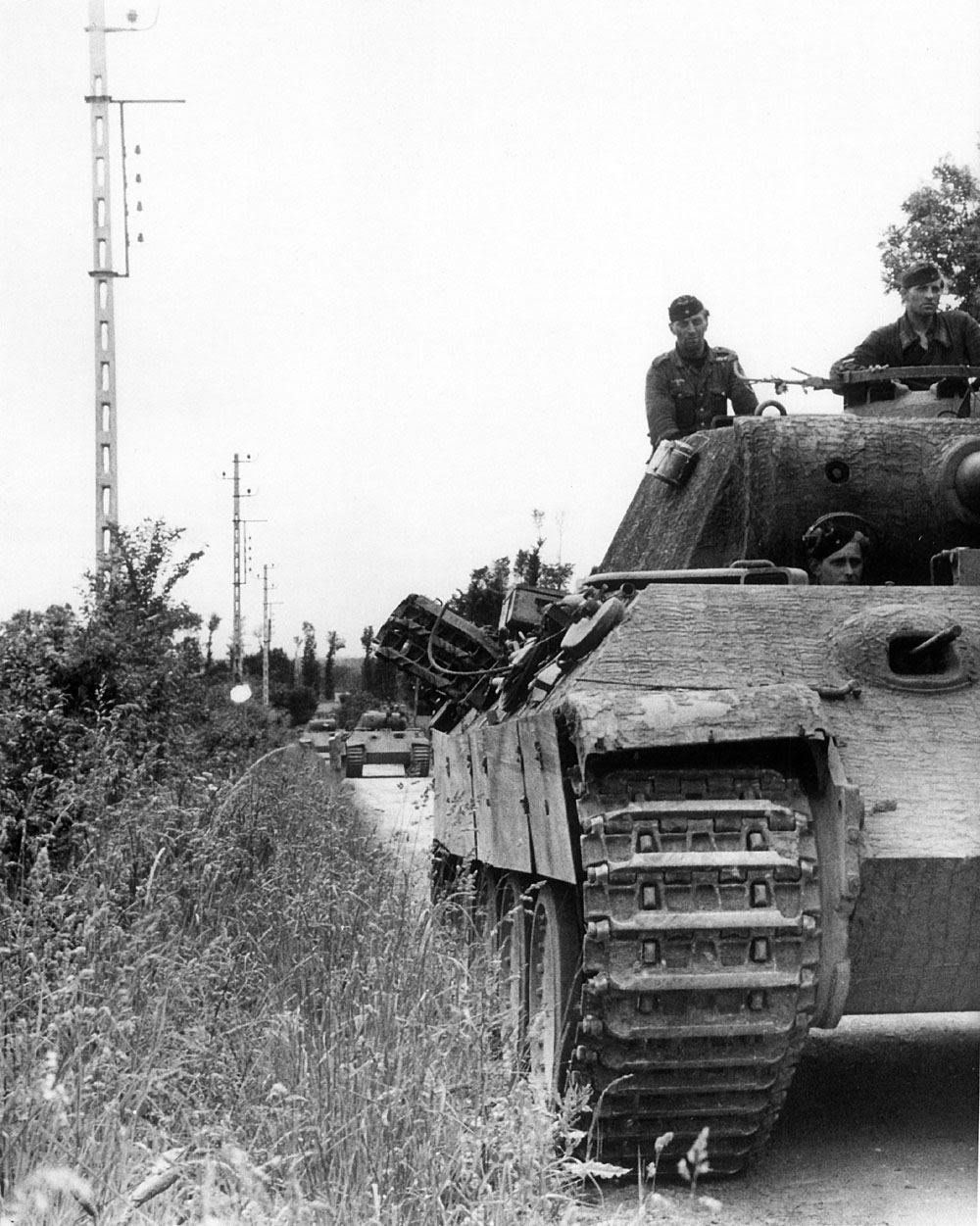 Rommel’s defensive measures were also frustrated by a dispute over armored doctrine. In addition to his two army groups, von Rundstedt also commanded the Hqs of the Panzer Group West (Gen Leo Geyr von Schweppenburg). This formation was nominally an administrative Hqs for von Rundstedt’s armored and mobile formations, but it was later to be renamed 5.Panzer-Army and brought into the line in Normandy. Von Geyr and Rommel disagreed over the deployment and use of the vital panzer divisions. Rommel recognized that the Allies would possess air superiority and would be able to harass his movements from the air. He, therefore, proposed that the armored formations be deployed close to the invasion beaches. In his words, it was better to have one panzer division facing the invaders on the first day, than three panzer divisions three days later when the Allies would already have established a firm beachhead. Von Geyr argued for the standard doctrine that the panzer formations should be concentrated in a central position around Paris and Rouen, and deployed en masse against the main Allied beachhead when this had been identified.

The argument was eventually brought before Hitler for arbitration. He characteristically imposed an unworkable compromise solution. Only three panzer divisions were given to Rommel, too few to cover all the threatened sectors. The remainder, nominally under Von Geyr’s control, were actually designated as being in the ‘OKW Reserve’. Only three of these were deployed close enough to intervene immediately against any invasion of northern France, the other four were dispersed in southern France and the Netherlands. Hitler reserved to himself the authority to move the divisions in OKW Reserve, or commit them to action. On June 6, many panzer division commanders were unable to move because Hitler had not given the necessary authorization, and his staff refused to wake him upon news of the invasion. 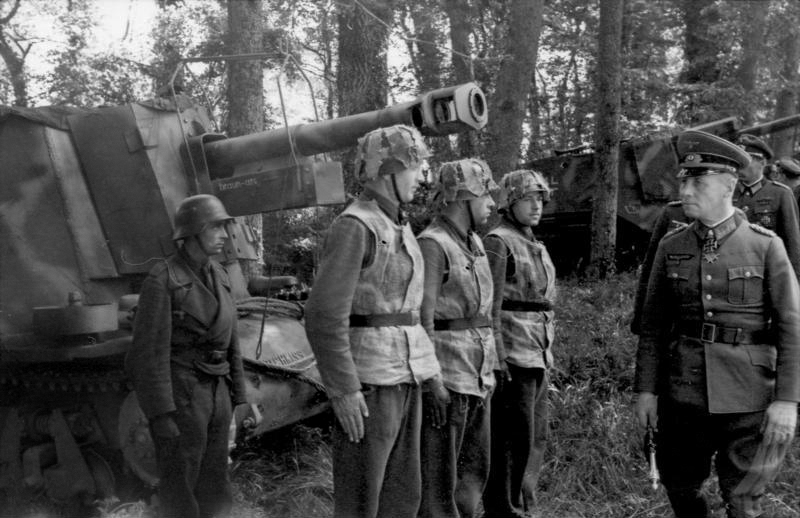 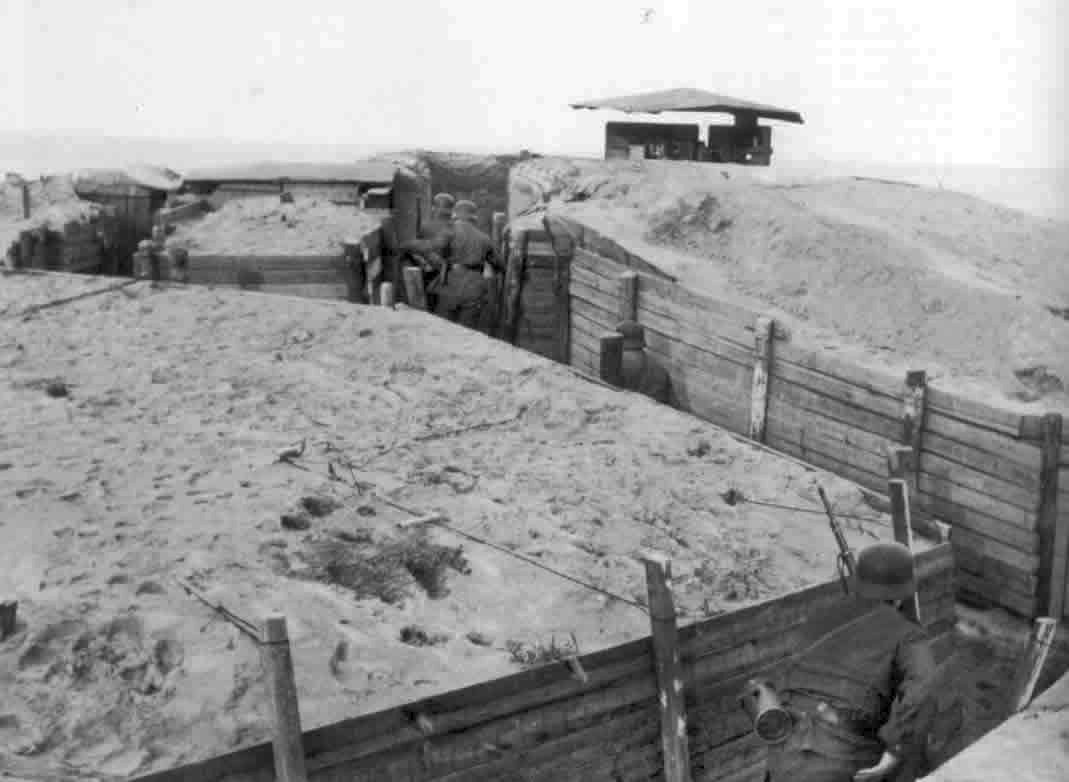 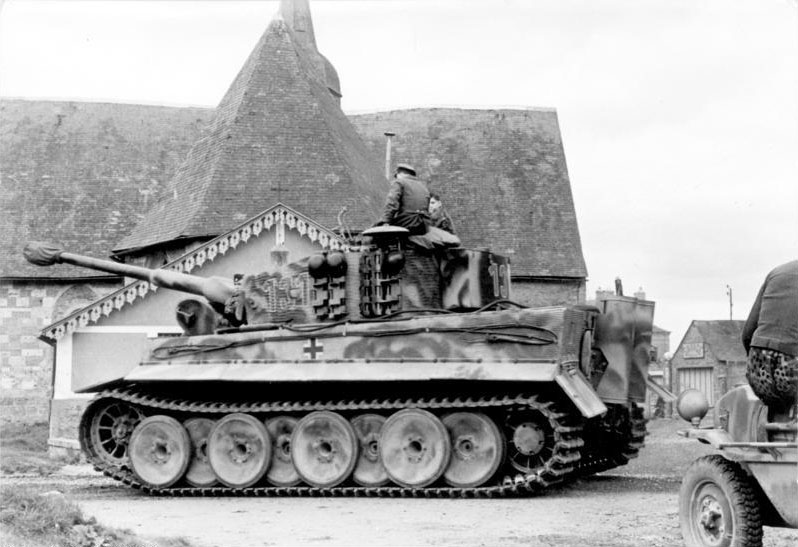 The 21.Panzer-Division (Gen Edgar Feuchtinger) was deployed near Caen as a mobile striking force and as part of the Army Group B reserve. However, Rommel placed it so close to the coastal defenses that, understanding orders in case of invasion, several of its infantry and antiaircraft units would come under the orders of the fortress divisions on the coast, reducing the effective strength of the division. The other mechanized divisions capable of intervening in Normandy were retained under the direct control of the German Armed Forces HQ (OKW) and were initially denied to Rommel. 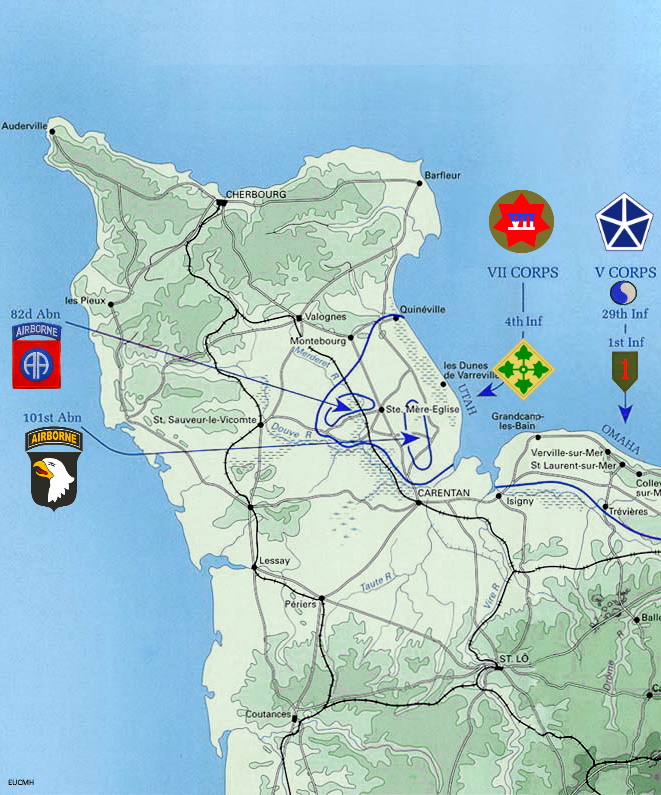 The mission of the VII Corps, as indicated in Field Order No. 1, dated May 28, 1944, was quite simple: VII Corps assaults Utah Beach on D-Day at H hour and captures Cherbourg with minimum delay. The 101-A/B was assigned to this Corps with the general mission of landing in the rear of the beach, securing the beachhead from the north, preventing the movement of enemy reserves into the south flank of the Corps along the Douve River, seizing the high ground in rear of the beach, and making contact with the 82-A/B to the west. The division plan called for the initial employment of its three parachute regiments in the seizure of the division objectives, to be later supported by the glider regiment which, due to the scarcity of planes, would have to arrive by sea. The 506-PIR was given the mission of seizing the two southern beach exits,

destroying all lines of communication in its zone, particularly the underground cable connecting Carentan and Cherbourg, the seizure of two wooden bridges across the Douve between the look and the sea, and establishing contact with the 501-PIR which was to seize the lock and the bridges leading into Carentan.

The regimental plan prescribed the use of two drop zones and assigned the mission of seizing the beach exits to the 2/506, the seizure of the bridges to the 3/506, and the severance of the Carentan – Cherbourg cable to a platoon of the 1/506, which was to remain in regimental reserve. The 1/506 was given another platoon mission, that of demonstrating to the south of the village of St Marie du Mont while the 2/506 marched around the north of the town en route to the beach exits. Drop Zone C was assigned to the 1/506, the 2/506, and the Regimental HQs. Drop Zone D was assigned to the 3/506.