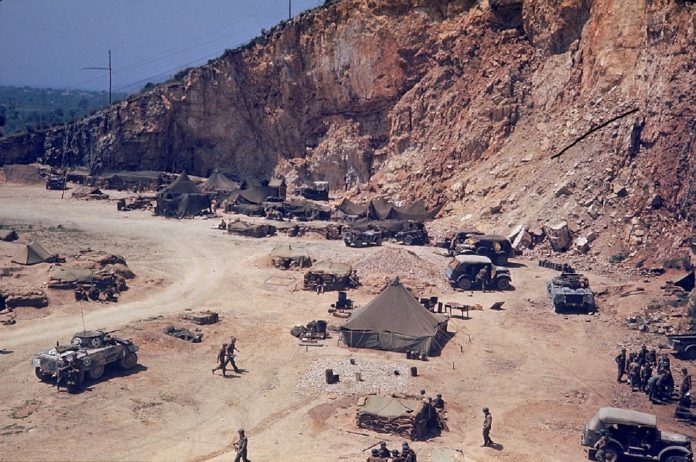 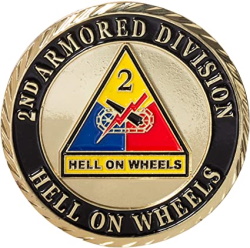 Concentration for Husky
Concentration, April 22 to July 22, 1943. Pursuant to orders CG, IAC, the 2-AD moved from Rabat, French Morocco to the vicinity of FAITC (Fifth Army Invasion Training Center) located in Oran, Algeria (Port aux Poules), by rail and motor beginning April 22 and closing May 22. An average train density of 2 500-ton trains daily was allotted to the division for the move. Track vehicles, except lightly loaded H/T, moved by rail from Port Lyautey, and all other vehicles moved overland. Car crews and necessary command groups moved with their respective commands by rail or road. This movement was made without incident except for that shortage of rail equipment, the interruption of rail service for two days by flash flood near Meknes, Morocco, and heavy traffic both rail and road delayed the concentration. 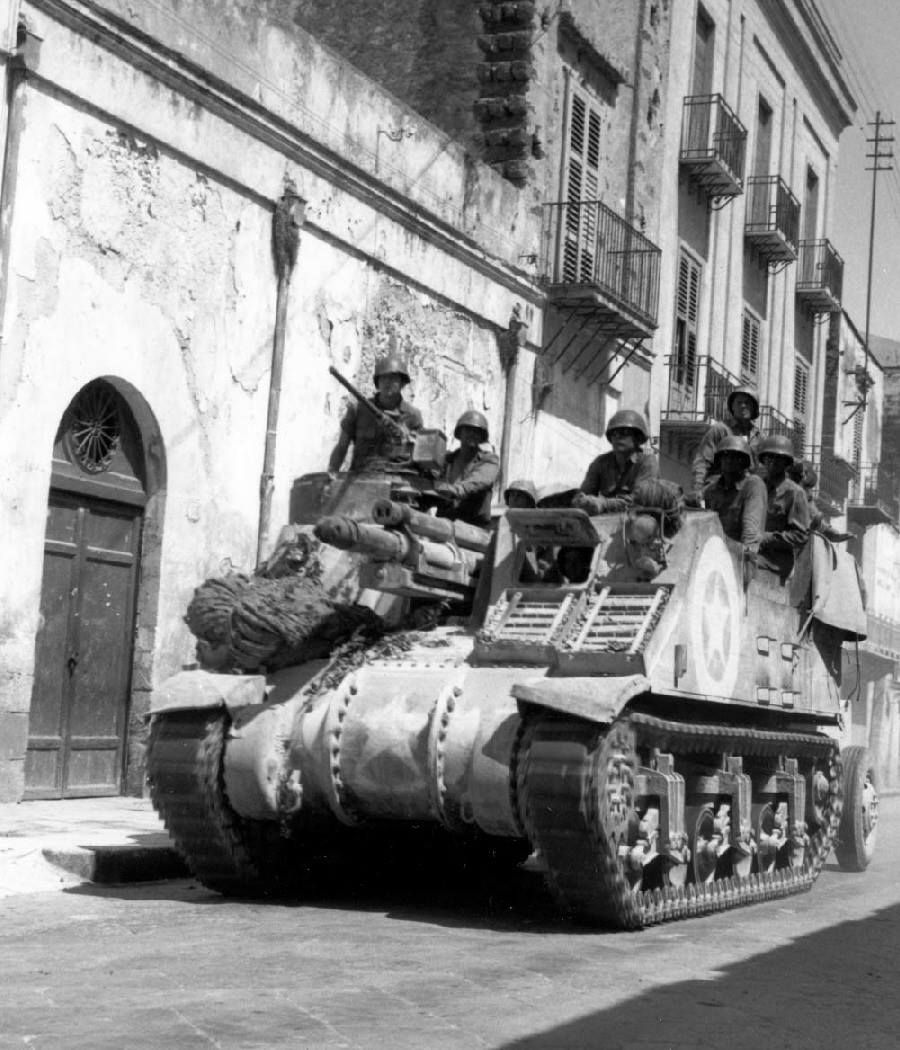 Training for Husky
(A). During the period of May 16 to June 19, intensive physical hardening training was conducted which included violent exercises, calisthenics obstacle courses, rope climbing, forced road marches, etc. All guns were test-fired, and tactical exercises using ball ammunition were conducted. Amphibious training utilizing the facilities of the FAITC included instruction and practical work in waterproofing vehicles, loading various types of craft and ships, and landing exercises.

(B). Difficulties were experienced with the unloading of the LST’s and LCTts since the draft of these vessels was not suited to the gradient of the beaches in the vicinity of Arzew. Considerable lost of time resulted while various types of equipment for unloading LST’s were tried out under the direction of the Navy and FAITC. The final solution of unloading LST’s was to use LCT’s with sides out and transhipping the vehicles, an unsatisfactory solution at the best, slow and laborious in a calm sea and a most difficult task in the dark or with a sea running. Little attention was paid to this practice loading by Naval officers

except by very junior officers, and no comments were made concerning the weight limitation of the LSTs.

C. A practice landing was conducted on June 17 to June 19 which was intended to be a full-scale rehearsal. Elaborate preparations were made along the selected beach, such as wire, obstacles, enemy in position with flares, ammunition, etc. Secrecy as to hour and place of landing was maintained until the convoy put out to sea. Due to the lack of shipping, only approximately 80% of the assault units and about 75% of the armored vehicles could participate. This excluded troops of vehicles on the two troop ships, the seven Liberty type store ships, twelve LCIs and fire LCTs. This exercise had considerable benefit to those who participated but due to the relatively small scale of the operation it was of limited value to the division as a whole.

Loading for Husky
(A). June 13 to July 5. Concurrently with the above. training equipment was prepared for shipment, vehicles were waterproofed, ships and craft loaded in accordance with the mounting schedule prescribed by the 7-A.

(B). Inspection of ships and craft indicated generally insufficient AAA protection. To overcome this, organic weapons of the division were loaded on decks with favorable locations to completely cover respective ships. These guns were included in the AAA Artillery protection of the ship and were fired under the supervision of and at the direction of Naval gunnery officers on board. 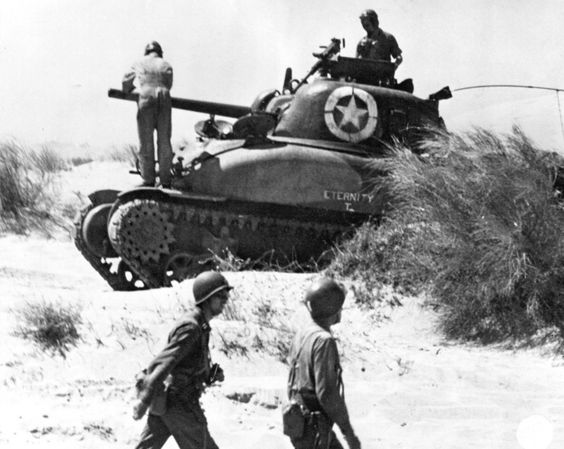 Secrecy for Husky
(A). All loading of personnel, except for small details, was accomplished at night. Necessary mass personnel, ships guard, billeting parties, advance CPs, etc, were brought to the ships’ side in small groups so as not to attract attention to loading being conducted.

(B). The vacated bivouac sites were taken over by personnel remaining behind and in construction of dummy tents and other installations, so as to present a picture of an unchanged bivouac. This rearrangement of the camp was accomplished under cover of darkness and concurrently with the departure of troops being loaded.

(C). A signal detachment with a comparable number of radios to those of the 2nd Armored Division was installed prior to the loading dates and took over all radio traffic of the division so as to present unchanged radio activity.

(D). All plans and orders in connection with this operation and loading were kept in a locked room under guard to which only officers classified for the purpose had access. Orders necessary to accomplish the loading and essential advance planning were issued to subordinates without explanation or discussion of the operation. 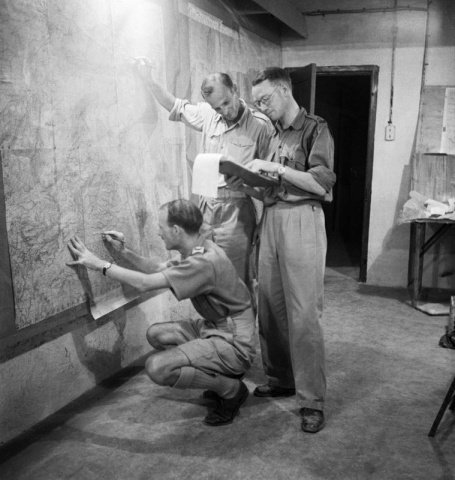 Husky – Sea Trip
(A). Due to convoy requirements the landing craft type vessels, 23 LCIs transporting the 18-RCT, 5 LSTs transporting the armored elements of Combat Command D and advance elements of the 540th Engineer Combat Battalion, 7 LCTs transporting the 540th Engineer Combat Battalion and the armored vehicles of Combat Command B, left Azrew on June 24 to rendezvous off the Tunis and Bizerte areas. They departed from Bizerte on July 8. LSTs assigned to armored units had been loaded exactly as they were loaded in the various exercises of June 27, varying in the payload from about 600 tons to about 850 tons. On July 3, nine days after the departure of these craft from Arzew and five days before their sailing date, orders were received from the Navy to reduce the weights to 500 tons each. This would have reduced the tank strength of the Kool Force to about one company of medium tanks. This separation from the rest of the division necessitated the transmission of any last-minute instructions to them by courier. Three such trips were required due to changes in the situation. No contact other than this courier service was established with these craft until the arrival of the convoy off Gela in Sicily on DDay when radio contact was established.

(B). Seven Liberty ships carried a considerable portion of the combat and administrative vehicles of the Kool Force in addition to essential ammunition, gasoline, and rations for the operation. These ships departed from Oran on July 5 with the troops’ ships but due to convoy requirements left that convoy. They rejoined the Kool Force off Gela on D+1.

(C). Two troops ships transporting the Kool Force HQs, Combat Command B, HQ, and crew for combat vehicles (being carried in Liberty ships and landing craft) departed Oran on July 5 and arrived off Gela with the assault force on D-Day. 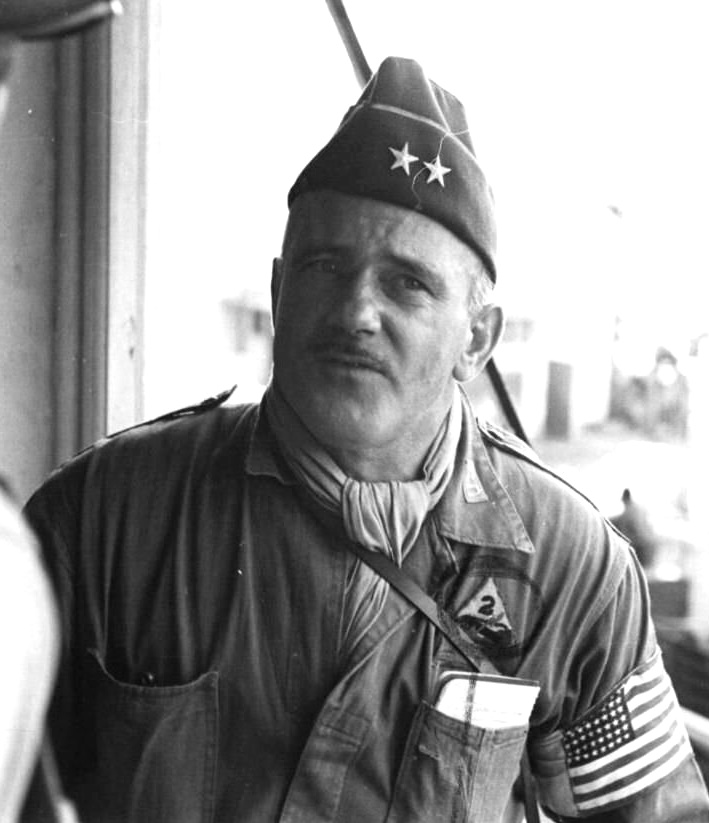 Husky – Debarkation
Constant and close liaison was maintained with the Navy during the preparation of plans and orders. Orders, as issued, were in every respect in accord with the Naval operational orders. On arrival off Sicily, however, several instances occurred which materially delayed the landing.

(A). Small crafts were not manned by sufficiently trained or responsible personnel. Numerous examples were noted where boats failed to come alongside in response to orders, land as directed, or return to the proper ship for reloading. In many instances, Army Commanders ashore searched up and down the beach for these crafts and redirected them on their mission. It appeared that the small crafts were used entirely at the will of the operators and so, there was no control over these vessels. It is believed essential that these crafts be operated in small groups each under the control of a responsible Naval officer. Adequate communication between boat group commanders and individual LCMS, LCVPs, and LCTs, must be provided. This control must tie the beach master to the boat group commander as well as the controlling Naval authority afloat. Orders given in many cases by the beach master were not obeyed by small boats. 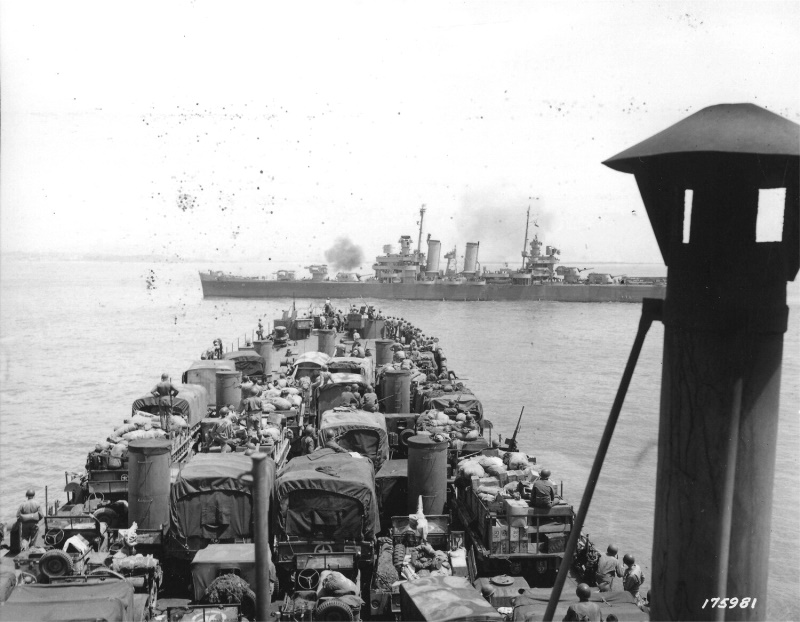 (B). On receipt of orders to land, information was received from the Naval command that LCIs were at that time in cruising formation and not the planned landing formation. It being impracticable to weigh anchor, maneuver out to sea, and assume the proper formation, it as decided to debark the 18-RCT from the cruising formation of the ships and reorganize troops into attack formation on the shore.

(C). The plan for the debarkation of the troops and vehicles contemplated the transfer of car crews from troops ships to the store ships at sea, so as to permit the landing of the vehicles with their operating crews. The store ships arriving in the transport area the day after the troops’ ships carrying car crews made this plan impractical and the troops were landed separately. This complicated the assembly of the command ashore.

(D). Landing operations were difficult due to the high surf that was running and the almost continuous enemy action by long-range artillery fire, aerial bombardment, and strafing. 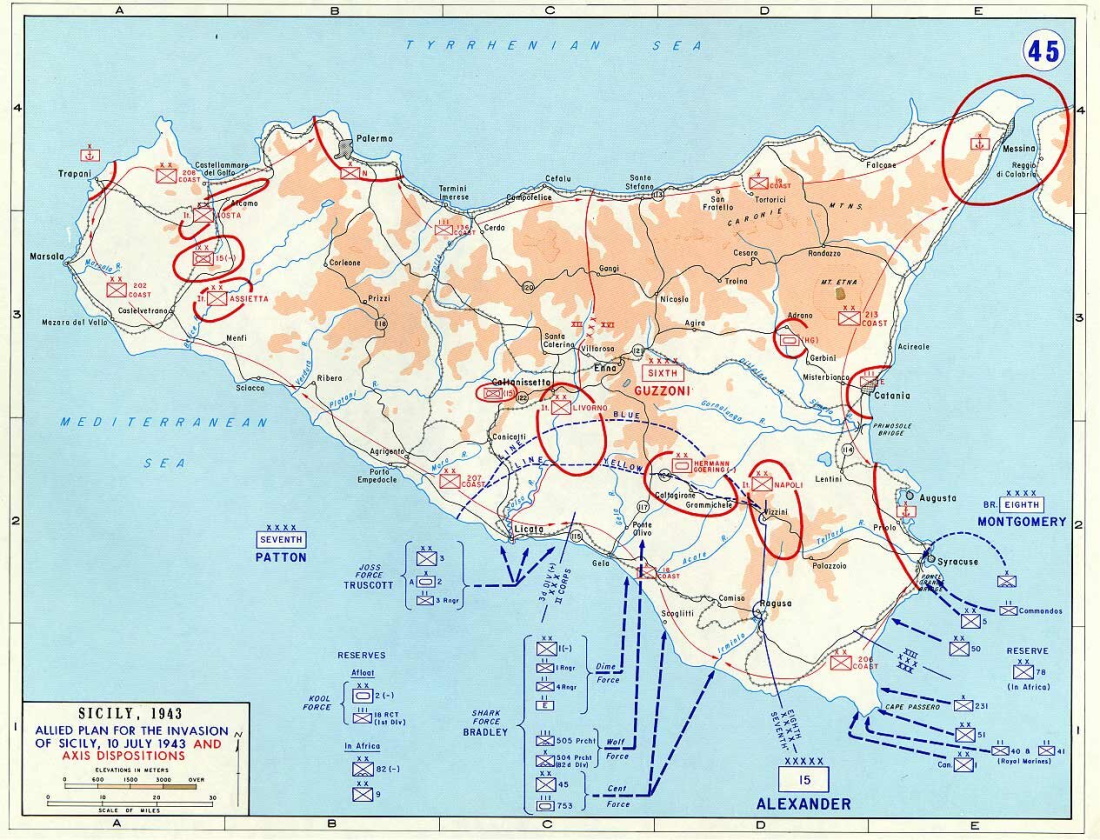 Robert Couper was born at a farm in #Wigtonshire, #Scotland on 22d September, 1750. In 1769 he entered as a student at university of #Glasgow, but his parents having died, and left him little or nothing, he accepted of a job as tutor on visit to a family in #Virginia, #America

I long for the day that government offices just do their jobs,, where politicians do their main job. Where #PMQs is a discussion on current policies not a shit show of denial’s, where the government represents the people, where kids aren’t fucking hungry and OAPs don’t 1/

They fear i will awake with all of the information and you all get bored and tired before that. To take the power and authority away from evil and corruption is new and hard for them to understand, my death means more than my life

The moving finger writes; and, having writ, moves on: nor all thy piety nor wit shall lure it back to cancel half a line, nor all thy tears wash out a word of it.

I shouldn't be greedy let's face it in the last year I've been able to enjoy this small pleasure at least 42 times.

Very disappointed that I won't get to partake in my favourite Westminster sport this week of watching Tories try to look casual in the tearoom like they don't care on reshuffle day. Goddamn sickness.

The thing this World is starting to figure out is War gets us nowhere and when you are in war a death is just a death. It can be made part of the War. The thing with this journey, is my death will stand for more than if they just leave me alone.